Planet culture system - Any way to put a country name into a **tooltip** dynamically?

Menu
Install the app
You are using an out of date browser. It may not display this or other websites correctly.
You should upgrade or use an alternative browser.
Stellaris 43233 Bug Reports 23348 Suggestions 13303 Tech Support 2209 Multiplayer 330 User Mods 4154 Stellaris AAR (After Action Reports) Console edition 953

So I've written up the basics of a dejure territory or planet culture system, which will track current owners + former owner of a world (and if I can work this out for 3.0 upto the last 5 owners of a world) + their holding period
Essentially I can say something like: 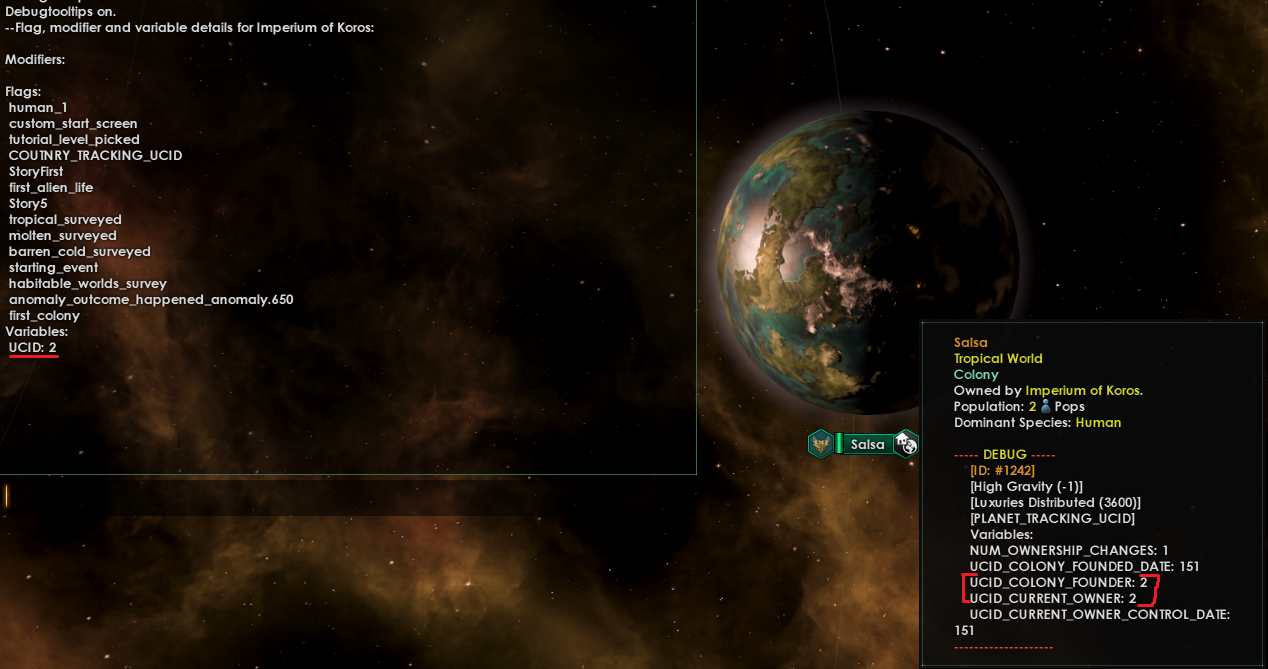 These can be used to compute planet loyalty to one empire or another, so after you annex a world
Or this can even drum up separatism turning the planet into a "march" world - a world that has seen so much bloodshed (by having too many owners in a short time period - a few decades) it doesnt want to be allied to any great empire until this cools off and will aggressively resist any outside force.
And this all works - more or less, its a bit hackish with the 2.8x scripts (cant wait for those variable scripts in 3.0, even if it means rewriting the 5 pages ive written today).

My real issue is in presenting this in the UI.
I know, with a bit of work, I could create an event window that fires whenever you activate a planet decision ("GIVE ME PLANET INFO NAO") and prints this out for the player to read (Get Former Owner UCID, Search all countries till you find the empire that matches up with the code, print its name - fallback = "A lost Empire" if that country is dead).
But using a popup is clunky and means doing "Decisions > GIVE INFO" regularly for updates. A better way would be to contain this all in a special tooltip in a planet modifier on the main planet screen, so you just mouse over the "Planet Info" modifier and read the tooltip.

There is only one planet modifier I know of that can read another nation's name (or even get its flag) and print it in a tooltip. The occupation modifier. I also know its possible to make custom tooltips for events

Code:
So there must be a way to do this... I'm trying to copy how the planet occupation code works, but it doesnt seem to exist anywhere in the game files?

Literally all I find on it is a "Country" Variable [ $ |Y$ just sets the font colour to yellow] in the localisation files (and a static modifier that isnt useful to me).
But no scripts or files that say how it figures out that country or scopes to it? Or even how it dynamically grabs its flag?

After wasting a few hours on this, I think i'll have to shelve it, it feels like the scopes just arent set up the way I'm imagining they are for planet static modifiers, no matter what combination of strings I try I cant get it to print a variable name, variable value or even a flag / dynamic flag (i.e. TEXT@SOMETHING). 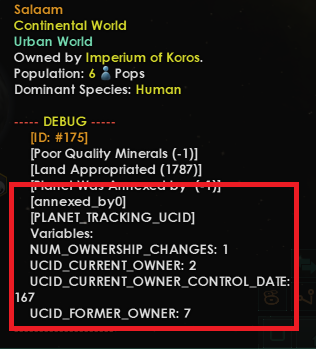 Maybe i'll take another go at this in 3.0 saw some localisation changes in a DD.

You could use decisions to create a popup and show all data there. In 3.0 you also can use planet specific effectbuttons, which itself can use dynamic text, so then it definitively is possible, but not very compatible to other mods

Persepheus said:
You could use decisions to create a popup and show all data there.
Click to expand...

Yeah thats what I was trying to avoid as I can imagine burying things may get annoying fast. I definitely dont want to edit the UI, I use the UI scaling mod and would hate to have to support a compatibility patch lol. I could try Hard-binding it to a key. E.g. you click on the planet and hit, say, Left Alt, and the popup triggers that way. I imagine thats possible but never tried setting a modded binding.

I think the best bet is to create a coloured scale for a generic loyalty planet modifier, like the below, that simply handles the debuffs and says "X% of this planets' population remains loyal to its former owner" - and have extra details buried in a popup in the decision menu. That way at least you know at-a-glance the planet hates you, and you can find out who it prefers if you need to by looking in decisions. 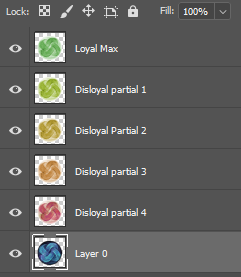 Pancakelord said:
Literally all I find on it is a "Country" Variable [ $ |Y$ just sets the font colour to yellow] in the localisation files (and a static modifier that isnt useful to me).
But no scripts or files that say how it figures out that country or scopes to it? Or even how it dynamically grabs its flag?
Click to expand...

That information is probably generated and then forwarded by some other part the engine specifically to create this modifier, not grabbed by the modifier-code itself.
So it's likely not possible to recreate the effect for other contexts.

Overall, the inability to create dynamic tooltips is indeed very annoying. With the changes to variables in 3.0, it's really the last barrier to a world where we can create dynamic gameplay systems and display them in a way that feels like they're a natural part of the game. I don't think 3.0 changes anything about this, but with the many improvements to modding that are coming with this patch (and really the ones we already had in the past - Stellaris is FAR better in terms of modability than it was in the past), I'm hopeful that this issue too can be addressed in the future.
Last edited: Apr 15, 2021
Reactions:

Ryika said:
That information is probably generated and then forwarded by some other part the engine specifically to create this modifier, not grabbed by the modifier-code itself.
Click to expand...

Yeah I came to that conclusion in the end too, the game seems to track 2 distinct properties: Planet Owner & Planet Controller
I imagine there is some tiny check buried in the executible that says if 1 =/=2 do that occupation modifier.

Ryika said:
Overall, the inability to create dynamic tooltips is indeed very annoying. With the changes to variables in 3.0, it's really the last barrier to a world where we can create dynamic gameplay systems and display them in a way that feels like they're a natural part of the game. I don't think 3.0 changes anything about this,
Click to expand...

I did see a few small comments in the DD about tooltips but yeah probably nothing substantive for this. The biggest benefit are probably button changes and the like, being able to create interactive menus could be a high-effort work-around. With how the files are set up, it should be possible to make "stand-alone" menu elements that dont clash with the vanilla UI or modded UI in any appreciable way (without using edicts or decisions to open them).
Toggle signature
Mods: Leafless Plantoids (Replacer) * Cleaner Occupation Markers
Suggestions: Connect favours to more game-systems * Hivemind civic: Spore Warriors * Portable Gateway Ships * Add Federations trailers Blue alien* Unity V Influence Overhaul * Changeable GC Voting Protocols
Modding discussion: Wormhole Drive Tests. 2.8.1. Proof Of concept. * Improve Pop Job Allocation by checking country resource income * Pop Faction Modding Bugged
Imperator: Dark and Purple UI Reskins.
P

Persepheus said:
Did you try it with 3.*?

Finally got around to implementing what I wanted to do, planet tooltips seem to work well with variables now. Sadly unless there is an extra step needed for leaders that ive missed, it looks like the localisation changes do not extend to leader tooltips / certain parts of the UI, too. I havent been able to get a single [ ] command to work on trait tooltips. 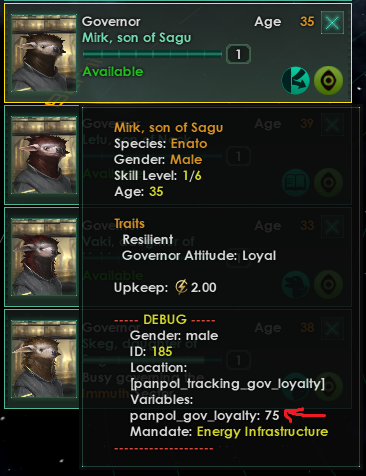 Whilst it's OK here (ive just used 5-tiers of coloured icons to show governor loyalty), there is no way to represent other modded variables like governor personality or ethos, without adding more traits - which gets a bit cluttered as they level up. 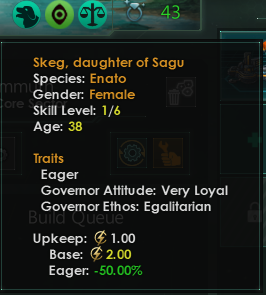 Well, again you could use the button_effect button. What it's worth, there are much less mods out there which modify the leader screen than the planet screen

This looks like it'll be a highly interesting mod
Toggle signature
We do not inherit the Earth from our ancestors, we borrow it from our children - Chief Seattle