Jump to latest Follow Reply
Menu
Install the app
You are using an out of date browser. It may not display this or other websites correctly.
You should upgrade or use an alternative browser.
Crusader Kings III 14942 MP Open Beta Feedback 26 Bug Report 10072 Tech Support 1361 Multiplayer 119 User Mods 1388 AARs (After Action Reports) Suggestions 4080
Previous dev diary Next dev diary 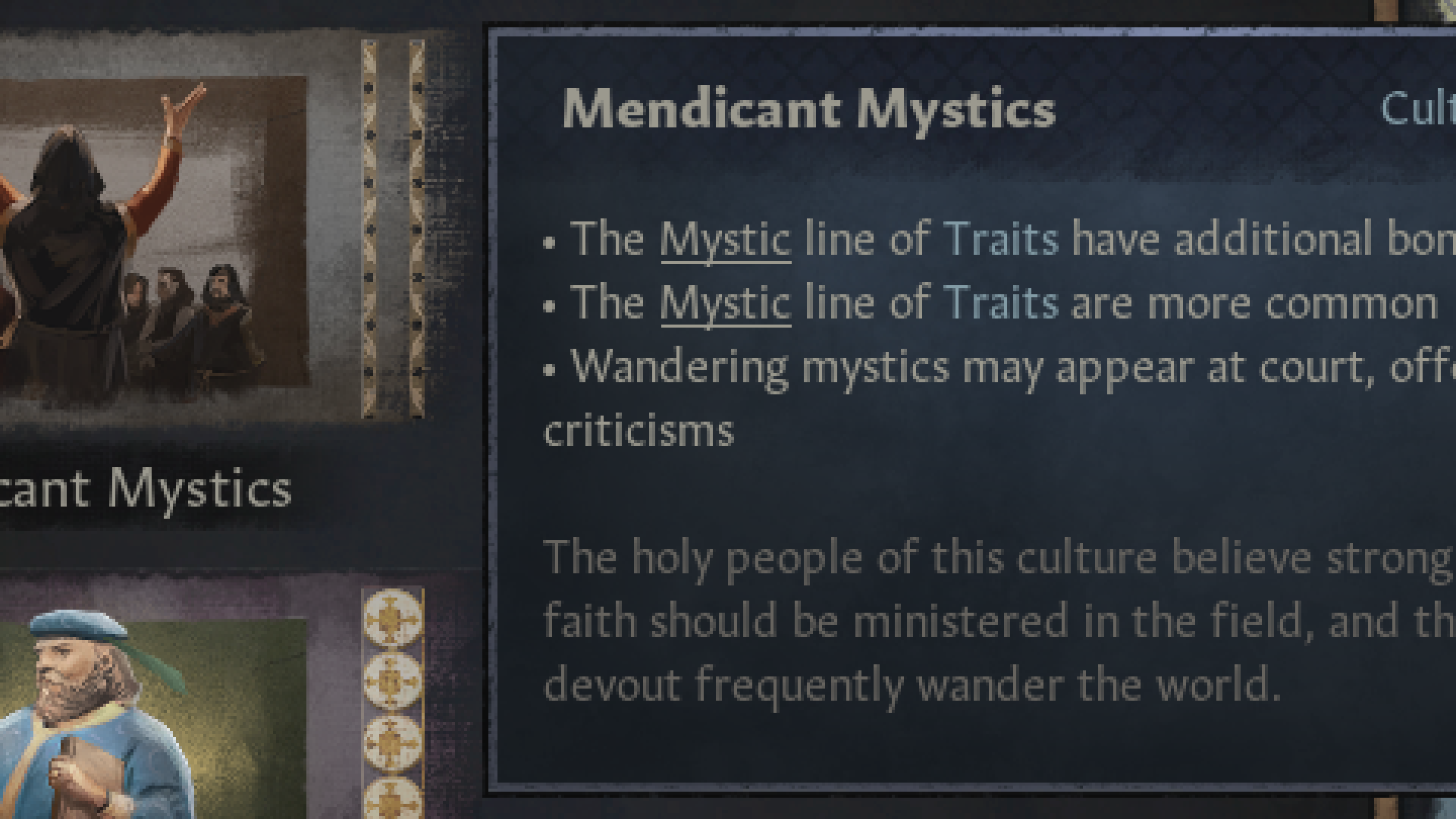 Welcome comrades! We’ve not got anything major on the docket for the day’s dev diary, so we’ll be taking a little peak at a cultural tradition that’s dear to my heart instead. Just to whet the appetite for more content a little.

Mendicant Mystics is a moderately uncommon tradition, one that synergises well with faiths that already boost the mystic lifestyle. Moreover, though, there’s something that just _speaks_ to me, personally, about the idea of impassioned people wandering the world, sharing their wisdom and message.

Consequently, I’ve spruced it up a little bit, adding some flavour to the idea of living in a culture where wandering know-it-all is a valid career choice. To reflect this, the following events will all _try_ to grab characters from the pool first, so wandering characters of such a culture are often at risk of deciding to become a mystic once they hit the road, and if a mystic breaks in to annoy you once, there’s every chance the same mystic might come knocking a second time down the line... 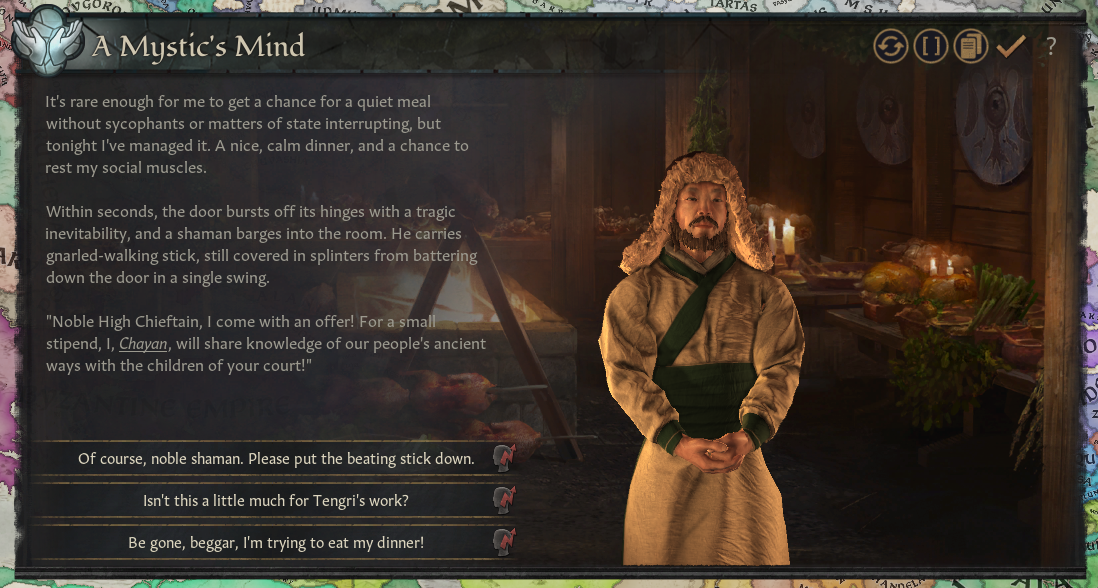 After all, who better than a stranger covered in twigs and mud to teach your children some valuable life lessons? 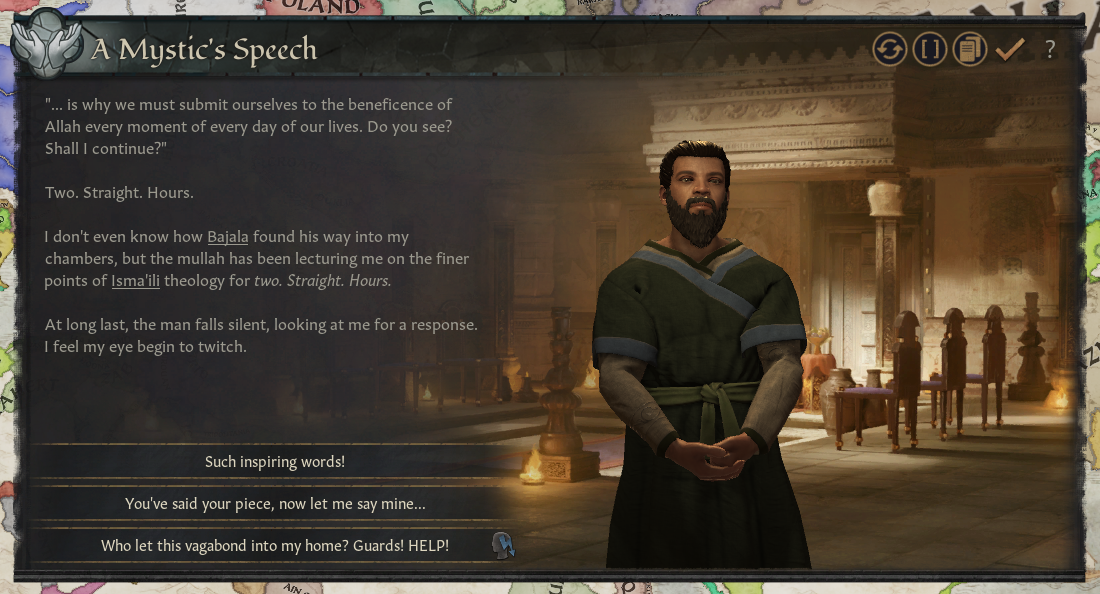 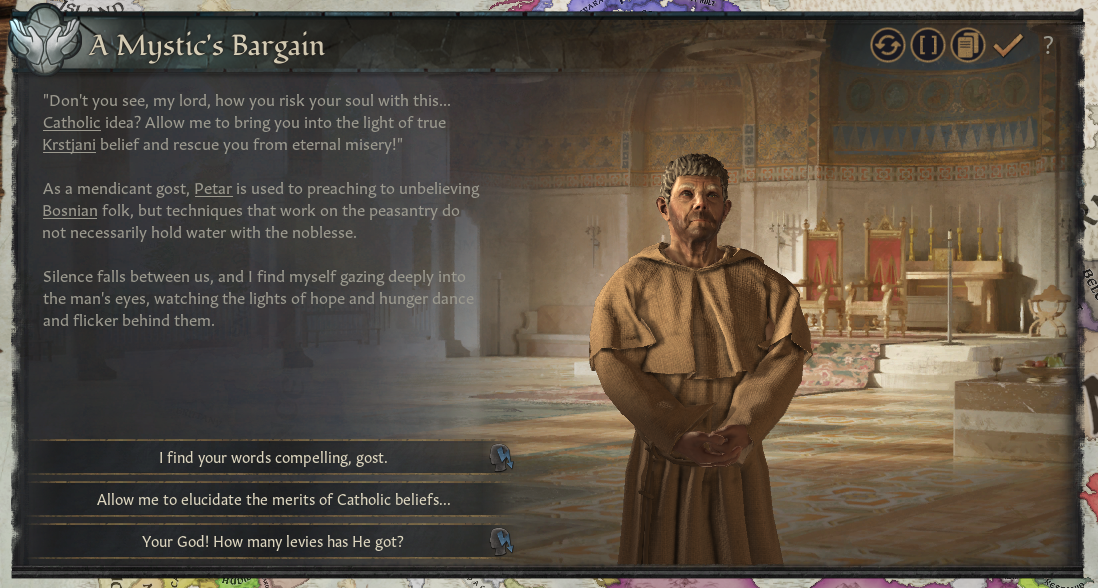 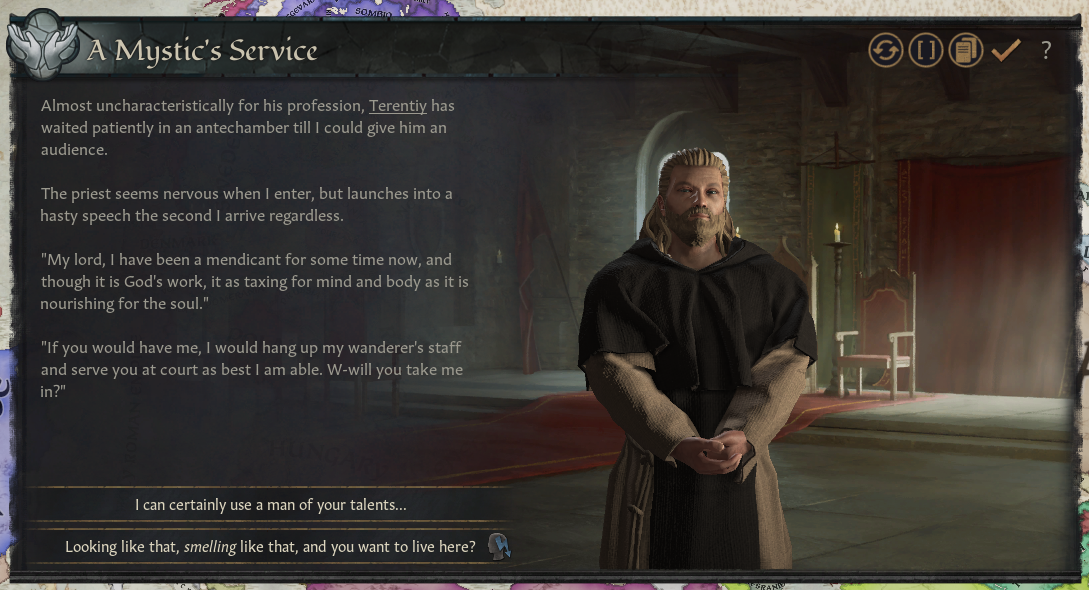 … of course, for some folks, the wandering may get too much eventually. 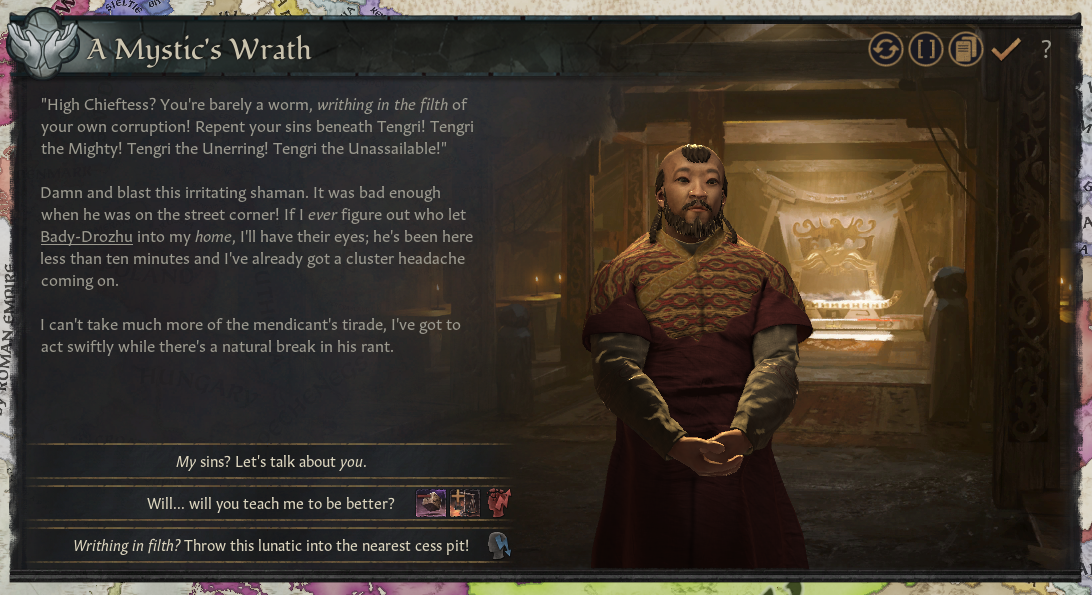 Hmmm, can’t really put my finger on why I like the idea of mendicant mystics so much. Something about them just seems delightfully familiar to me, I guess. Ah well.

Thanks for reading folks, and we’ll see you next dev diary!
Reactions:

These special culture things are just the coolest thing about this expansion. Its absolutely the feature I am looking forward to most.
Reactions:

Which cultures will have mendicant mystics as a starting tradition?
Reactions:

I agree that this tradition sounds like a lot of fun.

I wonder what the requirements for adopting it are?
Reactions:

I wish all these CTs gave not only bonuses but also maluses.
Toggle signature
My suggestions to improve CK3:
Optional Game Rules to change the way the quantifiable information is presented to the player

Are the underscores a grammatical error, or a clue to new modder coding available?

How many shaman events are there in total, and how often do they fire (if you are of a culture with this tradition)?

Can they fire even if you are NOT of a culture with this tradition? (The converting event seems fitting.)
Reactions:

Wokeg said:
Hmmm, can’t really put my finger on why I like the idea of mendicant mystics so much. Something about them just seems delightfully familiar to me, I guess. Ah well.
Click to expand...

I feel like something's going over my head here...
Reactions:

“Your God, how many levies does it have?” was the best answer ever.
Toggle signature
Shared hatred is the glue that binds friendships together.
Reactions:
J

will there be an event where I can replace my realm priest with the mystic?
Reactions:
B

Will we also get these events if our ruler's culture doesn't have this tradition but the county in which our capital is does?
Reactions:

Br1B said:
Will we also get these events if our ruler's culture doesn't have this tradition but the county in which our capital is does?
Click to expand...

I hope so. As a foreign ruling class recently installed in some areas I want to be pestered by local priests sounds fun. TBH anything that makes the clergy/priests feel relevent in CK3 will tickle me. Such a bland part of the game atm.
Reactions:

The Shacks said:
TBH anything that makes the clergy/priests feel relevent in CK3 will tickle me. Such a bland part of the game atm.
Click to expand...

God I hope so. Especially in the Abrahamic faiths (the main focus of the game) the first estate should be this confusing mess of a secondary power track sitting uncomfortably and awkwardly alongside the temporal power of temporal rulers. Why even make a game about feudal europe if your not going to even represent the constant struggle/power-sharing/accomodations between church and state.

Hopefully at somepoint at the VERY LEAST religious opinions and your characters adherence to them should be important. If I piss the Pope off it should be possible for him to convince my priests to close down all churchs unless they like me more or whatever.
Reactions:

This diary sent me back to the one announcing the rework of cultures and languages. This looks like the best part of the upcoming changes — and it's free!

The text of this event uses "gost" as though it's some kind of regional equivalent of a monk. But I couldn't find such a word in the OED or Wiktionary. Searching Wikipedia led me to Gost Radin, a Bosnian clergyman, and it seems that it's the word for a friar in the alleged Bosnian church. Learning about different cultures and religions is a great part of the CK experience, but maybe the meaning could be made a bit more obvious in this particular case? I don't think the Religion screen has a list of each religion's terminology (at least in 1.4). And in this particular case, a simple Google Search isn't going to be enough (at least until "ck3 gost" points here ).


james24eagle said:
Are the underscores a grammatical error, or a clue to new modder coding available?
Click to expand...

If you mean the underlined words, I take it that these are words that will change depending on the context and players can click on them for further information. In the Bosnian example above, players might want to know a bit more about the Krstjani religion before they convert to it.... I for one knew nothing about it before this post.
Last edited: Jan 4, 2022
Toggle signature
Seek Truth From Facts or in Mandarin: 实事求是
Reactions:

Zylathas said:
These special culture things are just the coolest thing about this expansion. Its absolutely the feature I am looking forward to most.
Click to expand...

Agreed.
Toggle signature
Nations reel and stagger on their way; they make hideous mistakes; they commit frightful wrongs; they do great and beautiful things. And shall we not best guide humanity by telling the truth about all this, so far as the truth is ascertainable?-W.E.B. Du Bois.
Reactions:
Show hidden low quality content
You must log in or register to reply here.
Share:
Facebook Twitter Reddit Tumblr WhatsApp Share Link
Top Bottom