Hello and welcome to another Development Diary for Imperator:Rome!

I am @Trin Tragula and today I will talk a bit about maps and the political situation at the start of the game.

Previously we have talked about how we have approached researching the map. In this diary I will instead focus on what our map actually looks like, and the situation in Italy at our start date, 304 BC. This date was chosen after long consideration and we hope that it will provide an as interesting setting for a game that spans the main expansive phase of Rome’s existence (as well as many other things, but we will get to those later, in other diaries). 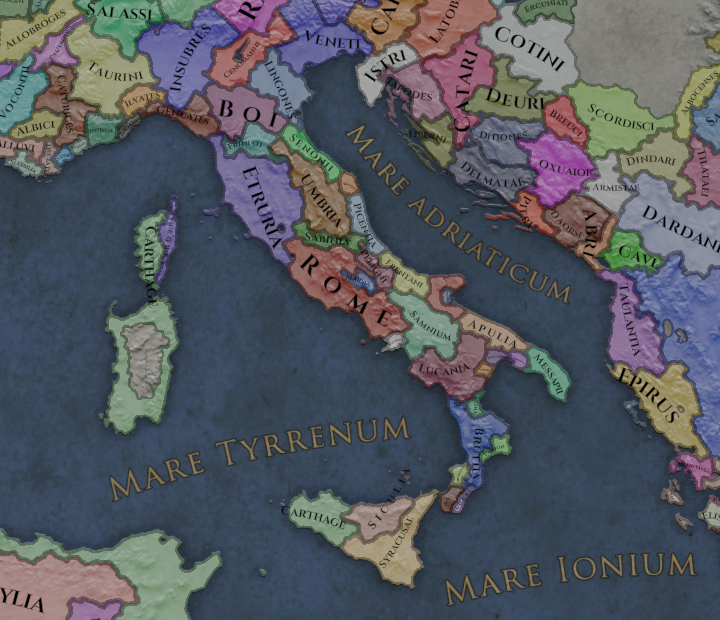 Central Italy - The Rise of Rome: 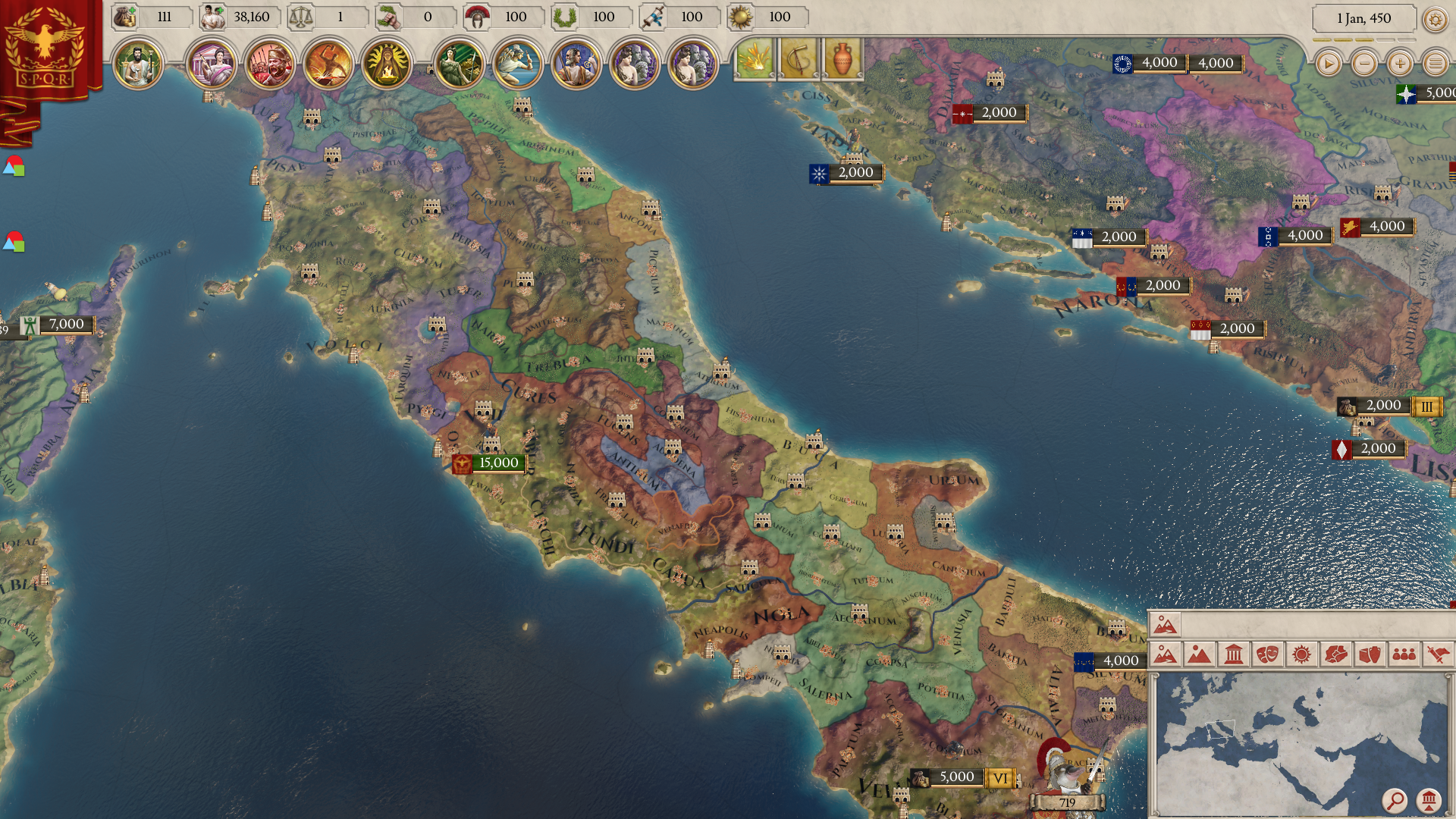 At the start of Imperator, the city of Rome is already an impressive 450 years old. Rome has however not been a major force for nearly as long. In the last 40 years leading up to our start Rome has begun to grow quickly, first unifying the lands of the Latin League under its rule and then expanding at the expense of its former Samnite allies.

The recently concluded Great Samnite war has transformed Rome from a local power in Latium with designs on Campania to a large country stretching right across the central Apennines to the Adriatic coast.

The defeat of both Samnium and Etruria has both sent shockwaves through Italy and made a few select Romans very influential and very rich. This is an age where the Republic went through a period of dynamic development, with its institutions and its internal politics transforming from that of a small city to what would become the center of a growing empire.

Sicily in the age of Agathocles​ 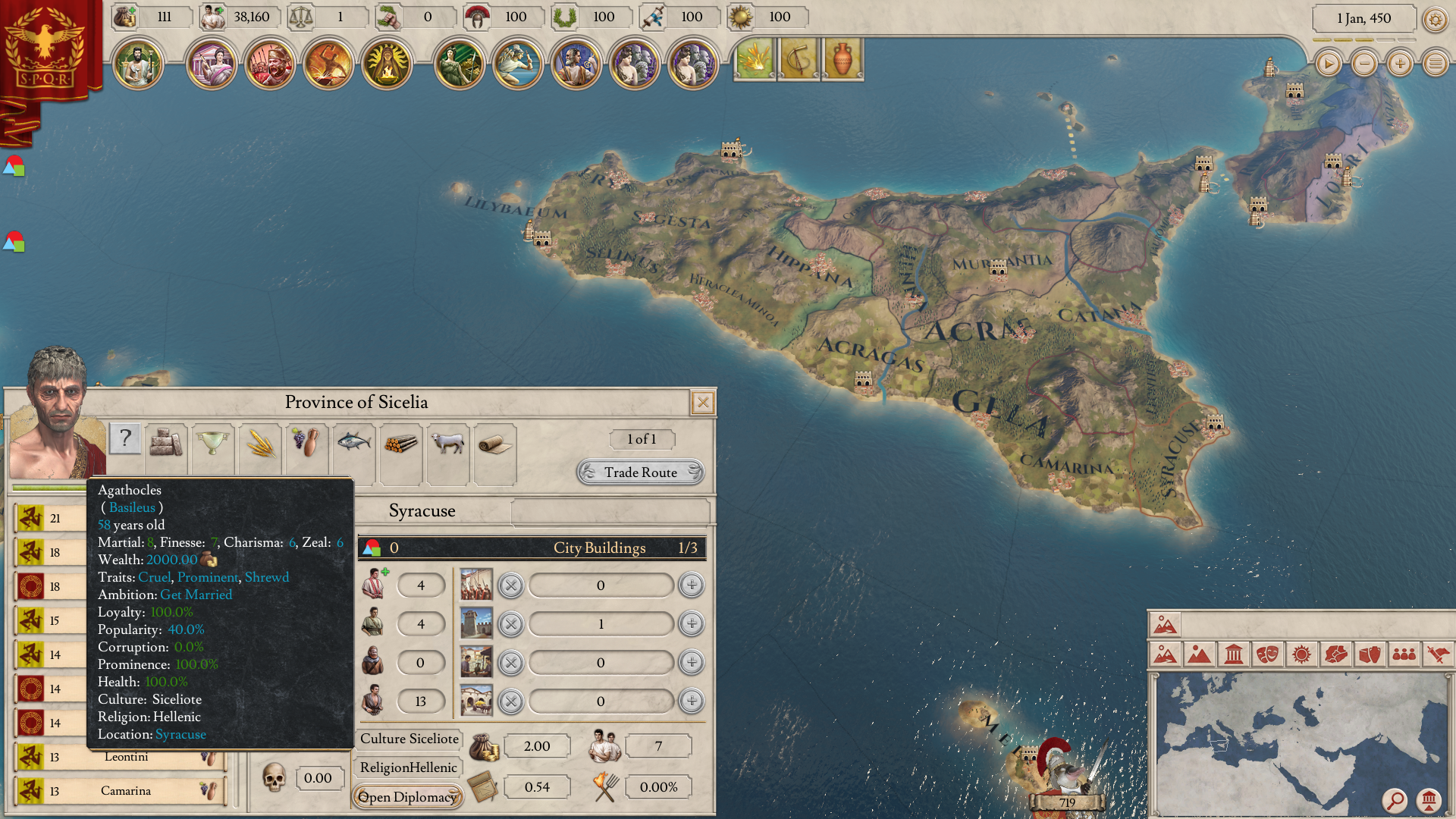 In 304 BC the island is divided between the Great Power of Carthage and the Kingdom of Syracuse. The latter is ruled by the self proclaimed Tyrant Agathocles. A man who rose from humble origins and a life as a soldier and an adventurer, to be the leader of the greatest city on the island.

Agathocles’ installation in Syracuse can in many ways be attributed to Carthage, who assisted with their army, hoping to destabilize the Greek state with which they had competed for hegemony over both the island of Sicily itself as well as Corsica and Sardinia.

No sooner had Agathocles been installed and slaughtered his political opposition, than he turned on his former allies. The last 8 years have been a long and drawn out struggle between Syracuse and Carthage. One in which the seemingly much stronger North African republic would see its countryside in modern Tunisia burn, and its commanders decapitated.

Nonetheless the peace that was finally signed in 306 BC, just two years before our start date, has more or less been a return to status quo. Carthage and Syracuse still control about as much of the island as they did before, and a central part remains unaligned, unwilling to directly declare for either side.

This is an uneasy peace, more dictated by a will to gain respite than real will to seek reconciliation. In Carthage itself, an ambitious general takes this as an opportunity to proclaim himself Tyrant, much like Agathocles did years prior. But where Agathocles could massacre his opponents, Bomilcar is abandoned by all his friends and publicly crucified.

It is now 304 BC and in the east Alexander’s former generals have begun declaring themselves kings in their own right. Despite the uneasy truce with Carthage, Agathocles has decided to do the same, and names himself King of Sicily. What his plans are for realizing these ambitions are, only time can tell.

At the time of our start date Southern Italy is a divided region. Also known as “Magna Graecia” It is home to a number of Greek city states, many who have ties to their former homeland, and to the great Hellenic power of Syracuse. The region is also home to a number of large tribal federations such as the Bruttian and Lucanian Leagues.

Many of the Greek cities once cooperated in the Italiote League, but many divisive conflicts have made that form of cooperation less relevant.

Historically Syracuse has been dominating force in the region, but now Epirus, Rome, the Samnite League and even Sparta are also meddling in local politics.

The end of the Second Samnite war in the north is about to send ripples through the political sphere, with some major powers reorienting themselves to be able to protect themselves from Rome, and others instead seeking Roman protection. 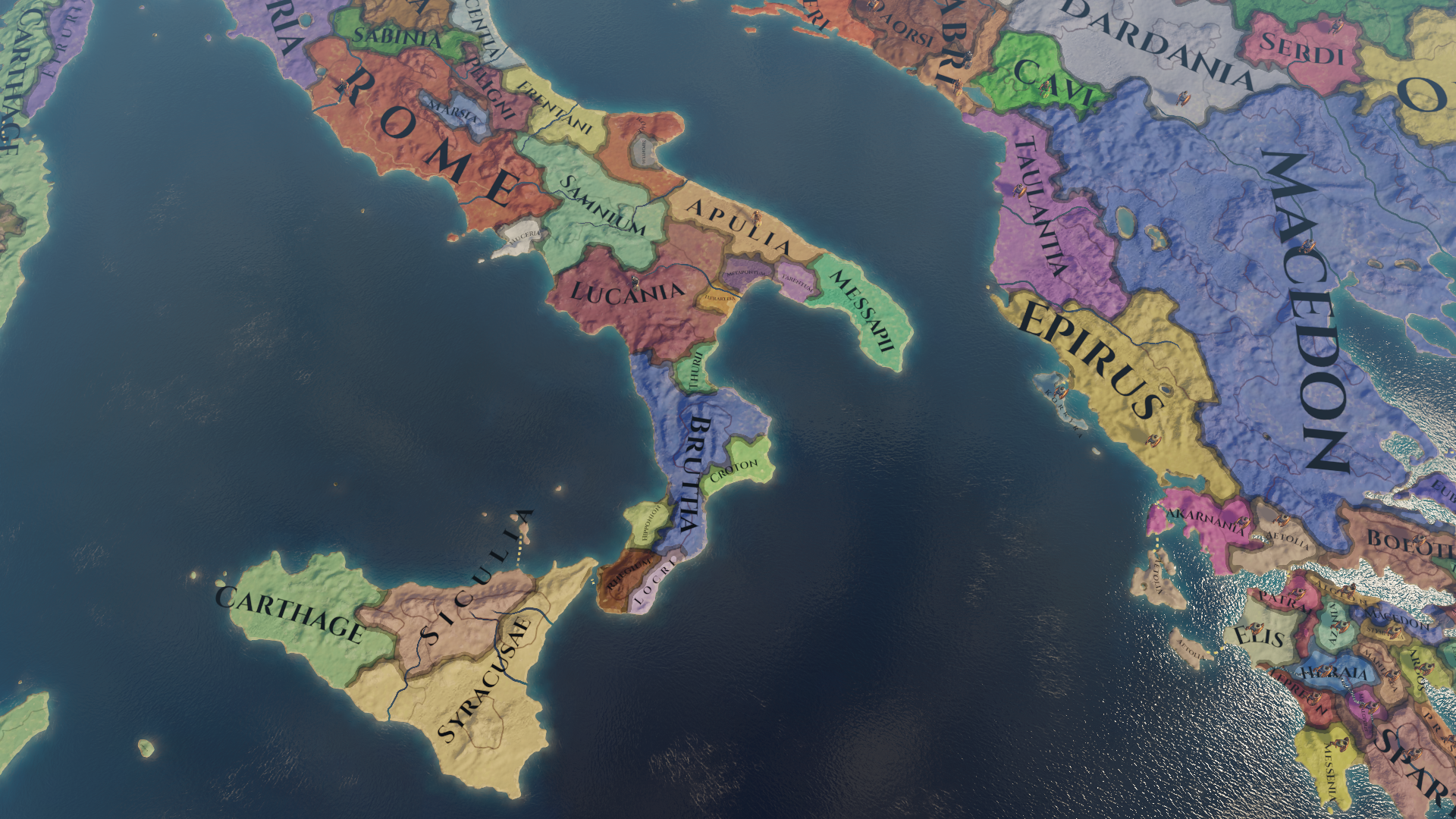 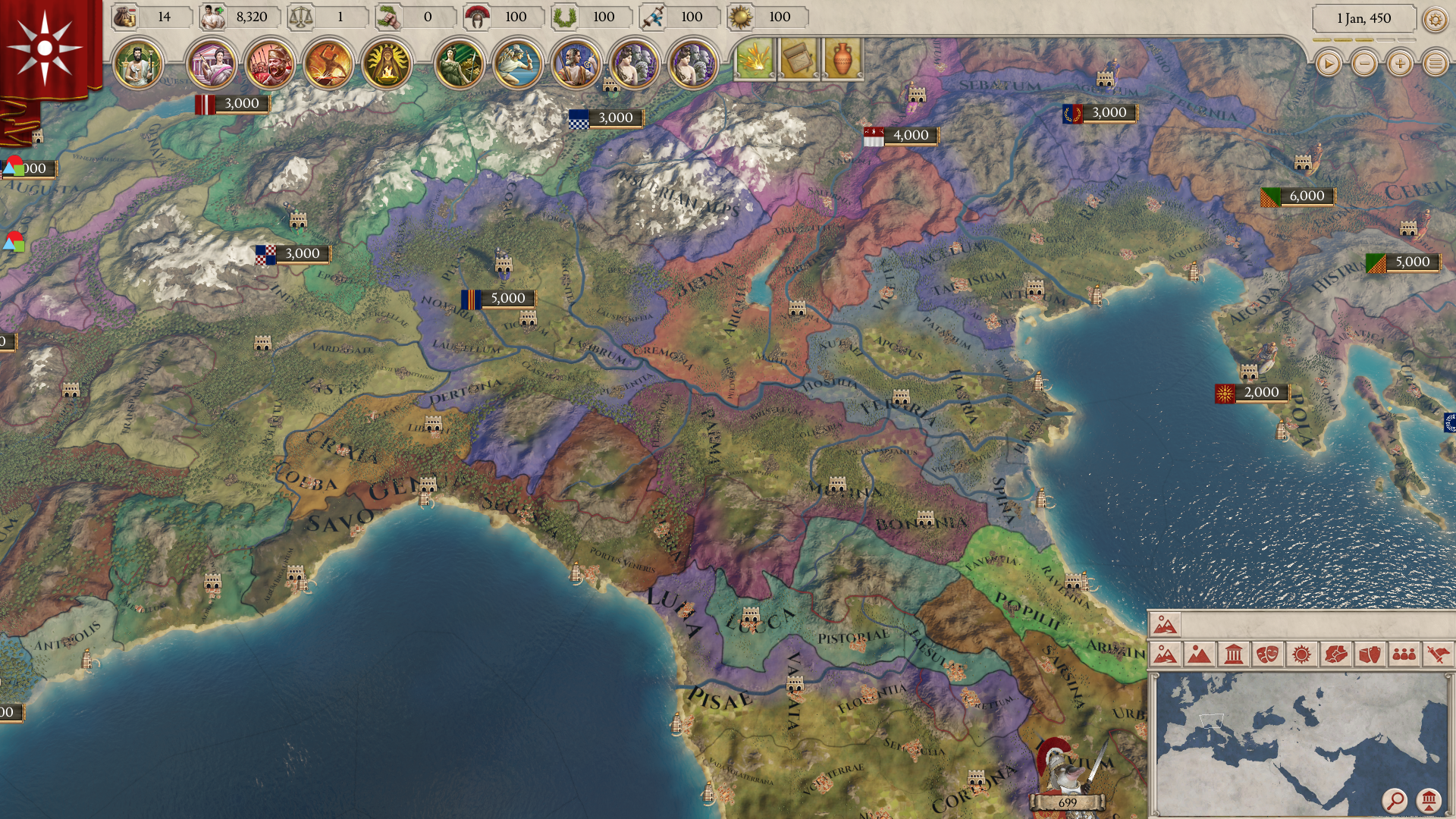 In 304 BC the northern Italian basin is dominated by Celtic, Lepontic, tribes. Many among these tribes migrated into the area at the beginning of the century; a moment in time quite entrenched in the Roman psyche, as the tribesmen reached as far south as the city of Rome itself, sacking it, in what would be remembered as the Gallic disaster.

Apart from occasional raids and mercenary bands, however, this region is not as integrated with Central and Southern Italy. To most states in this region the growing Roman state is not yet seen as a threat.


Starting Countries:
That was all for today. Hopefully you have enjoyed this diary about the setup at the start of the game. Next week I will talk a bit about the Greek world and of the Greek Military Traditions.


EDIT: To clarify a Starting country is one you can select at start. There are no countries on the map that are not playable.

Alright, so we're beginning to get detailed looks at places on the map. Nice.
Also, long live Boii!

PS:
Please have a "Bar Mitzvah" achievement for conquering the Isle of Man as a Jewish Boii.
Reactions:

Is a United Italy as powerful as the major Powers such as Carthage?

i've been all-caps WAITING for these map updates!

Wow, call me hyped, the map is truly beatiful. Surely it will be an excelent foundation for a great game.
D

Look at the Greece

Last picture was of the wrong region, updated to add the right one.
Toggle signature
No fighting in here! This is the war room!

Finally the army size and manpower seems to be the way it should be. that rly made my day. and ofc the nice map, especially the historical details.

Austregisel said:
GREAT DD, but the last image is repeated.
Click to expand...

Should have been fixed now
Toggle signature
No fighting in here! This is the war room!

It's looking good. For me, no game beats a good roman game and you seem to be on the right track.

Also, for sakes of pretty pictures I have removed a lot of troops and fleets so that they don't obscure the map in some of the closeups
You can be sure that each country in the game does start with an army of some sort.
Toggle signature
No fighting in here! This is the war room!

I can’t wait!
Looking forward to trying a Kingdom of Judea at the very least, and then getting a save converter mod and converting over to CKII with When the World stopped making Sense running...
Toggle signature
Thorbjorn42gbf:
I love how basically all the rest of the worlds gamers go "My god more dlc's? why?" while people playing paradox games go: "YES DLCs EXPANSIONS GIVE ME NOW"

Probably stating the obvious here but does "playable countries" mean that not all countries on the map will be "playable"?

Hi Trin, the map looks fantastic. Surely this is a good sign this game is well along in development.

I guess I am a bit disapointed because Rome is already really large. I hope a start prior to the current will be added by a later expansion.

I have always used that title in the diaries I write It means they exist at start.
There are no locked away countries in Imperator, just as there aren't in Europa Universalis where I've previously used that headline.