Jump to latest Follow Reply
Menu
Install the app
You are using an out of date browser. It may not display this or other websites correctly.
You should upgrade or use an alternative browser.
Stellaris 47745 Bug Reports 27915 Suggestions 17174 Tech Support 2653 Multiplayer 363 User Mods 4458 Stellaris AAR (After Action Reports) Console edition 1141
Previous dev diary Next dev diary
Show only dev responses

Hello and happy new year! I’ll be your substitute Doomdark for today and in this week’s dev diary we’ll take a closer look at Fallen Empires.

The galaxy is vast, old and unknown. New species constantly flare into existence and some are even able to take their first cautious steps towards other stars. Of those that do some are arrogant enough to assume that they are the first and only chosen. They fail to realize that others may have taken those same steps before them, others who have found amazing wonders and unraveled their secrets, others who reached the furthest edges of knowledge only to crumble away. Those others are called Fallen Empires.

These are once-glorious empires that for unknown reasons have stagnated and often fallen to infighting or crippling apathy. That which once covered hundreds of systems have shrunk to a fraction, barely held on to by superior technology and what little remains of a once glorious fleet. Fallen Empires are isolationist and will look at newer species with disinterest or outright contempt. Diplomatic attempts are futile and they will most likely attack any unknown ships entering one of their remaining systems. 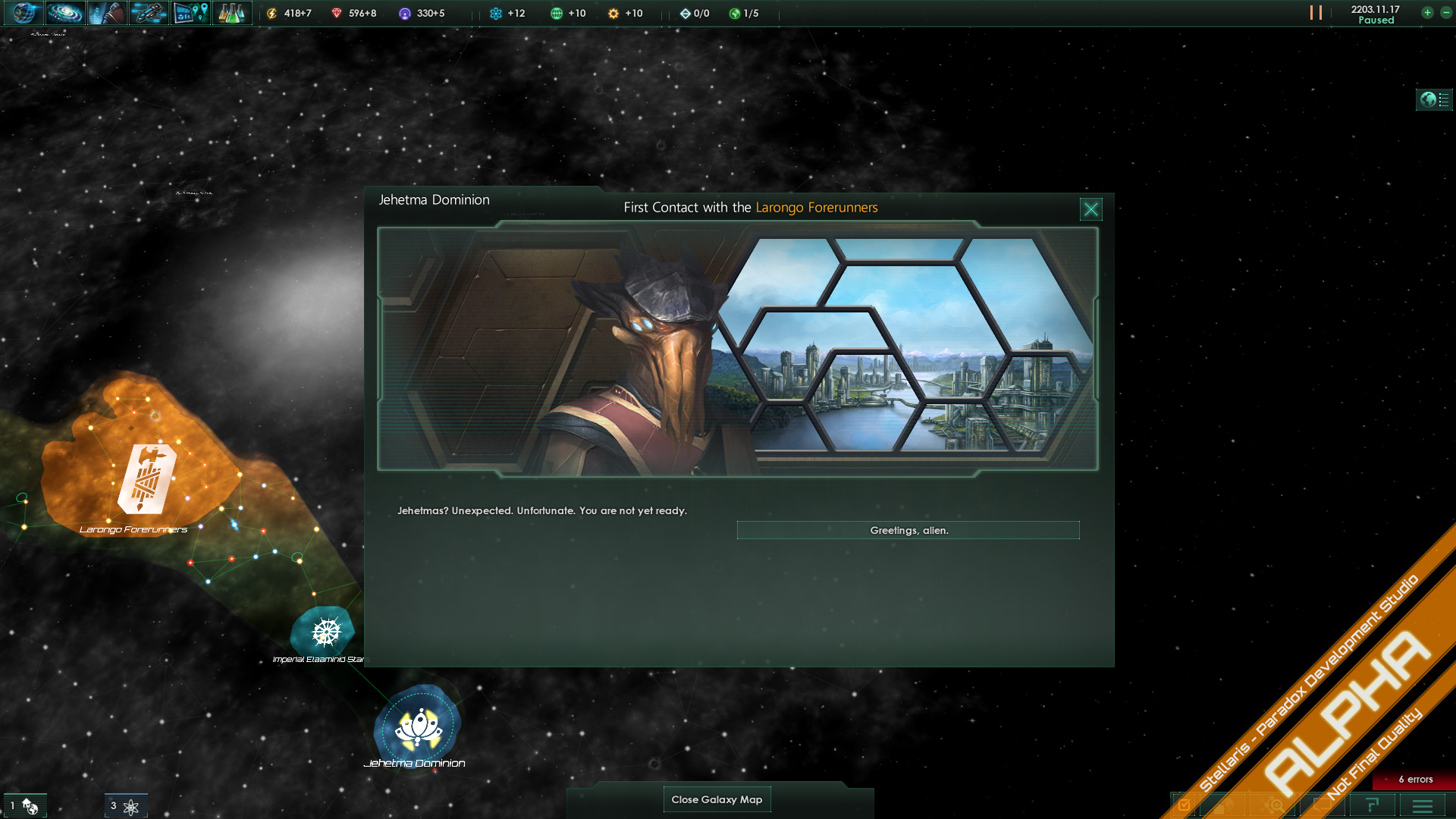 The response of Fallen Empires vary greatly when approached. It is rarely friendly though.

We’ve added Fallen Empires to the game for a couple of reasons. They have the potential to enable some really cool stories and there is a bunch of different directions we can take to ensure players get a different experience from game to game. Players should never feel confident in how a Fallen Empire may react to different events in the galaxy. If left alone they might resurge as a reaction to a galaxy-wide threat or become outraged when their most holy planets are colonized by lesser races.

Gameplay-wise the Fallen Empires can act as a potential source of advanced technology for players willing to invest the military forces required to defeat one of their fleets in battle. In Stellaris, all ships destroyed in combat will leave debris behind and through reverse engineering a player may discover the technologies required to build the weapons and components equipped by those ships. Players can also invade planets belonging to Fallen Empires, allowing them to utilize whatever advanced buildings placed there. This of course means dealing with a new species within the Empire.
While the rewards may be tempting, players may want to consider the risks before attacking a Fallen Empire. Who knows what horrors they have unearthed during the ages, what forbidden secrets their planets hold within, what captives might be unleashed should their wardens be struck down. 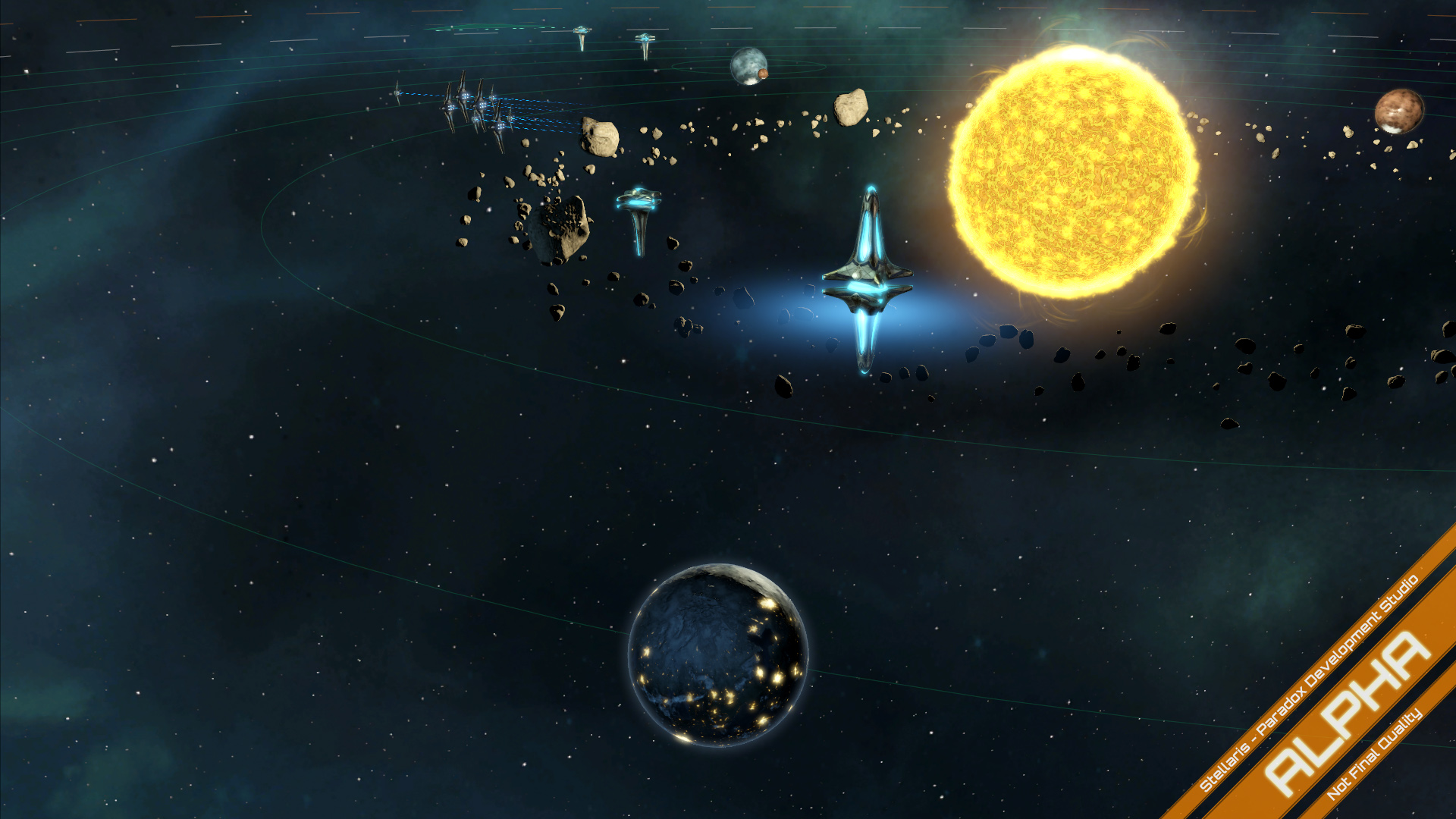 Fallen Empires will use a separate series of models for their ships and stations.

Next week the good Goosecreature will be back with a dev diary on the events and mishaps that may befall colonies and their inhabitants. Until then!
Last edited by a moderator: Jan 28, 2016
Reactions:

Awesome btw does that precourser look like a prothean or is that just me?

Question: can states that start the game as normal empires become fallen empires in the late game?

"Greetings, alien" - that's how a polite xenophobe would sound.
Reactions:

Yep, that's pretty much what I expect, and I saw it, and it was good.
Toggle signature
Elf Kill Count: 0 (Awaiting Runemaster)
Reactions:
I

What happens technology wise if you invade/annex a Fallen Empire planet?

The more DD that comes out the more i want the game now. Wish good games could just suddenly appear.
Reactions:

Actually I have a few questions that occur to me:

2. If fallen Empires resurge will they pursue new scientific advancements?

3. Will any of the Fallen Empires be elves?
Toggle signature
Elf Kill Count: 0 (Awaiting Runemaster)
Reactions:

Also can we use those fallen empire ship models for our ships?
Toggle signature
My AARs
Vyshan's Inkwell listing of his AARs
Dharmachakra - An Indian and Dharmic Religion Improvement mod
Retired HOI4 Kaiserreich Dev
Reactions:

Don't forget to put the Dev Diary on the front page as news I found this purely by accident!
Toggle signature
"Honor compels me to stab you in the back, ShoGul." - blue emu
Reactions:

Everyone's excited for fallen empires (one of the coolest features of the game BTW) and I'm just there, amazed by the fact that youa dded city lights to the night side of planets
Toggle signature
Why no love for the Kingdom of Britanny?
Reactions:

You are not yet ready.
Reactions:

Swedes Ahoy! The Story of My First Victoria 3 Campaign
Reactions:

Long have I awaited this! Praise the Comet!

Support for the Foundation universe confirmed.

In all seriousness, though, will it be possible for the player to play as a fallen empire? Either by becoming one or from game start?
Reactions:

Ooooh, resurgent fallen empires, sounds menacing. I like that they'll be dynamic.
Reactions:

This sounds pretty awesome. I hope one of the events is they unearthed an even stronger, even more fallen (asleep) empire and defeating them releases this terrible force on the galaxy Mongols-style.
Toggle signature
██████████
Reactions:

Honestly, Fallen Empires are so much more than I expected them to be. I thought they'd just be a desolate planet with old technology abandoned to time. I assume this is still a thing - Coming across completely obliterated Fallen Empires?

I love this, and I especially love the way in which coming across them could open up completely new avenues in your story.
Toggle signature
Check out my Youtube, where I upload Stellaris videos!
Reactions:

Will the pops of the fallen Empires be more insurgent to their new overlords than ones that have been say uplifted, it would make sense as they would probably still see themselves as superior to their conquerors.


Haldan said:
Long have I awaited this! Praise the Comet!

Not to mention, that Fascist flag.
Click to expand...

I see that symbol on many fascist countries in Victoria 2 but what does it mean?
Toggle signature
If anyone proclaims a certainty of 100 % or more then you know that they are deluded about one thing at least.

Caspoi said:
I see that symbol on many fascist countries in Victoria 2 but what does it mean?
Click to expand...

It is a bundle of sticks. It means that they are stronger together. The symbol originated in Italy.
Toggle signature
Check out my mods!
High America
The Successor of Poland
Reactions: