Jump to latest Follow Reply
Menu
Install the app
You are using an out of date browser. It may not display this or other websites correctly.
You should upgrade or use an alternative browser.
Crusader Kings II 69583 Bug Reports 19689 User Modifications 10510 Suggestions 5909 Tech Support 6334 After Action Reports
Previous dev diary Next dev diary
Show only dev responses

Hello all, it’s been a while, but it’s my turn to write a Dev Diary again! Today I’m going to tell you about the Treasury system we’re adding in 2.7. This system itself is part of the free patch. However, a lot of the content for it is part of Monks and Mystics.

The Treasury is where characters store their items, such as weapons, artifacts, or holy relics. In many ways items are much like Character Modifiers which you are likely already familiar with, but Character Modifiers are a fairly limited and not entirely clear system. With the new Treasury system we have greater control over how they work and when they are active as well as more UI space to display and explain them. Not only that, this system allows items to be inheritable and stealable.

We hope that seeing your character’s items as physical object rather than just a number on their character sheet will offer greater immersion, especially for player who like to focus on role-playing. Sure, in the past you could find a nice axe to increase your personal combat skill, but it was just another number - now you’ll see a gleaming axe, ready to hew the limbs from your foes! 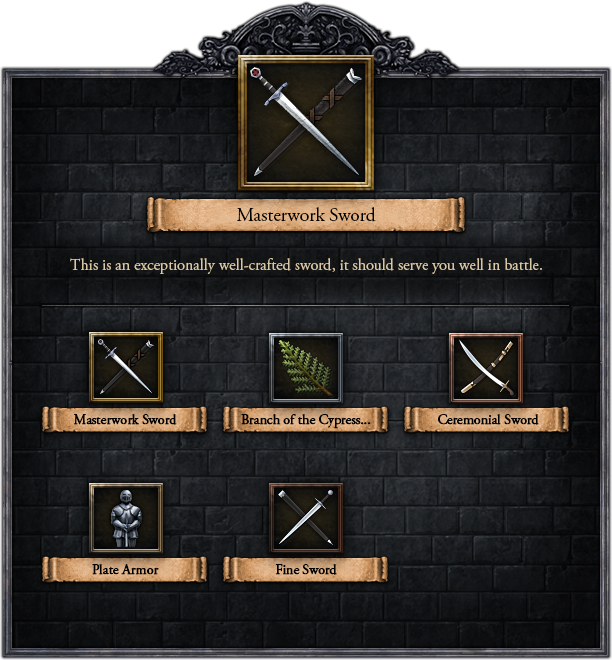 this is not quite final artwork, but it should be similar to what we end up with

As an example, say your Character has found the Holy Grail - you will now see the Grail in your Treasury with a picture and a description as well as the effects of owning it. Further, if some Norseman comes along and raids your castle, there’s a chance that he’ll make off with your precious Grail - however, since he’s not a Christian your most holy relic is nothing more than a fancy cup to him.

As mentioned, items are also inheritable, they all go to a character’s primary heir. In the event someone dies without an heir, the items will pass to their liege if they have one, but they have a chance of being lost in the process. If an independant character dies without heirs, their items are lost - although if time permits we have talked about them having a chance to be snapped up by powerful vassals.

For 2.7 we’re converting several character modifiers into items, such as the +1 axe you might find while raiding, the saint’s bones you might find on a pilgrimage, or the trophy you made from the skull of your rival. With Monks and Mystics we’re adding a lot more, such as:
As well as the items you can find or make while playing, we have also added a system to place some Artifacts into character’s Treasuries when a new game is started. These are mostly placed at random to keep things interesting, but there are also a few historical artifacts given to famous characters.

Could be really nice, depending on what happens. But please don't start making that generic d&d/Diablo crap with "sword of doom" and "ring of the dragon" kind of stuff. The "masterwork sword" starts leaning in that direction.. in that case, really? Who is this master? Where did he come from? Why do I have his sword? Etc. Unless there is a back story, it risks being superficial.
Last edited by a moderator: Dec 12, 2016
Reactions:

Great, now this is more like a real RPG
Reactions:

I can haz Carsomyr plox?
Toggle signature
My InkWell.
Reactions:

Interesting. Didn't see Treasury coming! But all good - it sounds like it could work very well. Looking forward to the expansion.
Toggle signature
"Shall I compare thee to the copy-paste?
Thou art more bland and more impersonal."
Reactions:

Will you be able to aquire Retainers and mounts with this system as well, or is it just items?
Toggle signature
"Too often Fate,
by all abhorred,
to savage poison,
adds the sword."
- Boethius, The Concillations of Philosophy
Reactions:

Very nice addition to us roleplayers Great work, this dlc is shaping up nicely!
Reactions:

Cool idea! Two questions:
Is there a limit to how much stuff you can have in your treasury?
Can you sell your stuff?
Toggle signature
CK3 Mod: Sunset Invasion
GEDCOM to CK3 conversion tool

"The AI doesn't actually have a plan for prisoners, it just periodically picks something to do to them. It could be torture, release, or it could be torture, torture, torture." - Darkrenown, 2016
"I'll just grab something from my personal blog, since it is late and I have a hard time comin up with something witty and memorable right now, and hopefully that is good enough " - Snow Crystal, 2018
"Don't quote me on that though." - MrFreake_PDX, 2020
Reactions:
J

Calantyr said:
Will you be able to aquire Retainers and mounts with this system as well, or is it just items?
Click to expand...

Just items, although there's no reason you couldn't use it for other things if modding.
Toggle signature
Relentless madman.
Reactions:

Darkrenown said:
Not only that, this system allows items to be inheritable
Click to expand...

Darkrenown said:
As mentioned, items are also inheritable, they all go to a character’s primary heir.
Click to expand...

They always all go to the primary heir? Even with gavelkind? Because that would seem to eventually lead to a huge stacking of e.g. holy relics---especially if you get them more frequently than now. You can already end up with many of them as is.

Can swords break or will you have it for all eternity (assuming nobody nicks it)?
And can you have as many as you like?

So they give any boni? Prestige perhaps?
And can they be melted down in times of need?
Toggle signature
We need Chalcedonian Christianity in 867 A.D. instead of Catholic/Orthodox split for Crusader Kings III. Copy and paste this into your signature if you agree!

Great! Will it be possible to sell your precious heirloom in case of dire need? Also, it’s great chance to introduce coronation, and as a result character gets a crown.

P.S. Also, nitpicking here, but I hope plate armor is available in late middle ages; before that mail is preferable since aforementioned was not developed yet.
Last edited: Dec 12, 2016
Reactions:

Question. Is there a possibility to split the 'goodies' amongst kids, for none primo rulers?
Reactions:

ha! I feauture I longed for so long, I actually almost forgot it
Toggle signature
“And remember, no matter where you go - there you are. ”
- Confucius
Reactions:

The Game of Thrones mod is going to love this.
Reactions:

Darkrenown said:
or the trophy you made from the skull of your rival
Click to expand...

For CK2 players who have trouble dealing with council revolts, check out my post here:
https://forum.paradoxplaza.com/foru...how-to-deal-with-council-faction-revolts.169/
Reactions:

Link777 said:
The Game of Thrones mod is going to love this.
Click to expand...