I feel like I've already shown my WC attempt here. Like, months ago. Can't find it however, even after looking through my posts in this thread. Anyway, after not touching it for 2 months or so I decided to play another 18 years: 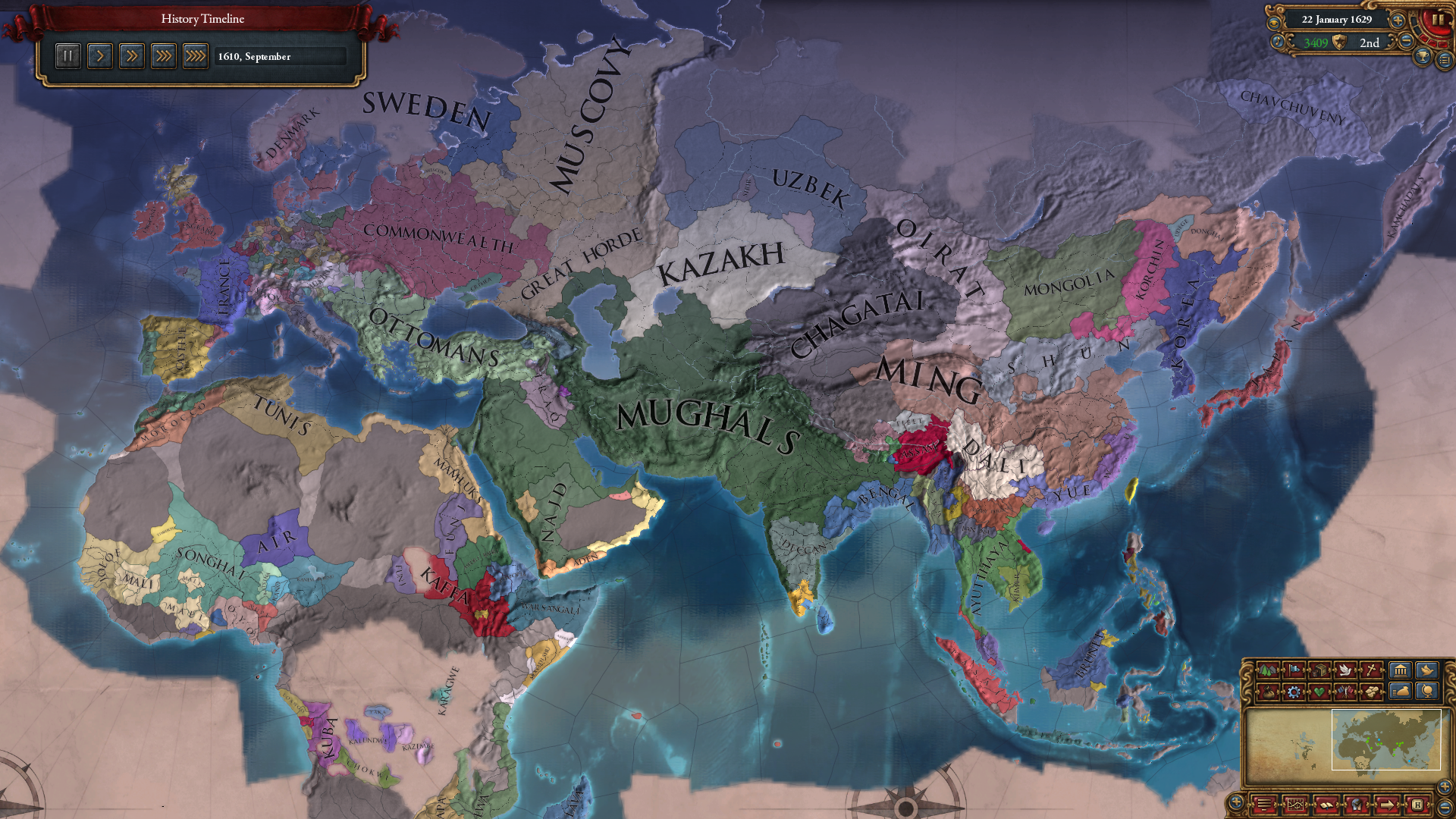 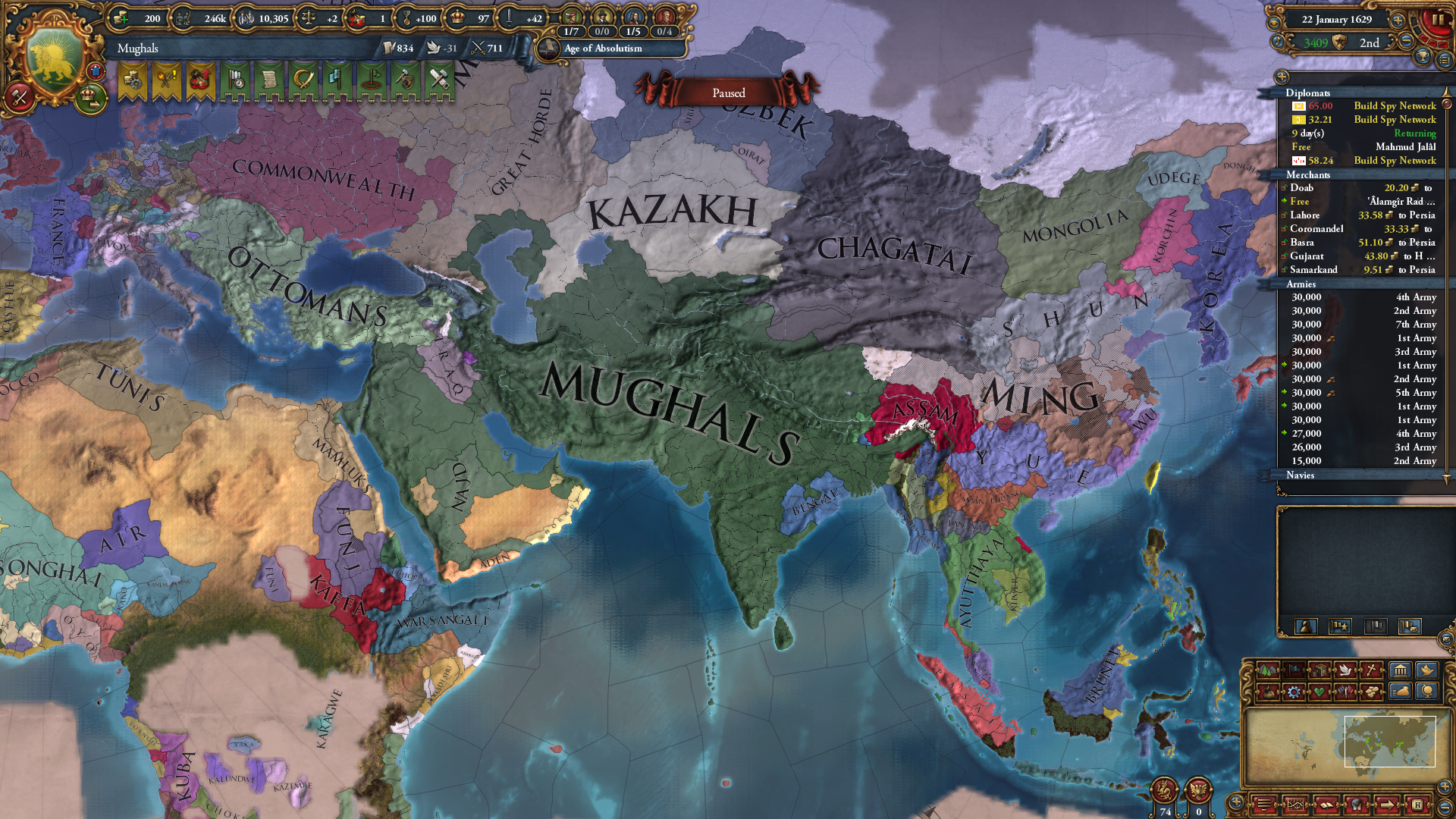 Iraq, Ardalan (pink OPM next to Iraq), Kazakh, Sibir and Hadramuth (bunch of islands) are vassals.

Next wars are annexing Oirat and putting pressure on the Mamluks again, before starting work on the Ottomans.

The biggest singular threats currently, aside the Ottomans, are probably the PLC and Two Sicilies with a PU over Castile.
Expand signature
ROTW bro

Most Recent: Even Better than Piet Heyn
Most Proud of: This is Persia!
Reactions:

Fifty years into my France campaign, with nonstop wars and good PU luck, this is looking like a very promising start for my first world conquest. 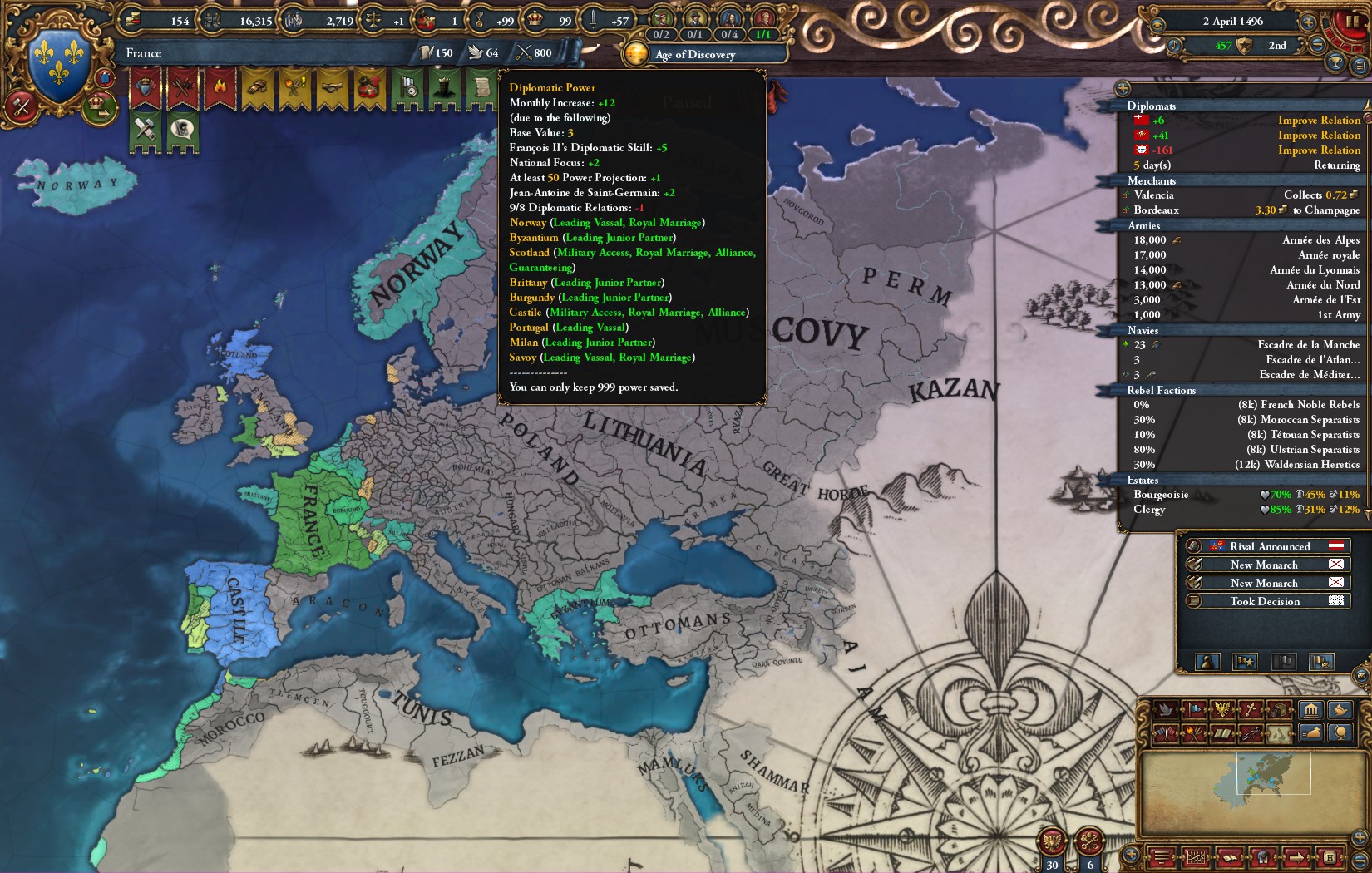 Also, this mission tree is OP. A few years later, I've gotten Castile, Aragon, and Naples in my realm as well, without generating enough AE for a coalition. 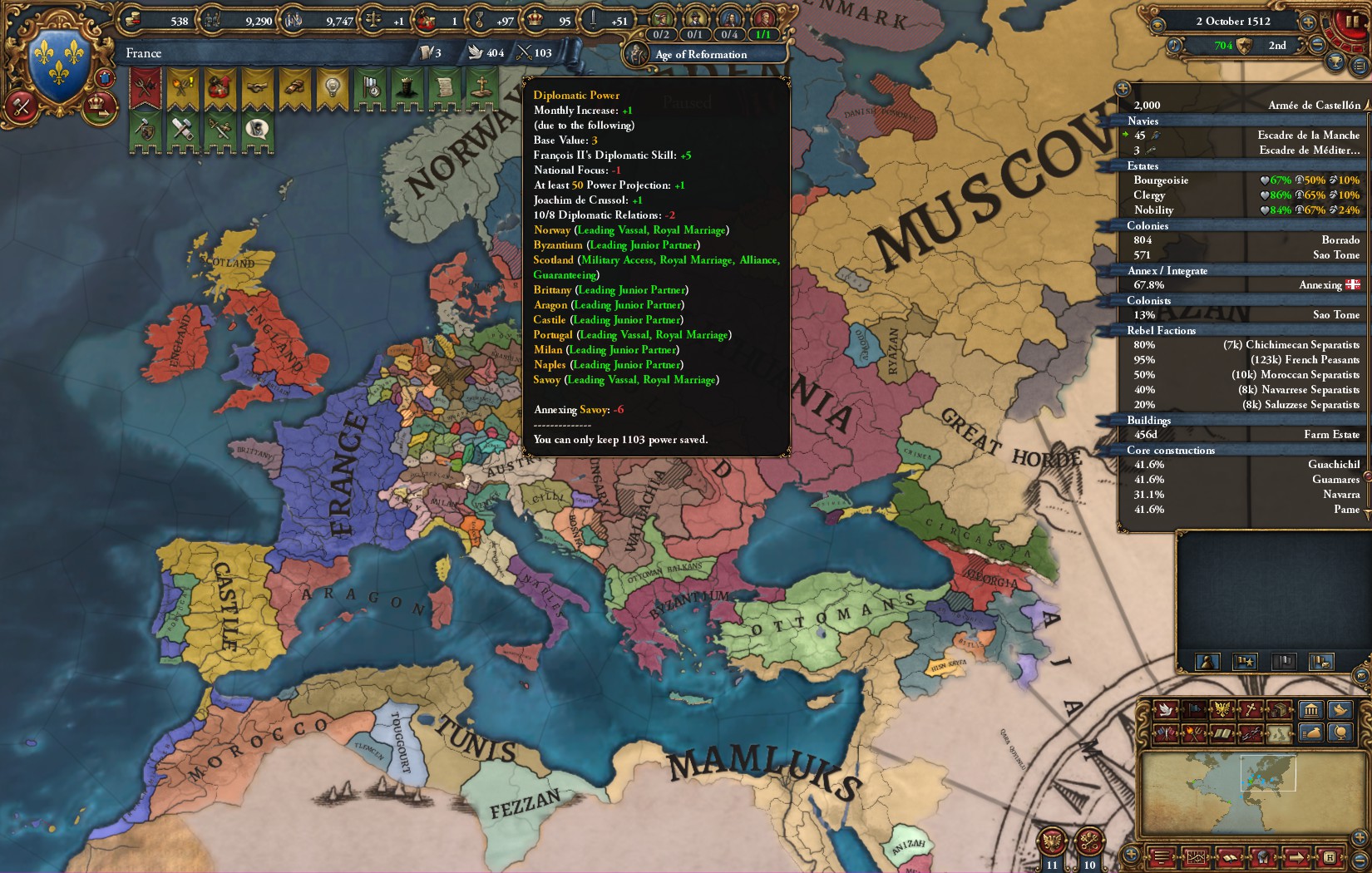 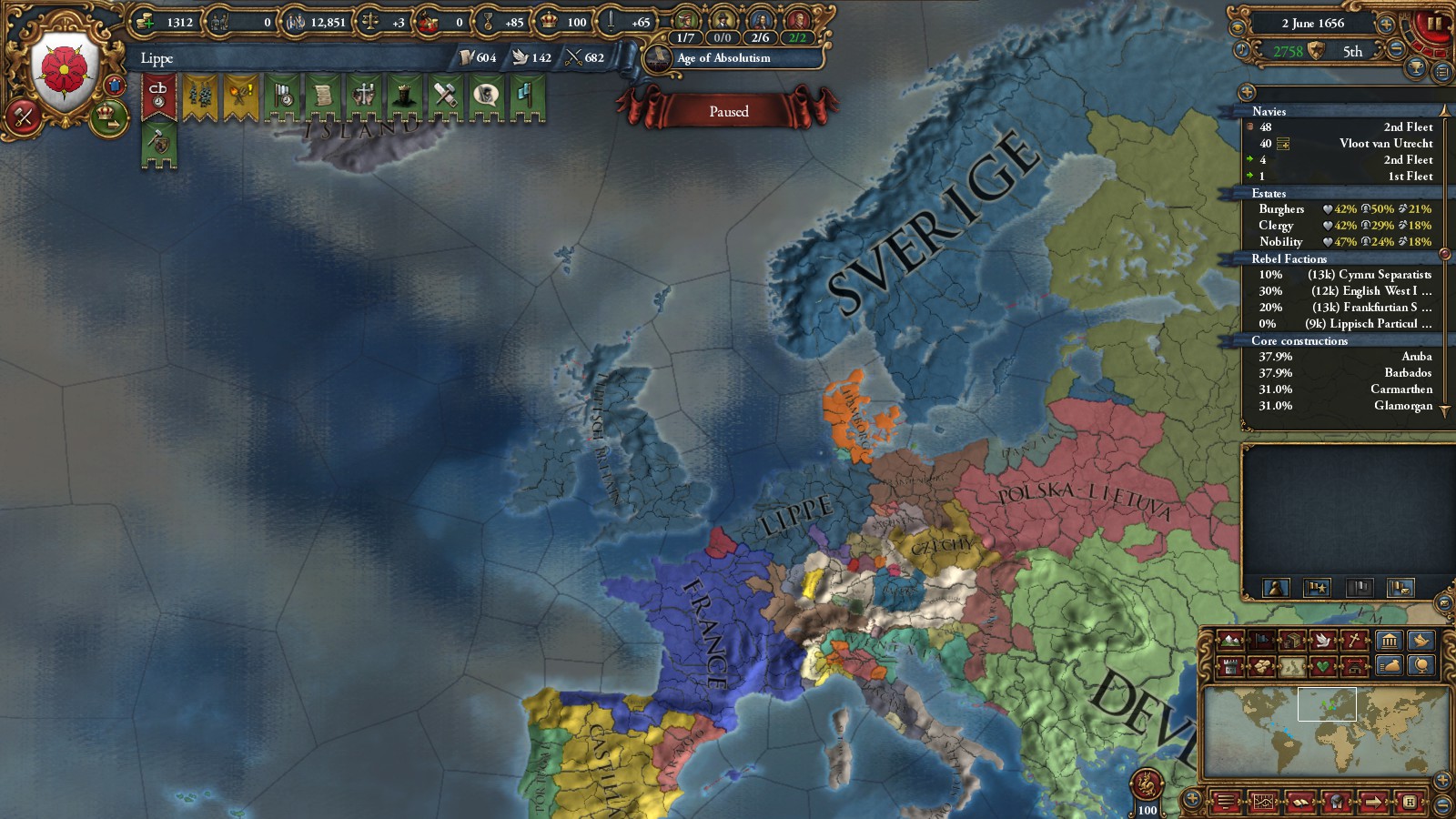 I haven't done any of the other "release and play as" achievements (Wales, Asturias, Man) as the typically employed nation ruining strategies really do not appeal to me. This one was fairly straightforwardly done with releasing Lippe from Berg on day 1. The independence war is not too difficult and after that it is a standard steady HRE OPM game. I got a foothold in the British Isles through Scotland so never had any issues with the wooden wall.
Reactions:
G

The Mongols have united to form a mighty horde!
I am glad for once that the Oirats Horde/Mongol Khanate are actually playable for once, but I didn't expect things to go this smoothly. I ran into a war with Ming very early on and I wiped the floor with them (constant 1000-2000s hits on THEIR land!) so badly they lost the Mandate of Heaven and spawned Zhou into the map. Manchu and other forces would bully Ming from that point on. Is the starting tech between nomads and China difference supposed to give such an edge? I could pretty much do what I want at that point, noone in the area can pose a threat (except Muscovy in the future eventually). The only limits to my expansion are the religious and cultural costs... and not let us talk about tech... 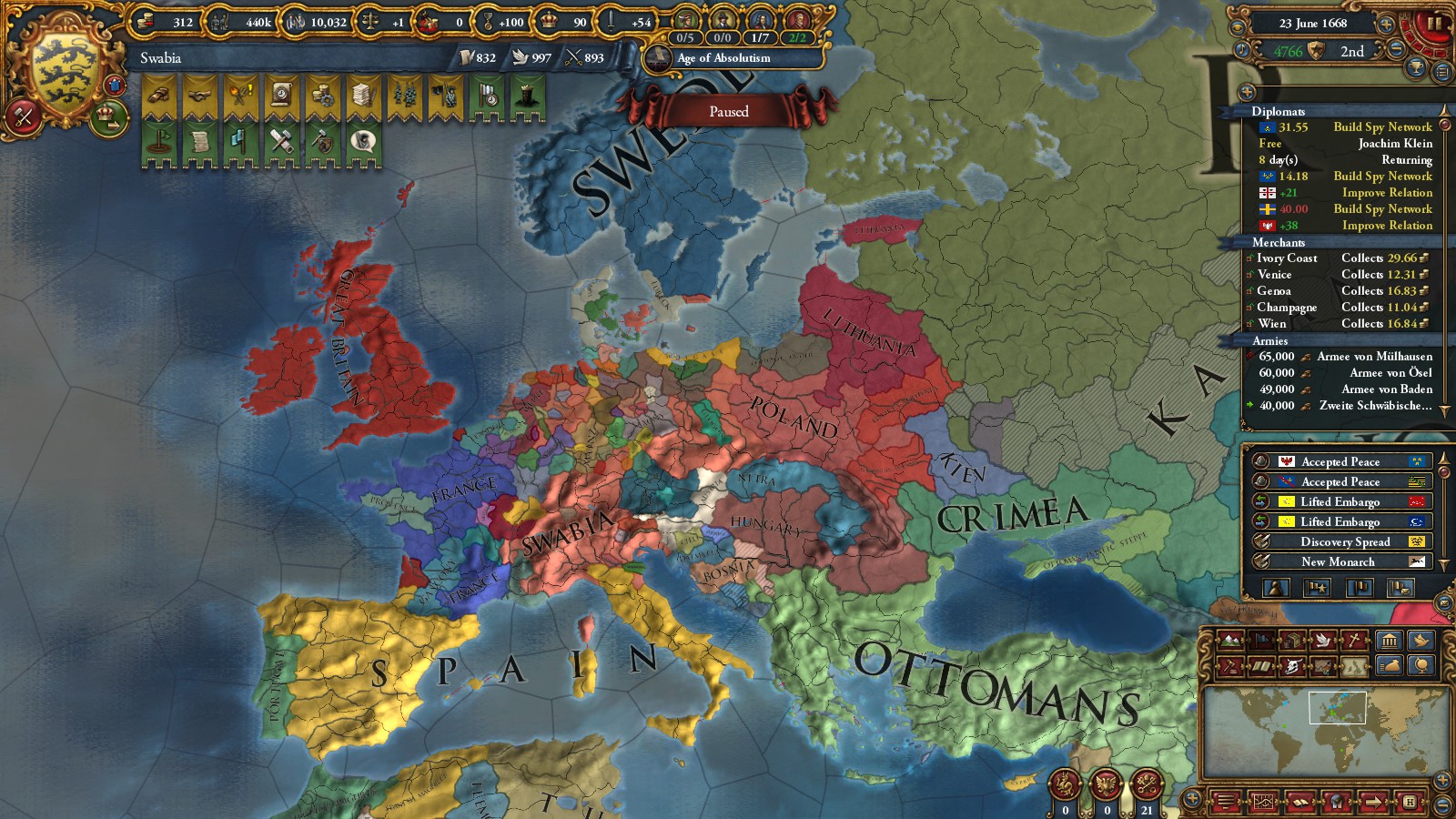 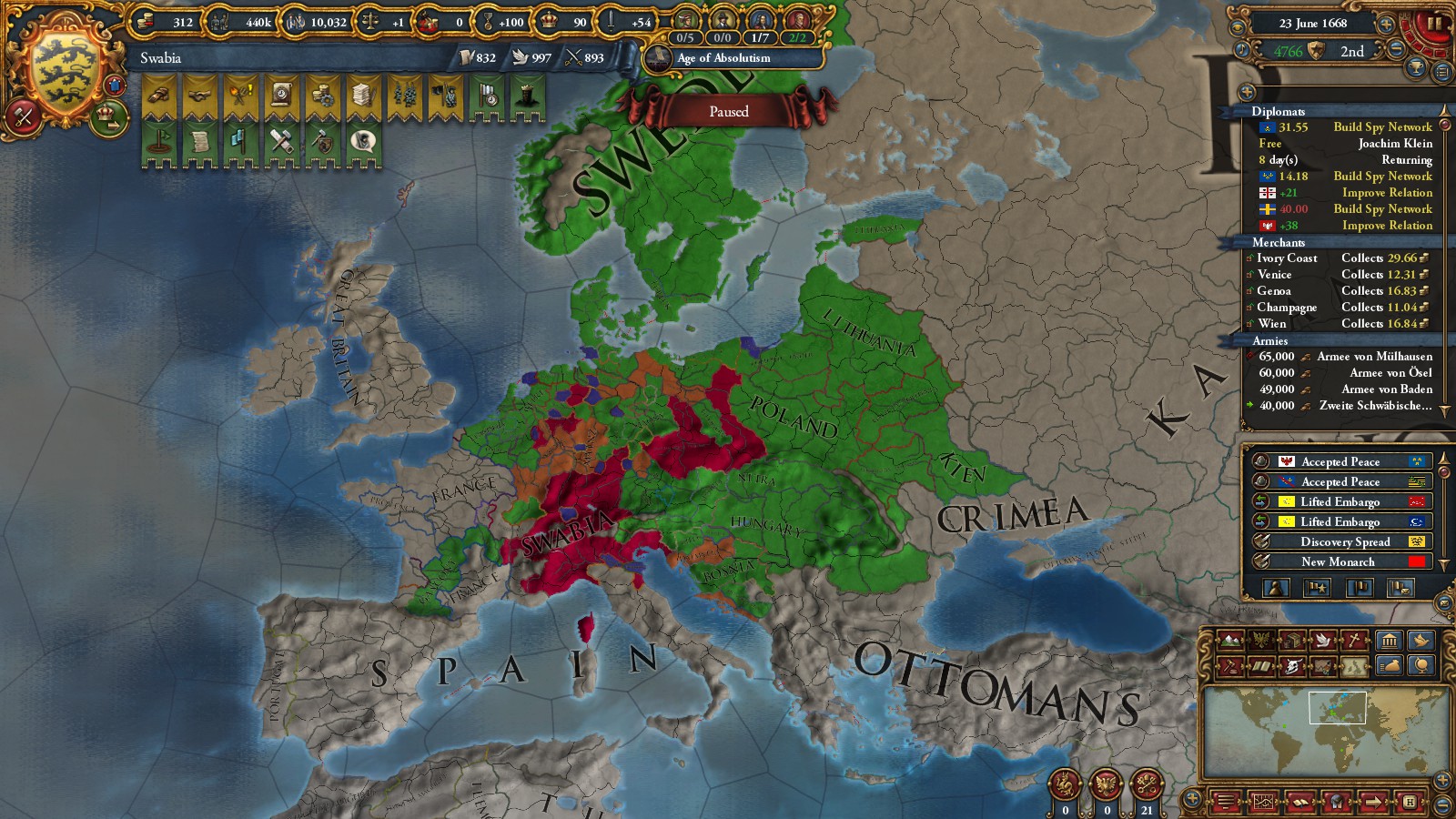 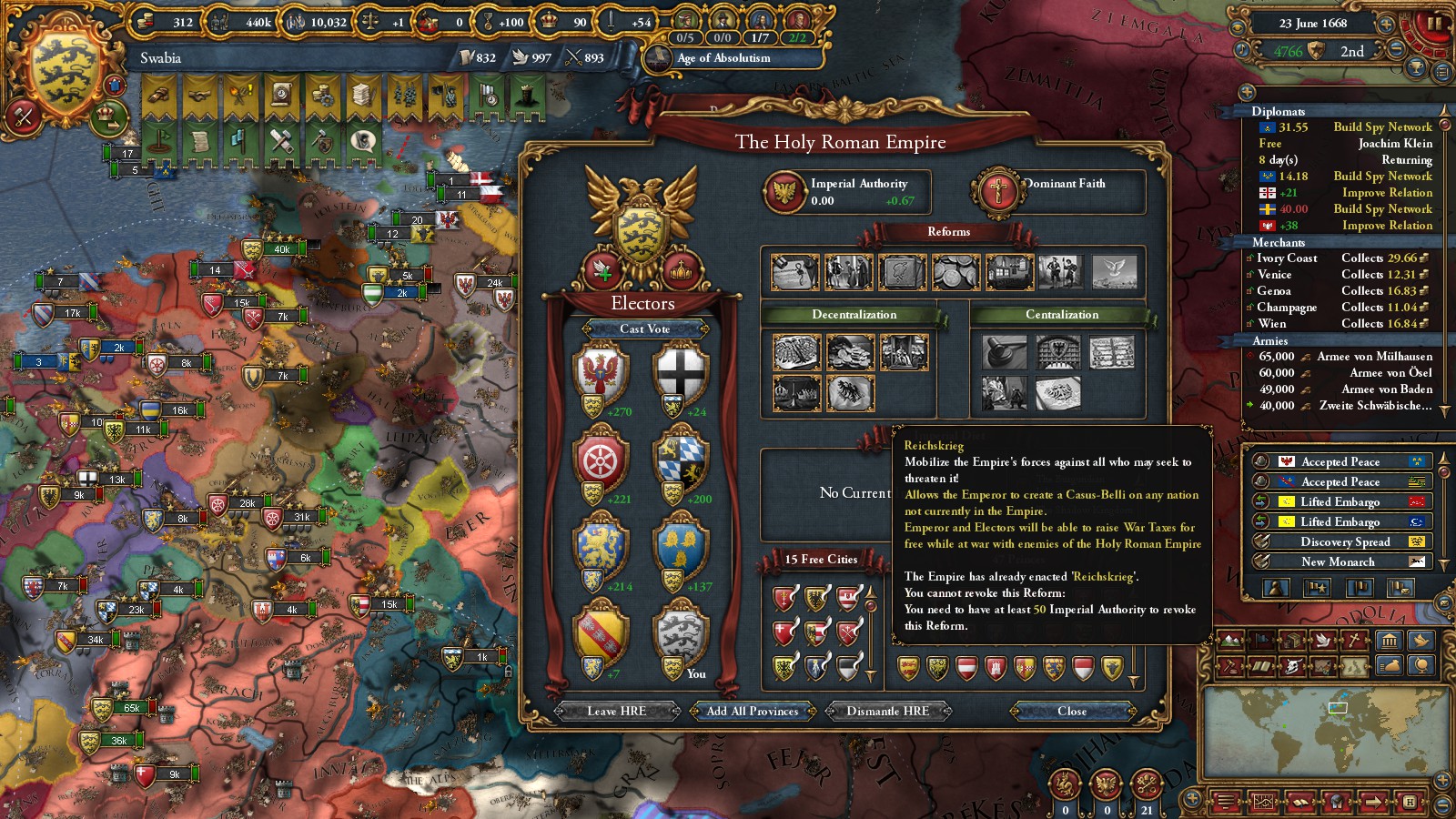 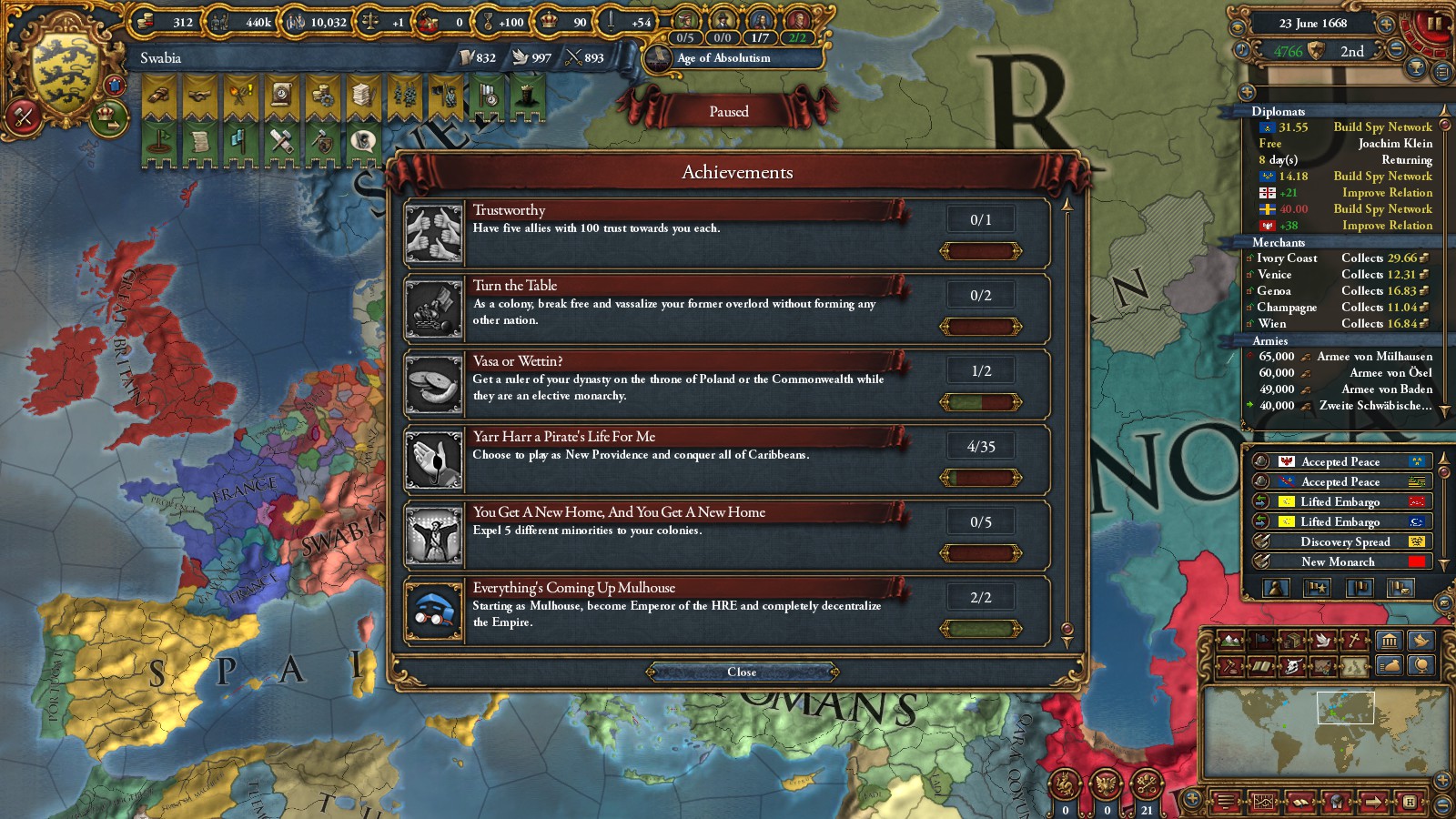 Quite a fun game - my first as any HRE minor. Lucked out with the diplomatic situation at the outset, and was able to annex Baden as soon as I hit mil tech 4. I stayed a republic for about 80 years before I reelected enough to devolve into a monarchy, and I was elected emperor a few years after that. By far the trickiest part was finagling the two swabian provinces away from Austria (this was before becoming emperor); I tried to use my ally France as a battering ram, but they were thousands in debt for decades on end, so I built a coalition of HRE electors that was just big enough to take on Austria. Eventually switched over to ally Spain - they had Naples and Portugal in a PU. I picked up Bohemia and Berg as PUs through claiming their thrones, Flanders and Gelre by accident, and a large Savoy by contesting against Austria. I'm also allied to electors Palatinate, Mainz, Nassau, Brandenburg, and Dalmatia (I just recently inherited Bohemia, and earlier in the game inherited Berg and a very large Savoy), all with high trust; I will probably return to this game to pick up the Trustworthy achievement - and perhaps try out some Realm-War on big bosses Spain and the Ottomans.

Oh, and the Pope has had a hell of a time. Vassalized by Naples, who promptly fell into a PU under Spain. Eventually annexed, they were released in Braunschweig, conquered, released in Bamberg, conquered again, released in Brandenburg, and are about to be conquered once more.
Expand signature
I have an AAR!
Superior Arguments: A Stellaris AAR
3x Weekly AAR Showcase, 1x WritAAR of the Week
Reactions: 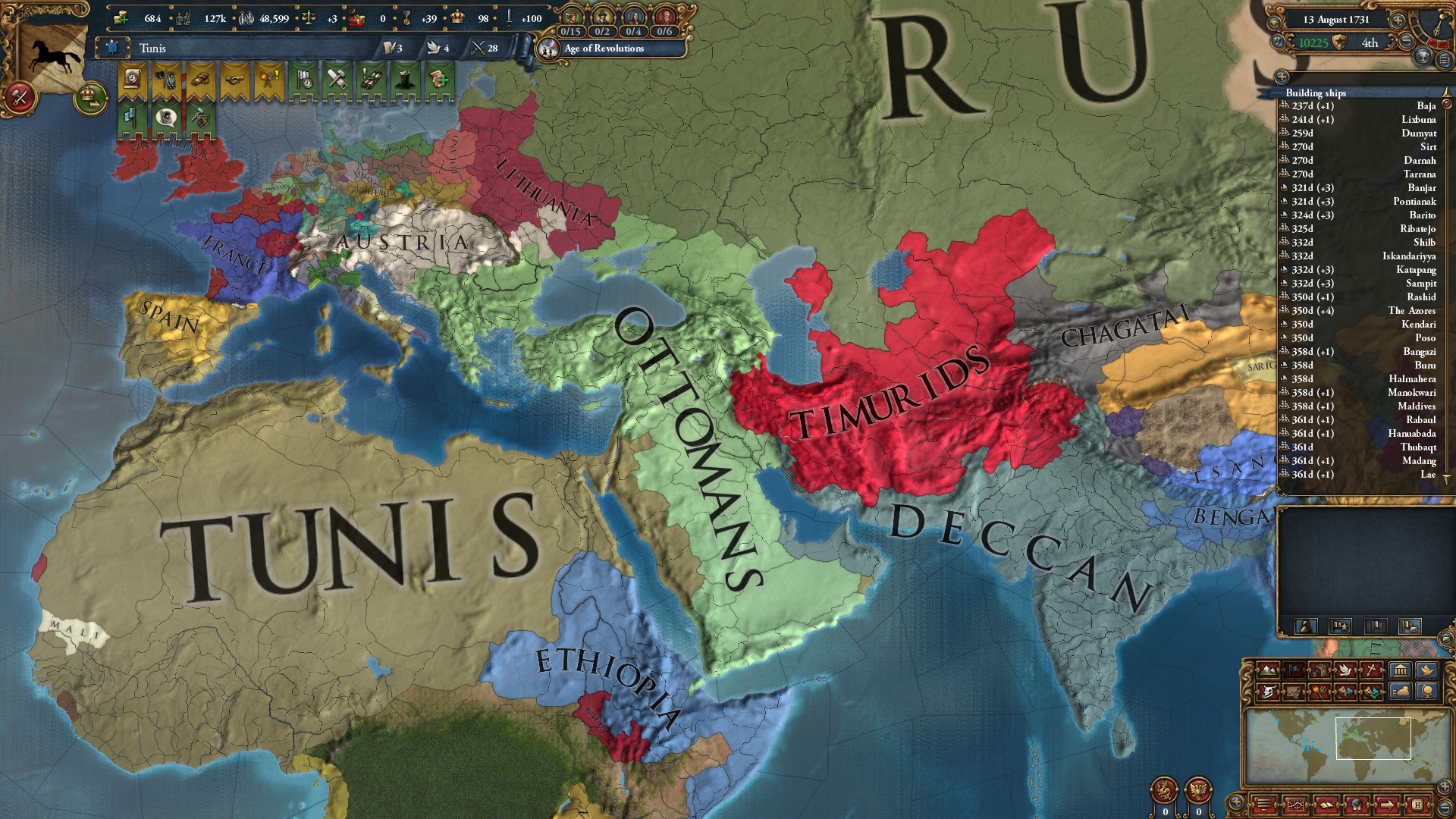 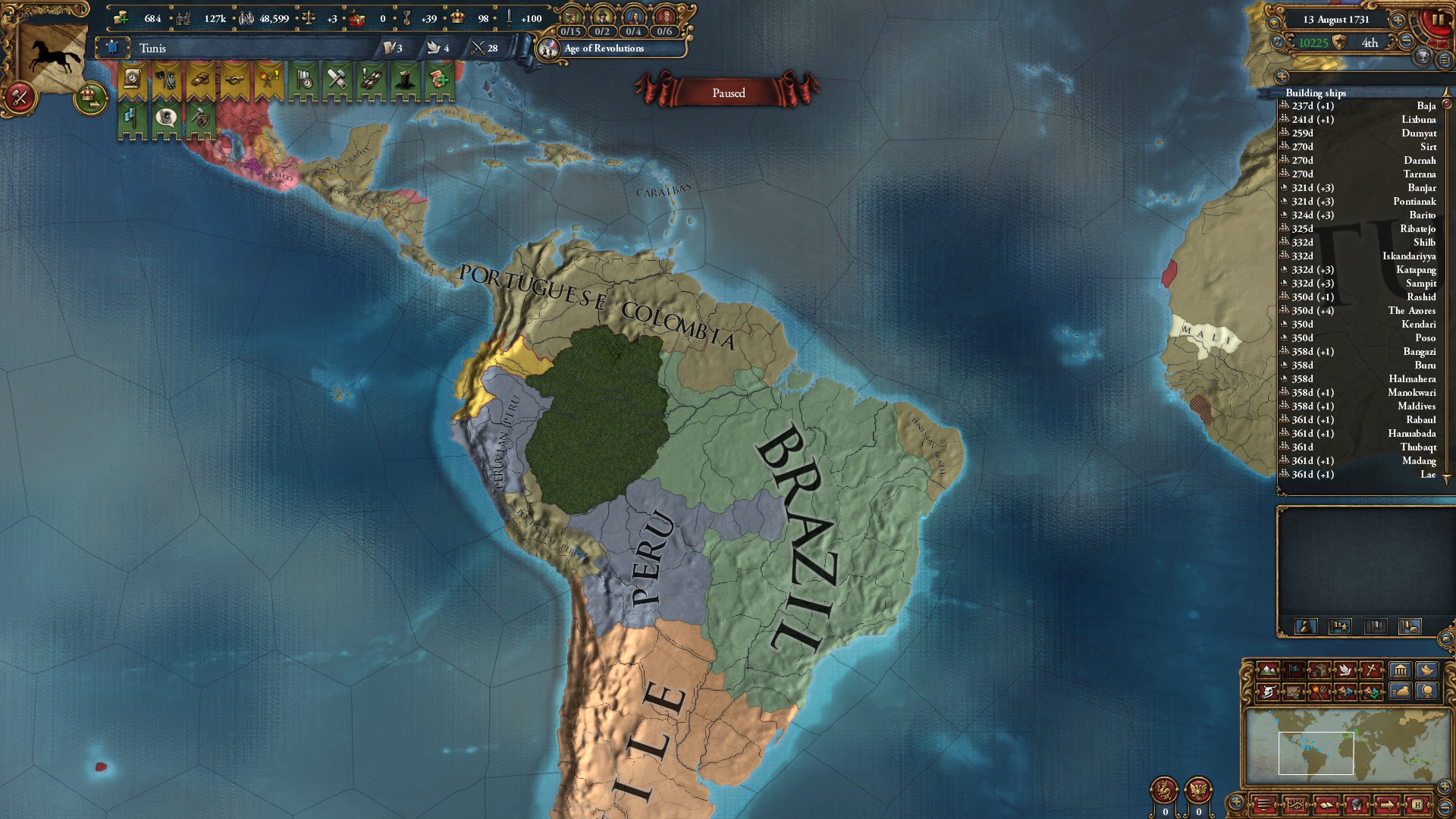 maybe nothing special here but a nice co-operative 2 player game. More a SP game in MP. We never really were able to help each other. just 2 wars against ottomans. mini quiz (easy, i know) what nation did the other player play?

also, I tried if you still get all colonies of a nation you annex. You do. never knew if that was working as intended but always kind of nice. And my conquest of spain made South America go free.... for a time.. we finished the game at that point otherwise i would have taken South America for myself.

oh yes and I got a random PU over Austria. Fought Russia over it because they were my rival. also weird to be able to claim a throne from a rival without any other reason. But I take it.. before that Austria was always an annoying defender of faith.
Expand signature
Reactions:

mini quiz (easy, i know) what nation did the other player play?
Click to expand...

I'd say the same, never seen Deccan forming on its own.
S

On The Rhodes Again 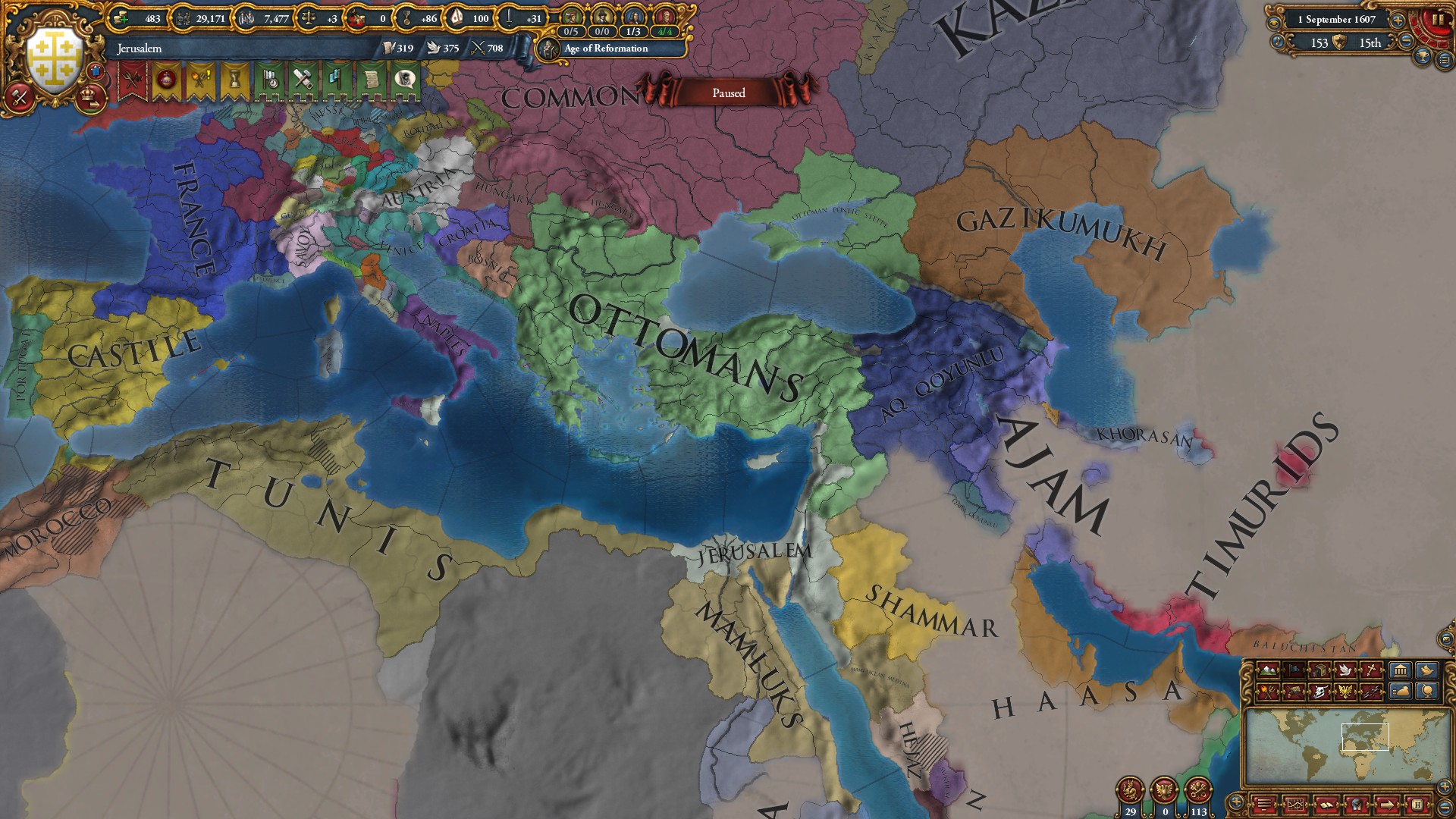 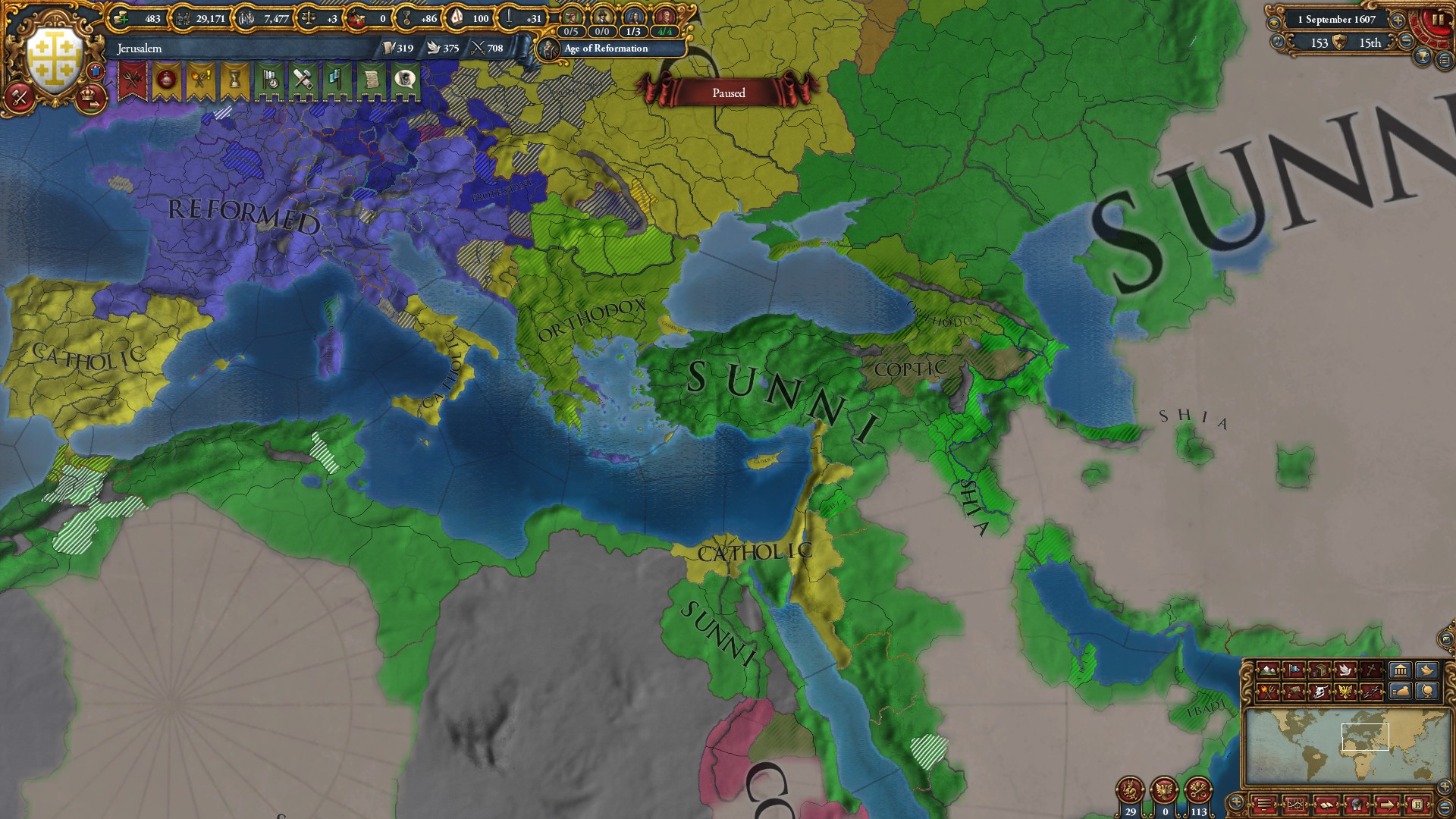 Starting as Knights (got King of Jerusalem too)
Reactions:

Take that Hapsburgs achievement run. I feel like if I was better at the game, it could have been a WC, but I was just happy pulling this off. 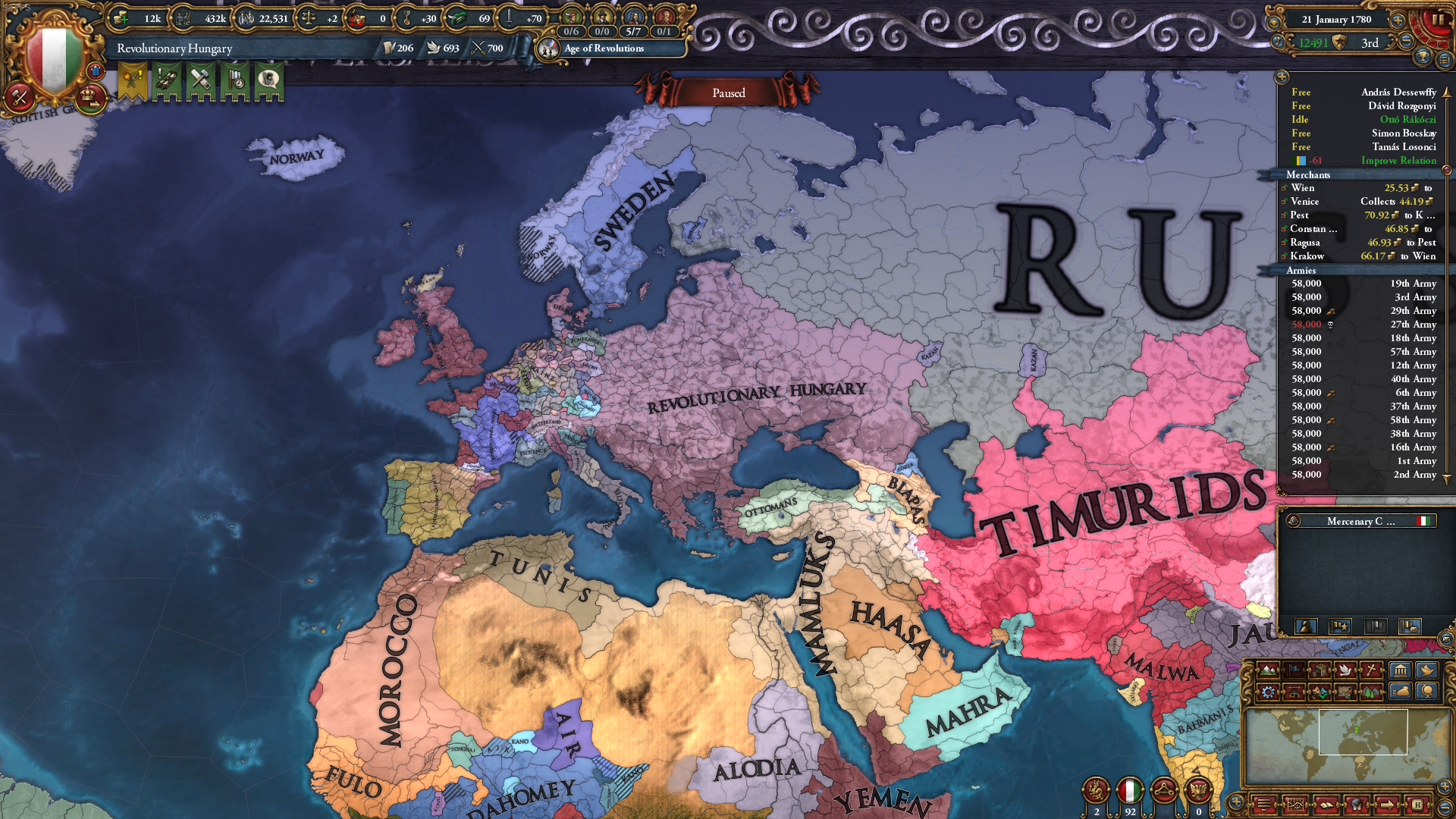 No long explanation on this one, I don't think it's necessary. This has been a personal challenge for a while now. I wanted to get better at EU4 and before I started specifically going for achievements the two nations I decided I would try to get good at the game with were Hungary & Morocco. Hungary missions give you PUs over all Eastern Europe and I wanted to finish it. With 100 years left I did.

Couple of things I did learn from this one.
1. States Generals are the mark of death if you want to retain your PUs.
2. If you go orthodox before completing the Bohemia PU mission, you will not join the HRE.
3. The weaken Austria mission isn't great, because unless they've been hit previously, if Bohemia goes, they become emperor. The last hundred years of this game has been me trying to eat them.
4. Lots of people say it, but few people understand it, at least I didn't. It's ok to lose a war, in some ways it can even be a good thing. I got Dow'd very early on by the Ottos and despite having a number advantage with allies, I had to take the defeat. I still fought them to make sure they only took two provinces, but they were still going to win. That's how it be with the Ottos in the first 50 years. They've got the pips and at most, if you are lucky, you will be able to match them with Moral and Discipline, but not with anything else. Give them way they want and build up. Dev where you can, build to force limit and be ready for the next one.


All in all, a fun run, but I'm not sure I'll take it the last stretch. I'm feeling pretty burnt out and at points I've started to become lazy. I'll just throw stacks of a 120,000 men everywhere and ignore the casualties. If I do go any further it will be for the 1 million soldiers achievement.
Expand signature
The Ballads of Fire and Ash AAR Page
Show hidden low quality content
You must log in or register to reply here.
Share:
Facebook Twitter Reddit Pinterest Tumblr WhatsApp Email Link
Top Bottom