dynalon said:
That's Danish Scandinavia! They actually managed to keep Sweden in line and integrated them before 1550 - first time I've ever seen Sweden not break free.
Click to expand...

I guess Sweden has always been lucky in my previous runs

Although tbh, I'm not quite convinced that is the case. In my experience, Sweden's Liberty Desire will be around the 50% mark as soon as Denmark loses its age ability, and I even distinctly remember that they asked me to support their independence in this particular run. I suppose Denmark's chances are better now that the AI has learned to take "oversea" provinces like the Baltic, Novgorod, and Scotland in Denmark's case, since Denmark seems quite likely to expand in one of these directions. But "nearly always" goes completely against my experiences, even in the last two or three patches (I can't remember when exactly this particular AI issue was fixed).
Expand signature
Super Mario Land really should have been a turn-based strategy game. All you do is jump and run, and if you don't like doing that you just stand around waiting for something to happen.

Feedback is Dumb and It Doesn't matter (Day[9]) 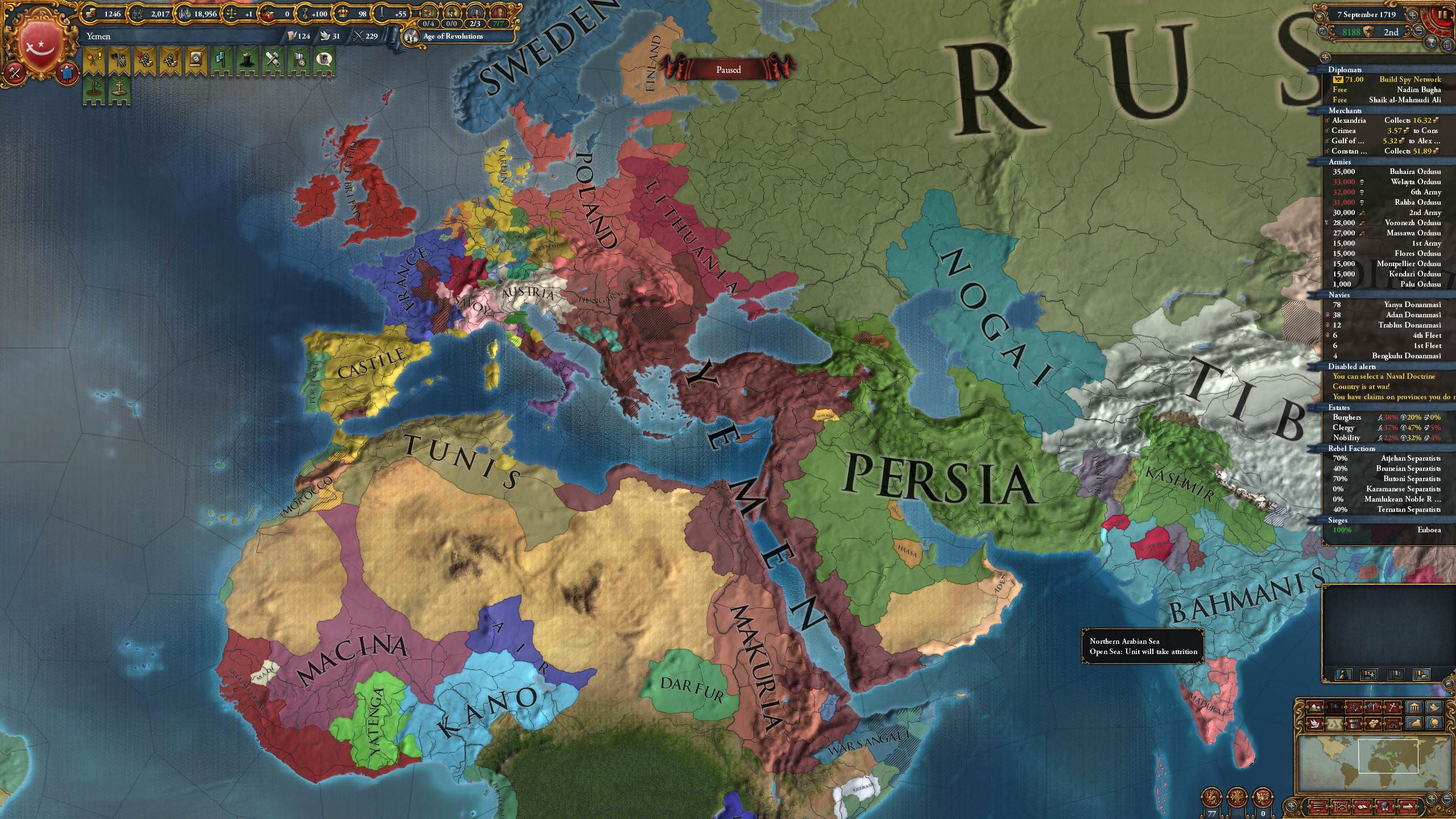 Started as Mamluks, got their achievement, formed Rum, got Paris achievement, propagated religion, also got the 50 innovation achievement (most useless feature by the way, why would one want to invest in monarch points when they're scarce and have discount when they are plentiful?), converted to Coptic for their achievement and finally formed Yemen for their.

The weirdest thing was that Russia had 0 artillery with ~170k infantry and several horses. One other observation was that Castille was absent from colonization, only focusing on Africa.

Lets not make every war a total war
https://forum.paradoxplaza.com/foru...ccupied-but-we-wont-surrender-because.856002/

So I've taken a layoff from playing for past 5-6 months and just jumped back in after picking up CoC and RB. First game back playing as Mamluks and it appears the game misses me... 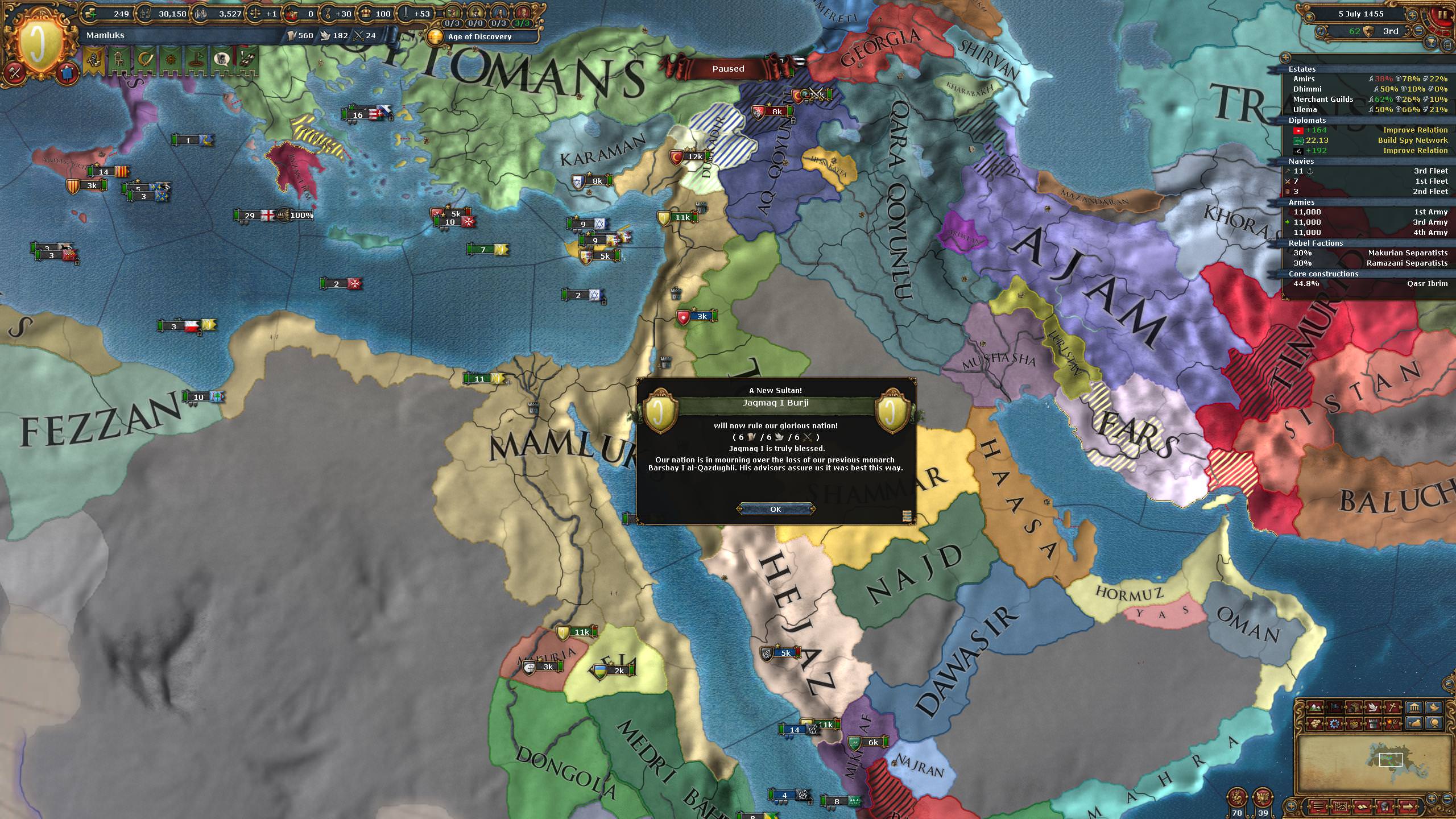 Over 2000+ hours in the game and first time to ever get a 666 heir. What a wonderful welcome back gift.

Soulburger said:
So I've taken a layoff from playing for past 5-6 months and just jumped back in after picking up CoC and RB. First game back playing as Mamluks and it appears the game misses me...

Over 2000+ hours in the game and first time to ever get a 666 heir. What a wonderful welcome back gift.
Click to expand...

And then the hunting accident... oh wait, Mamluks doesn't have heirs anymore.

6/6/6 are around 4 times more common this patch due to a bugfix.
Expand signature
Back to the forums.

Sfan said:
6/6/6 are around 4 times more common this patch due to a bugfix.
Click to expand...

Hey I'll take it! What was the bugfix?

Soulburger said:
Hey I'll take it! What was the bugfix?
Click to expand...

They removed an unintended -1 on all stats for rulers and heirs you get via events.
Expand signature
Franco-Turkish alliance(with Czech bonus)

My Dutch Hegemony run, I started as Holland. 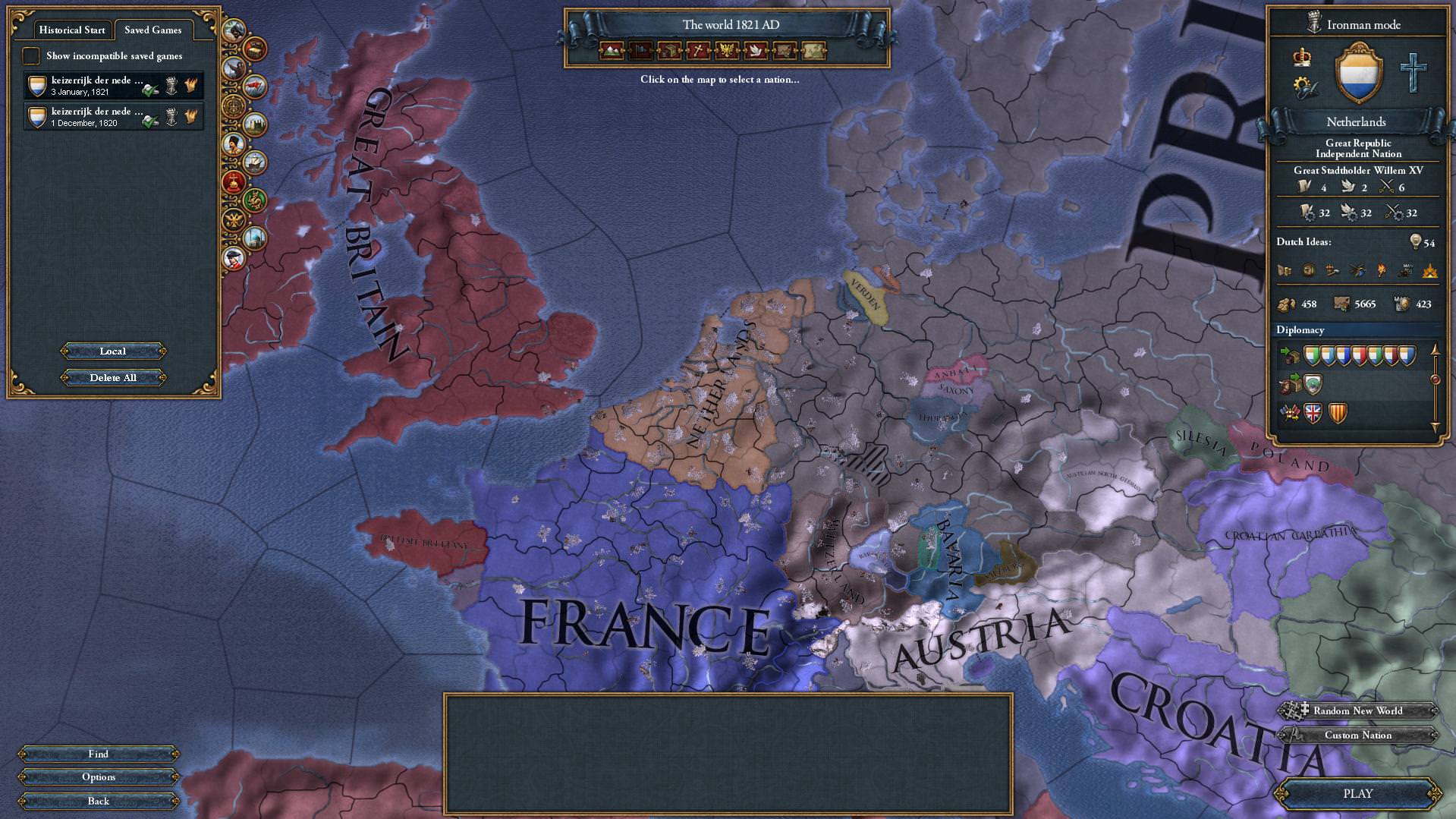 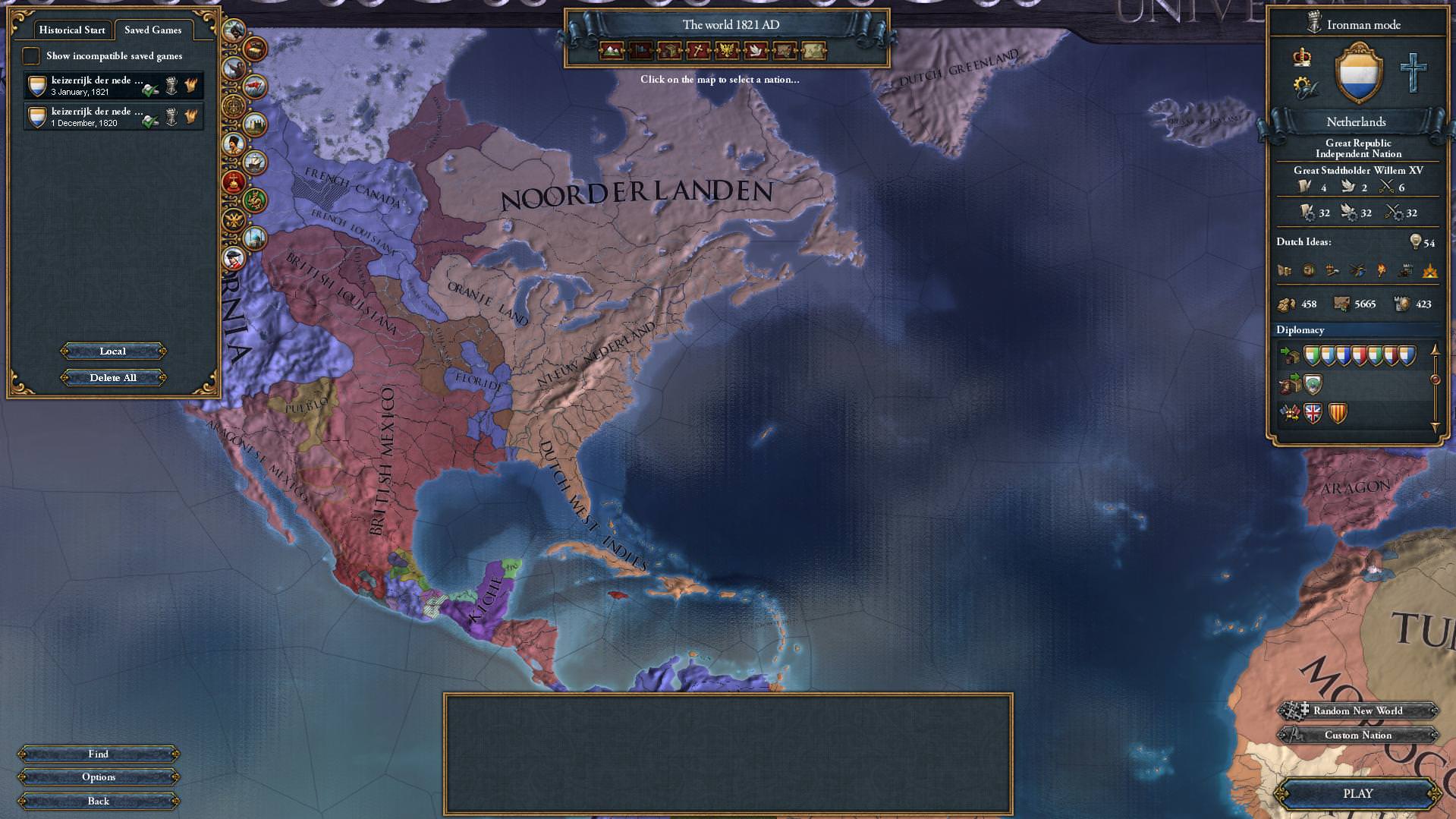 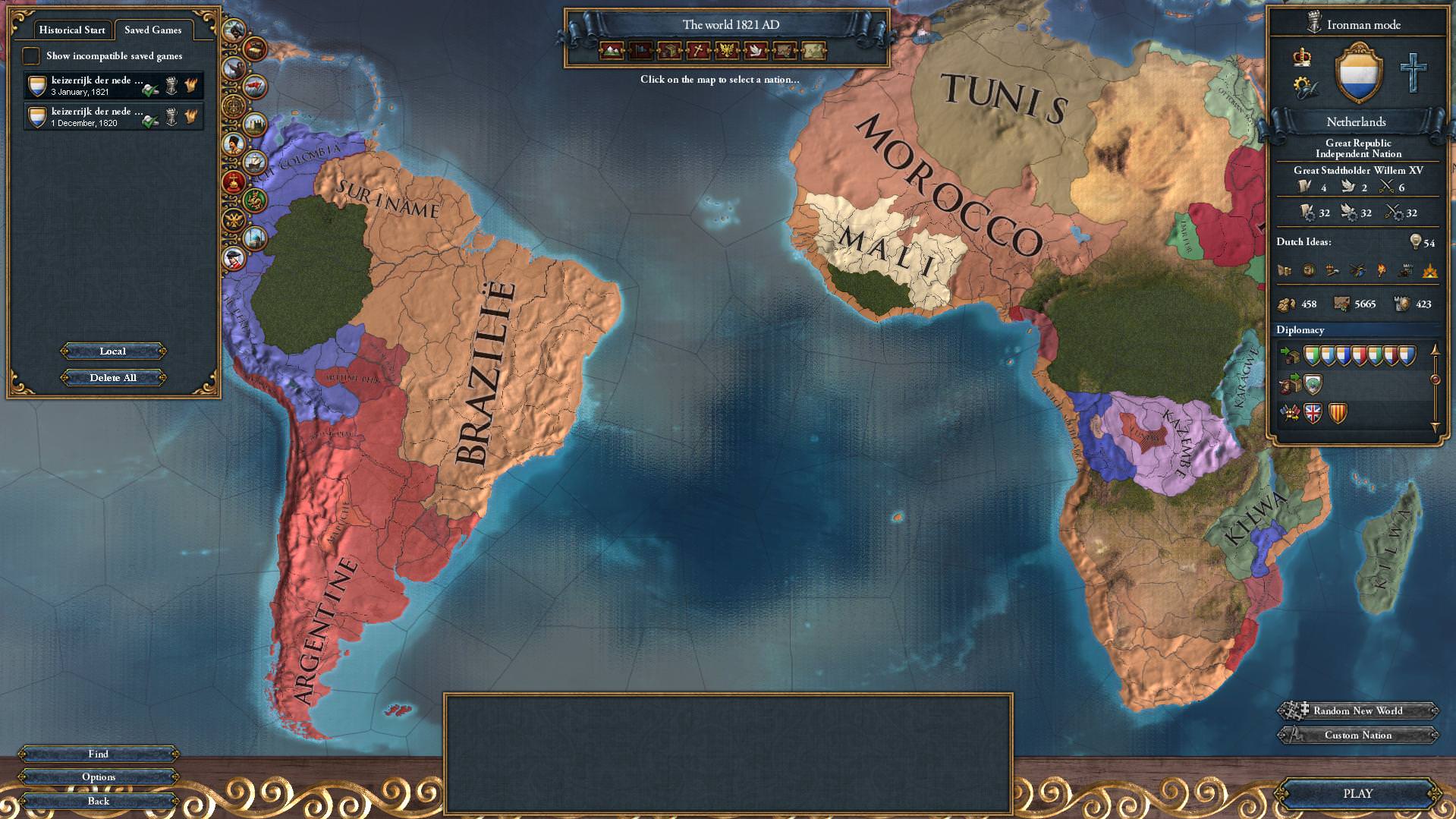 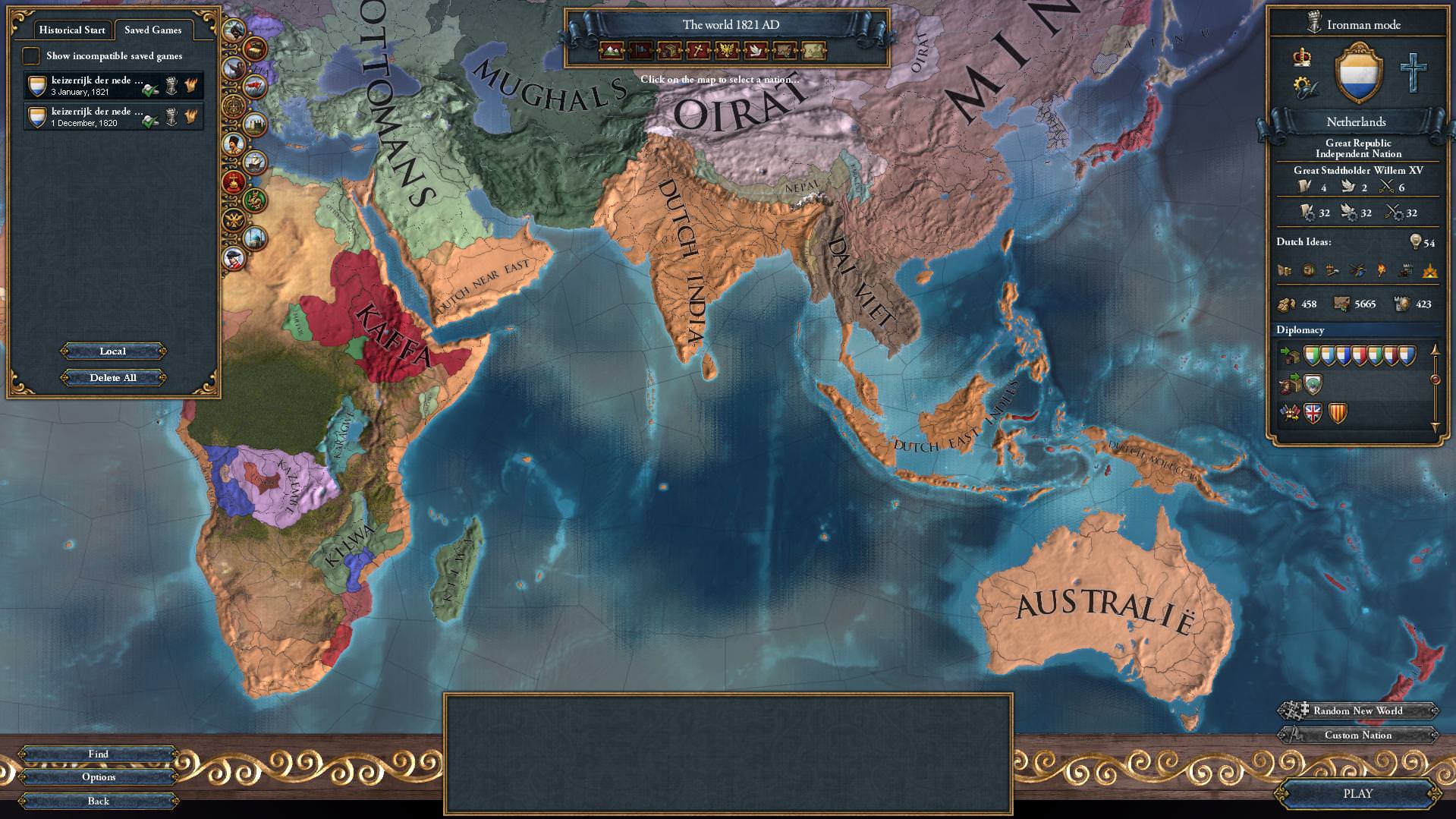 That Prussia! I'm sorry, but I can't comment about your (very nice) Netherlands when Prussia literally conquered half of Europe in AI hands!
Expand signature
Back to the forums.

I find that Prussia a little hard to believe tbh. AI conquering Poland... plausible. AI coming within 2-3 provinces of forming Germany is a little too much.
Expand signature
Franco-Turkish alliance(with Czech bonus)

We've seen AI Prussia forming Germany (@Kagerou.Echo.三葉 had it iirc), so why not? Especially with player intervention. Netherlands can very well have been their very loyal ally feeding them land for the entirety of the campaign, that makes sense to feed Prussia and make them a BFF if you intentionally do not want to expand outside of Low Countries in Europe. What impresses me is how they blobbed in Scandinavia, too.
Expand signature
Back to the forums.

Prussia (BB) was since the beginning of the game my ally and I helped them along the way. At some point Prussia got Denmark under PU and they ended up inheriting them.
Expand signature
EUIV: Dutch Empire | Ottoman Empire | Swedish Empire | Oda Dynasty | Greek Empire | Korean Empire | Mongol Empire
AAR: Return of the Third League - A Pisan AAR

Sunspawn said:
I find that Prussia a little hard to believe tbh. AI conquering Poland... plausible. AI coming within 2-3 provinces of forming Germany is a little too much.
Click to expand...

Prussia is quite prone to snowballing out of control once their powerbase is secured, especially when the ruler is militarist (quite likely with Prussian Monarchy and their 6 mil rulers). Maybe since their major ally (you) is to their west, they expanded more to the east instead of going after the required provinces for Germany. In my game where AI formed Germany I played Russia so their aggression had no direction to go but west.

Mucking about since I was bored and I get this 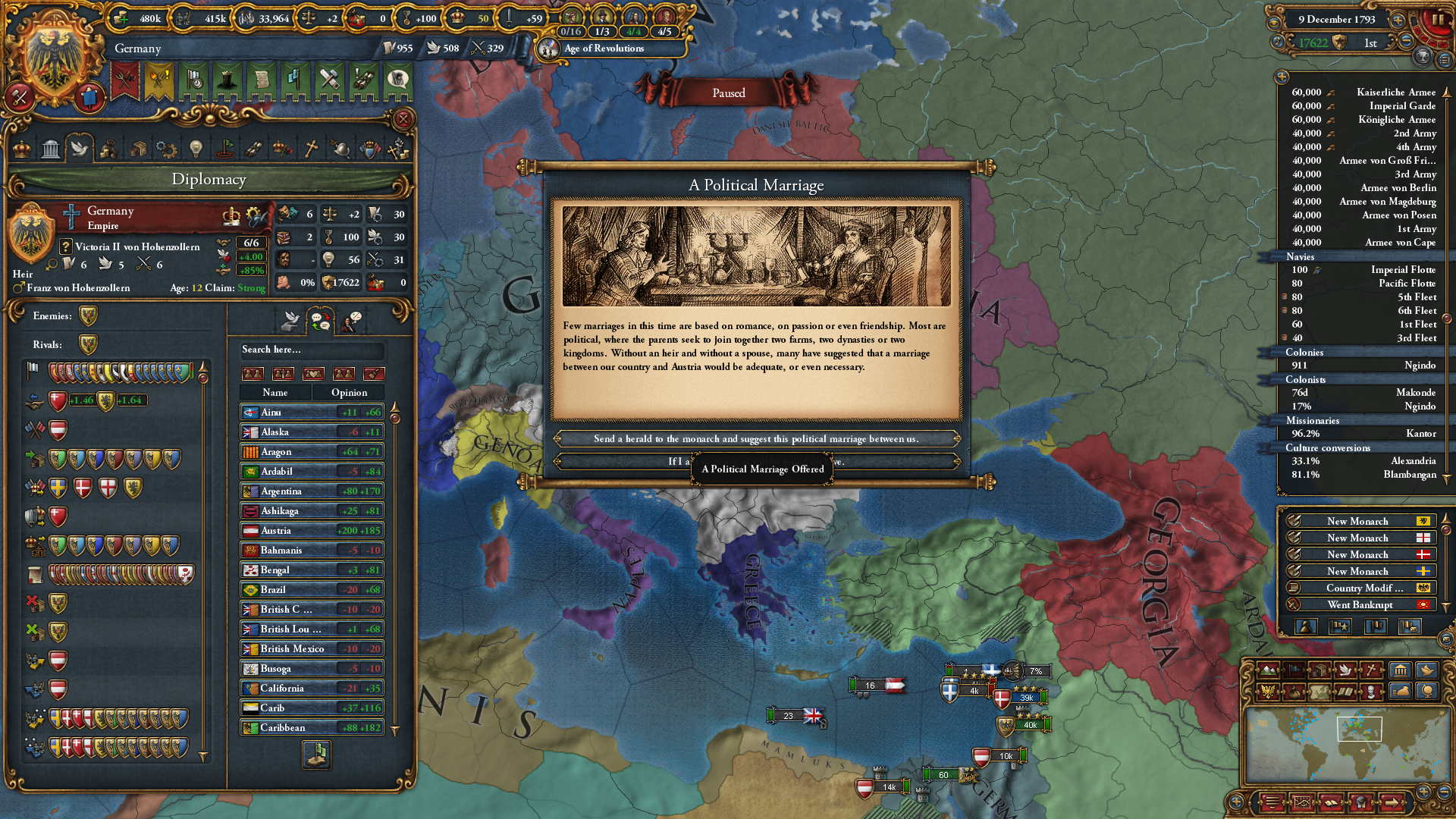 Did the same thing as I did on my previous run, but without Ironman on since I was bored (and wanted to play past 1821 nice and easy)

(Earlier run is also in this thread, couple pages ahead)
E 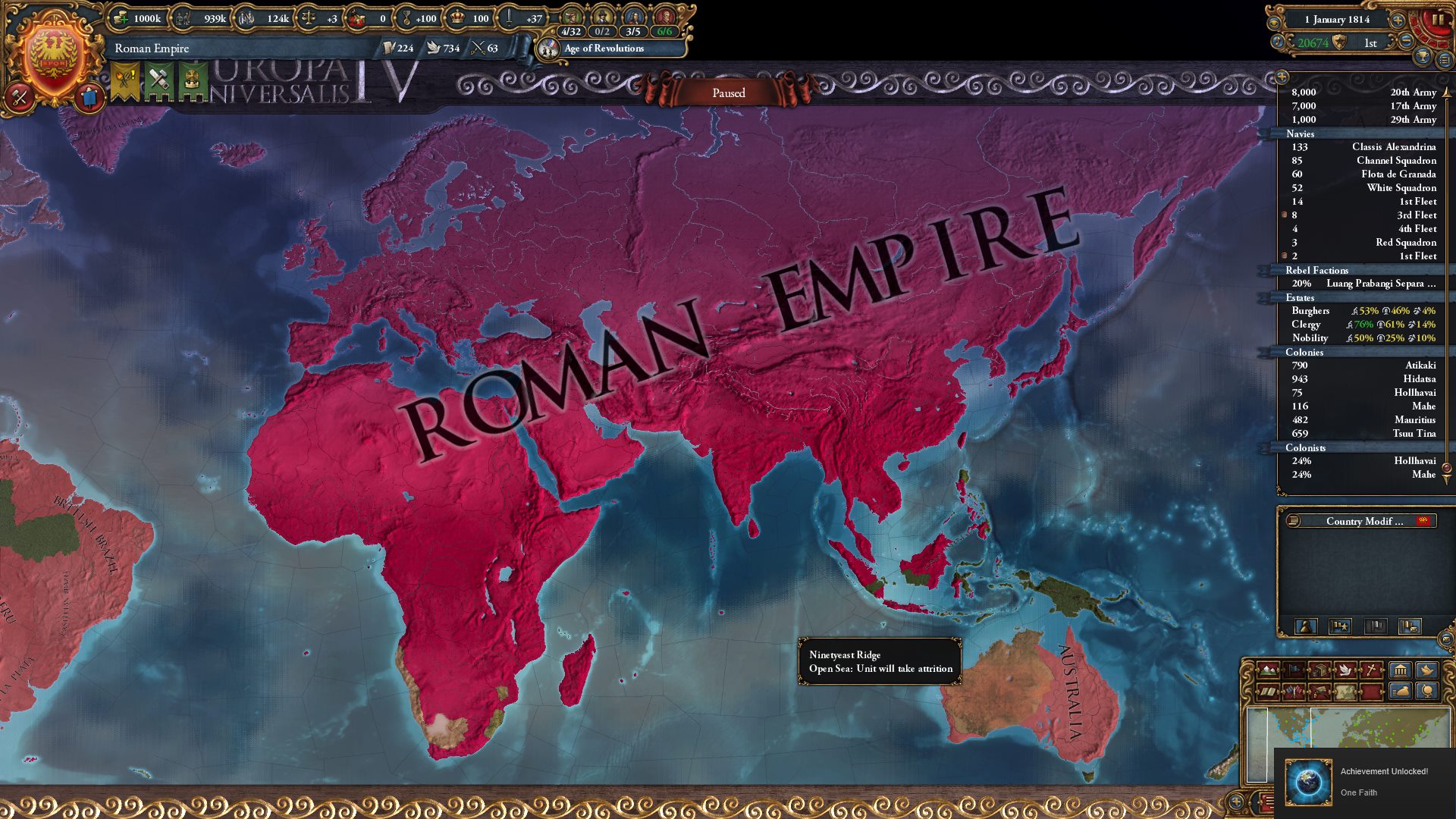 Expand signature
Determinism in EU4 and prior games: https://forum.paradoxplaza.com/foru...essage-to-paradox-development-studio.1342219/

So; I decided to have an Austria game. Occasionally I feel like playing a semi-major and Austria's interesting enough; being HRE police and whatnot. Specifically; I'm subscribeing to the thought in this campaign that since every single nation generates it's own monarch points and events; the optimal long-term play is to let the AI minors develop; then eat them.

Firstly; I finally managed to get Bleed Them Dry. It's something I've always been a little short on.

Secondly; despite me and France pounding Burgundy; no Inheritance. Well; I guess that makes things more interesting. 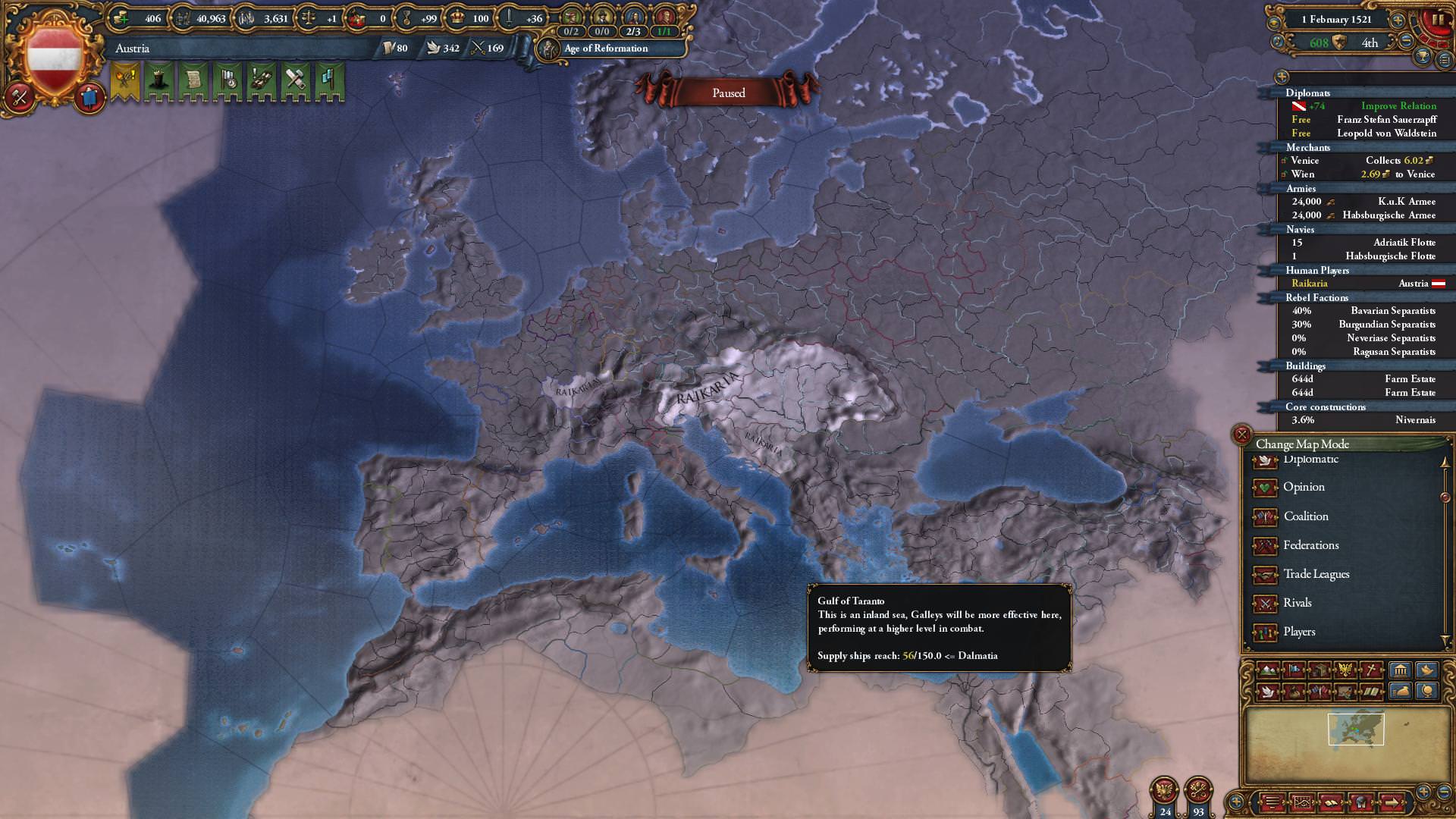 Player mapmode. I did get Hungary. I was allied to Bohemia and couldn't be asked to PU them when the chance arose; I was busy elsewhere anyway. Not bothered about eating Switzerland. I only took a province off Bavaria because they'd already devved it high between events and manual dev, and I also needed to take it to reduce the warscore of something else from 105% to 77%. 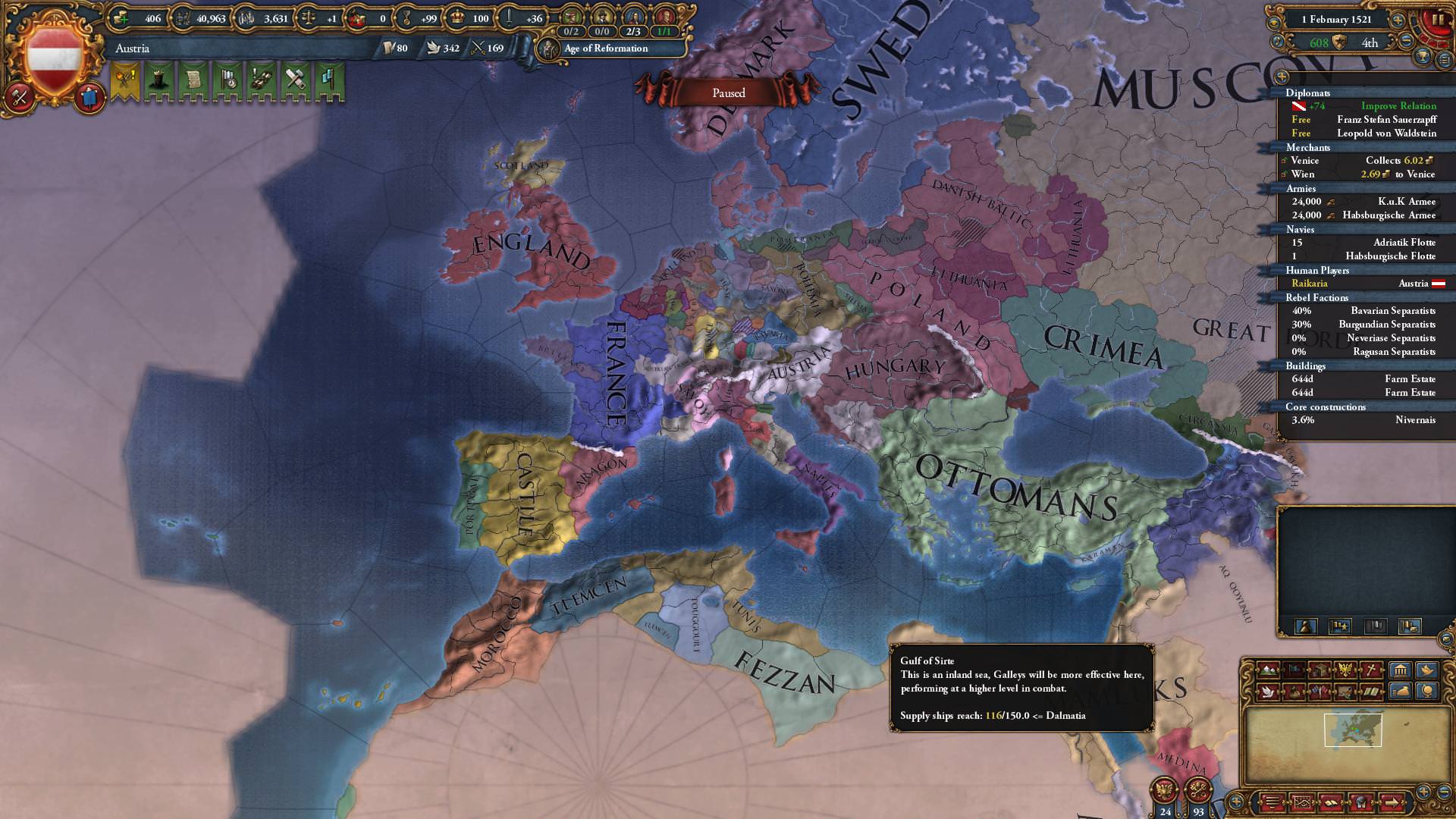 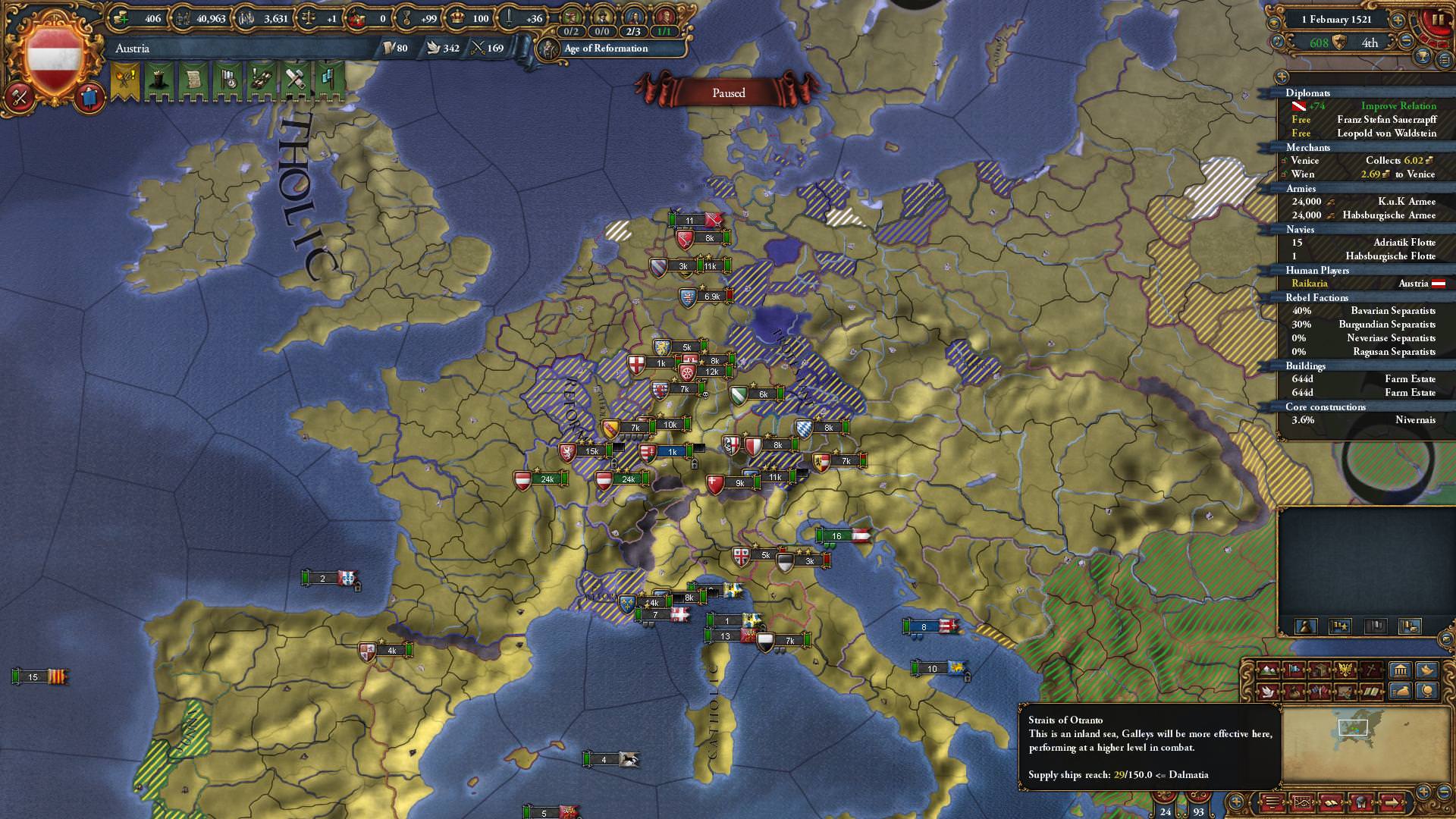 But here's what I'm really proud of. It took 2 no-CB's and a war with France; but I've managed to quash all of the Centers of Reformation. At least; unless someone else flips Reformed. And considering Luxembourg and Lorraine have already been forced to Catholic from Reformed by me already...

The aformentioned Bavarian warscore was for forcing them Catholic from Protestant.

Sadly a few OPM's have managed to stay Protestant; but they don't have CoR's; and I'd probobly have to No CB each one of them individually. Odds are more likly; as heretic OPM's; that they'll get eaten up and converted by someone else. And if the chance arises; I'll convert them myself. 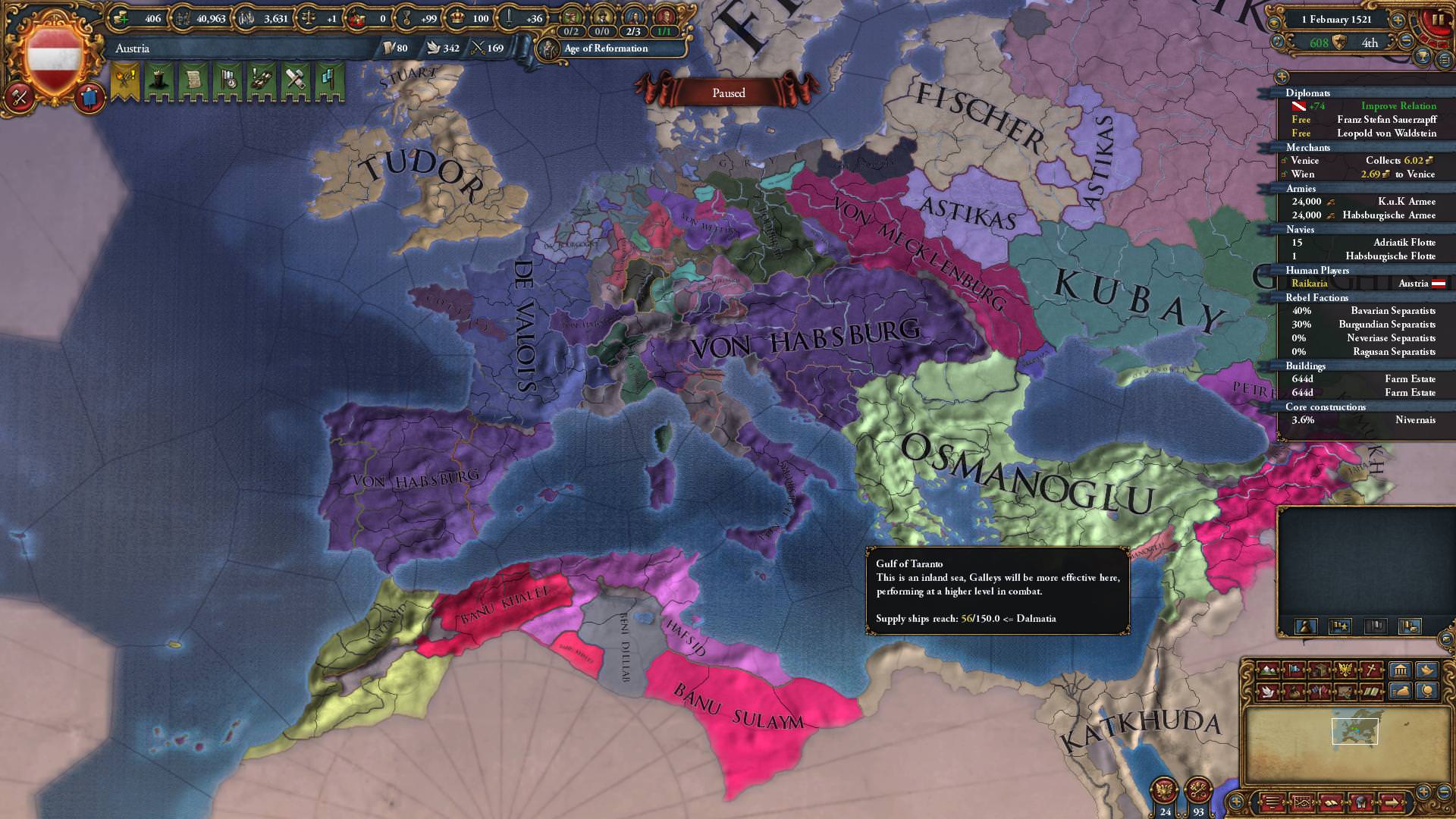 Look at that Iberia. Castile got the wedding; and then spread my dynasty to Portugal for bonus points. Also; I got the event which put an 14 year old heir on Milan; which prevented the Ambrosian Republic fireing since they never went into Regency/Low Legitimacy. With it only being 1521; there's quite a good chance I could end up with Spain; Portugal and Milan under PU's.

With the Reformation crushed; 41 princes in the Empire [Including Burgundy]; no-one outside the HRE owning land inside the Empire; only 3 Heretics; and 8 Free Cities [Ulm; Luxembourg; Memmingen; Nurenburg; Hamburg; Frankfurt; Bremen and Aachen], it seems like it should only be a matter of time until I turn into the HRE itself; although constant infighting is keeping authority gain somewhat low [0.08]. I don't care if the Reform is slow however; at this point it's near-guaranteed. Especially once I eventually annex Hungary and add their provinces in.

Just started a Castile run, taking a step away from my Germany fetish, and I get this right off the bat. (Apparently Aragon got the talented&ambitious daughter event too, and his king kicked the bucket almost immediately after.)

Gonna break Portugal to pieces and dominate the new world I guess. 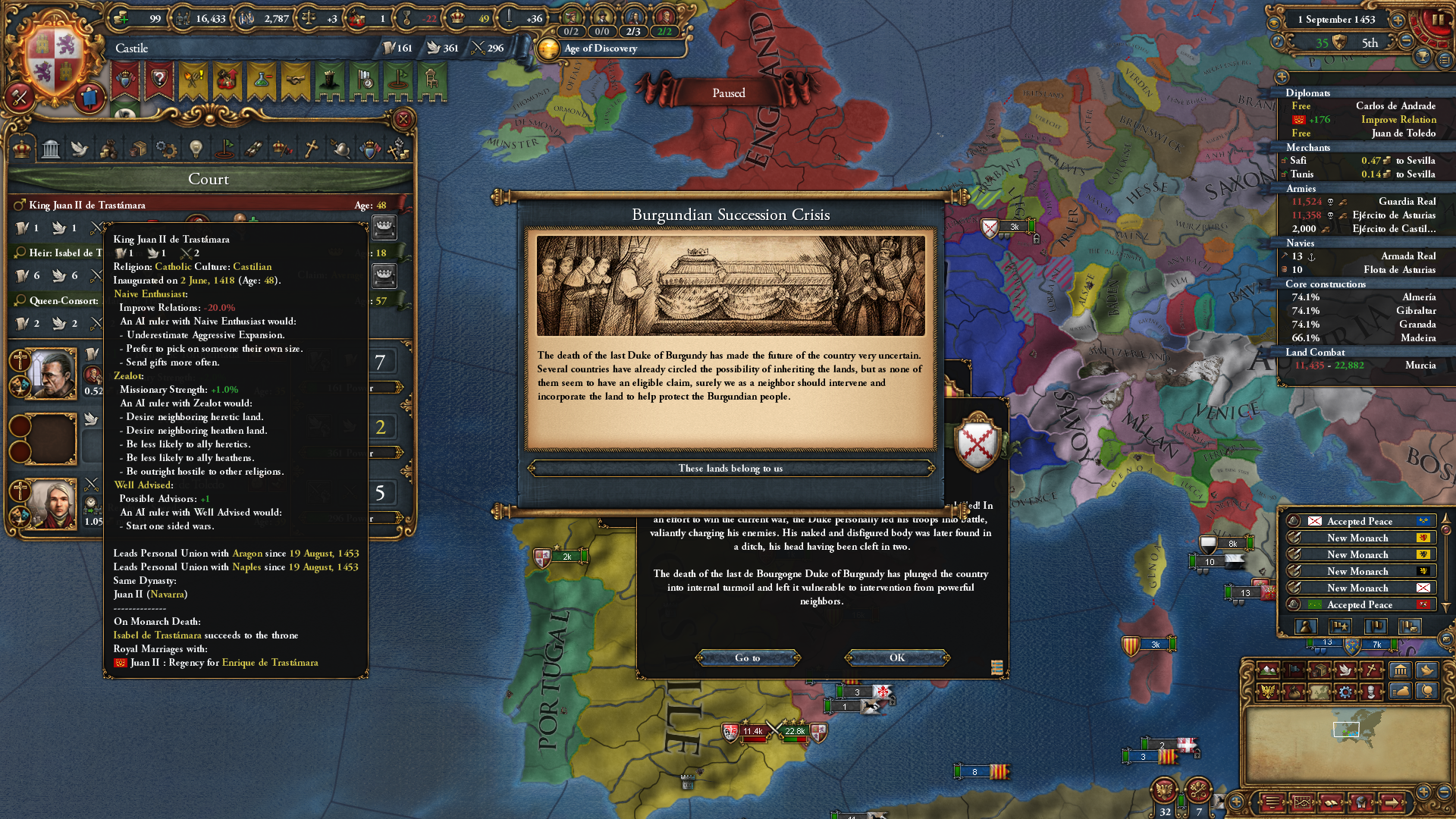 Nice, was looking for this thread yesterday!

Here is the summary of my Norway game