Menu
Install the app
You are using an out of date browser. It may not display this or other websites correctly.
You should upgrade or use an alternative browser.
Europa Universalis IV 74618 EUIV: Suggestions 15736 EUIV: Technical Support 5557 EUIV: FAQ & Strategy Guides 176 EUIV: AAR's, Let's Plays, and Fan Fiction EU IV: Alternate History Short Story Contest Contr 26
Show only dev responses
S

The war cry of the Animal Kingdom of God: Zeus Vult!

My last Bohemian game and my best game ever :

I really realized how the HRE mechanic was broken and how snaking and vassal feeding were powerful, ridiculous and gamey ways of playing.

I revoked the privilege in 1716, and stayed allied with France to the end. I am protestant and my vassals are those spots in Russia and North India, as well as Vijanagar and Mandchuria. 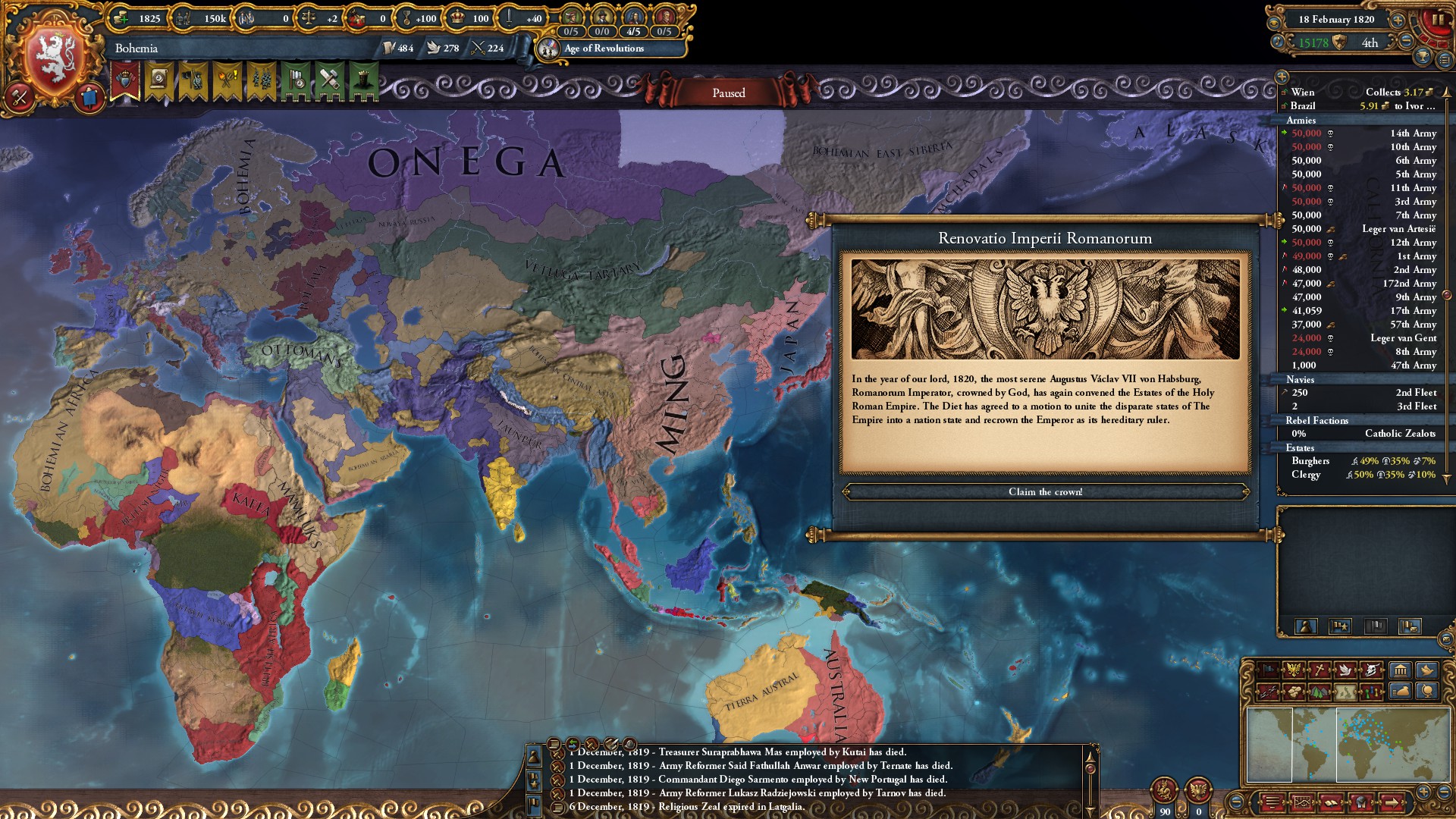 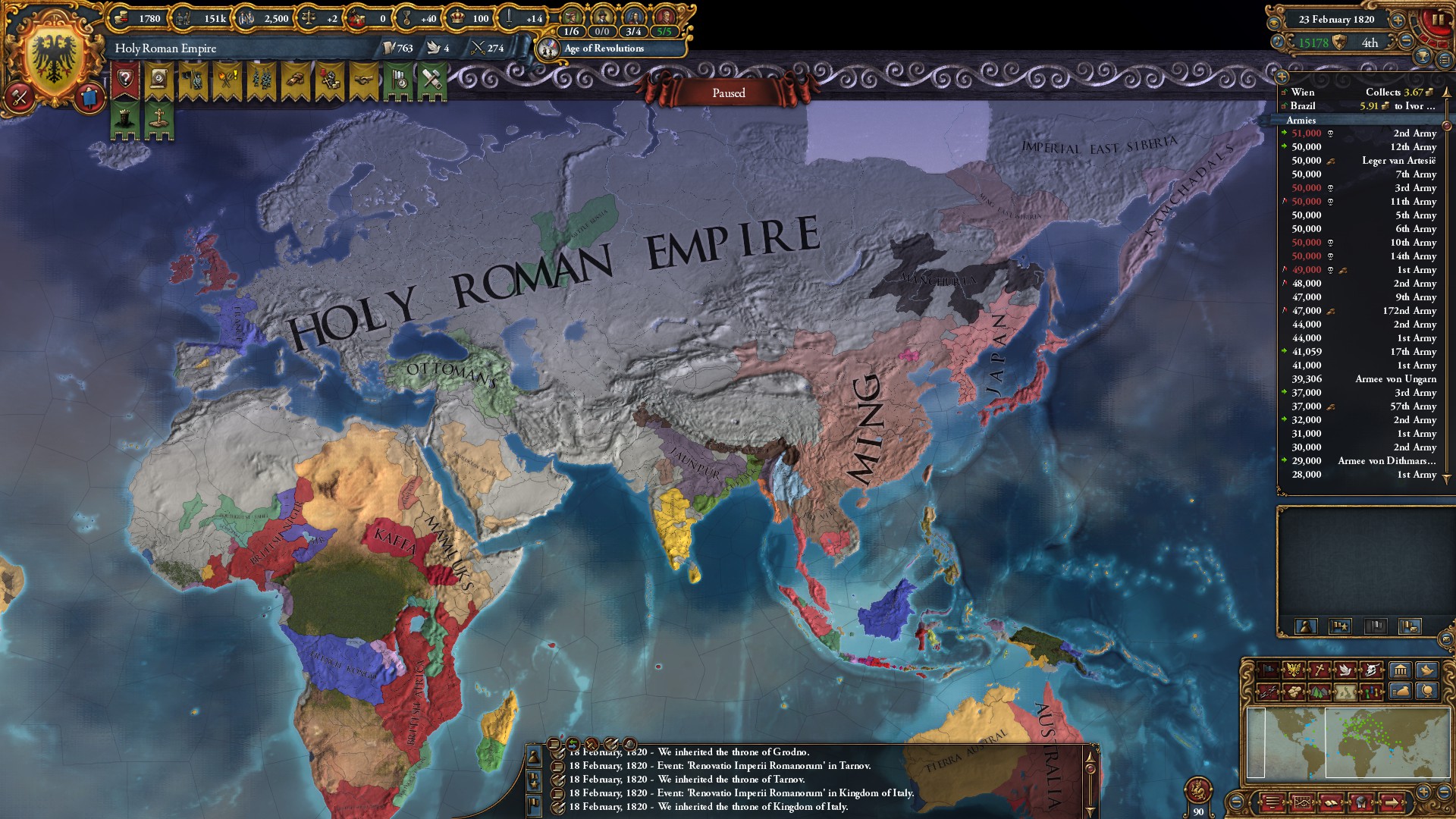 This is the most heretical thing created. Getting Ideas Guy, with a Prussian culture Shinto nation in High American tech group. Siberian-frontiered the entire continent of NA. If i wanted to can easily get SA too.
(Bonus points for Hohenstaufen, was rolling the dynasty name to get a decent sounding one) 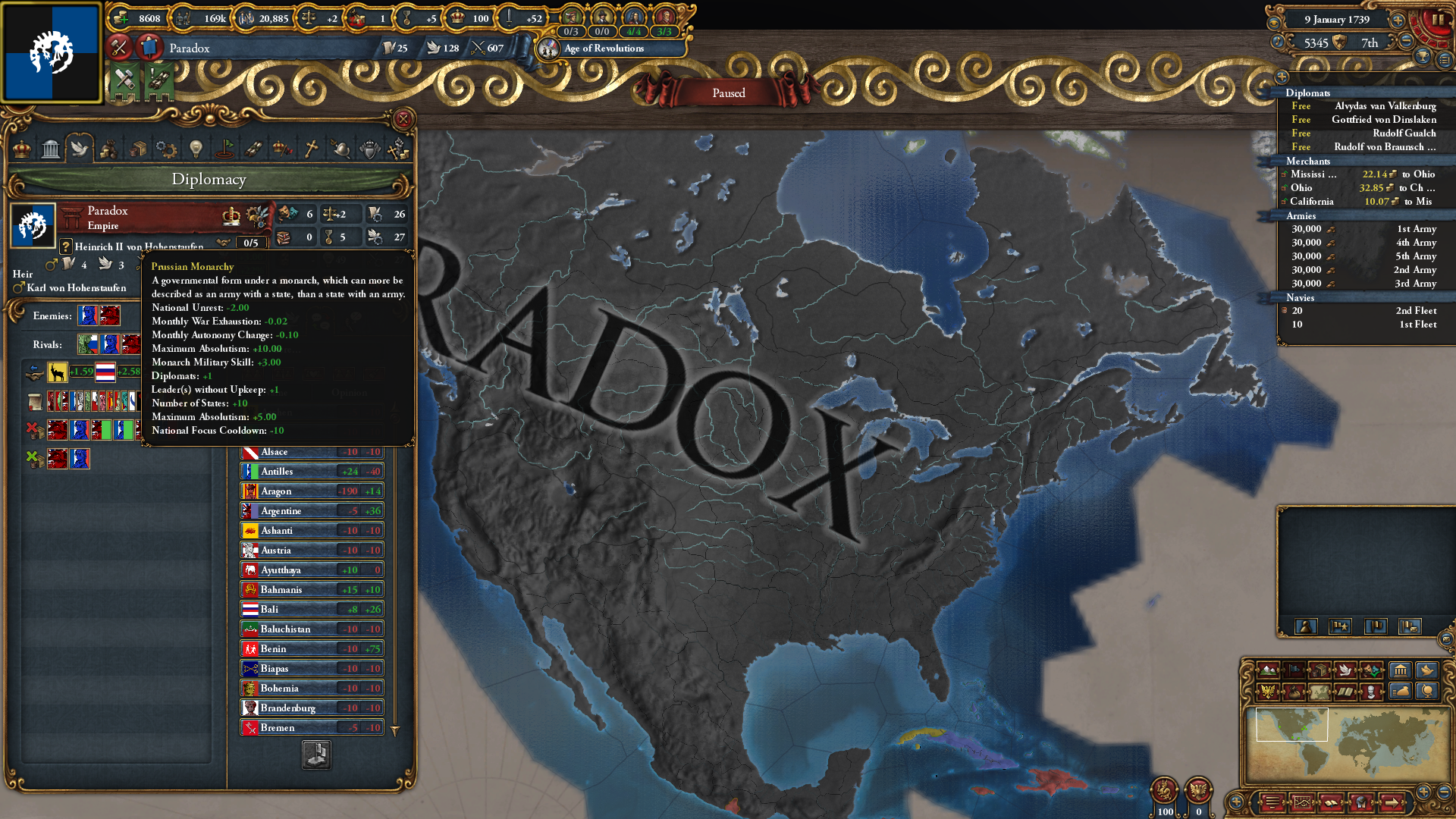 A modest game as the Republic of the Commonwealth. Mostly playing with trade and economy stuff. 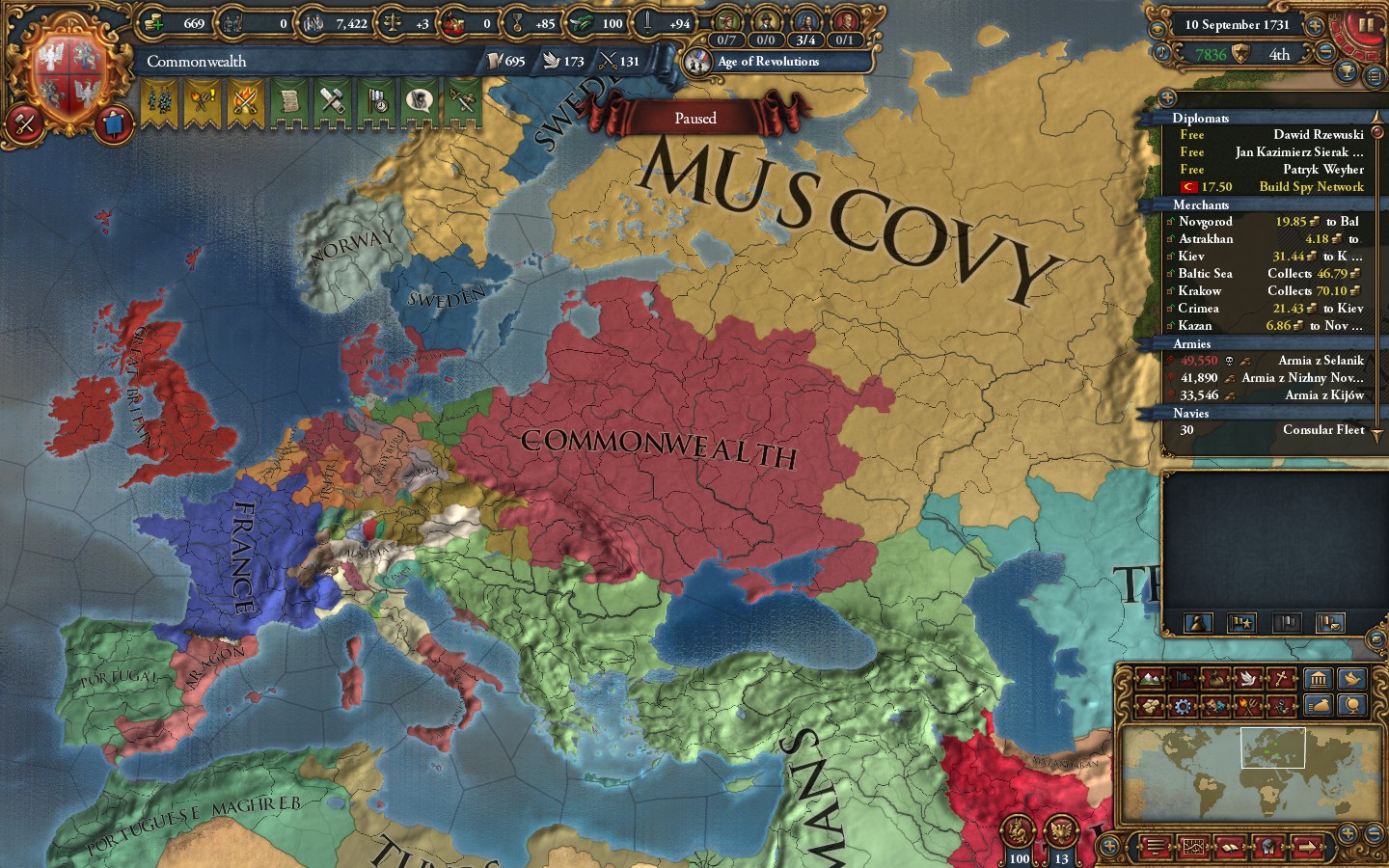 Only within the last few decades I have been able to take chunks outta the Ottomans. League War ended in total Protestant victory, Austria converted after the war but emperorship ended up in Bohemia's hands. Strangely due to the success of the Reformation they ended up passing a number of reforms after the war. 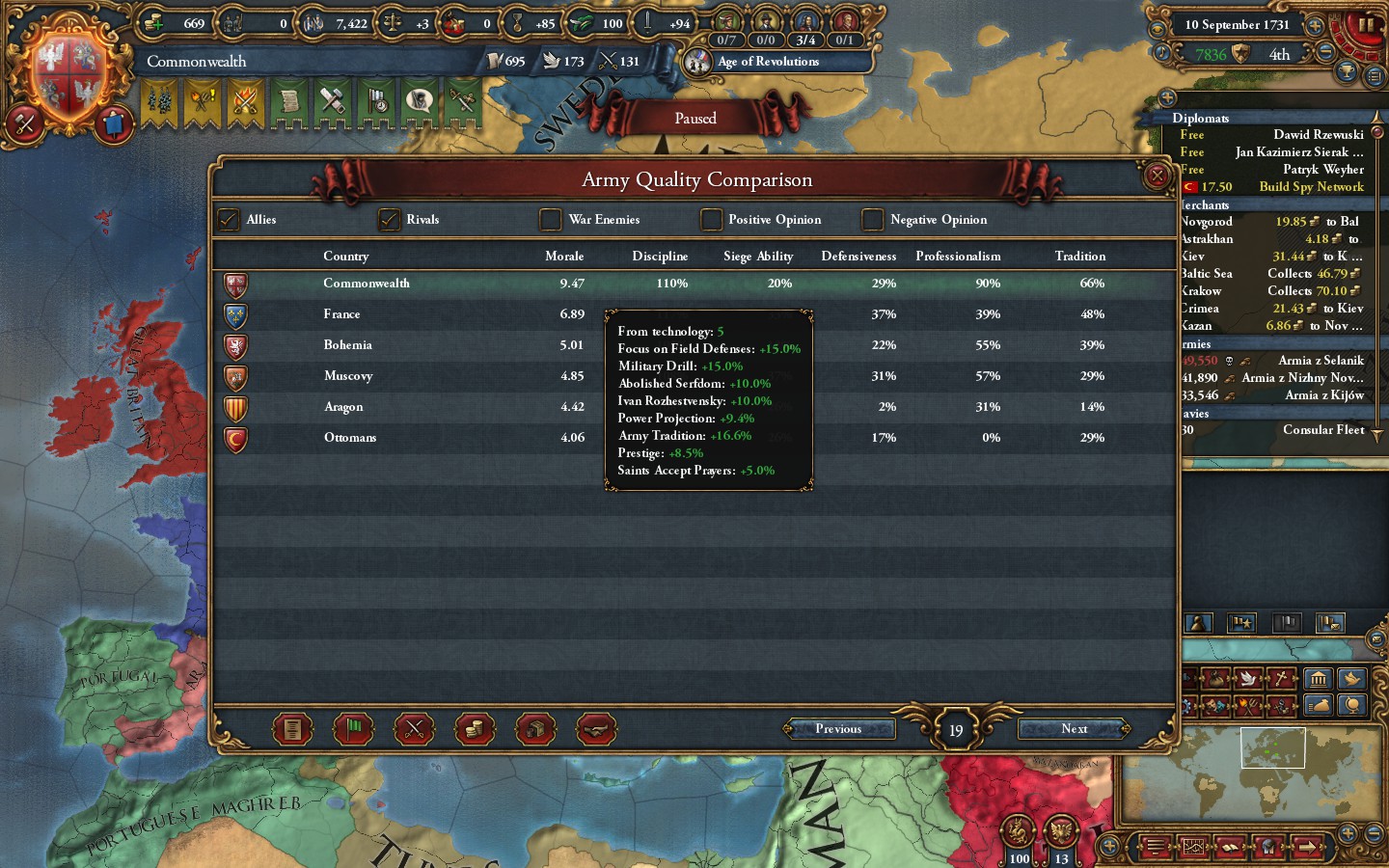 My Elán is supreme! In terms of warfare no nation can stand before me at this point, sure the Ottomans got more development and such. However they rely almost entirely upon mercenaries. Having around 150k mercenaries during peacetime and 300k at war. Sure they got twice the numbers, but whats that worth when their troops are paper. The Ottomans also never bothered to upgrade any of their forts, like any of the them at all. Even Constantinople is still only a 3 level fort. I suspect this is due to their reliance on mecenaries draining their economy. Kinda feel like relying excessively upon mercenaries should trigger some disaster where mercenary companies take over regions and carve out their own princedoms, akin to the Cossack Independence disaster. 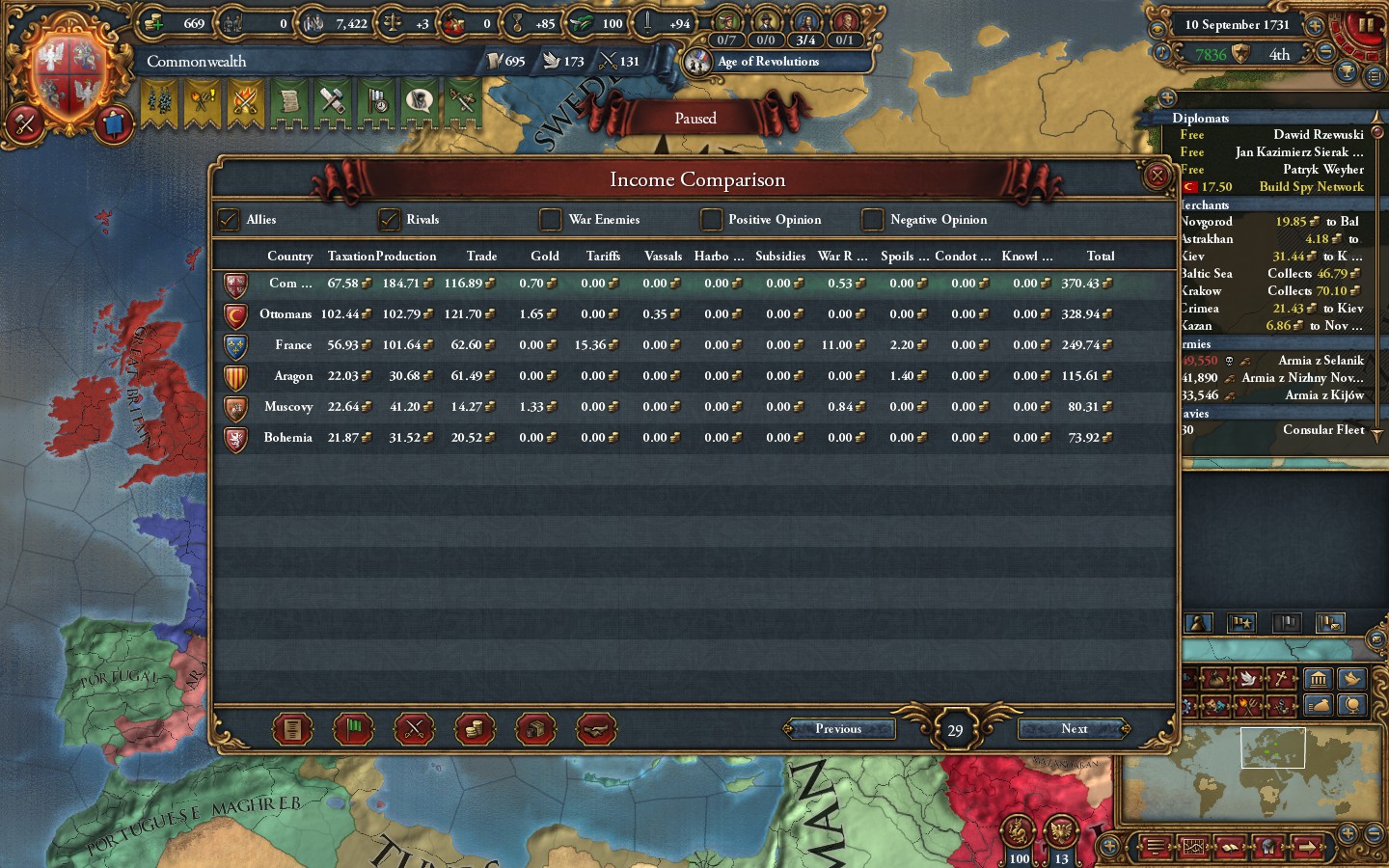 Doing pretty well for myself. The area around the Commonwealth as a good amount of Coal for industrialization. Part of my strategy for dealing with the Ottomans centered around (hopefully) denying them access to Coal. Launching invasions into Crimea and Hungary to stop them from improving their economy. Only recently have I had success with this, taking the state of Azov and a chunk of Hungary. Dunno if I wanna continue this game, late game is laggy.

Other interesting things include:
Early partition of Castile, resulting in Great Britian and Portugal carving up the new world between. Great Britain also stayed Catholic. Portugal got most of North America, Great Britain took Central and South America (minus Brazil ofc). Castile is still exiled on the Canaries. Forever alone.
Strong Timurids.
Muscovy being my personal punching bag. Whenever I needed money for upgrading my forts I declared a war against them and stole all their money and forced war reparations.
Independent and strong La Plata.
After the Ottomans took most of Egypt, the Mamluks expanded south as if to run away from them. Wasn't until around 1670-ish the Mamluks was finally annexed.
Decent Netherlands, along with Dutch Kongo.
Scottish Greenland.
Gelren West Africa.
Iceland formed, though they are an OPM owning only half of Iceland.
Ming Colonizing Siberia.
U

Finally got One Faith as Karabakh -> Armenia: Nice how the map color is almost the same. Had to go some 20 years just waiting for the last religious zeal modifier to end, but I guess at least I got Bright Spark for it (easy to be the first to a tech when only CNs are left). 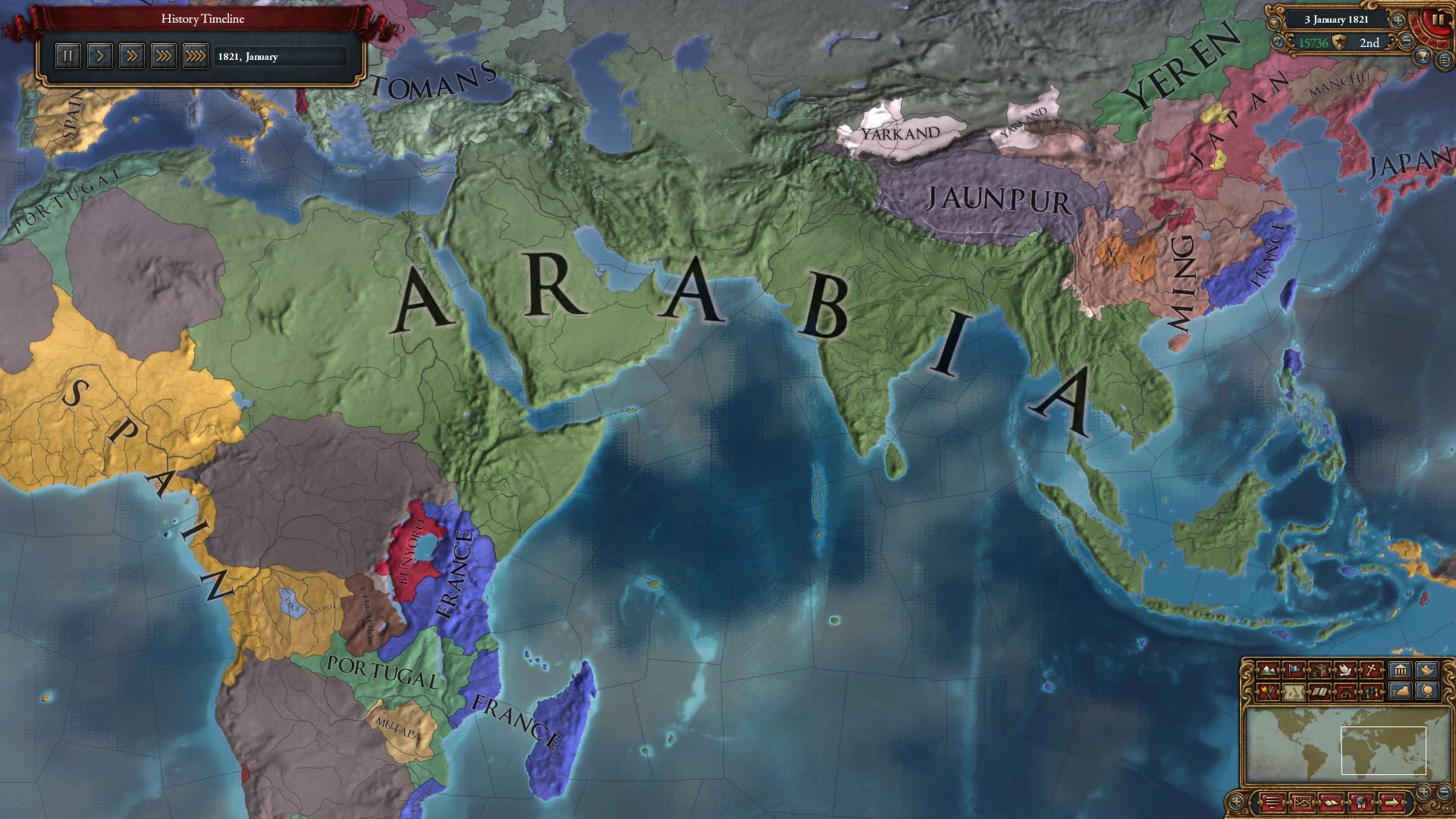 Apparently tribal allegiance gained from battles scales to... something? My guess is either development or max forcelimit, but the UI doesn't say. Anyway, once I hit about 1000 dev I stopped being able to generate more than about 1 point of tribal allegiance per large battle, and it disappeared at 3 per year, so I'll have to do another game later for Sworn Fealty.

Some interesting things about this game: first, France is HRE emperor and has both Spain and Portugal in PUs (hence my western border not extending to all of Africa); second, Japan invaded Ming and took the Mandate of Heaven by itself (before I swooped in and took SE Asia). There's also a large Prussia, but that's not all that unusual these days.
Toggle signature
Scholarly Theologian, Hedonist, Kind, Patient, Slothful, Content.
Protectionism | Interventionism | Secular | Full Citizenship | Pacifist
A

Did you have to form Arabia after getting "Jihad"?
T

afecdsvsrvd said:
Did you have to form Arabia after getting "Jihad"?
Click to expand...

It's not like Ryukyu, you can tag switch and still get it.
Toggle signature
ROTW Bros: Unreformed all game | Video: Great Khan Achievement with Mongolia.

you don't have to be Najd to get Jihad ... only start as Najd

afecdsvsrvd said:
Did you have to form Arabia after getting "Jihad"?
Click to expand...

Apparently not, but I probably wouldn't have anyway. For most of the run I figured I could just switch to Arabia at the end, and didn't realize my mistake until it was too late. Forming Arabia doesn't give you any new ideas or missions or the like, so I didn't really think it was worth it. And given how many achievements require you not to tag-switch, I tend to err on the side of caution and avoid switching unless necessary. Besides, by the time I was ready to form Arabia I already had all of the provinces that the decision would've given me claims on, because the last thing I needed (Haleb) I didn't get until a war against the Ottomans in ~1690.
Toggle signature
Scholarly Theologian, Hedonist, Kind, Patient, Slothful, Content.
Protectionism | Interventionism | Secular | Full Citizenship | Pacifist
S 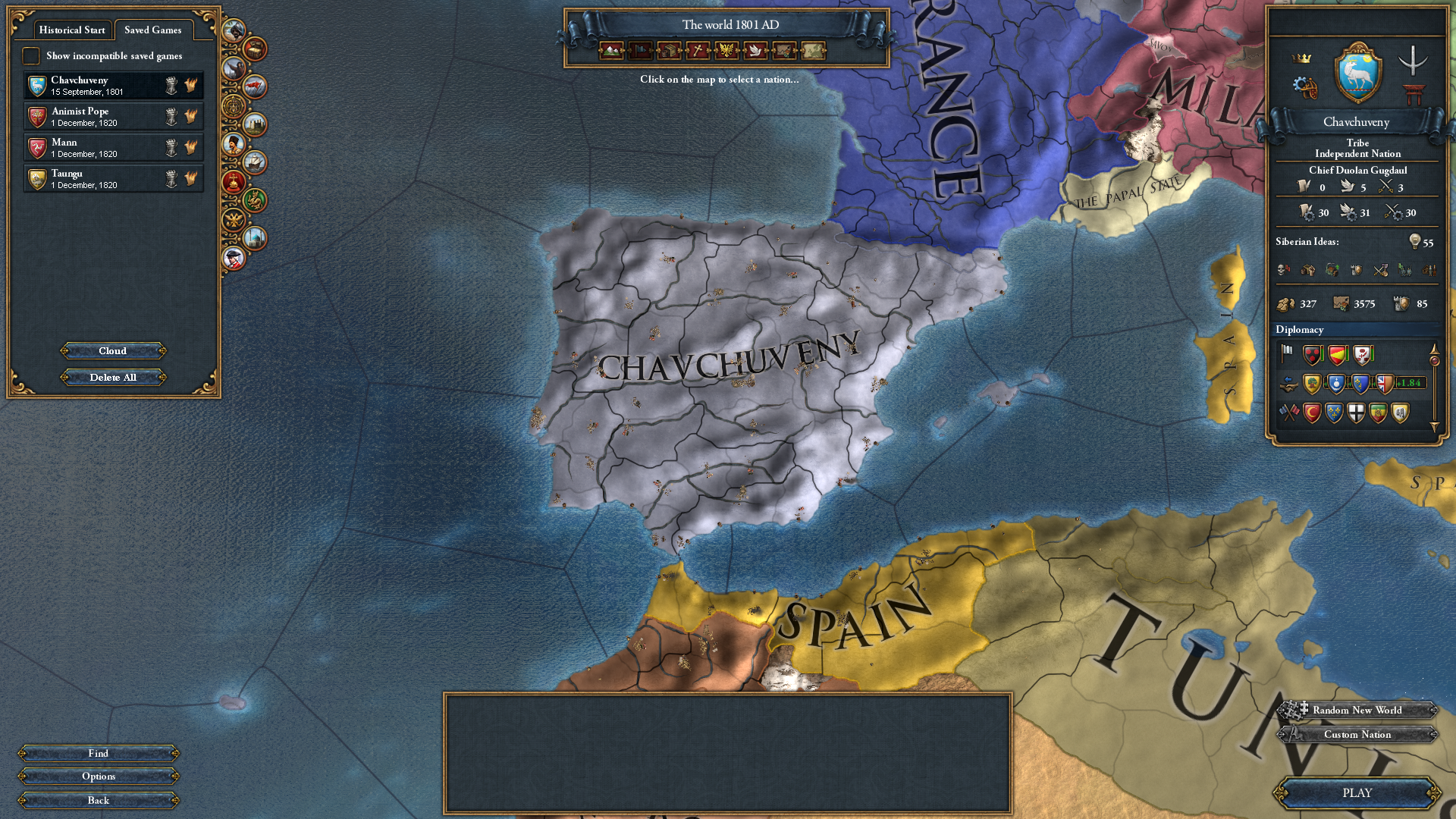 Decided to mash my 3 favourite empires (Seleucid, Roman & Byzantine) into 1. Punjab and Gazimukh are my marches, Russia and Sweden are my allies, all 4 are orthodox. Only thing I'll probably do before 1821 is force Brandenburg orthodox, make them give Sweden's cores back, take a few more colonies from Spain to tidy up north america, and expunge Manzikert from history by replacing all Turkish culture with Greek. 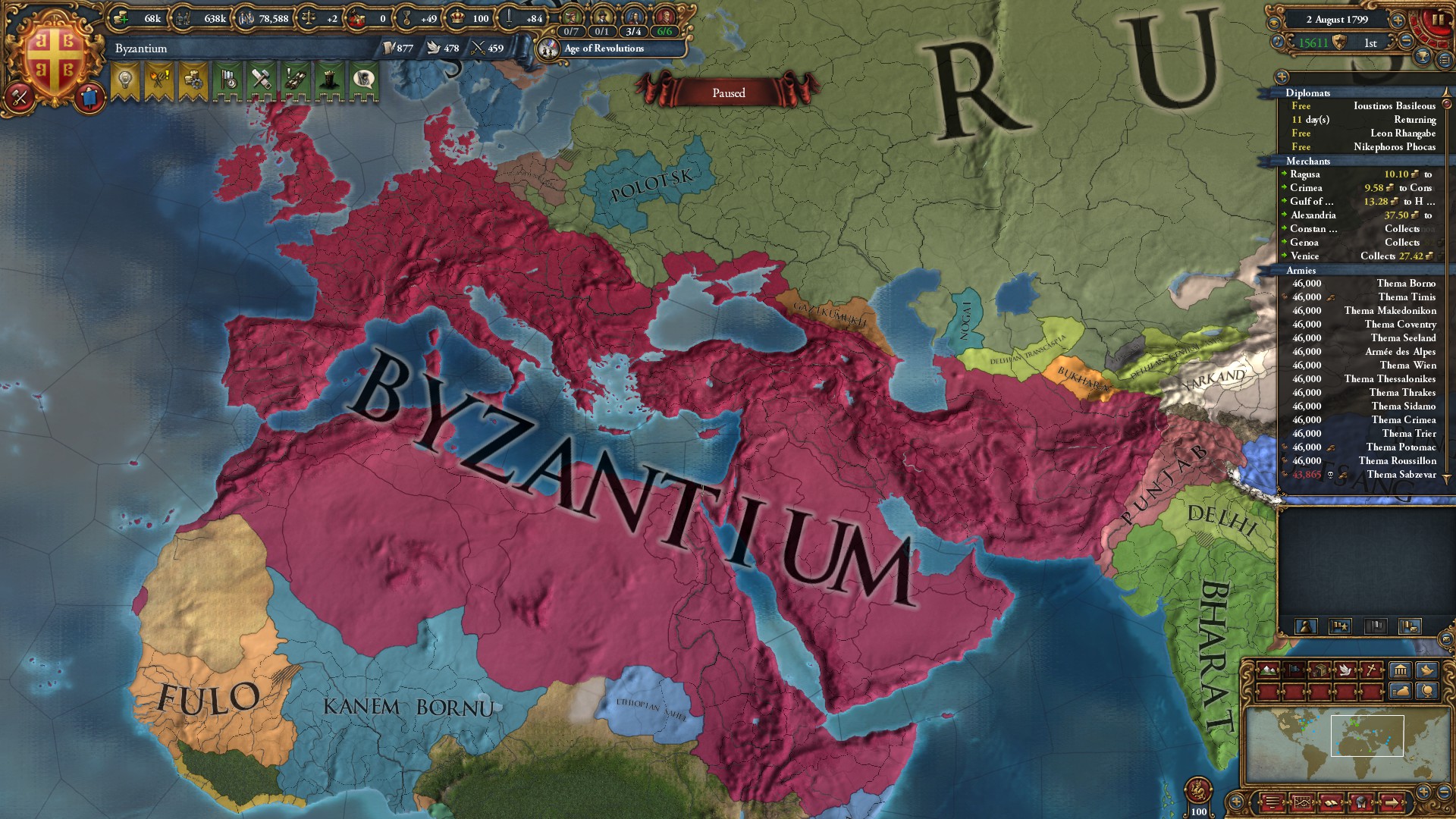 Ottos vs Albania and Venice
Then I attack with Hungary and Byzantium and I see this army there.. 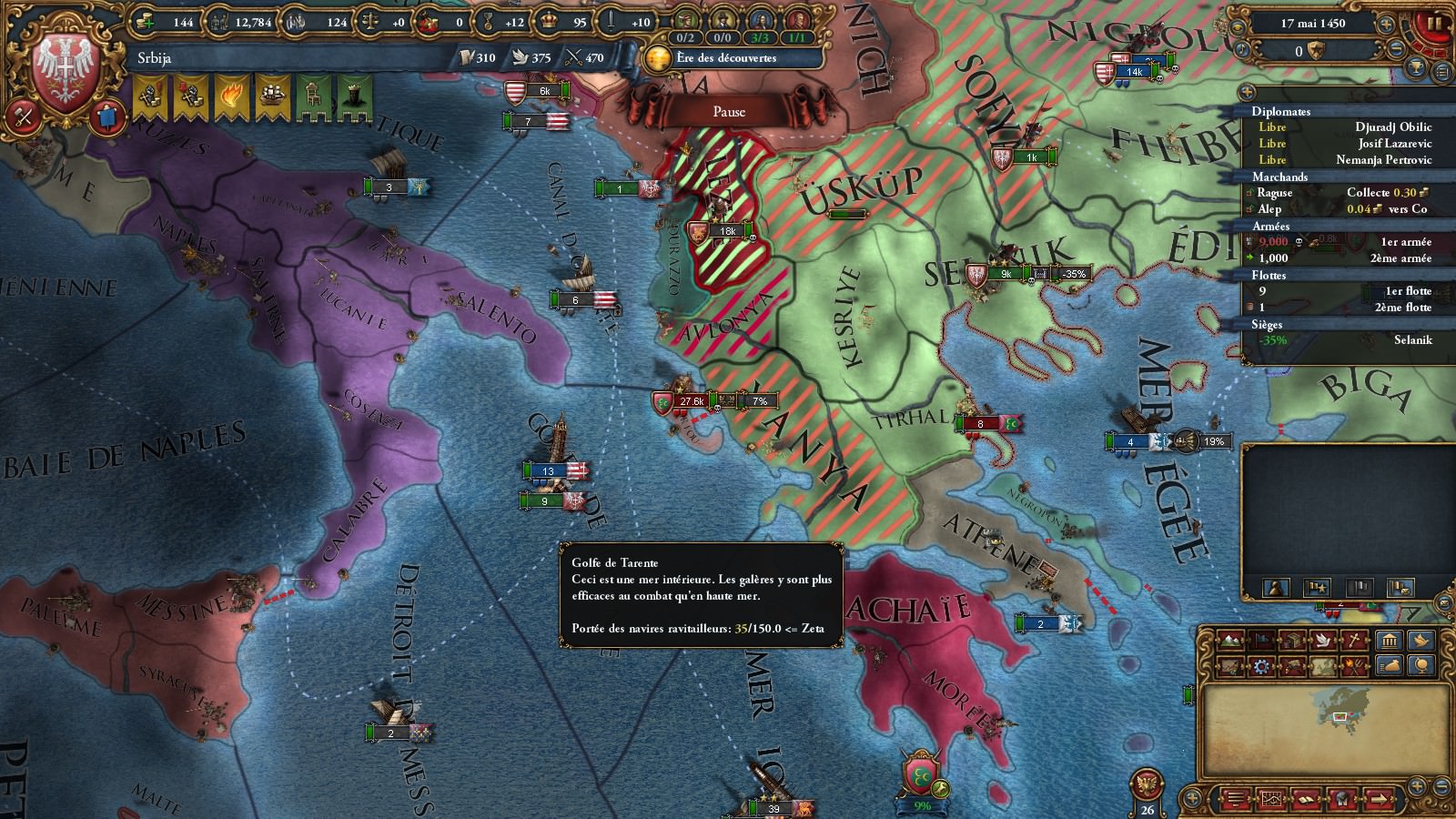 Did I do it correctly ?


Edit : Okay they white peaced Albania but their exiled army is still blocked

Edit 2 : They disbanded their army but we still manage to win. When they don't take any provinces at the beginning, they're not that strong. Now I just hope that Mamluks will attack them soon. 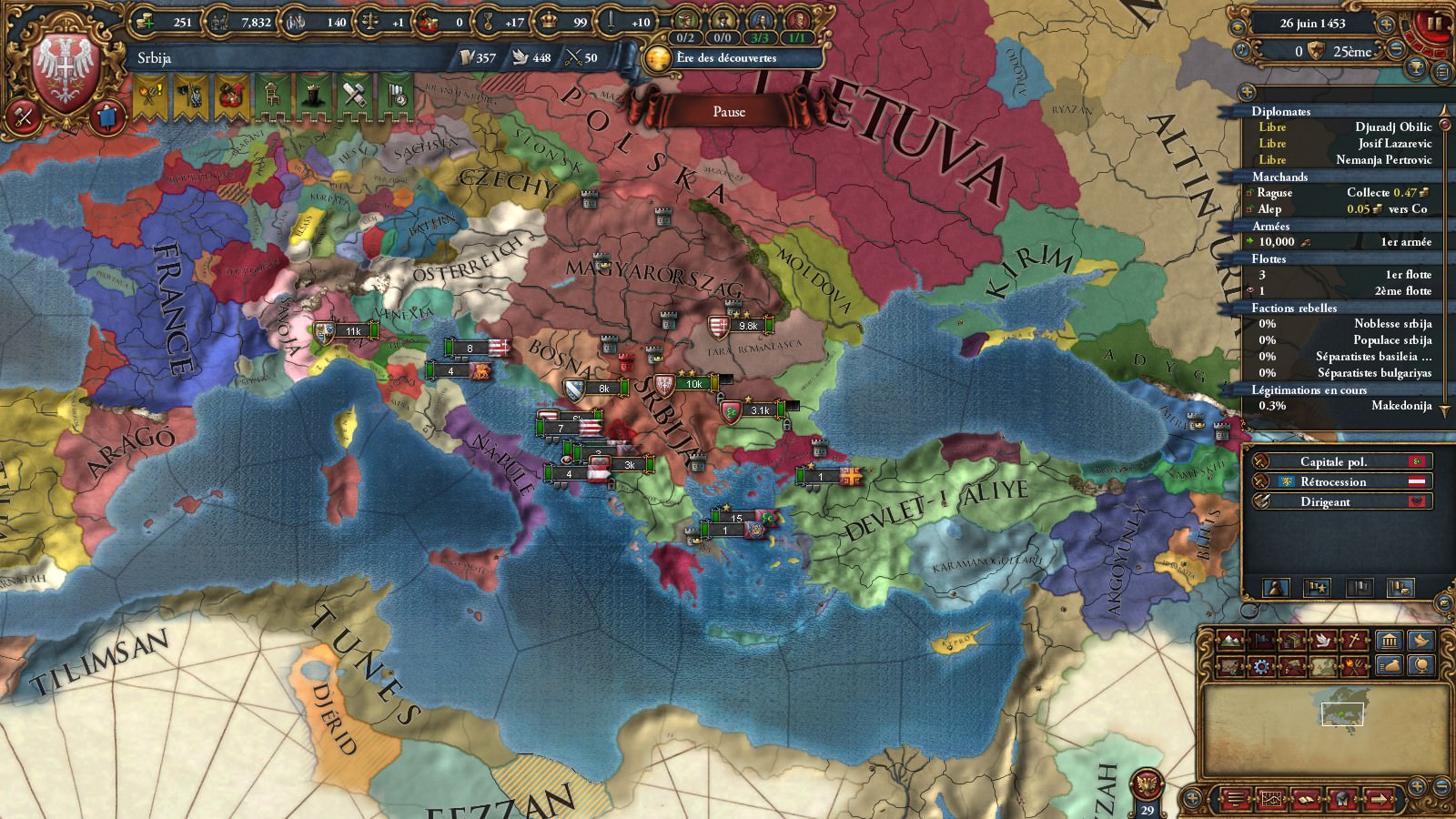 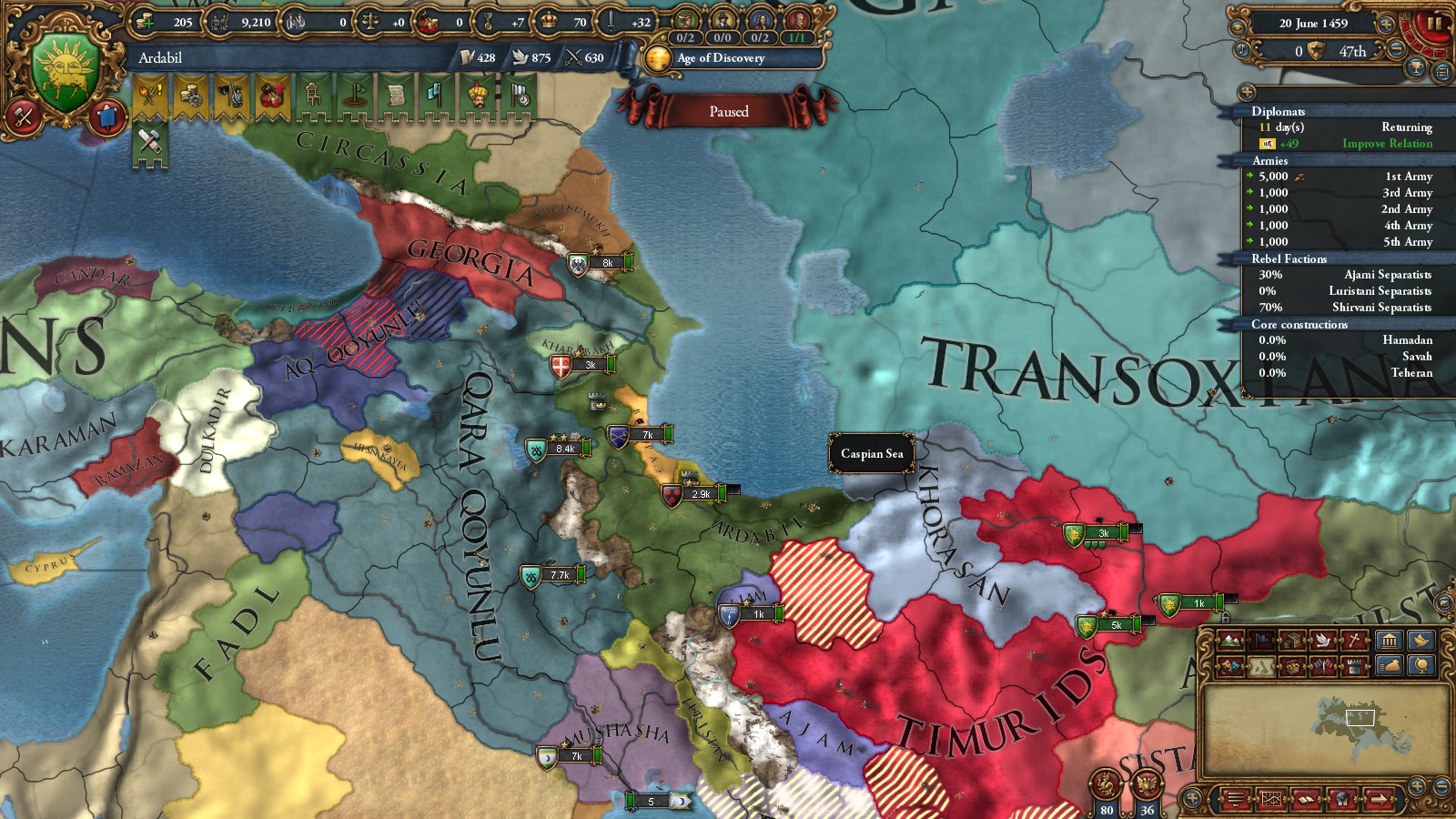 Started out by ganking Ajum for my two cores, while Timurid (+ swarm) attacked them, dancing around their vastly superior troops (not to mention their allies) until i had +10% warscore and peaced out for both provinces (you don't actually have to control forts if you're reconquering cores). Then I allied Qara and patitioned Shivan, and sat tight for a few years till my truce with Ajum was up, and ganked them (again), this time while Qara attacked them, for Soltanieh and Qazvin, peaceing out as soon as i could for those two ... then I turned around on Qara's Ally Mazandaran (Qara was -2 reasons to defend them since Ajum snug a stack onto Qaras capital), and finally I declared war on an exhausted Timurids (Afganistan/Khorasan/Transoxiana just gained independence and Qara decided to give them a lot of Ajum land) while Timmies were losing against Hormuz

Belthien said:
Decided to mash my 3 favourite empires (Seleucid, Roman & Byzantine) into 1. Punjab and Gazimukh are my marches, Russia and Sweden are my allies, all 4 are orthodox. Only thing I'll probably do before 1821 is force Brandenburg orthodox, make them give Sweden's cores back, take a few more colonies from Spain to tidy up north america, and expunge Manzikert from history by replacing all Turkish culture with Greek.
View attachment 359437
Click to expand...

I have ignored a few users here for various reasons. don't be confused if I don't respond to your replies to my posts.
B

Wixelt said:
Was Sahel dominated by Fulo and KB your doing?
Click to expand...

Nope, touched nothing down there, that was mostly their doing, though maybe my weakening of the Europeans who might have preyed on them helped. Only wars I had that involved that area was 2 where KB was an ally of my enemy, white peaced them both times. 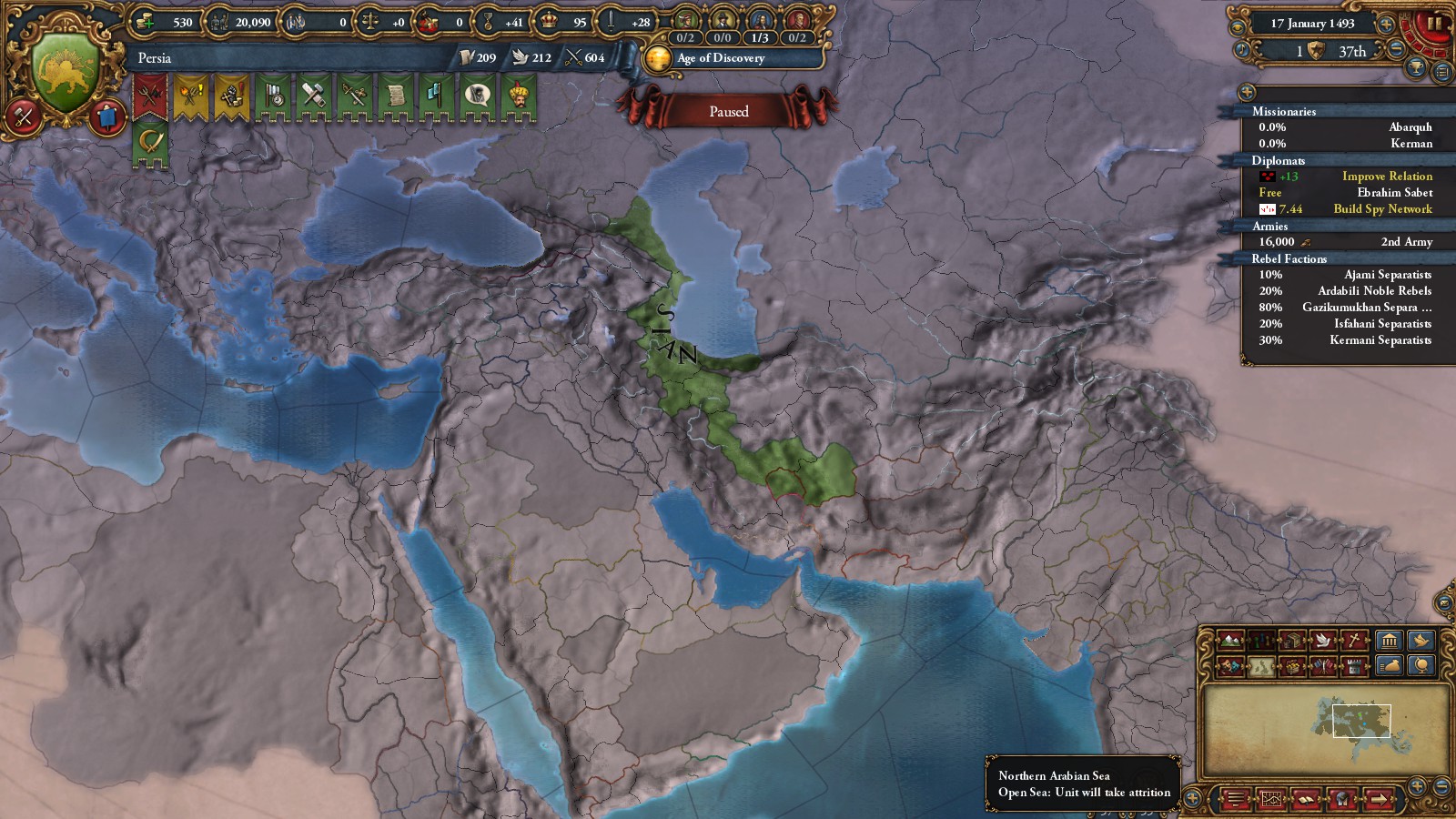 Just wanted a relaxed game as Novgorod to get the 'Frozen Assets' and 'Relentless Push East' achievements... Didn't quite reach the one million ducats

Empire of Mann on VH: Most notably, I got a PU on France around 1600, pretty smooth sailing from there. HRE got peace of Wesphalia, so I became emperor as Anglican and managed to force it on most electors too. Last few years was just waiting on my colonists to get the last empty provinces needed.
S

Most notably, I got a PU on France around 1600, pretty smooth sailing from there. HRE got peace of Wesphalia, so I became emperor as Anglican and managed to force it on most electors too. Last few years was just waiting on my colonists to get the last empty provinces needed.
Click to expand...