Jump to latest Follow Reply
Menu
Install the app
You are using an out of date browser. It may not display this or other websites correctly.
You should upgrade or use an alternative browser.
Hearts of Iron IV 40899 Bug Reports 11945 After Action Reports (AAR)
Previous dev diary Next dev diary
Show only dev responses 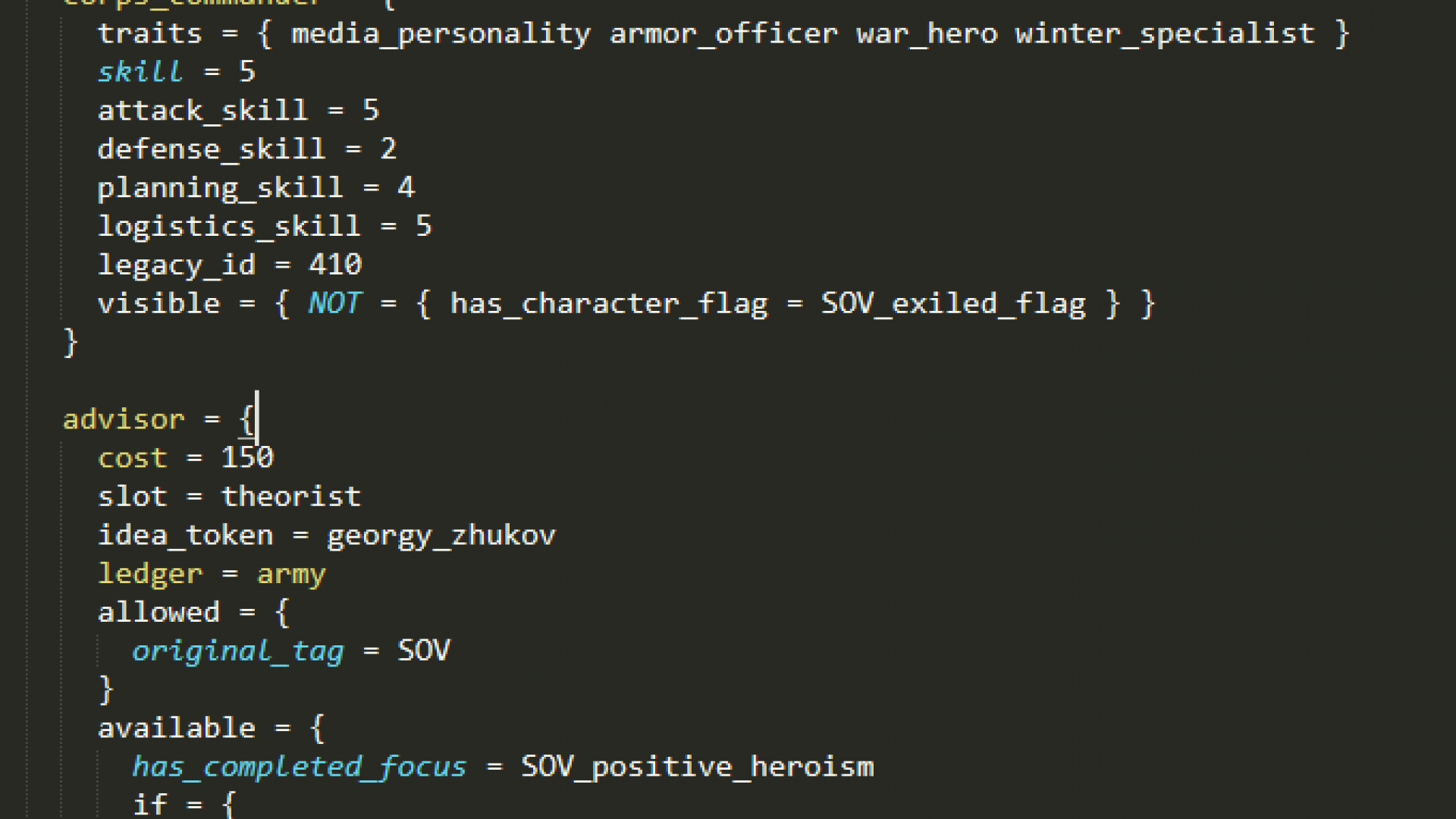 Hello, and welcome back to another Dev Diary for No Step back and 1.11 Barbarossa. Today we will be pulling back the veil a bit and show you how modders can affect and use the new features coming in 1.11.

For those of you who do not get unreasonably excited by hearing about new script commands and changes to databases, the long and short of it is this: We made some fundamental changes to the way the game handles some things, which will probably require your favorite mods to spend some time updating. On the flip side, those changes also allow for some exciting possibilities down the line. If you came here hoping for a release date, we must ask you for just a little more patience. We promise the announcement is very close - but not today.

Probably the biggest change is in how we handle people on the backend (or ponies, for that matter - we do not discriminate). In the current live version, the game has no real concept of a person as a distinct thing. It only knows about country leaders, military leaders, political and military advisors, and operatives. Cases where a country leader could also be a general had to be handled manually, leading to lots of exciting bugs when the country leader was removed but the general was forgotten about and other such cases.

We have overhauled that side of the game from the ground up with the introduction of characters. This should dramatically reduce the amount of potential zombie generals shambling around, which I am sure the non-zombie population will greatly appreciate.

Characters are defined in the common/character folder, and their definitions look like this: 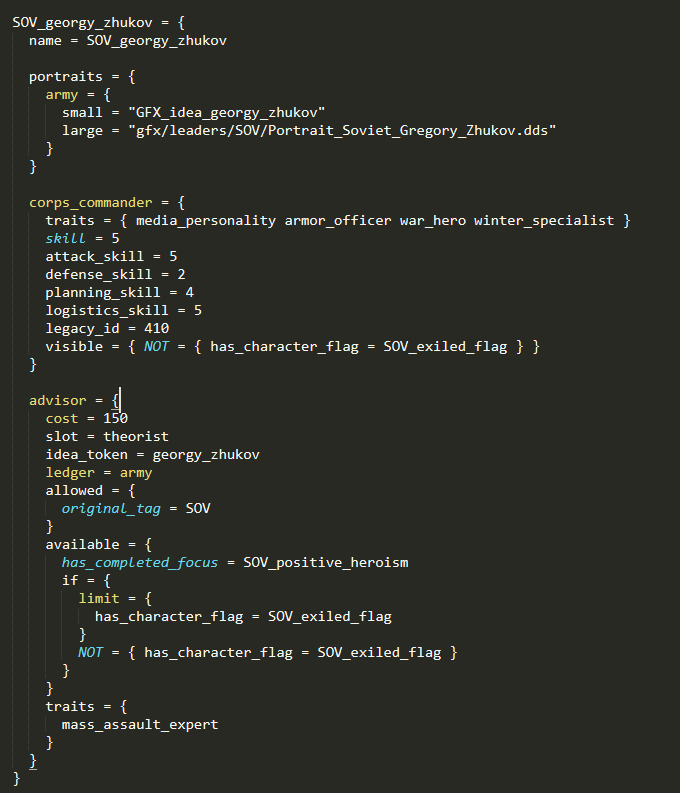 Every character is defined as a container for different roles they can fulfill, like General (corps_commander), Advisor, country leader etc. Due to technical concerns, Operatives remain their own thing. On the character level itself, things like name and gender are handled. This also means that character names can now be localised and you can refer to a character by ID instead of by name (this helps a lot with character names that have non-english characters in them - turns out this broke some triggers and effects).

Or we could also add the role later on, via focus, event, decision... like we do here with Beriya:

That means there is a lot less confusion and duplication of effort necessary when putting a character into a new role, since stuff like portraits, name etc. are already handled. A broken portrait only needs to be fixed in one place instead of five etc.

Once defined, characters are recruited in the country history file in order to be added to the game. As you can see in the first screenshot, you can use visible triggers for unit leaders to ensure they are not shown if you don’t want them to be.

This is a clear departure from the practice in the live version of the game, where you would create a new country leader in that effect. The old script with create_country_leader and other such effects should still be working, but obviously you don’t get any of the advantages of the unified character system.

So let’s talk about some more things you can do with it!

You can set and check character flags for nefarious purposes:

You can change the traits of advisors without having to make a whole new advisor: 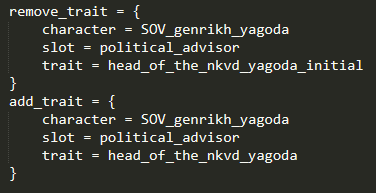 You can check if a character is a certain type of character:

You can save the character as a variable to refer to them later, such as spamming debug messages in the console!

Next, let’s talk a bit about how the tank designer works on the backend. It shares a lot of concepts with the ship designer, such as modules and module slots. It does, however, work a little differently in some other, important aspects.

While the system pretends that there are only a handful of chassis (light, medium, heavy, super-heavy, amphibious, modern), this is not technically true. Instead, the system maintains a whole host of other, dynamically created chassis. This allows us to make sure that tank designs with the tank destroyer role actually go into tank destroyer battalions etc.

However, these dynamic chassis are still generated from the base chassis, so any changes to them will carry over.

The roles are enabled and disabled on individual modules:

For the unlock of new module categories, you can then use this on a module to unlock that category:

Railways function a little differently from other buildings. While they are technically province buildings like forts, they are in reality closer to a building that connects two provinces. A railway line is effectively a series of two-province connections, and the lowest one in the chain determines the level of the railroad connection between two supply hubs.

To make it easier to change and maintain the historical railway setup, we have added an option to draw railways into the nudger tool, which you can access by using the nudge command in the console.

The railway setup is in the supply menu in the nudger, and you can easily add new railway lines to the existing setup in this way. It took me about a week and a half to do the entire 1936 setup, including tracking down reference maps (with a lot of help from some of our testers).

If you want to add railways through script, you have the build_railway effect. It gives you a lot of options, with the most basic one being to lay out the path one province at a time:

This is obviously a little cumbersome for longer railways, especially if you don’t really care about the exact path. For that, you have the option to define a start and an end province:

The game will then automatically generate a path from one end to the other using advanced neural network-based self-learning algorithms that use blockchain (read: I have no idea how it works but this sounds impressive).

If finding the province is too much work, or if you want to be somewhat dynamic, you can even use start and end states (also note that you can specify what level of connection should be built):

Note that you can’t mix these, so you can’t define a starting province and a target state for example. 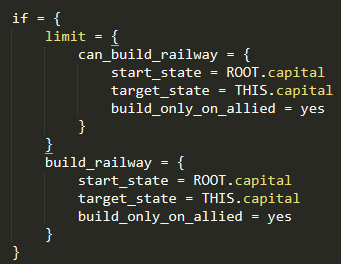 The first checks if a railway can be built between two locations, while the other checks if one such connection already exists.

In addition to the things described above, we have added a number of useful things that some of you might find useful:

That’s all for today, I hope you enjoyed these little insights and we are all excited about what crazy things you will do with the new tools at your disposal.
Reactions:

This comment is reserved for the community to remind you that it's time to launch this.
Reactions:
N

Road to 57 confirmed then!
Reactions:

Will there be a new console command to promote charackters directly for testing?
Reactions:

Nice! This is great for modders.
Reactions:

noname warrior said:
Road to 57 confirmed then!
Click to expand...

*Railroad
Toggle signature
~Proud and Acknowledged member of the Paradox Fanboi Squad~
*-Fanatical Supporter of the Anti-Entitled Gamer Society-*​
"Guys, what if I told you that video games can be enjoyable without a Serbian attention to map detail?" - Comrade Chaos
"I'd like to apologise to anyone I have not yet offended. Please be patient. I will get to you shortly." - Kadanz

Can leader portraits be updated via console?
Reactions:

Can a character have different portraits for when they are a general vs an advisor vs a leader?

Also can you remove characters from a role while keeping them around in others?
Reactions:

Archangel85 said:
On the flip side, those changes also allow for some exciting possibilities down the line. If you came here hoping for a release date, we must ask you for just a little more patience. We promise the announcement is very close - but not today.
Click to expand...

This is great news. Looking forward to it.
Toggle signature
In dealing with trolls, I have found reason to be useless, and ignore lists to be indispensable.​
Reactions:

While this is really my thing, I really appreciate the communication about the release date situation. Thanks for keeping us informed about when its coming.

For those who missed it:

If you came here hoping for a release date, we must ask you for just a little more patience. We promise the announcement is very close - but not today.
Click to expand...

Love the addition of characters. Will certainly make it easier for those mods with an enormous amount of generals and country leaders to manage them all. Mechanics like Millennium Dawn's party leader election/retirement system, while certainly a creative and working solution, for the modern era where leaders change all the time, could certainly benefit from these changes because it has had some interesting bugs over the years. Like when Clinton would live forever and never stop being president of the USA. Also definitely makes it easier to add/remove new characters over time.
Reactions:

Can Building_cost_factor be tied to a single building type at a time? because if it's not possible then i don't see that much difference from a construction speed modifier
Reactions:

great news! the Characters are a great addition, but mainly the tool to define where the train lines are (i was very preoccupied, already thinking that it would have train lines in the middle of the amazon and be difficult to change)

Wow, really like most of this! It's great to see how the railway works, been waiting to see if it'd be too hard to adapt to current infrastructure focuses/decisions I have

What I'm really, really, interested in however is the characters thing. Just a handful of questions regarding them:
- As leaders and generals are currently stored in the country's history file, I take it they've been moved out into this new 'characters' folder?
- Next point requires this example:
View attachment 766440
Would this work with how events currently handle leader swaps then? So when Baldwin resigns for example, does that now "promote_character" Chamberlain? If that is the case, I imagine elections will be much, much easier to implement due to being able to just make all the leaders you need, then promote when they're elected.

And finally, how much conflict does this have with the live version? If there's one think I don't like about modding, it's the scouring through files to see what's broken after a patch, so just wondering if I'm going to be spending my first week after the patch un-breaking everything
Reactions:

1) Are country specific effects in terrains now possible ?
2) Can we mod trucks for supply hubs so that they use fuel ?
3) Nothing new for AI modding ?
Reactions:

Characters will be really good to countries with a general as leader
Reactions: