Good day all! Today the team is all back and hard at work following an exhausting yet wonderful PDXCon. Thanks to everyone out there who contributed to its success by your presence. With our upcoming expansion now announced we return to talk in detail about the features and changes coming in Dharma.

Today we turn our attention to the much-teased Estates. To set the context for our changes I'm first going to outline the logic that lead our infinite wisdom to make these changes. Estates were introduced as a feature in The Cossacks DLC and while they were intended to be an interesting mechanic aimed to deepening the internal politics of your realm, they fell short in a number of ways. There were very few types of Estates, leading to a lack of immersion when you were dealing with the same groups when playing as either France or Bengal. Additionally, they ended up posing as a nuisance in many areas of the game. Their land demands would often feel a burden and a chore for a player, especially after finishing up a hard-won war. We also found that their disasters ticking up at 80% felt rather counter-intuitive. 79% was absolutely safe but 81% is danger zone? Additionally, with the feature being a paid part of The Cossacks, we were in a tricky situation with what to do with it.

As of the 1.26 Update, Estates shall be a free feature. This means that regardless if you own every expansion and immersion pack or if you have the base game and nothing more, you will have your estates in your nation, free to interact with, assign land to, reap rewards from and/or gain disfavour with and face internal strife. Coupled with this are some quality of life changes for Estates: No longer shall they demand a minimum amount of territory from your nation, leaving you free to choose if you want to indulge your various interest groups for their powerful support or shun them and forego the risks of them seizing power for themselves. Additionally, the aforementioned risk of disaster striking from overly powerful estates shall tick up when their influence is at 100% rather than the previous 80%

We are also free to further work upon the Estates system, which leads me nicely to the New Estates for India.

Indian nations will now have access to brand new Estates for the different Castes in the subcontinent. The following are available to nations in the subcontinent and largely replace the existing Estate types (merchant guilds, Clergy, Nobility) and are exclusive for owners of Dharma. 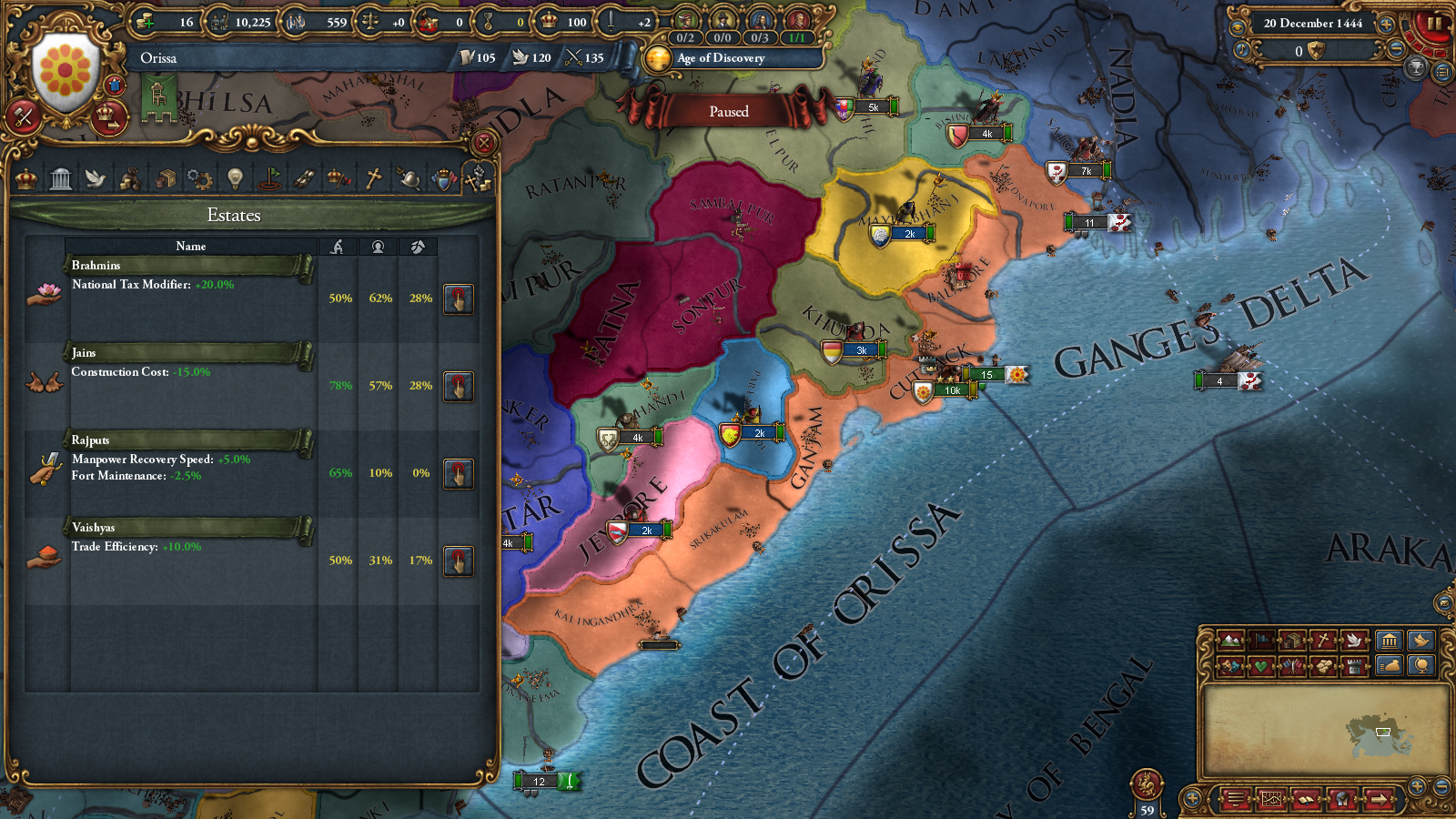 Marathas
While originally a term applied to all Marathi-speaking peoples, the Marathas have defined themselves as a caste of warriors. The Marathas are found both in their native home of Maharashtra and beyond, seeking opportunities for distinguished military service.

Available to all nations in the Indian Tech Group of culture group Dravidian, Western Aryan but not Rajput or Malvi culture.
Depending on influence and loyalty, locally, Marathas impact on religious conversion chance while globally they impact on cavalry combat ability and army tradition

Interactions:
Brahmins
The Brahmins are the priestly caste of Hinduism. They are the keepers of ceremonies and scriptures, as few non-Brahmins are educated in Sanskrit literature. They command great respect from Hindus and non-Hindus alike, and sometimes take roles in government.

Available to all Hindu and Muslim nations in the Indian Tech Group.
Depending on influence and loyalty, locally Brahmins affect unrest and institution spread, while globally they affect stability cost, devotion and tax.

Vaishyas
In Vedic scripture, the Vaishya caste are laborers and agriculturalists of relatively low status. They have since branched out into more lucrative professions; merchants, craftsmen, men of money, they are the lifeblood of Indian commerce.

Available to all nations in the Indian Tech Group Hindu nations.
Depending on influence and loyalty, locally Vaishyas impact on development cost and trade value, while globally they affect production efficiency and advisor cost


Rajput
The Rajputs are an ancient caste of honorable warriors and proud nobles. While the rugged land of Rajasthan is the heart of their power, Rajput nobility can be found throughout northern India and many great Rajas claim Rajput descent.

Available to all nations in the Indian Tech Group of culture group Hindustani, Eastern Aryan, Central Indian and Rajasthani or Malvi culture.
Depending on influence and loyalty, locally Rajputs affect manpower and defensiveness while globally they impact on manpower regain and fort maintenance costs.

Jain Community
Jainism is no longer a dominant or politically favored faith in India, but the Jains are far from irrelevant. They have found a niche in moneylending and bureaucracy that makes them an asset to any state that offers them patronage.

Available to all nations in the Indian Tech Group of Hindu faith or replaces the Burgher Estate for Indian Muslims.
Depending on influence and loyalty, locally the Jains affect state maintenance, manpower and tax, while globally they impact on interest rates, construction costs and construction speed.

Quite the impact for the subcontinent, but where does that leave owners of The Cossacks? Cossack owners will still exclusively have access to the titular Cossack estate type, as well as the Dhimmis and Tribes. We have also decided that The Cossacks owners will, with the 1.26 Update, also get the new feature to Play as breakaway Cossack Nations. 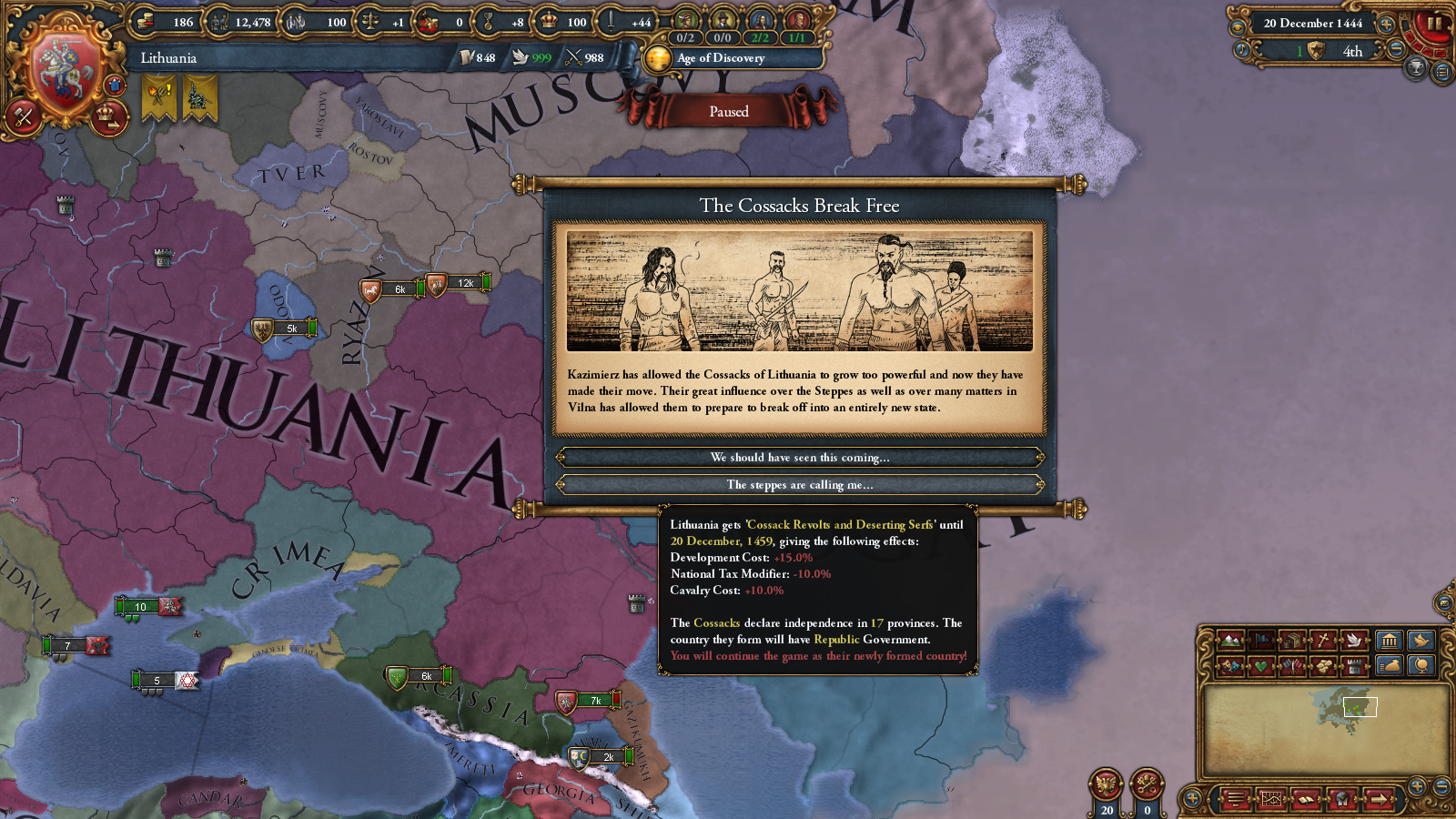 When the Cossacks disaster is triggered, you will have the option to play as said Cossack nation. You will be given the unique Power Structure reform Sich Rada granting tremendous cavalry bonuses, while having access to your own Government Interactions: 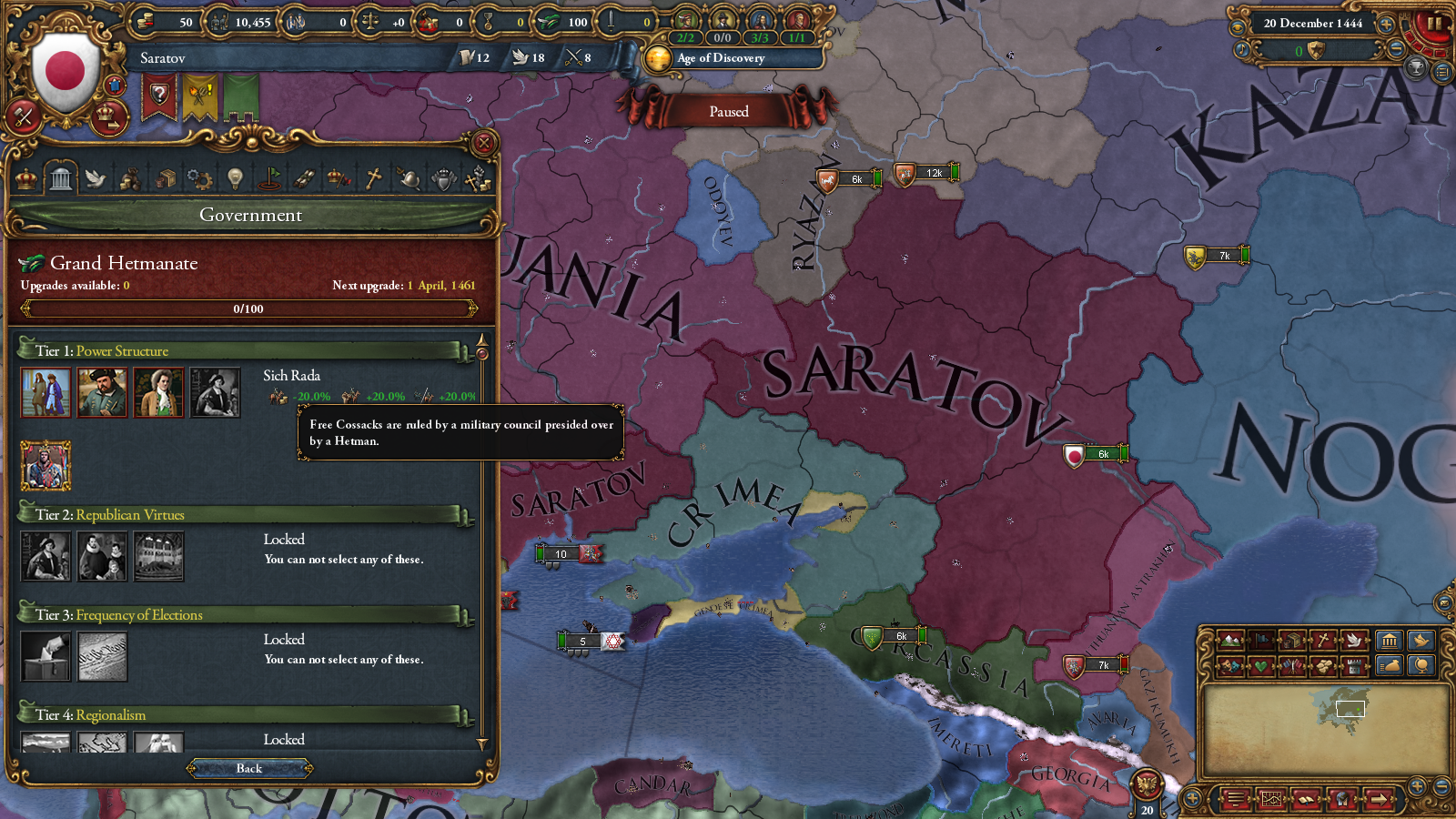 
That's quite the lot for today, hopefully it makes up for the scandalously late dev diary courtesy of the exciting yet exhausting weekend of PDXCon2018. Next week, hmm, how about we take a look at how we're furthering our content for the Mission Trees introduced in Rule Britannia? Sounds great, see you then!
Last edited by a moderator: May 22, 2018
Reactions:

DDRJake said:
Jain Community
Jainism is no longer a dominant or politically favored faith in India, but the Jains are far from irrelevant. They have found a niche in moneylending and bureaucracy that makes them an asset to any state that offers them patronage.

Available to all nations in the Indian Tech Group of Hindu faith
Click to expand...

Will the expansion add mechanics to Sikhism?

I am glad you took community insight on board when it comes to estates, I know a lot of people did argue that they thought it would be fine to make it a free feature in exchange for a new mechanic in the DLC. I am excited to see what new things you will do to estates in the future.

Will this DLC land before summer vacation? Or do we need to wait through the break?
Toggle signature
Tibet map overhaul: https://forum.paradoxplaza.com/forum/index.php?threads/tibet.1096518/

First step in the right direction for estate overhauls.

That’s one hefty DD. Cheers! But this is by far the best part:

DDRJake said:
The Estates System is now free to all players as of the 1.26 update
Click to expand...

I’m eager to see how this feature gets implemented in the base game and now that it’s free it can start tying into other features how you would expect them to.
Get Common Sense’s Development in the same spot and I think that can lead to massive improvements for the game and its future.
Great decision!!
Toggle signature
Ideas to Improve Golden Century
Disappointing Accomplishments in EU4
"If you don't want fantasy nations why would you suggest Belgium?"
"Glorious tent-living master race cared nothing for the cries of the filthy house-peasants" - @Fishman786

Will Cossacks get a price reduction now estates are free
J

DDRJake said:
Get Random development in a province of a culture/religion that is repressed by another nation.

Does this mean the corresponding dev of the oppresing nation is going to decrease?

DDRJake said:
As of the 1.26 Update, Estates shall be a free feature.
Click to expand...

If I understood correctly, there won't be revision of estates for countries that were tied to DLCs or Immersion Pack? Like Ottoman Government, Russian Principalities etc.
Toggle signature
Thou shalt not make a machine in the likeness of a human mind.

Any thoughts about adding additional estates for other regions? I'm thinking a Jewish estate for most of Europe. And if there will be new estates (and they're free) will this mean we get rid of the old faction system for Celestial monarchy, merchant republics, etc.
Finally, will this mean hordes don't have to give loads of their land to the tribes and their damned 50% autonomy
Changes look really good and it'll really help the estates system be the best it can be

johnleeyx said:
Does this mean the corresponding dev of the oppresing nation is going to decrease?
Click to expand...

No, the opressing nation though do get a temporary negative modifier
Toggle signature
That'd be Groogy. He's kinda like the King Joffrey of these forums, toying with us for his own sick amusement. - DominusNovus
The Groogy is an elusive and magical creature. You do not find the Groogy, the Groogy finds you. - Enlil
I thought he was just created in a lab - Viking

Yes
Toggle signature
That'd be Groogy. He's kinda like the King Joffrey of these forums, toying with us for his own sick amusement. - DominusNovus
The Groogy is an elusive and magical creature. You do not find the Groogy, the Groogy finds you. - Enlil
I thought he was just created in a lab - Viking

I own all the DLC and I fully support making any feature free if it allows you to improve it more easily. My interest is 100% focused on having a better game.