Menu
Install the app
You are using an out of date browser. It may not display this or other websites correctly.
You should upgrade or use an alternative browser.
Cities: Skylines 5548 Support & Bug Reports 6804 Suggestions & feedback 2770 Modding & Resources 1769 Official Information & Announcements 127 City Journals and Let's Plays 470 Cities: Skylines Console & Windows 10 Edition 808

Ever wanted your citizens could easily switch between transportation types? With new hub buildings, now they can! There are several types: Ferry Bus Hub for ferries and buses, Monorail Bus Hub for monorails and buses, End-of-Line station and multi-platform station for trains that also have a metro stop, and the ultimate hub which has train, monorail and metro stops. The idea behind the hubs is that placing two stops or stations close by to allow citizens to transfer wastes time and space, so having a hub with several types of transport on one lot is very efficient. When citizens can switch transports easily on the same lot, they do not need to find their way to another building, possibly hindering traffic while doing so, as they might need to cross roads. You don’t even need to connect all transport types the hub supports, it can be used as a regular stop on station and you can keep the other transport options for the future. The bus hubs support many lines on one hub building. Both the Monorail Bus Hub and the Ferry Bus Hub have several platforms for different lines to stop at, so your buses don’t have to line up to queue to one stop. 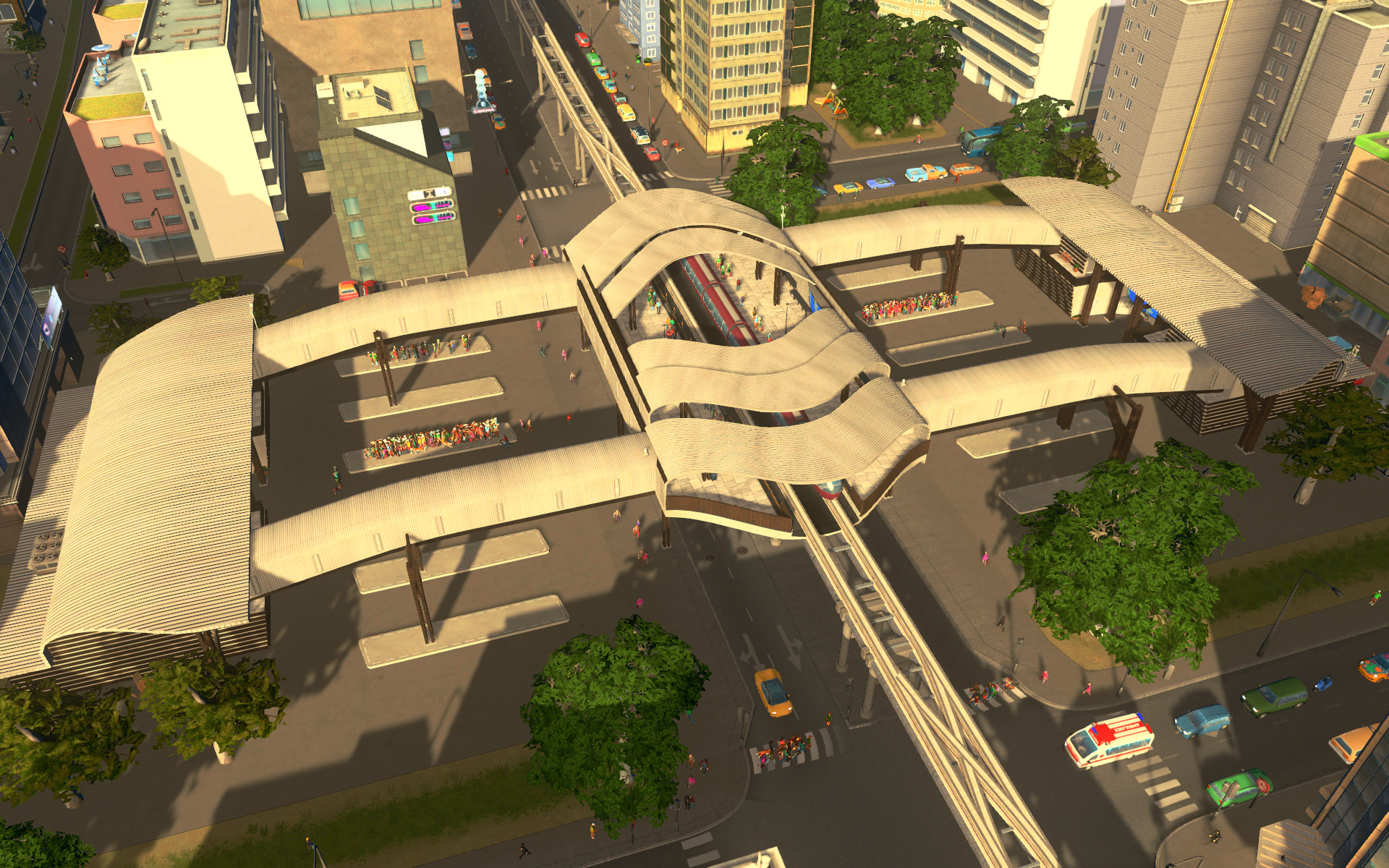 The new railway buildings, the end-of-line and multiplatform stations, have the possibility for different lines to you different platforms. This, combined with the new setting for accepting or not accepting intercity trains, gives much more control over train traffic. No more trains lining up to get to a station, they can have their own lanes! And as there are also one-way train tracks, there are even more possibilities. 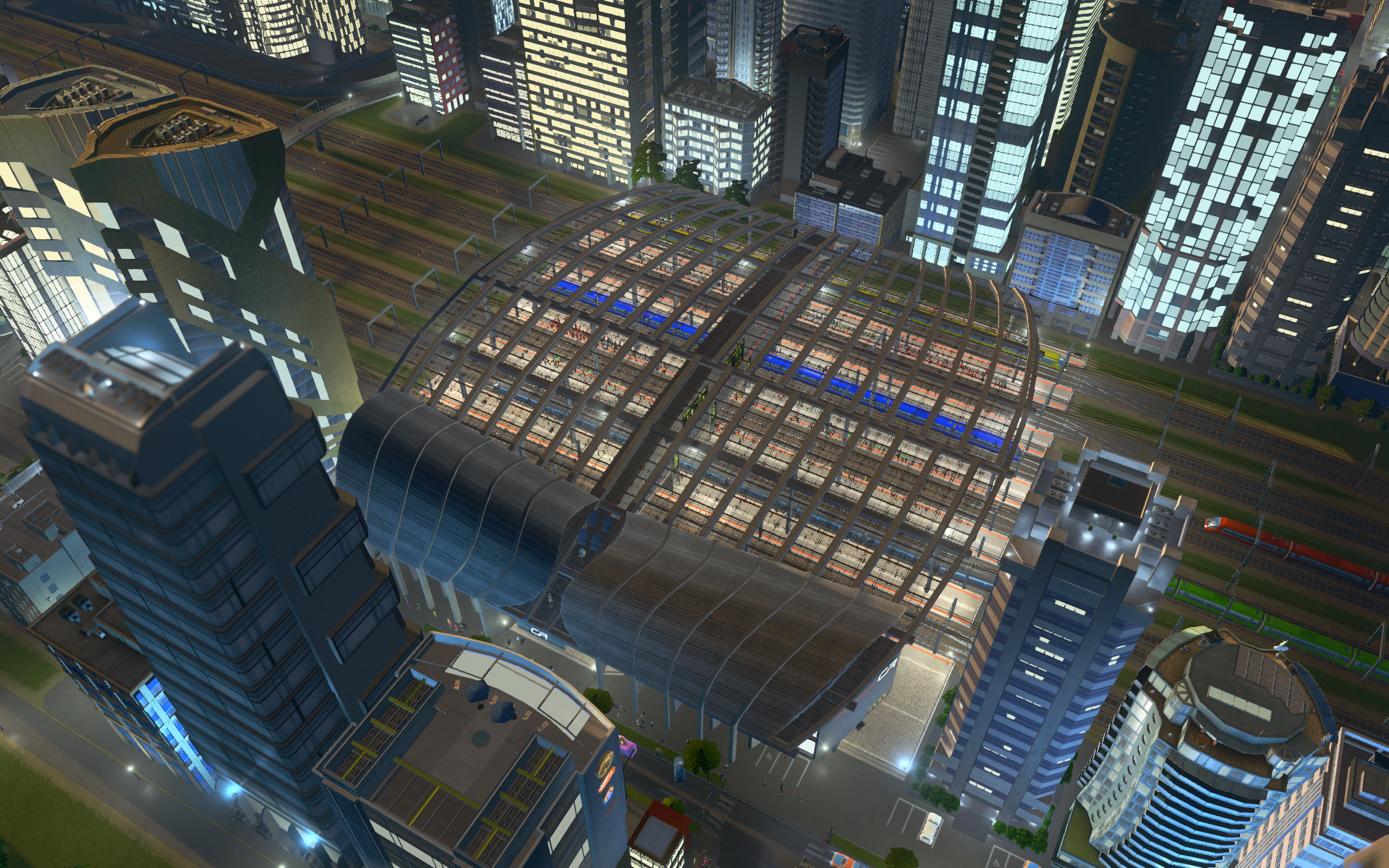 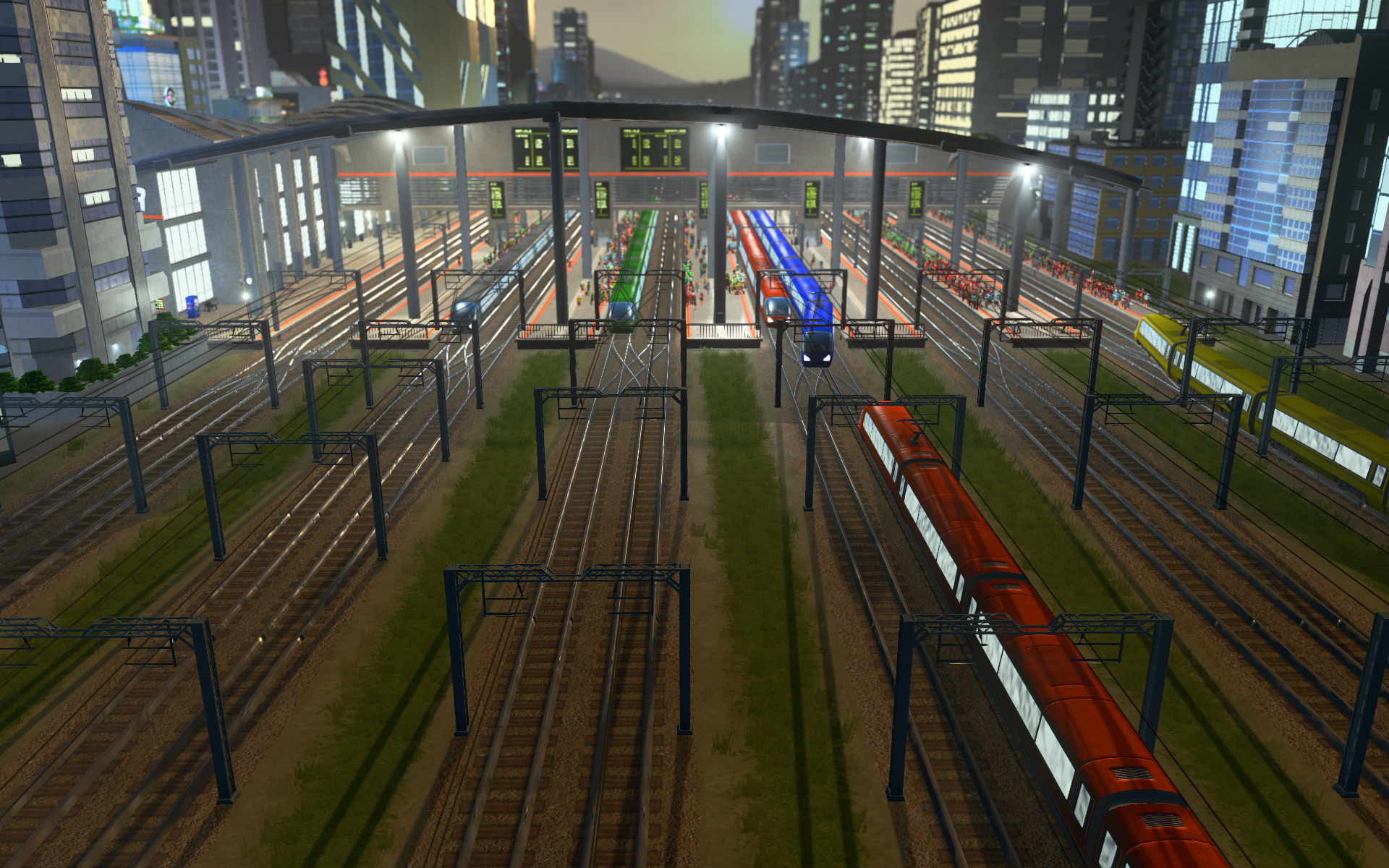 Trains on many platforms

And my absolute favourite features: stop signs and choosing if intersections have traffic lights! Before it was just that whoever went first in an intersection got to go. Now you can have a say in this. When in the Routes infoview, when you zoom in on an intersection, small buttons pop up. The center one controls if the intersection has traffic lights or not. If traffic lights are off, you can place stop signs to choose who goes first. Basically all traffic coming from behind a stop sign needs to actually stop before proceeding to the intersection. I have found this to be especially useful in roundabouts (well, that is kind of expected, as the game roundabouts used to not work like IRL roundabouts) when you can let the busiest street feeding the roundabout enter freely and have others stop. Or when you want a main street, where traffic has right of way, and all intersecting roads stop before joining. For this, there’s a shortcut, because it simply is not fun if you have a very long road and would need to go and click on each stop sign at each intersection. When you click on the road name, you can not only re-name it, but also set it as a priority road. This automatically sets stop signs to every road joining the selected road. By turning priority road off, all signs are removed, but you can also set priority on and then just go and remove a couple of signs if you feel that helps traffic best. The road will no longer be a priority road, meaning that the setting is off, but all of the signs set by the setting are still there and you can adjust them manually. 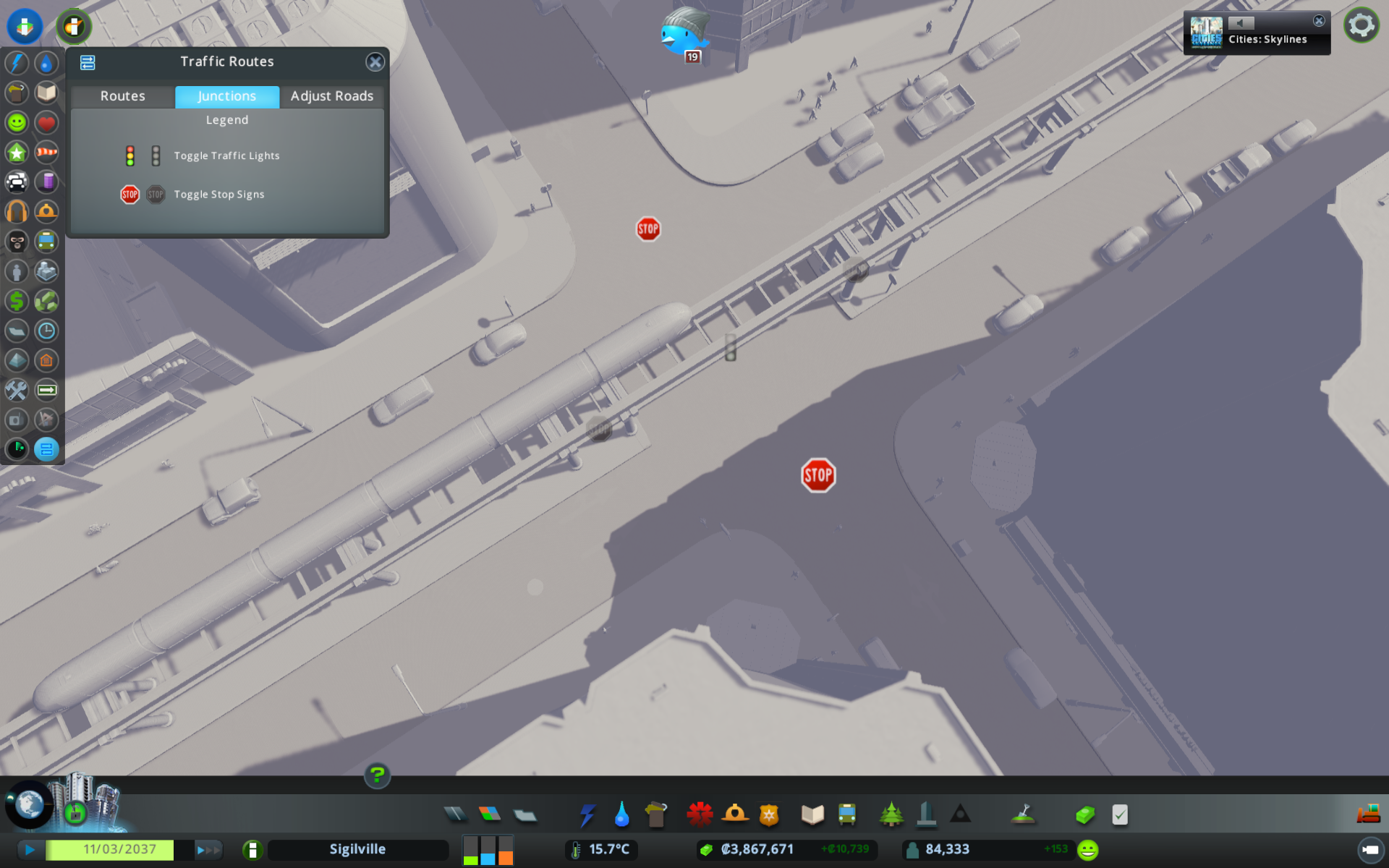 Stop signs in an intersection

If managing intersections is not your thing, you don’t ever need to touch the intersection rules. But if you are like me and can spend hours on adjusting the road network to get the traffic to work perfectly (though there’s always something to tweak, as the city needs change with aging citizens), you might really love this feature. The changes are instant, so you can try different combinations, then observe how they work, and adjust. The traffic reacts fast. 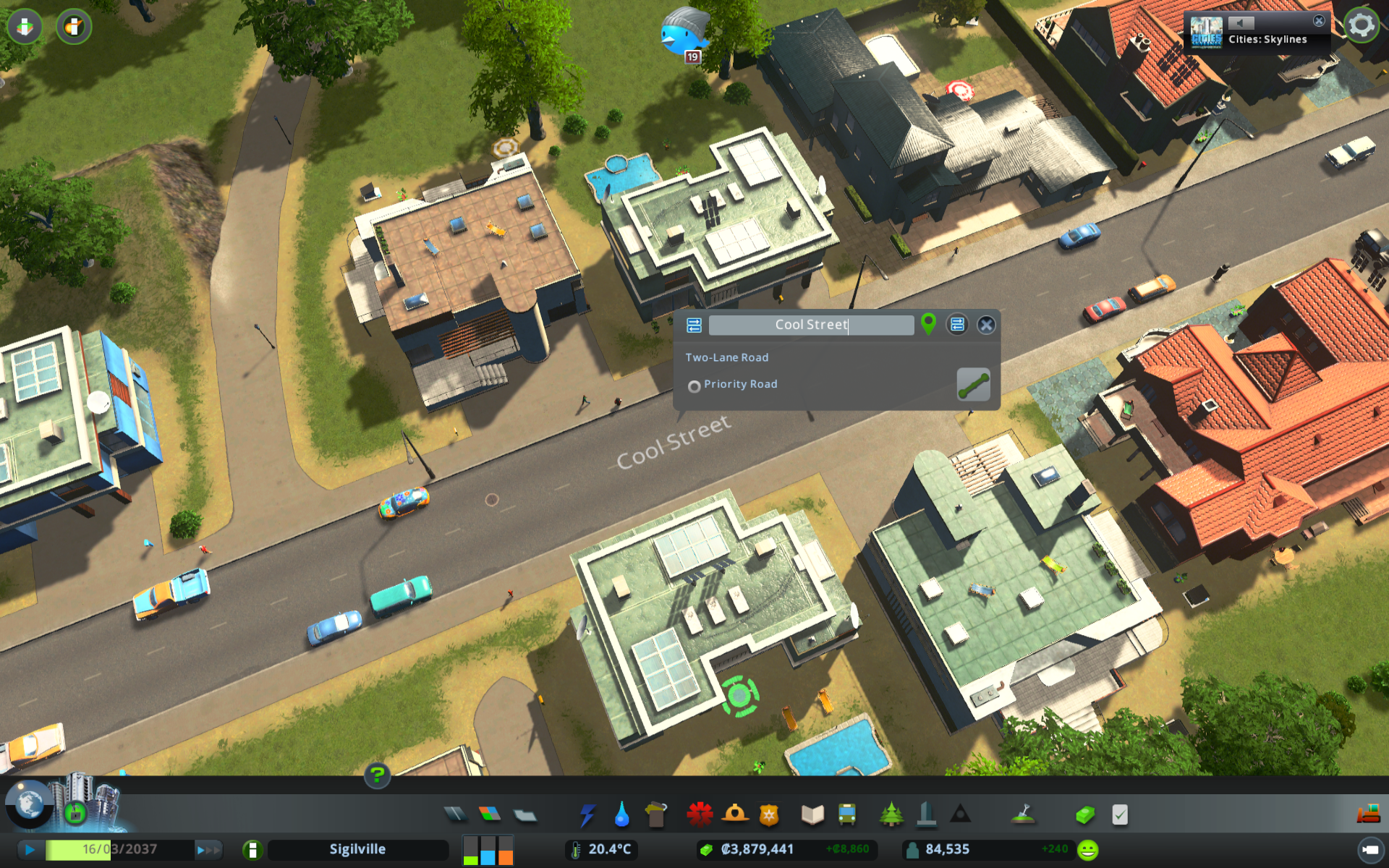 The naming of Cool Street

And as I mentioned naming roads, that is also a thing now! Every road gets assigned a name when the update is installed. If you want to change a name, just click on it, the logic is the same as with everything else in the game. Clicking on the name in the info window lets you rename basically anything it the game. If for some reason your road is cut up or the system does not understand what you need to be one road, you can adjust it by choosing Adjust road in the info panel and redefining what is considered to be one road.

Road names, intersection settings, hub buildings… I do hope you are as excited for this expansion as I am!

EDIT: Changed yield rules to stop signs to make the feature clearer. I had used the term yield, when in the end we went with stop signs, not yield signs. Sorry about that, totally my fault!

Another batch of good additions. Looking forward to trying it.

All looks good.
Any chance of pedestrian crossing? Flyovers built on to the road or simple zebra crossings?

Big train station looks great. Still would like to see one with 2 sets of track though.


Co_Karoliina said:
If traffic lights are off, you can place stop signs to choose who yields to whom.
Click to expand...

While this is true, a Yield is different than a Stop. A stop sign means stop. A yield sign means stop if someone is in the way, but don't stop if nobody is in the way. It would be nice to have both types of sign.
Toggle signature
Have:
Cities Skylines Deluxe, After Dark, Snowfall, Natural Disasters, Mass Transit, Green Cities, Parklife, Industries, Campus, Sunset Harbor, CCP: Art Deco, CCP: European Suburbia, CCP: High Tech Buildings, CCP: Modern City Center, CCP: Modern Japan, CCP: University City, Match Day, Pearls from the East, Stadiums: European Club Pack, Concerts.

That's awesome ! Now i can delete some mods like One Way Street Arrows, Traffic Manager President ed. (where i only used toggling traffic lights and yield), Traffic Report Tool, etc.
A big hug to all devs!
Now i need some decals like concrete, cobble stones, etc., some tools from More Beautification in vanilla game and ...

@Co_Karoliina why stop signes and no priority signes?
Why no other options from mod, like line connector and ability to programm lights on intersection?
Really hope you didn't killed that mode by this.. because I would like to have those other options from the mod, but with your additions that mod could be stoped at development (
Toggle signature
Deus Vult!

naming a road Steve? i'm sure my brother will like that!!
A

The only thing I am suffering without after this is fare management.
M

There is NO YIELD SIGN - there is only STOP sign, which creates traffic jam...
If you like to set priority, but with no stop when priority road is empty, wirite it! I hope CO will add YIELD sign - its not much work, but means a lot!
https://forum.paradoxplaza.com/forum/index.php?threads/yield-give-way-sign.1016874/

Oh god, it sounds so epic. I just can't wait to try it all out.

Plus it will be nice to be able to unsub some mods and get some semblance of performance back.

Or you know, what will probably happen, unsub some mods, see some new ones, and download 8 billion more mods, but, meerly a technicality.

Can we have an european end of line station with a classic XIXth century hall ? pretty please
M

great work!
...but i hope the TM President Edition will work - since not all options have been included in the core game.

Hubs:
what hubs will we get? any kind of a "list" since there are many posibilities between all the different traffic types... also more than 2 types in one hub?
i guess, that this feature will be modable so that modders can create own combinations
A

Muli-line metro stations would be even more useful,
M

Can we have an european end of line station with a classic XIXth century hall ? pretty please
Click to expand...

This one is great
http://steamcommunity.com/sharedfiles/filedetails/?id=512697107&searchtext=

Misiek said:
This one is great
http://steamcommunity.com/sharedfiles/filedetails/?id=512697107&searchtext=
Click to expand...

The hubs and ability to control intersection lights are great! Especially making it easy to change multiple intersections at the same time. But I was also hoping there would be lane control and a few more road types (2 lane ramp, 4 lane one way, and asymmetrical roads). Still, great job! I'm excited to get my hands on this. Been delaying upgrading my transit until this comes out.