Menu
Install the app
You are using an out of date browser. It may not display this or other websites correctly.
You should upgrade or use an alternative browser.
Age of Wonders: Planetfall 1514 Bug reports 1527 Suggestions 529 User Mods 78 AoW: Planetfall: News and Updates Archive 41 Multiplayer 53
Show only dev responses

Hi, welcome to Planetfall Dev Journal #22. This one is part of a two week piece on Operations (Ops). This week we'll be looking at the Strategic ops system.

Operations are used to support your Armies in the field, to increase the efficiency of your Colonies and to allow you to spy on your enemies. They vary from airstrikes to missile systems to more ‘magical’ psionic effects to edicts for your people called Doctrines.

As with AoW spells, most ops are flexible buffs and debuffs, and nice direct damage stings that can tip a battle or particular geopolitical situation in your favor. The usage of basic ops requires less planning then the slow building, upgrading and positioning of armies. Combat ops play a supportive role and won’t win battles or games on their own. Doomsday weapons Ops will win a game, while high level (covert) ops take careful planning to reap great rewards.

The types of operations available to you are Strategic Operations, Covert Operations (both of which are only usable on the Strategic Map), Tactical Operation[ (which can only be used during combat), and Doctrines (which globally affect your empire).

Most of these operations are unlocked through research, and are dependent on the Race and Secret Tech you picked. Operations require the expenditure of Energy and operation points, and sometimes additional resources such as influence. 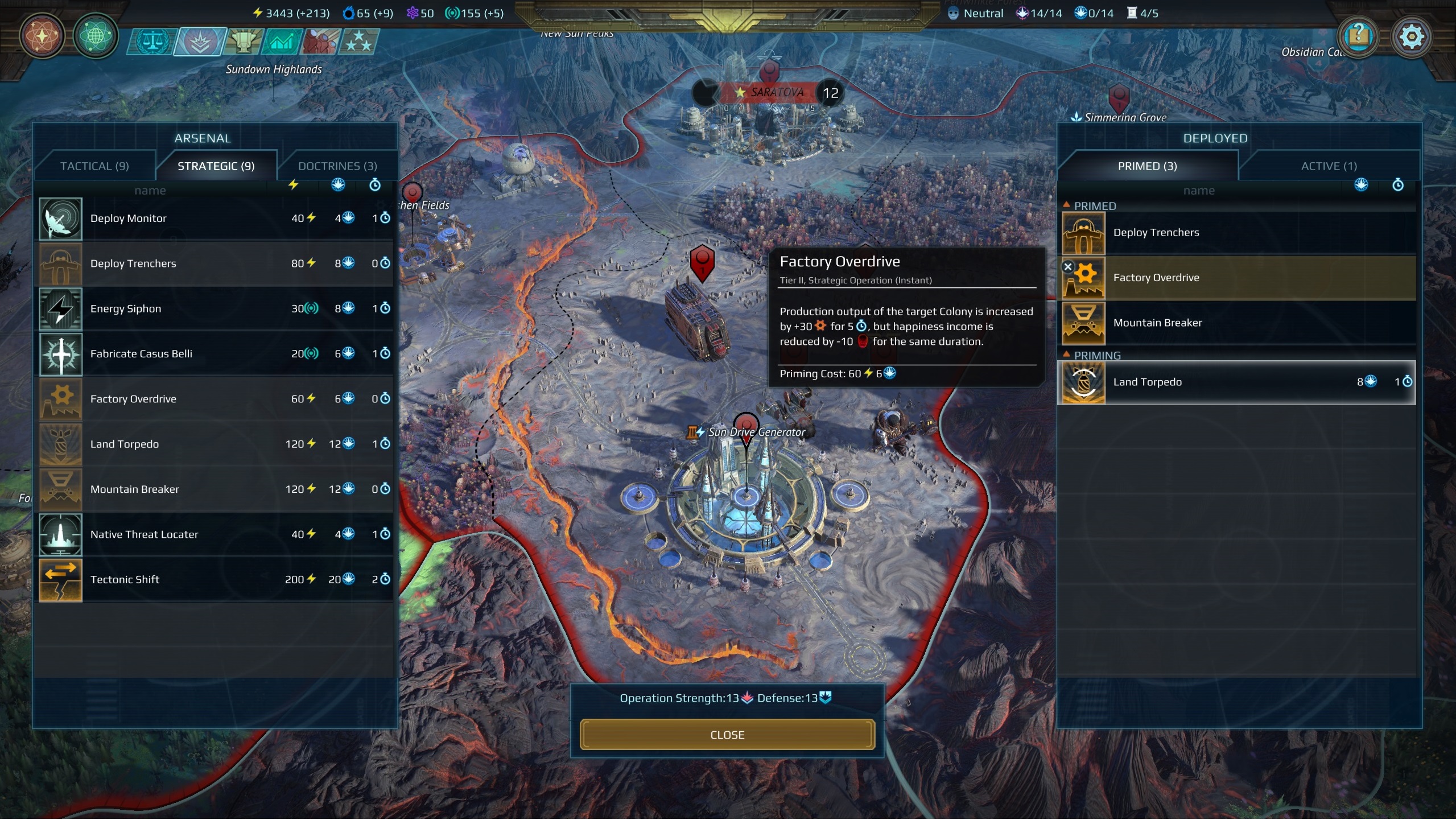 Three Dvar ops ready to be deployed, one is being primed. Prepare a Pearl Harbor surprise attack​
The Priming systems allows you to ready multiple ops at once (but only one instance per operation type). Priming was added to give you more flexibility when using ops compared to AoW3’s spell system. There were many situations where you’d cast a spell over multiple turns, and then had to wait for the right moment to use it. Holding on to this readied spell would block any other strategic spells from being cast. Another advantage is that you can pause an operation from being primed and resume it later. 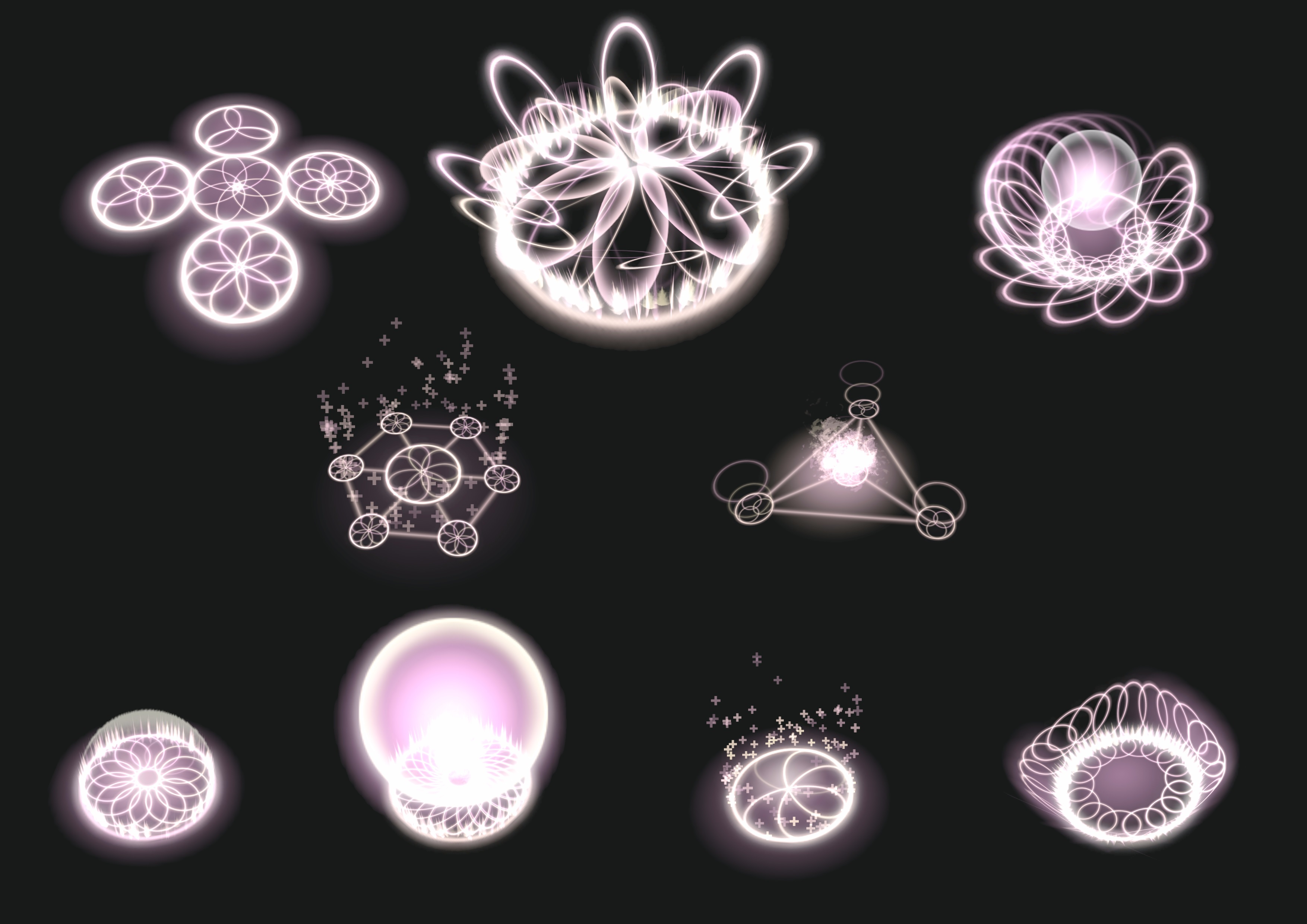 Operational Defense is a measure of how well protected you are from Strategic Operations and Covert Operations belonging to other players. The higher your operational defense, the lower the success chance of any operations that target you, your colonies and your armies.

Operation Success Chance: Covert ops have a 60% base chance of success. Each Point difference between the attacker’s Operational Strength and the defenders Operational Defense will add or subtract 5%. There caps on 10% and 90% success rate.

Your Operational Strength and Defense can be upgraded globally by researching Empire Upgrades, and enacting Doctrines. Operational Defense can also be buffed through local, per colony effects to protect you from destructive enemy attacks.

Operations that require a success roll generally have a reduced-strength failure effect, so using these ops is never in vain. Note that the outcome of a success roll affects the detection chance of Covert Ops.

Tip: A particular undisclosed faction has a Hero ability that increases Operational Effectiveness for enemy Sectors it is located in. That same faction has a doctrine that does extra damage on units of a party they have Infiltrated. 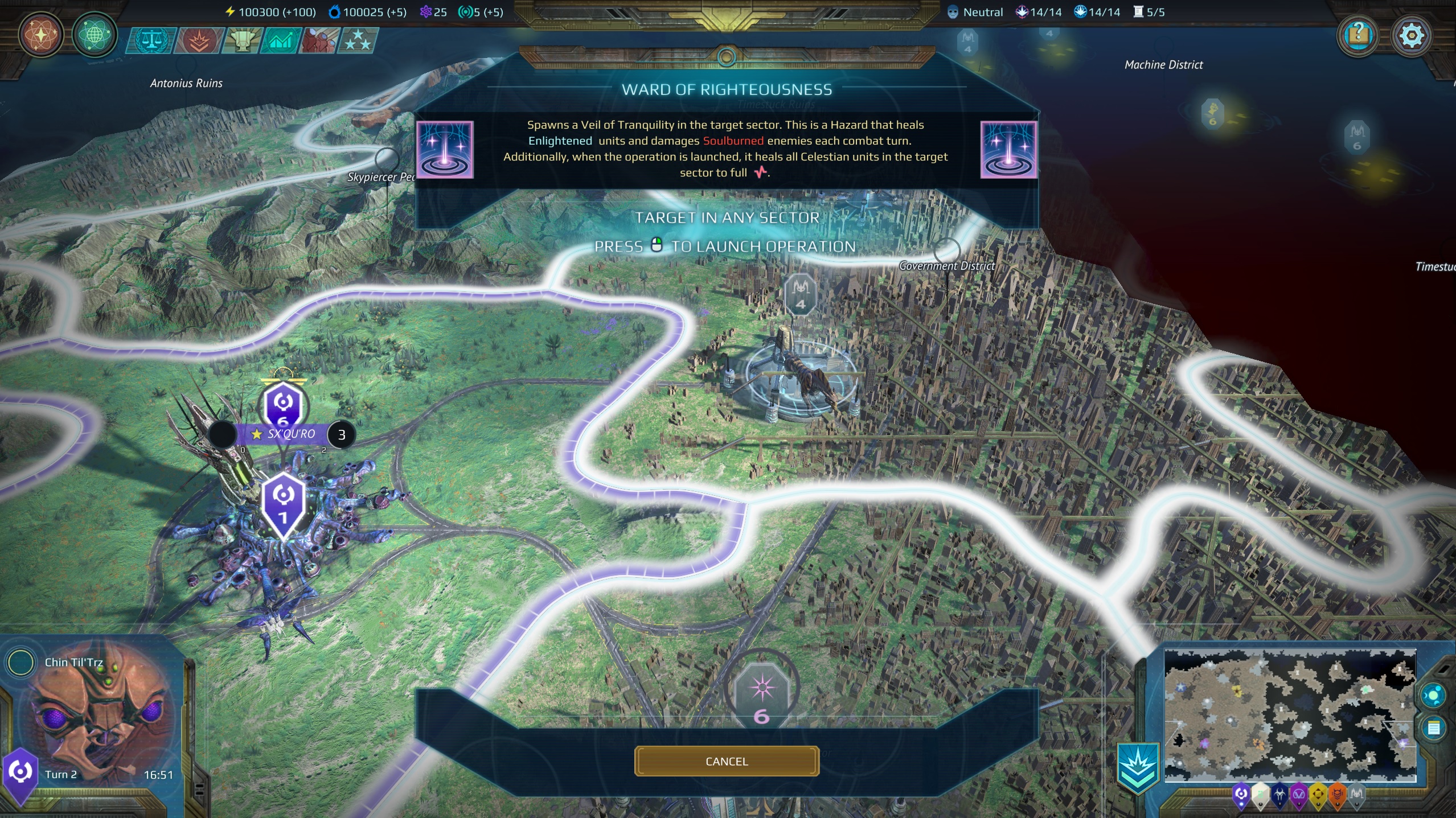 Selecting a target Sector for a Celestium Op
​ 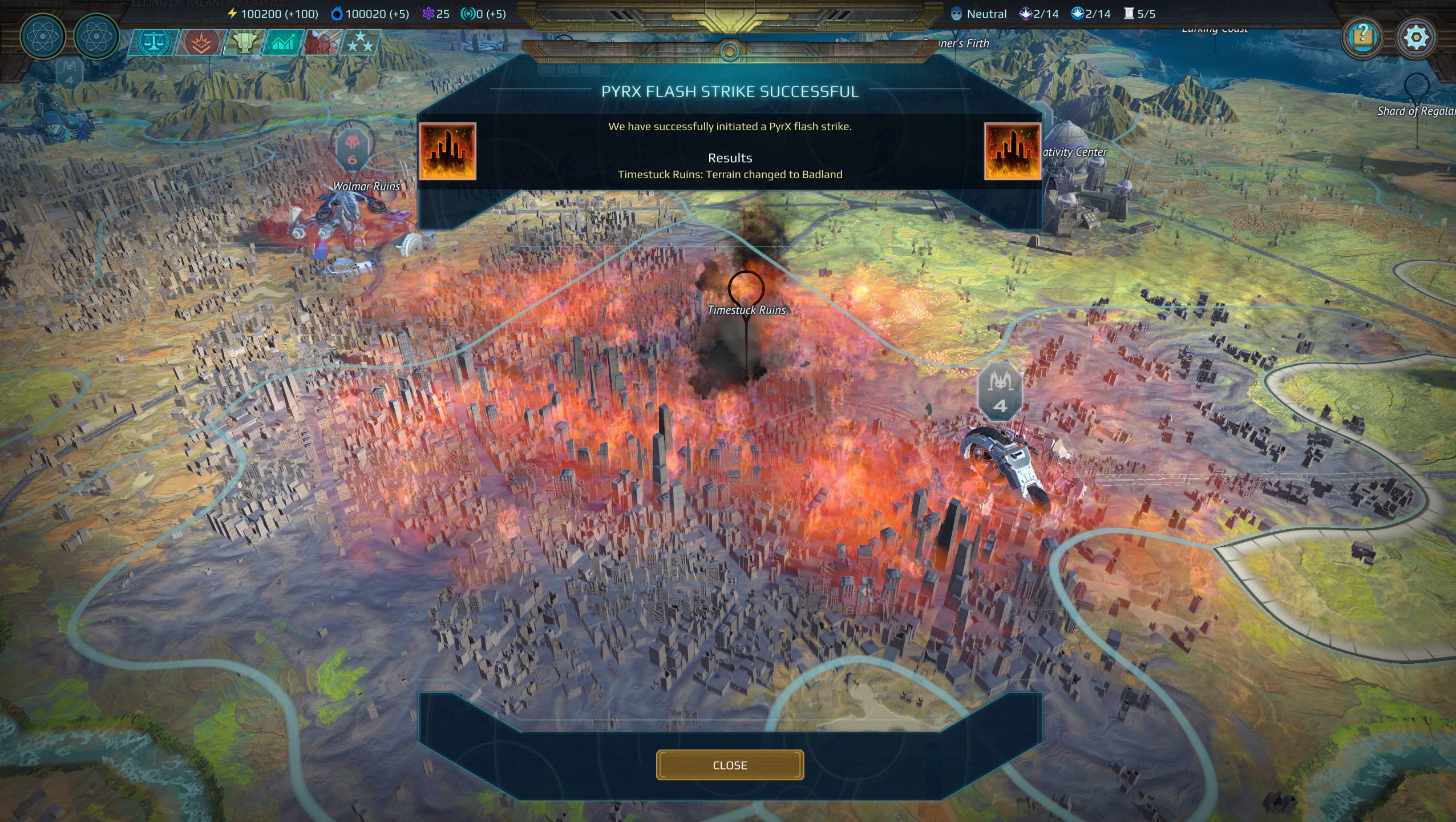 Strategic Ops have a results window, indicating the op was successful or failed. ​ 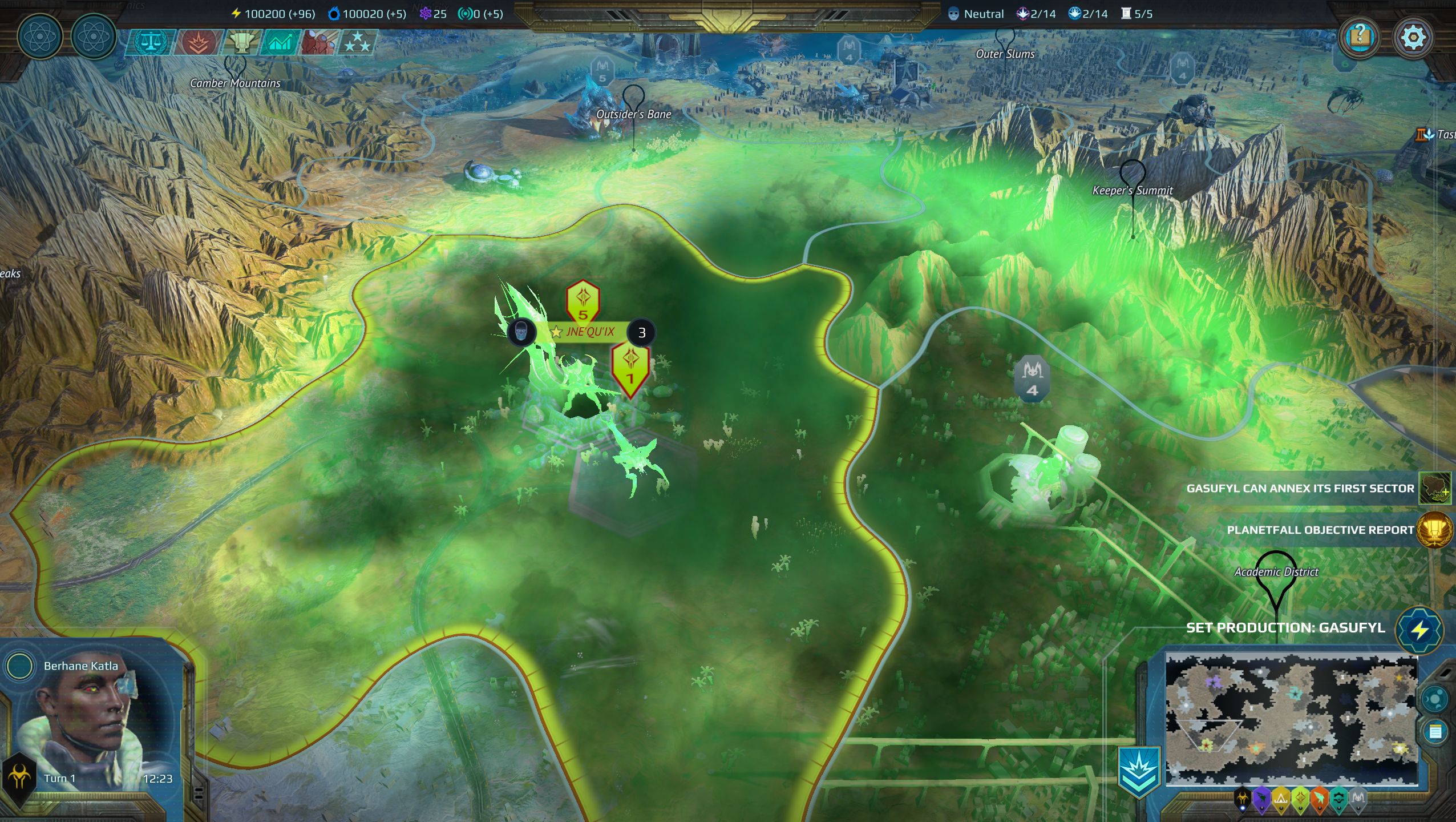 Spreading the XenoPlague​
Duration and Sabotage

Offensive economic debuff Ops have a fixed duration so it is possible to sit them out as the victim. In AoW3 you had to disjunct or they’d last forever. Of course, it is possible to cancel enemy ops; this is done through the Sabotage operation. Sabotage uses the operational offence and defense values. When a Sabotage fails it shortens the duration. The cost of Sabotage is dependent on the priming cost of the target Operation.

When zooming all the way out on the world map, the Overview Map of the planet appears; one of the lenses is the Operations view, which will list the operational defense per sector as well as the icons for active localized Ops. The overview maps are still work in progress, but here is a preview: 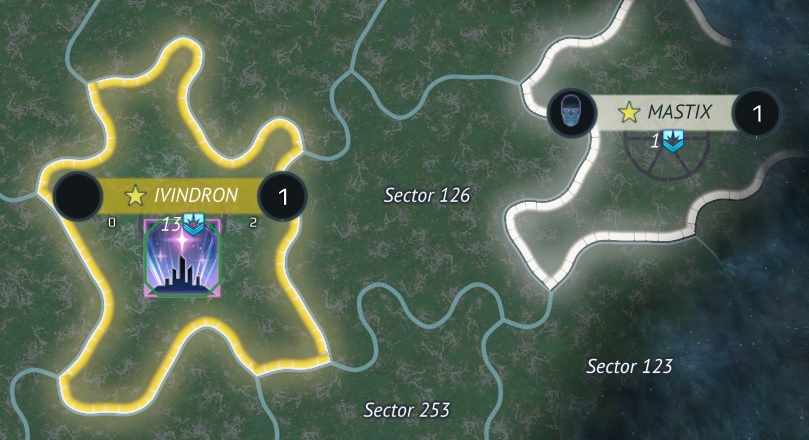 Great Dev Diary, but what a cliffhanger saving all operations apart from strategic for next week That doesn't make waiting easier at all
Also

LennartGS said:
A particular undisclosed faction has a Hero ability that increases Operational Effectiveness for enemy Sectors it is located in. That same faction has a doctrine that does extra damage on units of a party they have Infiltrated.
Click to expand...

sounds very very cool, so it must be syndicate

I like the inspiration for Celestian visuals, as they have an appropriately mystical feel.

The three main things that stand out to me here as being significant changes from the previous games:
1) The ability to store Operations for multiple-in-a-turn Alpha Strikes or for emergencies, although it does appear that you can't store duplicates(the left side has greyed out the ones that are primed), which is good.
2) Offensive Operations can actually fail, unlike in the previous games. This is huge.
3) None of the non-Doctrine Operations are permanent, and thus also don't cost upkeep. Take the good with the bad(in both directions of attacker/defender).

LennartGS said:
but only one instance per operation type
Click to expand...

Each player will have a couple of each type. Damaging an entire army multiple times or deploying an army of many units both seem too powerful, but you have primed both mountain breaker and factory overdrive, which both seem like they'd be colony buffs.

I believe it means one torpedo at a time, but that one can have:


Questions from the floor:

Mr Sas, how many ops are there?
One assumes one learns ops through research - are there other ways to learn ops. Basiclaly, is there a version of the crypt (? may be the haunted library) building from aow3 which gave you a spell if you cleared it?
Are there casting points?
Edit:

In several games, there is the option for a spell that turns your sheep into minotaurs, for example, or your enemies to sheep.

AoW was obviously a complete failure due to this lacking feature.

Are there plans to incorporate this in Planetfall?

The Guild of sheep-maybe-not-sheep-please-don't-ask-we're-sensitive-about-it would like to know.
Last edited: Dec 13, 2018

Once per Op. So yes you can hit a single target with multiple different direct damage strikes. However, it hasn't raised big balance issues yet. World map damage is a dealt as %... and these types of strike are often about the status effects.
Toggle signature
Lennart Sas
Director Planetfall, Managing Director, Co-founder @ Triumph Studios
Planetfall Development Diary List
Follow me @ Twitter

All changes from AoW 3 make a lot of sense and seem indeed to be improvements. Other than that I find myself nodding to Fluksen's comment.

BloodyBattleBrain said:
Mr Sas, how many ops are there?
One assumes one learns ops through research - are there other ways to learn ops. Basiclaly, is there a version of the crypt (? may be the haunted library) building from aow3 which gave you a spell if you cleared it?
Are there casting points?
Click to expand...

The majority of ops come from Secret tech and choice of race and associated weapons tech. Additional ops you can get from the field, primarily NPC Factions.

Casting Points are split in two; tactical and strategic now have their separate pools.

Jolly Joker said:
All changes from AoW 3 make a lot of sense and seem indeed to be improvements. Other than that I find myself nodding to Fluksen's comment.
Click to expand...

This appears to be one of those rare instances where you and I totally agree.

Really like the priming mechanic. Being able to store "spells" and keep them in reserve is a great change.

It looks like there are valid alternatives to just brute force technologies especially combined with the spying technologies, I'm looking forward to how much can be done with this


BloodyBattleBrain said:
Are there casting points?
Click to expand...

Perhaps this will answer your question?

BloodyBattleBrain said:
This appears to be one of those rare instances where you and I totally agree.
Click to expand...

I think we actually agree in MOST inctances, it's just that we tend to debate rather passionately the rare instances when we totally DISagree. (When we agree, there isn't much to talk about anyway, obviously.)

That said, I'd like to apologize for stupidly escalating things in the last debate we had when we totally disagreed. It didn't serve any constructive or even positive purpose, and I'm sorry for that.
H

I have no questions and am happy with what I have seen here.

Has anything been revealed about the Celestian op...

I ask because I recall reading about the Pyrex bomb and the xenoplague, but Celestian...?

Celestian tech was used in Kir'ko stream but I don't think it shows any op.
I guess they will be similar to AoW 3 theocrat's spells.
I wonder will we get dev diares for other sevret techs or just for Promethean?

I, for one, would want to keep as many strategic Ops "primed" as possible. I'm sure that others feel the same way, so I'd like to propose a Strategic Ops Priority List UI:

Your Ops points would go first towards priming your first priority, then your second, etc. If you use a high-prority Op, any Op you were priming would pause, and the points would be redirected to the priority Op. What do you think?

I would have to play the game for a bit to determine whether my Op preferences are going to remain static during a game.
While a build queue is a good idea, I'm not convinced that an auto queue is going to work. That assumes that I will always have the energy/influence/Op points available to have it running automatically, and I doubt that will be the case. It also assumes that I will always want certain Ops at higher priority than others. If I'm switching between war and peace throughout a game, this is unlikely to be the case. (and if my priorities never change, I'm concerned that the game sounds rather monotonous.)

Jolly Joker said:
I think we actually agree in MOST inctances, it's just that we tend to debate rather passionately the rare instances when we totally DISagree. (When we agree, there isn't much to talk about anyway, obviously.)

That said, I'd like to apologize for stupidly escalating things in the last debate we had when we totally disagreed. It didn't serve any constructive or even positive purpose, and I'm sorry for that.
Click to expand...

It takes a real man to apologise. Hats off to you sir.
Toggle signature
Lorem ipsum dolor sit amet

Limited duration w/o upkeep is a good change. Sorting thru active global effects in AoW3 could get challenging.