This is the third and last development diary on what map and setup changes patch 1.26 for Europa Universalis IV will bring. This time we will turn our attention to the north and east. We will start by turning away from India for a bit and looking into what the situation was like in Burma in 1444 and then return to have a closer look at Bengal and Tibet.
Previous Diaries have shown changes to South India and North India.

We will also be taking a second look at what new formables we will be introducing with the patch in India. 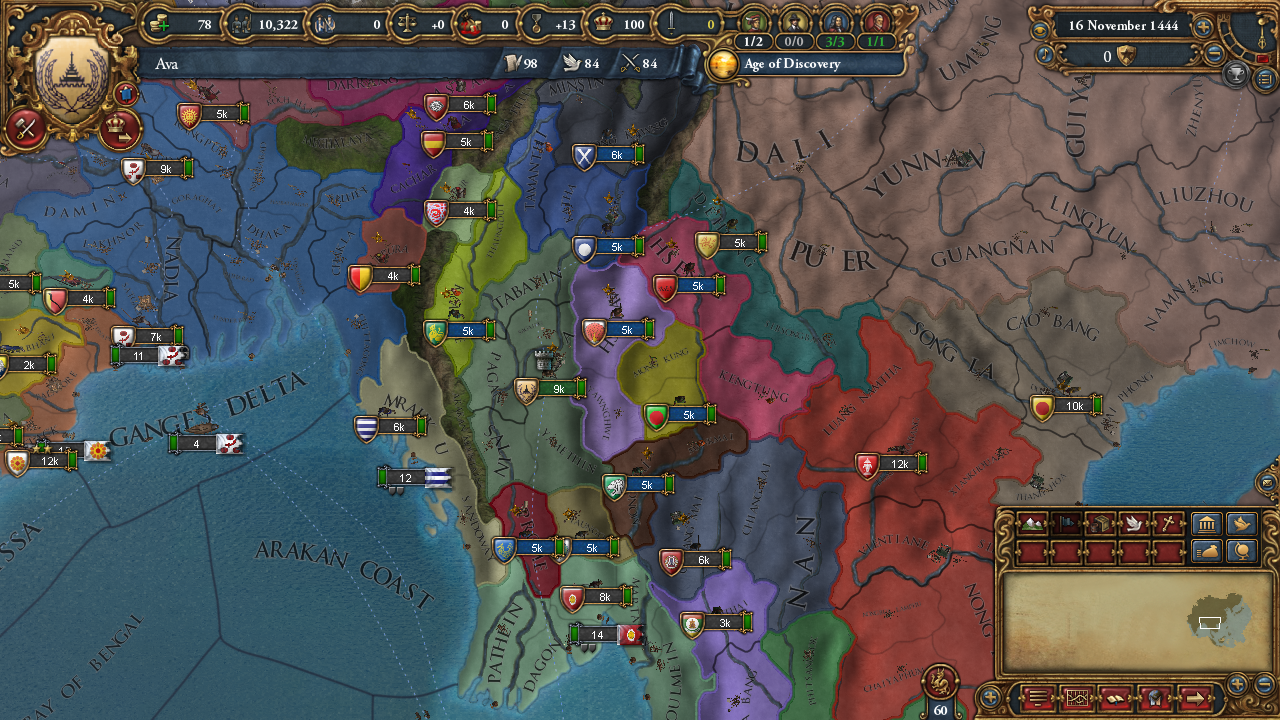 Today we move our attention east to the Irrawaddy valley and the region of Burma. For almost 500 years Burma was dominated by the Pagan Kingdom but by the end of the thirteenth century the Yuan dynasty destroyed Pagan through repeated invasions. In 1444 Pagan’s legacy lives in the form of an entrenched presence of Theravada Buddhism but the region is still largely divided into the various fortified Shan states that were once vassals of Pagan.
In the last 80 years the Burmese Kingdom of Ava have attempted to pick up the fallen Mantle of Pagan, building a city state using the organization and administration of the former kingdom.
Ava has in short time risen to be the overlord of the Shan Soaphas but would historically itself be replaced by the Shan states as they united in the Shan Confederation to overthrow their old master.
It was not however until the 16th century that the small kingdom of Taungu would once again unify the entire region and then turn its attention towards South East Asia and India.

The Burmese region has been given a thorough overhaul in patch 1.26 by our recent addition to the EU4 team @neondt ! To better portray the situation at the start and the rising Ava kingdom we have added a number of new Shan and Burmese states, most of which are tributaries of Ava at start as well as a general increase in the depth and province density of the region.,

To further highlight the separated nature of Burma the inland is now also its own, Burmese, Trade Node with trade incoming from Chengdu and outgoing to Bengal and the Burmese culture group has been separated from the Tibetan group.

In the government overhaul in the, as of yet unannounced DLC, there will also be a “Mandala” government reform that is available to the Burmese and countries in South East Asia. 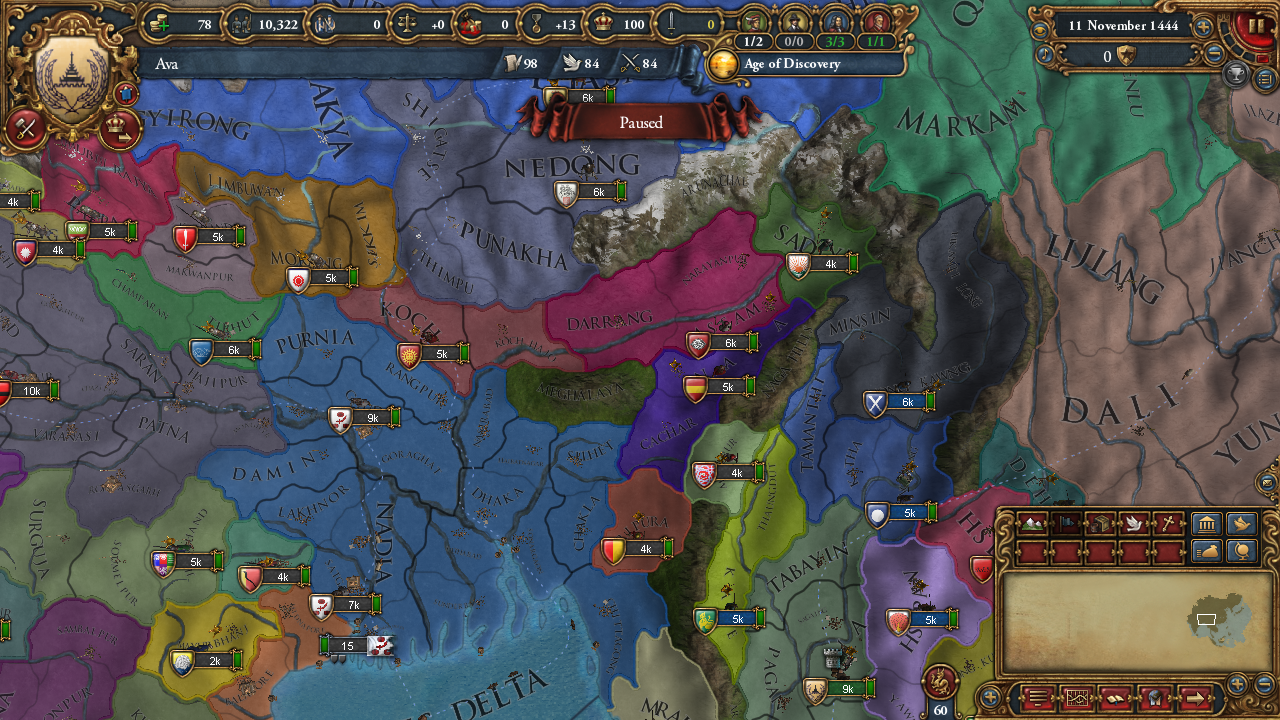 Much like most of Northern India Bengal in 1444 is a state that has broken free from the Delhi sultanate. Unlike most of the other Sultanates however Bengal is a region that has often been both autonomous and rebellious. The Ilyas Shahi dynasty broke their ties with Delhi as 50 years before the city fell to Timur and have spent time since building a strong state kingdom around the mouth of the Ganges. In the decades preceding the start of the game the Sultanate has just gotten rid of the line of a Hindu Vizier who through his abilities had risen to control the Sultanate while also expanding on the expensive of the nearby states of Tripura and Orissa.

To the north the Ahom kingdom of Assam has come to dominate the Brahmaputra valley over the last 200 - years. The Ahom dynasty has its roots in Mong Mao and have come to displace the local rulers while undertaking a rapid “Ahomization” of the local population, introducing south east asian methods of agriculture and administration. In the far northern uplands the older kingdom of Sudiya still lingers but its ability to withstand Assamese, or indeed Burmese, invasions is by now limited.

In 1.26 Bengal and its surroundings along the Ganges and Brahmaputra have been expanded with more provinces and a higher level of detail. A Kochi culture has been added for northern Bengal and the existing Koch state is its primary tag. New incoming trade node connections have been added from Lhasa and the new Burma node.

We have also taken the opportunity to expand on the strategic nature of the Burmese geography. Adding more depth in the form of provinces as well as wastelands to better show the perils of navigating the valleys of Upper Burma. Eliminating the odd situation in previous patches where Ming would be able to immediately invade Burma and then India from the get go the new setup means that there will be a lot more land to cover for an enterprising Chinese state looking to expand its tributary network in India or Burma.

Manipur retains its position as a gate through the Arakanese mountains, and might still play the role they had historically as a surprisingly strong and able enemy of the Shan states and the Indian hill countries alike.

New Playable Country in 1444:
Mong Kawng - Shan state controlling the valleys of upper Burma, borders the Tibetan region in the north and the Sadiya kingdom in north eastern Assam to the west. 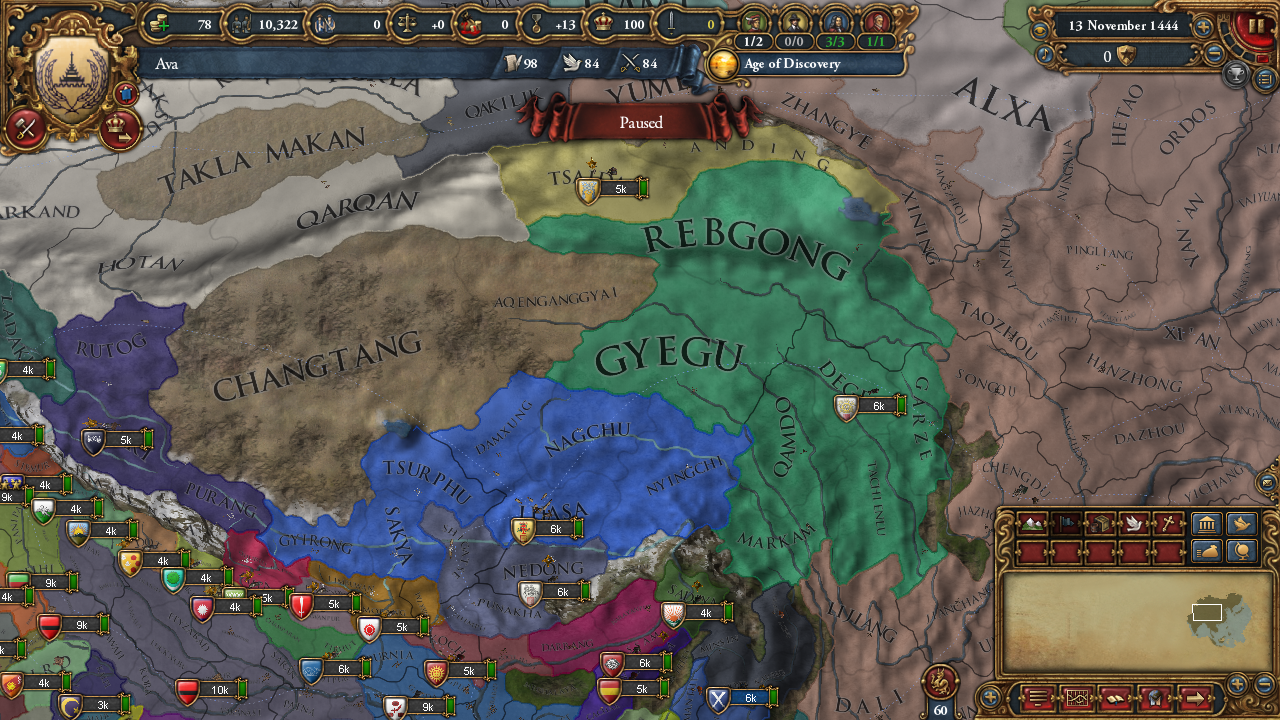 In 1444 Tibet has seen a recent powershift from the southern Phagmodrupa dynasty in the Yarlung valley to the Rinpungpa Dynasty (U-Tsang in the game). While the Phagmodrupa, formerly overlords of the Rinpungpa and “Masters of Abisheka” according to the Ming, are no longer as strong as they once were, they still retain control over their homeland and would continue to maintain an independent presence until the 17th century.

In 1.26 we have once again have help from @Fryz with research and setup for Tibet. Like in the other focus regions we have added provinces and countries where we felt it appropriate, such as Sakya, headquarter of its eponymous school, and Damxung, the strategical gateway to Lhasa on the ancient Xi'an-Lhasa road.
Perhaps most impactful however are the new wastelands that have been added to better reflect how restrictive the geography of the Tibetan plateau can be. In the far east the Hengduan range now restricts access between Tibet and China, much like the added wastelands in Burma to the south also do.
The unsettled Changthang highland has also gone from a gigantic normal province to be a wasteland cutting off direct access between eastern Tibet and Guge in the west. Together with Aqenganggyai it also ensures that central Tibet is still cut off from Tarim basin while the new province of Rutleg makes access towards India from there somewhat easier.
In the north east the new Qilian mountains also restrict movement between northern Tibet and Gansu.

I promised a look to what new formables patch 1.26 will give to the game. Two had already been shown in a previous diary but are included below for a complete list:

Last but not least the requirement for the Bharat or Hindustan formations have been made considerably harder. Expect to be masters of India before being able to title yourselves as such

"Last but not least the requirement for the Bharat or Hindustan formations have been made considerably harder. Expect to be masters of India before being able to title yourselves as such"


Nepal:
Since u can now form it, it will probably be the go to nation to be formed in Multiplayer by any asian that got week combat ideas
Last edited: May 8, 2018
V

Nice ! Any changes for the Mandate of Heaven and/or Ming ?

Does Burma now have more development than Sweden or Castile and does this mean that over the course of 365 days more than 2 people will have a go at whatever it is Burma are supposed to have done over the time period?

That's an awesome formation list you got there Trin, thanks a lot.
T

Really interested on what the effect of Mandala government and whoever get it.

You have really outdone yourselves here.

I am a little upset that you’ve left most of south-east Asia, but I can understand why, especiallynwith more interactions between Burma and India.

Hope fully in a few patches down the line, Thailand, Laos, Cambodia and a Vietnam can all get a little love.

But please give us Iberia next major update.
Toggle signature
If I could change my nickname I would update it to Chairman Meow (JP)

By popular request here is an overview of the entire subcontinent zoomed out. 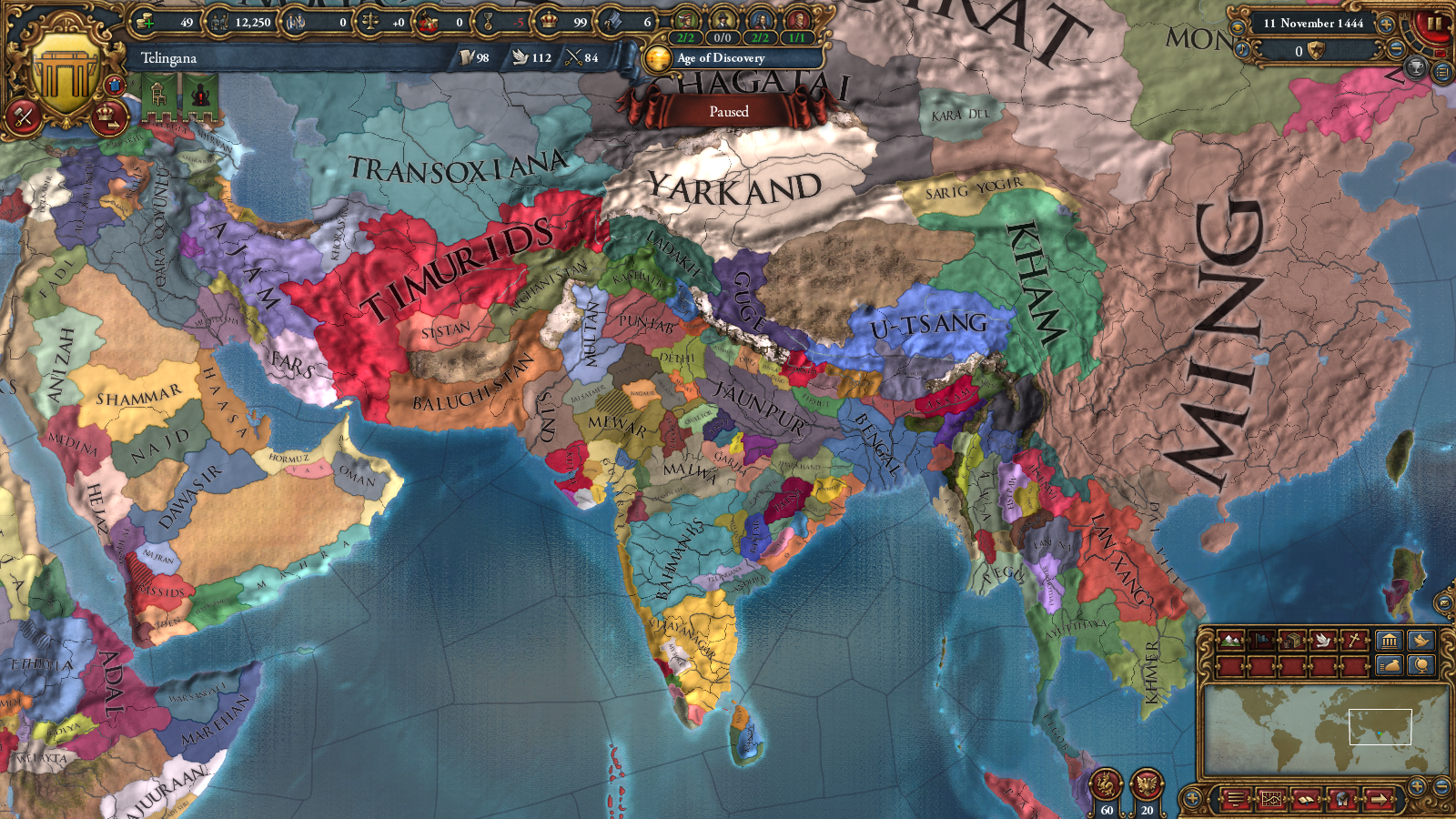 Toggle signature
No fighting in here! This is the war room!

You have really outdone yourselves here.

I am a little upset that you’ve left most of south-east Asia, but I can understand why, especiallynwith more interactions between Burma and India.

Hope fully in a few patches down the line, Thailand, Laos, Cambodia and a Vietnam can all get a little love.

But please give us Iberia next major update.
Click to expand...

I would love to get to work on South-East Asia. Sumatra in particular is in need of love imo. We'll see what the future holds.
Toggle signature
Victoria 3 Game Design Lead
N

How about a trade map?
M

I would love to get to work on South-East Asia. Sumatra in particular is in need of love imo. We'll see what the future holds.
Click to expand...

Trin Tragula said:
By popular request here is an overview of the entire subcontinent zoomed out.

Thank you that really helps because now we can see which country goes where.
Toggle signature
Baal: You can't be serious.
O'Neill: Yes I can... I just chose not to.

Should there be more impassable terrain in northeastern India?

I must say, the fact that Ava is independent and has its own tributaries makes me slightly dubious of their survival in the hands of the AI. Won't Ming swiftly and aggressively destroy their control over the region? As of now, there seems like no mechanic to slow them down, unlike their relationships with hordes (Manchu) and naval powers (Japan).

It seems like a lot of work has gone into a region that might get conquered by China in the first 50 years...

Trin Tragula said:
Shan and Burmese states, most of which are tributaries of Ava at start
Click to expand...

For people who don't have Mandate of Heaven, will these all just be independent tags?
Toggle signature
Don't nerf blobbing, create alternatives to blobbing: https://forum.paradoxplaza.com/forum/index.php?threads/soft-projection-of-influence.1061862/
Don't nerf blobbing, make the AI co-operate against blobbers: https://forum.paradoxplaza.com/foru...tately-quadrille-diplomacy-manifesto.1087165/

What will next weeks Dev Diary be about?
U