Tips for my Planning? Based on Constantinople / Istanbul

Jump to latest Follow Reply
Menu
Install the app
You are using an out of date browser. It may not display this or other websites correctly.
You should upgrade or use an alternative browser.
Cities: Skylines 5711 Support & Bug Reports 7172 Suggestions & feedback 2859 Modding & Resources 1814 Official Information & Announcements 133 City Journals and Let's Plays 478 Cities: Skylines Console & Windows 10 Edition 834

To start with = Idk how active this forum actually is, and how often these threads appear, but I guess not so often for both? Am I correct or wrong?

Background: So I want to build an Old Capital City based in Europe. But one that was built to have great potential, idk around 1200-1500 or even earlier? (Thinking Constantinople / Istanbul) (The maps is from the workshop "Harbour Castle")
Been wanting to build this for a looong time but I always give up in middle of planning (also planning ingame) cause of not getting it the way I want to, and help would have been greatly appriciated.
I would call my self a decent skyline gamer that don't game much anymore (some of it is reasons listed above) but however never played/built til "late" game with Airpoort and Harbours.

Anyway, here's what I've got: 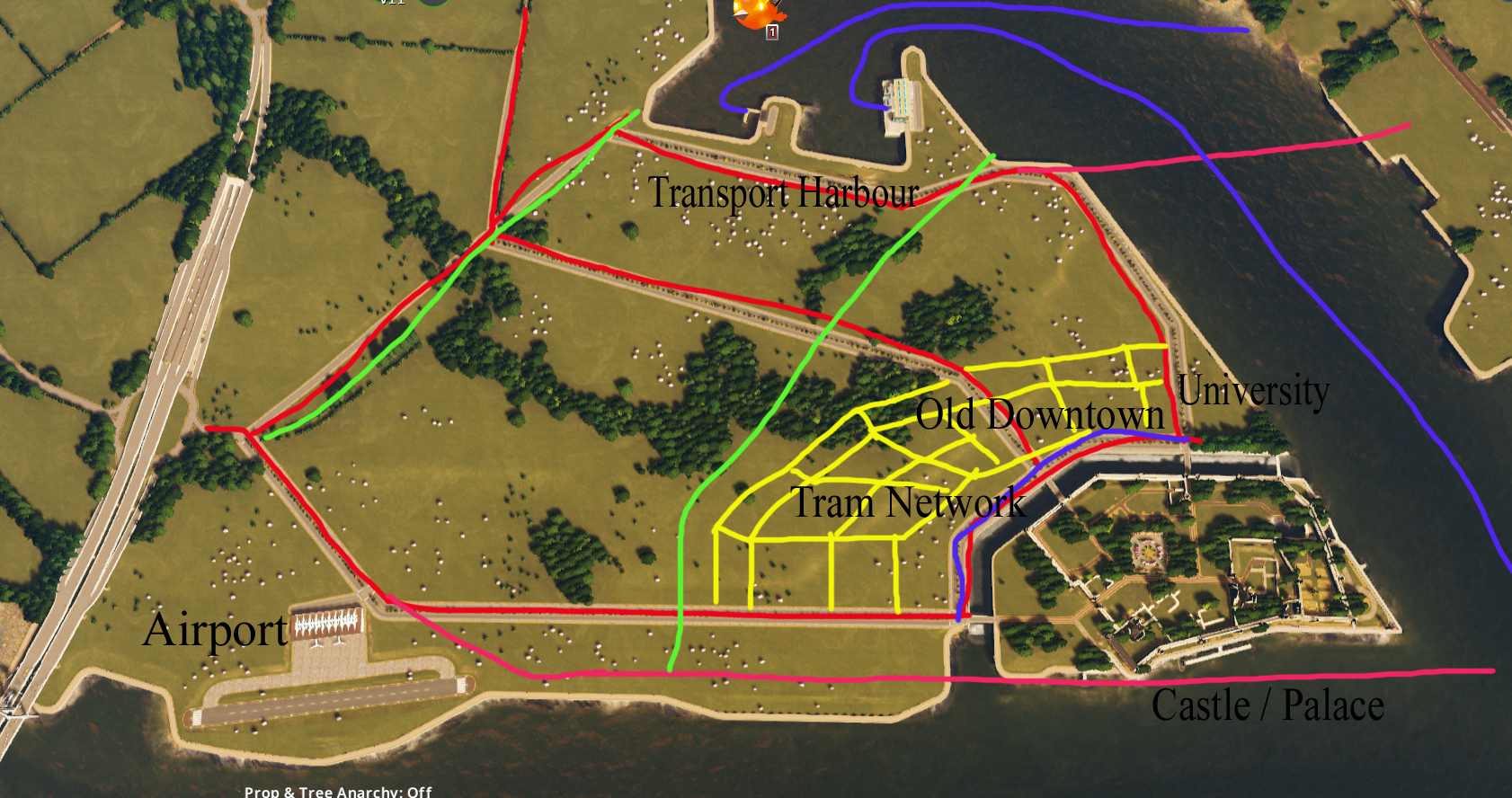 What I've got so far is,
University, Old Downtown, Tram (not finished as you can see), Airport, Harbour and the Castle / Palace.
I have plans of a large industrial harbour just south of this picture on the other side with its own Highway access. (Also another large town on the East side)
Just North of here is planned to have a "Newer" City Downtown with a large Train station, Metros etc. (Metro gonna also get to Old Downtown one way or another)

So that's the gist of it! Anyone have some tips or things they would rather do instead? parhaps I may have misplaced the ideal Airport parhaps? Anything that would give me thought is greatly appriciated! I really want to finish this build of mine that I've had on my mind for years!
Toggle signature
CK2 mod Author - Dynamic Cultural Titles (Ironman)

The draft looks nice and more or less realistic for an old city. What I noticed is that the scale seems slightly wrong. I would expect the airport to be further away, even if it is an old runway that was built long ago. The area between old town and highway generally seems smalll, but I might be mistaken.

I also would expect an old, maybe smaller train station near the old town. But you could of cause also pretend that such a station existed and was then teared down or became part of the tram network.

Anyway, a nice project. Have fun building it!
Reactions:

Yeah, I decided to remove the Airport entirely from the oldtown and rather have it further away somewhere else.
Small for an old town you say? I thought It was big and I was gonna struggle to fill it all in
The Train station idea was good. Would give the area some uniquenes to it I think. Thanks for giving me your honest opinion
Toggle signature
CK2 mod Author - Dynamic Cultural Titles (Ironman)

For being an old town (i.e. the part inside the walls), it is large, and the highway is very close. Maybe incorporate the highway into something might've been bastions earlier, if it is supposed to be so close.

The castle island is quite big in any case and feels oddly separated. Also compare the size of the university campus to the castle island.
Don't forget to think about the main train station(s). Those would be expected closer to the center than a highway.

Street grid is fine, keep in mind to add some squares here and there.
Reactions:

Hmm. Good ideas here, altough I have no idea how to incorperate a bastion kinda of like into the build. I took inspiration from Istanbul and Rome in that they have a main road (not really a highway I think) right beside the old defensive Walls. But maybe proper Highways like this one is a bit over the top so close?

Is the oldtown area in total a bit to large?

I actually really liked the big castle island (its seperated through a canal) (and its also from the map). University: I actually thought about only using a vanilla University or from the workshop and call it a day at that. But parhaps a bit boring? I quit to play "active" around when campus came around so haven't played around with it properly (also mainly because its not really my style? sounds like an excuse)
Toggle signature
CK2 mod Author - Dynamic Cultural Titles (Ironman)

Maybe its a alot from me to ask. But if you (any) had the chance to do whatever you wanted with the map, what would you do?