Menu
Install the app
You are using an out of date browser. It may not display this or other websites correctly.
You should upgrade or use an alternative browser.
Stellaris 42867 Bug Reports 23131 Suggestions 13077 Tech Support 2175 Multiplayer 326 User Mods 4131 Stellaris AAR (After Action Reports) Console edition 934
Show only dev responses

Can subsidiaries wage war on each others?
Toggle signature
Next Vicky III, please?

Frederic III said:
Can subsidiaries wage war on each others?
Click to expand...

While I realize it isn't the exact same thing as a megacorp or criminal empire, this "empire within an empire" seems like it could be an interesting fit for a kind of rebellion or counter culture. I'd love to play a "rebel alliance" establishing hideouts on the planets of the oppressive empires.

Two questions popped on my mind: Can we, as a megacorp, hire mercenaries? (money based states seems to use them a lot) and can we plunder ennemies' economicals routes (for an economical war mechanic)?
Last edited: Oct 25, 2018
Toggle signature
"It came to me when I tried to classify your species and I realized that you're not actually mammals. Every mammal on this planet instinctively develops a natural equilibrium with the surrounding environment but you humans do not. You move to an area and you multiply and multiply until every natural resource is consumed and the only way you can survive is to spread to another area. There is another organism on this planet that follows the same pattern. Do you know what it is? A virus. Human beings are a disease, a cancer of this planet. You're a plague and we are the cure."
Agent Smith

This is a lot more exciting than I was expecting.

I for one am very pleased with the direction Stellaris is going in.

(And even more excited for the potential of a future government update!)

When are you going to tell us about the slave market?

Why can't friendly gestalts benefit from Commercial Pacts? It seems like a gestalt should be smart enough to recognize that working with another empire commercially would be beneficial. It does make sense that things like Devouring Swarm still couldn't do it though. You should consider changing that so that gestalts who are friendly toward others can benefit from Pacts.

I like the idea of these merchant republic trade po.... I mean megacorp branch offices

I do have one request though, could at least one corporate civic be added that makes you a tech company? Like something that gives +1 research alternatives or something? I wanna be space apple/aperture.
Toggle signature
"Huh, why did I miss that in my first read?"

-My brain while re-reading dev diaries occasionally.
Although sometimes in Dutch.
But usually I am thinking in English while reading English text.
This whole part is unnecessary isn't it?
Eh, keeping it in anyway.
K

Wiz said:
as a low level of crime on the planet will both cut into the income of the Crime Syndicate and makes it possible for an event to fire where law enforcement shuts down the criminal Branch Office on the planet and blocks any further such offices from being built for a time.
Click to expand...

I am very happy to see this after watching the announcement stream v.o.d. and Blondie's extortion comment about "how much can I get other players to pay me not to put a crime Branch Office on there worlds". Knowing at least one of the people I play multiplayer with would take Criminal Heritage in a trolling/predatory manner. Other players would need a method of getting rid of the Criminal Branch Office when they could not hope to win a war against that player without calling my self or the other most experienced player to win the war for them.

I do have to ask is a lockout time (10 years?) for re-establishing "Criminal" Branch Offices on the planet that kicked them out? Because it seems like a problem if I win a war to remove the Branch Office only to find out it is being rebuilt on the first of the next month.

I would like to suggest that for the Criminal Branch Office a mechanic where they cost money if crime is below a certain threshold to give player who choose to role play Pacifist and Fanatic Pacifist a way to fightback making the Criminal Branch Office cost to much so the Crime Syndicate would choose to close it and move it to an easier target. Also if you do not have a way to get to the Crime Syndicate in a war thanks to every empire closing borders to you. Thanks Democratic Crusaders, Inward perfectionists, Authoritarian, or any xenophobe government that spawn next to me every game.

FelixG said:
Why can't friendly gestalts benefit from Commercial Pacts? It seems like a gestalt should be smart enough to recognize that working with another empire commercially would be beneficial. It does make sense that things like Devouring Swarm still couldn't do it though. You should consider changing that so that gestalts who are friendly toward others can benefit from Pacts.
Click to expand...

Gestalts don't generate trade value as they have no civilian economy.
Toggle signature
For every complex problem there is an answer that is clear, simple, and wrong.

Do empires with the shared burden civic get a CB on MegaCorps to stem the tide of capitalism?

Are there any special interactions planned between Megacorps and Marauders?

Super hyped about this!

One question though: lorewise, what do you consider to be the difference between MegaChurch and a religious oligarchy?
T

Lots of exciting ideas for mods/future expansions to play with here, too, with this 'building on other people's planets' concept, i.e establishing military bases on allies/vassals planets US-style.
Toggle signature
When you're crowded out by freedom's price and you take a shred of bad advice, the system knows but you're kept underground
When you can't afford a flight to Mars, when you were never born to touch the stars, the endless maze of concrete wears you down
Can you theorize our better lives where the grass is green on the other side? We'd compromise and find a way to thrive
If you're scared of being left behind, then you'd be so disturbed with dreams like mine, the realization that our world's alive

AlexanderBoesen said:
Super hyped about this!

One question though: lorewise, what do you consider to be the difference between MegaChurch and a religious oligarchy?
Click to expand...

MegaChurches are interstellar televangelist empires, basically.
Toggle signature
For every complex problem there is an answer that is clear, simple, and wrong. 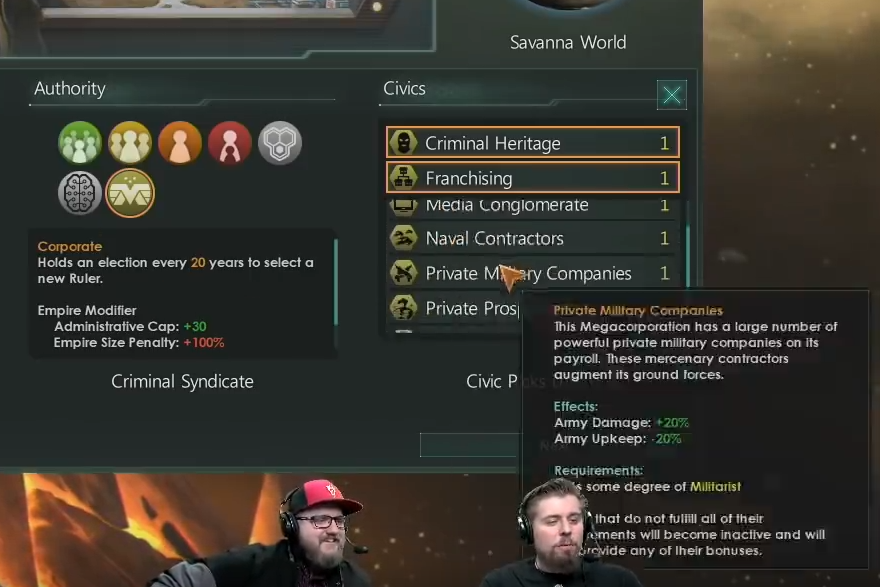 But it is a bit disappointing. It would be cool to have "corsair" mechanics or related mercenaries. Something like the volunteers of HOI4 or the blue suns of mass effect.
Toggle signature
Do not judge a message by its tone. Try to see the content and think that next time, it may be you who feel angry.

Will there be an equivalent to the Mechanist civic so megacorps can start with robots?