Menu
Install the app
You are using an out of date browser. It may not display this or other websites correctly.
You should upgrade or use an alternative browser.
Stellaris 43253 Bug Reports 23354 Suggestions 13319 Tech Support 2208 Multiplayer 330 User Mods 4154 Stellaris AAR (After Action Reports) Console edition 959
Previous Dev Diary Next Dev Diary
Show only dev responses

On this stellar day you will be able to read another of our dev diaries about the upcoming expansion - MegaCorp.

Like always I have to mention that we’re not yet ready to reveal when MegaCorp is due to being released, and that this article may contain placeholder art, interfaces and non-final numbers.

For this dev diary we will be exploring some of the new cool features in the MegaCorp expansion – namely Ecumenopolises and new Megastructures.

Ecumenopolis
“Thus shall we make a world of the city, and a city of the world”. 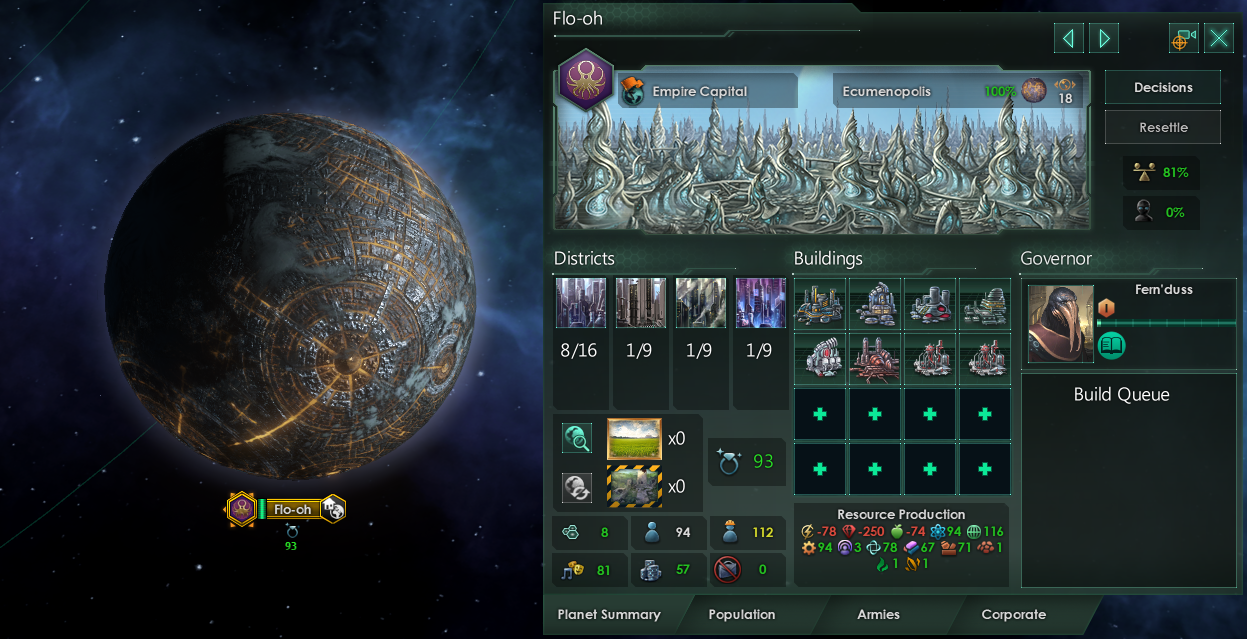 The city planet is here. To create a Ecumenopolis, you first need to unlock the associated Ascension Perk. The ascension perk is only available for non-gestalt empires, and requires the new Anti-Gravity Engineering technology.

Once you have the ascension perk, a decision will appear on your colonized planets. To be able to enact the decision, you need your planet to be entirely filled with only City Districts, in addition to the cost. 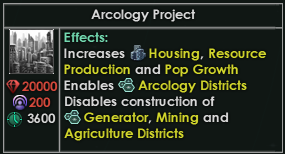 The Arcology Project is a must for anyone wishing to build a truly "tall" planet.

​
Megastructures have also received a balance pass to fit the new economy, and thus they now cost alloys to build instead of minerals.

The Matter Decompressor works similar to the dyson sphere, but using technology far too complex to try to explain here, it extracts minerals instead of energy. It has 4 levels which provide:
Minerals: 250/500/750/1000

The armored hull of the Strategic Coordination Center houses the cream of our military command, who devote their time to strategy and planning in this state-of-the-art facility. It has 3 levels and provide the following effects:
Naval Capacity: 75/150/225
Starbase Capacity: 5/10/15
Defense Platforms: 8/16/24
Sublight Speed: 5%/10%/15%

An artistic beacon on a stellar scale, this installation inspires and represents the spirit of its creators. The Mega Art Installation also has 3 levels, but with the following effects:
Unity: 100/200/300
Amenities: 5%/10%/15%

A meeting place for galactic powers, increasing immigration attraction and global opinion of us. The Interstellar Assembly has 4 levels with the following effects:
Immigration Pull: 25%/50%/75%/100%
Other empire's opinion: 10/20/30/50

Don’t forget to tune in today to our Twitch stream at 15:00 CET for the Stellaris dev clash. The campaign will begin its second session, and you would not want to miss it!

That's all for this week, folks. Come back next week when we will be talking about The Caravaneers.

Can't beat the feeling of building a megastructure just to feed your rampant consumer good industry.

Will here be any update to Machine Worlds? Ecumenopolis looks pretty much like a Machine World for non gestalt empires. Also will organic hive mind get something similar?
Toggle signature
Khanate of Bukkhara on the eve of new 1936 year

DmUa said:
Will here be any update to Machine Worlds? Ecumenopolis looks pretty much like a Machine World for non gestalt empires. Also will organic hive mind get something similar?
Click to expand...

Yes, machine worlds have new mechanics in 2.2. Hive Minds may get some sort of hive world, not yet decided.
Toggle signature
For every complex problem there is an answer that is clear, simple, and wrong.

Will the new megastructures used energy per month similar to the science nexus and sentry array?

If Megastructures still can't be upgraded/built more than one at the same time. It will take centuries to build/upgrade them all
Toggle signature
The sole developer who is responsible for the modern-day open-world supernatural RPG called [NEOLITHIC] on Steam.
Can you find this secret game?

The hype train is reaching dangerous speeds! The emergency brake broke off! There's no stopping it!

7th!
Toggle signature
What do you call the dog of a spanish conqueror?
A Conquistadoggo!

Is there a cap on how many Matter Decompressors you can have?

Most Recent: Forever Golden
Most Proud of: This is Persia!

All your stars are belong to us

I'm looking forward to building all of these in my march to corporate dominion!

As an aside, will there be a map mode tailored to corporations, allowing them to see the spread of their influence via branch offices? (I want to fight an "underground" war against other corporations, and see how that is progressing, without caring about petty things like whose flag flies over the planetary capitol)
Toggle signature
Mobile doesn't show signatures. In a month's time I'll have forgotten I set this.

Can't help but think the "Interstellar Assembly" (aka babylon project?) will have more significance when they do the inevitable diplomacy expansion.
Reactions:

klingonadmiral said:
Is there a cap on how many Matter Decompressors you can have?

Ecumenopolis is perfect habitability, much like gaia/habitat.
Toggle signature
For every complex problem there is an answer that is clear, simple, and wrong.

I like the Master Decompressor model. It looks scary in its own right. Next to resource production, the Coordination Center sounds the most useful.

I love the idea of the Ecumenopolis! Not only will it make playing tall that much more viable but it will finally make sense to have specialized farming worlds. Also, the new megastructures sound awesome.

I'm looking forward to the update!

In a word, Neat. But it seems a shame gestalts can't create a Ecumenopolis in my view.

Suppose all we can hope is that for robots, machine world has a interesting effect in 2.2

The defense platforms from the Strategic Coordination Center - is that for the Mega-Structure itself, or a buff to the platform cap for all starbases?

Do the megastructures change based on your shipset? The strategic megastructure there looks very much like mammalian shipset.
Toggle signature
Team Member on Warhammer: Geheimnisnacht
CK2Plus Factions Standalone Mod [Forum, Steam]
F