Standing at a proportionate 5'7 feet, hair neatly tied in a bun and taking graceful steps in her crisp office suite and formal skirt, Abbey Williams was the very embodiment of the perfect American working woman. She served as secretary for James Long, a human rights activist and speaker who travelled across the OFN(Organization of free nations) world for the cause of global human rights.

Presently Abbey click clocked her high heeled legs across the long corridor going towards the concert hall where her employer was about to give an important speech on account of 'International human rights day'. In her hands were the documents that would be detrimental to Mr.Long's performance. Generally always prepared much before time, a last minute mix up had resulted in Abbey running back to the office to get the documents a mere few minutes before the speech was about to begin. Being late wasn't an option so she paused for the briefest of moments to look at her designer red diamond encrusted office watch, the specialty of a luxury Frisco brand. The clock showed that she was barely on time, not ideal for an employer of Mr.Long's status. So she hurried her steps and started speed walking towards the concert hall.

Thousands of miles away across the ocean, Habsan paused his digging for a second and looked startled as he heard his brother loudly wail before slumping to the ground like a dead weight, probably from overexhaustion. The man was unconscious. Habsan wished he could reach out to help but his chains prevented him from going near his brother. So Habsan shouted for help. His fellow miners looked at his brother concerningly but dared not stop lest the German workmaster whip their hides. Finally after several minutes, Habsan managed to catch the attention of the workmaster himself, a scary man dressed in black and holding an evil whip in his hand which he swinged mercilessly towards any slave he found to be 'lazing' or 'lagging'. The workmaster's first reaction was of anger. To him one collapsed worker meant one liability to explain to his own superiors and liabilities were not tolerated at all in Herr Huttig's regime. So the workmaster first tried to wake up Habsan's brother by slapping his cheeks and kicking his knees. When that didn't work he finally sighed and went outside. A few minutes later he returned with two hefty Germans who picked up Habsan's brother. For the briefest of moments Habsan watched as they took his brother out the mineshaft before the workmaster threatened to whip him if he stopped. Half-heartedly Habsan raised the pickaxe over his head and continued slaving away. He knew that while he slept for his designated 3 hours tonight, his brother would not get that luxury and would have to dig up the 'Midnight diamonds' to make up for his collapsing time. Habsan didn't know what happened to the diamonds after they left the mine in the huge Volkswagen supply trucks and he didn't care.

Had Habsan cared, he may have known that the trucks would make their way to different ports all across the OstAfrikan coast from where they would be loaded into huge ships. The ships would then travel across the ocean to Europe. Most would go on to German ports but some would also go to the ports of Brittany from where they would further be shipped to OFN nations across the globe. Some ships would travel to American ports like Long island, Miami and San Francisco. From there, the diamonds would go to the workshops of luxury brands where they would be carefully cut by sharp men sitting in air conditioned offices and then the stones would be adorned upon jewellery, clothing and watches along with exorbiant price tags so that people like Abbey Williams and Mr.Long would never be late! 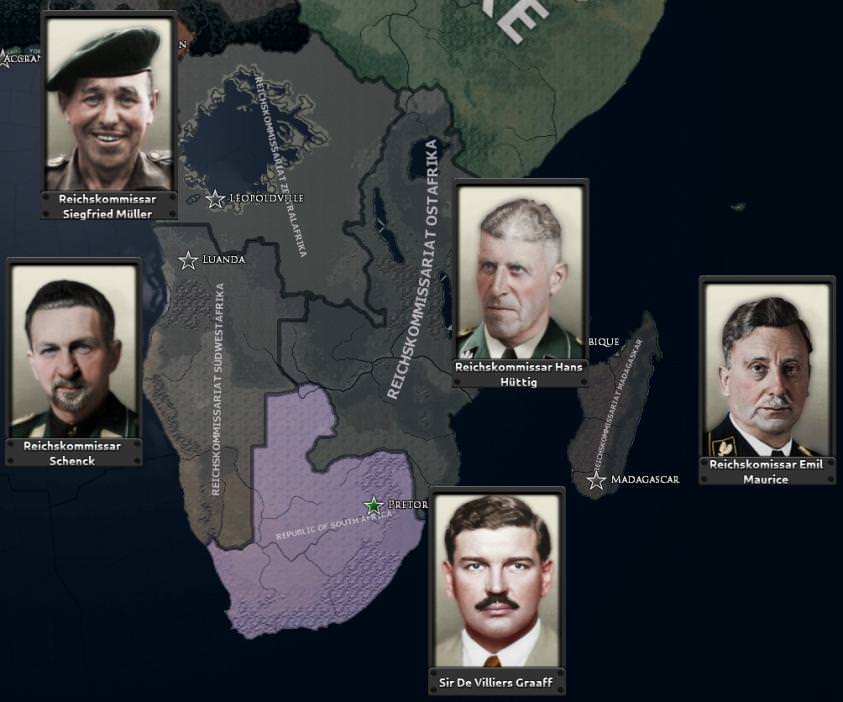 Expand signature
Jihad on the Savannah : A Historical Sokoto AAR in Victoria 2
Check out the Kaiserreich random generator

Please comment. Comments give me an insight into whether my work is going good or not.
Thanks!
Expand signature
Jihad on the Savannah : A Historical Sokoto AAR in Victoria 2
Check out the Kaiserreich random generator

Will try to follow
Expand signature
To view is human, to comment is divine.
"Be not afraid" - John Paul II
"The Christian way has not been tried and found wanting, it has been found to be hard and left untried" - GK Chesterton.
Current AAR: The Thorn of the Rose HoI4 The Future of the Red Lion Stellaris (on hold) Journal of the Silver Daggers Battletech
Completed AAR: In Memory of France EU2 Pax Humanitas Stellaris 1.4.1 A VictoriAARn Education Victoria II 3.2
The Great Trial Stellaris 1.9.1A Game for Lisan: Belgium EU4 1.25 Account of RCAF Bomber Command HoI4
Other AAR: Entering the First Court - Kanem Bornu EU4 1.22
View my full AAR list at The Inkwell Red Special Cookie ●
This line is necessary since the forum re-work to enable the links in the last line to be used.

The tension is killing me! (Not so much for Burgundy)
Expand signature
“Hail to the Chief, as we pledge cooperation
In proud fulfillment of a great, noble call.”
A Fair Deal For America: A Kaiserreich AAR A BoredStudent1414 AAR

Oh, what silly men! Two Americans, yet both are different in style. One is a glorious revolutionary writer, hailing from a small town or perhaps the bowels of the hoi polloi, a miserable excuse for a scholarship, and bellowing revolution and belittling the ignorant superstitious papists and Europeans. Another is perhaps not as serious as the former, for he has a mixed record, an obsession for the strong, liberty-guiding Anglo-Saxons, and he is not different in mocking the silly, uncultured Frogs.
An amateur's attempt at writing in the vein of Sybil.