Menu
Install the app
You are using an out of date browser. It may not display this or other websites correctly.
You should upgrade or use an alternative browser.
Europa Universalis IV 74897 EUIV: Suggestions 15832 EUIV: Technical Support 5598 EUIV: FAQ & Strategy Guides 179 EUIV: AAR's, Let's Plays, and Fan Fiction EU IV: Alternate History Short Story Contest Contr 26

Good day all and welcome to a new development diary for EU4. We have by now covered most all of the gameplay content and features coming with Golden Century and the 1.28 Spain Update. Today, let's get to some of the eye candy.

As Golden Century is an Immersion Pack, that means it comes with new unit models built-in. It also contains new music focused on Spain and the New World.

First, let's check out the Units. While the majors in the region already enjoy their own unit models, we reached out to those who have long deserved their own and have added infantry models for Granada, Navarra, Galicia/Leon and Salé. Each get 4 different models, one for each Tier of unit as warfare evolves with the integration of the firearm.

Granada will do well to see themselves into the era where they can use firearms, but at least they'll look dapper until then.

Navarra may have lost her coast, but she gained a good mesh of functional and elegant gear. 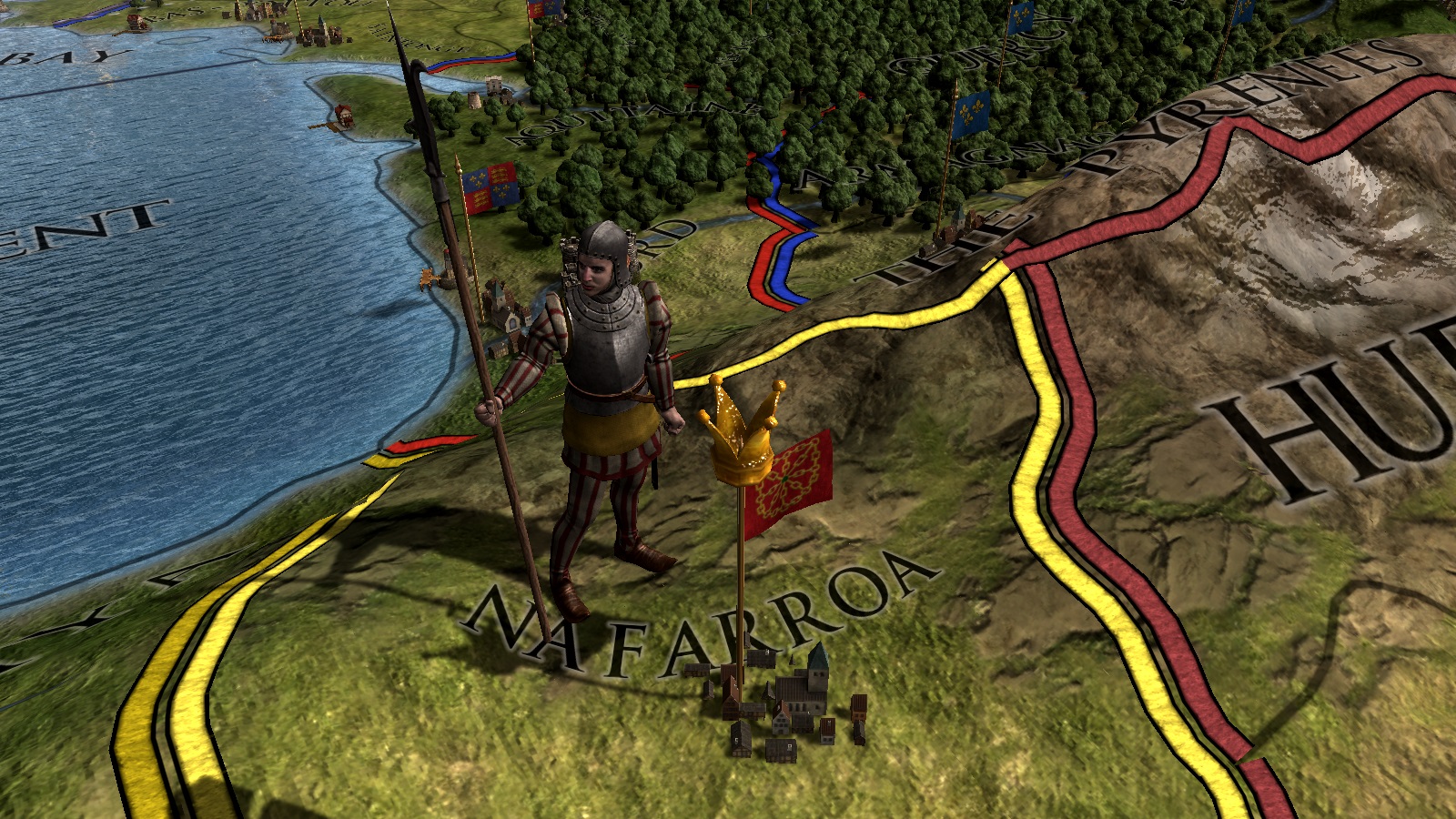 Leon and Galicia, the releasable nations from Castile, both share their unit models, but keep a distinct look from their Castilian brothers. 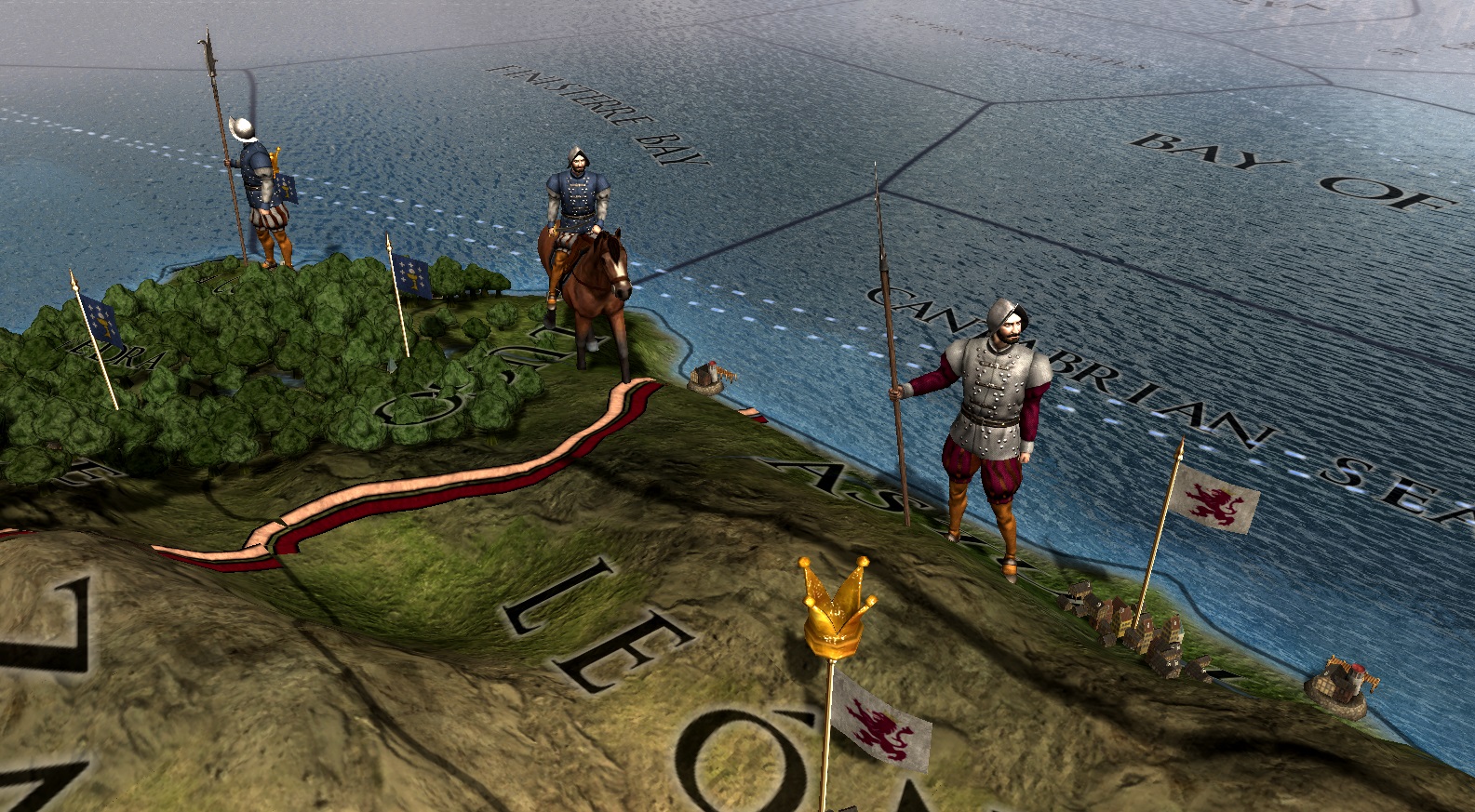 Salé, the potential pirate nation of the Maghreb, already look like they are up to no good, and appear to have already plundered rifles. 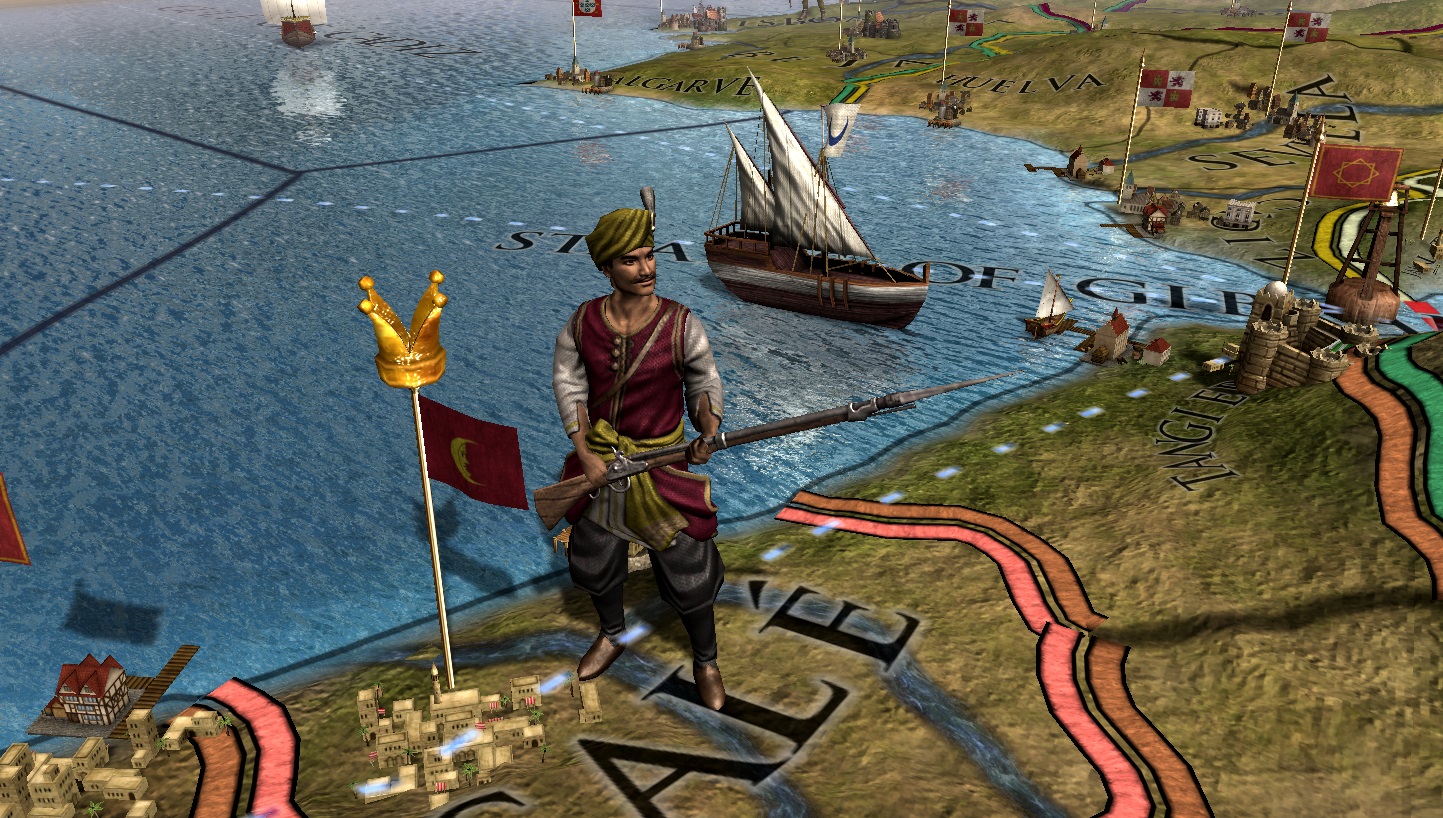 Now the plan was to make 5 different unit packs and have Andalucia as our 5th set. As we were concepting these designs though, we felt there was too much overspill between Granada and Andalucia model designs. As such, we decided that Granada and Andalucia would share their models, and we would still make a 5th set of models, but for our new additions in the Caribbean. 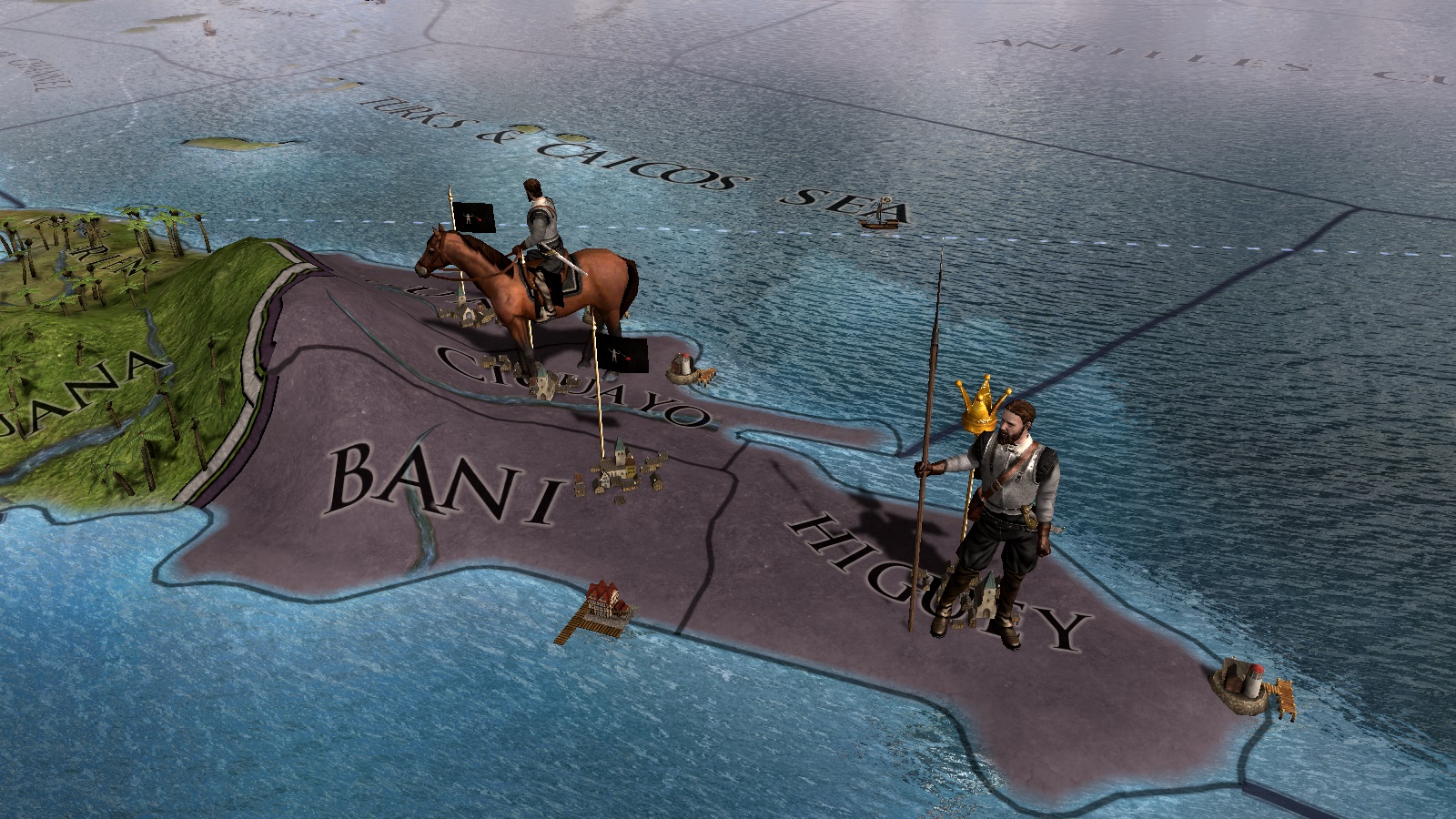 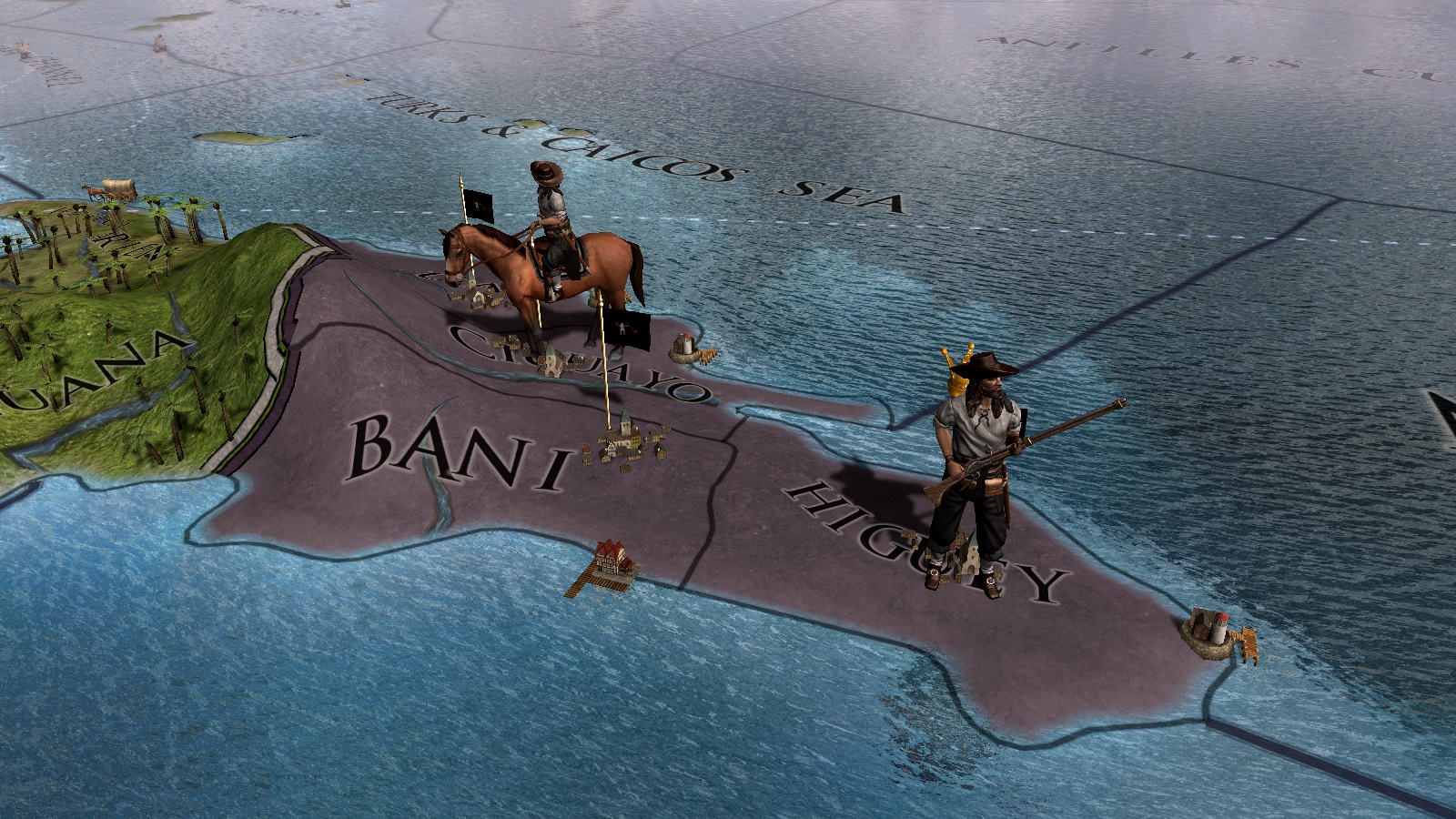 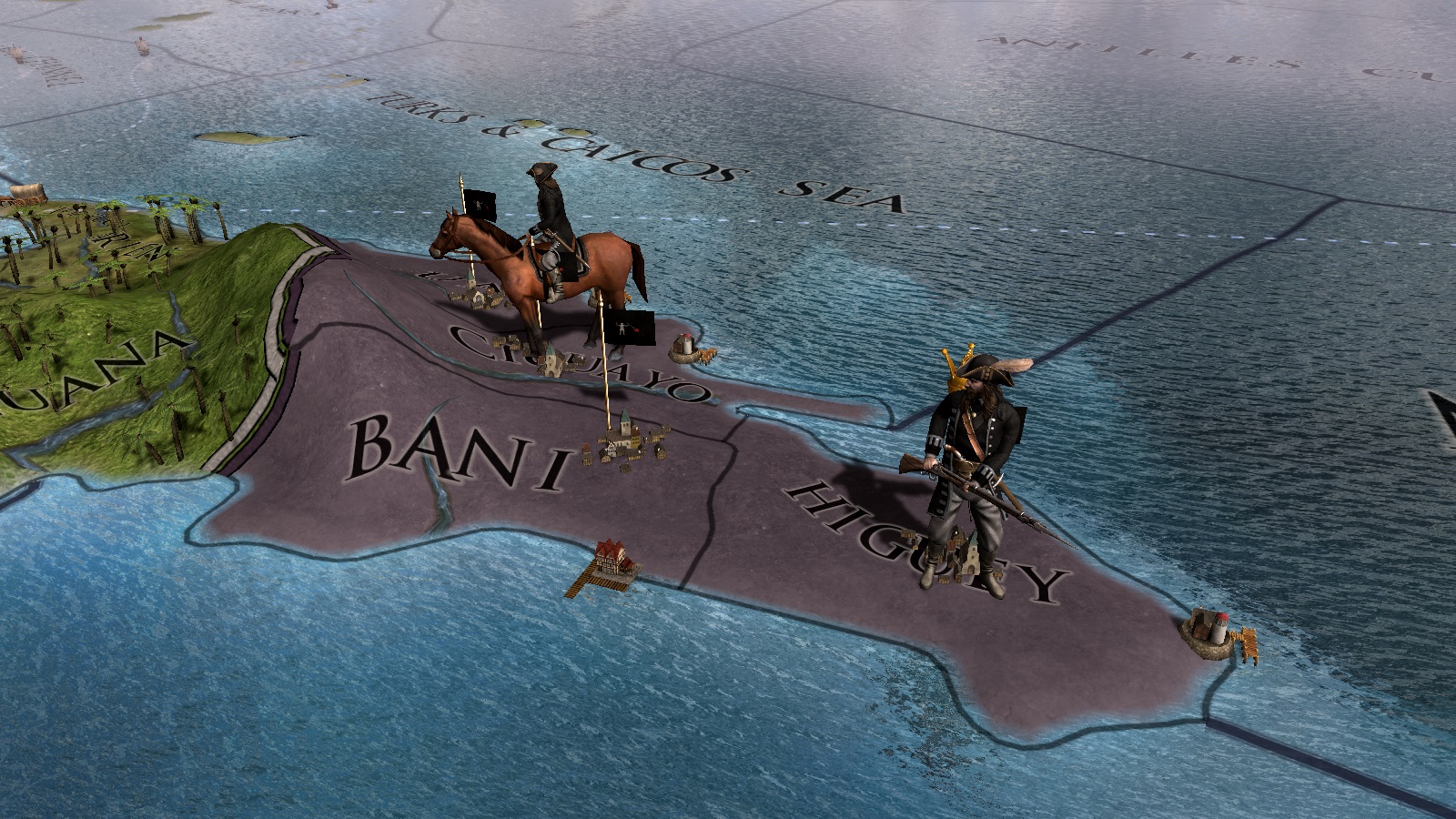 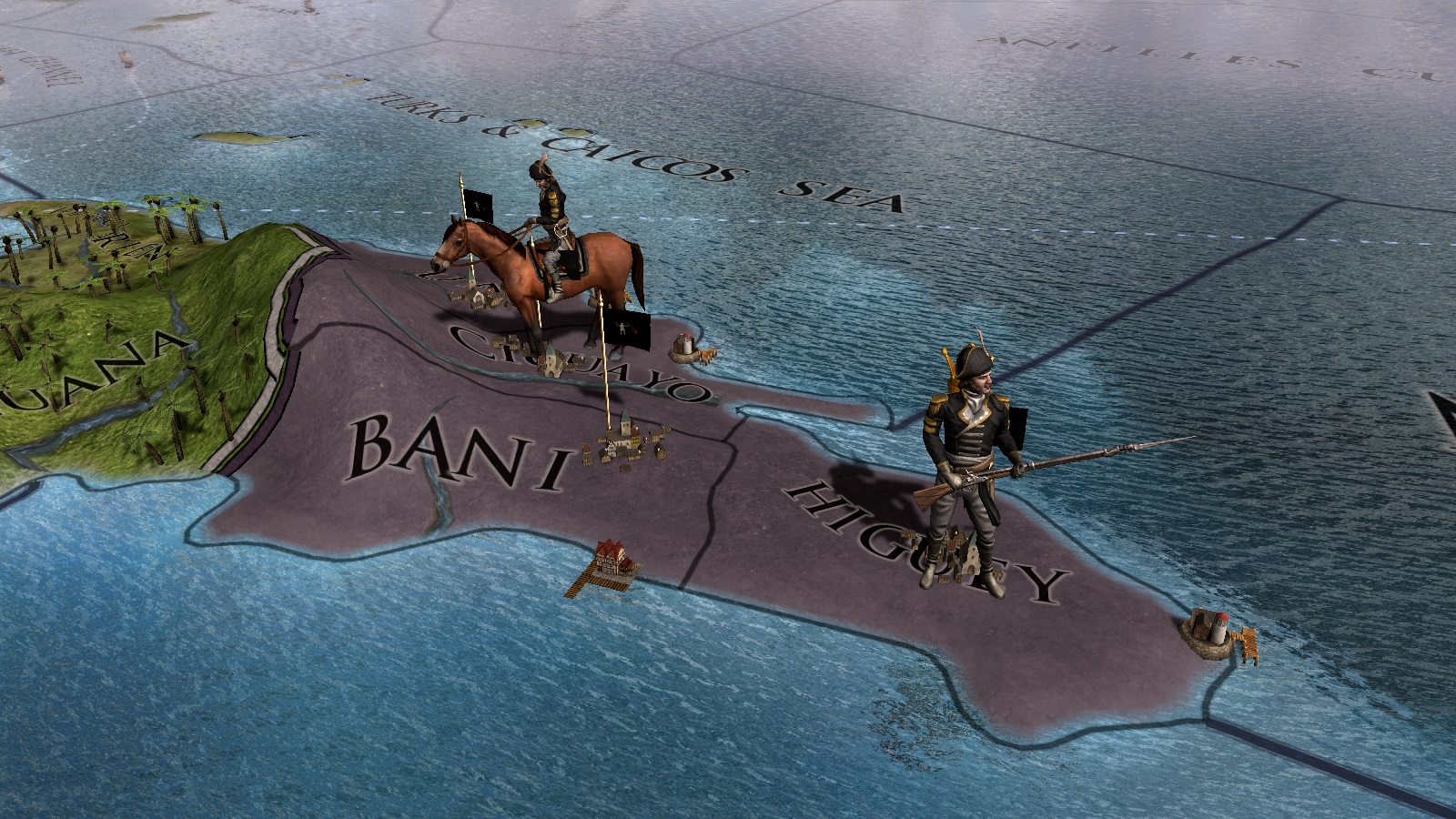 Caribbean Pirates themselves have received new unit models, evolving through the ages and, while we resisted the call of Hollywood designs, keeping to a more fitting, if threatening look.

Although the addition of unit models in Golden Century is not limited to the units on land, we have also given the Iberians, as well as the Berbers, their own Ship Designs. These extend to all 17 different unit models seen in the game.

Let's use the heavy ships as an example, for the Iberians they will get new ship looks from the smallest of Carracks 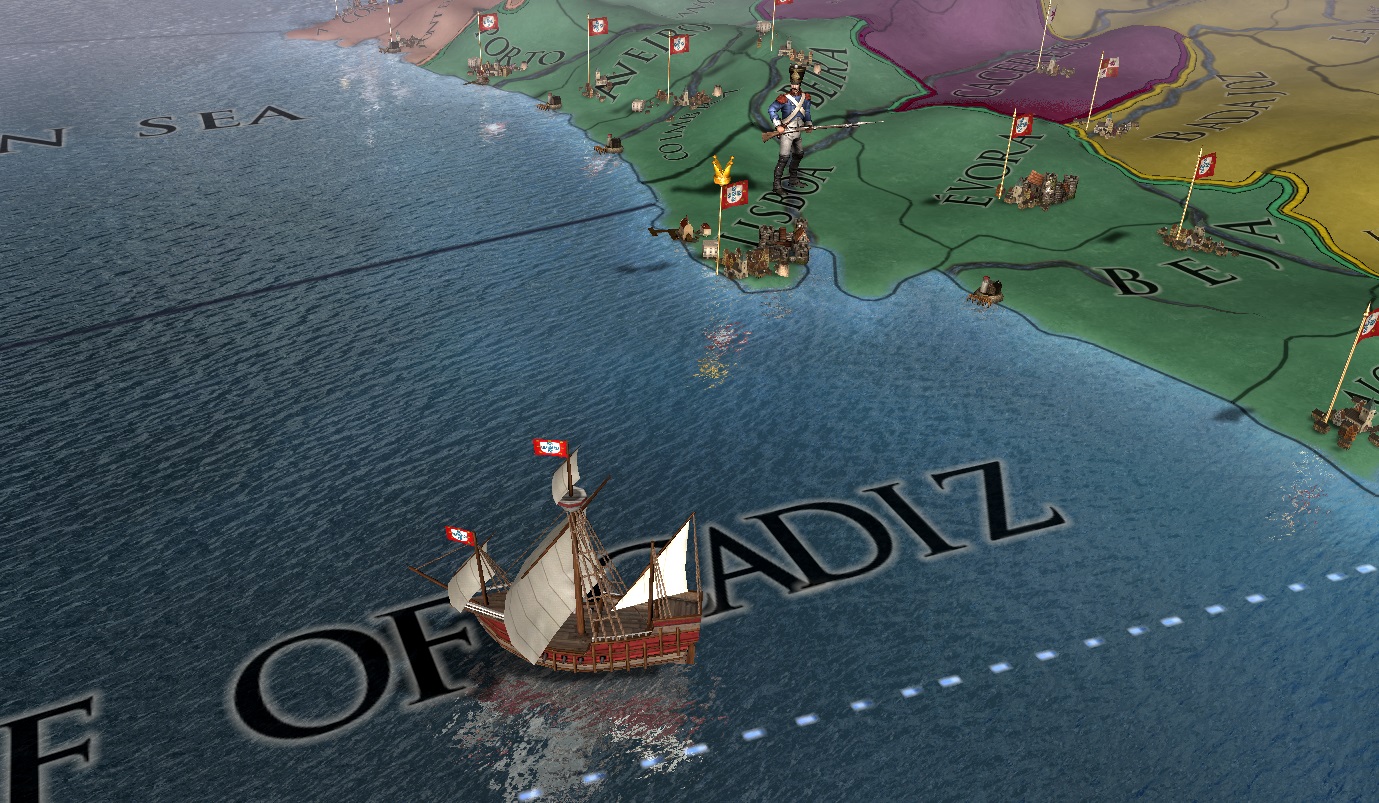 To the mightiest of threedeckers. 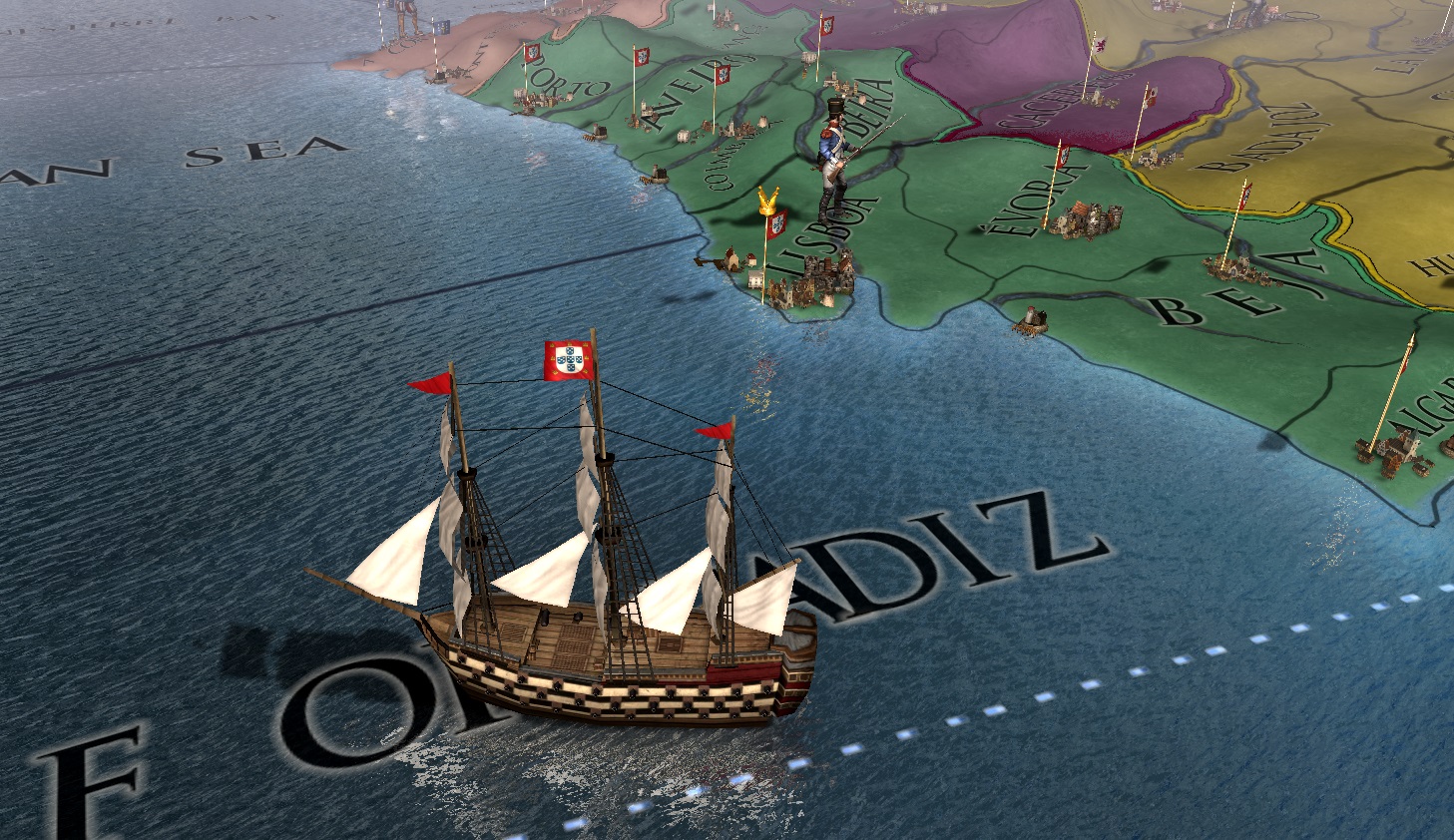 Similar story for the Berbers. 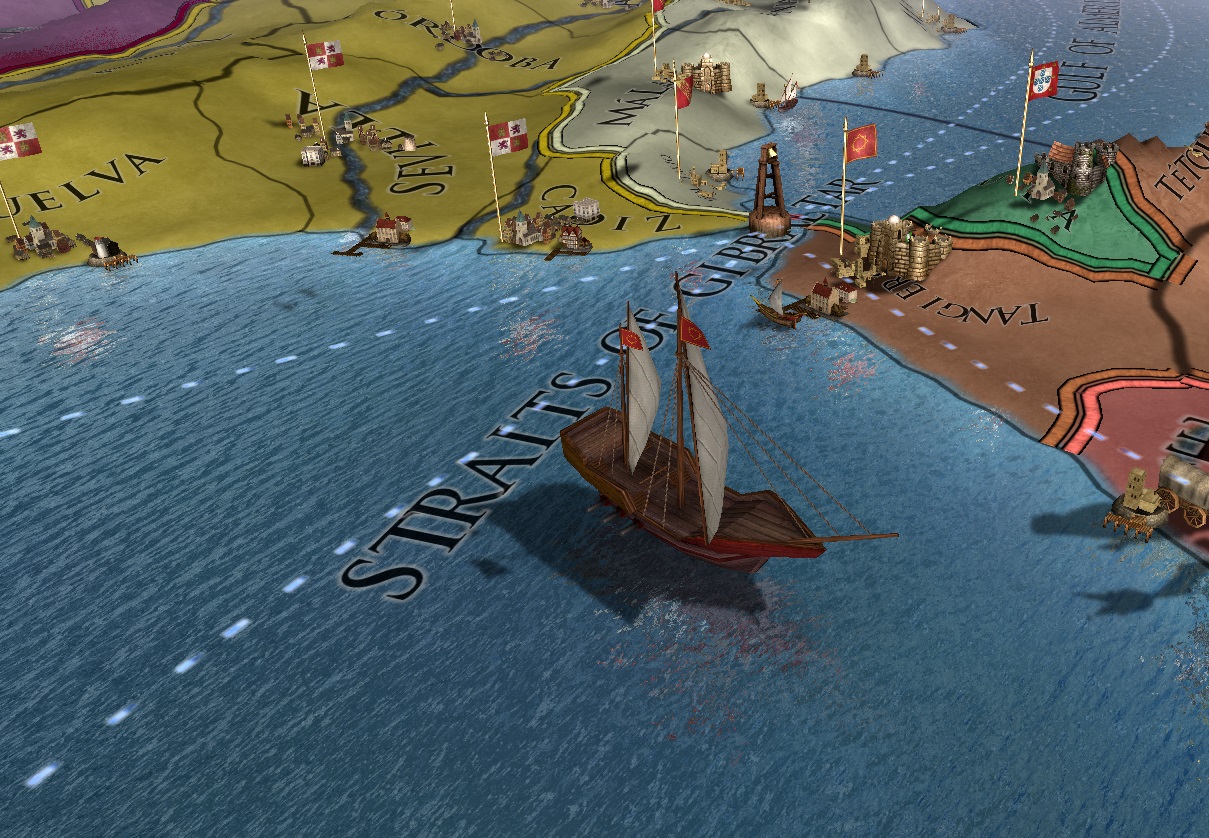 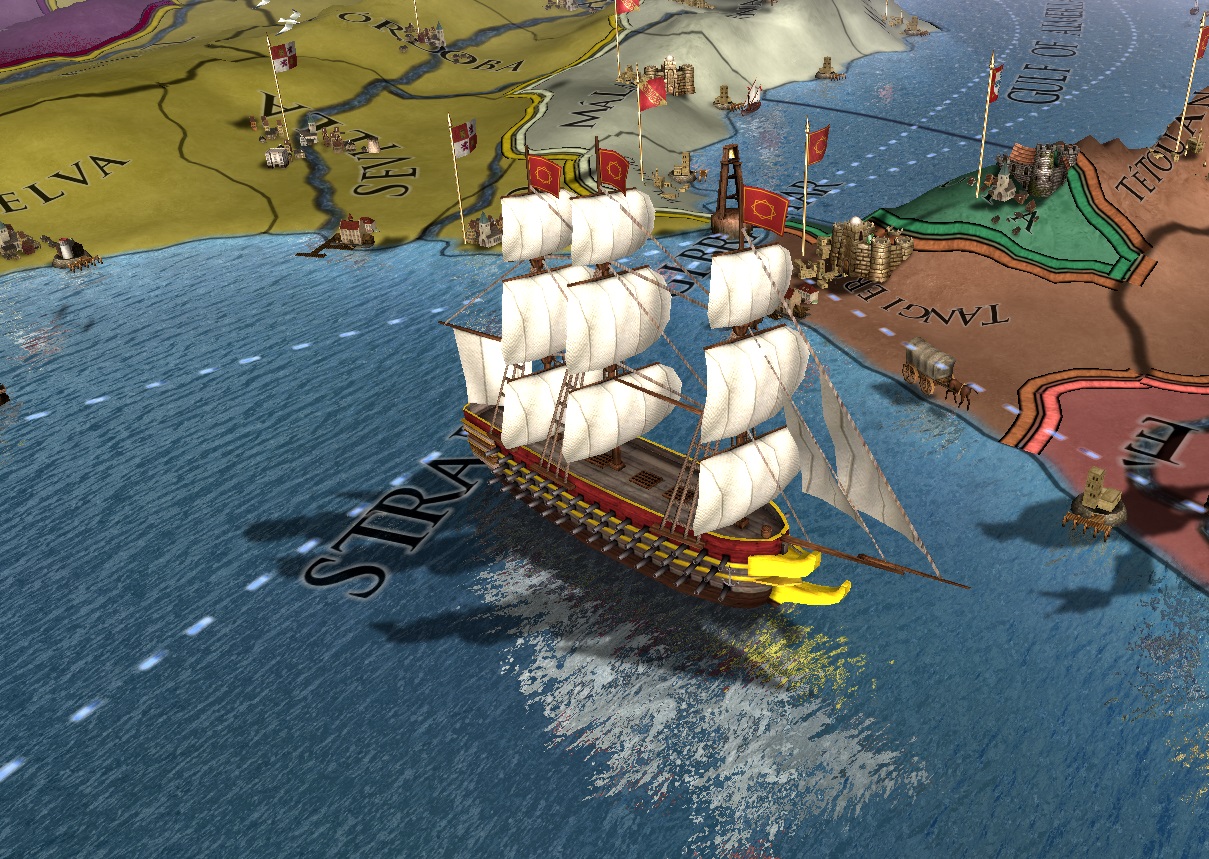 As a final note, there will be three pretty sweet music tracks added with Golden Century. Sadly I cannot share these in all their glory right now, but we do have a preview of one of the tracks which was played during our First Look stream of Golden Century last week. Check it out here:

That's our lot for today. We'll be back next week to shed light on the ten new Achievements which will be added in 1.28 Spain.

When can we see the other tiers for Granada, Navarra, Galicia, Leon and Salè?
Toggle signature
HABEMVS PAPAM: my overhaul of the Papal States and Christianity, and much more!
GENOA: new government mechanics and an historical approach on loans
VENICE: why the Serenissima deserves more
Forgotten Italy - the fractured land

You will at some point, but not for the dev diary, they're not done yet
Toggle signature
That'd be Groogy. He's kinda like the King Joffrey of these forums, toying with us for his own sick amusement. - DominusNovus
The Groogy is an elusive and magical creature. You do not find the Groogy, the Groogy finds you. - Enlil
I thought he was just created in a lab - Viking

DDRJake said:
First, let's check out the Units. While the majors in the region already enjoy their own unit models,
Click to expand...

Wait so this means people who do not already own new unit models for the major powers in Iberia won't get unit models for them? I mean we are forced to pay for unit models when we want content and all we get are models that will hardly be seen as those nations die faster than you can look? Or will the existing major power unit model be unlocked by the DLC?
Toggle signature
My Stellaris Mods:

Is Asturias still releasable? That picture of Leon having armies there makes me think not

Can you explain to me why this DLC is followed by the word Spain?
P

Looks like the last week of development will be intense. Good luck guys.

who would pay money for this ?
this seems like 3 mini mods bashed together

BUT, Do Flagships or Capital Ships ( I forget the name sorry) have their own Unit Model?
Toggle signature
Ich bin DerKeijzer!

Nuajan said:
Very good, many new units, but ... and events?
Click to expand...

They already spoke about events, check the Stream in YouTube thats linked above in this DD, they show some events there.
Toggle signature
Ich bin DerKeijzer!
M

Sadly, this feels like the best part of the DLC.
Toggle signature
Sit now there, and look out upon the lands where evil and despair shall come to those whom thou allied. Thou hast dared to mock me, and to question the power of France, master of the fates of Europe. Therefore with my explorers thou shalt see, and with my spies thou shalt hear; and never shall thou be released from vassalage until all is fulfilled unto its bitter end.

Is posible to see Spain Mission Tree with the new missions pictures?

Allow pirate countries to recruit additional army from the number of sailors or allow them to gain manpower from sailors (convert sailors to manpower and vice versa, maybe not 1:1) no?
Toggle signature
EU4 ads be like:
Is your PHOENIX purple, itchy? Try out our new ointment "OTTOMANS", the best purple PHOENIX removal for ONLY $2.99.
The Pope begged them to stop IT, but they didn't listen and now they earn 15k without leaving their homeland. Learn how!!!
Habsburgs hate HIM!!! Learn one simple trick and enlarge IT by 20 in just one night!!! Lonely burgundian queens in your neighboorhood await!!!

Is it just me or are the Galician and Leonese unit models actually the SAME model with different colors?
Toggle signature
HABEMVS PAPAM: my overhaul of the Papal States and Christianity, and much more!
GENOA: new government mechanics and an historical approach on loans
VENICE: why the Serenissima deserves more
Forgotten Italy - the fractured land

The Havoc said:
Most disappointing DLC in EU4's history
Click to expand...