Jesus was a communist

StefanFan said:
I don't understand why simple tweaks that are easy to do aren't added into these bug fixing patches. Some of the bugs Question mentioned are easy to fix, the diplomacy macro can be reverted to 1.29 when it worked fine. It's mind boggling what kind of management PDX can have, cause it's not the peons' fault, it's always the management.
Click to expand...

They got the money from the DLC sales, why would they care about fixing a product you already brought and can't refund.
Reactions:

Jesus was a communist said:
They got the money from the DLC sales, why would they care about fixing a product you already brought and can't refund.
Click to expand...

Nonsense. Hardly any company this size cares more about its customers than Paradox does.

I too would prefer that Paradox did certain things differently, but it is obvious that they care.
Reactions:

They don't. One of the devs said, when I displayed a bug that was simple to solve, that being simple to solve it doesn't mean it was going to be a part of the next patch. And that it's utter bs, why won't you fix 20 more simple things in 1-2 hours of work? Unless you either a. have no idea what to do, because devs are shared between games, and they totally forget what they did 3 months ago, or b. they purely don't care. (a.) also means that they don't really care about the customers and they just milk the cow as much as they can.

If you don't have a dedicated team you can't even fix the simple things quick because it takes time first to figure out what you or somebody else did. I know, cause I also do projects (smaller of course) for my clients, and when some client after 6 months needs something more, it takes more to figure out things even if I used a masterplan for the project, than to do the things required.
Expand signature
My middle name is Trollollolo! - Simplified Forum May 2020 - Hide owned games icons and signatures and customize the forum looks.​
Reactions:

Question said:
If you mean the mod that disbands AI mercenaries, I was the one who modded it. Someone else also added it into their "better AI" mod on steam.
Click to expand...

Thank you kindly!
A

There are a lot of things you need to fix. One among the other is... pagan take the -80 opinion modifier from hars council of trente towards heretics. Not good.
Reactions:

Lys91 said:
I guess they have started working on EU5 at this point. I think the game has too much technical debt to fix it in any meaningful way.
Click to expand...

The tech system is still the same one we've had in the beginning. The monarch power issues that arise when the AI just gets free 6/6/6 and you can't even exploit a tech gap (because they're always drilling for free) the fact that AI just base races you every war, inability to even request vassal troops (Hoi4 has this easily, why is this not in eu4 already???)

One more thing. Lucky nation. Remove it. It does not add challenge. It does not add fun. Ironman games are already RNG heavy enough, why allow further RNG with ai weighted results to ruin a game? Who enjoys restarting until they get an optimal setup? At this point, I'd welcome EU5
Reactions:
J

Jesus was a communist

It's now been over 16 WEEKS since release and 1.30 is still riddled with bugs. Any other game dev would have dealt with it by now or at least offer an apology
Reactions:
F

I'm playing a relaxing normal France game. Started it in 1.30.4. I am allied with Castille since day 1. They inherit Aragon. They never loose a single war. I helped them having Marroco land. They did not participate to the thirty years holy war. I killed Portugal so they have almost no competition in colonasing south america.
It's 1600 and they have more than 11k debt.... Yes, it's fixed... 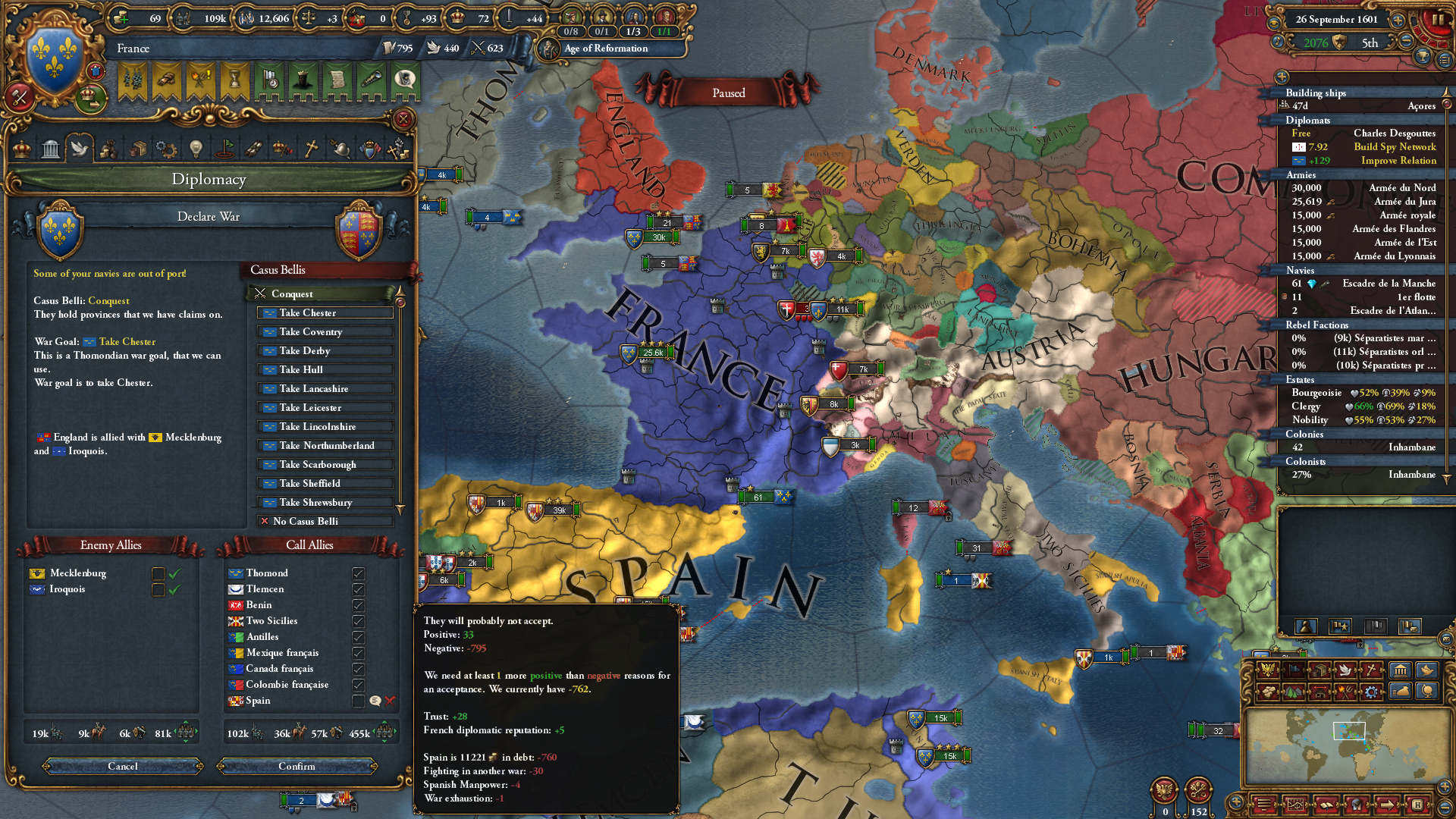 The ai is clearly still messed up. I just got attacked in my game and ALL my allies refused to join. If you cant figure out how to make the ai manage its economy better at least reduce or remove the deficit malus for joining defensive wars. I can live with allies not joining offensive wars but suddenly losing all your allies when attacked is gamebreaking.

This is REALLY easy to solve. All you have to do is mod the buildings file to make the AI build temples, workshops and manufactories.

I really dont understand why Paradox doesnt do it.
Reactions:

I will just leave it be 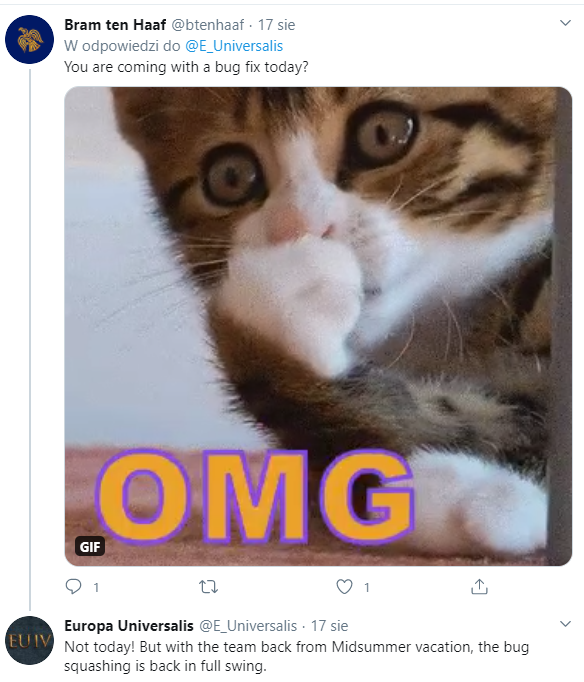 ... was a Communist said:
It's now been over 16 WEEKS since release and 1.30 is still riddled with bugs. Any other game dev would have dealt with it by now or at least offer an apology
Click to expand...

They let DDRJake leave. That was probably a mistake, but certain players must share responsibility for the mistake, since those players were the ones who unwisely demanded the mistake.

DDRJake was excellent. It's nothing against the current director, but the notion that the game would be better managed without DDRJake's direction was always doubtful. DDRJake is gone, now, and now players don't like the results. Unfortunate.
Reactions:
G

That's the only thing we can do. Don't buy their products until it's fixed.

That's the only thing we can do. Don't buy their products until it's fixed.

During my Papal/Kingdom of God game, I've just found another glitch/bug: when you are trying to appoint cardinal being not in the control of the Curia, the sound of clicking glitches up until you close the menu.
Expand signature
https://forum.paradoxplaza.com/forum/index.php?threads/streltsy-disasters.1104950/ - my suggestion of unique disaster for Russia and nations with primary culture of East Slavic culture group

I was really hopping this patch would fix 1.30 since they had a nice long break after last DLC, guess I was a fool.
Reactions:

Hahaha Paradox doesn't give a single solitary shit about it's customers. They charge crazy amounts of money for DLC that is almost always broken so that we can QA test it for them and they can then try to fix those bugs, if they feel like it. They release steaming garbage alphas like Imperator and HOI4 as full games so that we can test them for $50 a piece and they can consider our advice on them, if they feel like it, Imperator is still greatly lacking in all departments. I will say they at least seem to allow criticism more than most companies, but that seems to be because they just ignore it for the most part, it rarely seems to get taken to heart. Let's face it, if there were another studio was even close to making the types of games Paradox does, Paradox would be out of business very quickly.
Reactions:

Oh god the more i read the thread the worse it gets. So they fixed everything we asked them since 3 months in last patch, except they dont...
Glad i only spent 1 euro on gamepass for CK3, they wont get more from me.
Reactions:

Glad I stumbled upon this thread. Was about to buy some EU4 DLC but not anymore. Get it together, Paradox.
Reactions:

Rounoush said:
Glad I stumbled upon this thread. Was about to buy some EU4 DLC but not anymore. Get it together, Paradox.
Click to expand...

If Paradox did not care about its customers, then why would they let @Rounoush's comment remain in view on Paradox's own discussion board?

They do read the boards and they do censor comments (I should know), but not comments like that.

Give Paradox some credit. You don't have to like their games (though I do), but making and maintaining these games cannot be as easy as it looks. Sometimes bugs that look trivial to fix (a) aren't, or (b) are not believed by the developers to be bugs.

Paradox lets one play an old version if one is dissatisfied with the new. This is a concession on their part.