Menu
Install the app
You are using an out of date browser. It may not display this or other websites correctly.
You should upgrade or use an alternative browser.
Stellaris 43508 Bug Reports 23472 Suggestions 13522 Tech Support 2233 Multiplayer 335 User Mods 4174 Stellaris AAR (After Action Reports) Console edition 977
Previous Dev Diary Next Dev Diary
Show only dev responses

Our operatives have provided information on the activities of the vile Paradoxians. Despite their attempts at secrecy, we have managed to acquire some intel. The images our agents have taken appear to be of crude prototypes that they are still refining, but we thought it best to pass this dispatch along now so you can better prepare for the future.

In Dev Diaries 193 and 194 we explored the mysteries of first contact, hidden information, and intelligence gathering through diplomatic means.

It may come as a surprise to many, but sadly there are starfaring civilizations out there with whom peaceful co-existence and mutually beneficial diplomatic ties are simply not an option. Against these threats, it may prove useful to utilize the more intrigue-oriented members of your society, and turn to espionage.

Espionage and covert operations are a frequently requested feature that seem to be natural extensions of the intel system that we’ve described in the recent dev diaries. With the obfuscation of knowledge, naturally there should be systems to acquire that information.

Envoys will have a new diplomatic task available to them called Build Spy Network. They will take their place as the Spymaster of a network of covert operatives and agents that they will grow in power over time. Needless to say, the other empire will not be informed of your envoy's new position. 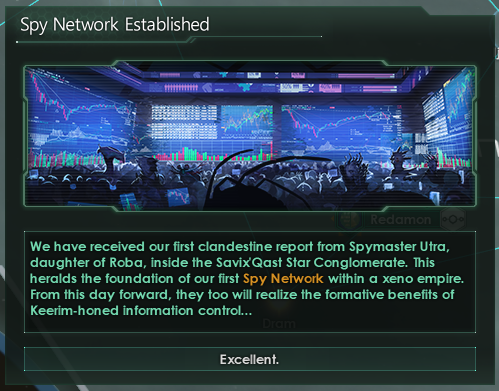 While an envoy is managing a Spy Network as Spymaster, the Network will grow over time - quickly at first, but slower as the Network gains in strength. Networks are far faster to build in large, sprawling empires, and if the target empire’s Encryption rating is much stronger than the spying empire’s Decryption, growth may also slow to a crawl. (Machine Intelligences have a natural knack for Encryption and Decryption, while Hives and psionic empires tend to excel at Counter Espionage.)

Unmanaged Spy Networks (those without an envoy directing them) pause all ongoing activities and rapidly decay.

Spy Networks initially cap out at a maximum level of 50. Several things such as civics or edicts can increase it, and if you have acquired (disposable) Assets within the target empire they also provide a boost - each Asset increases the Spy Network cap in that empire by 5.

Assets are useful pawns, hacked backdoors, deviant drones, or other resources that could come in useful to your Spy Network. An Asset could be a disgruntled Bureaucrat that's been passed over promotion one too many times, a faulty Pheromone Emitter that your operatives have found a way to manipulate, or even a Logistics System that you've hacked into. More details about the acquisition of Assets and their uses will be in a future diary.

Here’s a non-comprehensive sample of some civics, ascension perks, and edicts that have been updated during this espionage pass. Several new Encryption and Decryption related technologies have also been added. (Numbers are still subject to change!) 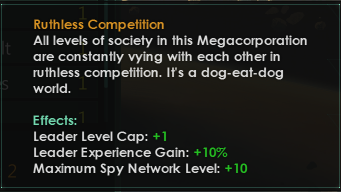 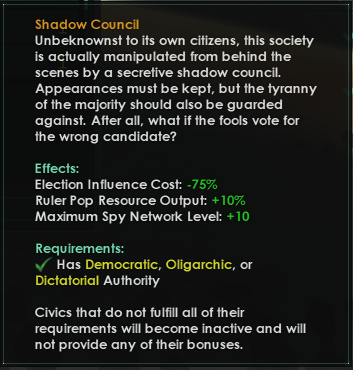 Some civics lend themselves nicely to covert activities. 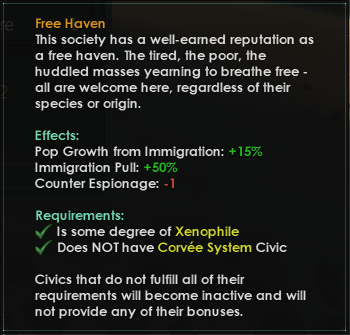 Others can modify Counter Espionage, making the lives of enemy Spy Networks easier or more difficult. 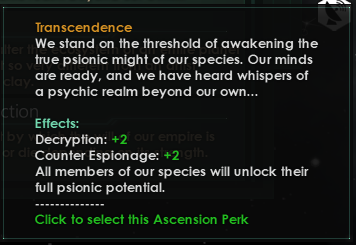 Tell us your secrets. 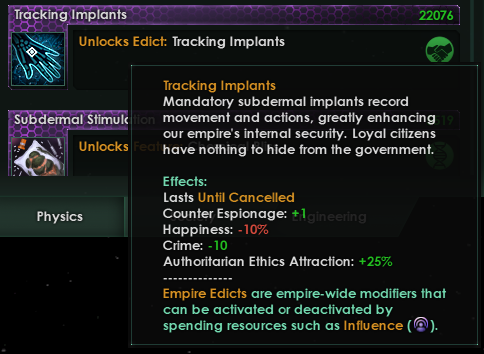 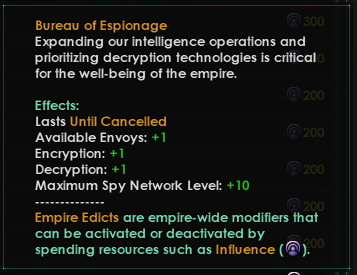 More of the new Edicts.


Putting Your Spies to Work

Now that you’ve built up your Spy Network, what can you do with it?

Back in Dev Diary 194 we had a redacted value shown in the Intel breakdown tooltip - Spy Network level is that third hidden value alongside Diplomatic Pacts and Trust. 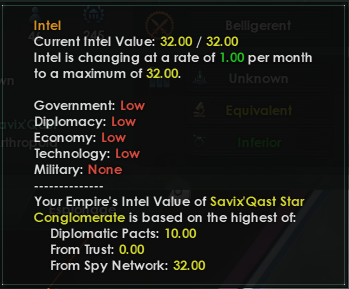 While your Spy Network passively provides intelligence, you can also have them be more active. Your Spymaster envoy can send agents out, using the Network's bandwidth ("Spy Power") to run Operations within the targeted empire while they stay safely at their base.

* Subterfuge - Information gathering and operations that improve the spy network itself
* Sabotage - Ruining things (physical or immaterial)
* Manipulation - Replacing the truth with your own improved version
* Provocations - Don't do these, they're bad

Most Operations also have a subcategory of Government, Diplomacy, Economic, Technology, or Military, matching the Intel Categories.

More details on how to perform Operations (and how Assets can be used to improve them) will be the focus of next week’s diary. See you then!

Super cool ideas you have guys, but don't call them spymasters name them surveillance envoys or inquisitors or something.

Also how about making it possible changing the primary species. I'd love to see empires k which foreign aliens get integrated and then take over the government etc.
Reactions:

I'm very excited for this, I hope its balanced for multiplayer!
Reactions:

Cannes said:
One thing that this all lacks is crucial! False flag operations! Without it, spying will never be all that it can be!
Click to expand...

read the rest of the dev diaries

there is already a "make it look like someone else is attempting sabotage" action in development
Toggle signature
MEIOU & Taxes is only conditionally awesome.
If you don't want politics in your games, play Tetris.
Coloured wastelands should default to off, because they are a user interface antifeature.
Reactions: