Jump to latest Follow Reply
Menu
Install the app
You are using an out of date browser. It may not display this or other websites correctly.
You should upgrade or use an alternative browser.
Cities: Skylines 5967 Support & Bug Reports 7842 Suggestions & feedback 2976 Modding & Resources 1871 Official Information & Announcements 139 City Journals and Let's Plays 481 Cities: Skylines Console & Windows 10 Edition 885
Previous dev diary Next dev diary
It's been a while since I last wrote an official company post for the forums and it's good to be back with some exciting news! We have relocated the offices of Colossal Order closer to the city center and it is awesome! 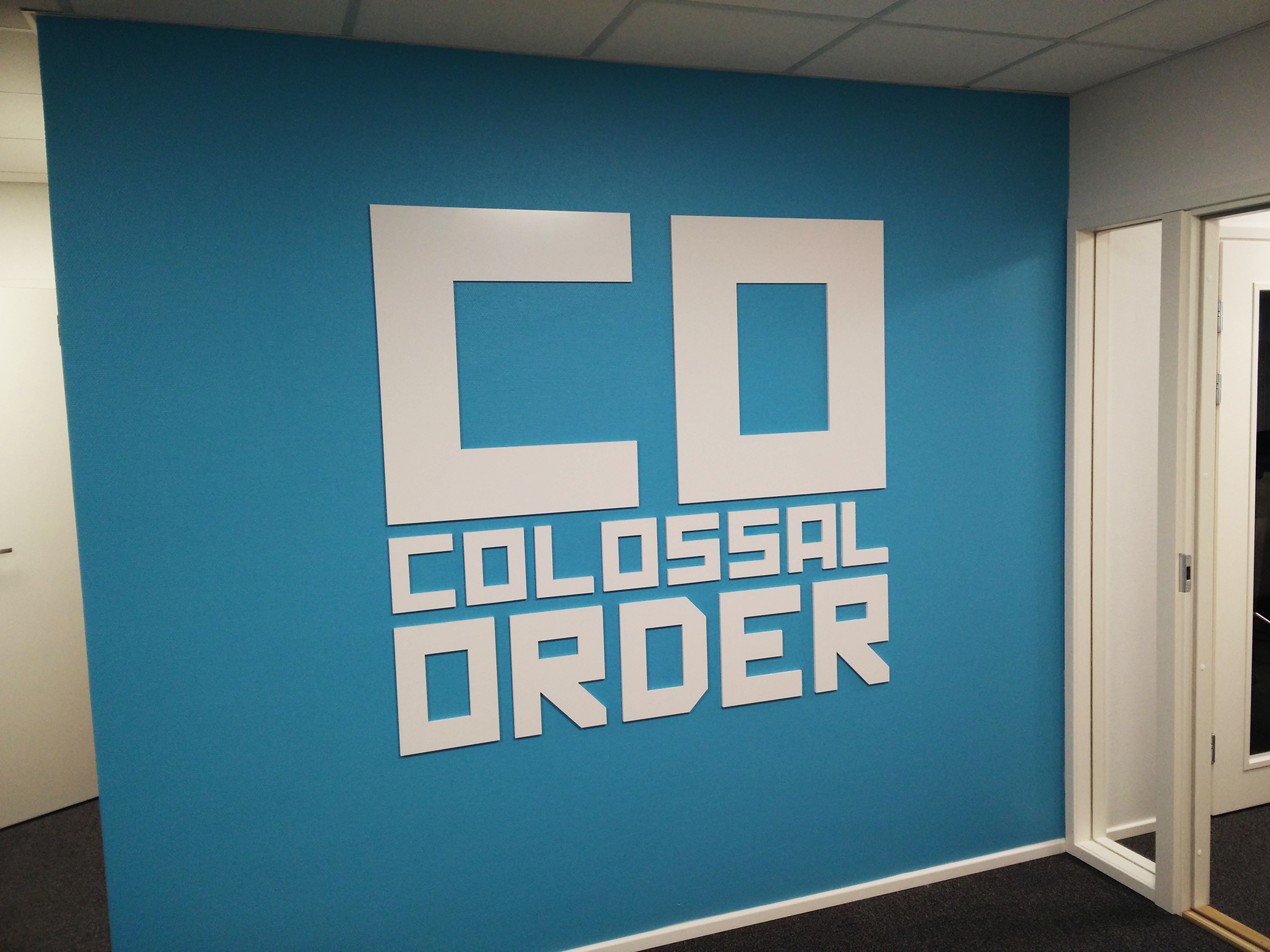 For the past four-ish years we had been working in this small industry building complex near the University of Tampere and while the offices (we changed offices within the industry building complex just before the release of Cities: Skylines) there had their own charm, the facilities (most importantly the amount of toilets) was insufficient for the growth of the company. Both of the old offices were also not quite suited for the work we do. We had a too small meeting room to house every person during design meets and for the artists the lighting at the offices was at best sub-optimal and at worst dreadful. The lights were these basic office lights that blasted directly at the screens so we chose to sit in the darkness instead – this lead to the artist room being called ”The Dungeon” or ”The Cave”. 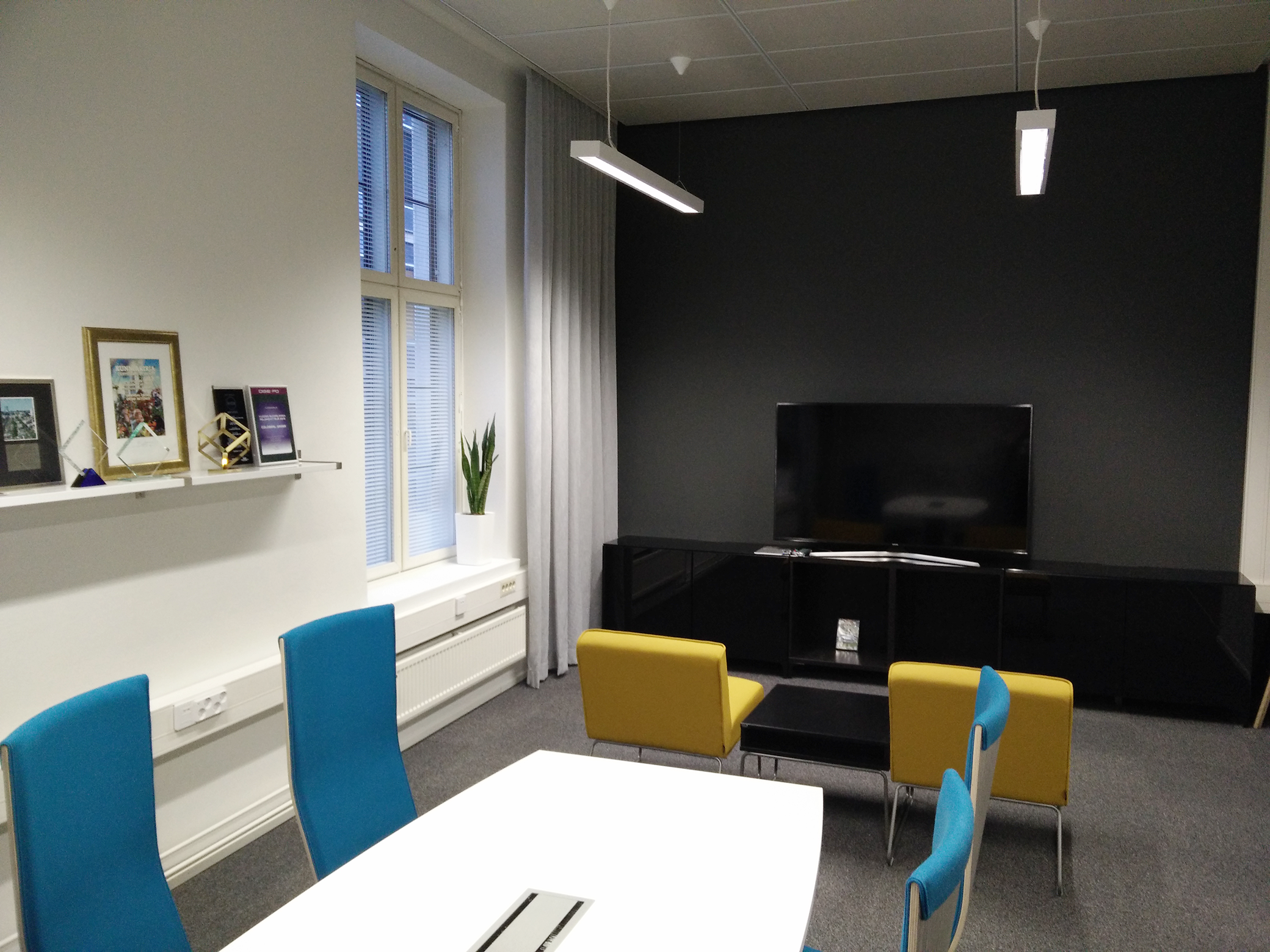 The visitor lounge is where we meet possible visitors to the office. There's going to be a game console or two if you want to hang around or if the people at work want to spend their coffee breaks playing some games.

In addition to the sorry state of available toilets, one of our neighbors happened to be a gym which was located directly on top of our offices and once the bodypump and kettle-bell sessions started (with the appropriate gym music providing the rhythm) all was lost. We also fought a losing battle against the AC units that decided to work only few weeks per year, usually at the turn of September when air cooling wasn't really needed. 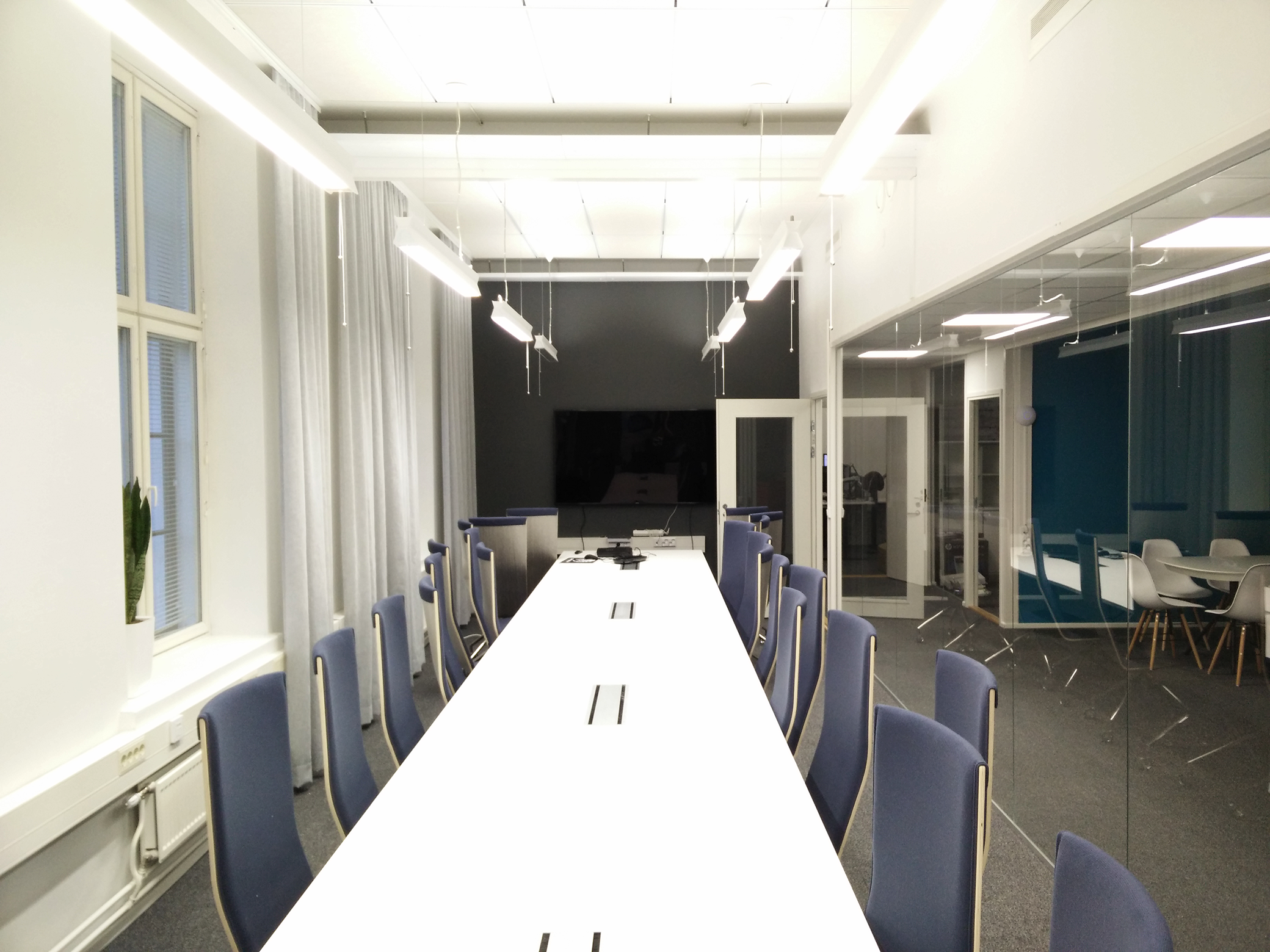 The large meeting room which can fit something like 30 people or so. Here we have our weekly Monday meetings.

But now all of that is behind us and we are at the new office! The new office layout is far better for our use. For the first time ever, the different disciplines (programming, design, art, QA) have their own rooms. Artists share a large room together and programmers and designers make up the other large room next to the artists (design and code share the space because their work is more closely linked to each other). Our QA lead Igor (and his future minions) has his own domain, as well. Our CEO's new glass-walled office is located across the main meeting room. 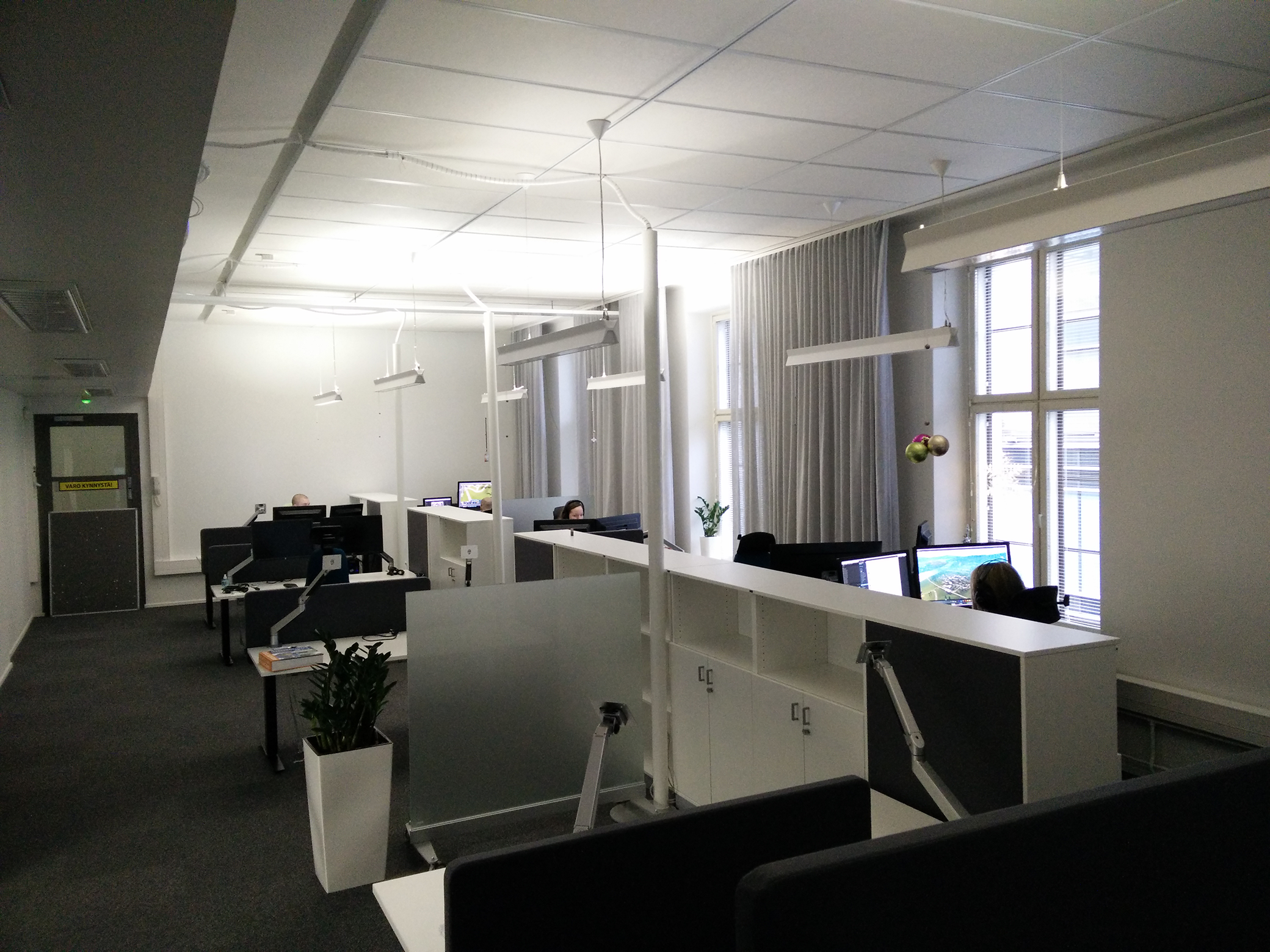 No more living in a dark "cave". We now have proper in-direct lighting in place.

We now have a huge meeting room where we can house twice the amount of people currently work at the company and we also have a smaller meeting room for the more casual design meets. The office also has a dedicated streaming room (which is still under construction – gotta get those green screens and lights set up properly!). For the first time ever we now have an actual visitor lounge where you can spend time if you happen to visit the offices. It's also to keep the visitors out of the development areas where all the work under the NDA is done. Our new kitchen is also very nice. It takes inspiration from a local British-style pub-restaurant called Soho that is one of our favorite lunch places in Tampere. 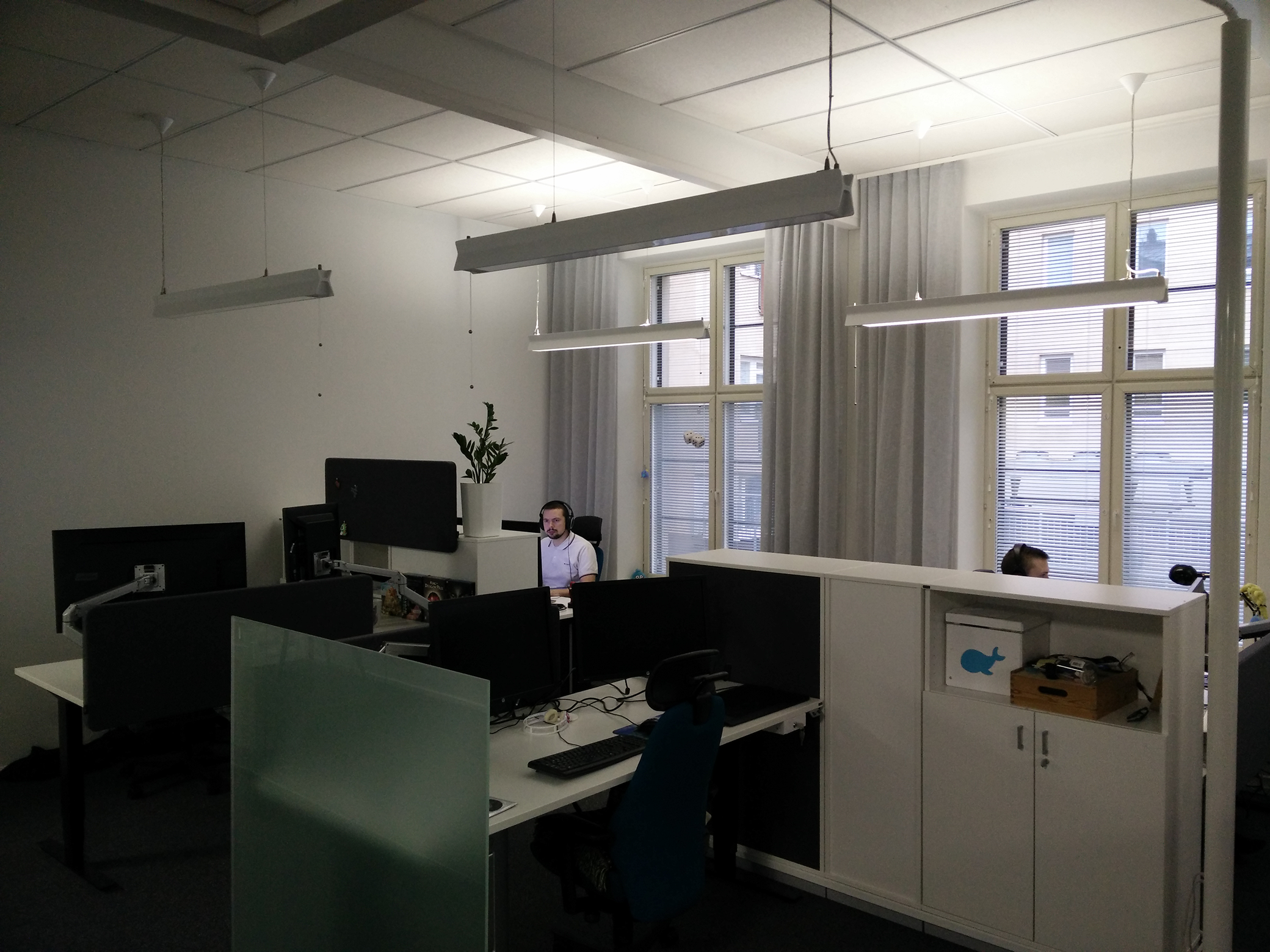 Programmers and designers share the large room. Gebbiz can be seen coding in the back corner. 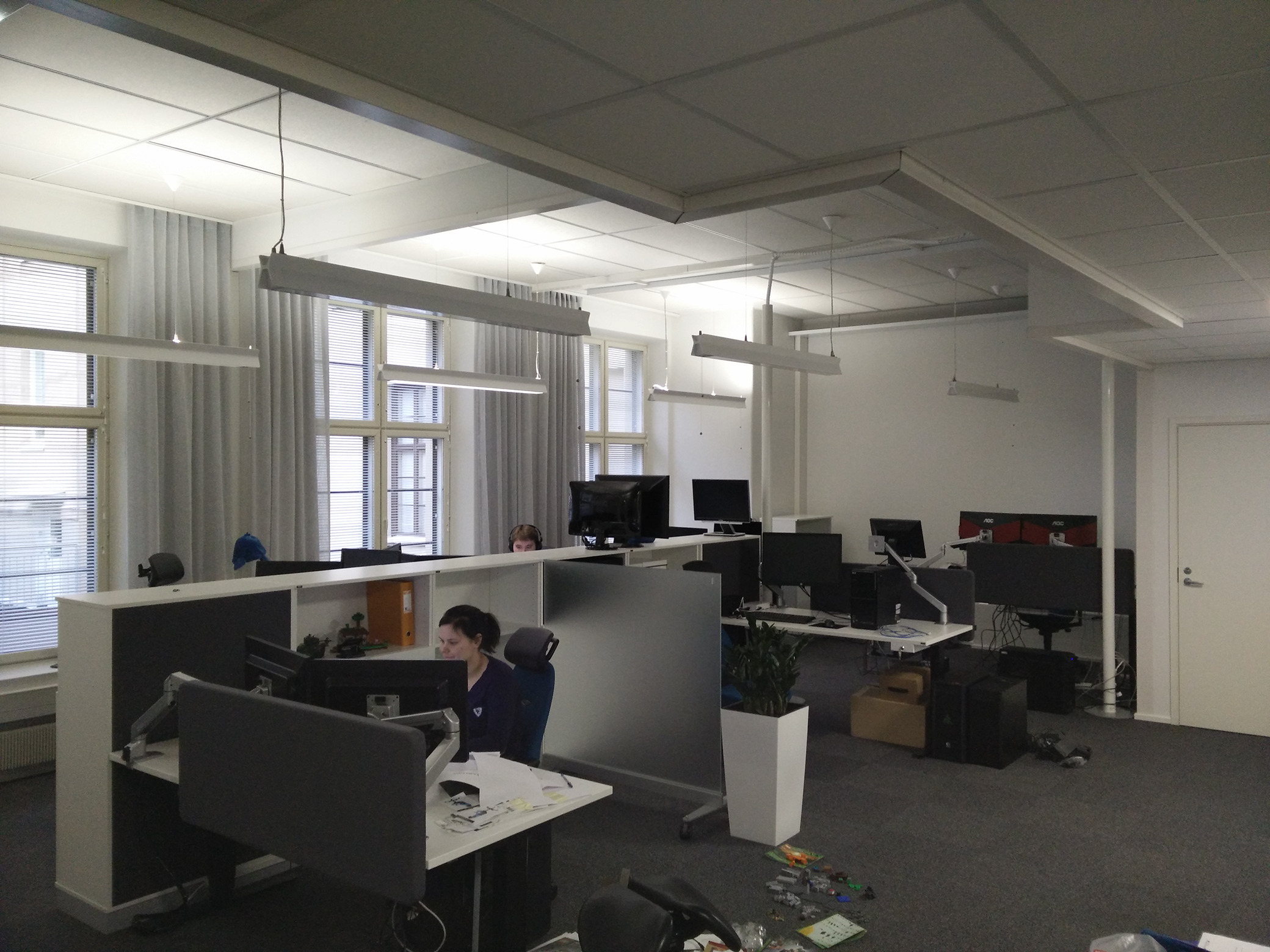 Programmer/design room from another angle. Emmi, our producer, at her workstation. On the ground among other things is a Minecraft LEGO set in pieces. There might be a piece or two missing since the move.

In addition to new spaces to divide the different disciplines more logically we also have other improvements to the overall working conditions. The office now has proper lighting across the work spaces. The new lights have adjustable brightness as well as the possibility to use indirect lighting instead of the regular “burn your eyes and screw the monitor colors” mode. And let me tell you: it is fantastic. We now have a nice, soft ambient lighting in the artist room which doesn't affect the monitors' ability to reproduce colors. All of the lights in the office are also motion-sensitive so they also save energy and shut down when no one is around. 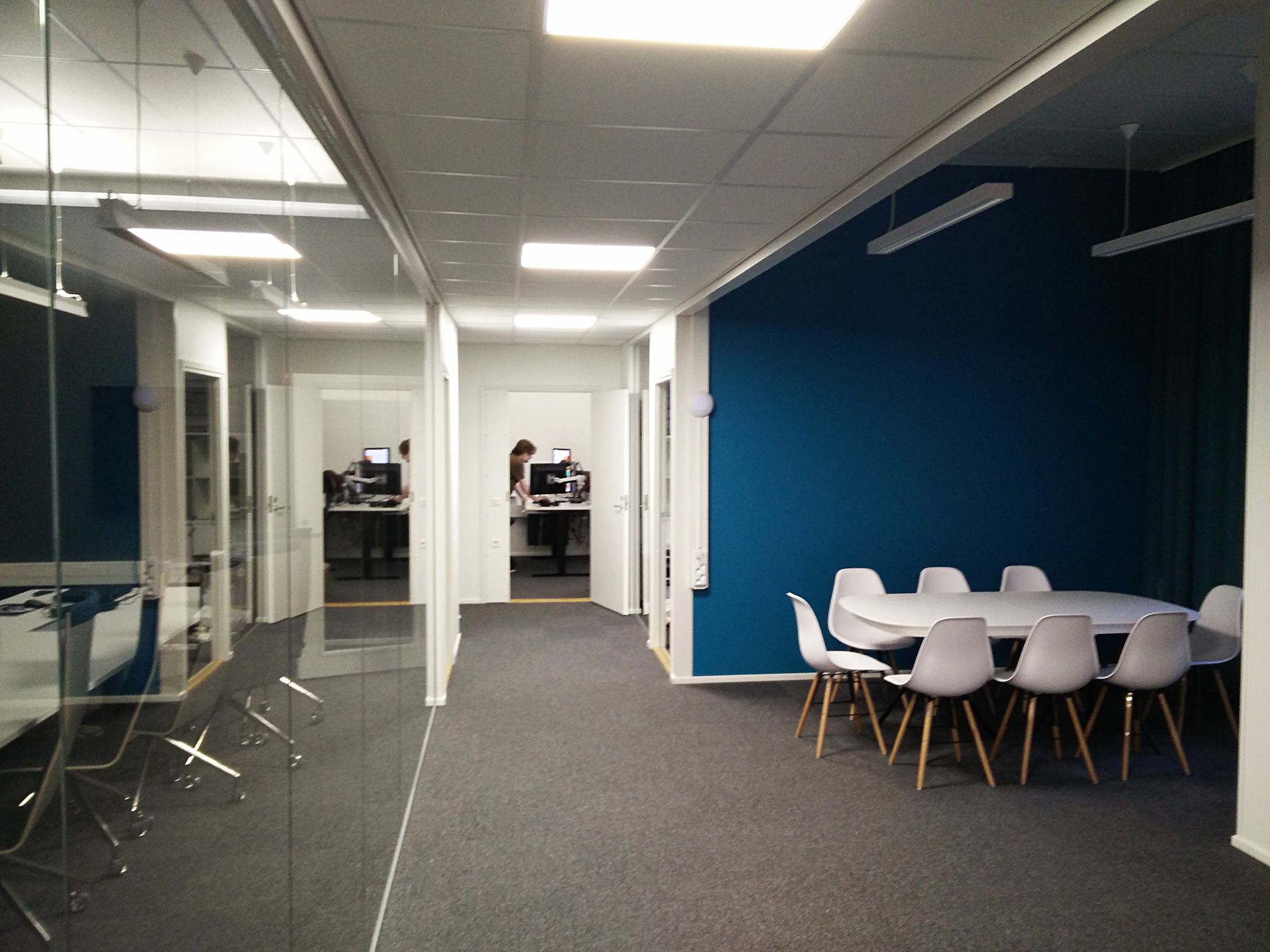 Our QA Lead Igor setting up his workstation after the computers were brought to the new office. 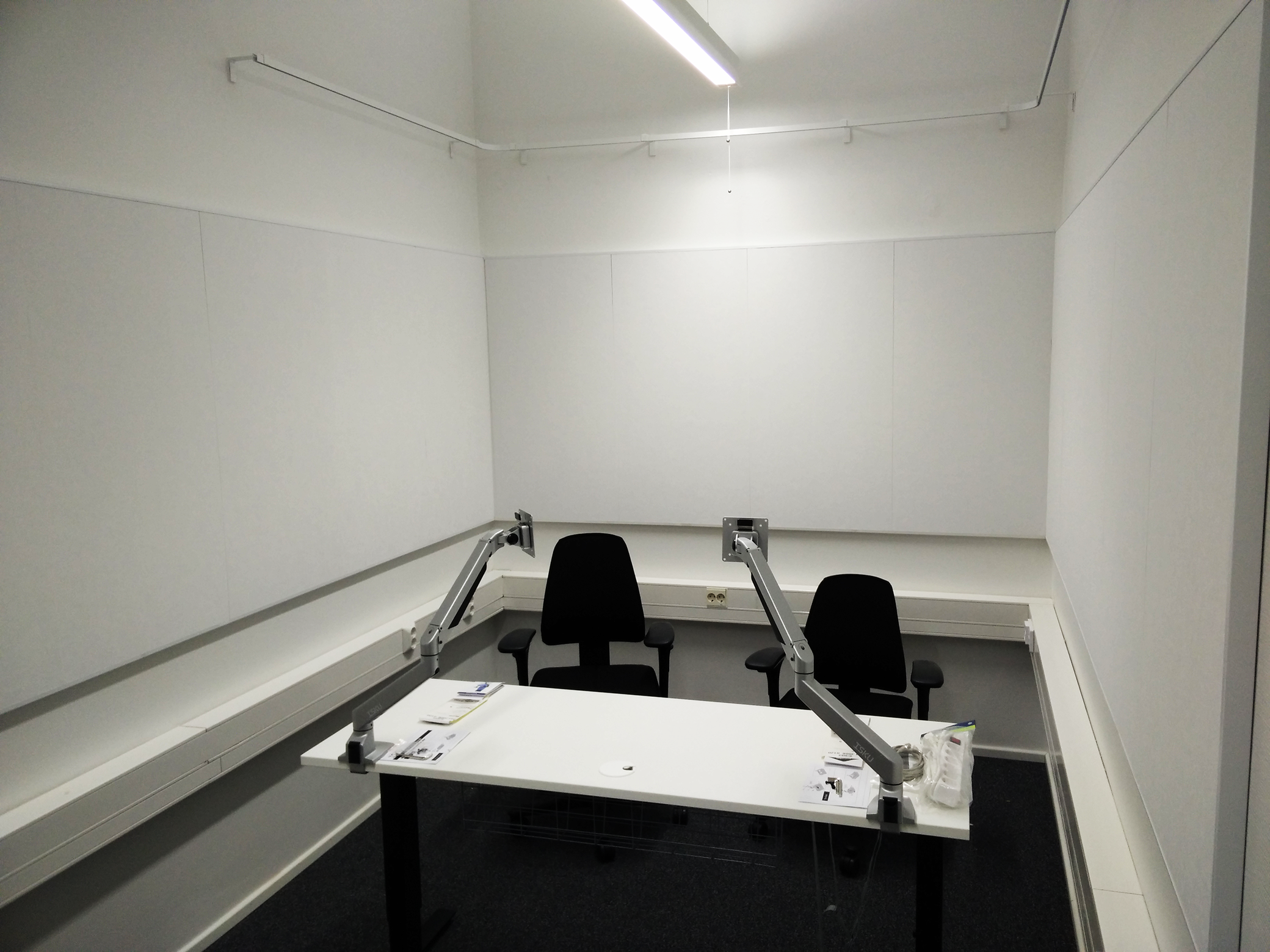 Our dedicated streaming room which is still under construction. There's going to be a green screen and proper lights and microphones and all that jazz. And a computer, too!

Work ergonomics have also been improved. Everyone has a new, super-adjustable chair and an electric, height-adjustable desk which means we can switch between sitting down and standing up. I personally have been working standing up for the past three days now and surprisingly it feels pretty good. Modeling and texturing assets feels almost as natural as sitting down. The different working positions are also supported by the new monitor arms which allow us to adjust the height and rotation of all the screens to our liking so whether you work sitting down or standing up, the monitors are always in the optimal position. Now we don't have to fight with the AC either; the office is bigger and more open and the AC units work as intended and the air actually feels fresh. 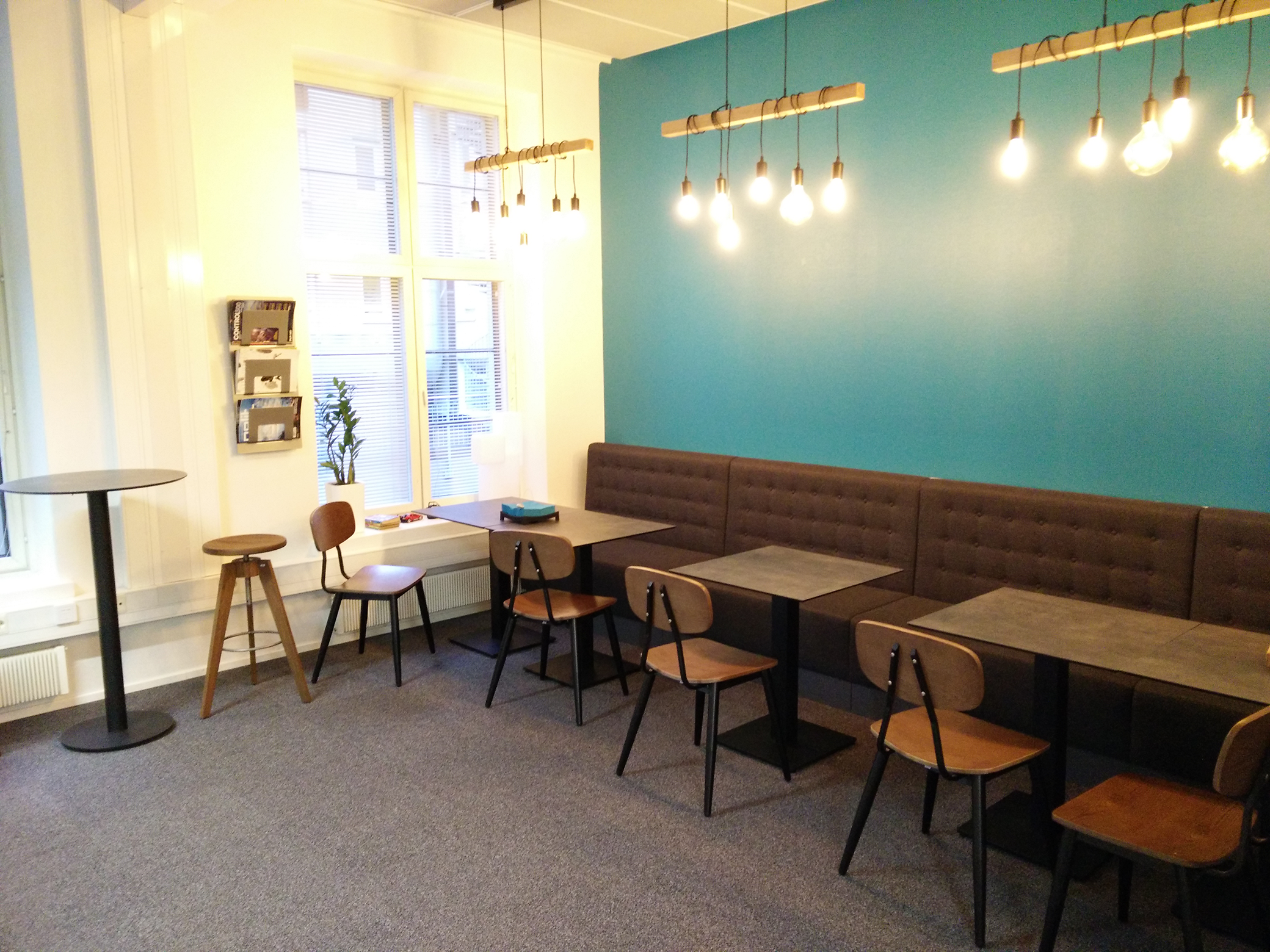 The new kitchen is really cool. We have regular tables and bar tables where you eat either sitting down or standing. It's all about ergonomics! 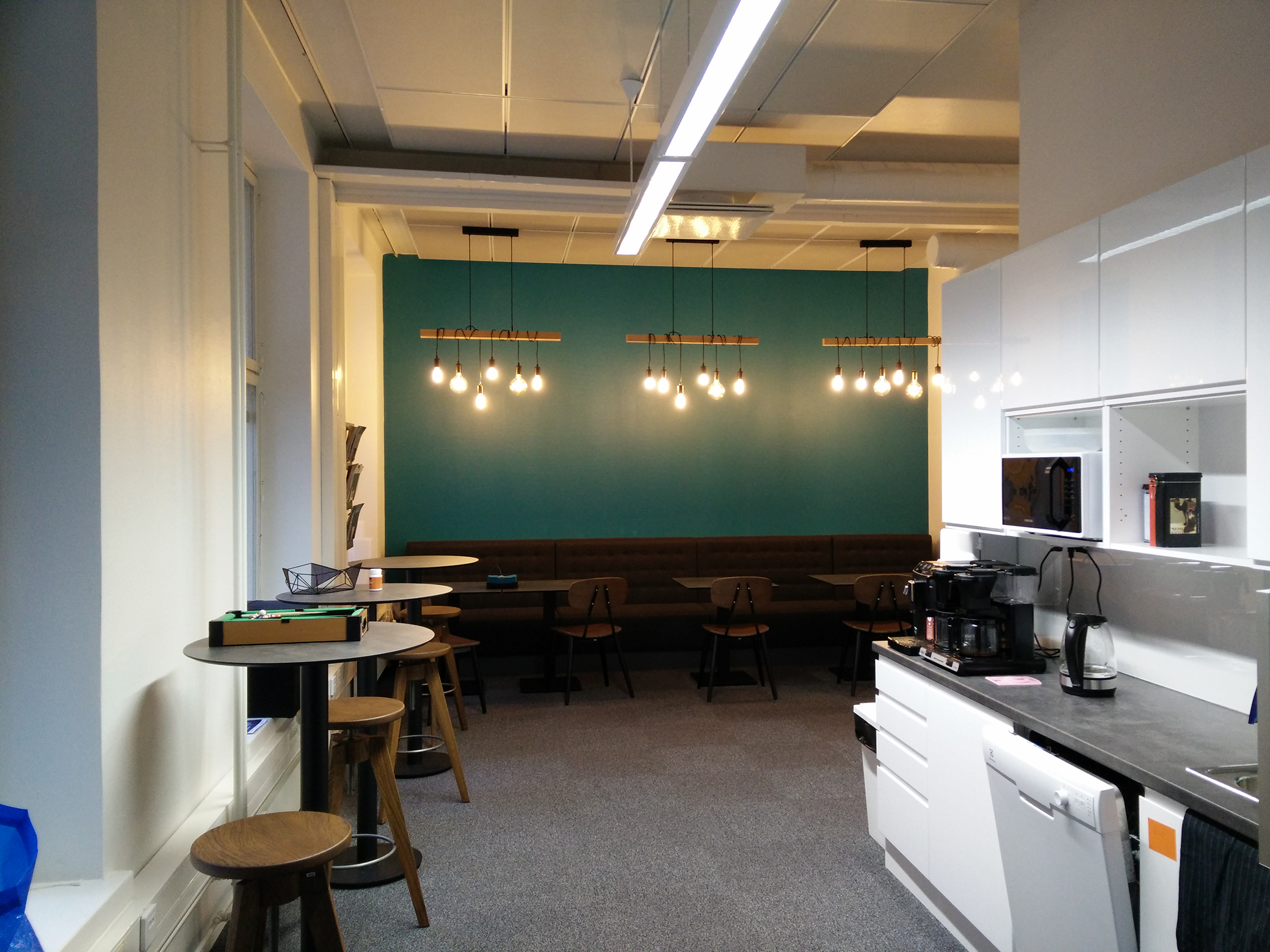 Another angle of the kitchen. A game studio isn't going to work without proper amounts of coffee so we have a couple of different coffee machines: the regular dual-pot coffee maker and a one-cup coffee machine.

Now that the office is also located closer to the city center we have more lunch possibilities to choose from. Previously if you wanted to have some delicious chicken teriyaki for lunch at the best Japanese restaurant in Tampere, you had to walk across the city to get there. But now the lunch treks are far shorter! Yay for that! We are literally surrounded by nice lunch places. Although, there is one popular place closer to the old office, Baba's Kitchen which serves a mean pita kebab. But now it's a bit too far away. Oh well, you win some, you lose some, I guess. 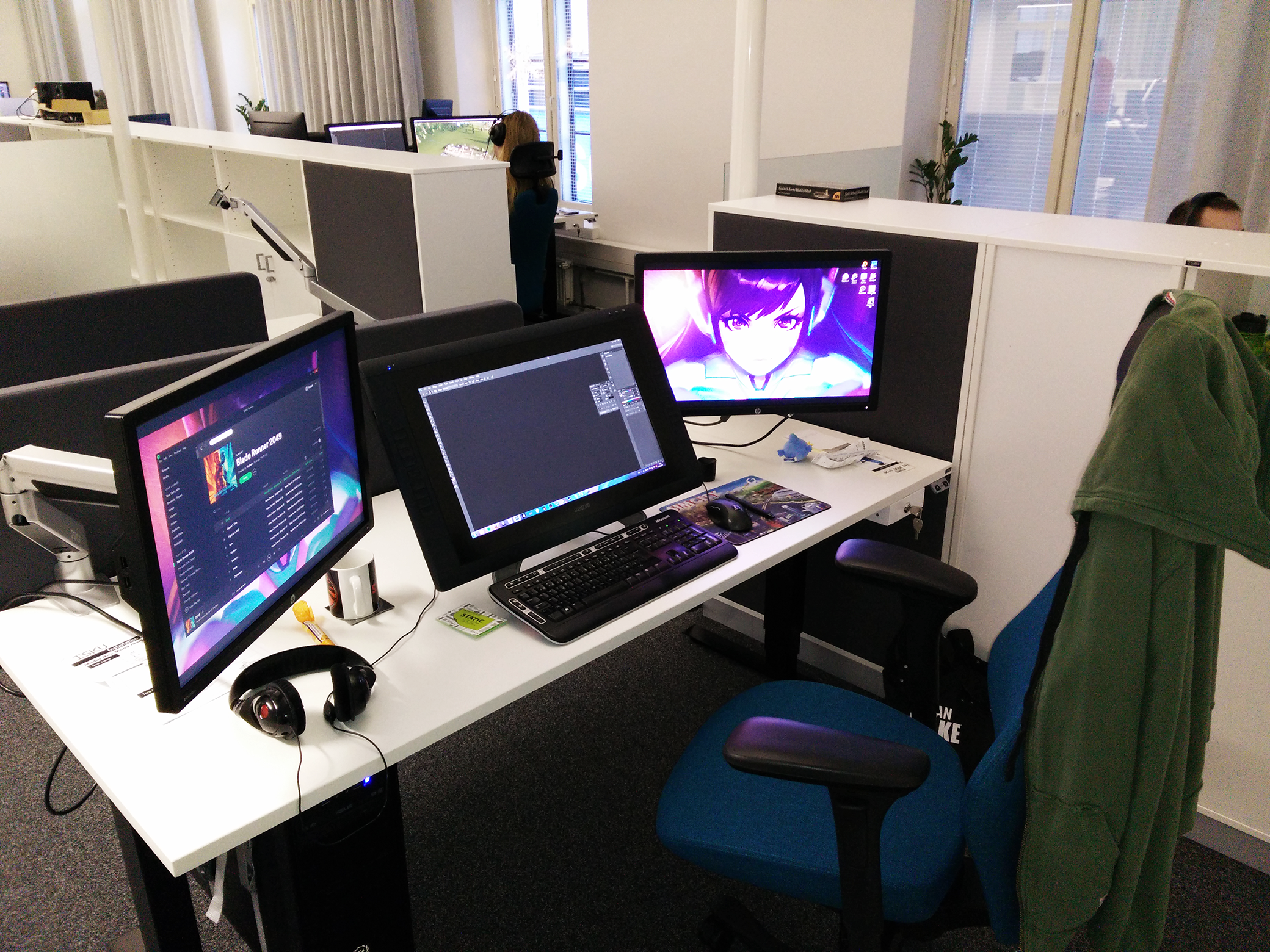 This is my workstation. We have electronic, adjustable-height desks and currently I'm working standing up. We also got neat new chairs. The latest addition to my workstation is the new Cintiq 22HD which I'm still learning to use after using a regular Wacom Intuos for so long. It's pretty cool!

Of course, all of this is really good and improves the working conditions tremendously but the most important improvement here is that instead of one toilet we now have four toilets!

All in all, we are very happy with the new office even though it was quite the task to actually move everything, do a proper overhaul of the new office and set up everything so we can continue to work on the game. I'm sure that with the new and improved surroundings, better and more user-friendly workstations and facilities we can only aim higher and do even better things in the future!

OMG I love your new offices, I work in an open space inside a repurposed old textile factory with no windows, no AC, roof heating and a lot of chaos all around

There's only one thing I find puzzling: why are there no Chirpy figures around ????
S

Just like in Game Dev Tycoon. Lots of money? New offices. At least you didn't have to buy your own building.
Toggle signature
We have learned to fly the air like birds and swim the sea like fish, but we have not learned the simple art of living together as brothers.- Martin Luther King Jr.
The whole problem with the world is that fools and fanatics are always so certain of themselves, and wiser people so full of doubts. - Bertrand Russell

Congratulations on your new offices! Love that wall with the logo as you come in!

I must agree with DarkImpaler, there's a clear lack of Chirpy stuff! And I spotted a SimCity mousepad in there.
Toggle signature
My workshop items | List of broken and incompatible mods

Looks nice and modern. Thanks for sharing!


Avanya said:
Love that wall with the logo as you come in! And I spotted a SimCity mousepad in there.
Click to expand...

I love the wall too. The SimCity mousepad is great, I'm also using one.
M

Wait something is wrong! No pictures of cake! I assume there will be a party to celebrate the move. Well deserved, enjoy.

Aww, you mean @co_martsu now has her very own goldfish bowl?

The old office sounds like it left a lot to be desired. Was pretty cool looking on the outside though.

The new office sounds so much better. Can't wait to see the outside of it.

Nice new office. It's good to not only be doing something fun for a living but also enjoying the work environment. Congrats
Toggle signature
My Workshop http://steamcommunity.com/profiles/76561198185148005/myworkshopfiles/?appid=255710
M

how does the boss see if the employees in your company are working or playing the game?
but since there are updates every few weeks they are working.
nice office!

And you forgot to mention there is H&M just round the corner !

Man, I would really love to get a Cintiq. It's just above my need/want threshold. Glad you have a nice place to nest!
C

co_fiirdraak said:
IThis is my workstation. We have electronic, adjustable-height desks and currently I'm working standing up. We also got neat new chairs. The latest addition to my workstation is the new Cintiq 22HD which I'm still learning to use after using a regular Wacom Intuos for so long. It's pretty cool!
- Henkka
Click to expand...

Hey! Someone is playing C:S instead of working on that computer right there! She thought we didn't notice, but we did! ... oh wait!

Good chairs, I have the older model of the same chair (head-rest is a bit different) at the office and they're really good for people of all sizes.
The monitor-hand-thing is really cool, I've never seen that before. Did you guys have to get special monitors for it, or does any monitor fit as long as you can remove its own stand?


co_fiirdraak said:
The office now has proper lighting across the work spaces. The new lights have adjustable brightness as well as the possibility to use indirect lighting instead of the regular “burn your eyes and screw the monitor colors” mode
Click to expand...

vukica said:
The monitor-hand-thing is really cool, I've never seen that before. Did you guys have to get special monitors for it, or does any monitor fit as long as you can remove its own stand?
Click to expand...

Pretty much all the newer monitors fit to the arms when you just remove their own stand. The system is called VESA standard
Here's a picture: