Your Team Needs You! - Devs vs. Hearts of Iron Community Livestream

Jump to latest Follow Reply
Menu
Install the app
You are using an out of date browser. It may not display this or other websites correctly.
You should upgrade or use an alternative browser.
Hearts of Iron IV 37695 After Action Reports (AAR)


Chain of Command Multiplayer - Developers vs. The Hearts of Iron Community

It's Hearts of Iron IV's 4th anniversary on June 6th, and to celebrate we're holding a multiplayer event for the ages.

On June 10-12 a team of four content creators, backed by the wider Hearts of Iron community, will do battle with a team of four players from the HOI Dev team.

For the first time in an official multiplayer event, you can participate, helping to shape the community teams strategy and choosing its leader.

It's going to be a chain-of-command stream, meaning that all each team will be playing one nation; Democratic UK for the Community team, and Imperial Germany for the Devs. 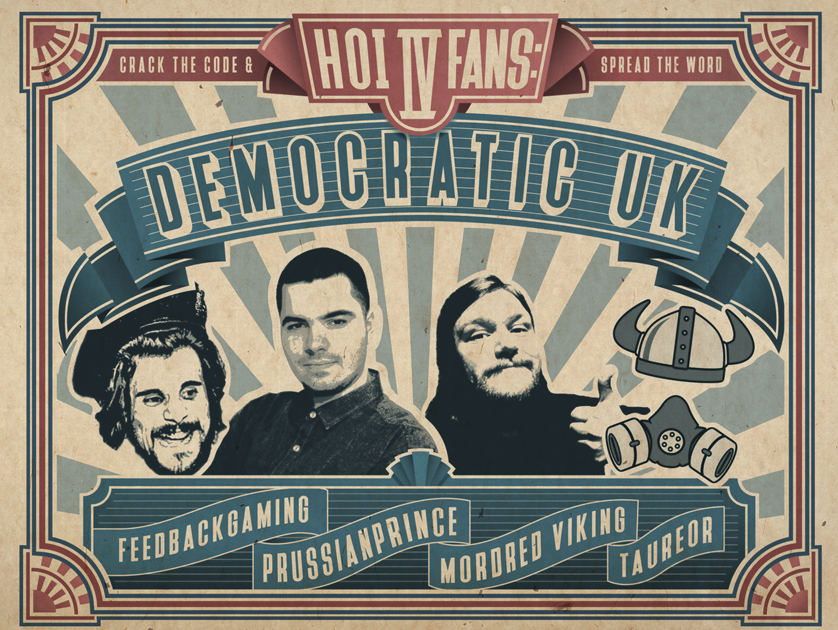 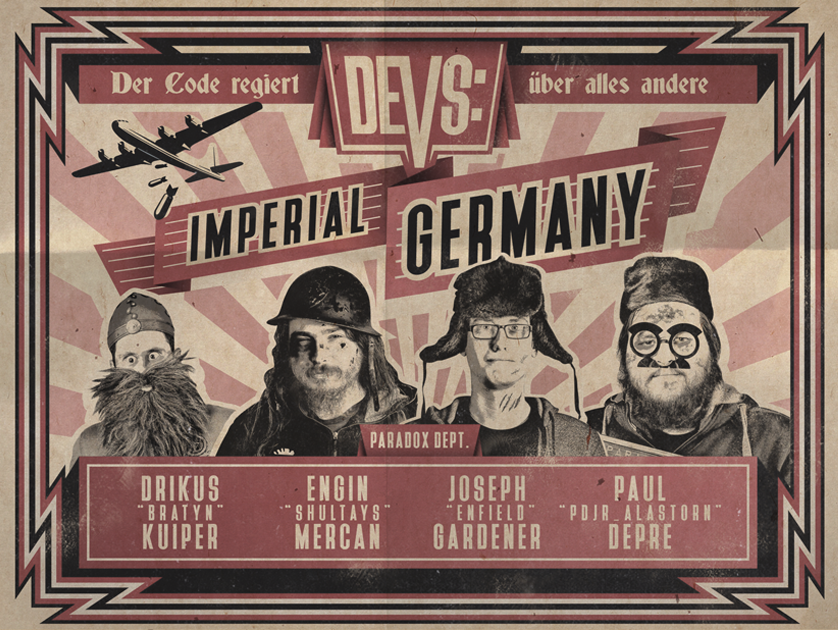 The Developers won't just be playing against the four players controlling Britain, but also a 'Virtual House of Commons' made up of ordinary Hearts of Iron players from all kinds of different communities.

The Virtual House of Commons will, via Discord, choose which of the four players will become 'Prime Minister', discuss and vote on strategy, war declarations and other major decisions, and if they are unhappy with how the game goes... vote to sack the Prime Minister and appoint another.


How You Can Take Part


In order to take part in the Virtual House of Commons, you'll need to be either be nominated by one of the participating Hearts of Iron Communities, or win election on Hearts of Iron's official communities like Facebook, Twitter, Steam or here on the Paradox Forums.

If you would like to be a part of this, you can nominate yourself using this form: https://pdxint.at/3eMr947

You can, if you like, write a little bit about your prowess at HOI and how you'd be good if chosen, and then from the nominations we will create a shortlist of candidates. Everyone on the forums will then be able to vote for who should represent the Forums.

The election will take place on June 5th 2020, for 24 hours. We'll do another forum post with a voting link then.

If elected, you'll be able to join a Discord server and take part in votes and discussions from Sunday 7th June, through to the end of the event on Thursday 12th June. We don't anticipate this will take up a lot of time, but obviously that depends on what the house wants to discuss and vote on!

A Feedbackgaming and Taureor UK?
We can expect no Navy, production of Guns only and 10/0 Infantry until 1942 (then upgrade to the newest 7/2s), researching Dispersed AND Concentrated Industry and no DDay, but getting military access from Germany, then swarm them with small units and declare war on a minor in the german faction (Order66).

So, we're definitely nominating and voting for secret master right?
Toggle signature
Will HOI4 be released on H hour CET of D Day? - Mannstien
Once again though, there are no actual zombies, it is all hysteria and panic. - Darkrenown
No, cats were invented in 1902 by Satan, but we included them for gameplay reasons. - Darkrenown

I have many questions
Toggle signature
Reject reason and you get hoi4 | bugs | suggestions | Please ping me in a thread instead of DMing whenever possible | Read the forum signatures of moderators and draw your own conclusions | Buying DLC will not fix your grievances with the base game. On the contrary, you'll support the status quo.
Reactions:

bitmode said:
View attachment 584344
I have many questions
Click to expand...

Recently promoted to pr I guess.
Toggle signature
Will HOI4 be released on H hour CET of D Day? - Mannstien
Once again though, there are no actual zombies, it is all hysteria and panic. - Darkrenown
No, cats were invented in 1902 by Satan, but we included them for gameplay reasons. - Darkrenown

Secret Master has my vote!
Toggle signature
Vary the appearance of icons in HoI4 in order to depict unit strength
Describe what words or phrases introduce confusion or ambiguity in HoI4.
Revealed: Raj's historical unit structure in 1936 (proposed historical templates)
Lesson learned: Don't switch from Single Player to Multiplayer. If you do, the game will crash or desync

Where is Tommy Kay? He is bigger than all of the featured You Tubers. This is just bloody ridiculous. Stop ignoring Tommy and give him what he deserves. He is one of the only reasons people are still interested in the game. He is still there long after most You Tubers have left the game. Get good Paradox.
Reactions:

Now I'm not one for electioneering but a vote for Me and Sooty wouldn't go amiss ......


Looking forward to seeing what happens either way!

I've actually been around in the HOI Community team for about 18 months; this was just my first foray into writing a forum post
Reactions:

We'll be closing nominations for this at 00:00 CEST tonight, so if you want to take part make sure you fill the form out before then!

I nominate Tommykay for wildcard player as Communist Soviets
Reactions:

So wait, are we supposed to “campaign” in the voting thread once it opens? Also wasn’t sure if the election speech was supposed to be role play or actually talking about HOI/Pdx forum experience, and also whether we were supposed to use our forum name, discord name, an RP name, or the name we use in HOI IV MP, but oh well, too late now.

Regardless, seems a pretty interesting concept. Looking forward to seeing how it turns out.
Toggle signature
"The world is a tragedy to those who feel, but a comedy to those that think." - Horace Walpole
“The world is nearly all parcelled out, and what there is left of it is being divided up, conquered and colonised. To think of these stars that you see overhead at night, these vast worlds which we can never reach. I would annex the planets if I could; I often think of that. It makes me sad to see them so clear and yet so far.” - Cecil Rhodes (A Victoria player before Paradox, dreaming of Stellaris)
"Any nation that decides the only way to achieve peace is through peaceful means is a nation that will soon be a piece of another nation." - Richard Milhous Nixon
"The quickest way of ending a war is to lose it" - George Orwell
"Do I not destroy my enemies when I make them my friends?" - Abraham Lincoln
A Tragedy in 10 PAARts: An Amateur's Italian MP AAR (Complete)
The Rise and Fall of Hilter's Reich: Dominican Republic MP Latin American Thunderdome Mini-AAR (Complete)
Duly Elected MP for the Paradox Forums Constituency in the Virtual House of Commons for the June 2020 Chain of Command Devs vs Youtubers Clash.

This sounds fantastic! really looking forward to watching it play out.

The Wolf26 said:
Where is Tommy Kay? He is bigger than all of the featured You Tubers. This is just bloody ridiculous. Stop ignoring Tommy and give him what he deserves. He is one of the only reasons people are still interested in the game. He is still there long after most You Tubers have left the game. Get good Paradox.
Click to expand...

Who is Tommy Kay?
Toggle signature
Closed the Gates of Hell by filling it with cows!
"You get what you pay for" simply does not apply to computer games.

Emren said:
Who is Tommy Kay?
Click to expand...

The Wolf26 said:
Where is Tommy Kay? He is bigger than all of the featured You Tubers. This is just bloody ridiculous. Stop ignoring Tommy and give him what he deserves. He is one of the only reasons people are still interested in the game. He is still there long after most You Tubers have left the game. Get good Paradox.
Click to expand...

I dunno if it might be his availability for it, or if it has a requirement that he doesn't meet, but I mean, the same thing could be said for Bokoen1 as his videos on HoI4 in a nutshell are pretty popular. It's all a matter of which they choose as a company to fight against.
Toggle signature
"Alaska Is Canadian Territory!" - Me
“Will license leasing affect autonomy in Death or Dishonor?”- Me, the spammer on twitch streams
"Could you change integrated puppets to a similar colour to their overlord?" - Me during the Man the Guns release
K