ASlightlyCrispyPierogi said:
Yeah sure, okay. Does this normally happen when the Avars spawn?
View attachment 401455
Click to expand...

Justinian The Avar conquers Constantinople- That would make a great film.

I think it doesn't happen.
Last edited: Sep 3, 2018
Expand signature
-- Part of the Developer team of WtWSMS mod for CKII

Although I might post at some point a rather detailed AAR-like report (no promises) I'd like to show you the current state of my playthrough in 592 A.D: 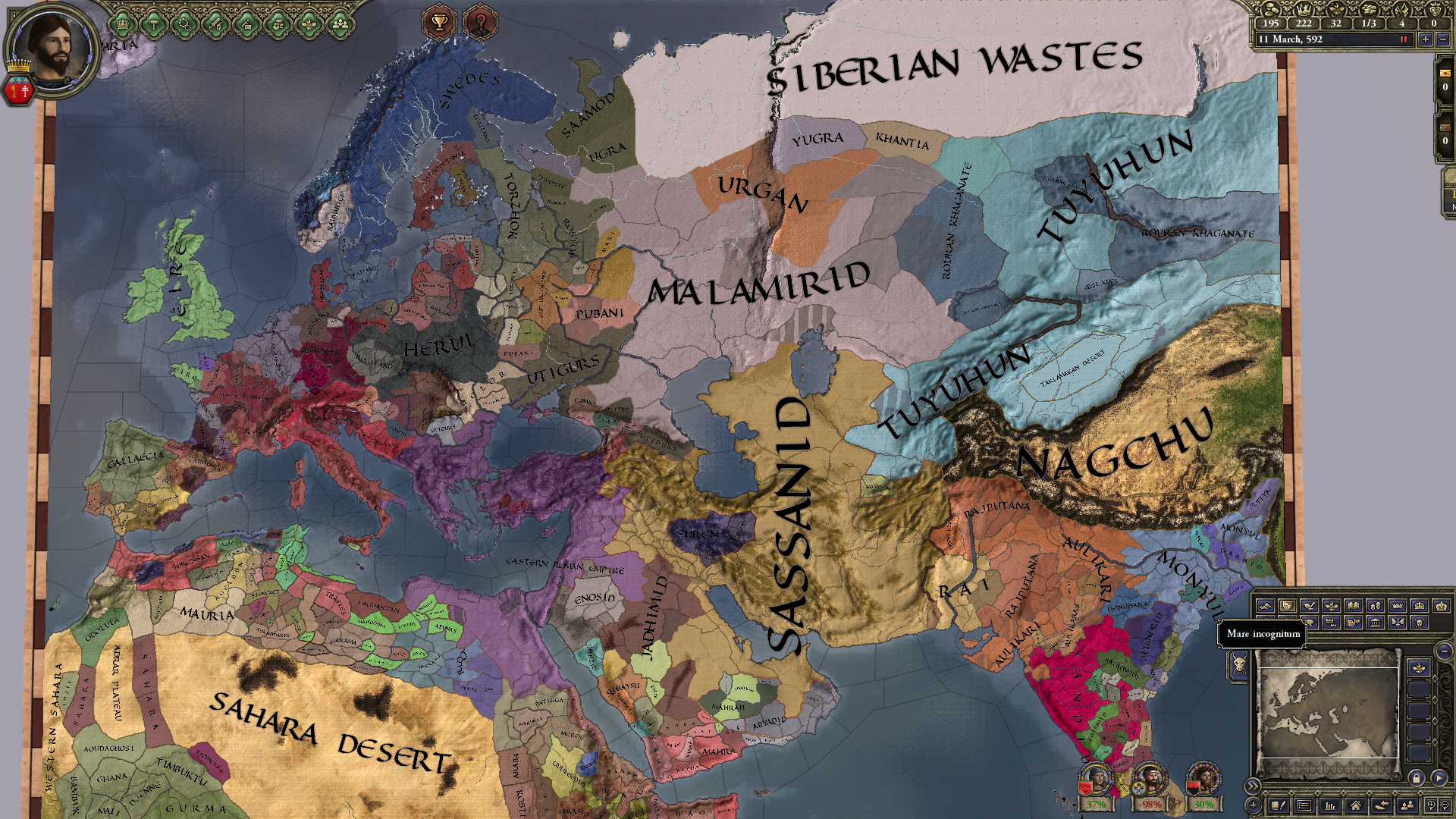 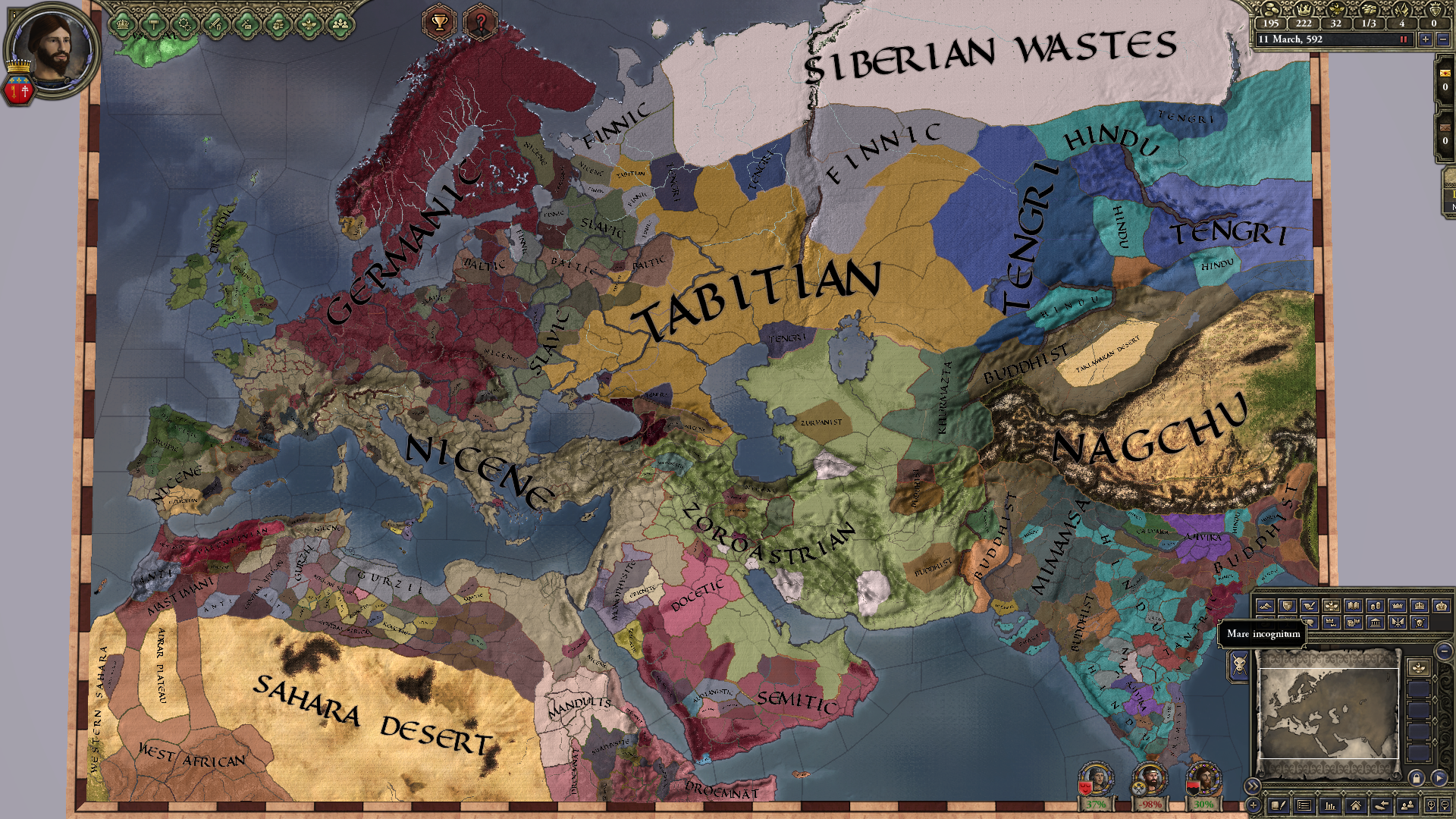 close-up of the region I've been playing at: 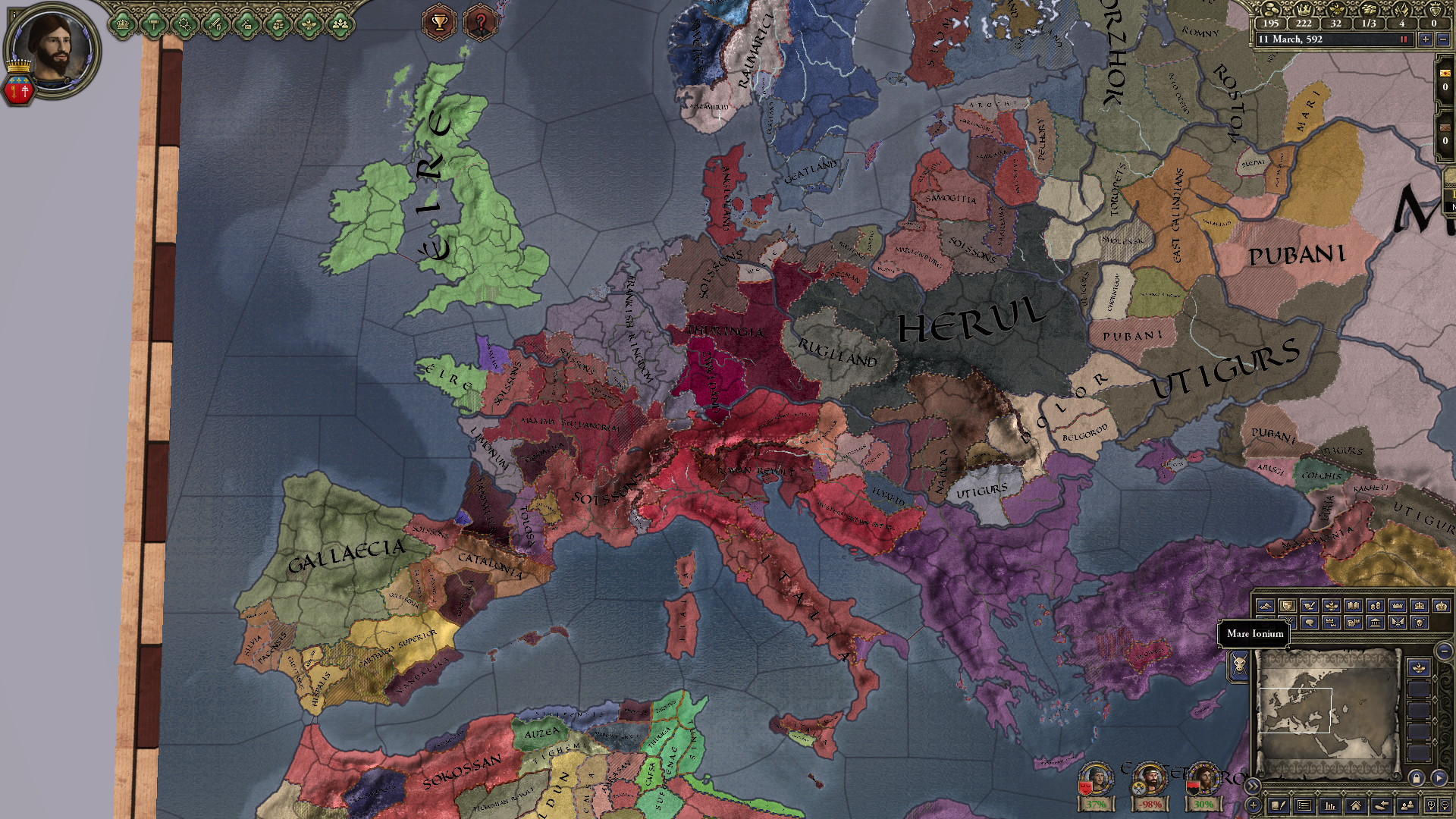 Up until now, I played as what became the united Celtic empire of Eire. The Faith is reformed by now, the realm is feudalizing, Sasana and Pictland exist as vasall kingdoms. I guess I created quite the unstoppable monster, if I'd continue to play them, so I switched rulers.
My greatest joy in CK2 is to create interesting narratives and just continuing to tell myself this story (of a somewhat implausible Celtic world conquest) felt rather boring to me. So now I'll play as a Manichean count in southern Gaul.
As you can see, Gaul itself has somewhat disintegrated. The Visigothic kingdom is merely a remnant of its former size, having fractured into many warmongering duchies in Gaul due to pressure from Soissons, revolting Manicheans the unreformed Celtic kingdom of Gallaecia (how cool is that?) and frequent sea-raids by the Celtic empire.
Soissons itself just recently broke into two (and now three, if you count the current revolt) after a successful tyranny-revolt against "Verutius II 'the Tormentor'" who had ruled Soissons for 40 years from 541-583. During his reign, Soissons incorporated Burgundy and vasallized the former Visigothic Manicheans and even ventured into northern Hispania. His rule was marked indeed by great terror and saw many revolts. When his former tributiaries - the Franks - turned on him, the tide turned as well and Maxima Sequanorum broke free, effectively cutting Soisson's main-territory in two. Its belongings in southern Gaul are dominated by the duchy of Narbonensis which is still ruled by a Manichean duke. I'll play now as the Manichean count of Narbo Martius and we'll see, whether this infirm Soissons will be able to stop the growing tendency to anarchy in Gaul ... when I'll try to enhance it.
Also interesting to see is the comeback which the Western Roman Empire had just twenty years ago. From 476 till the 560's they sat quite in Dalmatia, but suddenly began a reconquest which already saw Annoria and Raetia Noricum re-incorporated. I hope they go for Italy next.

The east looks rather boring to me. The Sassanids keep getting bigger and bigger, the ERE survived the first decades of religious unrest and by now Nicene-christianity rules unchallenged. I'd really like some imperial decay mechanic for those two realms ... To the fear east we see the Tuyuhun Khaganate but I doubt they'l spice things up by invading the Sassanids.

One of the greatest features in this mod (in my opinion), namely the great religious variety through various christian / indian sects and many new religions, is slowly disappearing. Should have bumped religious revolt strength even more, I guess (2x right now). And I'd like to see more migratory invasions. The great CB notwithstanding, the AI rarely makes use of it, since on paper those realms they could invade look always stronger than they do and I guess AI reasoning prohibits invading them in this case. But this is just nitpicking.

I really like WtWsmS and I hope you keep developing it. It's great and a true pleasure to play

Franks are not ruled by a frankish king anymore, since the Merovings died out. In a gruesome war against the Saxons high Chief Witta of Lower Saxony successfully besieged Cuning's Theuderic's place of rule, captured his four son's and offered all of them (!) to the gods in 533. Hope came and was quickly vanquished, when the just born Gunthar died in 549 just days after he was born. Since then, house Yffing of the Angle's rules the Franks. And although all vasall's of Cynning Lübbe still adhere to Frankish culture, he saw no revolt up until now. 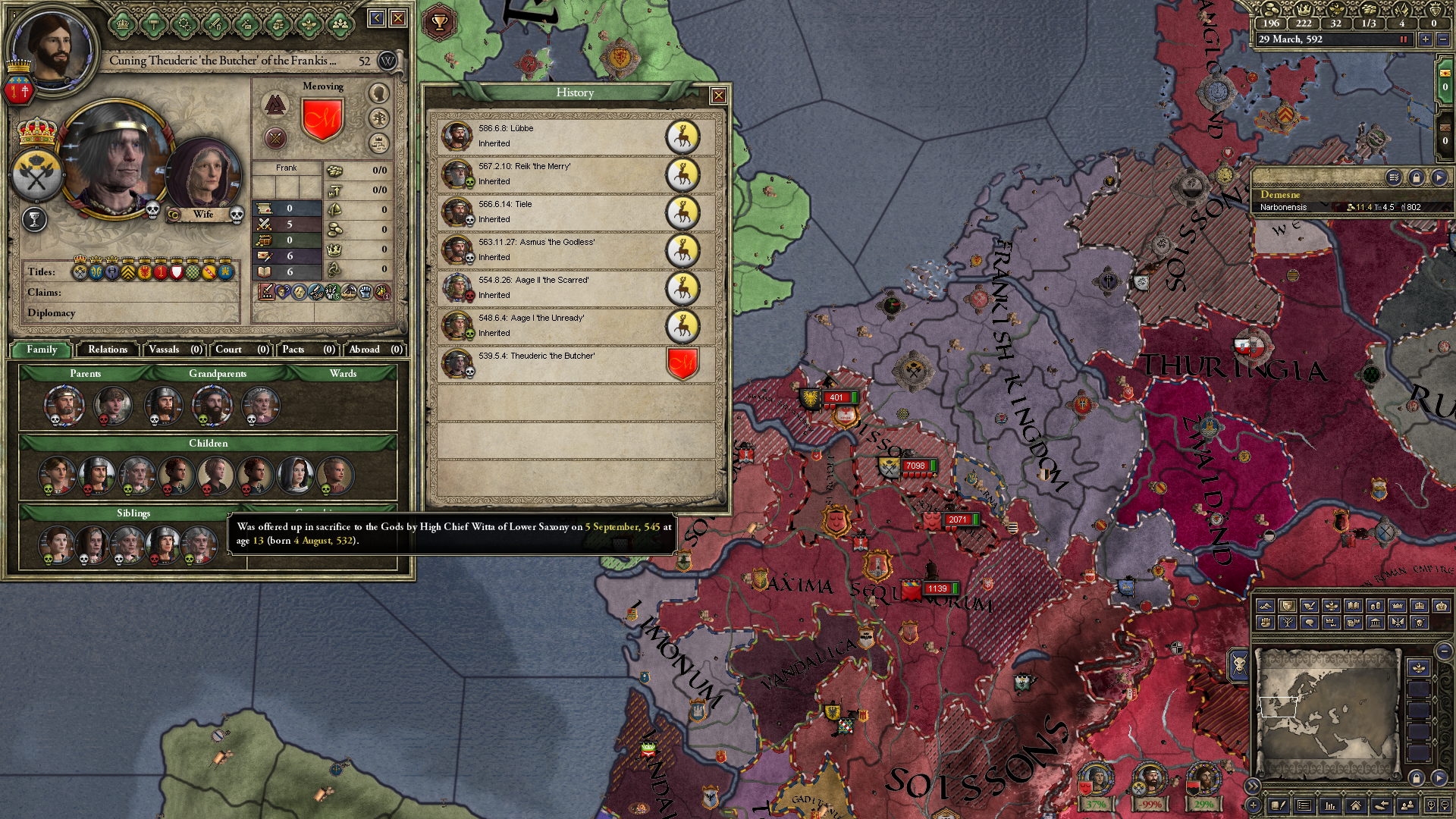 Playing as Celtic Duke in Northern Scotland, just doing my own thing, reforming the Celtic faith, uniting Great Britain etc etc. I have the Jade Dragon DLC and always put China Diplo Range on everyone because Chinese artifact collecting is usually an interesting side goal. Anyway, the Jurchen Invasion of China event goes off and they eventually take control of China. Now, I go and check the Emperor to see if anything changed, and I swear, something seems wrong... But I can't seem to put my finger on what... 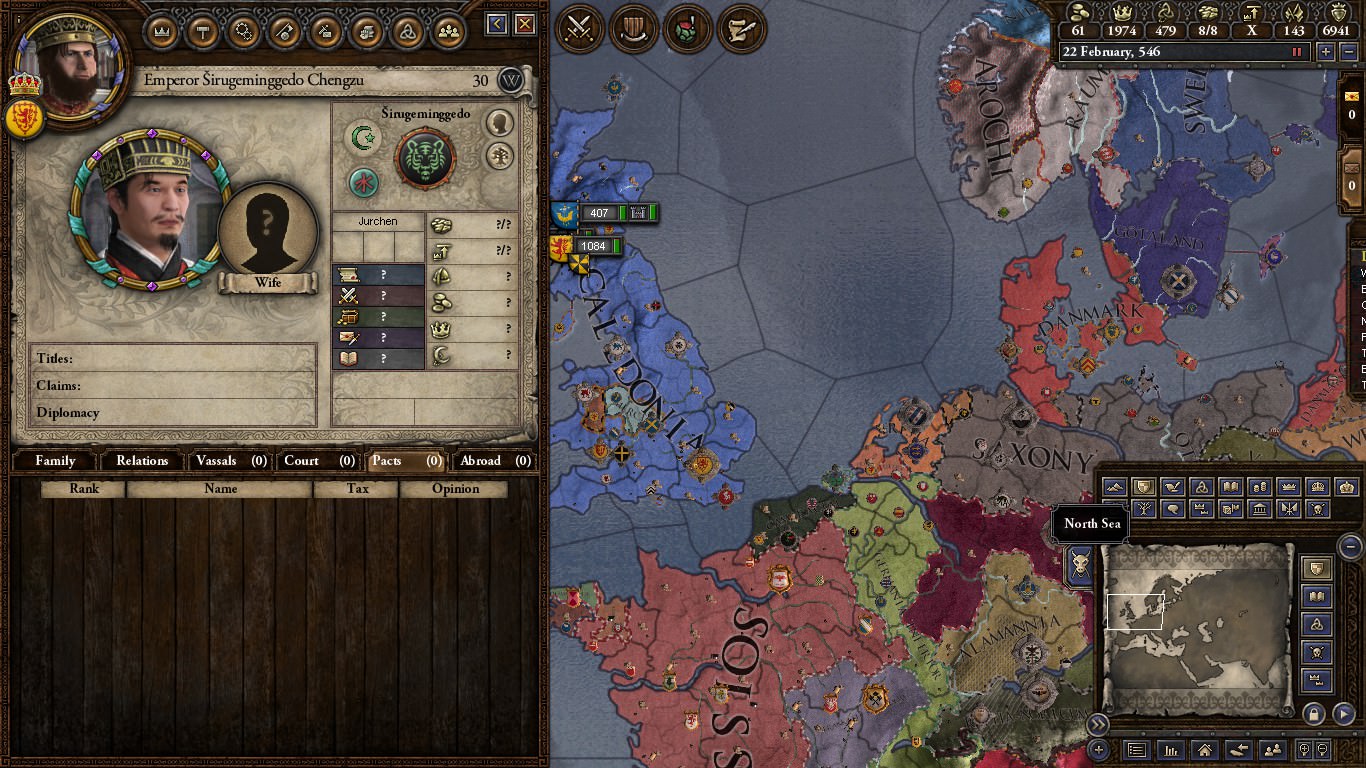 Hehe. Appears as if Islam was invented a tad more the East than in real history, and somewhat earlier
M

My WRE just got a very cartographic valentine from Jemsa. 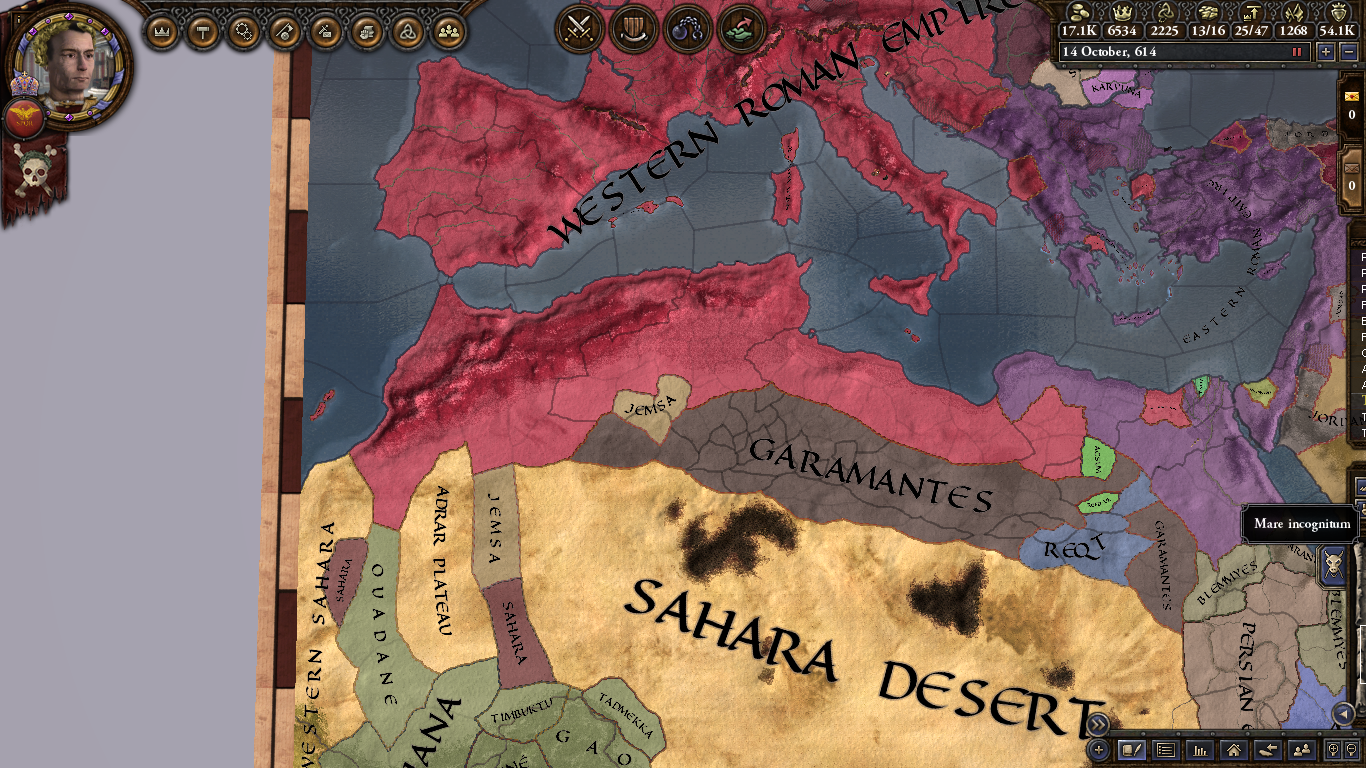 My world after just over 200 years 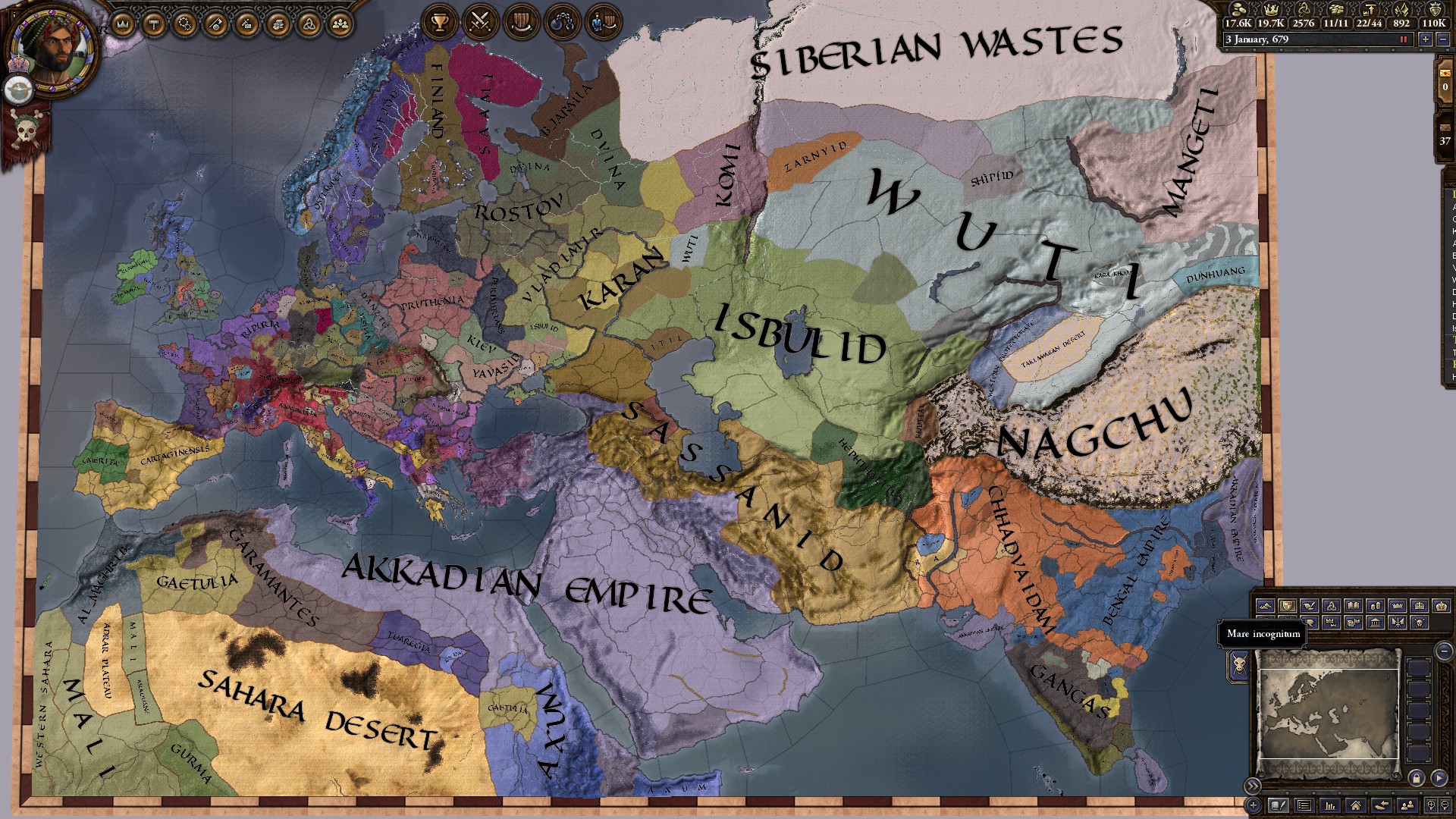 While we are on the topic of bloodlines in the mod, there is one ruler from my latest observe game with an interesting one given his title: 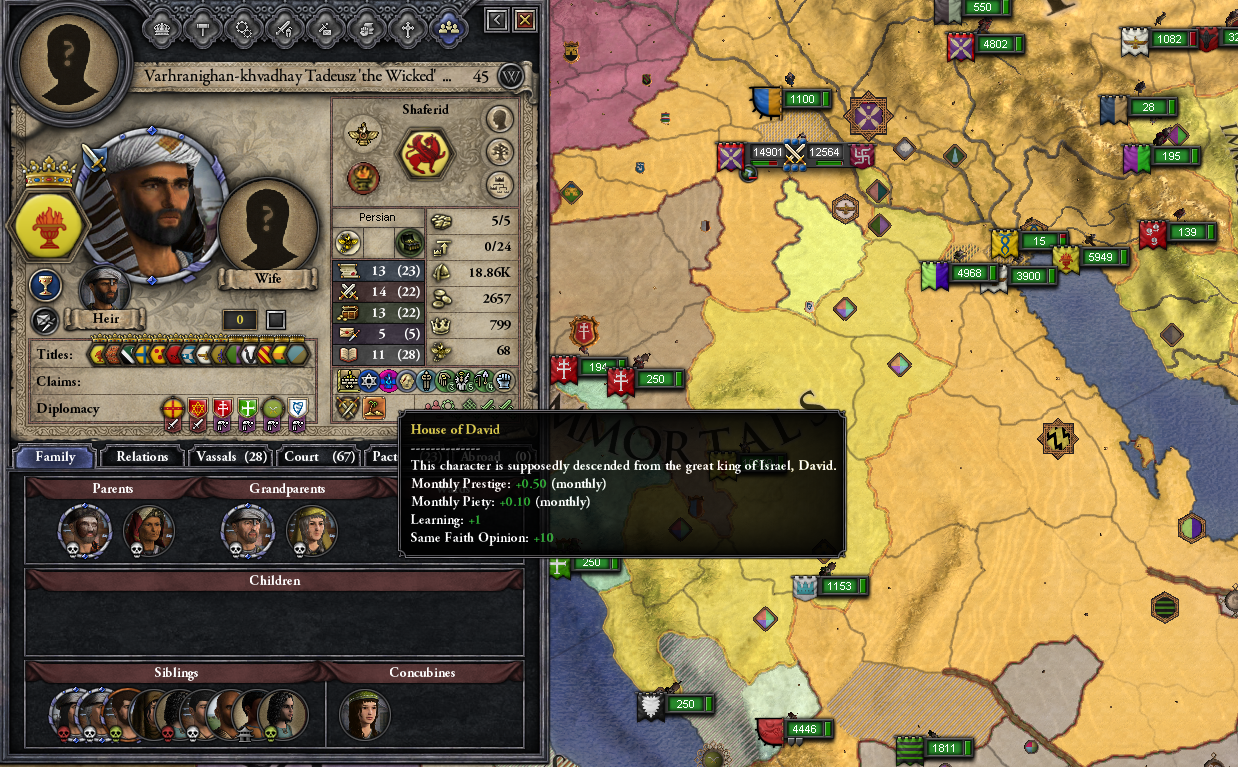 The leader of the Immortals with the House of David.
Expand signature
User Mod Index: the CK2 User Modification Index for mods, utilities and guides. Post in it to add your new mods or updates.
When the World Stopped Making Sense: developer for this CK2 dynamic & historical Migrational Era mod 476-600 (+) mod created by Enlil - 0.9.13!
Emendatio Historiae Imperatoris: developer for this Imperator: Rome historical and flavour mod.

Bumping this thread for visibility since it has disappeared. Feel free to continue to share your stories.
Expand signature
User Mod Index: the CK2 User Modification Index for mods, utilities and guides. Post in it to add your new mods or updates.
When the World Stopped Making Sense: developer for this CK2 dynamic & historical Migrational Era mod 476-600 (+) mod created by Enlil - 0.9.13!
Emendatio Historiae Imperatoris: developer for this Imperator: Rome historical and flavour mod.

You'd think the Irish are about to reform Ireland once again... 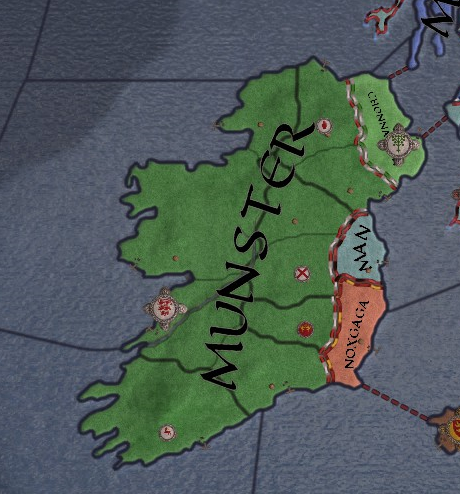 But no, it was the Franks all along! 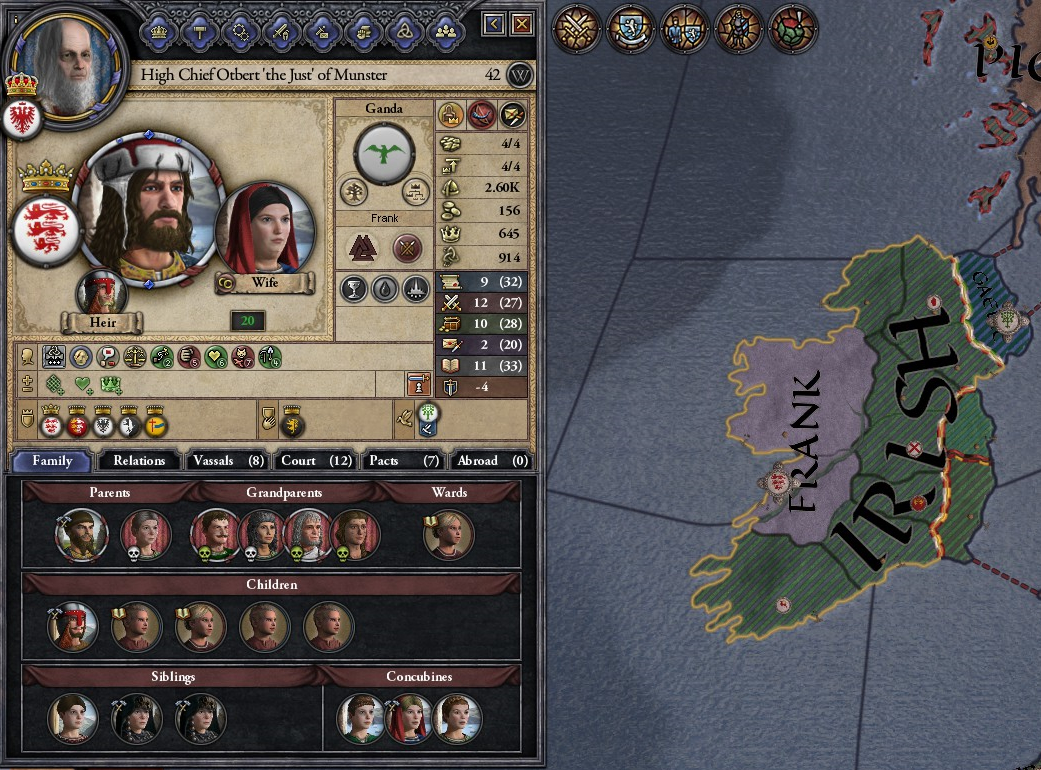 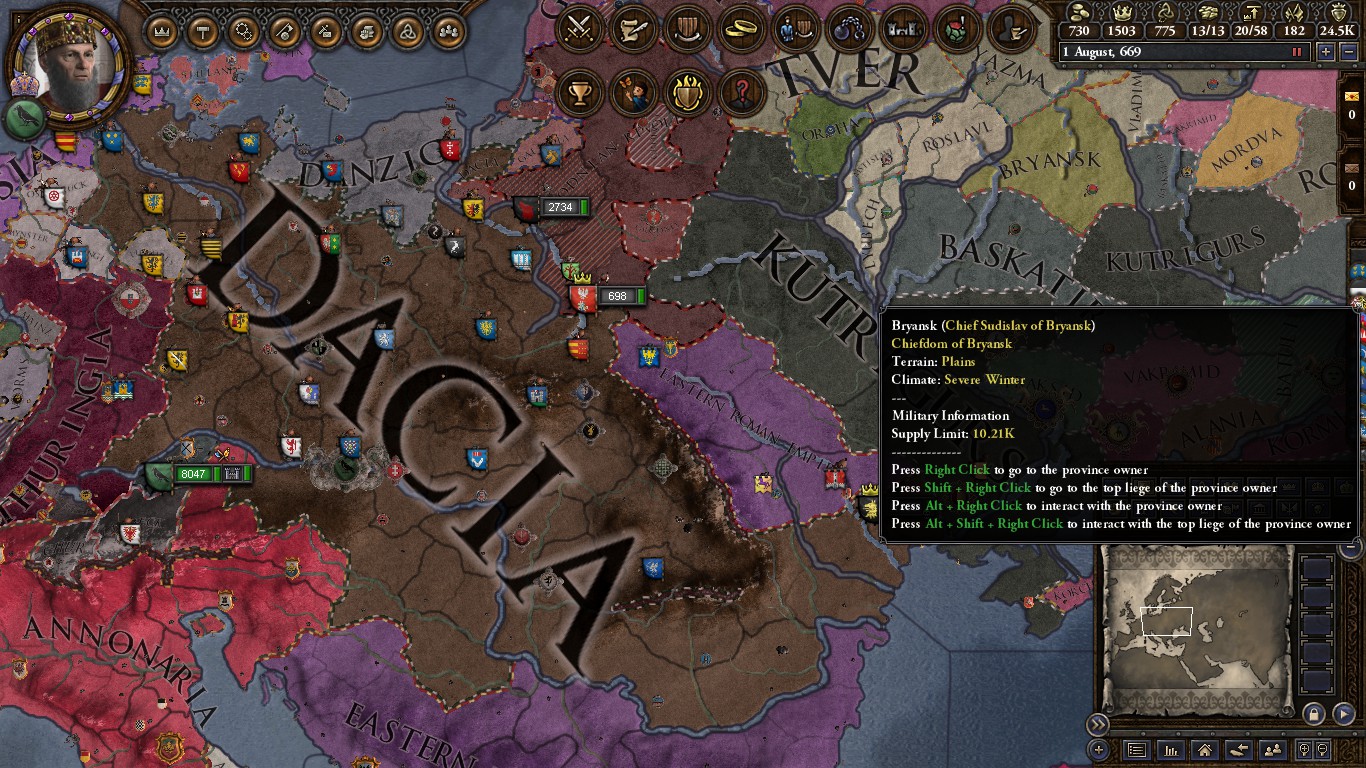 I am making a submod designed around the White Huns. However, when I tested it: 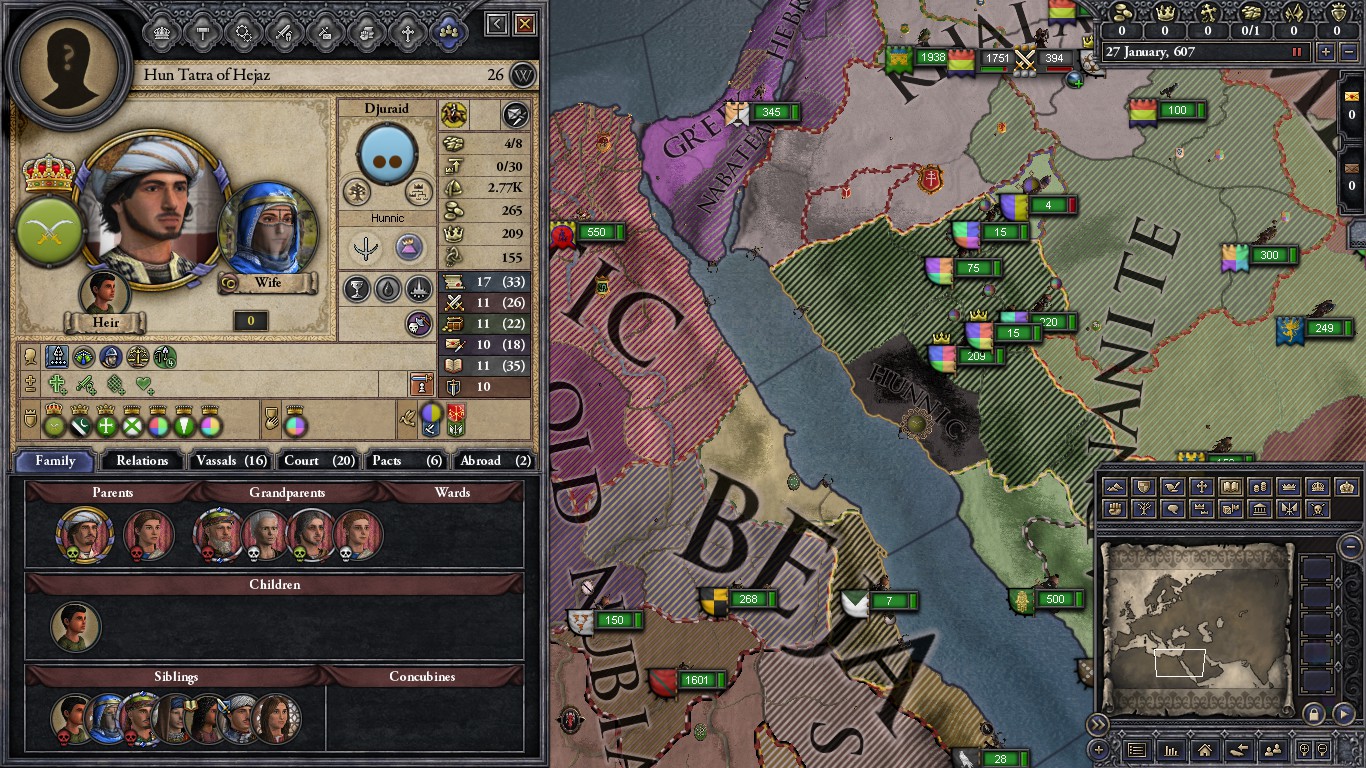 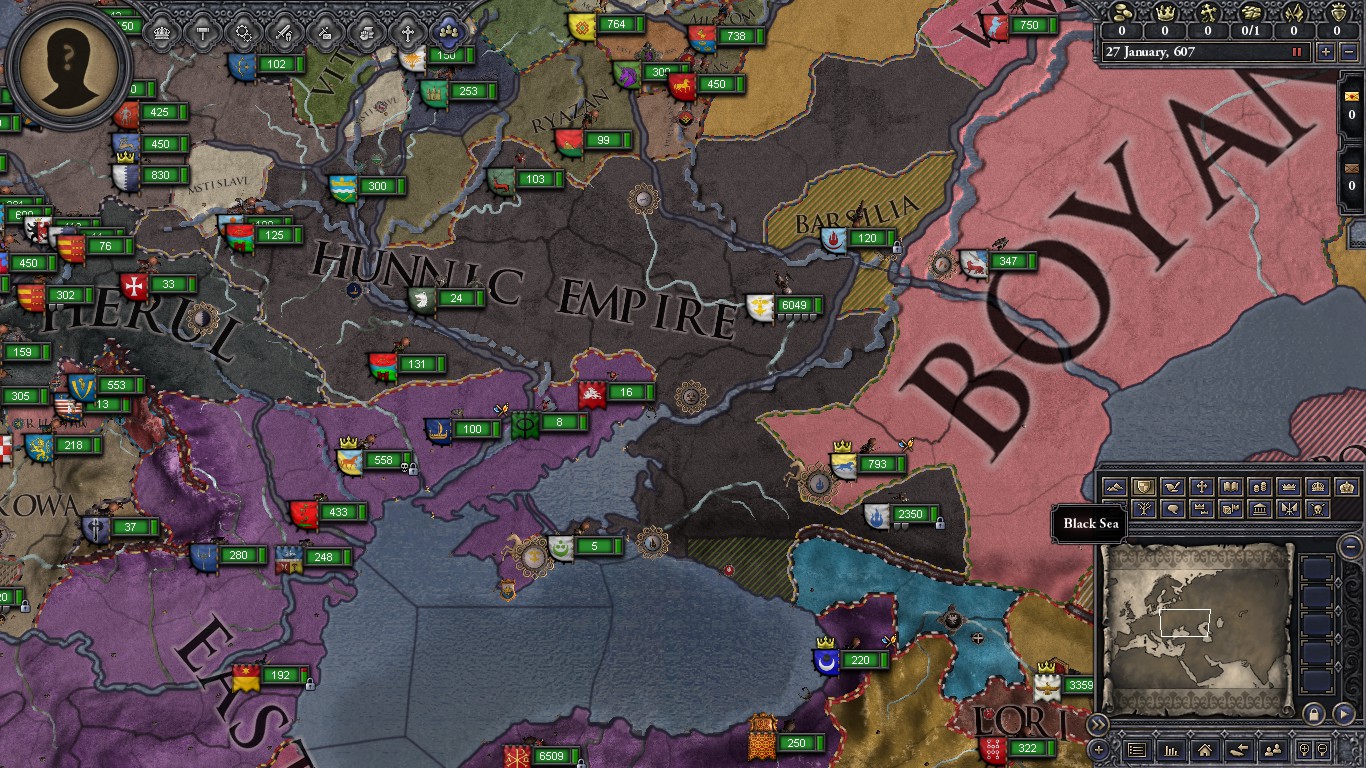 Turns out the old Huns aren't going down without a fight!
I seriously never saw them survive before!
Reactions:
D

The Sassannians full-annexed the Byzantines in my 600 start gae. Don't know how that happened, but there may be an event or special causus belli I don't know of (I'm new to the mod). I went from bordering Heraclius as Excharch of Africa (I dclared independence as Magister of Hispania) to bordering Super Persia that owned even the Baleares. Been quite busy elsewhere, and now I see the Byzantines again. But its not the old Byzies, no.

Its the Zoroastrian theocracy of the Eastern Roman Empire. They also own completely random counties in the middle of Iran.
Reactions:

Well, as ludicrous as it looks, it really like this approach to alternate history ;-) A Zoroastrian Byzantine Empire. Wow. Is only the ruler Persian or are his vasalls too? Or is the byzantine aristrocacy still there?

I'm running a narrative mega campaign beginning with this mod. Honestly, I should have mentioned this earlier, given that it's months old, but whatever.

Can @loup99 add this to the first post? Here's the link.
Expand signature
I have a megacampaign AAR as Byzantium here. This got me Best Character WritAAR of the Week for April 26. It also now has a spinoff in OT - The Demetriad
I have a poetic AAR on the Romano-Mongols here.
I have a Stellaris AAR here.
I have a CK3 AAR here.
I have another megacampaign AAR (this one as Epirus). Part 1 is here.
I also have a Victoria II AAR here.
Other AARs of mine are at my Inkwell
I was Fan of the Week the weeks of February 10th,2019, September 1st,2019, and August 16, 2020. I was WritAAR of the Week the week of November 22, 2020.

HistoryDude said:
I'm running a narrative mega campaign beginning with this mod. Honestly, I should have mentioned this earlier, given that it's months old, but whatever.

No problems, I added it.
Expand signature
User Mod Index: the CK2 User Modification Index for mods, utilities and guides. Post in it to add your new mods or updates.
When the World Stopped Making Sense: developer for this CK2 dynamic & historical Migrational Era mod 476-600 (+) mod created by Enlil - 0.9.13!
Emendatio Historiae Imperatoris: developer for this Imperator: Rome historical and flavour mod.

The Mithraic Gujurati Khaganate of Oriens. 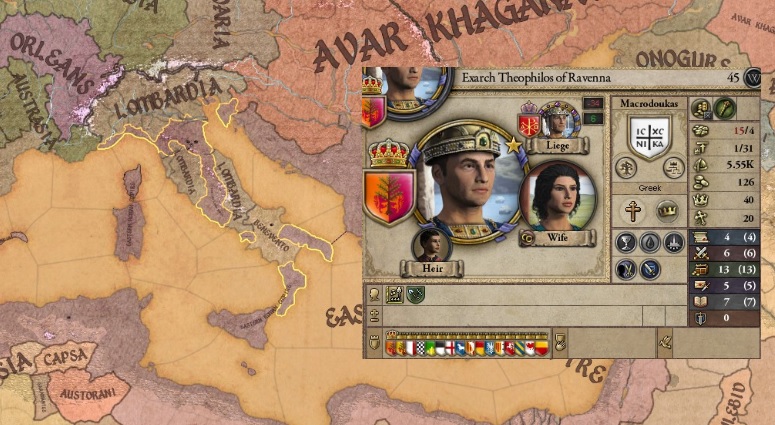 ​
Started in year 600 with a custom character, Teophilos, a greek imperial functionary sent to Ravenna to try reorganize the army and the economy in the Exarchate of Ravenna. The Longobards have been successfully kept at bay, not thanks to the (weak) military forces of the Exarchate but thanks to the fact the Longobard Kings were so poor at managing their domains that revolts and rebellions eventually led to the collapse of their kingdom. Teophilos took the chance to push into the south, waging wars against the Duchy of Beneventum to take their fiefs one by one and restore imperial authority in southern Italy. As his power and influence grew, so did his opposers who attempted to seize power and establish in Italy their own Kingdom. Thanks to the support of his friend the Prefect of the Illyricum, Teophilus managed to defeat rebels and traitors and further consolidate his power. Even the Pope, in many occassions, attempted to force the Exarch to change the succession laws from Primogeniture to Gavelkind. The Pope was then defeated and imprisoned and, for many years, nobody dared to challenged Exarch Teophilos again.

Upon his death, southern Italy was already unified, while usurpers in the north had proclaimed both the Kingdom of Italy and the Kingdom of Annonaria, the first ruled by a roman general, while the latter ruled by a Longobard leader. After the death of Teophilos, his son Leontios took over and continued his father's campaign to reunify Italy and fully restore the legacy of General Belisarios and Narses over the peninsula. In 655, central and southern Italy (with the exception of Sicily, for now) are firmly under control of the Exarchate of Italia. Leontius, just like his father, is loyal to the Emperor and the Empire. But with his power and influence growing, with peace slowly returning to Italy after a century of sackings, raiding, pillaging and destruction, will Leontious and his successors resist temptations, or will they attempt to carve their own kingdom in post-roman Italy? Who knows.. maybe one day Leontious will even attempt to crown himself Augustus. Only time will tell. 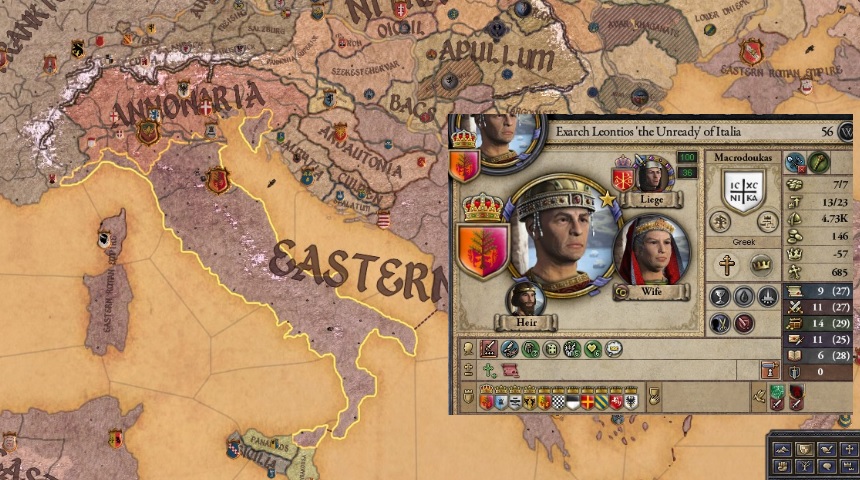 Started a game as Zeno, marched my 18k special troops towards Constantinople, got intercepted by the ERE's 4k army, got insta-killed mid-battle by Basiliskus himself.


10/10 xD
Expand signature
The Middle Earth Project Total conversion Tolkien mod for CK2
Bug Reports - Suggestions - Post Your Realm One mod to bring them all, and in Middle Earth bind them!