Who was the most interesting man in the world ?

So, I guess we all know "the most interesting man in the world" from Dos Equis

So, in history - who was the most interesting man in the world ?

The moost interesting man in the world needs to have achievement in totally different fields (and not all military - I know you guys & gals), be well travelled, and obviously having an high ratio of success.

I would put as contender :
- Francisco de Miranda : Served in the Spanish army in North Africa, then in the Pensacola expedition, then moved to United States where he met everyone that counted there, then travelled in most courts of Europe from London to Moscow wooing women and impressing men while being a writer and journalist, than officer in the Revolutionary armies of France, then moved back to fight for Venezuelan independence and became President of the short-lived republic.

- Garibaldi, a more famous example, but maybe too "military".


Learning from Prussia - a Rise of Prussia AAR for beginners - or how a forced march in winter saved Prussia from anniliation.
A Tale of French and War Crimes : A double Multiplayer AAR of Wars in America with Loki100. Includes violence against English and Indians - not suited for children.
The War of 1812 - or how I burned down Washington
Hannibal, Rome and Carthage in the Second Punic War
Join Hannibal and lead one of his units in battle in CAARnage for CAARthage !
The Yellow PAARil, a call of War_AAR

Started out as a Rhodes Scholar at Oxford University. Joining the US Army he rose to the rank of captain, completed Ranger school, and flew attack helicopters in Germany during the Cold War. Rather than join West POint as an instructor in English Literature, Kristofferson left the army to focus on his music career. Acted in major Hollywood films, recorded music with Willie Nelson and the boys. Banged an awful lot of quality tail. The ultimate Sixties Rennaisance Man.
Expand signature
War is but an extension of politics by other means
There are more things in Heaven and Earth, Horatio, than are dreamt of in your philosophy.
God bless us all, every one!

There isn't a definable most interesting man in the world. But I presume that men like Pythagoras, Plato, Epicure, Aristotle or Jesus (if he had existed) are among the top few. I presume that they validate Narwhal's criteria.
Expand signature
The Jacobin credo: art. 7. - The sovereign people is the totality of [national] citizens. ¶ art. xxv. - The sovereignty resides in the people; it is one and indivisible, imprescriptible, and inalienable. ¶ art. xxvi. - No portion of the people can exercise the power of the entire people; but each section of the sovereign, in assembly, ought to enjoy the right to express its will with entire freedom. ¶ art. xxvii. - Let any person who may usurp the sovereignty be instantly put to death by free men. ¶ art. i. - §1 The aim of society is the common welfare. §2 Government is instituted in order to guarantee to man the enjoyment of his natural and imprescriptible rights. ¶ art. iv. - Law is the free and solemn expression of the general it is the same for all, whether it protects or punishes; it can command only what is just and useful to society; it can forbid only what is injurious to it.

Leonardo Da Vinci and Marco Polo (and men like them) should feature highly. One travelled the whole known world, the other travelled all the known Sciences/Arts.
Expand signature
canonized on 11/08/2007

jonti-h:No-one's perfect
General Jac: Except Avernite , that's why I kill him every game
Jopi: I'll vote Avernite. He's a hard player to read, and therefore always dangerous.
Avernite: Avernite is a very mean person because he always comes up with great ideas

I am
But I'm not history yet.
Expand signature
Sorry who are you? Random internet person?
- Easy-Kill

I'd say objectively it has to be someone like Leonardo da Vinci and the rarity of people similar to him that's not survived the history books or did not have the same hype (a few ancient Greek philosophers come to mind that are either famous for one thing and not everything or just not famous at all).

It also depends on what everyone finds interesting I guess. I mean I find Machiavelli very interesting as well. There's also Diogenes but wouldn't really call him interesting but just peculiar. And there's probably a very fine line between the two terms when it comes to historical people.
Expand signature
= = = =
Abraham Lincoln said: "You can fool all the people some of the time, and some of the people all the time, but you cannot fool all the people all the time."
It is fair to assume that Abraham Lincoln has never been to Greece.

Tycho Brahe or Sokrates in my opinion. Cant decide
Expand signature
You ask for steak, I bring you fish. You say that you think steak is better than fish. I say that fish is much more popular than steak so obviously it's better. You say that no matter how good the fish is it can't be better at being steak than the actual steak we used to serve. I say that's just your perception and you're entitled to it but you should accept that fish is the future and that's good. You begin to say something but I stab you in the eye with a fork and run into the kitchen.

Ibn Battuta is a good contender. His travels put Marco Polo in shame.
Expand signature
"It is because people's minds are not logical and enlightened that the Empire is in disorder. If the country is not properly ruled there will be no end to rebellions. And if anyone wishes to get the knowledge of how to rule it properly he will only find it in books. That is why the publication of books is the beginning of beneficent rule."

Elon Musk. And we are fortunate enough to be alive in the first century of his life so we will get to live through many of his accomplishments. Some of us will even have the chance to date his clones.
Expand signature
Extremely dangerous to our democracy.

keynes2.0 said:
Elon Musk. And we are fortunate enough to be alive in the first century of his life so we will get to live through many of his accomplishments. Some of us will even have the chance to date his clones.
Click to expand...

Expand signature
Sorry who are you? Random internet person?
- Easy-Kill

I always think Ludwig Wittgenstein would have been interesting to speak to. I'd probably ask him to try and summarise his ideas in a way I can understand and be met with a nervous rant in Latin about architecture.
Expand signature
"When history is written as it ought to be written, it is the moderation and long patience of the masses at which men will wonder, not their ferocity"

You can all pretend it's someone else...

...but we all know it's a guy from the 20th century with a mustache.

I'd personally be interested in Gottfried Leibniz. da Vinci was already mentioned; they are kinda similar in what makes them interesting, but Leibniz was later, which in this case I think makes him actually more interesting (also, he has greater hair).

Otherwise, but that's mostly a personal obsession, in some weird way Sei Shonagon, author of the Pillow Book. She otherwise didn't do all that many noteworthy things (heck, we don't even know her actual name), but the way she seems so perfectly ordinary yet also completely alien and how her Pillow Book manages to be both simply fascinates me. I'd really like to know what kind of person she was. ^^;

...but we all know it's a guy from the 20th century with a mustache.
Click to expand...

Which of the two.
Expand signature
MAKE TRAMS GREAT AGAIN

DukeDayve said:
You can all pretend it's someone else...

...but we all know it's a guy from the 20th century with a mustache.
Click to expand... 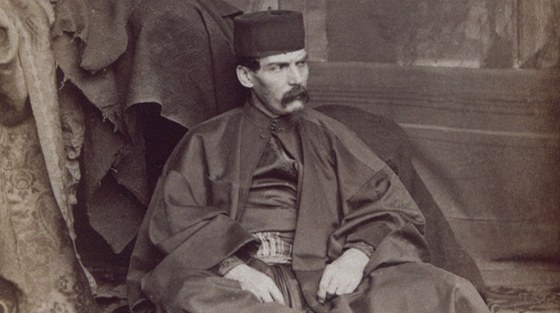 Expand signature
"For the lust of the goat is the bounty of God" - William Blake
"Nearly all men can stand adversity, but if you want to test a man's character, give him power." - Abraham Lincoln.

A sage of mickle lore

I don't know what 'interesting' means in a person exactly. Alexander the Great? Napoleon? Or someone like Socrates, Montaigne, Goethe? Byron? Newton, Tesla, Archimedes...Michelangelo...Muhammad Ali...or Muhammad?

I'm tempted to say Byron, but I find him a revolting human being. I would most enjoy a conversation with Montaigne, but I don't think his life is interesting per-se in the way the criteria was outlined in the OP. Napoleon lead probably the most fascinating life out of anyone I can think of, but I don't want to reward a butcher. I'll stick with Montaigne I guess.
Last edited: Feb 12, 2018
Expand signature
In after-time, a sage of mickle lore
Yclep'd Typographus, the Giant took,
And did refit his limbs as heretofore,
And made him read in many a learned book,
And into many a lively legend look;
Thereby in goodly themes so training him,
That all his brutishness he quite forsook,
When, meeting Artegall and Talus grim,
The one he struck stone-blind, the other's eyes wox dim.

thedarkendstar said:
Which of the two.
Click to expand...

Tojo
Expand signature
You ask for steak, I bring you fish. You say that you think steak is better than fish. I say that fish is much more popular than steak so obviously it's better. You say that no matter how good the fish is it can't be better at being steak than the actual steak we used to serve. I say that's just your perception and you're entitled to it but you should accept that fish is the future and that's good. You begin to say something but I stab you in the eye with a fork and run into the kitchen.

No. If we personify the US government as an institution, they are an unreliable and insane sociopath.

It really depends on how you define interesting. For most people it's someone who either:

Human beings have a tendency to be drawn to bad/evil things, so bad/evil people tend to be more interesting to us. Imagine two newspapers for sale - one is 50 pages of good news, the other is 50 pages of bad news. Which newspaper is gonna sell more copies? The bad news newspaper is. Especially if the bad news newspaper claims it has a 4-page spread in the middle containing newly released transcripts, never before seen, of a private phone call Hitler made in 1944. Because everybody wants to decipher that man's mind.

Jesus would probably make the top 5 as well, with his crazy new ideas about getting along with your neighbour and not being at war all the time. His ideas took a few thousand years to really be adopted by anybody, but they were revolutionary ideas that changed the world.

Nah... Obama figured out he had better approval ratings and reputation the LESS people saw and heard of him. Trump can generate worldwide fascination (usually in the form of outrage) by just saying the most basic thing. The world is definitely more fascinated with one of those two men.

I have an idea - why not compare how many books have been written (and how many have been purchased) on each "Most interesting person" candidate? More books & book sales = more fascination with the person.