What is the deal with other ships on my jump ship?

Jump to latest Follow Reply
Menu
Install the app
You are using an out of date browser. It may not display this or other websites correctly.
You should upgrade or use an alternative browser.
BATTLETECH 5455 BATTLETECH Bug Reports 3751 BATTLETECH Suggestions 1566 BATTLETECH Mod-forum 674 BATTLETECH Universe 244 BATTLETECH Fan art, fiction & creations 163 News and Updates Archive 129 BATTLETECH Multi-player 103

I don't have a game shot but I have seen other drop ships riding along my jump ship. What the deal here? On the framework of my ship jump or drop.
Last edited: Sep 29, 2021

You, the player / commander of the mercenary company, don't own a jump ship. You may eventually own the Argo, which can have a Leopard class DropShip attached, which is what it used to deploy 'Mechs to the surface for missions, but even the Argo cannot jump between stars, and must connect to a JumpShip to do so.
Toggle signature
1200 Days - Gramps' run at a Kerensky rated career | Gramps' run through the Hyades Rim campaign

Wolf746 said:
I don't have a game shot but I have seen other drop ships riding along my jump ship. What the deal here? On the framework of my ship jump or drop.
Click to expand...

Exactly as @MarkDey says, part of the immersive realism of BATTLETECH’s #MercLIFE simulation is that we must pay for passage on Commerce JumpShips.

What would have taken the sim to the next level (though painfully) would have been if Commerce JumpShip Captains sometimes were unavailable… extending and wasting our time at Jump Points. Like, 99.9% of my fellow gamers would have hatred this aspect of the sim, I would have loved the realistic Friction it provided. :bow:
Toggle signature
PDXCON 2019 ~ MechWarrior of the Year
If you know the enemy and know yourself, you need not fear the result of a hundred battles ~ Sun Tzu
Join your fellow BATTLETECH gamers in a Tournament, IWS League, Friday Night Fights, Command Academy and BT Discord.

Okay the jump ship I use in the game that helps jump you from system to system
Last edited: Oct 4, 2021

Wolf746 said:
Okay the jump ship I use in the game that helps jump you from system to system
Click to expand...

Right. It's like a bus. Those are just other passengers on the bus going to the next system.
Toggle signature
1200 Days - Gramps' run at a Kerensky rated career | Gramps' run through the Hyades Rim campaign

Just wanting to clarify what are you specifically talking about with images.
the following image has the in game JumpShip with the Argo attached to it. 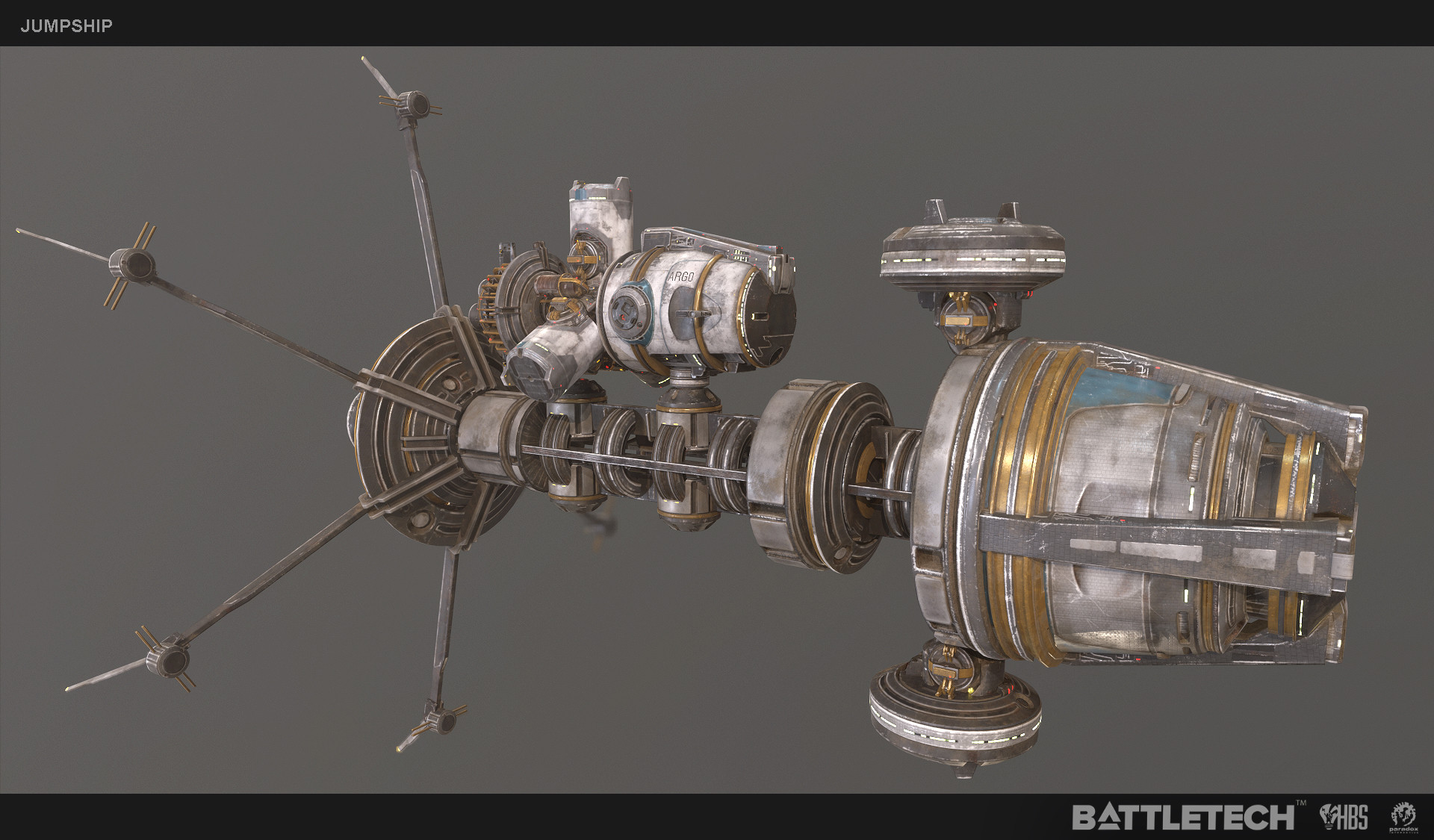 This is a the leopard that the player starts with as their first DropShip, and then continues to use as their conveyance to the surface of the planets they land on.
(ie loading screen for missions) 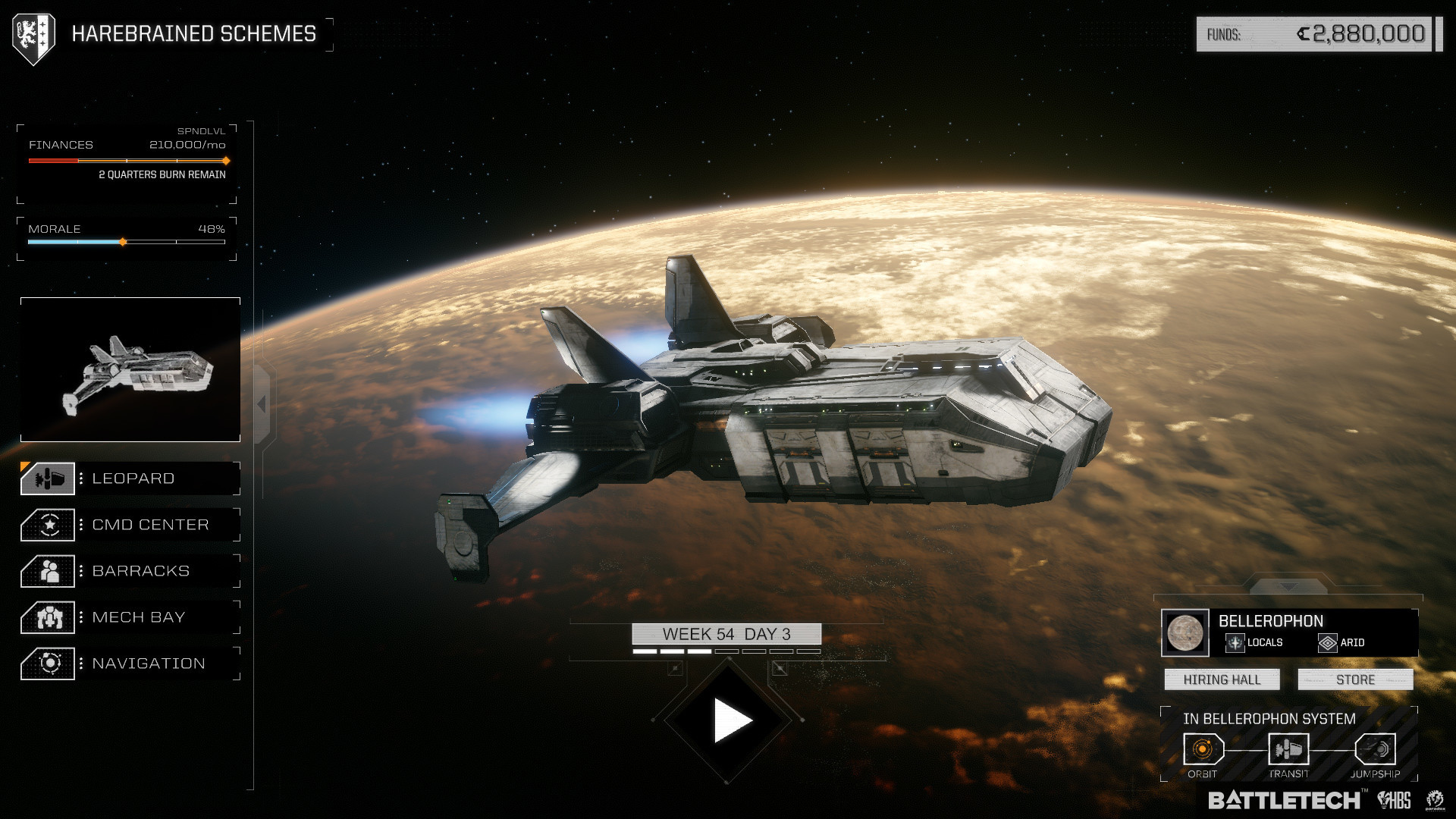 This image has a Leopard and some Union DropShips. 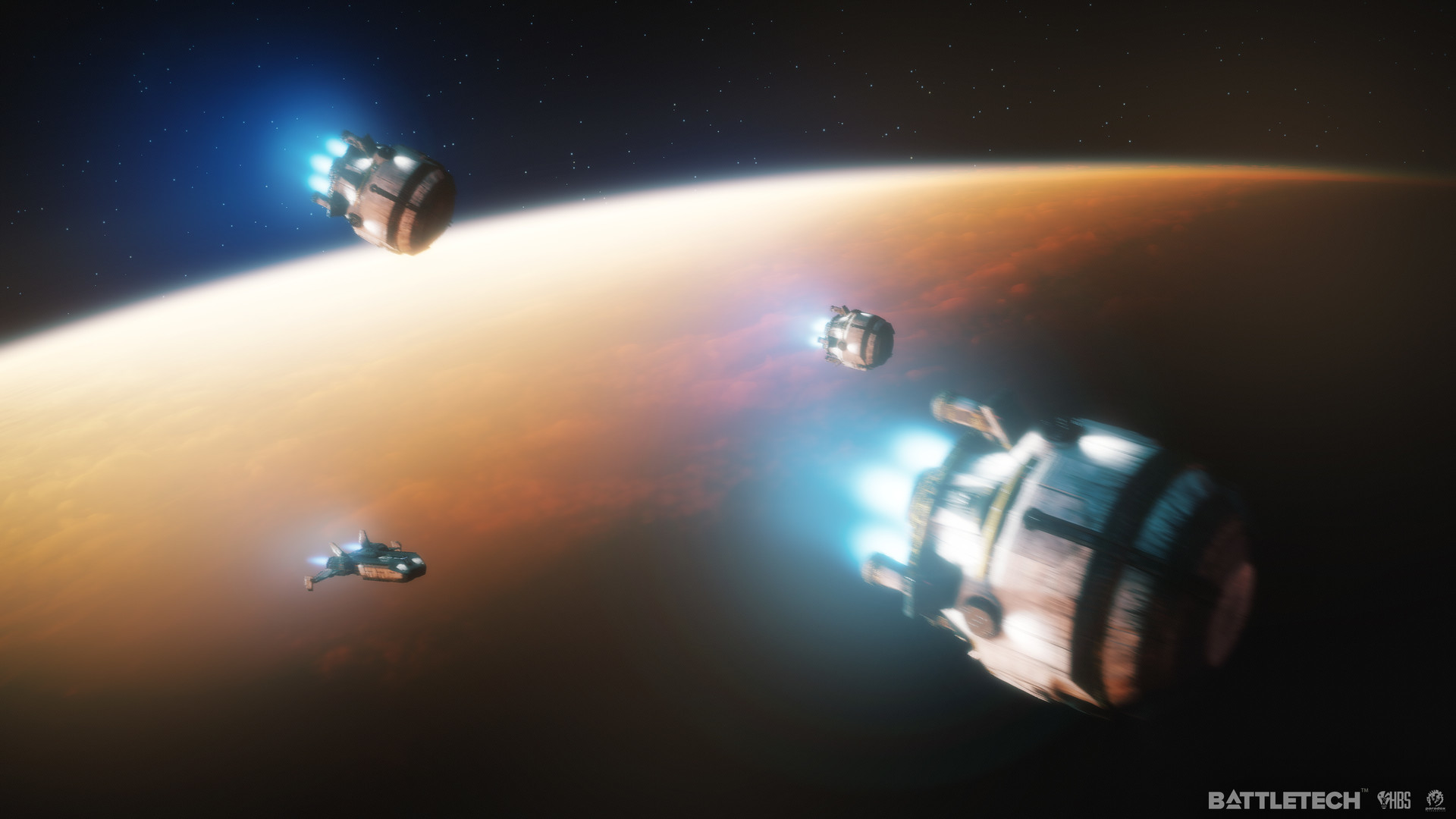 This is the Argo deploying the habitation pods that then rotate after deployment to produce gravity.
They're not DropShips, but I could see how they could be mistaken for them.

So now that the examples are out of the way do you mean another DropShip attached to the JumpShip like the first image, but there is a second DropShip attached to the JumpShip (either Leopard or Union), or perhaps you're talking about the habitation pods on the Argo. If you do mean other DropShips then, yes what MarkDey has said is correct. The other DropShips are just catching a ride from the JumpShip ("the bus" in his analogy), and you get nothing from them. They're just there to help visual worldbuilding. If you mean the habitation pods on the Argo then those are always there, and you upgrade them for more bonuses to your mercenary company.
Toggle signature
BATTLETECH Volunteer Moderator - [link]
Resident curmudgeon and fan of trivia. I like pie.
Reactions:

MarkDey said:
Right. It's like a bus. Those are just other passengers on the bus going to the next system.
Click to expand...

Worth noting that in-universe the JumpShips are practically immobile themselves. They are capable of rudimentary spaceflight in emergency but they normally simply hang on the edges of the solar system (where jumps are practical) and shuttle DropShips between systems. If they are in need of supplies themselves they are more likely to shuttle them in with a DropShip (or a smaller interplanetary shuttle) rather than moving to an inhabited planet. That's why you need to travel to the edges of a solar system with your DropShip when you want to jump to the next one.
Reactions:

The reason for this is that JumpShips are rare (depending on when you joined the BT community they are either rarer than hen's teeth - only about 2,000 across the entirety of the Inner Sphere - or just rare, perhaps ten or even a hundred times the old number), expensive, and utterly indispensable for interstellar civilization, since they are the only means to travel between stars. As such they were (of course...) priority targets during the First and Second Succession Wars, and off-limits as military targets for the Third and Fourth Succession Wars.

JumpShips are designed for one thing and one thing only: Faster-Than-Light travel between star systems, carrying a load of DropShips with them. They carry no cargo themselves, that's all carried by the DropShips. They are generally unarmed (except for some point defences against meteorites and other debris) and unarmored, and have to spend about a week practically immobile with a kilometers-wide solar sail deployed to recharge the KF drive.

DropShips on the other hand come in all shapes and sizes, and are designed for a multitude of missions; from dropping a lance of 'Mechs to landing a 'Mech regiment, from small tramp traders to massive cargo haulers, from spy ships to research bases like the Argo.

So how it works is basically that you check if there's a JumpShip going to wherever you're going (or one that can be paid to go there), then you spend about a week travelling in your DropShip from whatever planet you're leaving to the JumpShip that's sitting recharging its FTL drive at (one of) the star system's jump points. You dock with the JumpShip at a special KF docking collar that will extend the JumpShip's KF field to envelop your ship as well (practically making your DropShip a part of the JumpShip for the duration). Then, when the KF drive is sufficiently charged, the JumpShip jumps. In an instant you leave the system you're in and materialize in the system you're travelling to. The JumpShip unfurls its solar sail and starts the week-long job of recharging its drive, while you undock and spend about a week travelling to whatever planet you're bound for.

And that's it, in an abbreviated form. Two weeks, give or take, between any two planets within range of a JumpShips drive makes the galaxy a smaller place, but with the limited range of the KF drive's jumps, it still would take over a year to travel from one end of the Inner Sphere to the other.
Toggle signature
BATTLETECH Volunteer Moderator - [link]
No job too tough, no fee too high!
Reactions:

I had hoped for an expansion to the game to include other types of dropships, to deploy more than just 4 'Mechs, or possibly allowi combined arms with either a second dropship to carry vehicles or a combined-arms dropship to move 'Mechs, vehicles, and infantry. Obviously that won't happen now.
Show hidden low quality content
You must log in or register to reply here.
Share:
Facebook Twitter Reddit Tumblr WhatsApp Share Link
Top Bottom