Welcome to the Empire of Sin Forum!

Menu
Install the app
You are using an out of date browser. It may not display this or other websites correctly.
You should upgrade or use an alternative browser.
Empire of Sin 333 Beta Branch forum 9 Suggestions 161 Technical Support 26 Mods Bug Reports 795
Show only dev responses

Welcome to the official Empire of Sin Forum!

I hope you are ready to start your new criminal empire in the 1920's Chicago. Let's jump into it with the announcement trailer!


The game will release in spring 2020, for PC, Mac, Xbox One, PS4 and Nintendo Switch!
It will be a character driven strategy game, set in the prohibition period during the 1920's era. It is developed by the super talented folks over at Romero Games. We will soon put up a FAQ, but as of now we can't tease too much.

If you want more information, be sure to follow us on Facebook and Twitter! We also have a news section on the home page, and that section will be updated as we now start the journey to release together.

Talking about the home page, we have already launched the sign up campaign over there, and the first item that anyone who signs up will get is a Golden Tommy Gun, for your use in game. As we get more signups, we will unveil and unlock more rewards, so make sure to go over there and claim it now!

That must be an offer you can't refuse, right?

Lastly, we moved the speculation part that used to be here into a sub forum, so we can dedicate this space to the game!

I hope you all are as excited as I am about Empire of Sin!

My first thought was "Pizza Connection with Tommy Guns" and potential diplomacy and intrigue between clans, police and politicians.
(Alternatively more character driven and a kind of "Once Upon a Time in America" story.)

I guess this is without the pizza part and mostly about the Tommy Gun.
Curious about the gameplay.
Last edited: Jun 12, 2019
Toggle signature
Mods :
Old Building Names (Pre-1.10-building-names for CK2) ; NoShortcutsInProvinceTooltip ; No More Wikipedia Icon ; CKII-UI-Font-Mod by Morinn
CK2 Modlists: List of Mods /Guides/Utilities ; Women focused modlist : here
Deutsch CK2: German CK2 Sub-Forum
"Do not worry to mete out vinegar here and there, but don't forget to mix it with some honey"

My opinion it look like gangland. I expect better gameplay and campaign.
Toggle signature
Peace and love guys it's time to go to war.

So, is this a strategy game?? "Empire" in the title indicates as such, but I'm not seeing much strategy experience in the Romero team.
Toggle signature
PSA: A.I. is no replacement for a human opponent. Play multiplayer!!

Very excited to be an active part of this section of the forum and in the future hopefully modding it too!

Best of luck guys!
The game looks like it has a lot of potential.

I really wanted Paradox to do a game like this. I am glad that this is actually happening.
It is my hope that this game will, unlike most other mafia games, focus on the strategic elements of being a mafia boss. Recruit others, building businesses (both illegal ones and legal cover businesses for money laundering), building alliances and business/trade/smuggel connections, waging gang wars and reward your own gang members to keep them loyal, while at the same time exploiting the disloyalty of members of rival gangs to turn them against them. At least that would be my dream.
I am looking forward to hear more about that game. Therefore best wishes to the developers.
Toggle signature
Ĉiuj vivantaj estaĵoj estas denaske liberaj kaj egalaj laŭ digno kaj rajtoj. Ili posedas racion kaj konsciencon, kaj devus konduti unu al alia en spirito de frateco.

Want to share your favorite self-made empire in Stellaris? https://forum.paradoxplaza.com/foru...self-created-empires-and-biographies.1083805/

I always wanted a prohibition strat, so this is a dream come true.

If it's anything like the old gangsters game count me in. Also count me in if it's not.
Looks wizard
Toggle signature
Don't Press the O
Please support this CK Suggestion thread Player Heir
Thank You

Oh please let it be a true Paradox game, with focus on strategic depth rather than graphics and "fights". I'd rather have detailed and intriguing mechanics to work with, than "turn based obligatory fights" like e.x Jagged Alliance etc
Toggle signature
Traits:Naive Appeaser,Greedy,Wroth,Content,Slothful,Humble,Just

NFZed said:
Mine was yeah Omerta 2
Click to expand...

I suppose that says something about my age...
Sure sounds and looks like it (based on the handful screens on the homepage)

Needs pizza, one way or the other....

Might be more about the tactical side though based on this

Aardvark Bellay said:
Might be more about the tactical side though based on this
Click to expand... 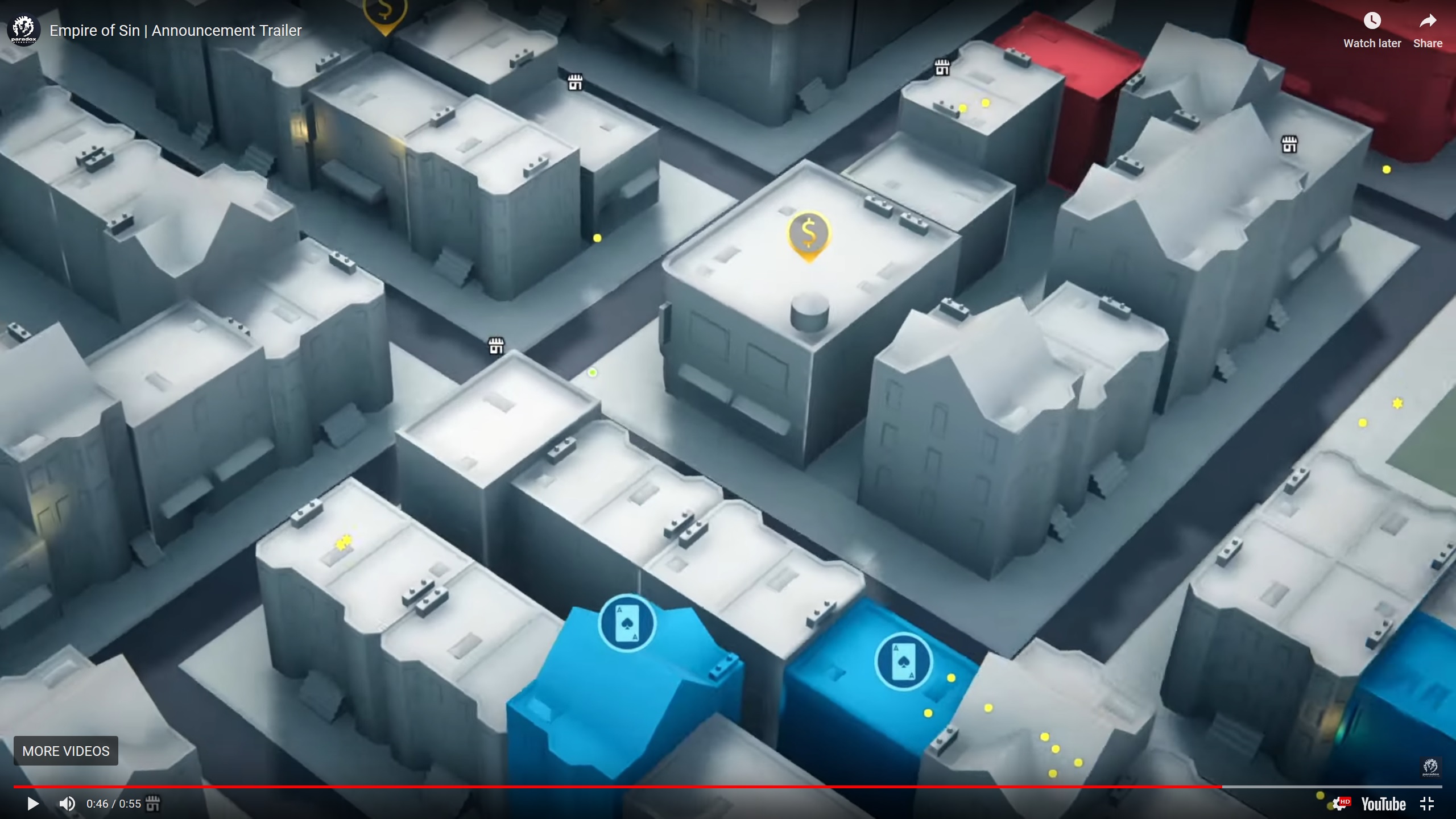 Aardvark Bellay said:
I suppose that says something about my age...
Click to expand...

I guess I am as old as you as I remember Pizza Connection also, but the tactical screen was more Omerta to me than anything else.
Toggle signature
Spying on Xenos is fun

I hope this will be as close to the good old Gangsters: Organized Crime as possible. Even today this oldie is still by far the best Mafia simulation out there and that is because it doesn't just focus on the hollywood action fighting stuff, but on actually running and managing such an organization on the strategic level in a totally open sandbox city environment. I hope Empire of Sins will take a similar approach. It would suit the Paradox strategy expertise, but this is a third party game and John Romero isn't known to me as a strategy game designer, so let's wait and see.

I was dreaming of a gangster management game published by PI for a bit now.
It looks like they're doing X-Com with gangsters, which will work pretty well.

You got the loop of management/strategy to combat/tactics and back again.

My hopes:
-I hope they have a good variety of tactical objectives (stealthy break-ins, guns blazing showdowns, plenty of short things to avoid massive slow grinds)
-I hope they will have a well fleshed out responsive world with interesting non-player factions (police, city hall, church, news, industry.. etc) with which the player can interact with and offer interesting framework in which to play out some sandbox fun.


Later Edit:
Judging by this interview, it's going in the right "systems" direction. Time will tell if the game tempo/cadence/feel will hit the sweet spot

Last edited: Jun 13, 2019
Toggle signature
~My old signature took up too much space, so I made this one.

The mafia games have always interested me but i never played them, this looks like a nice combo of management and turn based combat. The fact that paradox will be publishing this makes me very exited to learn more. If it is anything like Negru Voda suggests count me in.
Toggle signature
​

This reminds me of that old Gangsters game, not Gangland... I think it was just called "Gangsters", it's on GoG now.
It was pretty nice back then, even though I didn't understand it. But it looks great, can't wait to play it.

And the obligatory "Empire of Sin is properly a codeword for Victoria 3" line >:3c
Toggle signature

Labrynian Rebel;17134334 said:
Crusader King II: So You Thought You Were a Good Person
Click to expand...