Oh, no! There are about 85 German Divisions there and X9 Soviet Divisions retreating, but the numbers are so close that they seem 859. Lol, with such an amount of Divisions I´d be already in Moscow!
Expand signature
AAR: Weimar´s Legacy ## GM in FALLOUT: WAR NEVER CHANGES, KAISERREICH and PAZ SIN VICTORIA

Ericafaq said:
I think peoples like you,can win in 1944 scenario as Germany without cheats
Click to expand...

I am not sure if I totally understood your post, but it seems you are overrating my abilities as a DH player . I find really difficult to turn this war into a successful one, especially now that lots of divisions will need to be redeployed to Slovakia to prevent a Soviet invasion into the heart of Germany. I will still try to make those major encirclements that could save Germany,but...there are Soviets everywhere!!! Everywhere!
Expand signature
AAR: Weimar´s Legacy ## GM in FALLOUT: WAR NEVER CHANGES, KAISERREICH and PAZ SIN VICTORIA

Finally caught up and subbed! Going well. Very interesting how similar this has become with OTL, excepting the reversal of Barbarossa.
Expand signature
CK2-EU3 Converter: Quandrax

MiltonS said:
Finally caught up and subbed! Going well. Very interesting how similar this has become with OTL, excepting the reversal of Barbarossa.
Click to expand...

Thanks! And yes, I thought I would have more chance of "changing history", but it has gone very very similar to OTL.


Imperator1993 said:
This is an awesome AAR and has inspired me to write a Democratic Germany AAR of my own.
Click to expand...

Wow, that is really a great compliment, thank you very much. How will your AAR be? Mind that Mixed Mod only allows the SPD as first chance, so the start would be pretty much the same...
Expand signature
AAR: Weimar´s Legacy ## GM in FALLOUT: WAR NEVER CHANGES, KAISERREICH and PAZ SIN VICTORIA

nachopontmercy said:
Wow, that is really a great compliment, thank you very much. How will your AAR be? Mind that Mixed Mod only allows the SPD as first chance, so the start would be pretty much the same...
Click to expand...

Imperator1993 said:
Mine will focus a lot of the domestic political sphere of Germany and its rise to the top as Europe's greatest power.
Click to expand...

Nice! If you need to plan don´t hesitate to contact me, since I pretty much explored the different options before starting the proper game for the AAR.
Expand signature
AAR: Weimar´s Legacy ## GM in FALLOUT: WAR NEVER CHANGES, KAISERREICH and PAZ SIN VICTORIA

nachopontmercy said:
Nice! If you need to plan don´t hesitate to contact me, since I pretty much explored the different options before starting the proper game for the AAR.
Click to expand...

That's funny, this has also made me want to do a - if not necessary a modded one - at least a "peaceful" Germany game.
Expand signature
CK2-EU3 Converter: Quandrax

Yes, I even thought about making a peaceful one, but it gets too boring,hehe.

This weekend Ive been really busy, but hopefully tomorrow I will be able to play some more and give another update.
Expand signature
AAR: Weimar´s Legacy ## GM in FALLOUT: WAR NEVER CHANGES, KAISERREICH and PAZ SIN VICTORIA

Sorry (once more) for the delay and the double post. Im still quite busy, but I least I had some time today to play the game and hopefully all I need is to write the update, hopefully by tomorrow.
Expand signature
AAR: Weimar´s Legacy ## GM in FALLOUT: WAR NEVER CHANGES, KAISERREICH and PAZ SIN VICTORIA

But let Belgium be free afterwards

Chapter XXIII: Into the East (III)

​
The failure of the 1943 Eastern offensive did not only entail a general stagnation of the german Army, but also began to show some of the most painful shortcomings of the Wehrmacht. While the German troops were unmatched in combat, the awful Russian infrastructure network made virtually impossible to move forward in an organized way in any other terrain that the scarce Rollbahns inside the Soviet territory, and it was frequent that some cities and towns switched sides over and over again, making impossible for the forward units to maintain a firm line and a proper concentration of forces. Moreover, the transport capacity of the Reich was being tested very intensively, and although at the moment it was meeting the expectations many wondered how much it would endure the incessant movement of soldiers and equipment.


A Panzer III being redeployed by sea

​
A direct consequence of this problem was the lateness with which the recalled units were being mobilized to defend Austria and the Sudetenland from the Russian invasion, and more than once several transport trains and military convoys had to turn around to avoid capture. In some cases it would arrive to ridiculous extremes, such as the case of a total of 9 divisions initially sent to Vienna that were finally sent back to Berlin after knowing that the Austrian capital fell under Soviet control. The officer responsible for this nonsense was subjected to a Martial Court and the issue served as an example to the rest of logistics officers, who finally learned to relocate the units taking into account the possible Russian advance at the time that the troops could be effectively arranged on the new destination.

Soviet advance before the German redeployment

​
Meanwhile, bad news kept coming from the Eastern front, where Guderian's spearhead forces captured Bialstok only to be forced forced to withdraw from the town almost upon their arrival after a massive counterattack led by Zhukov. Anticipating that the result could be the same for the rest of formations which had been ordered to capture this population, the operation was suspended and postponed until the formations were fully refitted and reinforced with new recruits. Hopefully, by the time the Soviets recaptured the city the German troops would have fully recovered and could relaunch their offensive. Further south, the center of the German army resumed its operations towards Lwow, hoping to isolate the Russian divisions in Czechoslovakia and to move towards Ukraine.

Guderian had to retreat from Bialstok

​
Besides trying the incriclement of more Russian units, this new offensive was also intended to relieve some Russian pressure on the Romanians, who miraculously resisted the Soviet attacks in the western part of Transylvania. OKH´s general opinion was that such a demonstration of courage deserved the extra effort, and no one in the High Command doubted about the amazing tactic capabilities of Marshal Antonescu; in a private conversation, Wels even stated that "Antonescu is Romania". In America, the Brazilian Army successfully defeated a British invasion attempt from Guyana, in which more than 9,000 Allied soldiers would be killed in the jungles of Brazil. A desperate amphibious invasion attempt in Rio de Janeiro also ended as a tragedy for the British, who lost four transport ships and a destroyer to the Navy led by Admiral Alencar. 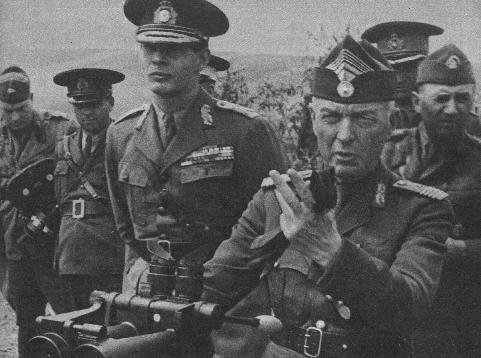 
​
In Eastern Prussia, Marshal von Blomberg continued his victorious campaign, and after the capture of Tilsit the German units launched the definitive attack against the more than 400,000 Russian soldiers stationed there. By mid-May, a series of Soviet transport ships tried to evacuate their troops, but Admiral Dönitz demonstrated once again the awesome abilities of the German U-Boats and annihilated the Russian fleet. However, it would not be an easy victory, and no Red Army commander accepted the generous German surrender offer. Fighting would last for several days when the German troops had to fight for every inch of land in an urban environment that prevented any armored assault, but eventually the Russian troops would begin to suffer from attrition and lack of ammunition, and after a powerful artillery barrage more than 40 Soviet divisions were captured by von Blomberg. It was an important victory that would have changed the sign of any other war, but in this case the Abwehr reported that more than 400 Russian divisions were still avaliable to Stalin and ready to defend from the German advance.

​
There was still a lot of trouble ahead, and the Soviet Union seemed to have an almost infinite capacity to build and locate troops. By late May, the Wehrmacht stopped any Soviet intention of approaching to Berlin or Munich and gave some respite to the OKH. Even so, the Government was preparing for a new war, one that would be fought without any weapons or shots. The next elections were dragging closer, and the various parties sharpened their knives to defeat the SPD. While the KPD did not made ​​his intentions clear regarding the war against the USSR , the DNVP presented a program proposing an honorable solution to the war against the West and the continuation of the war in the East, and the Zentrum maintained an ambiguous speech in order to win votes from all those unhappy with the current course of the wa . Finally, a new liberal party came upon the binding of the DDP and the DVP, and advertised themselves as "the alternative to the bellicose leftist SPD and the Zentrum´s permanent indecision". Chancellor Wels was facing a very fierce opposition, and this time he had no ace upon his sleeve...

You still have '36 divisions?

Mathrim said:
You still have '36 divisions?
Click to expand...

Yes, those are the "Reichswehr event" ones, that I got for free just before the war started, but that (unless my memory fails) were with almost zero strength and quite outdated: ´26 and even ´21.
Expand signature
AAR: Weimar´s Legacy ## GM in FALLOUT: WAR NEVER CHANGES, KAISERREICH and PAZ SIN VICTORIA

nachopontmercy said:
Yes, those are the "Reichswehr event" ones, that I got for free just before the war started, but that (unless my memory fails) were with almost zero strength and quite outdated: ´26 and even ´21.
Click to expand...