Menu
Install the app
You are using an out of date browser. It may not display this or other websites correctly.
You should upgrade or use an alternative browser.
Threadmarks
Reader mode
1

"The Hapsburg domain is great, from the mighty Po River to the towering Carpathian mountains. If one was to look merely on the surface, it would appear as if Austria is a realm of prosperity and power, dominating the states around them with fearsome armies and outstanding economic strength. 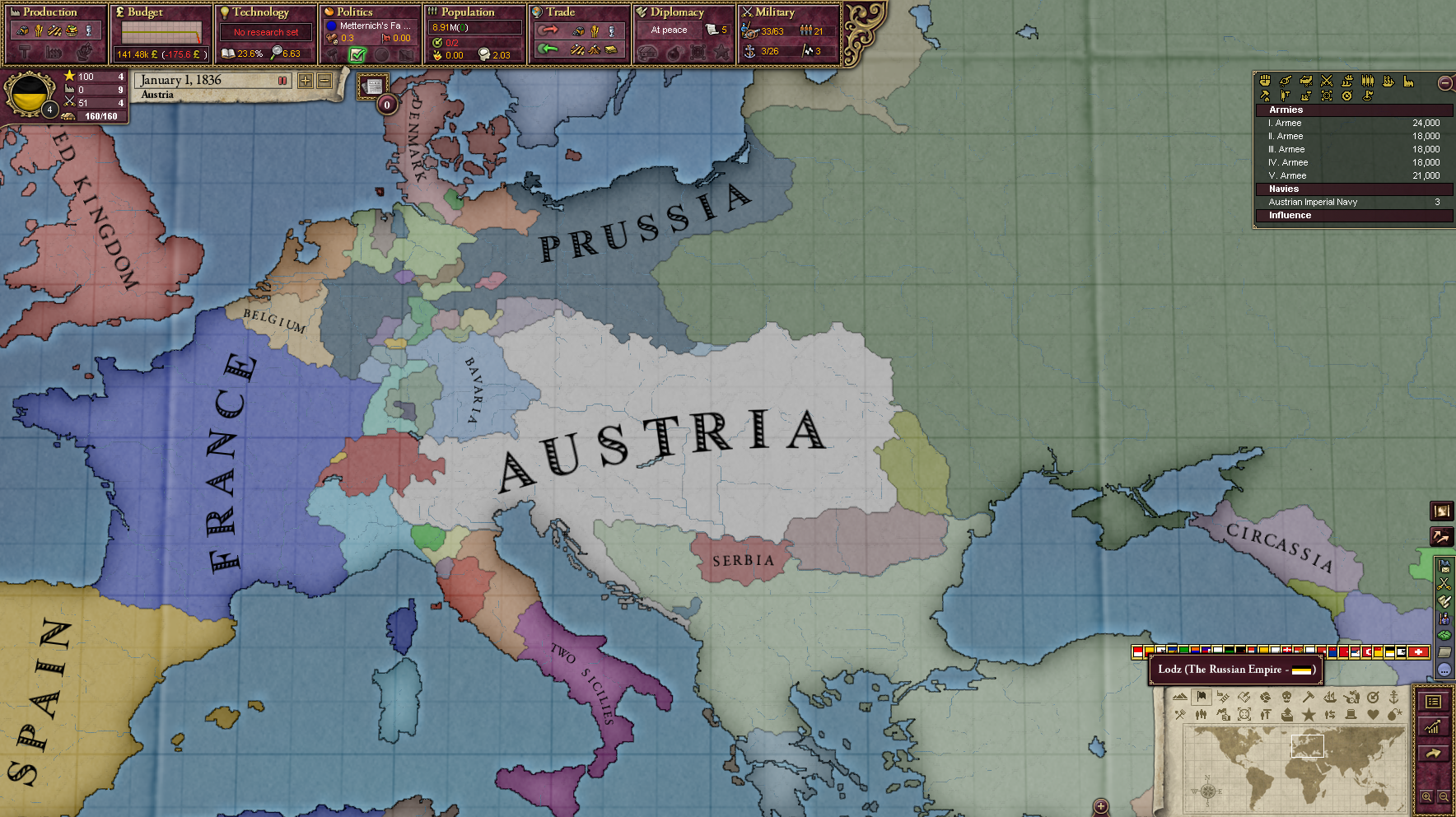 Venture deeper, however, and the tensions inherent in the Austrian state reveal themselves. In the Carpathians and the Sudetes, mistreated cultures stir the pot of rebellion, while the upstart kings and princes of Italy yearn to liberate their countrymen in Lombardy and Venice. 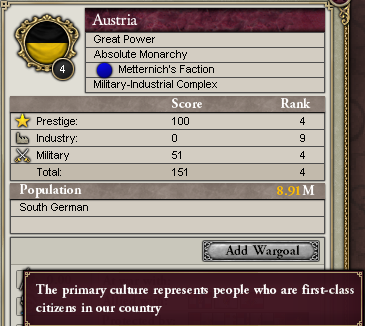 All will sacrifice much to see their goals accomplished, and it is a matter of time before they strike: or we strike first.

Austria does not only suffer from great ethnic tensions across the nation, but many other internal issues cannot be overstated in their importance; chief among them, the unfortunate literacy rate of the Austrian populace. Merely 23.6% of the population is literate, and improving this will take years, if not decades. As of now, Austria will quickly fall behind our rivals in technological prowess; namely, the Prussians, with whom we have been locked in a struggle for power for centuries. If we cannot rectify this state of affairs, Austria will not make it to 1900. 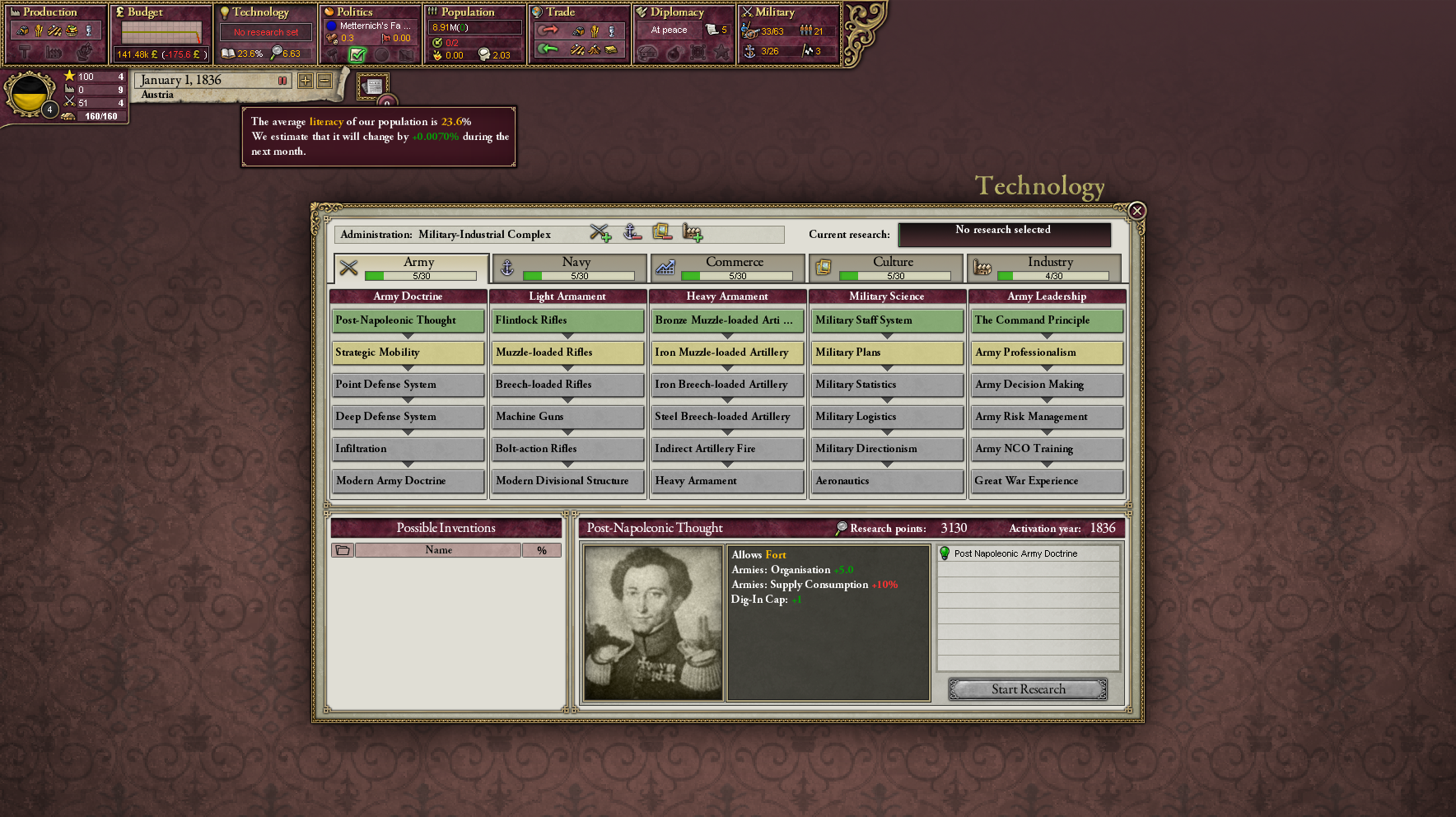 But all is not lost. We have a great nation in our hands, we have great people in our hearts, and we have the drive and will to succeed, despite all that lies in between. I believe Austria will either rise to unmatched greatness or crumble into the abyss. The State Conference, and you, in particular, are entrusted with the greatest of tasks; ensuring that in one hundred years, our descendants will speak of us as the saviours of the nation." 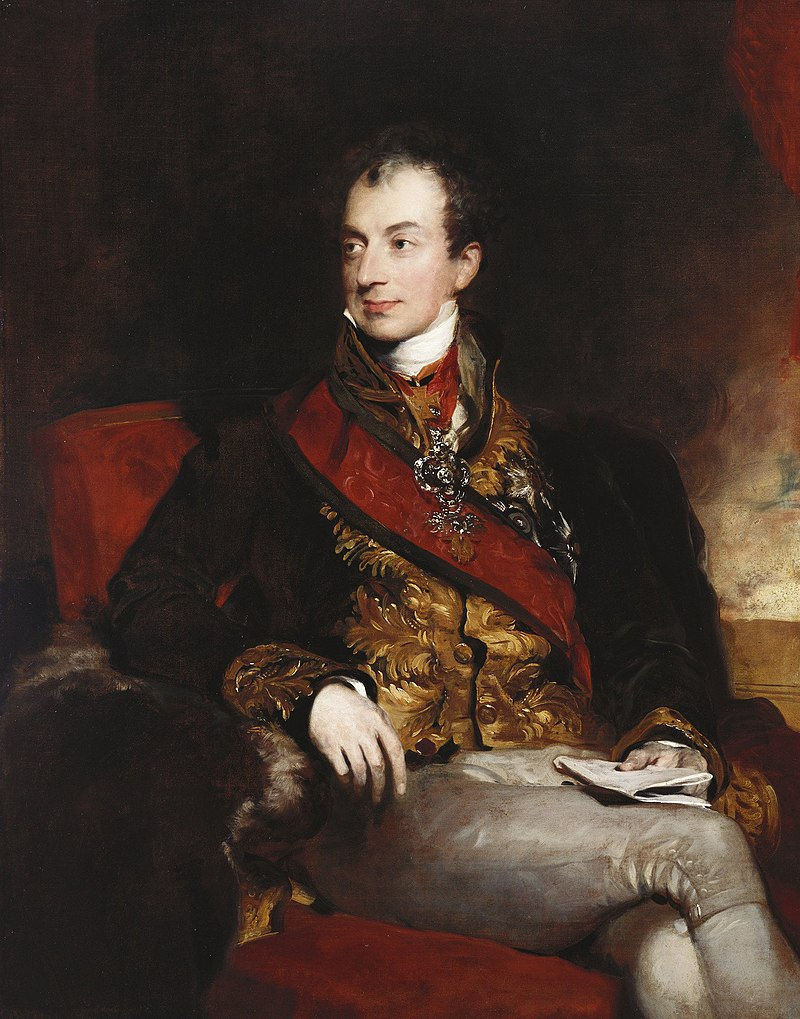 Toggle signature
"You are to be commended again, little knife."

So, welcome to Viribus Unitis - The Austrian Empire: my new AAR that I will actually maintain this time.
I'll try (key word try) to post once a week on the weekends; if there will be any big breaks, I'll make sure to let you guys know.

I have never played as Austria, either in Vanilla, HPM, or HFM, so this is sure to be a fun AAR. Incompetency may not make me look good, but it's historically accurate
Toggle signature
"You are to be commended again, little knife."

This will be intresting the watch, Austria is one of those countries of note that can always be something, but just never are and I hope you manage to steer the nation into something great. Best bet though is to get a hold of more of your one accepted culture IE South German somehow to help serve as more core forces to suppress the other ethnic groups.

Would also not recommend any invasion of Northern Italy as you dont need to make a Hungary problem 2.0 with North Italians always rebelling.

Don't often see Austrian campaigns. Will keep an eye on this one!
Toggle signature
⋆ ⋆ ⋆ A PEOPLE'S HISTORY OF THE COMMONWEALTH OF BRITAIN ⋆ ⋆ ⋆
Echoes of A New Tomorrow: Life after Revolution, 1925–69 ⋆ After the Echo: Crisis and Renewal, 1969–93 (Coming 2021!)

Austria has great potential, especially in HPM. Will the Habsburgs rise to dominate Europe once again, or will the empire fall apart at the seams? I'm looking forward to finding out!
Toggle signature
Suum Cuique

Austria is always fun. Will be watching.

Fun! Will be keeping an eye on this.
Toggle signature
Cora (she/her/hers)

With the initial overview phase over, the great Austrian nation may begin taking its first steps towards becoming a truly modern power. It begins by stabilising the finances: taxes on all strata of population are raised to exorbitant heights in order to pay for public education programs and creating a more efficient bureaucracy in all corners of the vast empire. Taxes alone cannot achieve this goal, so military salaries are cut down severely to the minimum allowed by Chancellor Metternich; this will result in lower enlistment in the army, of course, but it is an acceptable compromise. 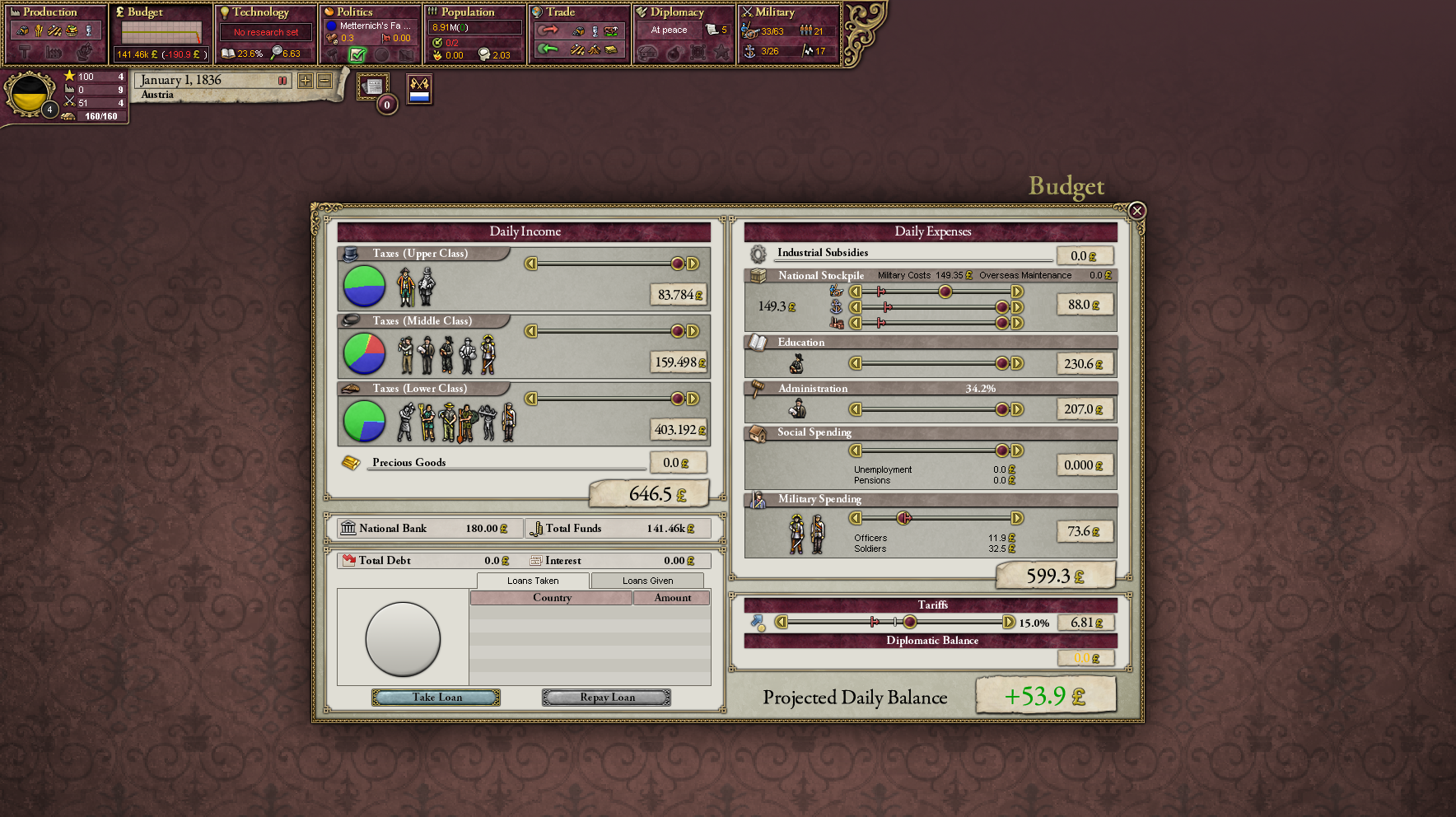 With the rectification of the dreadful Austrian budget, the State Conference turns its watchful eye towards the technology and literacy of the nation. As of now, Austria is on par with their neighbours, but this will change, as Prussia and France quickly outpace the illiterate Austrian populace.

"Untold thousands of geniuses are prevented from furthering the glory of our nation simply because of their poverty and illiteracy; although Austria is a nation of scholars and arts, it is worth nothing if they cannot utilise their strengths", Metternich states, and the rest of the Conference acquiesces. Development into further political thought begins, and something truly pivotal starts: 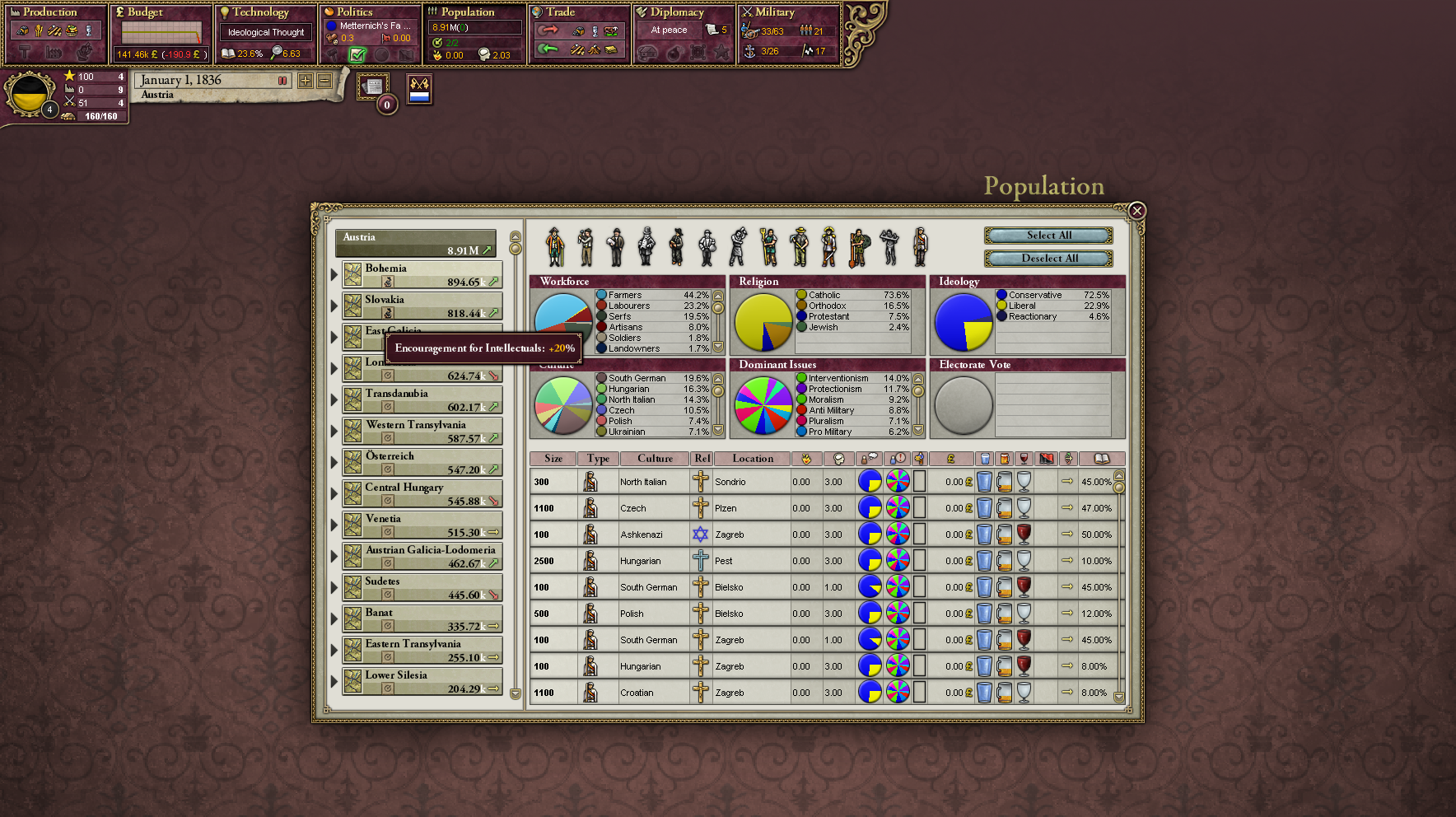 The highest population areas of the Empire are focused in a powerful effort to raise literacy rates. Teachers for all types of subjects, from basic writing to complex mathematics, come from the corners of the world to Bohemia and Nitra. The recently-fixed budget, as seen previously, accomodates this great shift in policy, funding the new educational efforts with all the money required and more.

In addition, diplomats are sent out to Austrian-aligned states to ensure they remain friendly to the Emperor Ferdinand (assisted in ruling by the State Conference), as opposed to the Hohenzollern Friedrich Wilhelm to the north. Saxony in particular is given attention, as Prussia has invested many thousands of thalers into their infrastructure, and they may slip out of Hapsburg grasp. Like a tree, it may die if not pruned properly; the rot and decay must be removed in order to survive. 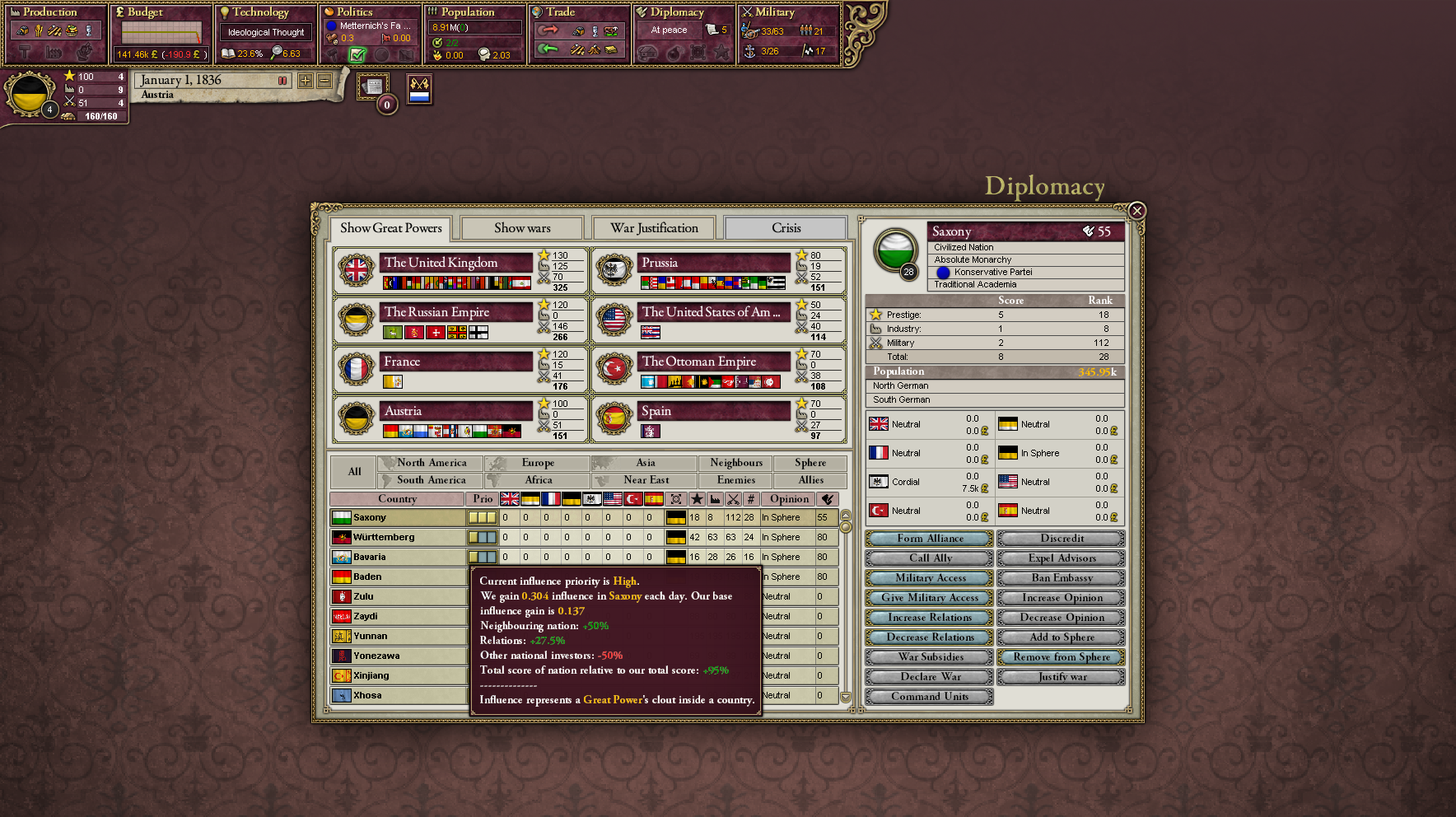 6 January and the Grand Duchy of Baden requests an alliance with the Austrian Empire. This is accepted, and similar alliance requests are received from Wurttemberg, Saxony, and Bavaria, all of which are also accepted. One offer that is declined is the City of Krakow's: Austria does not bother with useless communications. 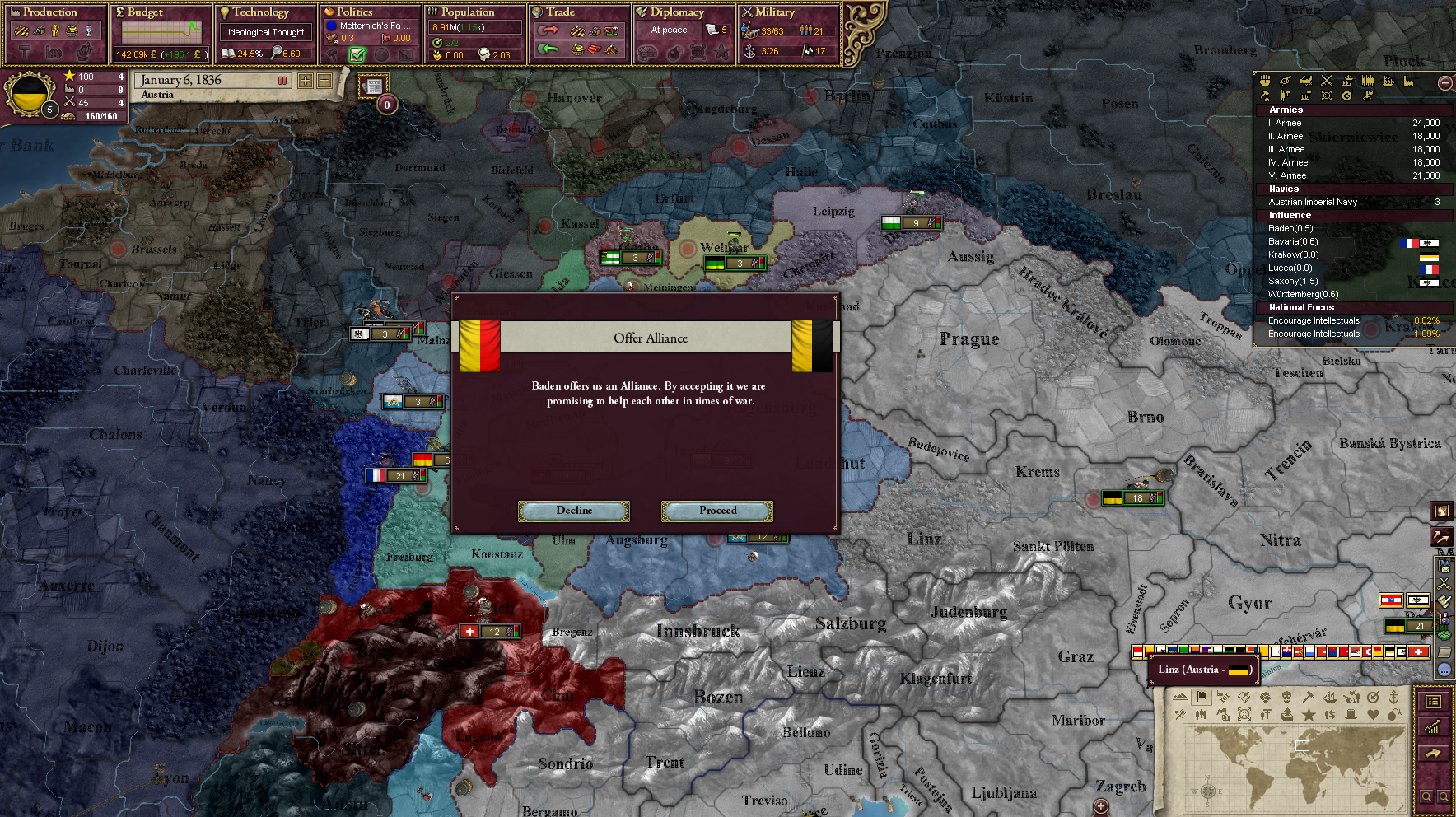 At the end of the month of January, Croatian Chartists hold a rally in Split, seeking democratic elections and the right to vote for every male over the age of 21 in a secret ballot system. This is unanimously agreed upon to be a great danger to the Austrian nation, and they are crushed. 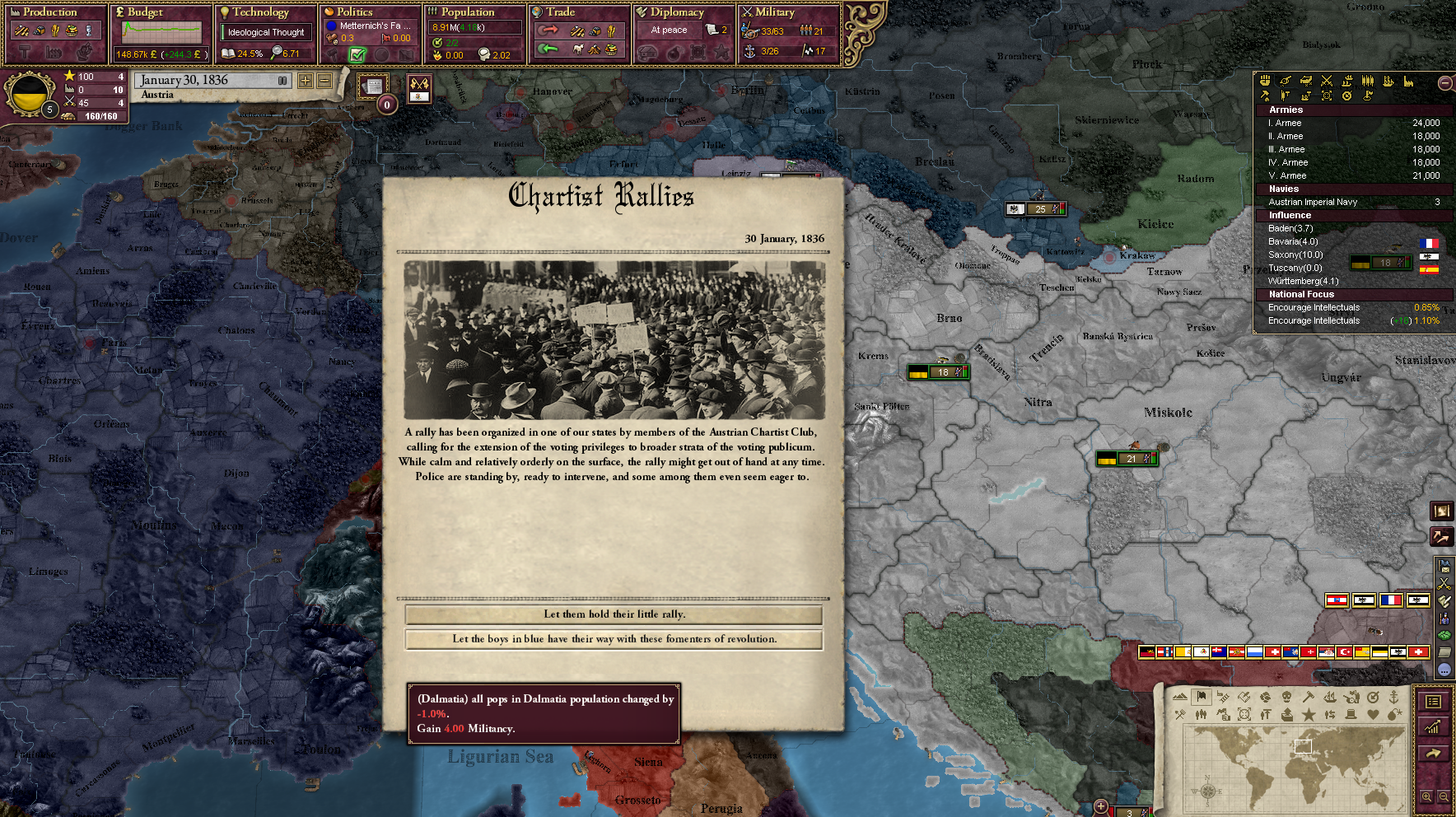 In a similar fashion, shortly after the destruction of the Chartists, a young Slovene revolutionary performs a speech in Triest, urging for action and the creation of a free and united Slovene nation, free from Austrian dominion. Once more, he is considered to have committed a grave crime, and is put to death. His final words ring out as he dies:
De bi nam srca vnel za čast dežele,
med nami potolažil razprtije,
in spet zedinil rod Slovenš'ne cele! 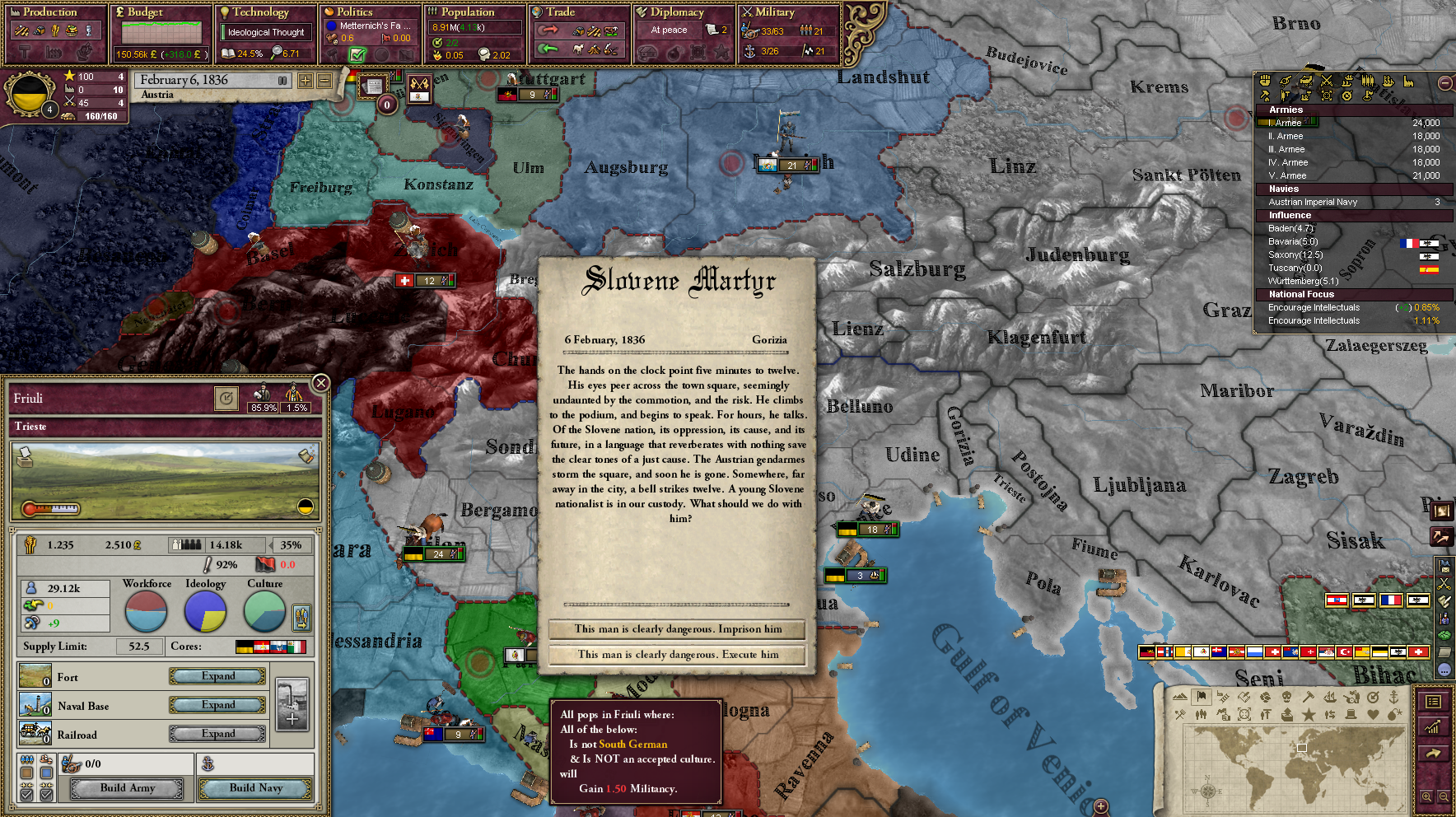 After two months of new finances, Chancellor Metternich again revamps the budget after outcry from militarists in the government. The large +350£ budget surplus is used to pay for a full national stockpile for the Army, along with raising army salaries back to normal due to fears of mutiny. 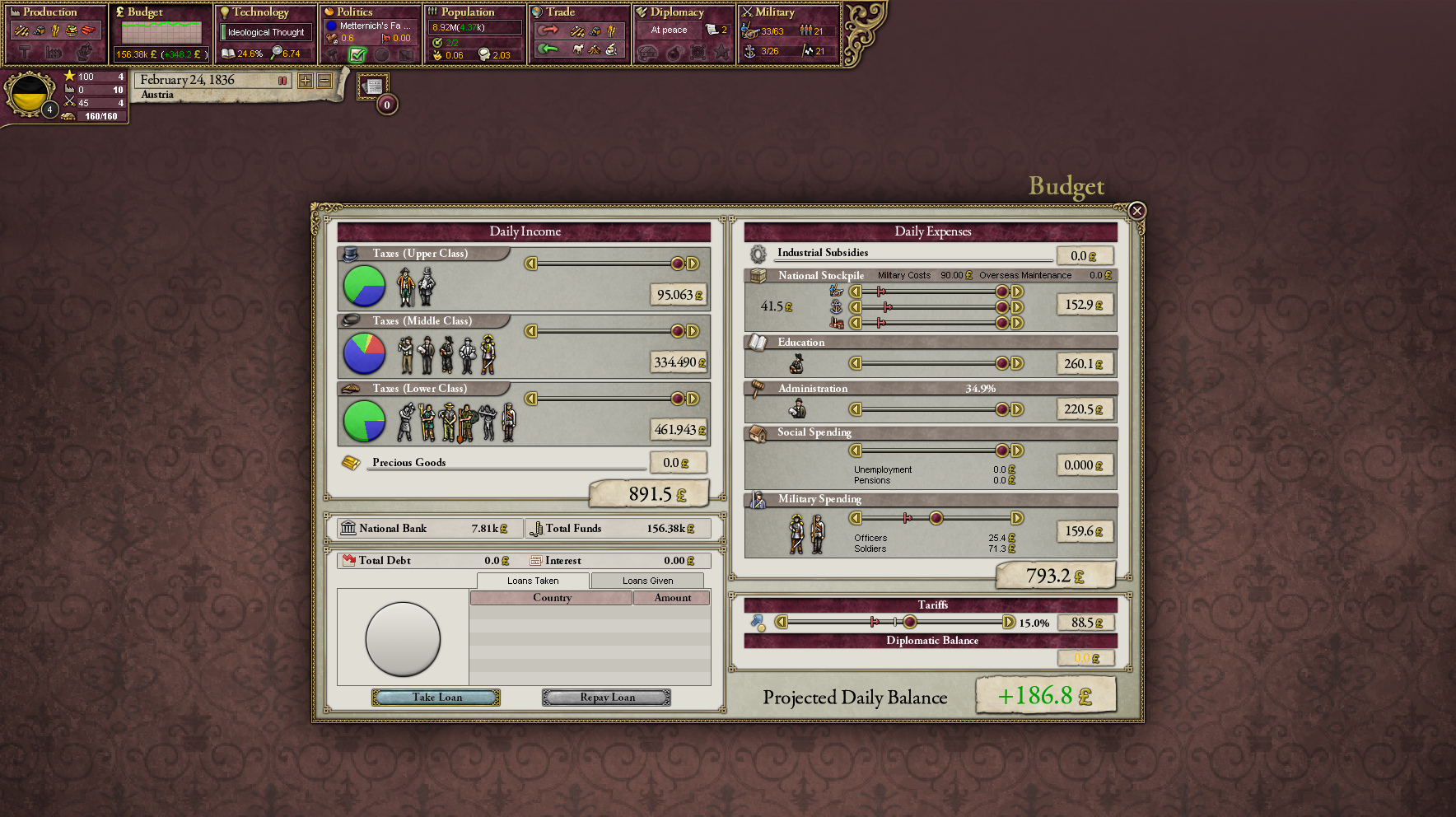 In order to counteract strong Prussian influence in Saxony, a steel factory is constructed in Leipzig as an act of goodwill and an investment in the Saxon economy. Far beyond a simple gesture, this act should allow the Austrians to exert further soft power in the crucial lynchpin state of Saxony. 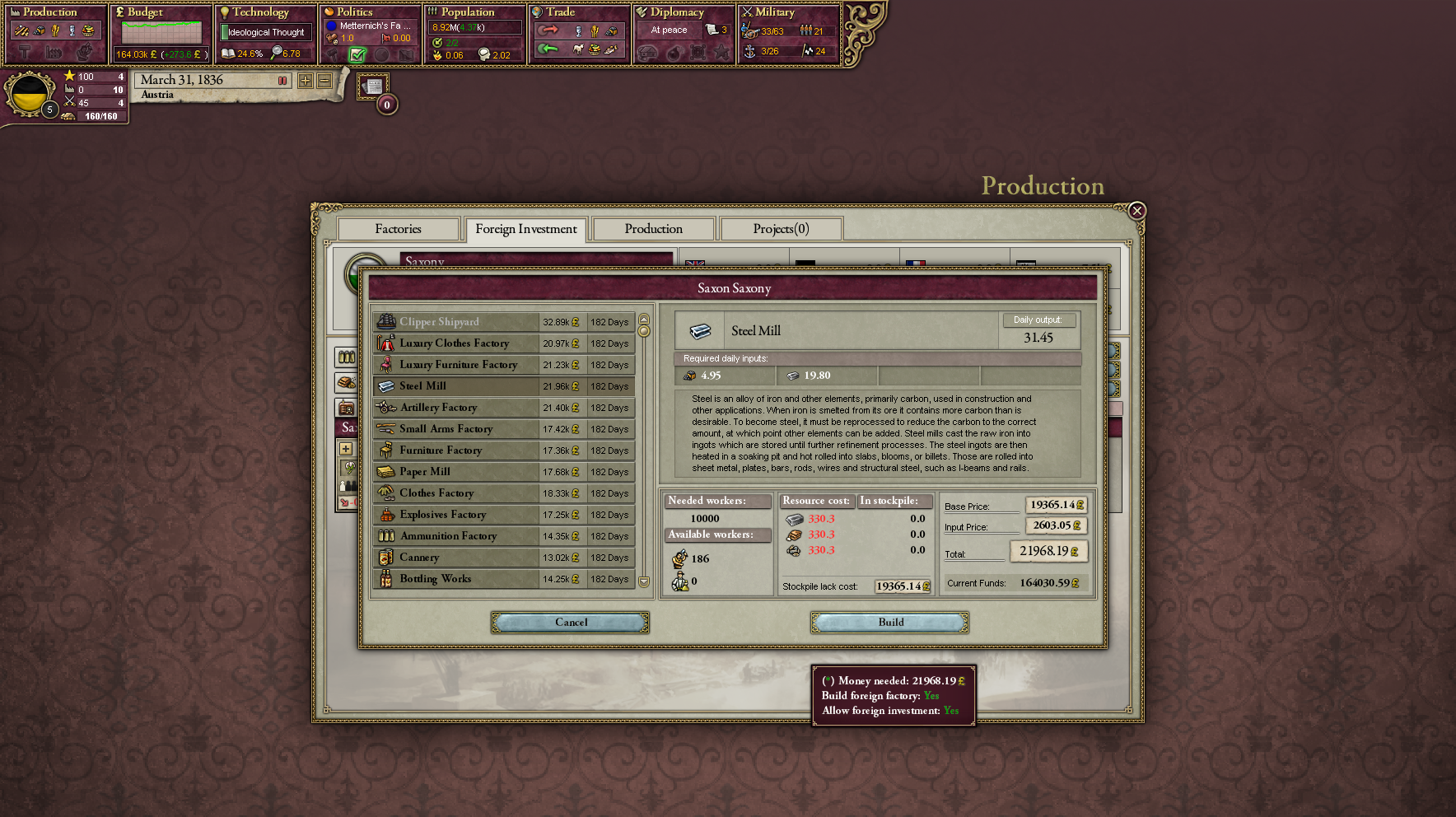 June marks a large breakthrough in Austrian politics, as Metternich is able to force an expansion of the army through the government. This expansion calls for the III. Armee, led by Hermann von Heß, to gain several artillery batteries, increasing their firepower significantly; although this adds extra strain into the III. Armee, requiring many more men to supply and tend the batteries, the gain is greater than the negatives. 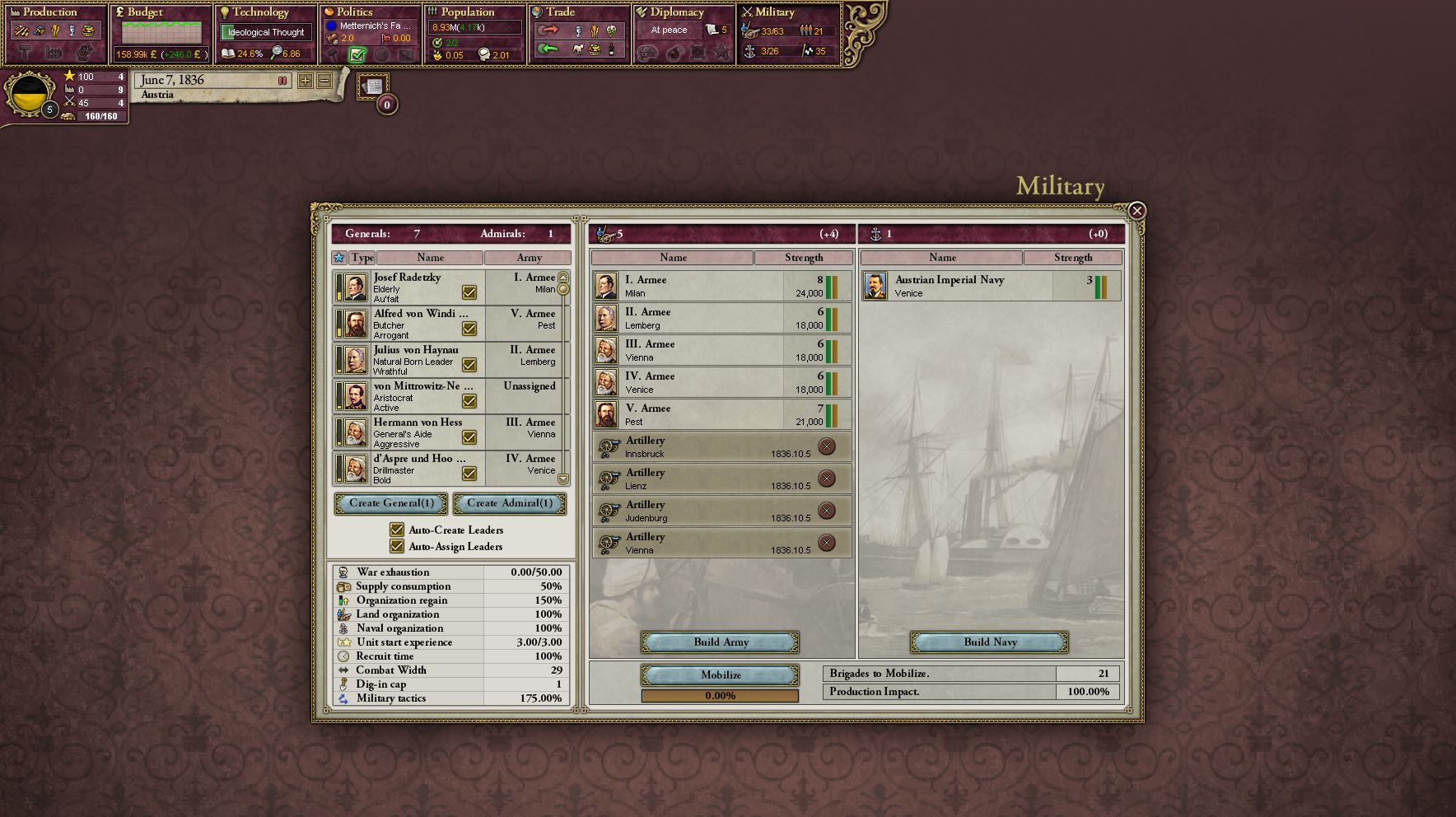 Deep into the year, an important discovery is made: gold has been found in Adelsberg, called Postojna by the natives, along with a similar revealing in Karlstadt (Karlovac). These two twin discoveries are immediately exploited by the Austrian state, and bring a steady supply of income to the crown, as well as employing many citizens in their respective areas. 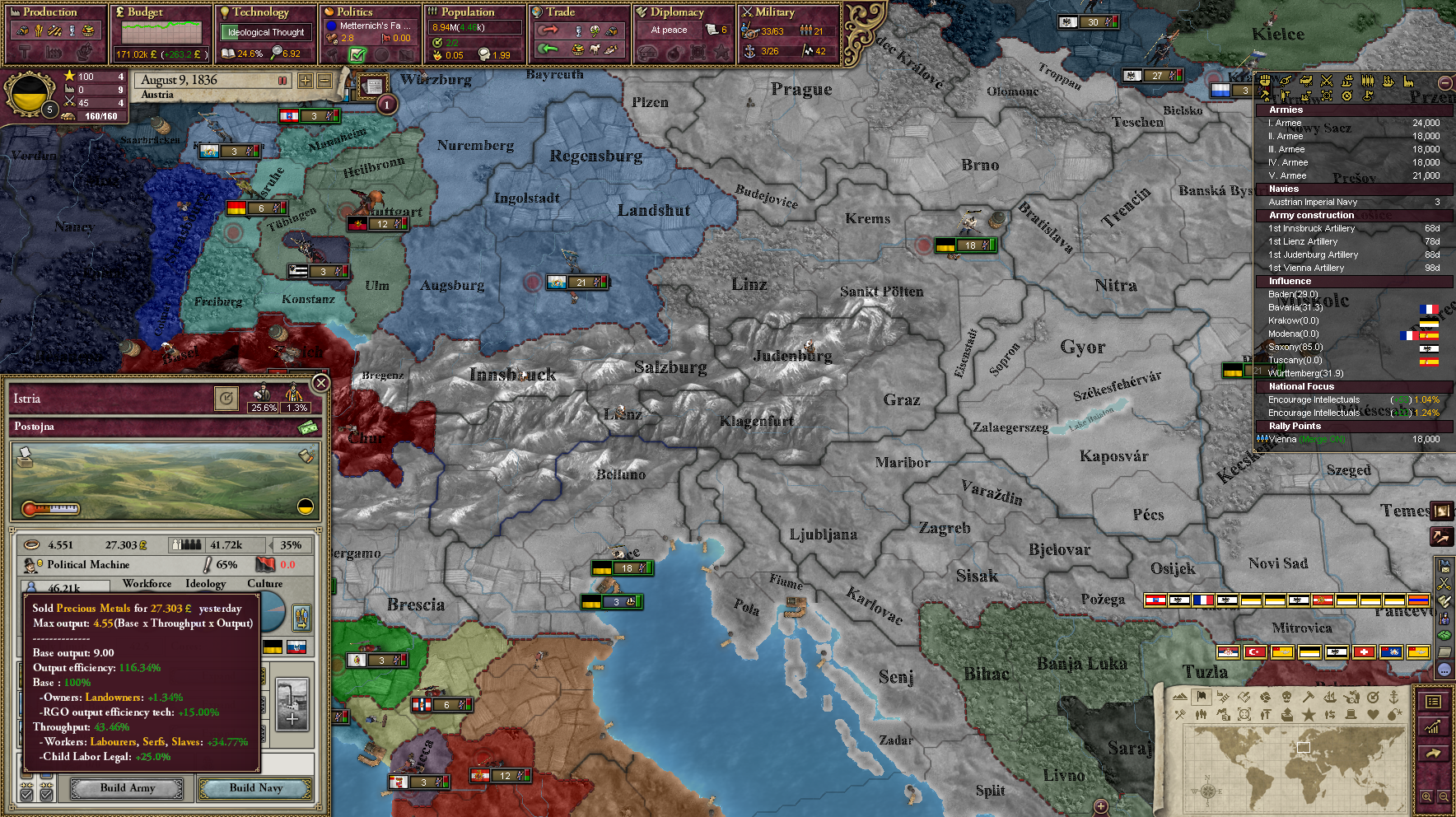 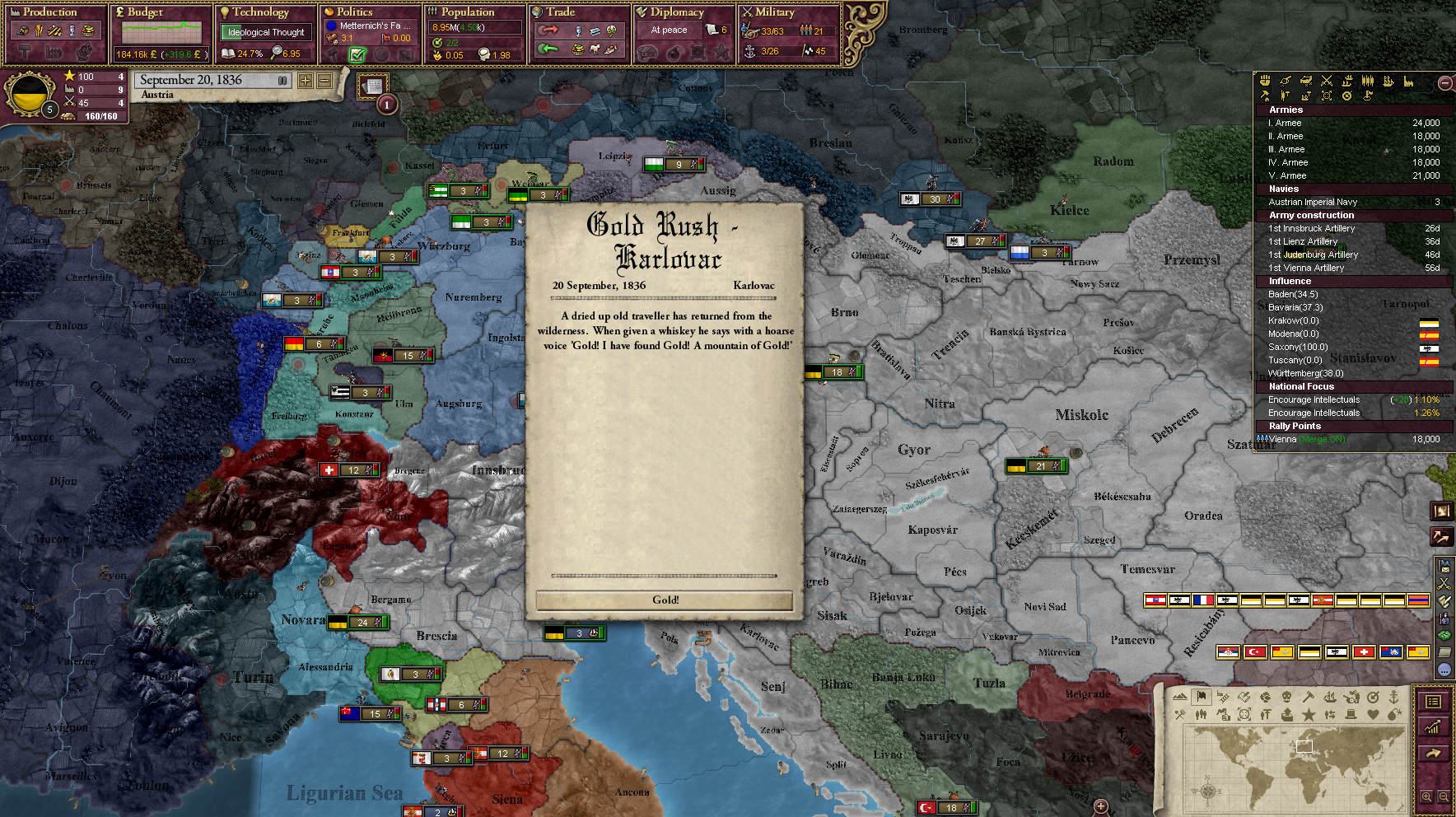 The month of November is mostly marked by the deployment of the artillery requested back in June. As they march to join the III. Armee in Vienna, Heß reports high morale and celebration among his troops, being given a powerful new tool to fight with; the green artillerymen themselves do not share Heß' s enthusiasm, but will be trained and drilled over time. 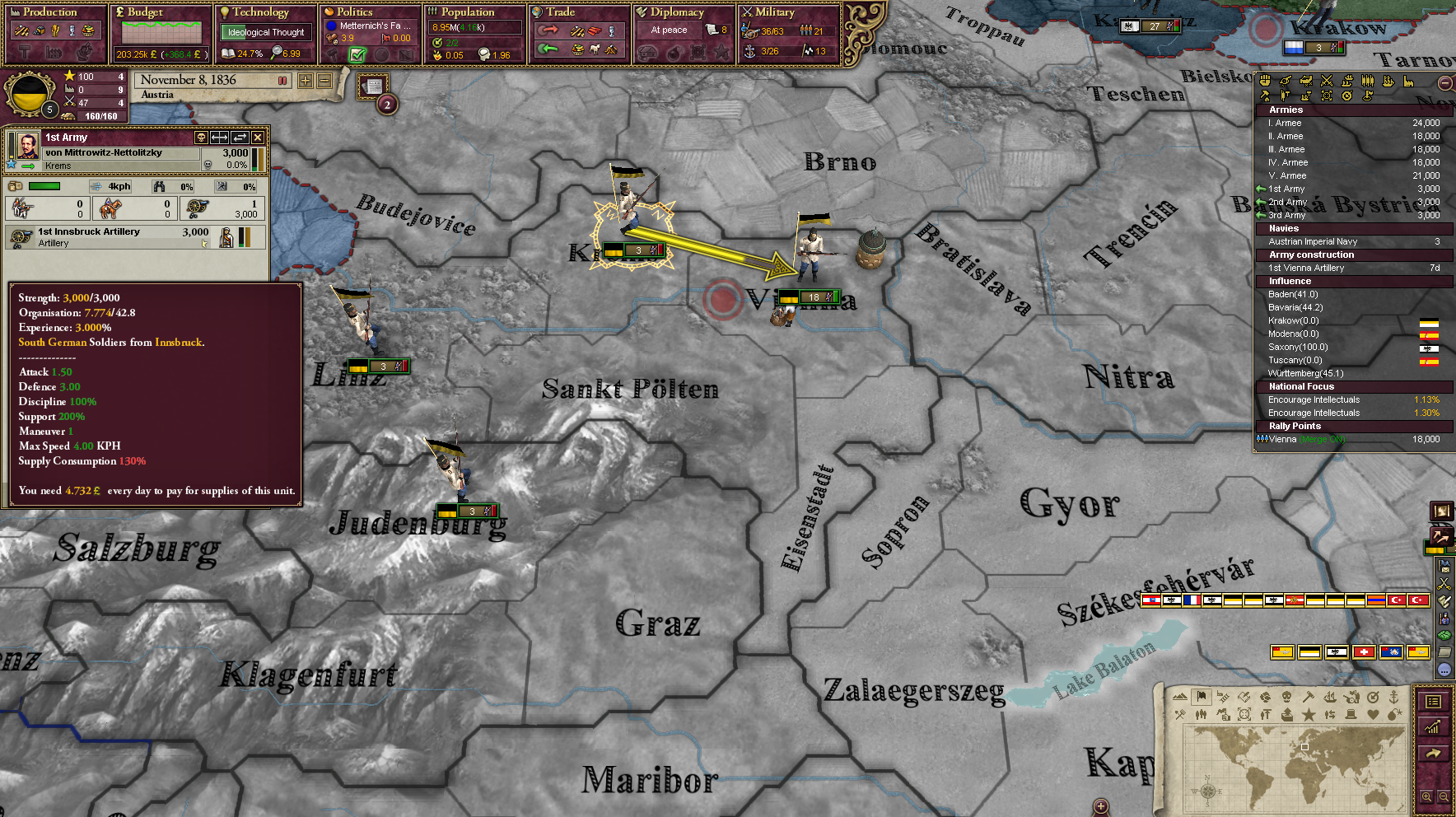 As the year comes to a close, the State Conference convenes again; many members seem to have renounced excessive militarism, but many have gone even a step further, and taken an anti-war stance in general with the Liberals. Let 1837 be the year of good things to come: for Austria needs it. 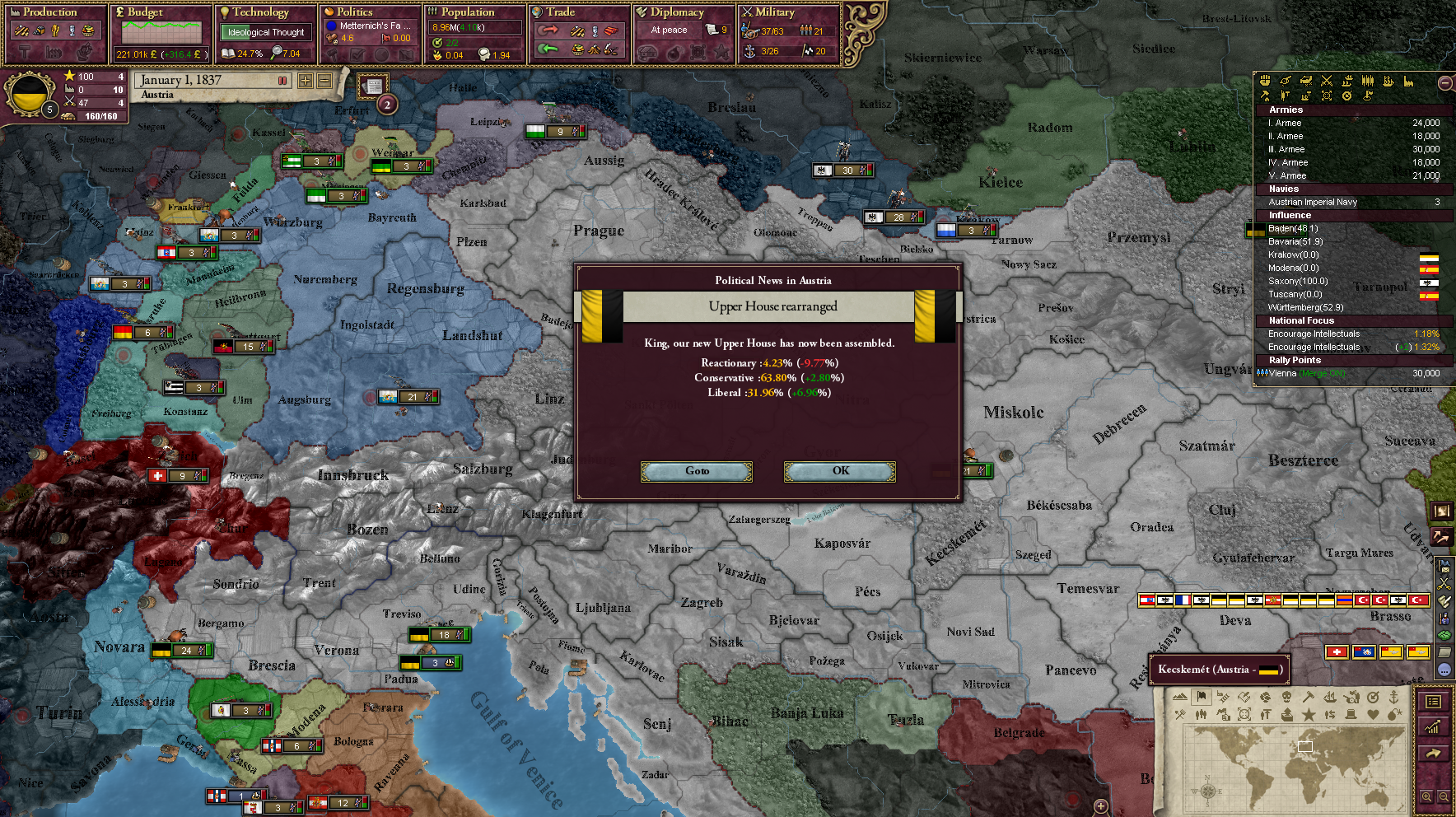 Toggle signature
"You are to be commended again, little knife."

Some family-related issues occured this past month, so I couldn't post as frequently as I would've hoped. I think that's fixed now, though, so I should be on track for posting every week like I intended to do at the beginning.

Most of you will probably notice this is going very slowly, but it's just the beginning. As we advance further into the AAR, I'll start leaving out unimportant things and events that don't have much impact on the game or on my writing, so it will hopefully speed up!
Toggle signature
"You are to be commended again, little knife."

Let us just not hope this will be result in the tune of Small Germany.
Toggle signature
Check out Long Live the Permament Revolution! A newly started Trotskyist Soviet AAR.