SolSara said:
If you haven't read the CD DDs for CK3 for example have a look! They are great sources of information.
Click to expand...

But it's not V3.
Expand signature
'Gentlemen, we're in the stickiest situation since Sticky the stick-insect got stuck on a sticky bun' - Capt. E. Blackadder.

The Empire needs YOU.. Come and post something nice about my AAR. The House of Habsburg. Victoria Revolutions VIPR01. Winner of the WritAAR of the Week Award 13 January 2008.
Reactions:

you know, though having this link in your signature "For our Patching and Expansion Policy, read here... " just say that it doesn't exist(dead link), is pretty funny, it might be a pretty bad publicity move
Reactions:

Just redownloaded the game from gamersgate... bot the most pratical platform lol

Is there anyway to transfer my GG keys to steam?

Simon B said:
Is there anyway to transfer my GG keys to steam?
Click to expand...

Unfortunately no. You'll have to re-buy it if you want it on Steam. Goes pretty cheap during major sales.
Expand signature
Furthermore I believe Victoria 3 must be made! 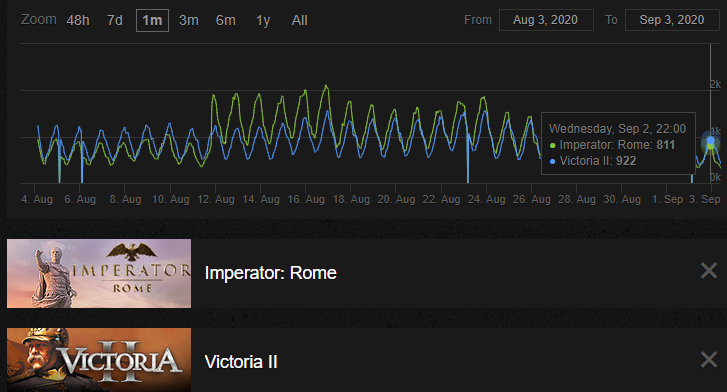 I brought V2 on day one as I was such a huge fan of the first Victoria game. Seems like only yesterday that, doesn't time fly by. I know the chances are slim to non of me getting an answer here but I'll ask anyway, is there ever going to be a V3?
J

Thank you very much for this post @Johan
I'm glad I saw it
I've been playing paradox since EU3 divine wind but I was a pirate back then until I received an email with eu3 and all expansions for free as a christmas gift I believe.
since then I bought all of the grand strategy titles and even though I really like ck2 and 3, really loved eu4.
victoria 2 has a place in my heart.

I just wish sometimes a litle bit more love to the rest of the world (specially Africa, but given eu4 and ck2 current thrends I don't believe this to be a problem) and as a history student, if you ever get to make a victoria 3, there are some aspects of history that just can't be out of a game that's essentially about imperialism given its ability to teach history through action and not just words. There is a reason why you conquer land, fight wars and do certain actions. I do believe this might be one of the reasons why this game was never done, because of the amount of crimes and genocides commited in the period and how you don't want to make a genocide simulator (which is why there is no holocaust/civillian casualties in hoi4). but I also feel like one way or another these things need to be in the game because otherwise, the pain and suffering of a whole century is just gone and lost to myths of the "good colonizer" where someplaces teach their young stuff like "they weren't as bad as the others".
I said about how this game can teach you history through action right? here is my best example and the one who stuck with me through till this day. One of the biggest problems in Africa, is the food supply, where the provinces IRL are producing export crops (cotton, tobbaco, spices etc) and not food. But, in the early, middle game that is not true, the whole continent is filled with food crops, like "cows", grain, "fish" etc and minerals but as you colonize the continent you start to get some events to change the RGO production and you see what your economies need and pick one, over and over again, unless it's a province that produces minerals. After a while I got an event of a famine and saw the RGO production of the whole continent... and it was just export crops and minerals in almost everysingle province!!! and to me it was really powerfull having these peaces fitting together like this.

I said I liked ck2/3 and loved eu4 but victoria 2 had a place in my heart because of things like this. because at it's heart this game is about people. I believe I came in contanct with this game in 2012/3 close to the naval expansion and it had a very big impact on my ever since. I know these times are tough and some of the things I mentioned above would really need to be masterfully done to be in a game, but sometimes as a history student I feel like they need to be there someway and these things can't just be forgotten, cast aside or tradegoods in a province, like it's in eu4. But it's a lot better than doing some poorly made mechanic and I respect that.

I don't know if this was the place for this or not, I really love the game and would rejoyce immenselly if a Victoria 3 was ever announced.
I'm just glad for your hard work.

Thank you Paradox for the awesome game
Thank you modders for the 10 years of support
Thank you for the community for keeping this game alive and for everytime i see a paradox post on facebook I see a x+y=vic3 confirmed I also really love it.

Sorry for bad english and good day to you all.
Reactions:

I agree with meskita's point about not trying to sanitize history. If you don't see and understand what was done, there's no regret, no remorse, and no motivation NOT to keep doing it. Paradox games have the potential to teach a lot about history, WHY things were done, and what happened as a result, and I'd like to see a conscious effort made to retain and even improve that in future games, not strip away the complexities and turn these games into blatant and simplistic map painters....with shiny graphics and 3D renderings.
Reactions:

Very interesting read, thank you. Very much looking forward to V3.
Expand signature
“I enjoy talking to you. Your mind appeals to me. It resembles my own mind except that you happen to be insane.”

Interesting to read about the inside view from Johan (and the team) from the time. Despite my forum join date, I've been playing Paradox games for over two decades now and was involved in the beta testing for Victoria 2 and several other Paradox games. I took some time off the forum and my old user account was part of some sort of Great Purge, hence this new account (which is fine for someone who is a casual forumgoer these days). Anyway, enough about me: I raised that to agree with the viewpoint that Victoria 2 was really the last of a generation of Paradox games - Paradox really ballooned thereafter. Victoria 2 was also a great release compared to HoI3, which underwent a very unpleasant release and reaction at the time. Hopefully this retrospective is indicative of a thought process heading towards a Victoria 3!
Show hidden low quality content
You must log in or register to reply here.
Share:
Facebook Twitter Reddit Pinterest Tumblr WhatsApp Email Link
Top Bottom