We just published a new update for the PC, Mac, and Linux version of Prison Architect containing more fixes to issues and bugs you reported, overall improvements based on both players’ and internal feedback… and some cool new features for Island Bound!

First of all, we are happy to announce that the new Island Generation tool is now available! This tool will allow you to draw a box on open water, and it will randomly generate a new Island in the selected area.

We hope you enjoy the new features and fixes to Island Bound and other legacy issues, and we’ll continue as always to monitor your feedback and suggestions. 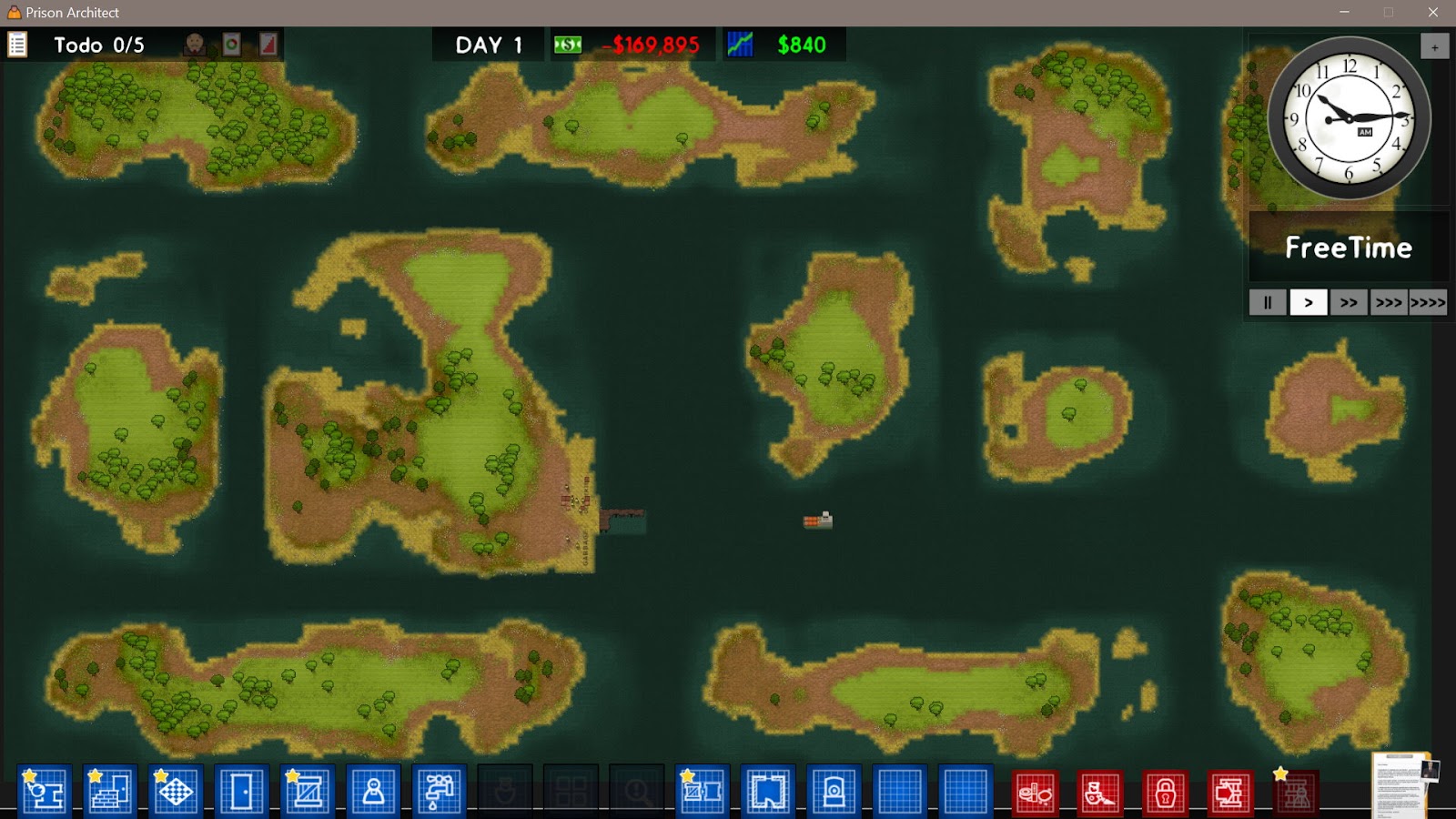 just started the game up after this update, and do not know of this is known, but i do not longer see objects, doors and paths in the planning when drawn. i run the vanilla game.

Clothing need is still broken, it rises too fast and prisoners refuse to change clothes, even when forced in lockdown for hours. Janitors still don't clean properly and have to be manually forced to clean. Bridges are still broken and cannot be built over gates, on the tiles directly next to objects, or on the tiles right next to the road.

But hey look cool new island shapes! What a load of bs the past few months of updates have been. If you can't make new features, at least don't break things that already work. Pathetic.​
Reactions:
J

There is still a warning when you have guard tower in the corner of the yard even after this update:

Rahlinc said:
just started the game up after this update, and do not know of this is known, but i do not longer see objects, doors and paths in the planning when drawn. i run the vanilla game.

I am getting this same issue after the update. Kind of frustrating not being able to plan with objects or pathways! It seems like something is deleting/hiding/rendering on top of the plans in the background, if I immediately go to delete a section of planning I can watch it quickly disappear.
Reactions:
H

I can second the planning bug with objects and paths, as well as the clothing & visitation booth problems.
Reactions:
E

cloning is still broken and costs twice as much as it should
Reactions:
W

Worph said:
I encountered a few issues with the new free update. i have NO DLCs installed.
1. Prisoners are not unloaded at the height of the reception instead they are ALWAYS unloaded at the height of the delivery area.
(See forum thread: forum DOT paradoxplaza DOT com/forum/threads/no-unloading-at-reception-all-prisoners-unloaded-at-delivery-no-dlc.1402494/ )
2. Possibly related to (1.), I cannot access the settings for deliveries in the logistics menu (to set my reception to receive from the road).
[...]
4. My "Deployment" and "Quick Build" menu items in the bottom menu bar keep displaying a star symbol in the upper left, eventough all ('new') entries in those respective lists have been observed. Other menu items did display those stars initially but they went away, after observing all items. (See attached image)
Click to expand...

These issues persist after the update. The problem with prisoners unloading at the Deliveries area instead of the reception area is very much frustrating to a NON-DLC player. I go into detail about this here, nothing has changed about it:
forum DOT paradoxplaza DOT com/forum/threads/no-unloading-at-reception-all-prisoners-unloaded-at-delivery-no-dlc.1402494/

(BTW.: I get that it is important to prevent spamming here and keep it to a mimimum. But it is very annoying and hard to comprehend that the forum will not let me post links at all, even to it's own namespace...)
W

I also have problems with janitors and laundry distribution. They only clean now and again, the prison is an absolute dump.

Prisoners go to the laundry, they do work and then nothing gets delivered to the cells. The clothing they do launder just seems to disappear. I have 350 cells and can only see about 10 uniforms?

Cannot play the game anymore as prisoners are going beserk with clothing needs.

The game is in an almost unplayable state due to bugs, including:

- Many delivery items not being stacked such as staff meals and bleach clogging up deliveries and resulting in having to mass dump them.
- Clothing need way too high/broken (Likely due to broken laundry and idle workers)
- Cloning appears to be double-ish cost (Charging for the placement, and then materials)
- Objects and Doors unplaceable in planning mode unless on foundation.
- Staff meals not being delivered to staff rooms/staff canteens. (Without having to reset it within food distribution)
- Food Distribution menu doesn't always allow you to change distrubution and will reset.
- Escape mode only gives one reputation point regardless of what you have done.
- Likely not a bug, but very annoying behavour: Staff walking from other side of prison to get to a security station (such as phone tab) when there is an idle staff member right next to it.
Last edited: Jul 16, 2020
Reactions:
H

Can second all of Sam9210 issues, the game is currently basically unplayable. Won't buy any DLC until this regression is fixed.
Reactions:
E

I reported two gamebreaking bugs on the steam platform which still haven't even been logged, let alone resolved.

Delivery trucks get stuck on the road. They can be dismissed but have to be manually dismissed or else their drivers just stand around by the trucks for days until you send them on their way. Then at one point I couldn't even dismiss the vehichle. Deliveries to my prison are blocked and the prison dies.

Prisoner delivery bus not unloading. It just sits there with all the prisoners on board blocking all deliveries and killing the prison.

No mods, No Island Bound DLC.

And you only just added the option to generate new islands now? After the patch? Did anyone in your QA team test this as far as buying new plots of land? I know the QA budget ammounts to a stick of gum and a prayer but that's utterly ludicrous.

Speaking of, visitation rooms are still broken. Prisoners still won't shower in the morning. They just mill around in the shower room, one or two occasionally using one of the many shower heads. Meanwhile the massive hygiene need causes a danger spike.

Clothing need still spiraling out of control too.

With your updates having killed my 'main, prison, I started a new one. After hours of planning- the prisoner bus bug killed that one too.

Can you please, PLEASE just swallow your pride and give us the option to revert to previous builds of the game? Once you have fixed the utter mess you've made of this game some of us will come back to newer versions. Right now though I literally can't play the game and in two updates you've achieved nothing. I at least want to play the game I payed for so please, just provide the option on Steam to roll back installs to something that was stable (last IV release preferably), or at least more stable than this mess (Cleared For Transfer was bareable).

I take umbrudge with being used as a beta tester for the QA you can't be bothered to provide.
Reactions:

all super are very happy with the fixes but also there are new bugs where the helipad is not allocated a zone ( staff , any), also in some not clear and magical way they throw contraband into the yard and into incomprehensible areas of the prison ( I have more than 1000 hours so do not ask questions about the placement allocation of zones, etc)

please give the opportunity to go back to the old versions of the game and pull out the hands of your guys who do not play but make the game
Reactions:
I

I bought the game on GOG and their client (GOG Galaxy 2.0 - Beta) have rollback option. You can choose between last 5 releases - no matter if you downloaded them previously or not. Thanks the heavens, otherwise I would have to dump this game after the latest patch.

Now I can rollback to before The Rock update - straight to "The Bucket 3197_1.01". Guess what that means?
Well, I can build the bridges the way I want - actually that's the reason I was looking for the downgrade option when I found out that in The Rock you can't place them directly next to each other (or actually next to any other object, even some stupid item in your delivery area).

And after reading the forums I can see that many other problems did not occur in the old version of the game if I understood everything properly. And I thought I'm such a newbie I guess you're like Microsoft, giving the end users product for testing
I think I'll stick to this version for some time. Bridges don't seem to be of major concern anymore when I look at other issues - luckily I needed these bridges on normal map, so I can continue my game. If I were playing on island I probably would be kind of in the dead end (The Bucket doesn't have islands).

Now, Paradox.
When you release next update, I will no longer be able to roll back to "The Bucket" (as I mentioned, GOG clients allow you to choose only last five versions, first of them being the latest version). So make sure you do things right. Though before updating I will give it few days and check forum for new issues your patch will bring. And I will look into way of creating game files backup so I can manually roll back. But these might not be 100% bulletproof. So just do your thing right and I will be able to sleep well

And all of the above is just silly. I think these bugs make game unplayable. For newcomers it means they will think about returning the game. At least I did so when I read about all these bugs. Thanks to this roll back option GOG gives it's users I'll give it a try. I wasn't really aware of most of them until I came here, but these bugs explain a lot. So basically, currently you're on wrong way to show your product to end users.
It is sad that you can make money by selling such buggy and I will even risk it - unfinished product. Because still not everyone will return the game and sometimes not everyone can - Steam have hard limits as far as I know, and this game requires some time in order to learn it and eventually think that it is actually bug and not your game style. Also Steam doesn't have this cool rollback option, so while I probably can play decent game (at least I hope so), many other users can't. It's just amazing.

Side note.
After I found out that mods are on steam I thought that getting the game on GOG was a bad idea (though I don't plan to install any of them now - I'd like to know the base game first). But this rollback option seems like life saver.
Anyway, just for future reference - does anyone know any other place to get mods for this game? I'm surprised that they're not on nexusmods page. That's where I usually get mods for any other game and for mods downloaded through nexus it usually doesn't matter if I bought game on GOG or Steam. Steam workshop, as far as I know, requires to have the game bought and installed via Steam.

EDIT
Now that 1.04 has been released, I can no longer roll back to "The Bucket" in case I push the update. So looks like I can't sleep well because you failed to address issues properly. But I still have faith in you. I hope 1.05 will do the job
Last edited: Jul 21, 2020
Reactions:
Show hidden low quality content
You must log in or register to reply here.
Share:
Facebook Twitter Reddit Pinterest Tumblr WhatsApp Email Link
Top Bottom