Jump to latest Follow Reply
Menu
Install the app
You are using an out of date browser. It may not display this or other websites correctly.
You should upgrade or use an alternative browser.
Hearts of Iron IV 40902 Bug Reports 11946 After Action Reports (AAR)
Show only dev responses

Patch 1.10.2 of the "Collie" update is now live and should be downloading through Steam and Microsoft Store as we speak. The new checksum is f82d.
This update brings a number of bug fixes and balance changes to the 1.10.1 release of last month (see changelog below for details).

Saves made with 1.10.1 are expected to be fully compatible with 1.10.2 and you can continue your previous game without risk.

Should you still have an older saved game (from 1.9 "Husky" or 1.8 "Fork"), it will not be compatible with 1.10.2, even if the game does not report it as such. This is sadly an issue we could not fix in this patch without painful side effects (see the known issues page).
As always, if you have an older save you can finish it by rolling back to an older patch.

If you discover any bugs in patch 1.10.2, please report them in the bug report forum as usual.

- Time required to complete the focus Spanish Coup has been reduced to 35 days to match its communist counterpart.
- Made the Finnish Him achievement more consistent. Players now need to hold Moscow as Finland and have at least 15% war participation when the Soviet Union capitulates, without being in a faction
- added fifth research slot at the end of Turkey's industrial branch
- Reduced Turkish focus completion times across the board by 175 days and reduced an additional 35 or 70 days for every path, shifted the Armed Forces decisions to be more accessible, added more player agency to Kurdish pacification decisions so they didn't feel like an endless sink, swapped cost for said decisions from political power to command power, added incentive for Turkish radicals to justify their own wars, reduced amount of Turkish geniuses in high command, rebalanced Clodius to greatly reduce the odds of getting upwards of six military factories
- Integrate Faction and Destroy Faction decisions no longer gives any ideology boost/debuff.
- National Military Academy now is a 35-days focus.
- The focuses The Peoples Republic of Bulgaria, Legislative Elections and Depose the Tsar now require 40% support for the appropriate ideology instead of 50%.
- PP penalty from National spirit Democratic Opposition Voicing Protests has been reduced from -50% to -25%. This NS will be added as a timed national spirit like other generic ideology drift national spirits.
- Reduced PP penalty in national spirit Democratic Opposition Voicing Protests from -25% to -20%
- Focus The Peoples Republic of Bulgaria no longer requires faction loyalty from the Agrarians. Focus Legislative Elections no longer requires faction loyalty from the Broad Socialists.
- The Spanish Struggle and Support the Spanish Coup no longer have manpower requirement.
- reduced all instances where bulgaria generates WT from 5 to 1
- decrease bulgarian WT reduction from macedonian organizations from 5 to 1
- slightly increased germain infantry equipment production factors
- Focus Crush the Communists is now a 35-days focus

- the AI will now be more likely to bring back the Kaiser in non-historical mode (WTT only)
- Adjusted Bulgarian AI strategy to focus on internal affairs, building civs and improving relations for an extra year.
- AI Improvements to make Bulgaria join the war earlier
- Improved AI weights in Ultimatum to Albania so that there are more factors now influencing the decision of Albania

- added bypass_if_unavailable = yes option for focuses
- added state highlighting for on_map_area for decision categories
- added error log when a trigger/effect that was supposed to go in {} is not
- limit inside on_research_complete is now deprecated, use on_research_complete_limit outside of on_research_complete instead
- Add new effect to remove war goals of a specified type targetting a nation
- Add Is leading volunteer group trigger
- Added variable party_popularity_100 which is a variant of party_popularity where the value is multiplied by 100 as to allow script to have as much precision as code when manipulating party popularity
- Add is_leading_volunteer_group_with_original_country trigger
- Added optional parameter keep_political_leader to start_civil_war effect which controls if the party leader of the revolting ideology will join the revolter as its leader.

Eh..... Nothing about Formable Nations fixes, Hoofin' It fixes, and especially: Arabia?

@Áurum is right, need to tell them again directly.

Kosaki MacTavish said:
Thanks for the Turkish focus fixes, but still, i would love to give my suggestions, mainly regarding Waking the Tiger's Formable Nations that need fixes, and missing/wrong state fixes for BftB's Formable Nations.

My thread of Suggestions for Formable Nations Rework (closed):
https://forum.paradoxplaza.com/forum/threads/suggestions-for-formable-nations-rework.1313769/

New Suggestions for (the Dominions and) Formable Nations thread:
https://forum.paradoxplaza.com/foru...r-the-dominions-and-formable-nations.1433083/ 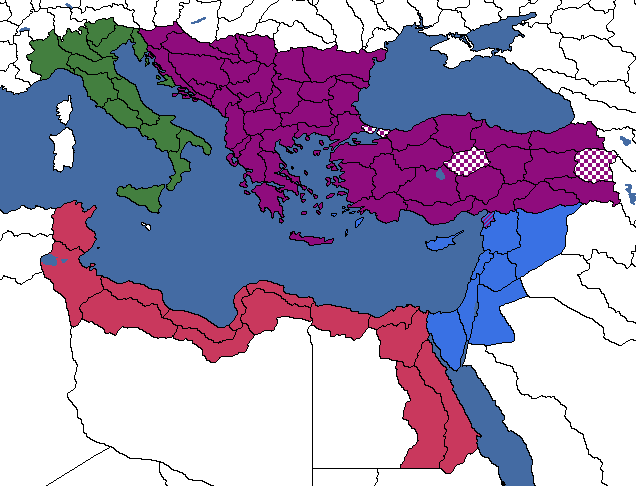 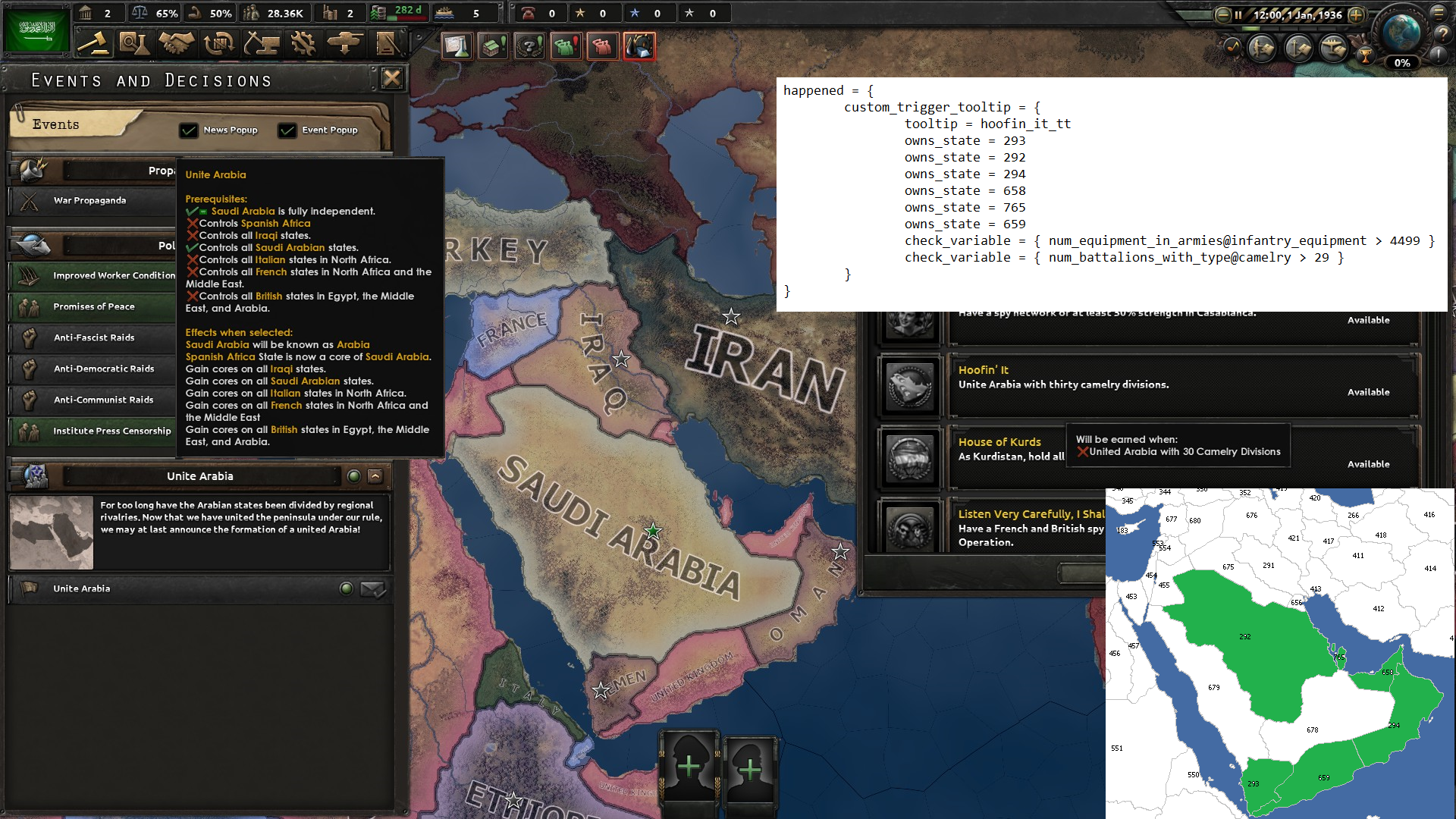 Firstly, on 1.10.* we still need to kick out both Italy, Spain, AND Allies to even form Arabia. Please fix that to just requires Saudi Arabia, Oman, and Yemen, and move the other state requirements into additional decisions, just like Ottoman's Vilayets and Byzantine Triumphs. Or, if Arabia is intended to be a heavily anti-Allied one, the Trucial States, Qatar, and South Yemen are also required. Your move.


Battle for the Bosporus 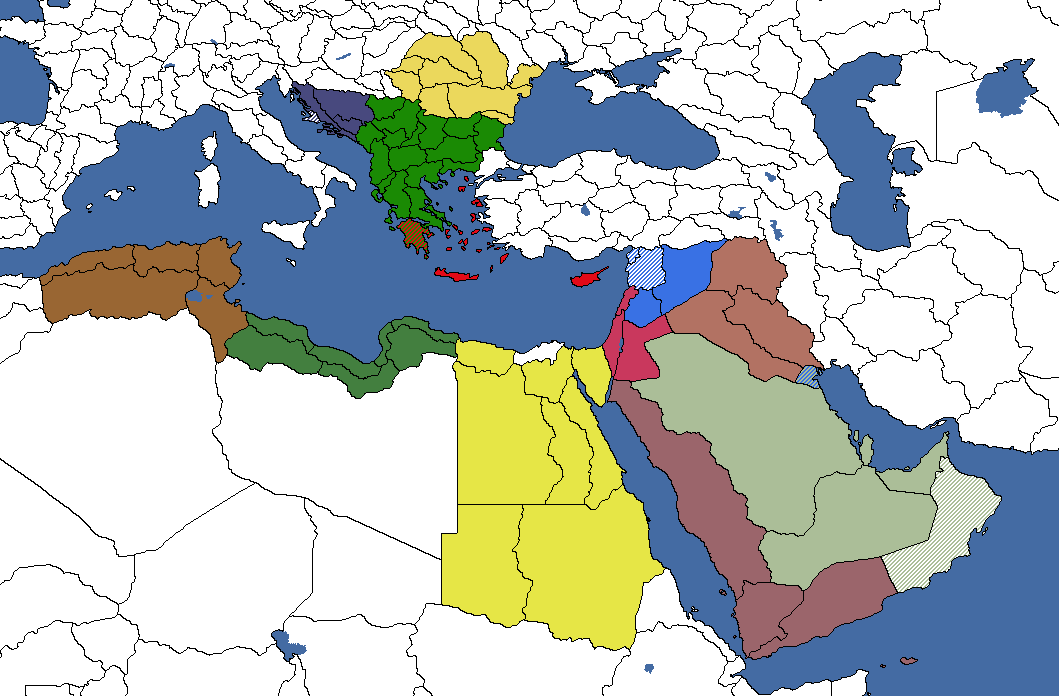 Missing/Wrong states:
- "Integrate the Khedivate of Egypt" did not require and core Alexandria (447), please fix it
- Kuwait (656) is needed for the "Restore the Vilayet of Halep" decision to integrate Syria, please fix it

That's all the formable nation bugs i have seen for both Waking the Tiger and Battle for the Bosporus. Maybe there are some bugs in Man the Guns and La Resistance that i did not know yet. Hope this can help the 1.10.2 beta, the sooner the better.

The only developer of Suggestions for Formable Nations Rework (SFNR): The Mod, a modification content in an attempt to rework the formable nations that has ALREADY existed in Waking the Tiger based on the very same named thread in the forum

As per the changelog, formable nations still not fixed, another disappointment.

I don't even know what bug reports are for, if they are ignored 99% of the time unless they are game-breaking.


Áurum said:
Will you fix wrong state requirements and cores for Hellas, Byzantium, Ottoman Empire and Turan? Hellas gets a core on Valladolid in Spain but doesn't core Istambul, for example.
Many old formable nations lack newly added states, like the Roman Empire or Austria-Hungary not coring Herzegovina.

Also, what about this? I reported it but got no answer.

Toggle signature
If interested, please vote for better surfacing of information in HoI4 in this suggestion thread

MatRopert said:
- the AI will now be more likely to bring back the Kaiser in non-historical mode (WTT only)
Click to expand... 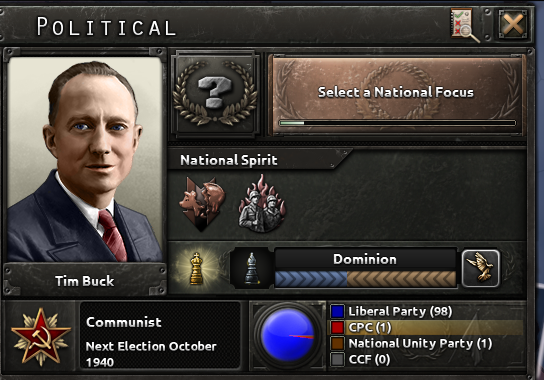 Tim Buck's portrait for those who can't get ingame
Reactions:

I know this isn't for "problems" but please for the love of all that is holy! 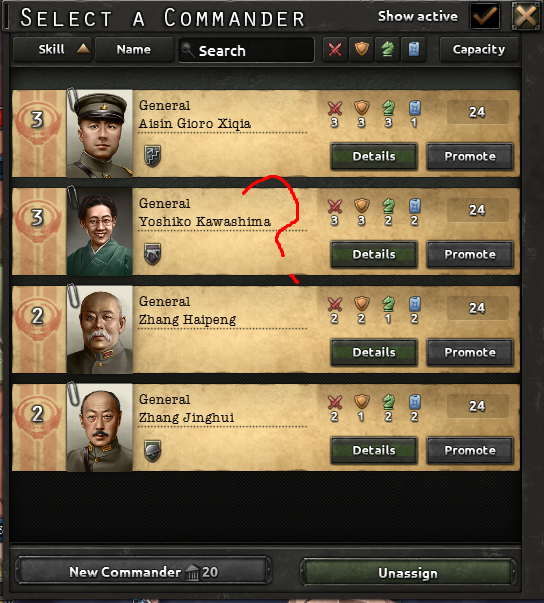 Have you already fixed "Istanbul is Constantinople. Again" achievement? I have made It and the achievement did not trigger.
Reactions:

MatRopert said:
- Yugoslavia can no longer gain cores on the entirety of Europe
Click to expand...

Wait, what? How was this achievable?
Toggle signature
eggers
Reactions:

Any news on splitting Northern Dobruja from Muntenia as a separate region?
Reactions:

Dugonger said:
Wait, what? How was this achievable?
Click to expand...

There was a featu-- I mean, a coding oversight where uniting the kingdoms in the Devolution path of Yugoslavia would instantly annex all of Yugoslavia's puppets and give cores on all of their territory, owned or not owned, to Yugoslavia, if their capital was in Europe. Essentially, if you manage to puppet, let's say, Soviet Union while on the Devolution path, reuniting the kingdoms would annex and core them.
Reactions:

MatRopert said:
the AI will now be more likely to bring back the Kaiser in non-historical mode (WTT only)
Click to expand...

You madmen did it. You actually did it.

StivKobra said:
There was a featu-- I mean, a coding oversight where uniting the kingdoms in the Devolution path of Yugoslavia would instantly annex all of Yugoslavia's puppets and give cores on all of their territory, owned or not owned, to Yugoslavia, if their capital was in Europe. Essentially, if you manage to puppet, let's say, Soviet Union while on the Devolution path, reuniting the kingdoms would annex and core them.
Click to expand...

It was hilarious, too. With fairly normal gameplay, you could get cores on Ukraine (from Romania) and Czechoslovakia (from Hungary).

Or you could go bonkers and core every state in Europe, the entire Soviet Union, and (via the Imperial Federation) the entire USA, much of southern Africa, and all of Polynesia. Maybe parts of Western Asia and the Middle East, too, if you could persuade Turkey to keep its capitol in Istanbul after puppeting.
Toggle signature
We have no enemies, only future allies we need to conquer and puppet.

Thanks for the Tim Buck portrait. Now I can retire the crappy one I made myself. I'm curious, I also made his eyes blue but it was just a guess. Is there any source for that kind of stuff? Or best guess?
Reactions:

This is great! Would also love to see the US more likely to go communist and fascist as well. I've played countless ahistorical games and have never seen them go down these alternate paths. Thank you!
Last edited: Nov 12, 2020
Reactions:

There is some kind of improvement with respect to the launcher or there will be it in the near future since I think it needs to be reviewed since problems arise in this when identifying the mods
Show hidden low quality content
You must log in or register to reply here.
Share:
Facebook Twitter Reddit Tumblr WhatsApp Share Link
Top Bottom