Menu
Install the app
You are using an out of date browser. It may not display this or other websites correctly.
You should upgrade or use an alternative browser.
Victoria 2 17327 After Action Reports (AAR)

So I'm trying to do some digging on how naval combat works. I know I can't be the first one to do this but for the life of me I can't find any detailed info about it on the net. All I can find is endless forums threads/reddit posts where people are asking how naval combat works or what's the optimum fleet composition and then getting a dozen or so different answers or vague ideas of how they think things work.

I've done some very limited testing and although I haven't figured out everything by any means, I thought I'd write down what I know(or think I know). If somebody has done more extensive tests or knows something I don't, I would love to hear it.

When two enemy fleets move into the same sea province, combat begins. A die is rolled for each side. This roll will be used for 5 days, after which it is re-rolled. 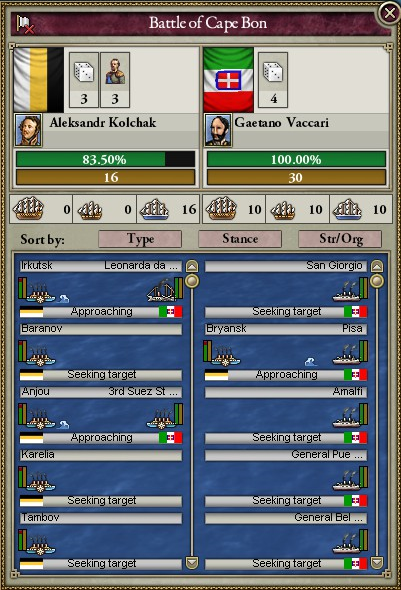 Seeking Target
The ships will first have to select a target. The following line in defines.lua affects this:
So there is a 50% chance to find a target(per day, I assume) with 10% being the minimum. The first check happens right as the combat begins so some ships will already have a target selected when the battle starts(as you can see in the screenshot above).

The ship that is targeted is picked randomly except with the following modifiers:
So it gives higher preference to damaged ships and ships that are shooting at you. Also according to the HoD manual and the the dev diary for HoD naval combat, there is also a tendency for ships to target ships of their own size(light ships against light ships etc) although there's nothing like this in the defines, so I guess this one is hardcoded and not something we can mod.

Once target is selected there is also a small chance of randomly changing targets in the middle of the battle:
I guess this represents the general chaos of battle or something.

There is also a limit on how many ships can target the same enemy ship:
I did notice in one battle that a ship was targeted by 7 enemy ships which should not be possible. Although they didn't all get to fire at the enemy so it is possible that the check for too many ships targeting the same enemy is not made at target selection but only once somebody gets into firing range. In the test battle the seventh ship dropped out on the day that the first five ships started firing at the enemy.

There is also a coordination penalty in the game that affects target selection. Basically, the more you outnumber the enemy fleet, the harder it is for your ships to find a target:
The ingame overlay says it's "Affected by amount of our ships and potential targets." so it should not include enemy ships that have disengaged(more on that later). Now, the ingame penalty is in percentages and I don't exactly know how that relates to the two numbers above. My guess is if you got 100% penalty ingame, you get the full 3% and 20% penalties to changing/selecting target.

Approaching
Once a target has been selected, your ship will have to get in close enough to shoot. At the start of combat, the two fleets are 200 distance away from each other. So the ship starts to move towards its target until it is within its firing range. There is one line in the defines that determines move speed:
So the ships speed attribute is somehow changed into "combat speed". I don't know how exactly this is done. Testing this is somewhat annoying as the speed is also randomized and is affected by the target ships behaviour. So if the target ship has also found a target(and is thus moving towards it) then you're actually covering the 200 distance faster, or vice versa if the target ship is retreating.
Now I did notice one strange case in my testing. So the ship needs to move within its firing range before it can start firing. So as an example in one battle my frigate(firing range: 50) moved as follows:

Once the ship is in range of its target, it starts firing. You will see two numbers under your ship. The green one is how much org damage you have done while the red one is how much str damage you have done. these will obviously start at 0.00/0.00 on the first day of "firing". Hovering over the numbers gives a tooltip that tells you your estimated fire power and what affects it, as well as your hitting chance. 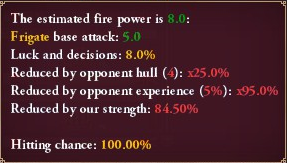 Estimated firepower is formed as follows:

So if we calculate that we get:

The hitting chance is always 100% unless your target has evasion.

The "Luck & Decisions" bonus depends on the die roll plus your leaders attack/defend attribute. Here's how it looks:

Or at least this is how I thought it works. The problem is that there's been a number of different cases where the next days damage numbers don't add up. The differences seem to me big enough to rule out rounding errors. These discrepancies have mainly been with org dam. As far as I can remember str dam has worked flawlessly. So I think I'm missing something.

Lastly, there is one more modifier for combat:
So once the organisation of the ship goes to 0, it starts taking double str damage. Note that similar to the luck bonus, this one is written as 2% in the tooltip, whereas it should be x2.

Retreating
Once you are firing at your target(and assuming you don't randomly change/drop targets), you will keep firing until you either destroy the target ship, or they disengage. A ship can start retreating after its org or str drops below 15% of max:
Once org/str is below that line, you have a 7% chance to retreat every day. Since ships deal twice as much org damage than str damage, organisation will drop to below 15% first, giving the ships then a chance to retreat before they are destroyed. As can be seen above, there is a movement penalty when retreating, giving the other ships more time to shoot. Once the ship has retreated far enough, it is considered "disengaged" and takes no more part in the battle. Exactly how far does the ship have to retreat, I'm not exactly sure. I would guess that they have to get back to the "starting line", ie the point where they were at the start of the combat(100 distance away from the "center line").
There is also the following line in defines:
I'm not exactly sure what this means. Like it seems to indicate that the ship would have to be close to the "center line" in order to able to retreat. Now normally most ships will be at the center line, since they start the battle at 200 distance and then move towards each other, meeting approximately in the middle. But does this mean that ships that are far away from the center line can't retreat when low on org/str? That doesn't really seem logical.

Once the target ship is either destroyed or has retreated beyond the firing range of your ship, your ship will have to go back to square one, finding a target.
These two modifiers seem to move the ship back from the center line. I assume this is in order to make sure there is at least some movement that has to be covered before they can start firing again(since most ships will at this point be near the center line as opposed to the 200 distance away like at the start of combat).

If all the ships in the fleet are disengaged, the whole fleet retreats and the battle is over.
Last edited: Jan 10, 2019
Reactions:

Poppis said:
I'm not exactly sure what this means. Like it seems to indicate that the ship would have to be close to the "center line" in order to able to retreat. Now normally most ships will be at the center line, since they start the battle at 200 distance and then move towards each other, meeting approximately in the middle. But does this mean that ships that are far away from the center line can't retreat when low on org/str? That doesn't really seem logical.
Click to expand...

Sounds like this refers to the entire fleet, not individual ships. In land warfare, the player cna't order an army to retreat until enough time has elapsed. In naval warfare, the player can't order a retreat (by right-clicking a new province or sea zone) until the ships are near enough. Hovering over the white flag icon in the corner of a fresh engagement will display text that matches what you have here.
Reactions:
Show hidden low quality content
You must log in or register to reply here.
Share:
Facebook Twitter Reddit Pinterest Tumblr WhatsApp Email Share Link
Top Bottom