Understanding forts and zones of control

Menu
Install the app
You are using an out of date browser. It may not display this or other websites correctly.
You should upgrade or use an alternative browser.
Europa Universalis IV 75376 EUIV: Suggestions 15988 EUIV: Technical Support 5671 EUIV: FAQ & Strategy Guides 181 EUIV: AAR's, Let's Plays, and Fan Fiction EU IV: Alternate History Short Story Contest Contr 26
B

I and many others have a hard time to make sense out of zones of control (zoc). There is no in-game guide, the wiki is severely lacking and I was unable to find a single, (mostly) complete guide on how it all actually works.

I will start out with what I know and what still confuses me. I hope others will do the same and we will finally get a handle on this. I will update the first post to include everything new I learn and hope it will transform in a comprehensive guide over time. Please help us out.

Do not use this thread to complain about forts, fort-prizing, zone of controls or anything else. This should be about understanding how it works, nothing else.

What to do: If the enemy is heavily fortified try to wait for their troops to enter your lands, instead of invading / sieging immediately. Build / keep mountain forts. Try to enter sieges without crossing whenever possible. Try to remember it, if enemy forces came via ships or strait crosses to besiege forts. Have reinforces ready if you need to siege mountain forts.

The basics of zones of control

Wiki said:
A zone of control restricts the movement of enemy armies through the province with the fort, and provinces immediately adjacent to it.
Click to expand...

It will only work with adjacent provinces that are allied with the fort controller or neutral. Movement in provinces controlled by the enemy will not be limited.

Wiki said:
After an enemy army enters a province within the zone of control, they can only move from there to two other provinces: the province containing the fort, and the province they came from.
Click to expand...

As I understand it currently, it is also possible to leave to any neighbouring province that is controlled by allied forces.

Wiki said:
This means that forts form a barrier against enemy armies; if placed so that there's no way around the fort(s) the enemy is forced to siege one or more forts in order to get at the rest of one's country. This can provide time to muster up one's forces, or simply time for the enemy to get hurt by attrition while sieging. The Zone of control also applies for occupied forts. An army who belongs/allied to the province owner can not pass as long as the fort is not liberated.
Click to expand...

Moving into forts through overlapping zones of control
Assume that fort F and fort G both project a zone of control on a province. To reach fort F you have to go through the province. While both forts are in enemy hands this is perfectly fine and you can do so. If you march an army onto fort F and capture it successfully but ignore fort G, you can no longer move from the province to fort F, because the zone of control by fort G will block the movement. Your troops could be stuck behind enemy lines, after they completed the siege.

What to do: Capture fort G first, if you can reach it without going through overlapping zones or capture the province and make sure to keep it. This means having troops either in the province or besieging all forts projecting a zone of control on it.

Yes, there is a fort hiding beneath the tooltip, projecting a zoc and stopping our troops. 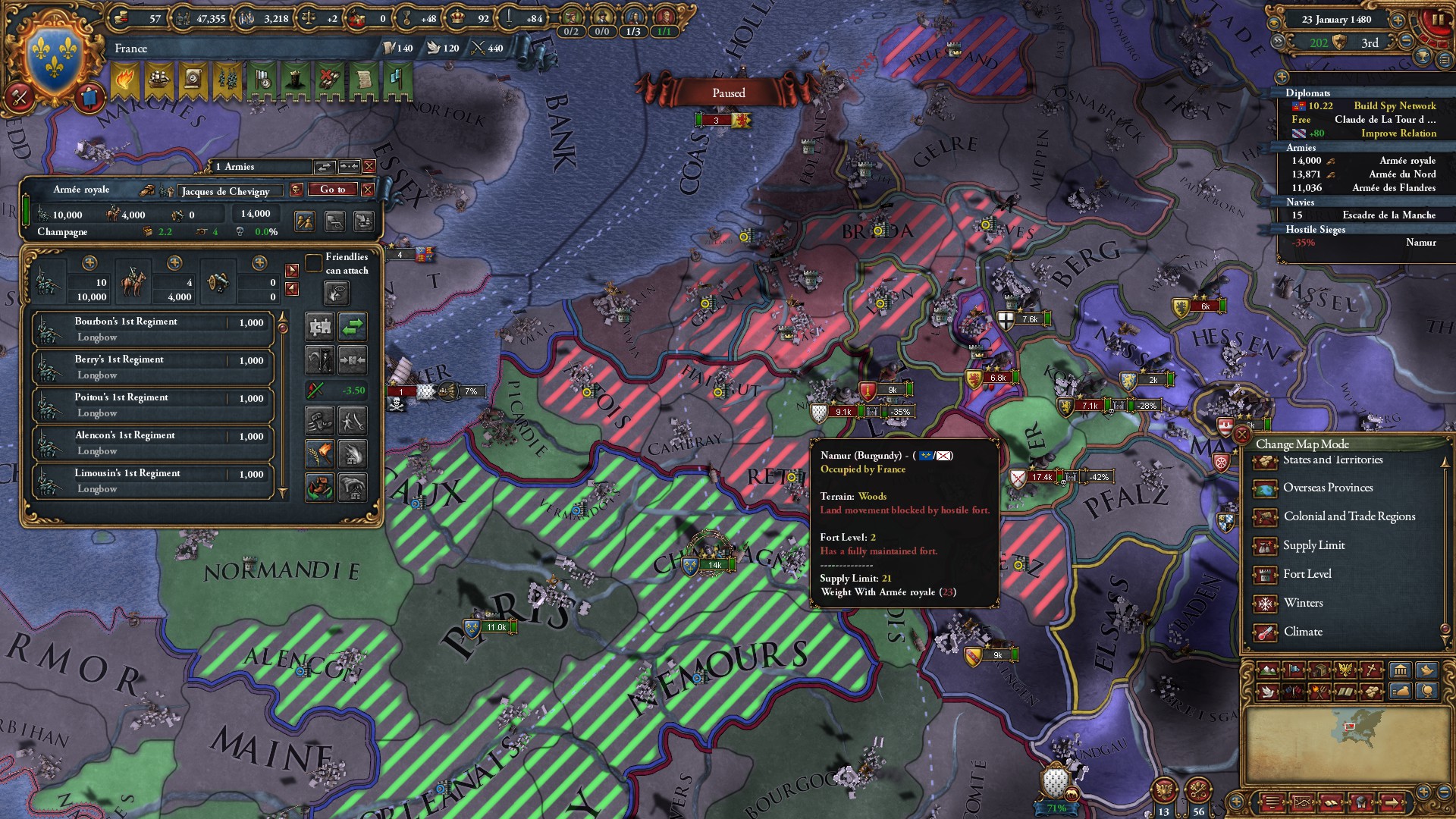 
Luxembourg will not block our way! 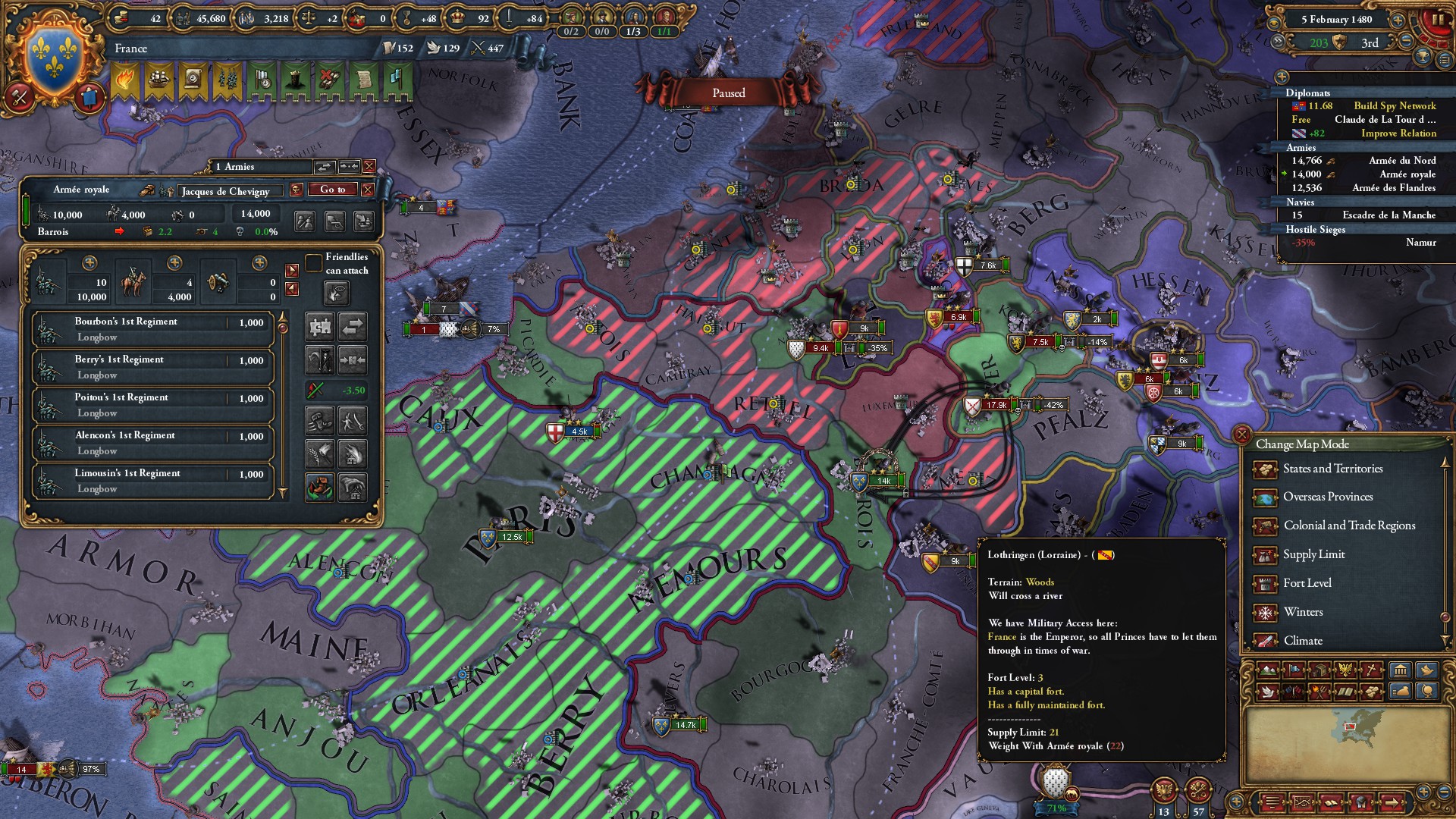 AI "shortcuts"
If an ai controlled army can reach (and wants to go to) any province, it will take the shortest possible path. It takes zones of control into account while determining if it can reach a province, but not while following the shortest path. So it will not reach places made unreachable via forts, but it will not walk around forts if it could. They will walk right through.

This is a bug and known to Paradox. Hopefully they will fix it soon.

Chaingun said:
To be fair #1 is a bug somewhere in gameplay code and it would be a pretty stupid/pointless cheat (and we would have added defines for it like with #2 if it was intended). [...] I know these issues are getting further looked on so all hope is not lost, necessarily.
Click to expand...

Not yet understood weirdness (please help out)

Ignoring border forts (not the ai "cheat", not "hop over" described earlier)
It is sometimes(?) possible to ignore zones of control, if the entered zone of control province / fort and the otherwise illegal exit province are both neighbouring allied provinces. Can someone confirm this? Does it always work? 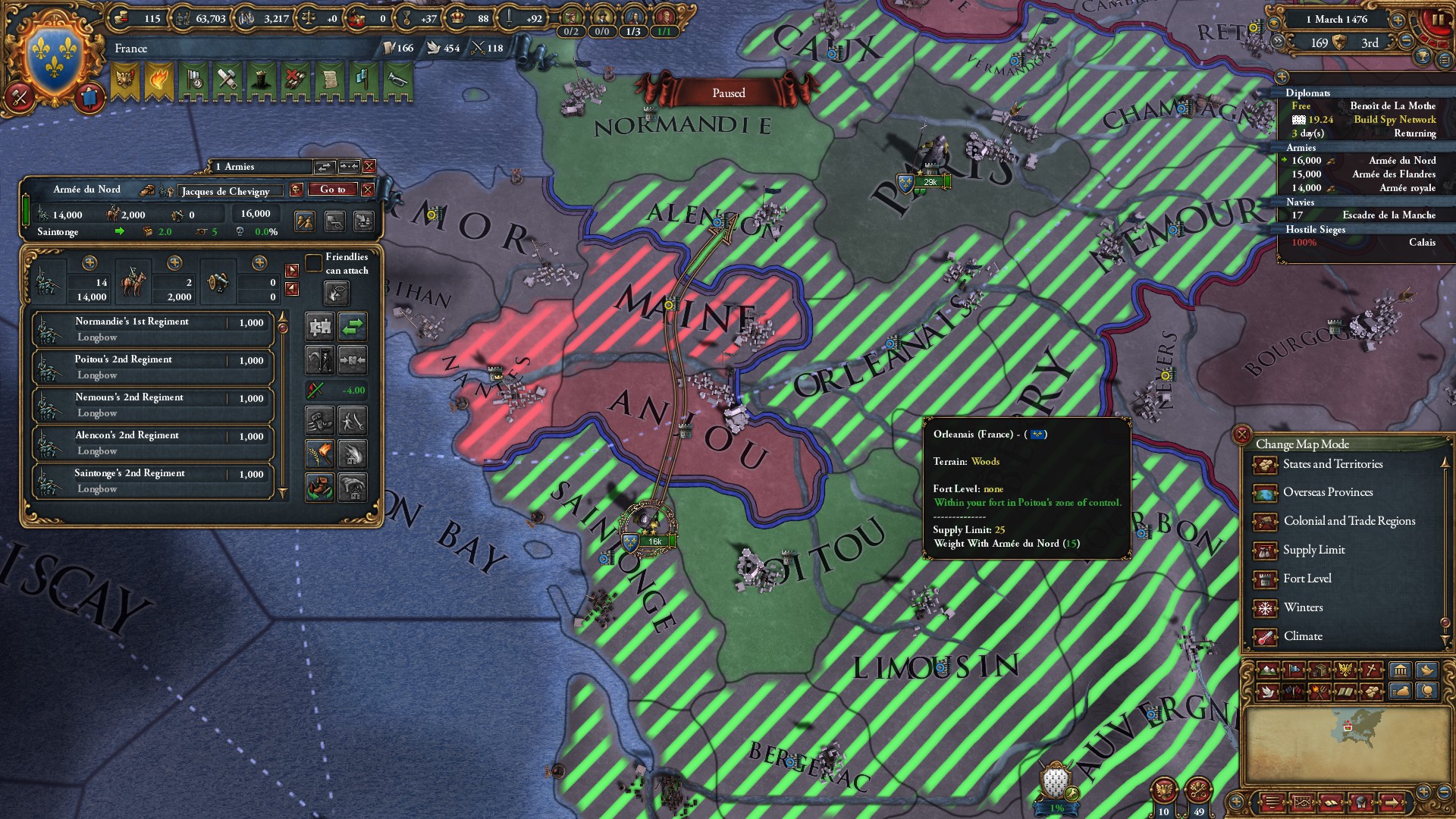 Yes, I used this picture further up to explain something I believe I understand. Here is something I don't. Moving troops directly from Barrois into Metz is not possible. Moving troops from Trier into Metz and from there to Barrois is. I do not get why; for all I can see the situation is perfectly symmetrical and it should work both ways.
Anything else someone is still unable to understand? Found something that proves rules stated here wrong? Post it!
Last edited: Oct 19, 2016
Show hidden low quality content
You must log in or register to reply here.
Share:
Facebook Twitter Reddit Tumblr WhatsApp Share Link
Top Bottom