Under the Rising Sun, a Japan Interactive AAR 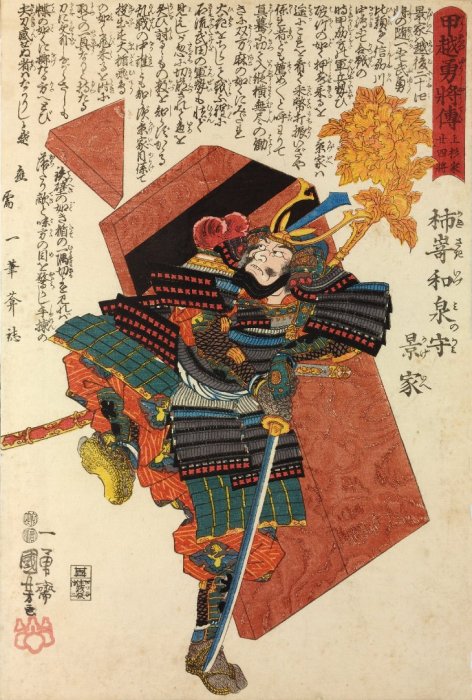 Sakamoto has a son named Ryoma, born sometime around January 3, 1836. He belongs to the lower-ranking samurai class. Although he and his family are loyal servants of the Shogun and local daimyo, they show even more loyalty to the emperor (orders from Kyoto may override those of the Shogun and daimyo depending on the situation). Currently the Sakamoto clan supports the old order, but they are not against throwing away tradition in order to save Japan from threats to its existence.
Last edited: Jun 13, 2015
Toggle signature
Nominated for Role PlayAAR of the Month for Nov. 2016; Fan of the Week for 4-9-2017, 6-17-2018, 4-19-2019; Character Writer of the week of 9-27-2018; WritAAR of the week of 9-25-2016 and 12-16-2019
Participated in the following iAARs as: The Doukai; Sakamoto Clan; House de Leon (y Asturias y Salamanca); House de Leon (y Asturias y Salamanca); House von Hohenzollern; House de Alvear y Ponce de Leon
Return of the Celestial Empire - A Victoria 2 Kaiserreich AAR
The Hohenzollern Empire - A Roman Reich Megacampaign (nominated for/won Megacampaign of 2017, 2018, 2019): Kaisers of the Romans, Uber Alles (won ACAs Q1/2 '16), The Imperial Century/Iron and Blood [1914+] (won ACAs Q1/2 '16), Götterdämmerung, Fallen Phoenix (to 1987)/Rising Phoenix (from 1987) (in Victoria 2 New World Order) Bio:
Hideki is the head of the prestigious Matsui clan, which was granted the Domain of Kobe for its contributions during the siege of Osaka in 1615. He was well versed in the arts of diplomacy and warfare by his father, Ichiro. As a young man, Hideki spent most of his time chasing after geishas and getting into fights. However, since the death of his father three years ago Hideki has taken responsibility for the clan and managed the province competently.

Hideki is deeply traditional and supports the Shogunate. He is skeptical of change, technology, and Europeans. So far, Hideki has resisted the calls of the city's merchant base to open up trade with the rest of the world, particularly Europe.
Last edited: Jun 12, 2015
Toggle signature
Jean Francois Domadeaux
Revolution and Reaction- A (very) French Victoria II Interactive AAR

((Claimed In-Game Provinces at this Point:

The Definition of Strife

Name: Ito Katashi
Born: 16 March 1810
Class: Daimyo
Province of Control: Miyazaki (Kyushu)
Background: Katashi has lived his entire life within the Miyazaki province. His father, the embodiment of the isolationist trend that has dominated Japan for centuries, kept him at home at all times. His only encounter with outsiders was with travelling samurai and Dutch traders that visited the area. With the death of his father the previous year, Katashi finally has a chance to escape his shadow and adopt policies he favours as Daimyo of Miyazaki. Despite all he has been taught and grown up with, Katashi has adopted a more open approach and is willing to accept new ideas that favour Japan's growth even if they go against tradition. He favours westernization and does not view the Europeans as a threat, but rather as a useful source of knowledge and wealth. However, his father did instill a strong sense of loyalty to the Emperor and that has stuck. Despite all this, Katashi is still new to politics and tentative about voicing his opinions to the other Daimyos or the Shogun.

((I hope everything is in order. I'm not too familiar with Japanese politics and history. ))
Toggle signature
Check out my Inkwell for a list of my AARs

Saw what you did there

History: Hirakuni was a descendant of the revered author of the Hagakure, Yamamoto Tsunetomo (d. 1719). The family received due honour for their ancestor's wisdom, which they duly cultivated both within Kyushu and beyond. Hirakuni's father was serving the local daimyo in Nagasaki province when Hirakuni was born in the fateful year of 1808. The HMS Phaeton entered the harbour on 8 October, seeking the Gaijin Dutch traders. They forced the Saga clan daimyo at cannon point to resupply their vessel before they left, bringing much shame to the daimyo's family. The daimyo committed seppuku to restore the Saga family's honour but the Shogun was not impressed. He found a ready replacement in the honoured name of Yamamoto and elevated Hirakuni's father to the rank of Daimyo of Nagasaki. Hirakuni inherited the title in 1832 upon the death of his father, and is very aware of the family's precarious status, being newly raised, the holders of Dejima nanban (with its dangerous ideas and goods) but also the exemplars of the "Old Ways".
Toggle signature
Fan of the Week 22 February 2010 - Role PlayAAR of the Month March 2014
Writer of Indies -The AAR which refuses to sell out. Featured on Weekly AAR Showcase 21 July 2010
Holder of El Pip's Platinum Hip Flask (1st Class) for Service to Music & Slovak Culture

Marshal Nikolai Fedorovich Vatutin in Tukhachevsky's Army and the Politburo Admin thread &Update thread.
The Burke clan in Edge of Europe - an interactive AAR of ThunderHawk3
The von Arnim-Boitzenburg clan in Sonderweg oder Anderweg - An interactive AAR in the Hohenzollerns megacampaign

​
Name: Watenabe Yoshitsuke
Class: Samurai
Region: Kansai
Background and trait: Womanizer/Dauntless
Background: Member of the Watenabe family, small landholders, which gained their lands in the Sengoku Jidai, under the banner of Nobunaga. Having inherited his small estates, he split his time between the administering of his lands, and the service of his lord Daimyo.
Last edited: Jun 13, 2015
Toggle signature
Finjamos que tengo algo ingenioso o divertido en la firma

Residency / Laissez-Faire / Free Trade / Pro Military / Moralism
Ideology: Pro Modernization & Moderate Liberalism
​
The Jiko Kyōka-Habatsu is a faction of daimyos of Japan who believe in the need of change, in the need of learning the wisdom of the West, to protect the traditions and beliefs of Japan from the Western covetousness and ambition. Rangaku, the project which create an exchange of knowledges between the Dutch delegation on Dejima, and the building of terakoya, temple schools, should be encouraged by the Bakufu, to protect the Eastern Morality from Westerners by using the their techniques against them. The Jiko Kyōka-Habatsu believes that the Ikokusen Uchiharairei, the Edict to Repel Foreign Vessels, should be repealed, for it and the outdated Sakoku-policy of the Bakufu impair the ability of our defense to adapt Western Techniques and our economy to grow and modernize. The Westerners should be able to reside in various ports, chosen by the Bakufu, if they adhere to Japanese Law, the Jiko Kyōka-Habatsu believes the Westerners should be allowed to trade in more ports than Dejima and with more delegations than the Dutch without the Bakufu intervening with disastrous laws like the Ikokusen Uchiharairei, for western trade and the knowledge it will bring will strengthen both the modernization of Japan and the economy of Japan by giving Japan new ways, both administrative and fiscal, to improve our economy. The Jiko Kyōka-Habatsu also believes that the obtaining weapons, such as motars, fiearms and field guns and the strengthening of our coastal and naval defense are needed, through old and new trade ties that can be opened by the repeal of the Ikokusen Uchiharaisei, protect, as we have stated before, the Japanese traditions and morals, which, under no circumstance, should be sacrificed for the modernization of Japan.

Long Live the Self Strengthening Faction! ​
Named in part for the thunder god Raijin, the Kaminari Dōmei existed as a rather literal alliance of daimyo and samurai, although its earliest members were primarily concentrated east of Kyoto. United through the interests of directing the Shogunate's frame of thought away from the nucleus of Edo and into the broad landscapes that form the rest of Japan. The faction generally has a decisive interest in the maintenance of Japanese society, with or without Western influences.

I shall join the Thunder Alliance!

​
Name: Mōri Takachika (毛利 敬親)
Born: 5th of March 1810 ((was 1819 in real life, but he would be 17.))
Class: Daimyo
Province of Control: Chōshū Domain
Background: The 13th Daimyo of Chōshū Domain, his father ,Mōri Naritō, had just died. The young Daimyo hopes to maintain traditional Japanese society.
Toggle signature
A Nation of Sadness: CWE Republic of China AAR ​
[20:59] <Firehound15> There is a strong argument that if we were to enter a lawless society, we would not devolve into gang warfare, rape, and smuggling.
[20:59] <RobespierreReborn> A prime example is Somalia I will join the Unity and Honour faction instead!

I will join the Self Strengthening Faction, if they will have me.

Name: Takahashi Ake
Date of Birth: 3 May, 1808
Class: Daimyo
Province of Control: Nara, Kansai
Bio: Born as the heir to the Takahashi clan, appointed by the Tokugawa to rule the of Nara in Kansai, once the capital of Japan, Ake Takahashi wishes to see his once-glorious city become one of the great cities of Japan via the path of modernization and reform. With the gradual expansion of commerce and industry in Kansai during the late 1700s, Ake believes that the region could perhaps become one of the most prestigious in all of Japan. However, he fears the subjugation of Japan by the Westerners, as European designs on India and China sent a wake-up call to Ake: that to survive as a Nation, Japan must unify or risk having its ways stripped away forever. This is not to say though that Ake does not believe in Japanese ways, far from it. It is merely that for Japanese tradition to survive, it must be protected from ravenous Westerners via the process of modernization.
Last edited: Jun 14, 2015
Toggle signature
Currently:​
Catarina Mopurgo, Marxist feminist and Republican in ThunderHawk3's Power to the People, pages 393 to ???

​
I shall join the Thunder Alliance, and from this point onward shall count myself among its members. It is the wish of myself and the Yamauchi clan to maintain Japanese society and traditions, as well as to preserve the current administrative structure of the nation. I also believe rushing headlong towards "modernization", or away from it, to be foolish, and hope that the Thunder Alliance will choose the right path in the years to come.

- Daimyo Yamauchi Toyosuke of Tosa
Last edited: Jun 14, 2015
Toggle signature
The Republic of Korea in Twilight Struggle: The Cold War
The Dominion of Canada in WiR 1929

<Rolman99> Oxford is one of those visionaries who comes around every half century or so
<Cheef> oxford // admire me // reee
<oxford> I DIED FOR YOU // <Revan529> HE DIED FOR YOUR SINS // <keldonia> he died for noco's sins >.> // <Revan529> for all our sins // bless him
<Noco19> Because I am inherently kind-hearted and have a vengeful desire to see stupidity corrected, if not in you, then in those who witnessed this exchange​
Show hidden low quality content
You must log in or register to reply here.
Share:
Facebook Twitter Reddit Tumblr WhatsApp Share Link
Top Bottom