There can be only one

I'm sorry to hear about your save trouble, which unfortunately happened just when you finally managed to get upperhand against your archenemy.
Expand signature
"Reddite ergo quae sunt Caesaris Caesari et quae sunt Dei Deo."

In mid year of 558, Tisiphon set his sights on the city of Alexandria.

This was achievable because the Ptolemy family had fractured. They no longer were the bane of Seleucid existance. Now they were just another minor family with some very rich lands under their control.

Every city and every province rose up against their unjust King. They wanted the kinder, more forgiving Pythagorus to rule. Even if he lacked an army for protection.

In less than a week the city of Alexandria surrendered.

Tisiphon held a parade with the former Egyptian King at his side. The parade that lasted a little over an hour, culminated with a crowning ceremony. Ptolemy bowed handing over his crown to the new ruler of Egypt. As Tisiphon put it on his head, the crowd cheered. Not as loud as in Seleucia, but cheering none the less.

Tisiphon called for Ptolemy to stand. There was an awkward glance betreen the two for a few seconds as the crowd quieted. Tisiphon pushed Ptolemy over the edge of the balcony. He screamed as he fell to his death.
T
he crowd was stunned. Nothing like this was expected. A ceremonial execution, but not to be pushed off of a ledge. The crowd roared with a cheer for their Emperor.

But the war was not over. The Egyptian rebels still had to be dealt with.

Tisiphon would not be able to control all of egypt. In december of 558 he passed away, leaving his grandson to ascend to the throne.

Wrought with grief over his fathers passing, Lysander had secluded himself at a young age. Although he was Emperor, he left all matters to his younger brother. Only for ceremonies would he come out of seclusion.

I'm glad to see that you managed to restore your game and this AAR.

Civil war in Egypt was really lucky turn of the events, hopefully you will be equally lucky in the future and Lysander will die soon. He seems to be a walking disaster.
Expand signature
"Reddite ergo quae sunt Caesaris Caesari et quae sunt Dei Deo."

Yes this is awesome!!!

Glad to see you back

Anyways, it seems you got stuck with a lucky king and that you played off the rebels to complete the mission

Its good to see this AAR back, alive and kicking
Expand signature
My Ink Well updated 30 June 2013 Contains AARs, Mods and Projects

The world at the beginning of Lysander's reign.

Lysander was able to bring himself out in public long enough to conquere the last of the Egyptian rebels.

To the West of Anatolia, there was chaos. The macedonians had lost control over the Greek states. Every few years a pretender rose up, and the country would again face civil war. It became so bad that the tribes to the north were taking land from Macedon. The greek states in the South were now rebelling. No longer would they be subjects of a country who could not rule itself.

The turmoil in Greece resembled very much, the turmoil in Lysander's life. he divorced his first wife a few years ago, for her younger sister. His second wife then became jealous of Lysander's children, as they were'nt of her womb. She tried to kill the heir but was discovered. She and her newborn son were banished to Bythinia.

Lysander married again, this time to another nineteen year old. It was again another sister of his previous wives. But she was not one to push Lysander from behind the scenes. She wanted a strong man. Someone her children could be proud of.

Lysanders new back bone did not please his brother, the Governor of Cilicia. But Lysanders lack of action had been beneficial. The treasury was enormous and the army was expanded. The navy was tripled in size. And the cities of the Empire were fortified further and new building were erected.

Yeah Greece is messed up, I would advise straightening them up

Lysander decided that macedon was bad choice for greek security in the West. The only way the Greek people were to be safe, would be for them to be subjects of the Seleucid Empire.

In 580 the conquest of Tylis would be the first step of many, towards protecting his greek brothers from barbarians.

In nine months the country of Tyils, if it could be called such, was nearly conquered.

The Macedonian rebels had been subdued by the Spartans. Lysander offered the rebellious Macedonians safetey in his court. He knew that in order to bring Greece under his control, he would in the least, need people with a claim to the area. And these nobles would find their use in this purpose.

Smart choice. Now you can use greeks vs. greeks.

Overall I don't think Greece should be too hard to conquer, but I have heard that they have large manpower reserves.

This manpower problem does not exist for me, due to Macedon being in constant war. But it make for a good story, while you are helping your sister move, and have little time to play. Hopefully my next on will not be such a cliff note
Expand signature
I must break you.

Hmm, soon the east is united.
No civil wars in your realm?

No more civil wars. The Empire make over 60 gold a month. So bribes are not a problem.
Expand signature
I must break you.

Greece is so divided that biggest issue you have to worry is bad boy for annexing all the small states.
Expand signature
"Reddite ergo quae sunt Caesaris Caesari et quae sunt Dei Deo."

i look forward to the update awesome aar. if you are in need of manpower take greece. they are your culture and will provide men for your conquest of egypt!
Expand signature
If you succeed, prepare to be crucified.

Lysander's war with Tylis went very well. Over one hundred thousand troops were now ready to attack Macedonia from the North.

With Macedonia allied with dacia and Illyria, Lysander was able to make war with Macedon, without declaring war on Macedon.

By 584 Dacia had been made a tribuyary, and Macedon was forced to cede all of Greece proper. 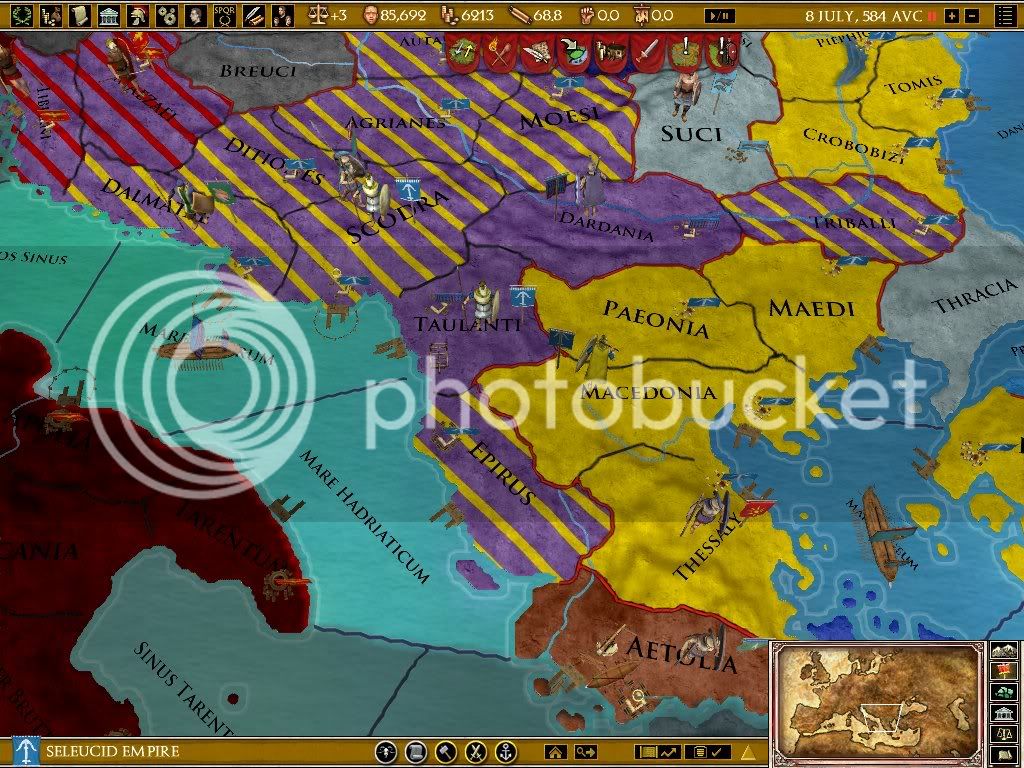 Many countries were now at war with Illyria. Rome declared war a few years earlier. This worked to Lysander's advantage. With Illyria destroying Epirus, the Seleucid Emperor would be able to demand the city without war with Rome.

And in September the war was over. Great building projects were enacted in every city across The Empire. The treasury builing was expanded in size to accomodate all the wealth more securly.

In November 584 Lysander had enacted the "No Child Left Behind Act". And this would need to be properly funded to ensure its success, and eventual admiration of Lysander's reign. And so, academies were constructed in every city.

The world map drawn up by Lysander's son had shown an interesting development. Carthage was expanding in the West, and Rome had conquered nearly all of the barbarians North of them. Of these threats the council decided that war with Carthage would be the most beneficial. But after the Greeks were integrated.

The date, 4th of April 585. Lysander is contemplating the request of the council to declare war on Carthage.

Lyasander to the council "War with Carthage would be unjust, as of now. We must wait until ALL Greeks are united under one banner."

Pythagorus Sociclid "The Carthaginians present an ever growing threat. They position nearly fifty thousand soldiers on our borders. And yet you do nothing about it. Do you wish to look weak to the world. What would our allies say to this fear you possess?"

Pythagorus is cut short by Lysander "You dare speak to me as if I am your euqal? Although I value your critisism you go too far. There is a slight difference between a good question and chastisation. What you are suggesting, is that I am stupid."

Pythagorus interupts "No my Emperor! I am merely pointing out the perception you are presenting to our greek allies in Anatolia."

Lysander "Is this truely the position they take? Do they see me as weak?"

Pythagorus "Yes my Emperor. I am afraid so."

Lysander " Then it is time we deal with them. If all greeks are to be united, this will mean the release of rule over our allies peoples. I see no way other than war with them. After this Carthage will be dealt with. If not in my time, then in my son's. And if not in his, then his son's. The Seleucids will rule over every city on this land given by the Gods."

And with that, a doctrine was set that would last many years. When the Seleucids had conquered every city, only then would peace be known to her people.
Expand signature
I must break you.

Oh geez, you are heading in the wrong directions *frantically waves hands*

It seems the world is divided up into 3 hemispheres, so I say, kick carthage's butt

Hah, when you achieve peace, the huns come!

Just read through the entirety of this and I have to say that I am glad you went to the pains of editing the game to restore your save. This is a good and also an amusing read. I'm looking forward to more of it.
Expand signature
Furor Normannicus
An AAR of the exploits of the Norman de Hauteville dynasty