Anyway, it seems as if the realm is becoming more centralized.

Hope this isn't dead, by the way, considering it has been more than a month since the last update...
Click to expand...

It's not dead, just sleeping lol.
Toggle signature
Check out my AARs!
-CK2: "History of the Kingdom of Strathclyde"
-CK3: "The Dance of the Nutcrackers - An Albigensian Tale"
Reactions:

Awesome to see this AAR coming back.
Toggle signature
I suffer from obsessive-compulsive commentating disorder.

Check out my AAR The Crusader Queen.
Reactions:
C

It's back, it's back!!! *Cries in Gaelic... Very excited to see the Norse driven out of Northumberia, the Kings of Strathclyde are rapidly devloping the Kingdom into a formidable regional power, perhaps only matched by Wessex... Excellent chapter!
Toggle signature
“All men have their frailties; and whoever looks for a friend without imperfections, will never find what he seeks.”
― Cyrus the Great

yey its back what a great update!
Reactions:

The Celts look to be doing well.

"The road to hell is paved with good intentions."
Tempus et mort vincent omnia - Time and death conquer all
Reactions:

HOW THE NORSE PAGANS ADAPTED THE NORTHUMBRIAN TRADITIONS AS A LAST GASP AGAINST THE TURNING TIDE​
After their devastating loss at the hands of the Cumbrians and the Saxons, the Northumbrian King embraced Christianity wholeheartedly, hoping it would discourage his neighbors from finishing the conquest of his lands, buying some time to rebuild his forces, and perhaps attract mercenaries from Scandinavia to bolster his ranks. Ultimately, his attempts at turning the tide were futile, for his own subjects, now forcefully converted, resented Guðfríð, viewing him as a traitor to their forefathers' ways, leading to his murder and usurpation by his twin brother, Ragnarr.

Northumbria was no stranger to regicide, as during the times of Anglian dominance in the region by the Kingdoms of Bernicia and Deira, their respective Kings would oft perish at the hands of their enemies, often their own relatives, with few experiencing a natural death. The more things changed in Northumbria, the more they remained the same.

The late King Guðfríð, and the new monarch of Northumbria, King Ragnarr​
King Meirchion himself has sponsored Guðfríð's conversion, and thus his death threatened to endanger the tenuous peace he had just acquired on his southern border, forcing the Cumbrians to intervene in Northumbria's affairs, lest the Saxons advanced upon them before they could stabilize and broke the balance of power in Britain. As the Northumbrians struggled to amass behind Ragnarr's banner, Meirchion faced no opposition in his campaign, easily overpowering any would-be defenders of Ragnarr's new reign. The bulk of Ragnarr's host constantly fled at the sight of the Cumbrian banners, but would ultimately be trapped by the coastal town of Bridlington, where the Norse forces were slaughtered to the last man, in a futile attempt to locate Ragnarr, who had gone in seclusion hoping to be spared from the onslaught. 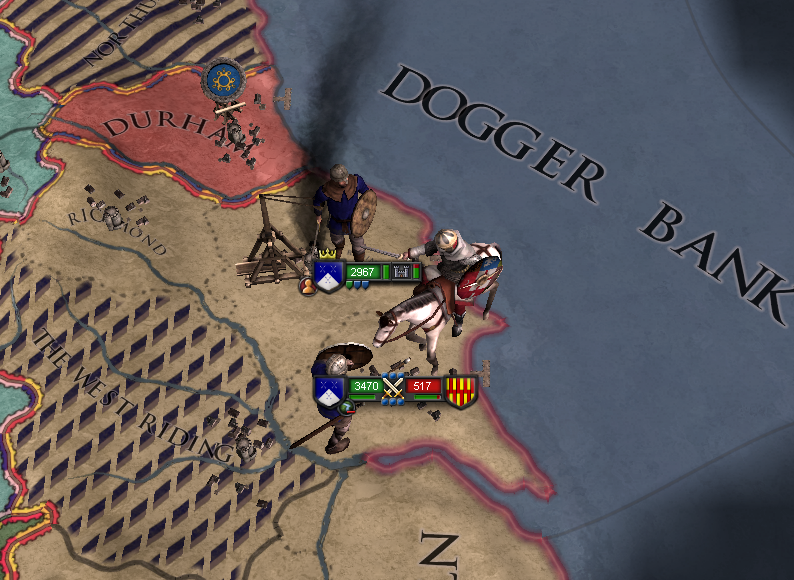 The Battle of Bridlington, February of 895​
Despite his best attempts at hiding, King Ragnarr was eventually found pretending to live a life as a peasant in the borderlands to the South, and was quickly sent to the gallows, putting an end to his short reign, and leaving behind yet again, a vacuum of power in the unstable Kingdom. This state of lawlessness allowed King Alfred of Wessex to march his troops North, into Northumbrian Mercia, laying waste to their defenses, and annexing half of the Kingdom for themselves. A Northumbrian buffer state between Saxons and Cumbri seemed more unfeasible by the day, and Meirchion would be forced to make a move for the crumbs left on the wake of the Saxon conquests.

The death of King Ragnarr, August of 895​
Toggle signature
Check out my AARs!
-CK2: "History of the Kingdom of Strathclyde"
-CK3: "The Dance of the Nutcrackers - An Albigensian Tale"
Reactions:
C

The tide turns against the Northmen, but perhaps it will upset the delicate balance of power between the Britons and the Saxons... Hopefully the Briton king's can expand further, perhaps into Ireland to gain the coin and men needed to fight the Saxons...
Toggle signature
“All men have their frailties; and whoever looks for a friend without imperfections, will never find what he seeks.”
― Cyrus the Great

CHAPTER XII
A NEW CENTURY​
Whilst the House of Hvitserk struggled to regain control over the Kingdom of Northumbria, a rebel leader named Hrolfr had begun to amass popularity among the peasantry, posing a possible challenge to Meirchion's dominance. Hrolfr had been virtually independent for a few years now, but the current state of Northumbria made him in fact the most powerful of pretenders to the crown, and thus Meirchions' latest target, who defeated the forces of the pretender in November of 895, and fully pacified his realm by March of the following year. This would isolate the capital of Northumbria by land, as the Cumbrian forces settled down in the region of Durham, further preventing the consolidation of power by the Norse.


With his armies still raised, Meirchion spent the remainder of 896 in the Northern reaches of Britain, sacking the struggling Scottish kingdom in order to fund the final campaign against Northumbria the following year. There would be no respite for the neighbors of Strathclyde, not as long as Meirchion reigned supreme. 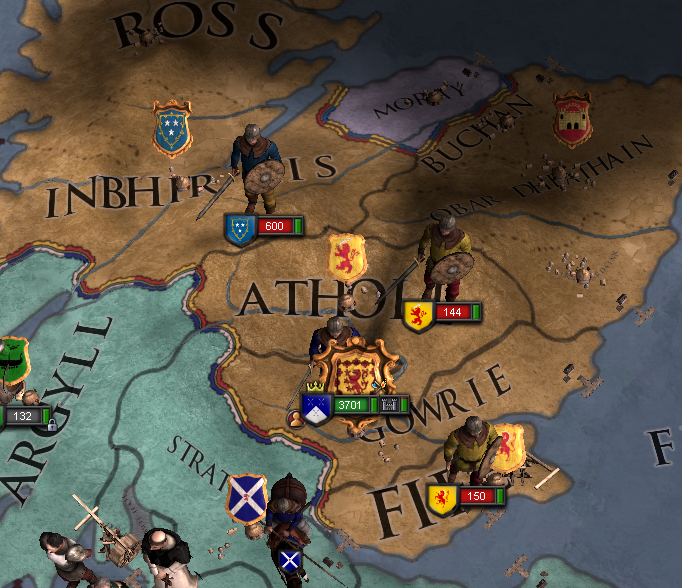 By January of 897 the Northumbrians had selected their new monarch, a dwarf claiming to have the blood of the Hvitserk running through him, leading a small host of less than a thousand men. Small enough to not oppose any Cumbrian incursion, but large enough to subjugate what remained of the Northumbrian nobility. The new king claimed to have abandoned the White Christ and returned to the old ways, which earned the ire of Meirchion whose treasury had been filled to the brim after the latest season of Scottish raiding. The armies of Strathclyde rained upon the newly crowned heathen, flipping the last page on the decaying kingdom of Northumbria. As the year 898 began the dust had settled, and the Northumbrians hid behind the walls of Bamburgh, the last Norse fortress in the British mainland. 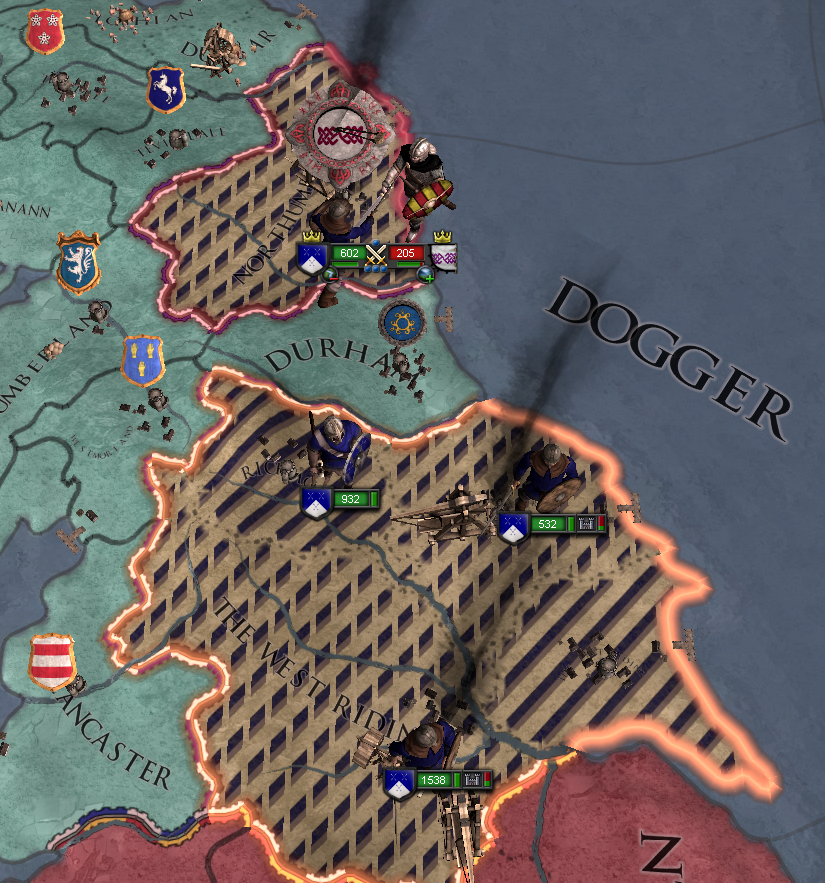 ​
As the new century approached, Meirchion had finalized the conquest of Northumbria (bar Bamburgh), rejoined the European mainland through his embrace of feudalism and embracing of Papal Authority, subjugated and placated the nobles within his realm, organized new laws and codes to rule the lives of the Kingdom's populace, and had built a strong state apparatus from which his successors could expand on all directions, with the dream of retaking the entirety of the island from the English invaders that had so devastated the Briton kingdoms of old.
The newly acquired border with the nascent kingdom of England presented a new challenge for Meirchion, but also an opportunity for expansion and riches. The petty kings of Wales remained fiercely independent, but if they could be brought unto the Cumbrian fold they could provide the necessary manpower to take on the English.

The Scottish kingdom remained in shambles, and while poor, securing it would be of utmost importance for a shrewd Cumbrian king, lest it became the landing site of a new Norse invasion that could threaten to retake Northumbria, and just across the pond lays Ireland, nominally under the rule of the kings of Tara, who swore loyalty to Meirchion, but increasingly looking for a way out of such one-sided deal. A strategic betrothal between Meirchion's daughter and heir Denyw and the third son of the Irish king appeared to have bought their continued support, but as the young man took on the vows and married the church, the Cumbrian princess was left without a husband-to-be. Meirchion would have to weigh in carefully where to strike next, perhaps looking to Rome for answers...

With the Vikings purged conflict between the Saxons and Britons is inevitable.

I would suggest marrying the King's daughter to a Welsh Prince, assuming you haven't mentioned matrilinial marrige so I assume you can continue to play even if a new dynasty gains the throne.
Toggle signature
I suffer from obsessive-compulsive commentating disorder.

Check out my AAR The Crusader Queen.
Reactions:

JSB217118 said:
With the Vikings purged conflict between the Saxons and Britons is inevitable.

I would suggest marrying the King's daughter to a Welsh Prince, assuming you haven't mentioned matrilinial marrige so I assume you can continue to play even if a new dynasty gains the throne.
Click to expand...

Well among the many laws passed throughout the adoption of Feudalism was that of women being able to inherit, so Meirchion is definitely aiming to keep his line in power, after all, you wouldn't want some Welsh randos to just claim all the glory after you restored Briton rule to the island .
Toggle signature
Check out my AARs!
-CK2: "History of the Kingdom of Strathclyde"
-CK3: "The Dance of the Nutcrackers - An Albigensian Tale"
Reactions:
M

What is wrong with the Princess where the Irish lad would rather marry the Church than become future King-Consort? Thank you for returning and please be safe!
Reactions:

Midnite Duke said:
What is wrong with the Princess where the Irish lad would rather marry the Church than become future King-Consort? Thank you for returning and please be safe!
Click to expand...

Well the Irish have always had that fierce and independent nature y'know? By marrying the Princess they sorta bow down to another man, whilst everyone, including Meirchion and the Princess, bow to God. But really, who knows why the AI does things .
Toggle signature
Check out my AARs!
-CK2: "History of the Kingdom of Strathclyde"
-CK3: "The Dance of the Nutcrackers - An Albigensian Tale"
Reactions:

The Norse are exiled from Britain. Sadly, the Saxons may prove to be greater enemies...
Toggle signature
I have a megacampaign AAR as Byzantium here. This got me Best Character WritAAR of the Week for April 26. It also now has a spinoff in OT - The Demetriad
I have a poetic AAR on the Romano-Mongols here.
I have a Stellaris AAR here.
I have a CK3 AAR here.
I have another megacampaign AAR (this one as Epirus). Part 1 is here.
I also have a Victoria II AAR here.
Other AARs of mine are at my Inkwell
I was Fan of the Week the weeks of February 10th,2019, September 1st,2019, and August 16, 2020. I was WritAAR of the Week the week of November 22, 2020.