Jump to latest Follow Reply
Menu
Install the app
You are using an out of date browser. It may not display this or other websites correctly.
You should upgrade or use an alternative browser.
Europa Universalis IV 77501 EUIV: Suggestions 16868 EUIV: Technical Support 6107 EUIV: FAQ & Strategy Guides 203 EUIV: AAR's, Let's Plays, and Fan Fiction EU IV: Alternate History Short Story Contest Contr 26
Show only dev responses

The Philippines are a large and rich archipelago in the game which are terribly unrepresented. Historically the Philippines were colonized by the Spanish from the early 16th century but at the game start the islands were full of religiously and culturally diverse kingdoms, sultanates and rajahnates.

Im proposing a solution whilst it may not be the most historically accurate (i dont know what sources the researches use) but i hope the devs will take it and improve it hopefully implementing into their next expansion which i know a lot of us hope is Asia.

Firstly i think the Philippines deserve their own region. It is a large group of islands large enough to merit a region named the 'Philippines'. as its currently under the region of the 'Moluccas'. 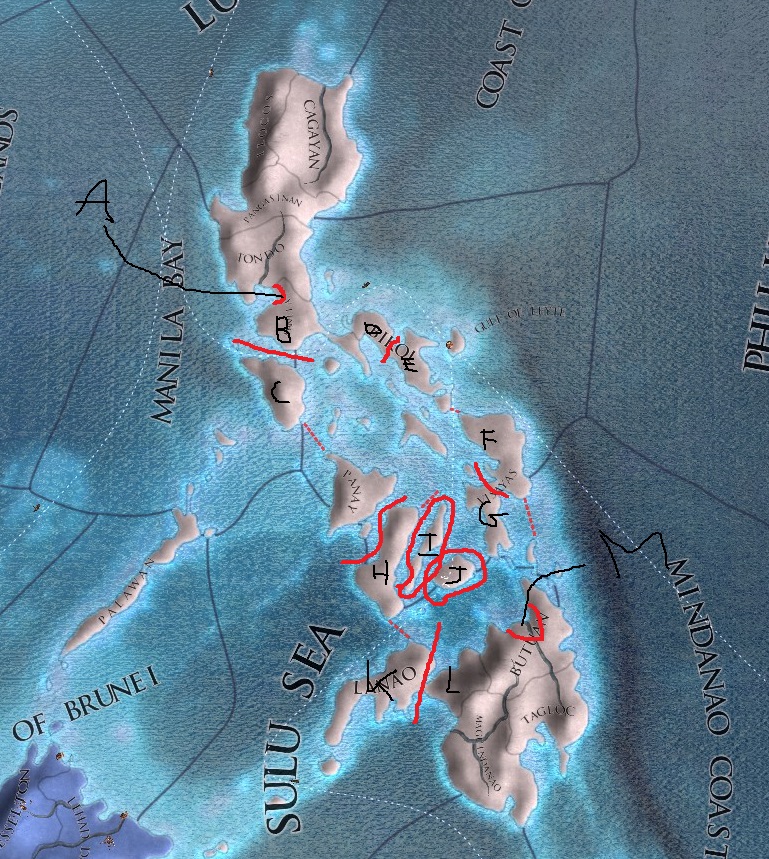 A- This will be the city province of Manilla but named Maynilla. It will also be a centre of trade and the centre of the Manilla trade node

Now for the new tags

I propose 8 new tags in total which will all have different religions ect.:

Kingdom of Maidh - 1 province which is Mindoro, religion is Vajrayana

Kingdom of Pasanginan - 2 provinces of Pangasinan and Tondo with the first being its capital province and the city being Binalatongan, religion is Vajrayana

Tondo - 3 provinces of B, D and E with its capital being in B, religion Hindu

Madyas - 2 provinces of Panay and Buglas with its capital being Panay, religion Hindu

All other provinces will remain uncolonized

There are a few other aspects ive yet to talk about such as NI's but i will mention these when/if this gets enough support (hope it will!)


Thats my proposition and i really hope that one of the devs such as @DDRJake can have a look at this and consider it for the game. I do stress that i got a lot of this information from Wikipedia but you devs can use your sources to make it more accurate if needed and i think the core of it is quite accurate and the idea is quite complete although it still needs a little bit of work i believe including the Philippines in the game will really add to the flavour of playing in South East Asia and especially in Malaya/Indonesia.
Last edited: Apr 22, 2016
Toggle signature
Better representation of Armenians in Anatolia

You can't really compared Java and the Philippines. First is smaller, true, but very densely populated while pre-modern Philippines were in comparision pretty sparesely populated.

Whilst that may have been the case the Philippines are still underrepresented in the game and this have cutues which were significantly populated such as Manilla. Also thanks for the link didn't see that thread I'll post my suggestion there and see what people think
Toggle signature
Better representation of Armenians in Anatolia

Someone already linked you to the thread here are my contribution to it summed up:

I think the NI's are really good and represent the different countries well. I Defo think the devs should consider re-working the Philipinnes and it shouldn't be that difficult as we've done all the hard work for them!
Toggle signature
Better representation of Armenians in Anatolia

I know a man who would like to see this, and his name is @Trin Tragula

Milan23 said:
I think the NI's are really good and represent the different countries well. I Defo think the devs should consider re-working the Philipinnes and it shouldn't be that difficult as we've done all the hard work for them!
Click to expand...

Thanks let's hope the Dev team agrees with us
Toggle signature
Eu4:

Milan23 said:
Thanks for the reply at least we know the devs take our ideas into account
Click to expand...

Oh we certainly do.
Just wanted to pop in to say that I've also read this
Toggle signature
No fighting in here! This is the war room!
Reactions:

Trin Tragula said:
Oh we certainly do.
Just wanted to pop in to say that I've also read this
Click to expand...

Trin Tragula said:
Oh we certainly do.
Just wanted to pop in to say that I've also read this
Click to expand...

That said, check out this thread:
https://forum.paradoxplaza.com/forum/index.php?threads/the-phillipines.900409/
Click to expand...

That's true. At most, when the Spanish came to the Philippines, there were only about half a million people and you have to divide it among several port kingdoms. Constant inter kingdom conflict and disasters made sure the population density was low.

I hope nations in the Philippines become a thing. I always thought it was a shame that there wasn't nations in that place, since it seems like a cool place to set up a naval empire.

Heres my take on the Philippines: