The Origami Empire: a Nippon AAR

Seriously. You get another century of this....
Expand signature
"Gather ye rosebuds while ye may,
Old Time is still a-flying;
And this same flower that smiles today,
To-morrow will be dying."

My Victoria AARs:
Liberation From the South, Or How To Run A 1.02 Economy: A Two Sicilies AAR

Delusions of Grandeur: Korea is Choson

Hmm! Thanks for the advice, calcsam2. I just did it! 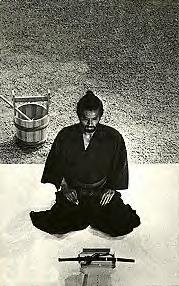 And from the afterlife I will just note that I now understand why almost every AAR started as Nippon has been abandoned. Here’s the latest delicious event, which hits in 1495: 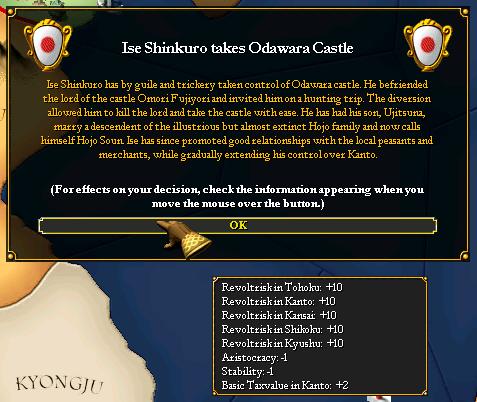 Decision? What decision? No actual revolts, but a whopping +10 revolt risk in the five mainland provinces. This would perhaps be liveable with, except that these don’t drop down again until 1564! Enjoyable as it might be to do wacky write-ups of these “troubled years” as the glorious Nippon Empire rapidly disappears down the toilet, it’s not really my idea of an enjoyable game. What amazes me is that this scenario is actually used as a plug for the game on the back of the box:

“Choose sides in the struggles of the Ashikaga Shogunate in Japan that for 200 years was torn by civil wars!”

I wonder how many people have bought EUII, tried this scenario as their first game and then thrown the whole thing in the trash! OK, I suppose the thing to do is to get your DP sliders optimized for quelling revolts and then try to weather it. Me, I’m off to find another country to play!

PS Sorry to spoil the fun Rirre (and others!) Watch out for my next adventure, which will no doubt be coming soon...
Last edited: Feb 15, 2009
Expand signature
Fide et Fortitudine


Recently completed Use of Weapons, a Stellaris AAR

My Inkwell - links to all vintage Farquharson AARs from EU2, EU3 and CK1, and more recent Stellaris AARs​

What? so its over already? just when i started reading too.
Expand signature
Can you imagine what I would do if I could do all I can? - Sun Tzu
​

Well, after that rather impetuous act I decided to give the game another go and played on for a while. A brief summary of what happened:

During the worst years, from 1505-1542, the government of Nippon fell fifteen times. Basically I just retreated to my Korean provinces and let the rebels get on with it. Here's a typical scene: 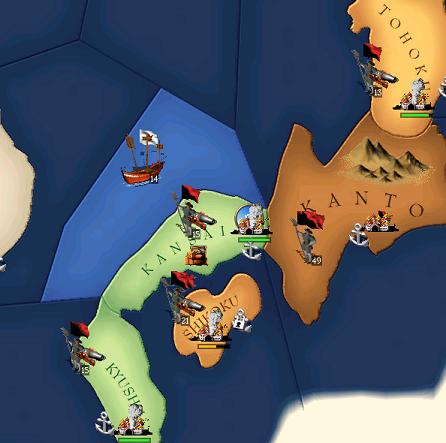 Meanwhile I actually managed to establish a trading post then a full-blown colony in Taiwan. This is where most of my gold went during this period. Early on Seoul revolted away and became Korea reborn, but I still held Kyongju, the southern Korean province.

Eventually in 1542 (earlier than I was expecting) the revolt risks came down again and a semblance of normality returned to the Origami Empire. MY VPs were somewhere in the negative four figures .

Then I got a diplomatic insult from Korea, and declared war, allied with Manchu. Unfortunately Korea was allied with China so I suffered a bit. I got back Seoul but had to cede Kyongju to China. Not a bad exchange, however.

I had moved to full naval in the hopes of a random explorer to start my epic voyage across the Pacific but by 1558 he still hadn't appeared and another round of revolts was tearing the Empire apart (not scripted, just some unhappy peasants, I think).

At this point I decided that I really had had enough. I had survived the Sengoku after a fashion, but the game still wasn't really going anywhere. I thought I would do a quick update anyway so you could see what I was giving up .
Last edited: Feb 15, 2009
Expand signature
Fide et Fortitudine


Recently completed Use of Weapons, a Stellaris AAR

My Inkwell - links to all vintage Farquharson AARs from EU2, EU3 and CK1, and more recent Stellaris AARs​

Didn't I say 'good luck' in the beggining?? Nippon is 'tuff.

VPeric said:
Didn't I say 'good luck' in the beggining?? Nippon is 'tuff.
Click to expand...

Yea...many rebellions in Nippon.
For all Nippon players : make sure you handle the rebels by crush them with your cavalry.
So Farquharson, make many groups of cavalry
Expand signature
Everyone dies, not everyone really lives (quoted from Braveheart)

HoI2 AAR
Can you win war only by militia? Check this Militia Power- USSR AAR - halted

Admiral of the Kings Fleet

Bah Cavalry is so expensive, i like to use waves of cheap infantry instead but this AAR is interesting, good show
Expand signature
What a Game!

Warspite said:
Bah Cavalry is so expensive, i like to use waves of cheap infantry instead but this AAR is interesting, good show
Click to expand...

And cavalry is crappy in mountains and forests.

I was expecting a full AAR here. Oh well.

Onto the next volume of the Farquharson cycle...