Oh, how the mighty have fallen... Once-great Ming, reduced to an OPM and a tributary of Chagatai. And... they're Sikh now? 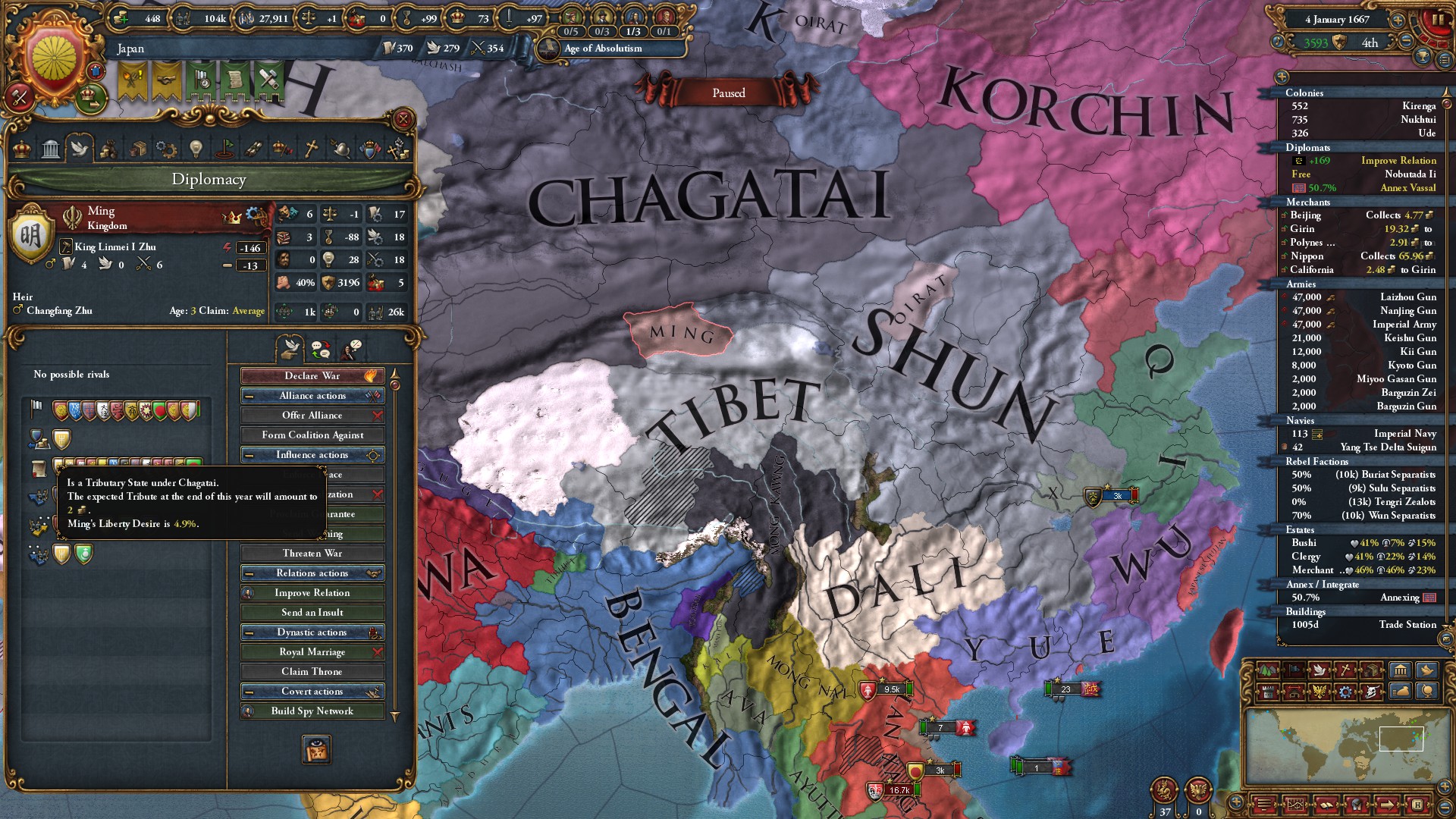 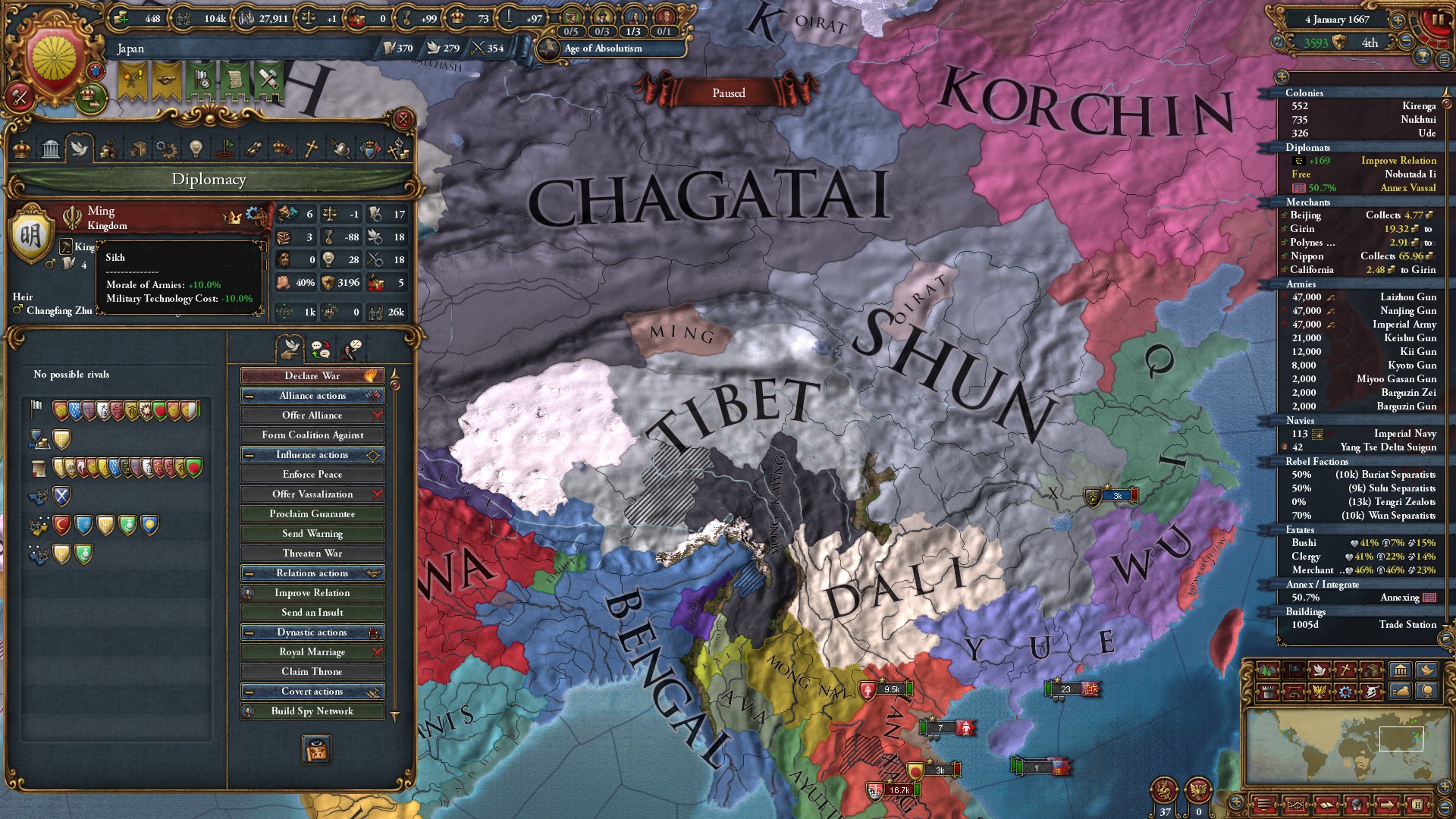 Later on they became Sunni, and have now reclaimed a handful of provinces since Shun has been getting wrecked. Their time will come again soon - they're now bordering my vassals.
Reactions:

I'm a little concerned by my ally's grasp of geography:

That's like the coast of Brazil; a little warmer than l'Antarctique . . .

And yes that little round thingy beside the Imperial Eagle indicates the Russians are having their revolution two centuries early . . .
Expand signature
"Whatever doesn't kill me makes me stranger"

Tisifoni12 said:
I'm a little concerned by my ally's grasp of geography:
View attachment 632243
That's like the coast of Brazil; a little warmer than l'Antarctique . . .

And yes that little round thingy beside the Imperial Eagle indicates the Russians are having their revolution two centuries early . . .
Click to expand...

This was the name of the French Huguenot colony in the Rio de Janiero bay. At teh time, "antartic" was sinonymous to "austral".
Expand signature
• Project Lead for M.E.I.O.U. and Taxes
• Subforum | Steam Workshop | Discord | Facebook | Twitter | Cartographer's Office

It atill is. Arctic is derived from arktikos, which means north. Antarctic is anti-arctic, aka against-north aka south.
Expand signature
Achievements: 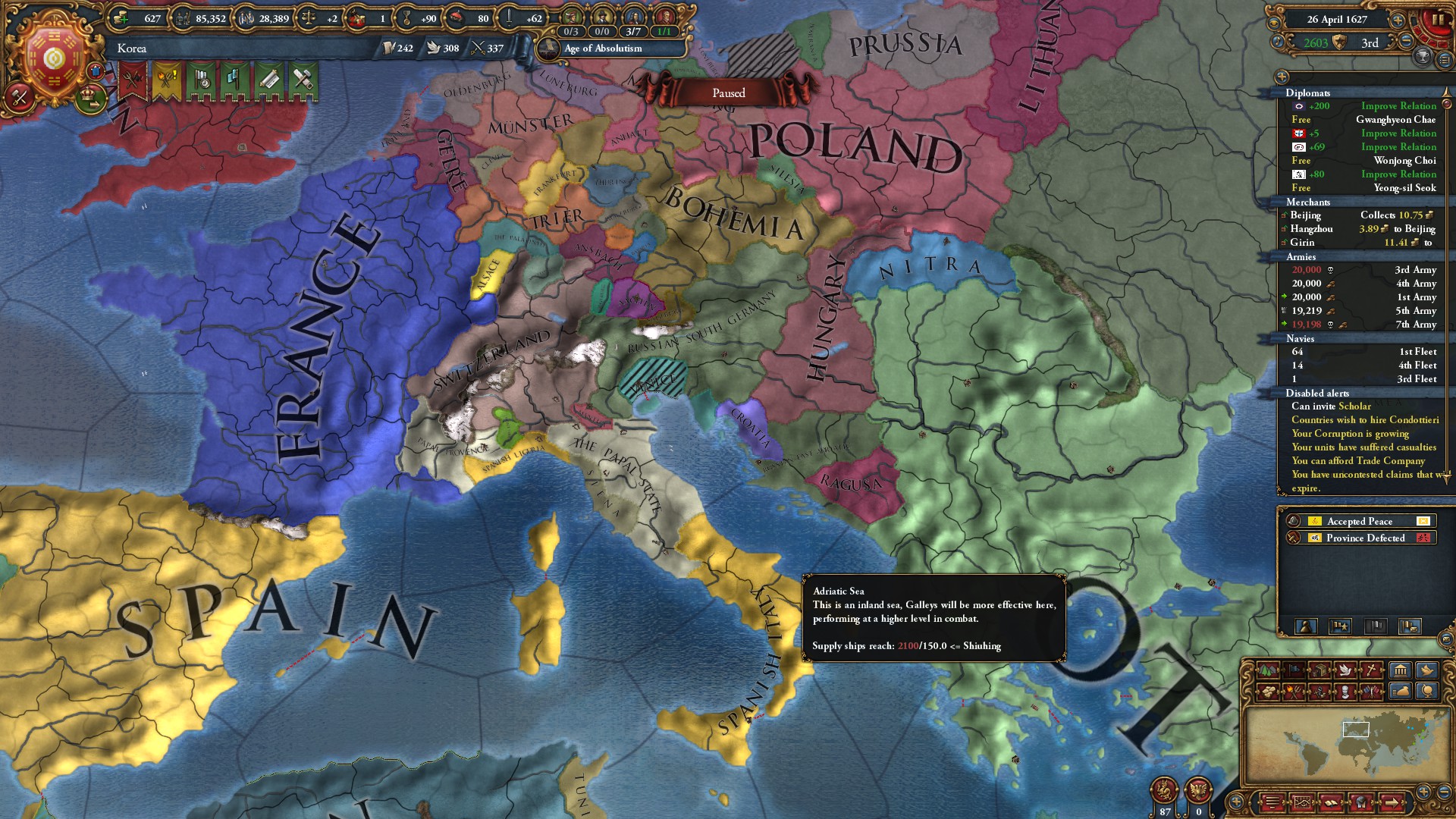 iClipse said:
I'll just leave this over here (played in 1.29)

Who is the emperor? Bohemia?
L

Probably successful PU of Russia and Austria.
I

Kialandri said:
Who is the emperor? Bohemia?
Click to expand...

Honestly, I can't remember. Since I was playing Korea I wasn't really paying attention. It was one of the funniest Personal Unions I've seen.
Reactions:

Ming had a bad time this game. It is sitting for more than a century on 0 mandate with no tributary and two big nomad tribes (Tchagatai and Manchu) on its border, and probably only escapes invasion because it was my ally (I am Spain, 1st world power).

Also when Tchagatai lost a war while trying to invade India, and was forced to cancel its alliance with Ayutthaya, the latter country has no more ally and was my neigbour in Malaysia, so Ming attacked it to make it a tributary and called me in the war.

Well I did most of the work (actually raised 6 60k merc companies in the area and a dozen infantry regimenst for carpet sieging, and send 140 galleons to rule the sea). Ming had 500k men on the border but still manages to let an enemy 35k stack pass between them and go all the way up to Peking, starting to siege it. Then all Chinese armies turned back and marched to Peking to save it. At least they succeeded. The time they came back, Ayutthaya was a wreck. It has still an army but no more fleet, no capital and only two forts remaining.

But then Ming decided to make peace and was really well paid for its contribution:

Yes, Ming won 508 power projection in this war !!!! Seems to make Ayutthaya a tributary really does it !
Reactions:
B

Now I'm curious what negative trade power would do if you tried to collect in the node.

Literally the first month it could possibly spawn! And in my last game as Austria, it didn't spawn until the 1760s even though I needed it to complete the mission tree. 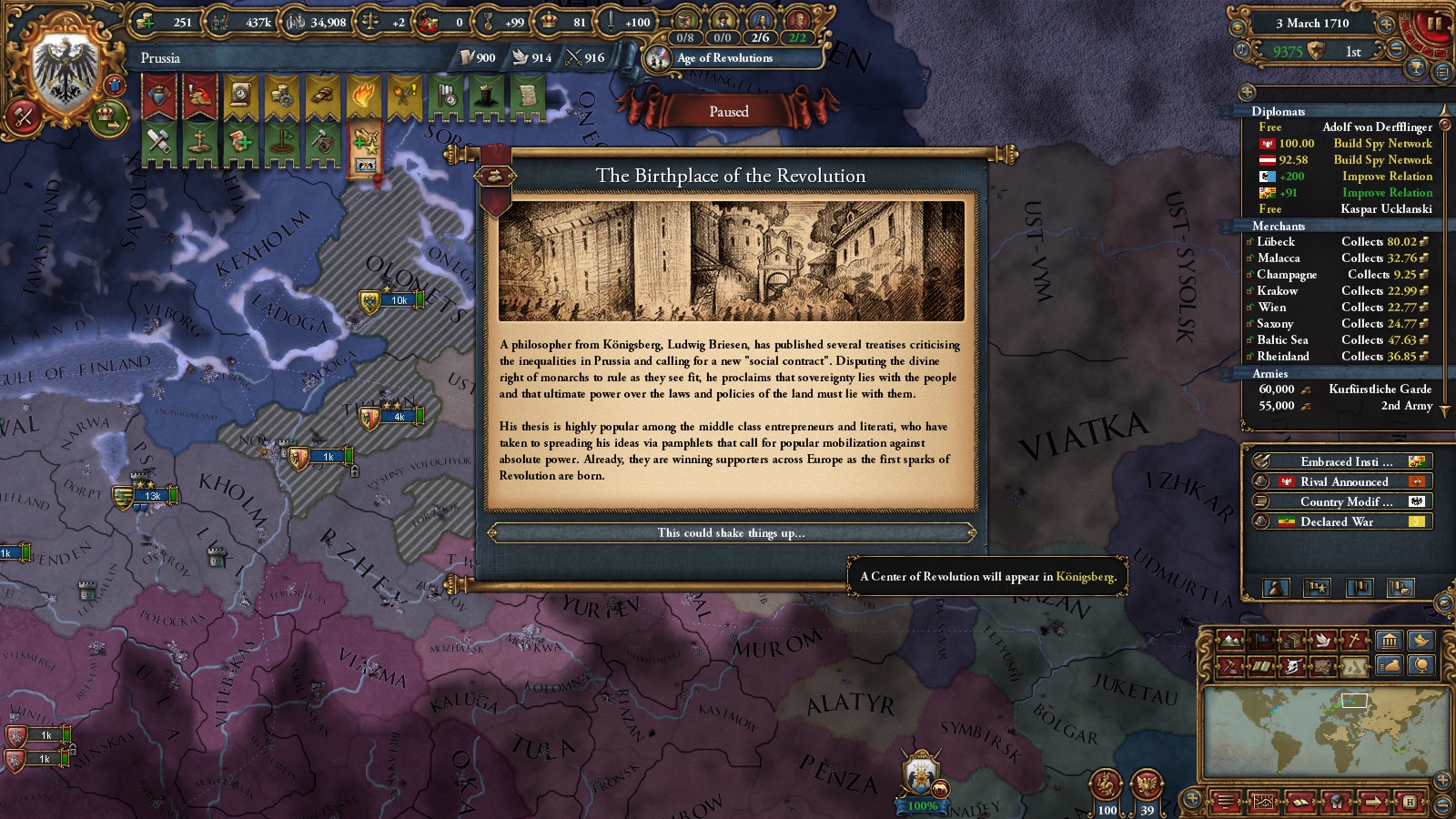 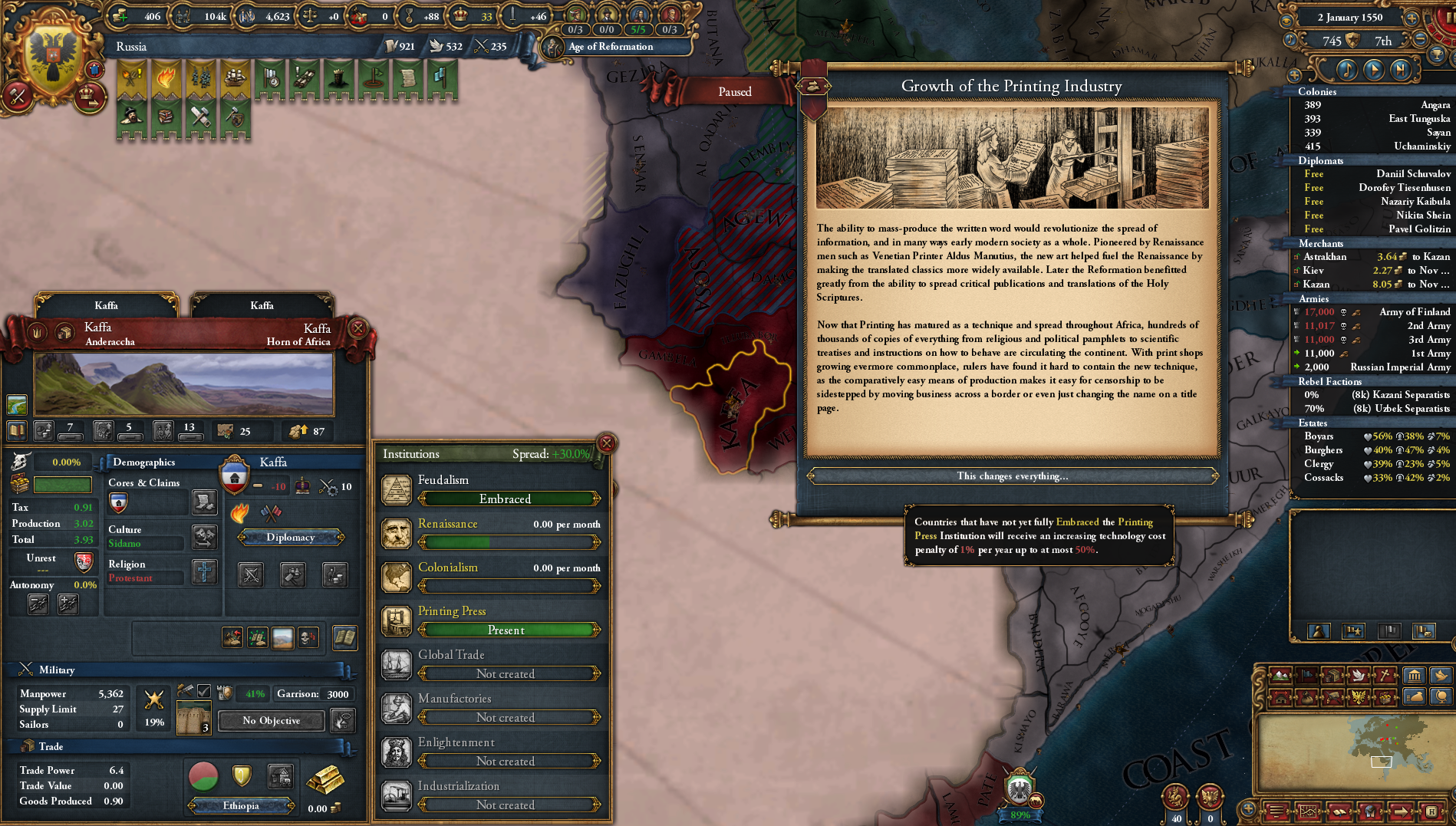 this is a first. im not even mad.
Expand signature
What do you call the dog of a spanish conqueror?
A Conquistadoggo!
Reactions:
V

I don't know if you ever seen it but AI Korea spawned by themselves Renaissance. 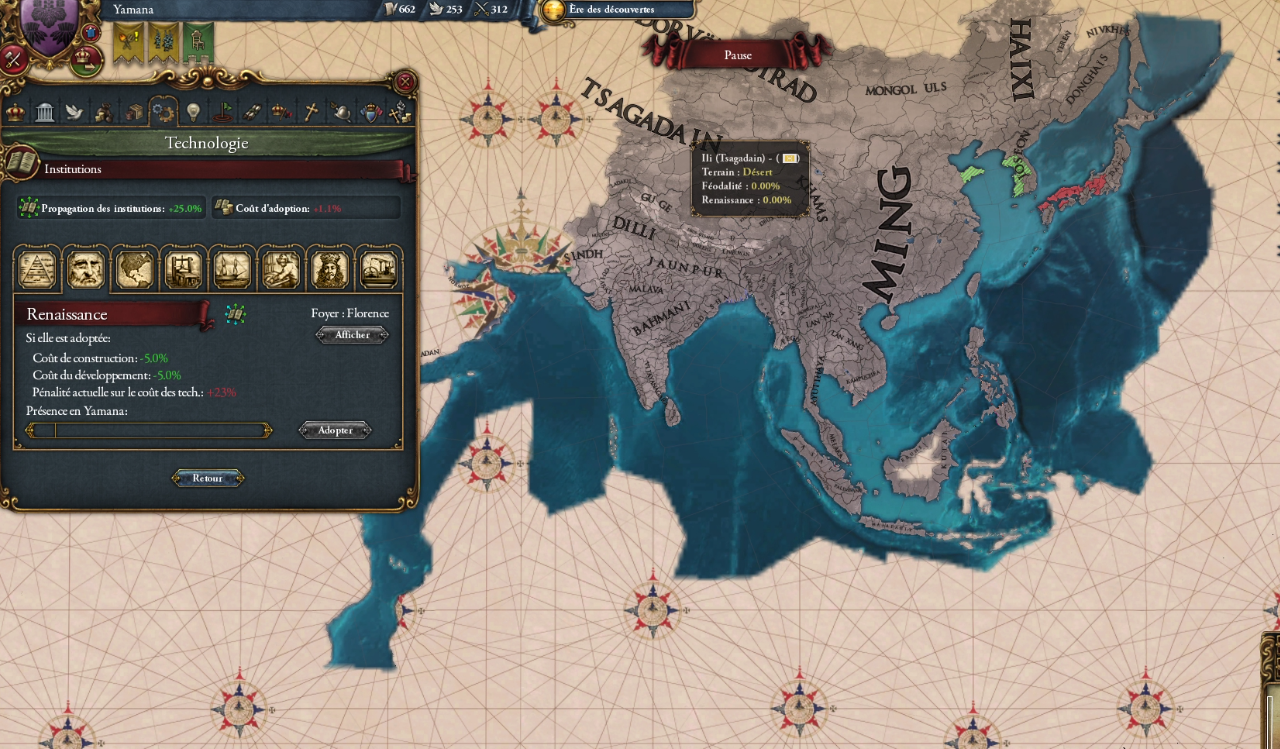 Just going to leave this here... 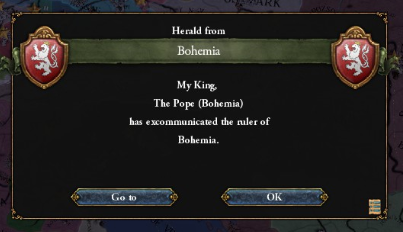 Vince75 said:
I don't know if you ever seen it but AI Korea spawned by themselves Renaissance.

It's actually quite common, Korea and China develop land a lot and Korea in particular can't really spread that development out much.
Reactions:

I've seen reformation spawning in some weird places but this is a first for me. 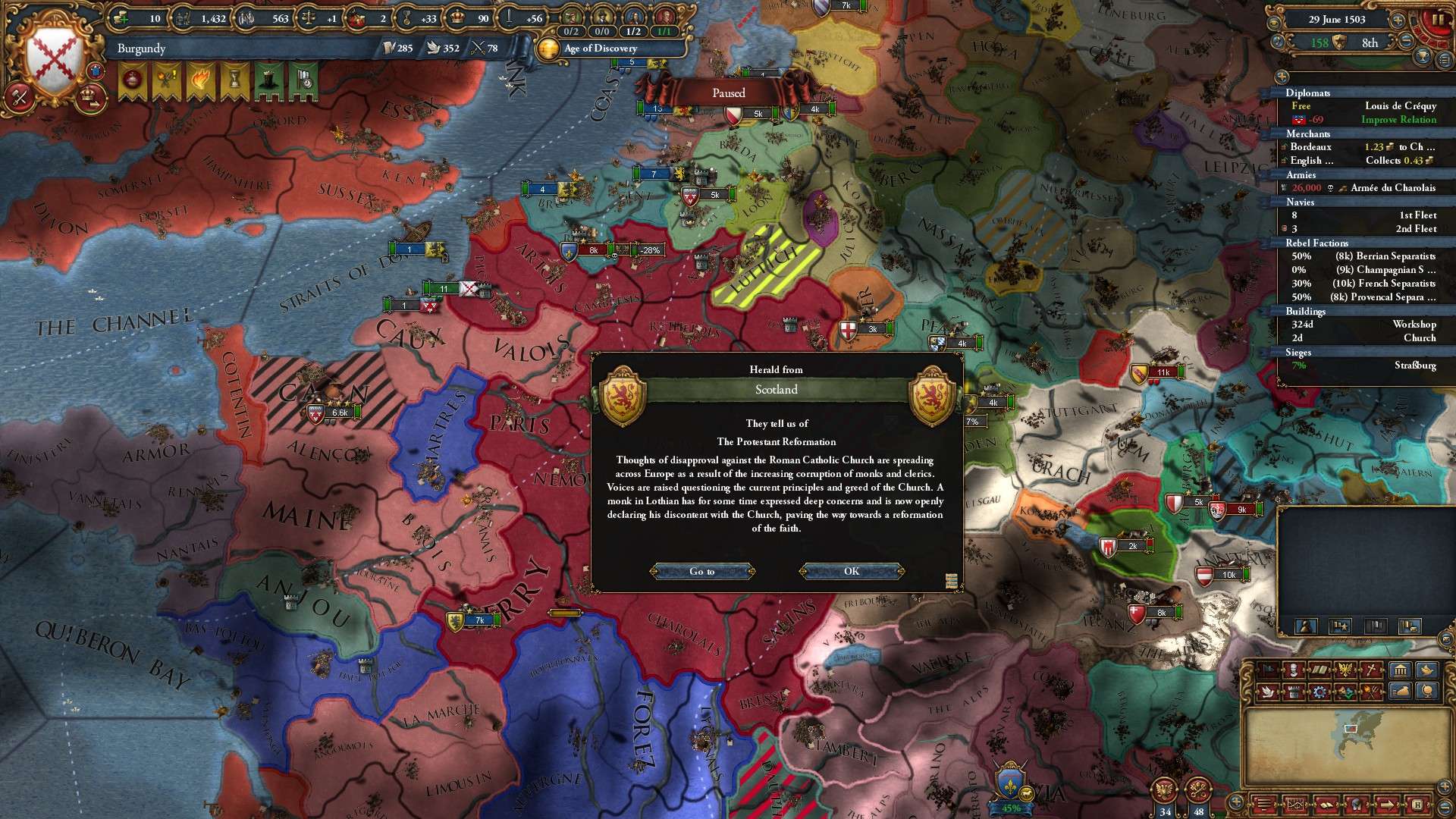