Jump to latest Follow Reply
Menu
Install the app
You are using an out of date browser. It may not display this or other websites correctly.
You should upgrade or use an alternative browser.
Europa Universalis IV 79059 EUIV: Suggestions 17734 EUIV: Technical Support 6349 EUIV: FAQ & Strategy Guides 213 EUIV: AAR's, Let's Plays, and Fan Fiction EU IV: Alternate History Short Story Contest Contr 28
Showing developer posts only. Show all posts in this thread.
Show all posts

Xara said:
What is hard about max tech as Poland?
Click to expand...

Chewy Yui said:
I like that Master of India is "normal"

They're categorized on the wiki the same way they are in the achievements.txt file. No clue why Paradox categorized them like that.
Toggle signature
~ Magne Skjæran - Crusader Kings 3 programmer
Follow me on Twitter for out of context quotes from Paradox

What a dastardly move by the AI. They didn't want the colony at all, they just wanted me dead.
Toggle signature
The Three Mountains: EU4 Ryukyu World Conquest AAR
​

Konair0s said:
I thought there was something about some travelling guy who can spread it to different regions. I have them in Arabia Peninsula also.
Click to expand...

Yes, the spread events are largely based on historical travels the founder of Sikhism made. He didn't have much success beyond Punjab, but in another life...

hauptman said:
Your going to need to open this in a new window, to read the dialog box...
Click to expand...

When posting such things, it helps to use:

replacing { with [ of course. brifbates said:
Didn't screen shot it but I just saw Castille refuse the Iberian wedding event. I didn't even know the ai was allowed to...
Click to expand...

They can, but it's *very* unlikely. In my current game as Granada, they refused it. I was pretty happy about it.
Toggle signature
For every complex problem there is an answer that is clear, simple, and wrong.

I reckon it's about time I showed off. Mind you - not Ironman. I'm not that good. Still a pretty good achievement I think .

I played as Crete (released as a vassal by Venice)

The goals I set for myself were:
1. Win my independence. Austria & Aragon vs Venice war helped a lot here. Aragonese fleet held back Venetian navy long enough to let me get to Naxos and siege it pushing me over the limit for claiming my independence.
2. Not form Greece or Byzantine Empire. I wanted to do this as the underdog, meaning Crete.
3. Reconquer all lands once claimed by Alexander the Great of Macedon and return them to Greek (Cretean) rule. I got all his lands including all of Greece, Turkish and Persian Regions and his African holdings.
4. If possible, surpass Alexander's conquests. To do that I conquered Rome and much of Italia, most of north Africa and Arabian Peninsula, all of Southern Slavic lands. I also took all of Mediterranean islands and advanced farther into India.
5. Create a Christian "path" between Europe and India. (Conquests of major religious sites like Mecca, Rome and Aleppo helped a lot to achieve that)
6. Restore the Pentarchy (done ).

Fun stuff to point out:
- Granada exists and owns Murcia.
- Burgundy noms France.
- Moroccan Algiers.
- Mali exists despite being a long-standing defender of Sunni faith and being called to shitload of wars.
- Scandinavia formed.
- Ming is alive and well.
- Portugal didn't beat Russia to Kamchatka.
- 100 years long deadlock between France, Russia and Ottomans each of whom claimed the defender of their faith and made it literally impossible to wage any major wars for a century. (almost made me ragequit)

Here are some screenshots: Whew. Was a bit of work that one. Gotta rest before AoW releases. Dat Theodoros is next on the list :3.

That text is actually Ottoman specific and was suggested by @Chamboozer .
We have a bunch of different texts depending on who circumnavigates the globe first. Some are region specific and some are tag specific
Toggle signature
No fighting in here! This is the war room! 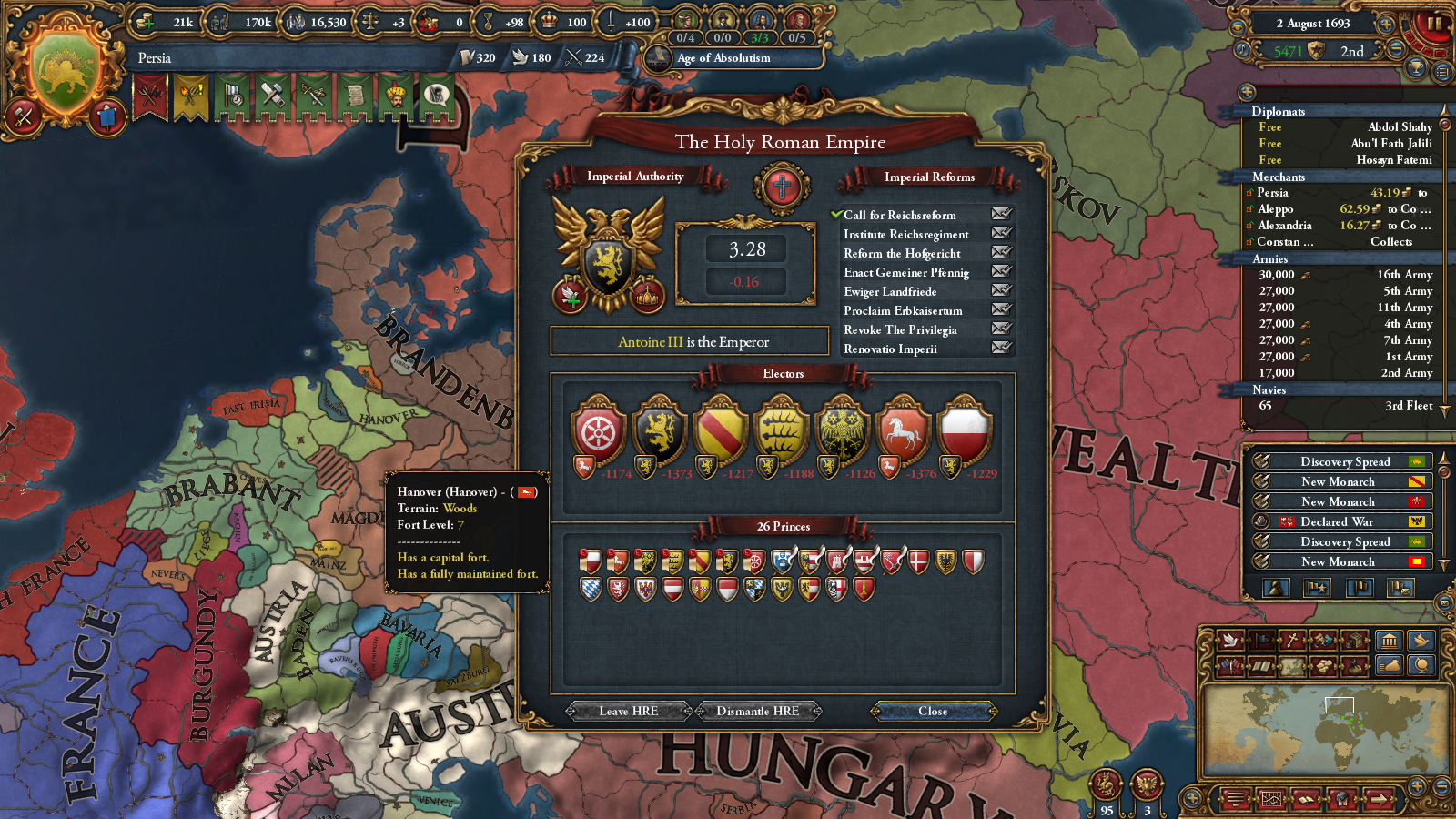 The Reformation really took off in mainland Europe.

Bouchart said:
Meanwhile, Scotland is ruled by King rebel_preacher I rebel_preacher, who has a son named Robert.
View attachment 315508

Apparently the game thinks that rebel_preacher is its own dynasty,

This is due to an event that creates pretender rebels with a leader called "rebel_preacher". They must have enforced their demands. The problem is this part of CultureandReligionEvents.txt:

LeSingeAffame said:
May seem stupid, but why use signed numbers for things like troops ? It's not like if we're supposed to go in the negative
Click to expand...

I don't recommend ever using unsigned except in bit manipulation code or where you otherwise explicitly need unsigned semantics. Aside from that, the fixed point arithmetic in Clausewitz is 32/64 bit signed only for above reasons. Many programming languages also lack support for unsigned because the designers know it's a noob trap.
Last edited: Mar 9, 2018

That's more questionable, I believe someone thought it appropriate.

Edit: Pretty sure it's because of manpower being represented with fixed point such that 1 manpower = 1000 men, and the data type remaining after multiplication. Still, converting this to an integer before summing would solve the issue unless you have wars above 2 billion losses.
Last edited: Mar 9, 2018
Show hidden low quality content
You must log in or register to reply here.
Share:
Facebook Twitter Reddit Tumblr WhatsApp Share Link
Top Bottom