I have a bad habit of starting AARs and then abandoning them, but with not much else to do and a heavy curiosity in the game I hope I won't do that this time. If done, this will be my first completed AAR and while I don't have much experience in actually doing them I would like to consider myself an average writer. However, I'm very poor when it comes to writing dialogue and characters so this AAR will be written much more like a record on the civilization than a story following specific characters.

All of the DLCs are being used while playing this game and I have several mods enabled, including:
I consider myself a rather poor player and will be playing on scaling difficulty with captain and a medium spiral with four arms. The other settings are as follow:
The civilization I will be using, while I will go into more detail in my introductory post, is a custom I made. They're called the Vurl-Rein Repubik and derive part of their name from the Anthropoid 2 name-set where all planets have the second part of their name preceded by "Vurl-". I tried to replicate the idea of an alien language in their name hence "Repubik" being used instead of "Republic" which is what it would be translated to. Similarly, their home planet, "Vurl-Rein", means "Planet Ring" and the system it inhabits, "Sosto-Rein", means "System Ring". The ring part is derived from their origin being a shattered ring. The species are called Kalo (plural: Kalos; adjective: Kali) and below is the in-game description I made for them:

The Kalo, an insectoid race hailing from a ruined ring world, originated from another planet that they had long forgotten. Sometime ago, for as long as they could remember, they moved to the ring world via pre-FTL sleeper ships. Any search for their original homeworld goes unsuccessful. They dubbed their new home Vurl-Rein, translating roughly to "Planet Ring", and from that the name of their civilization is derived from translating to "Planet Ring Republic". Similarly the name of the system, Sosto-Rein, translates to "System Ring". They're an exploratory people though their larger fascination lies in trade and the exchange of not only goods, but also ideas.
Click to expand...

They have traits to replicate their mercantile mindset, those being:
Their government is, according to the game, a military junta though it's something far different in my head. This comes from its values as a egalitarian xenophilic militarist with the following ethics:
The two civics it uses, like the species traits, are meant to reflect their mercantile mindset:
Through this they have the oligarchic government type forcing an election every twenty years and providing a -20% edict cost bonus. The leaders are called "Dux" which I have shamelessly ripped off from the defunct Venetian republic and the starting leader is a male named Obr-Keq, a name randomly generated from the Anthropoid 2 name-set. The appearance of both the cities and ships are humanoid since I think those look much better than the other options. 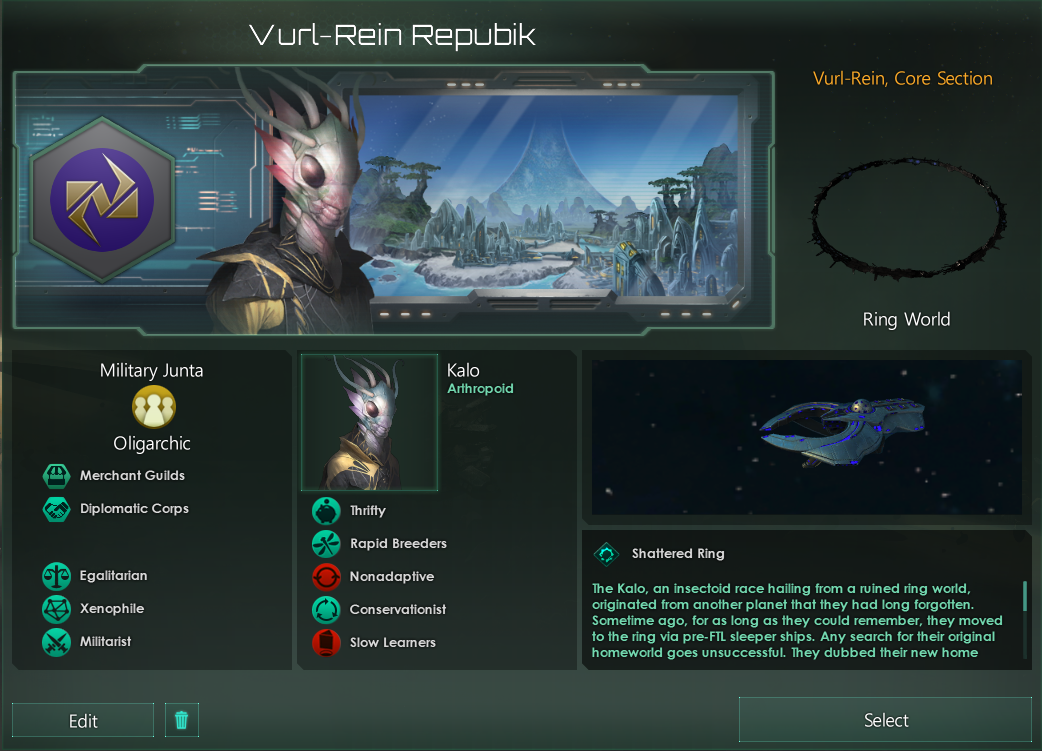 At the time I have finished this post it's 5:14 in the morning so any work I will do on the introductory chapter, going over the pre-FTL history of the species and a deeper look into their society and government, will be done tomorrow or, more accurately, today but later.

Should be interesting and engaging. Do not feel bad about starting AARs and eventually abandoning them. Happens to the best of us!