No real competition in Germany now.
Expand signature
To view is human, to comment is divine.
"Be not afraid" - John Paul II
"The Christian way has not been tried and found wanting, it has been found to be hard and left untried" - GK Chesterton.
Current AAR: The Thorn of the Rose HoI4 The Future of the Red Lion Stellaris (on hold) Journal of the Silver Daggers Battletech
Completed AAR: In Memory of France EU2 Pax Humanitas Stellaris 1.4.1 A VictoriAARn Education Victoria II 3.2
The Great Trial Stellaris 1.9.1A Game for Lisan: Belgium EU4 1.25 Account of RCAF Bomber Command HoI4
Other AAR: Entering the First Court - Kanem Bornu EU4 1.22
View my full AAR list at The Inkwell Red Special Cookie ●
This line is necessary since the forum re-work to enable the links in the last line to be used.

Denmark is now a protestant state. This reformation is getting more and more territories as we speak. This will be interesting to see those christians battle each-others... 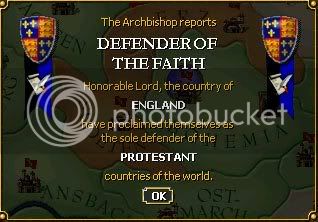 England is now protecting every protestant nation in Europe. This makes us laugh because they can't even protect their homeland and now the want a crusade against christianity? The only country able to release Europe from christianity is us, The Hussites!

Switzerland has fallen again to those austrian dregs. We won't accept this because we garanteed freedom to the swiss and we won't let go of our promise!

Austria has gone far enough... again ... and must be stopped!

Time for 'raep' time with Austria?

We declared war to Austria and will make them pay for their treachery! Our armies are stronger, faster and benefit from a large faith morale boost. With our over 100,000 men strong army, we will take their german lands and leave them their poor, useless hungarian lands.

Strangely, they remind us of the old Hungarian army we battled years ago. They are weakened by their faith and innefective against our invicibles regiments.

At first, they get the upper hand on our milanese brothers and annex their land. This makes us more offended by their acts and our morale could'nt be higher.

Our armies, combined with the 20,000 strong men sent from Pommern attack Austria from all sides.

Soon after, Wurtemberg, the dreg's followers, join the austrian ranks and charge our forces. They are stronger than exepected and they give us a hard time in the east.

While the skirmishes continues in the east, Our western strike-forces are making short work of those austrian peasants!

While the fighting continues, our priests informs us that Tirol is now following the Hussite faith. This new faith gave them new meanings to fight and they are now ready to join us!

Hannover, one of our vassals, has now converted to the protestant faith. They are much closer to becoming of the true reformed faith, the Hussites!

After many skirmishes with Wurtemberg, they offer us peace with little compensation. We accept, as our problem lies with Austria and not them. They will be dealt with sooner or later anyway.

Austrian forces are annihilated and we won a decisive victory once again. We want from them their german possessions and Magyar, wich will give us a strategic position within hungarian lands. To have no choice but to accept! Victory is ours, my brothers!

What about taking Istria soon?

Enewald said:
What about taking Istria soon?
Click to expand...

Good AAR. Some real luck with the conversions must really be helping you in putting together this grand Hussite Empire. Good work against Austria - too bad it looks as if they have managed to retake Switzerland and Milan... Alas, all that white land will likely be brown before long... Subscribed.

Please also post another screenshot of all of Europe. I'm quite interested in the weirdness in Anatolia and Iberia.

Nikolai said:
Impressive how well you have positioned Bohemia. Go Hussites! Only one nitpick: Hussites and Protestants are Christians too, you know.
Click to expand...

I know But they want to be a new form of faith and hates those conservative catholics sorry!

BTW, sorry for no recent updates, gotta work and christmas is near so I gotta work twice as much.

I will try to update this AAR in the holidays!

Great AAR. One of the things that drove me nuts in AGCEEP was the inability to convert anyone (even your own provinces T_T) to the One True Hussite Faith! Also, losing German culture was pretty rough...

The Czechs looks really aggressive. Great empire here btw
Expand signature
"Ain't misbehaving, ain't bothering anybody, just reparating my primus," said the cat with an unfriendly scowl, "and I also consider it my duty to warn you that the cat is an ancient and inviolable animal."
Mikhail Bulgakov, The Master and Margarita

Sorry but this AAR will be closed for the time being....

I don't have time for gaming with my day-job , so I got much less for writing an AAR...