Hello all and welcome to a brand new AAR by yours truly. I will be doing this AAR alongside my other one, so I apologize if updates are slight sporadic, but I will try my absolute best to regularly update this.
i will be playing France in 1936, where anything is possible.
I hope you all enjoy, thank you for coming along for the ride!
I'll be playing on Regular and without Historical AI Focuses, for a more randomized game
Last edited: Jun 8, 2016
Expand signature
AARs I'm writing
The French Chronicles - A HOI IV Narrative AAR.
Sounds of Eternity - A dual-historical AAR with the lovely Janha!

The year was 1936. Tensions had risen and the entire world held its breath as no one was quite sure to as what would happen in the next couple of years.

The previous year began fairly happy - no wars declared, no wars won. The French and Italian governments had agreed on not disputing eachothers colonial claims, and with that became peace in the African region, atleast between two of the great powers that controlled it.

With the next month came more good news - a antibiotic had been developed. With it, millions of lives could be saved from the ravage that diseases caused. All of those deaths - cured - with one little chemical, it seemed almost too good to be true. Is the world getting closer to peace?

Adolf Hitler. Leader of the Third Reich, Fuhrer of Germany removes this thought from the world's mind by ordering the reinstatement of the Luftwaffe - the Air Force - in direct violation of The Treaty of Versailles, a treaty made in order to keep the peace in Europe, and to make sure chaos didn’t erupt like it had almost two decades ago. The major powers, worried but not wanting to cause a ruckus, decided to leave Germany, although a violation had occurred. This was the first of a long line of events leading to global chaos.

March came and for a while, all seemed to be going well, although the Luftwaffe had been reinstated and military aircraft was almost definitely being manufactured in Germany - no one expected yet another violation of the treaty. Adolf Hitler announced German Re-armament, officially stating that naval and ground vehicles were being manufactured for military purposes. This caused a stir in the publics of the allies, causing them to question as to why their governments weren’t doing anything to stop this.

April came and went with little disruption, no major events sprouted up to cause a ruckus. People sighed a sigh of relief, hoping for a better tomorrow.

May struck without warning - news came that Hitler had reintroduced conscription to the army - yet another violation of the treaty. People were terrified, first the luftwaffe, then the navy and now a mobilized army? Germany was getting ready for war, but no one quite knew when they would strike or exactly who against.

June came as a surprise to those of the public, a deal was made between England and Germany, known as the Anglo-German Naval Agreement, a deal that stated Germany was allowed to retain a navy 35% the size of the British, the current world naval superpower. People were disgusted. The government saw this as a way of easing tensions between Germany and those who wanted the treaty enforced.

July to September were times of peace, no real conflict nor disagreement occurred, tensions seemed to settle, atleast for a while. For those three months, people seemed hopeful.

October came and a war was declared, Italy wanted the Ethiopian Empire to be brought to its knees. Italy invaded Ethiopia. This war showed the true extent of the Leauge of Nations, that it was nothing but a threat. They weren't able to control Italy nor able to protect Ethiopia.

People waited in anticipation for something to blow up in November, but it never came. The people gave up looking hopeful, they knew something was coming, and they knew it was soon. They weren’t prepared. They were scared.

December. Henrich Himmler, one of Hitlers right hand men, started a program known as Lebensborn, or fount of life, as a way to bring to light a race that is superior to them all - dubbed the Aryan race, these people were blond with blue eyes and a physique built for war. Hitlers’ propaganda showed that this race was the key to life and told the populace that Aryan children is what they want. It promoted adoption of them from other countries, and sex with anonymous women in order to produce them.

The world is at a standstill. The people are frightened. The world's population is expected a cataclysmic event. No one knows what will strike.
Expand signature
AARs I'm writing
The French Chronicles - A HOI IV Narrative AAR.
Sounds of Eternity - A dual-historical AAR with the lovely Janha!

Chapter 1 - Documents of the Army 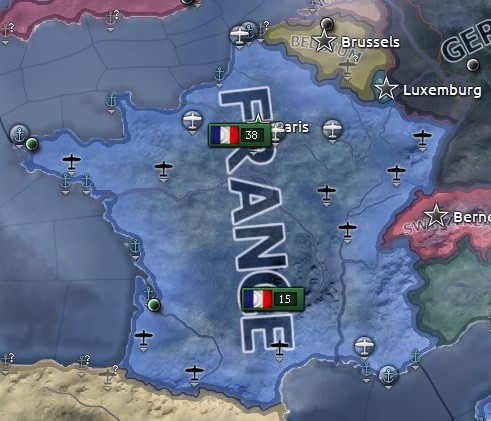 The great country of France, it is here our story begins.
Situated in the heart of Europe lies the city of lights, the heart of Europe and the forefront of any provocations the German Reich unleashes. Their army, although trained in the art of warfare, is mediocre compared to its neighbours. Still recovering after the effects of world war one, but due to a large economy built on trade, they were coming back up to their once dominance in the world.


Three armies were made to combat the threat of the Germans, lead by Frances greatest military leaders.

Armee de General, France's main army, made up of the best infantry and vehicles the country has to offer. Lead by General Alphonse Juin and France’s main defense against any invaders planning to hurt France’s legacy. General Alphonse rose the ranks quickly and quietly in the midst of world war one, he was stationed in Morocco before it broke out, and when it did, he was sent to lead a division on the western front, it was here he was gravely wounded and loss the use of this right arm. This didn’t stop him wanting to fight for his country, it only made his hatred for the Germans greater.
After the first world war had ended, he went to Ecole speciale de Saint-Cyr, France's greatest and oldest military academy. It has here he was retaught modern warfare and trained, and promoted to General after showing ingenious tactical knowledge and great leadership skills. With General Alphonse in charge, morale was at an all time high, his men listened to his every word and they knew Alphonse would lead them to victory. Armee de Gaulle, France’s military juggernauts - made up of elite infantry and most advanced tanks, used to push into enemy lines and make way for Army de General to spread and conquer. Lead by General Charles de Gaulle, this was France’s most elite division used.
When war broke out in France in early August of 1914, the regiment he belonged to was considered one of the best and immediately sent to the front lines to combat the advancing Germans, however his General, loyal to the tactics of the 19th century sent units sprawling into combat in pointless bayonet charges, resulting in heavy casualties.
Promoted to Platoon Captain, Gaulle was involved in fierce fighing from the beginning, and was amongst the first to be injured. During treatment he grew resentful of his Generals old ways.
Yet, with General Joseph Joffre's decision to stop the retreat and counter-attack, favoured by the arrival of British units and by changes in the command structure, the rapid German advance was eventually stalled by mid September at the First Battle of the Marne. Returning in the Marne in late 1914 to find many of his former comrades dead, he was put in charge of a company. De Gaulle's unit gained recognition for repeatedly crawling out into No man's land to listen to the conversations of the enemy in their trenches, and the information he brought back was so valuable that in January 1915 he received a citation for his bravery. On 10 January, de Gaulle received a bullet in the left hand which incapacitated him for four months and which later forced him to wear his wedding ring on the right hand.

Lastly, Armee de Weygand, France’s back up army, situated on the border between them and Switzerland, located in the snowy mountain of the alps, these troops were conditioned to withstand the harshest of temperatures and fight in any terrain. They were mainly used as reserves and, if all goes well, rarely used in day to day combat. Weygand passed World War I as a staff officer. At the outbreak, he satisfied his taste for contact with the troops by spending 26 days with the Fifth Hussar Regiment. On 28 August, he joined the staff of General Ferdinand Foch, under whom he was to serve for much of the rest of the war.

Sorry for the short chapter guys! It got late and I forgot to update it so I made this as quickly as I could, tomorrow I'll a bigger, much more juicy update, stay tuned
Expand signature
AARs I'm writing
The French Chronicles - A HOI IV Narrative AAR.
Sounds of Eternity - A dual-historical AAR with the lovely Janha!

I'm saying this now, but I might be wrong. Develop Madagascar, it's the only holding you'll be left with if it all turns to sh*t. Indochina will be claimed by Japan, France and most of Africa will go to Germany, and French Guyana is in danger from possible Fascist South American nations. The Pacific isles will be taken by Japan as well, US navy is trash if Japan plays its cards right. Oh, the US can also demand a bunch of isles in one of its focuses, and I'm pretty sure some are from France and not all from Britain. Just a warning.
Expand signature
Death is but a release from the mortal plane.
Life is but a start,
Ending with Death,
What is important is not the destination,
But the Journey.

A man is valued by his actions,
But what of the perspective of those actions?
Would the ruthless extinction of a million lives be considered just for the survival of a billion?
Would the usurpation of a weak ruler be justified in order to save the realm?
Would an authoritarian ruler be justified for murder in order to build a strong nation?
Those answers depend on whom you ask, but also on those that ask.
G