The Darkest hour of the Russian Empire 2

THE DARKEST HOUR OF THE RUSSIAN EMPIRE 2​
by Falconette​

So, finally, here it is. Welcome all my readers and everyone who liked my previous AAR about Russia in WW1-era. First AAR's timeframe was from 1914 till 1918. This AAR would be divided into two volumes - The Interbellum (from 1918) and The War (from 1936). Doing some modding, I continued playing as Russian Empire after the victory in WW1. So, let's start!​
Game version: Darkest Hour 1.02b2
Scenario: The Great War, 1914 -> The Day of Decision, 1933
Difficulty: Hard
IC takeover: ON
Tech teams takeover: ON
Used cheats: nofog and sometimes money

Nice to se a continuation, but now, let's raise the stakes.

I want to see Russia(under the glorious reign of Anastasia I) go for world hegemony
Toggle signature
HoI2Geek/IEPH, The Greatest Man in the Universe​
My Mods and AARs (currently active): IG(Mod), PNW II(Mod), RotE - tRB(AAR)​
Also find him on: AlternateHistory.com, SimCity Journal Union, and Deviantart​
"Those who cannot remember the past are condemned to repeat it" -George Santayana​
"Ang hindi marunong lumingon sa pinanggalingan ay hindi makararating sa paroroonan."(One who does not learn to look back to where he came from, will never get to where he is going.) -Filipino proverb​

The Darkest hour of the Russian Empire 2​
​

Chapter Zero: Introduction
Part I: After the Great War​

Founders of the new Europe

...The Great War was won by the Entente. Central Powers were totally crushed and had no chances to bring back their previous might and glory. Germany lost all her colonies, Lorraine (to France), Schleswig (to Denmark), Western Poland and Danzig (to Russia), Sudetenland (to Czechoslovakia). German Empire was no more, only weak German republic, that was completely abased by Versailles treaty - without the army, the navy and any national proud. Austro-Hungarian Empire collapsed and was separated into Austria, Hungary and Czechslovakia. Large parts of former Habsburg territories were given to Yugoslavia (Croatia and Bosnia), Italy (Dalmatia and Northern Italy), Russia (Galizia and Krakow). Ottoman Empire lost Southern Caucasus to Russia and all Middle-Eastern territories to France and Britain in 1917. In 1918 under hard diplomatic pressure (Black Sea fleet entered the Sea of Marmara and was ready to shoot at Sultan's palace) Istanbul was given to Russia and renamed into Constantinople. The Great War finished, but didn't solve all the problems of Europe. It only added more of them...

Russia after the Great War

Nicholas II at the age of 55​
Russia won the war, but payed extremely high price for that - losing 2,500,000 soldiers killed and wounded was terrible even for such a big nation. Russian navy lost 70% of its strength in bloody naval battles like the Battle of Danzig bay or a disastrous battle versus the Austrians in Black Sea. Nicholas II realized that the country never was so close to death. Emperor knew that the triumph of his empire was based on millions of dead soldiers. Revolutionary threat didn't disappear - autocratic regime was still too unpopular. There was a lot of work to do. Geo-political situation leaved much to be desired - relations with former allies (France and England) worsened after the Treaty of Constantinople - this unexpected step of the Russian government that gave the Tsar an opportunity to enter the Mediterranean Sea shocked Entente's governments. Germany was very dangerous too -trying to make her peaceful forever, authors of the Versailles treaty destroyed German national proud, and revanchists started becoming more and more popular. Russian foreign minister Sazonov was one of the treaty authors, and his idea about tiny 100,000 Reichswehr was a dangerous decision. So, with so much problems, the Tsar had no another way. On 1 of May in the Winter Palace in St. Petersburg (in 1918 he became St. Petersburg once again) the Constitution of the Russian Empire was announced. The Tsar became a constitutional monarch with about 50% of political power, while other 50% were in Parliament's hands. It wasn't a crowned republic like United Kingdom, but not Autocratic Russia of Alexander III. The new era had begun.... 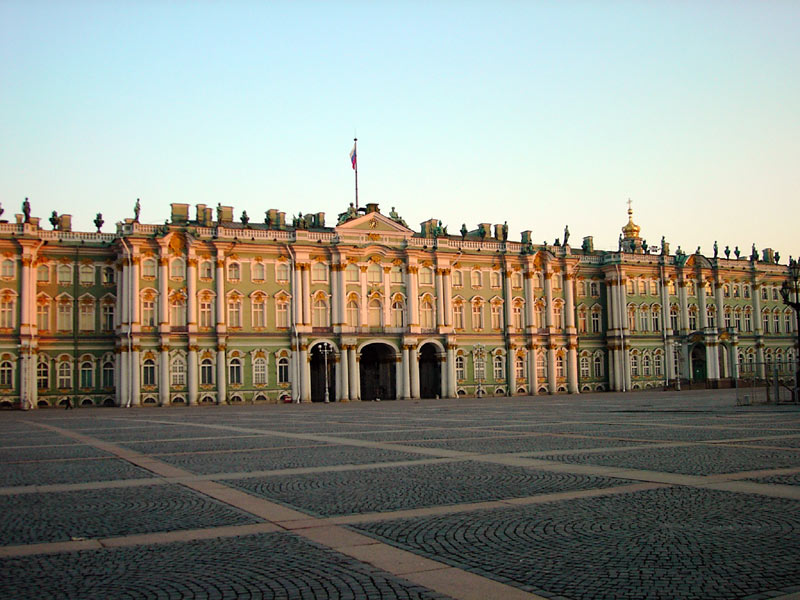 Winter Palace - a place where the Constitution was born​
This unexpected act of the Imperial Government suddenly changed the political situation. Ultra-revolutionary parties like Bolsheviks lost influence in Russian society, because all attention came to more conservative Mensheviks, Social-Democrats and SRs, who had an opportunity to have a place in Imperial Senate and State Duma. First free elections of Duma since 1914 began, and the results were quite interesting. They didn't change the cabinet much, because all ministers according to the Constitution were appointed directly by the Emperor (except the Prime Minister, who was a leader of majority party), while Parliament's duty was to create laws and vote for it. This regime suited Russia well, because it legalized all banned parties except Bolsheviks and made the elections free, while the Tsar had enough power to rule.


IMPERIAL ELECTIONS OF 1918​
Political parties of the Russian Empire at 1918 elections:

Results of the elections:


State Duma​
State Duma (Lower House) was responsible for creating, discussing and accepting Imperial laws. It was elected by all the population, and the winning party appointed their leader as Prime minister. In 1918 right conservative and reactionary parties were the strongest ones, because they gained popularity after the war successes and were considered to be right guys to restore the country economy and infrastructure after the war. So, Octobrist party together with Ivan Goremykin as prime ministerial candidate had the biggest chances to win. Imperial State Duma consisted of 600 seats with 301 seat needed for majority.

Results of the elections:

hoi2geek said:
Nice to se a continuation, but now, let's raise the stakes.

I want to see Russia(under the glorious reign of Anastasia I) go for world hegemony
Click to expand...

Thanks for the first comment Well, that's similar to my plans, but by Russian Imperial Laws a woman can attend to the throne only when no male princes and grand dukes are alive. I'll let crown prince Alexis survive his illness in this version of history, so after the death of Nickie he would be Tsar Alexis II
Toggle signature
Contributor of KR and DH teams :laugh:
Also somewhat developer of Turning Point ​

I wish you all the best of luck in part 2 of your campaign as the Russian Empire. You have made a very nice setup and I look forward to seeing more.

Brilliant update, it was probably really an hard for Nicholas to even consider making an constitution.
What are your plans? Join the Axis, the Allies or make your own side?
Toggle signature
The Eternal State - a DH-KR Ottoman AAR - Dropped due to health reasons

Soulstrider said:
Brilliant update, it was probably really an hard for Nicholas to even consider making an constitution.
What are your plans? Join the Axis, the Allies or make your own side?
Click to expand...

I'll ask my readers about that when 1936 arrives
Toggle signature
Contributor of KR and DH teams :laugh:
Also somewhat developer of Turning Point ​

Make your own side, and go against all nations (even neutrals), so that the world is one Russian planet.
Toggle signature
HoI2Geek/IEPH, The Greatest Man in the Universe​
My Mods and AARs (currently active): IG(Mod), PNW II(Mod), RotE - tRB(AAR)​
Also find him on: AlternateHistory.com, SimCity Journal Union, and Deviantart​
"Those who cannot remember the past are condemned to repeat it" -George Santayana​
"Ang hindi marunong lumingon sa pinanggalingan ay hindi makararating sa paroroonan."(One who does not learn to look back to where he came from, will never get to where he is going.) -Filipino proverb​

The Russian Empire survived World War I. I think you broke history Falconette...or did you save it? In any case, I'm very interested to see the future of the Empire
Toggle signature
Political Test
Ideology: Social Democrat

With this new system, I think that in the 1920s Russia will boom like the USA and if you insist on a Depression, either Russia will stay with democracy or autocracy again...if democracy is strong enough it will hopefully not elect parties like fascists/communists take over (because of large votes...). Above all the Tsar will remain now that he has done so much good to Russia.

Interesting developments...will a clash with the japanese happen again? What will Russia's policy with Germany/Entente be Can't wait for the updates!

This will be most intriguing.
Toggle signature
God GM in A Clash of Kings: A Song of Ice and Fire.

Your last aar was excellent. I look forward to a repeat this time.
Toggle signature
"If you love wealth greater than liberty, the tranquility of servitude greater than the animating contest for freedom, go home from us in peace. We seek not your counsel, nor your arms. Crouch down and lick the hand that feeds you; may your chains set lightly upon you, and may posterity forget that you were our countrymen."

To be honest, I want you to force the SRN into power and form a fascist dictatorship. Alternatively, get KMs in charge and go full autocracy.

Very interesting! Loved the last thread.
Hmmm, I would think the Black Hundreds would make a better PA party. For NS.... err... The Ushi Party? (Damn you Empire Earth!)
Also, Russia is definitely strong enough on its own to play the Axis and Allies against one another for its own gain. Another victorious march into Berlin? Maybe even another glorious march into Paris? ;D
Afterwards, conquer the world and become Tsar of the Earth Empire! Just watch out for those meddling LFW this time.

It will be very interesting to see how the world post the Weltkrieg will proceed. Nazis or Communists in Berlin? France taking on the popular front? Spain descending into chaos? Whatever happens, I hope holy Russia holds true to her new constitution.

Hurray for Octobrist victory! Let our new democracy save the old ways.

So glad to see you continuing this! I love the work you did outlining the election results; very good stuff!
Toggle signature
Let's Learn Victoria 2 with Professor von Bismarck -- Episodes Tuesday and Thursday
Like what you see? Check out my Inkwell for awards and completed AARs!