The Complete Guide to the Commune of France

Manasian said:
When I read your tutorial, I realized that you don’t use strategic redeployment, maybe to make things a little harder (even if it’s not always the case) but even in peace and/or on your own territory you don’t use it. Why?

It also seems to me that you forgot to say from when or must strengthen his troops to 100% (mi-38 I suppose ?) because I thought to strengthen them early 39 to attack mi-39 (as "historically" in fact) but I was surprised by the Shelling of Bretten event where the German DoW me (he had asked for reparations in addition to apologies and I refused) so that my troops were not 100% reinforced at that time (although it went well afterwards) On the other hand, German had a huge dissent, in the 30% (I took a look at the save to see it, even if I suspected it, since its non-national provinces like Malta had a 35% chance of rebellion) which made things easier.
Click to expand...

I just don't like that mechanic. I use it when I build garrisons for example since there is no alternative, but otherwise, I generally don't. (but the AI sure does)

I think I did make a comment about not reinforcing until fairly late in the game to save supply IC cost and then announced when I started to do so once I thought it likely I'd be fighting Germany in short order. Yes, just after the Bretten event I started reinforcement and posted the slider settings. I don't see much point in doing so before that while waiting too long can be risky (especially if those divisions are holding the forts along the border) though it is still winnable as you said. The only time I'd say you should reinforce immediately is if you want to fight an early war with Germany. Doing so in 1936 is especially fun since there is no time to increase the size of the mobile forces and it is thus harder to pull off large encirclements. That said, the French army is still big enough to stand its ground in 36.

Germany does not always get huge dissent. The right decisions can fix the problem, though a player can bring it down much faster of course.

Hopefully, the gearing bonus will shrink the time it will take to build them all.
I would like to have about 24 interceptor wings since Germany & Co have a lot of airpower.
Click to expand...

Isn't the gearing bonus already included in the given built-times of serials?

Are HQs in the Kaiserreich-Mod no good or is there any other reason that you have only 1? Not that you were really in need of them it seems...

Sorry, that I am a bit late and refering to rather old posts...
Good reading, btw.
Toggle signature
Darkest Hour: How to build a powerful Navy from nothing: Operational Example

Altruist said:
Isn't the gearing bonus already included in the given built-times of serials?

Are HQs in the Kaiserreich-Mod no good or is there any other reason that you have only 1? Not that you were really in need of them it seems...

Sorry, that I am a bit late and refering to rather old posts...
Good reading, btw.
Click to expand...

That being said, they also can't manage to keep up with the pace of the advance. I prefer to appoint generals in such a way that short of a large pocket and a battle involving massive armies for which I have the one HQ, there are field marshals, generals, and so on scattered across the front for maximum coverage.

As for the gearing bonus, I am not sure, though I do think I often see the build time of a serial run going down, but I could be wrong.

I am just going with my gut here, but I am almost certain a second (and a good chance a third would too) HQ would pay for itself from improved combat efficiency from improved ESE, tactics, &c. Your zig-zaged spearhead lets your slow HQs partially keep up by just going east as conditions allow.

Edit: Something like this would keep the vast majority of your boys at peak efficiency. 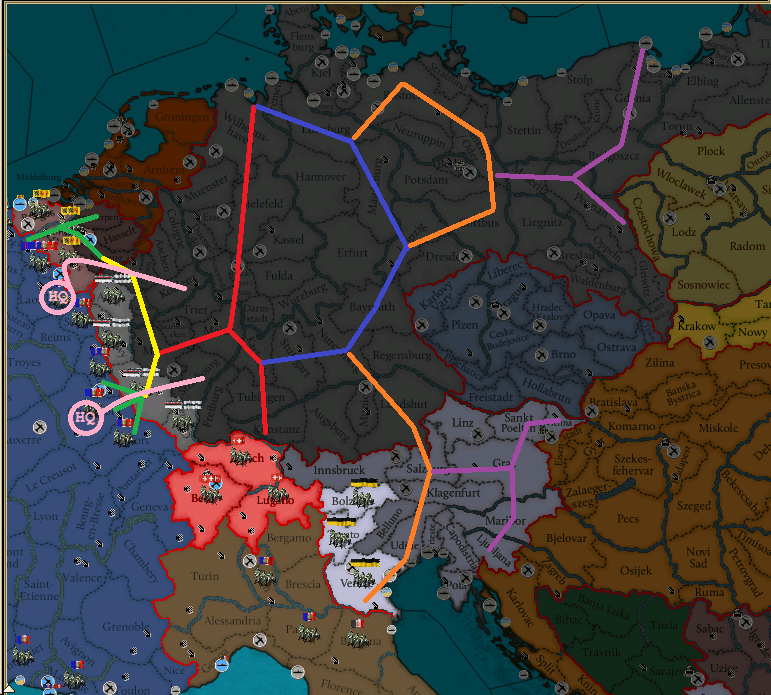 TomorrowsHerald said:
There isn't so much left to get into that isn't simply painting the world red. If there are any specifics you'd like to see I'd be happy to know, but otherwise, apart from taking out the Entente and possibly the Soviets, there isn't so much left to do in this save. As luck would have it, the cause of global revolution seems to be mostly attending to itself almost everywhere with the exception of South America & East Asia.
Click to expand...

South America... I'd really like to see, ah, liberated. Too seldomly done and could put to use some of the, so far, completly in vain produced navy.

PS: I really enjoyed your chapter and phrases about liberating Germany...

TomorrowsHerald said:
we love Germany so much that we'd like to have four of them!
Click to expand...

Old story... everybody loves Germany more if there are as many of them as possible.
If there is just one Germany, though,...
Toggle signature
Darkest Hour: How to build a powerful Navy from nothing: Operational Example

Altruist said:
South America... I'd really like to see, ah, liberated. Too seldomly done and could put to use some of the, so far, completly in vain produced navy.

PS: I really enjoyed your chapter and phrases about liberating Germany...
Click to expand...

True, my navy hasn't really done much. I expect to use it against Africa but it will need to beefed up for Atlantic operations for that to happen.

My gaming PC is currently under repair after an unfortunate accident so I haven't been able to play much recently. I did dig up my old PC for general purposes and funnily enough DH is one of the few games that can work on it without the thing overheating to an emergency shutdown. But I don't have that specific save on it.