"Nothing is more difficult, and therefore more precious, than to be able to decide."
Napoleon III, Emperor of the French (1852-1874) 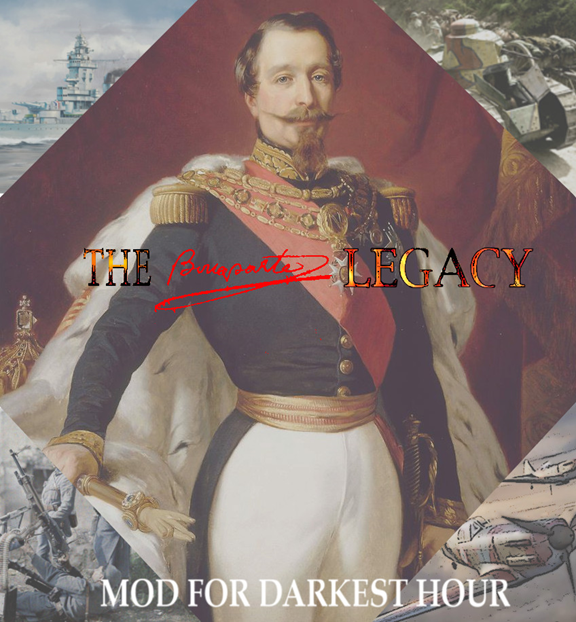 The Bonaparte Legacy is an alternate history mod for Darkest Hour originally created in 2011 by Zokan. In 2014, he personally stopped working on it and subsequently deleted his Paradox account. Since then, some have tried to continue the work on the mod -notably @Arcangelus who updated it to DH 1.04- but no major update have been delivered. In our opinion, this mod has a lot of potential and with the help of people interested in its development, can grow a lot bigger than it is right now.

After some talks with the community and members of the forum's staff, A new dev team was assembled to carry on with the development of the mod. However, the team is currently very small and we all have full-time real life priorities, so if anyone interested in TBL wish to join us, any form of help will be welcomed.

Please that note that all the credits for the mod goes to @unmerged(30953) -Zokan- who created it and originally thought about it.


Special thanks to:
Saferli for the help with the ownership and stuff
Gukpa who first proposed us the idea of continuing the work on TBL
the community who showed their support
and, again, to Zokan for creating such a good mod!


Current status:
The mod is in its 0.6.2 version (As of November 2020) and is compatible with the lastest version of Darkest Hour.

Report bugs on this thread

Installation instructions:
Download and unpack the mod file into your mod directory in the Darkest Hour file. With Steam, right-click on Darkest Hour in your game list and click on "properties" then select the "local files" tab.


About the mod:
The point of divergence between our history and The Bonaparte Legacy's timeline occurs in 1861. In this timeline, the Trent Affair happens differently: the Confederate delegates send to Europe are travelling on board the french 28-guns steam frigate Hermione instead of the British mail packet. The French vessel is intercepted in the Bahamas Channel by the USS San Jacinto and his overzealous captain, Charles Wilkes. After Hermione's captain refusal to stop his ship, the American warship opens fire and a short battle follows in which the Hermione is severely damaged. Emperor Napoleon III is furious and France intervenes in the American Civil war on behalf of the Confederation. War is then avoided between France and Prussia in 1870, partly because of a change in French foreign policy which had led to an alliance with Austria and partly because of the excellent state of the French Army, which did not suffered from the budget cuts it had in our timeline. In the folowing decades, the Second French Empire rises to become the most powerful nation in continental Europe, taking the position Germany had in our timeline. Just like Germany however, the First World War is fatal to the French Empire and by 1936 a revanchist France is waiting for its chance to retake its former glory...

​
Anyone interested to participate can let it be known here, contact @Nesic8693 or @TheRemQc, or ask to join us directly on the TBL group under the tab group forums.

Come check us out!

Best of Luck with this mod. Zokan was a great modder and I'm sure you will be too.

I move on to 1914 scenario.
Toggle signature

InfoRapid Search & Replace is freeware and may be copied, distributed and used for private purposes without any limitations. Installing and using the freeware version on commercially used computers is absolutely prohibited. If the program is used commercially, you need a License (25 Euro) for every user. The latest program version and a powerful Cardfile System, which manages documents and pictures can be found on my homepage www.inforapid.com.

province 2760 is a sea province. Just change to the correct land province and it should be ok?
Toggle signature

Good to hear it. I liked the old mod. Great possiblities. Will watch.
Toggle signature
My mod: https://forum.paradoxplaza.com/forum/index.php?threads/end-of-union-ahd-hod-mod.1085140/

Wow nice ! Good luck (you can contact me if you want more information about the French Napoelonic era).

What are you planning on expanding?
Toggle signature
GENERATION 37: The first time you see this, copy it into your sig on any forum and add 1 to the generation. Social experiment.

Probably because of the Panama Canal event chain. Can you send me your savedebug? I'll be glad to help
Toggle signature
The Bonaparte Legacy: an alternate history mod for Darkest Hour

General Mosh said:
What are you planning on expanding?
Click to expand...

A lot of countries does not have a single event, this is the case for most of South America, Africa and Asia. My idea is to make these countries as much enjoyable to play as any major powers in Europe. Futhermore, there are no events after WW2, the story mostly ends with operation Kutuzov and after that it's empty. I want to extend the storyline into the 1950s and create specific events chains for the expansion of the Soviet Union (global revolutionn and stuff), the British Empire and France.

I don't see anything wrong... What you can do is delete the events ending the construction of the canal, it won't affect your gameplay and it should end the crashes:
go in The Bonaparte Legacy mod file
go in mods file
go in events file
go in north america file
replace the "ussa.txt" by this one:
http://www.mediafire.com/file/g32zdct8ct3vzct/ussa.txt
Toggle signature
The Bonaparte Legacy: an alternate history mod for Darkest Hour

Thanks ! You are my god ! *_* It works !
Toggle signature
Vive la France, Vive l'empereur !

well, a mod I enjoy has been resurrected, that is great, I will continue to watch this as it develops.
Toggle signature
"Can a nation be free if it oppresses other nations? It cannot" - Vladimir Lenin
Mods:
The Grand Campaign 1914-1991: https://forum.paradoxplaza.com/foru...rsion-of-the-grand-campaign-1914-1991.888180/
Mod1914 (continued development):https://forum.paradoxplaza.com/forum/index.php?threads/new-version-of-the-1914-mod.1149865/

Religion:Atheism...wait why should I put my religion if I don't have one.

Waiting for more for sure. Excelent mod was (and will be) it.
Toggle signature
[OLD PROJECT] Battle Cry of Old Empires

I couldn't do all of them, but here are a few

Come check us out!