Jump to latest Follow Reply
Menu
Install the app
You are using an out of date browser. It may not display this or other websites correctly.
You should upgrade or use an alternative browser.
Europa Universalis IV 78592 EUIV: Suggestions 17550 EUIV: Technical Support 6286 EUIV: FAQ & Strategy Guides 211 EUIV: AAR's, Let's Plays, and Fan Fiction EU IV: Alternate History Short Story Contest Contr 28
Show only dev responses

As we are are wrapping up the work for the year, this week's DD will be a rearview mirror glance at 2017, on what we have accomplished and the team behind EU4.
With that said, if you know yourself to be a ‘dev diary purist’ in the sense that you only want to read about what’s going in to the next expansion, then read no further.

This is not the DD you are looking for.

The year kicked off with an Asian focus, where Mandate of Heaven and its Ming patch saw the light of day early April. Closely followed by the Hungary patch, where we could enjoy some extra content in that area.
When I joined the team end of April, things were already moving along quickly for Third Rome - our first stab at creating a new kind of expansion. With the Immersion Pack, we wanted to provide something that focused more specifically on a certain area, while still offering some new and invigorating gameplay. And we wanted to see if we could do it faster than a regular expansion (which apparently, we could). It’s fair to say we got some mixed feedback, but most importantly some great input on what we could do better.

It was early summer when work started in earnest on this year’s big expansion, and now mid-November we could finally celebrate the release of Cradle of Civilization! Not only did it live up to our expectations of what a great expansion should offer the players, but it actually delivered hotjoin and cross-platform MP back to the people (after no little efforts from the team, it should be noted).
And as we gently pushed out the Japan patch last week, I do believe we’ve all earned a well deserved Christmas break.

Not uncommonly, the team has seen some changes through the year; we were joined by @Groogy (roughly at the same time as I took over from @Anona) and after the summer @mikesc joined the team as a programmer as well. There were also losses; @Gnivom & @Ihki have both moved on, and @Johan is now spreading his time and experience across all PDS titles (both present and future).

This means that @DDRJake is now officially shouldering the role as Game Director, and as an end-of-year bonus we managed to re-enlist @Chaingun for some extra AI love (which you can see first hand in previously mentioned Japan patch).

Of course we still have our other seasoned team mates that have continued to contribute with code (@r_lazer), content (@Trin Tragula), art (@TheRealTimor) and testing (@StarNaN & @Imse Vimse).
And our game wouldn’t be what it is without all the great help from supporting members of central teams and other dev teams - a special VIP mention goes to @Alexivan for his incredible work on multiplayer! 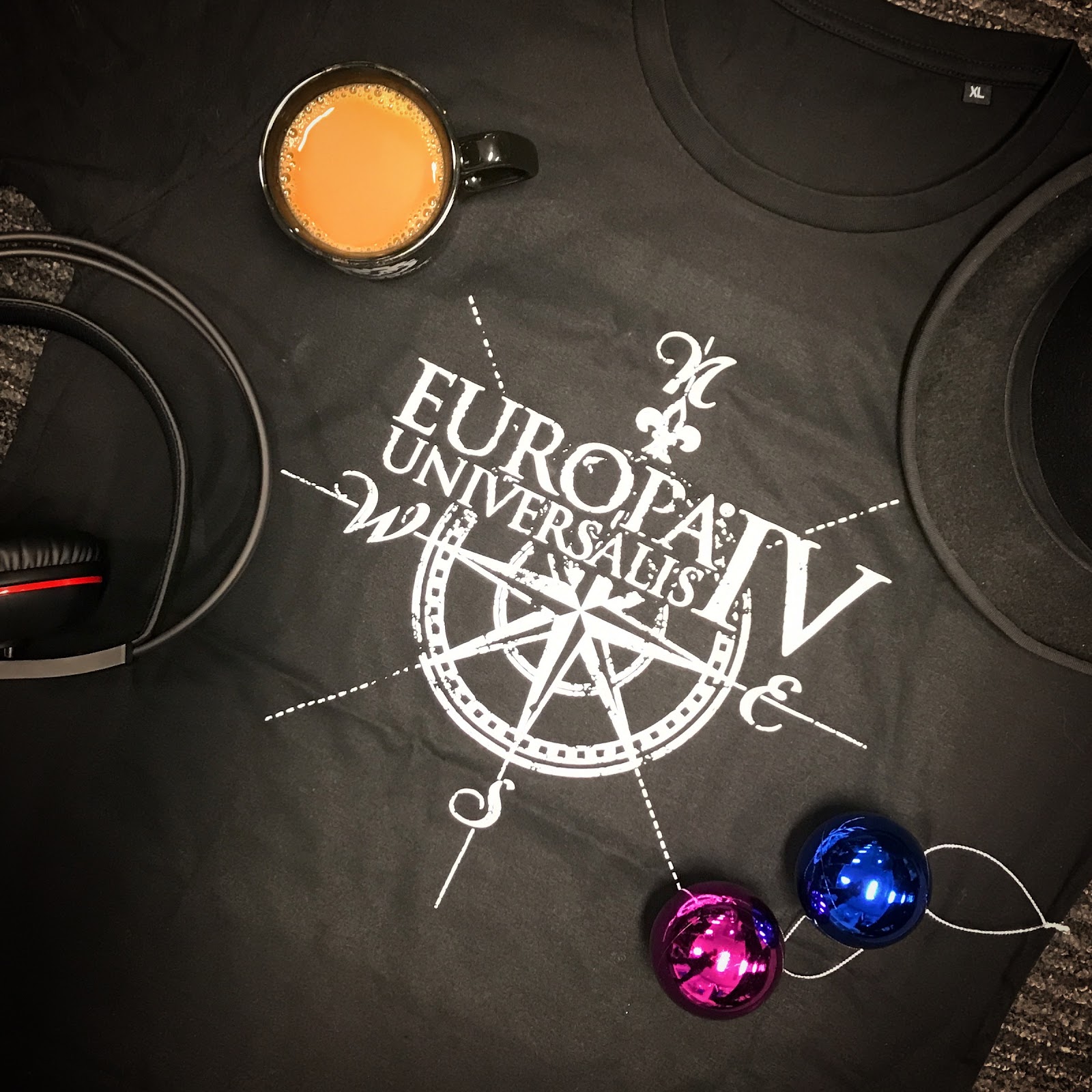 We do have some interesting changes to the team next year - we will get some sparkling new additions for both code and content, and someone ‘old but new’ will be stepping into the designer shoes.
And on the topic of changes and things to come - this so happens to be my last week with the team, as I am confidently handing over the torch to @millenss, who will carry on the project leadership for EU4 into the new year.

But depending on your dealings with other PDS titles, you may still see me lurking in the CK2 corridors in 2018…
So until then - have a fabulous and playful Christmas & New Year!
//Fogbound

Big thanks to Fogbound for the introduction and for allowing me the opportunity to work with such a fantastic team. I’m really excited for all the cool new stuff we will be bringing your way next year, but until then, have a great holiday everyone.

Thank you, it was interesting.

And congrats to Groogy, surprised he switched game design for programming...

On the other hand I'm really surprised with the frequency of people leaving the team. I think Gnivom replaced Chaingun just this year? You (Fogbound) also left the very same year as you joined the team...
Toggle signature
https://forum.paradoxplaza.com/forum/index.php?threads/division-commanders.1368762/

Merry christmas for all the Paradox crew. 2017 has been a great year for EU4, hope 2018 will be the same. It's sad that this time we didn't get a sneak peak of whats coming, but I guess it's understandable considering we had a patch last week. Keep the good work.

Wait so ddrjake (or Fogbound) is leaving the team?

Edit: I was reading as of ddrjake had written it*
Toggle signature
Atrocity is recognized as such by victim and predator alike, by all who learn about it at whatever remove. Atrocity has no excuses, no mitigating argument. Atrocity never balances or rectifies the past. Atrocity merely arms the future for more atrocity. It is self-perpetuating upon itself — a barbarous form of incest. Whoever commits atrocity also commits those future atrocities thus bred.

Moving people around can be good for their development, and to the team if they can bring in new knowledge, but not if it is done too frequently.

On game development, your new team members will take some time getting into a new game before they can be fully effective. That is the point at which you can expect them to be able to develop new ideas and improvements. You really need to keep them within the team for a couple of years before moving them on to a new team, and you need to keep some people with a deep knowledge of the game for longer.
Toggle signature
All posts made may contain grammatical and spelling errors, and are liable to editing to correct these. Personally, I blame it as a side effect of a stroke which left me with dysphasia, and not on old age.

Your Friendly Dictator Next Door

Future titles? Rome 2 confirmed!
Toggle signature
"History is form of cybersex!"
EvilSanta
"Please, call me Grubby"
- General Schenkhuizen, Timeslines: What if Spain failed to control the world?
There might be Vikings out there! Or: How I accidentally traded my wife for a halibut (pining for the Fjords since I lost my USB and the save game)

Fogbound said:
It was early summer when work started in earnest on this year’s big expansion, and now mid-November we could finally celebrate the release of Cradle of Civilization! Not only did it live up to our expectations of what a great expansion should offer the players, but it actually delivered hotjoin and cross-platform MP back to the people (after no little efforts from the team, it should be noted).
And as we gently pushed out the Japan patch last week, I do believe we’ve all earned a well deserved Christmas break.
Click to expand...

Whoever forced the rushed release of the broken AI changes in 1.23 (and 1.24 where AI no longer uses artillery to siege forts) does not deserve a vacation. Apart from that I quite like the additions which has been made to the game over the last year, and hope for more to come in 2018.

Thanks for all the hard work over the course of the year. Enjoy your holidays. All the best wishes for the new year and keep up the good work.

That would be SO cool!

can't wait to see the new vision for the 1.25 Byzantium patch now that ole jakey boy's got the keys

Mr. Grizzly said:
That would be SO cool!
Click to expand...

I sure hope vic 3 comes out soon,
although i hope it's gets more decelopment time to be release in a polished state,
cos i've been slightly disappointed with the hoi4 and stellaris release (stellaris 2.0 looks awesome).

Brynjar said:
Whoever forced the rushed release of the broken AI changes in 1.23 (and 1.24 where AI no longer uses artillery to siege forts) does not deserve a vacation. Apart from that I quite like the additions which has been made to the game over the last year, and hope for more to come in 2018.
Click to expand...

It's probably more an oversight of the QA team/person that didn't catch it.

thank you to all developers of all paradox, and the marketing team, congratulations for another year, you guys did a great job, I'm happy and have paradox games and be here in the community, have a good holiday at the end of the year and a great Christmas.
Toggle signature
Steam Profile https://steamcommunity.com/id/AnastielBR
​