Artfactial said:
Thanks.
I am running the editor at lowest as well. I am working on a slightly bigger than XL map, sure, but the file isn't at 7mb's yet.
I'm trying to find back the possible memory tweak that was posted with one of the latest patches but the old forums are offline again.

I have been searching for a possible memoryleak or anything, but no luck.
My MapEditor usage is at ~3,330mb RAM when first booted and around 3,520 mb's when the map file is loaded. Are those normal numbers?
I can understand that the software reaches 4Gb when saving the file, I suppose. But I'm not sure that would be the case for the actual game save.
I'm going to try and clean up any loose ends and unfinished additions, see if that smooths out the process.
Click to expand...

Its possible that the increased size of map cause some of the problem. One thing could be said for the level editor that it certainly helps to reduce the size of the physical window of level editor.

Ah, of course, the less to render, reduces memory usage, thanks!

And yeah...I'm beginning to fear the same. Was willing to try it since I had to start over with my map anyway...Seems like I'll have to do that again, in whatever capacity.
Starting to think that a full-scale Tamriel map isn't very feasible. Maybe with some careful planning like I have done this time around.

Edit: Ah, found out that both my mod packages edited the CityLogic.Rpk. This might have caused a crash when an independent town triggered a quest. Here's fingers crossed. Nevermind!..Just removed half a day of work.
Last edited: Nov 25, 2018
Toggle signature
Age of Wonders 3: Age of Tamriel mod project
Memory Issues

More tests.
In Game:
-I am able to play just fine; simultaneous goes slower with an occasional hiccup.
-Crashes occur on start of turn. Recorded on turn 3, 16 and 18.
-Manual saving has, in spite of saving at least every turn, not crashed the game. Bodes well for not exceeding memory usage.
-Crash at start turn could mean many things. A problem with a hero I haven't fleshed out yet that offers to join. A problem with an unfinished cosmic event that triggers.

In Editor:
Crashes still erratic. Sometimes it will not save, other times just fine.
-Rendering screen size has had no effect on saving so far. Which is to say, it hasn't saved when I lowered the size.
-I probably have to clean out some more dead end that were created with additions.
-Have been using Memory Reducing software to clean system after every crash: seams to work a little.
Toggle signature
Age of Wonders 3: Age of Tamriel mod project
Map Progress IV

I inevitably burned myself out on the project a while back and could not get myself to fight the software. I am learning to take things easy and am somehow able to work on the map again, so that is what I have started doing. No real plans at the moment, although I think I might just release the thing into Beta form when the map is playable and see what needs trimming and what needs extending in the gameplay/mechanids department. Don't expect things to go fast but I hope to have something playable by the time Planetfall arrives. 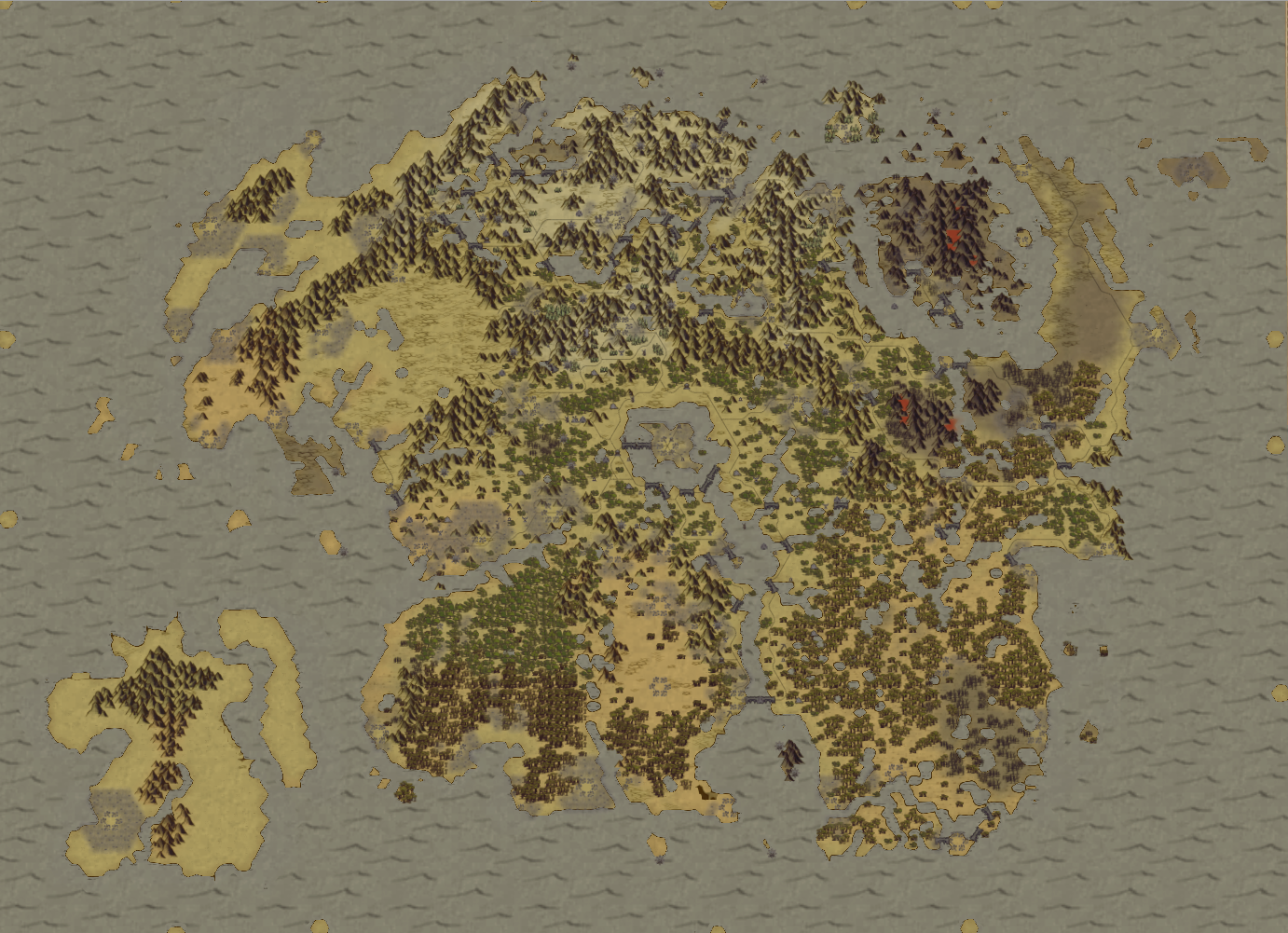 I didn't download the map, but I am curious about how you managed to not clutter it with cities. Did you use resource/treasure/visit sites and altars to make for lesser cities and PoI in TES' world? Were you able to give such sites non-generic names, say, "Shrine of Azura", "Suran", "Pelagiad", "Dagon Fell", "Assurnabibi", ... ?

Also, do you schedule to release all the elligible work under a RMG integration package (e.g. to have "Ashlander Camp", a variant to "Bandit Camp" with your units, on a random map)?

The map has not been downloadable as of yet. Only for a short time did I do closed beta testing with an earlier version. So nothing lost there.

The reason this map (most certainly compared to the previous one) is not cluttered is that is is larger than a standard XL map. I have only implemented the main cities for every province, being 7-9 pp, yet the travel time, and room for the addition of interesting, lore-friendly places, is still substantial. Lesser towns and cities thus far are implemented by having interesting buildings at their location (E.a. A farm at Applewatch, a lumber-mill at Kynesgrove, the Sleeping Giant Inn at Riverwood) so players can found a city at it, if they so choose.
All cities, forts, and many ruins/temples/shrines etc. have their accurate names. Even newly founded forts and outposts will have RNG lore-friendly names per race.

I am not sure about the RMG, it would be awesome, for sure. The way I have done it for the scenario maps is to, mostly, make the locations unique. Having multiple 'Bleak Falls Barrow's and 'Frostcrag Spire's spawn on a RMG would be weird.
As said, I am uncertain about the future plans beyond the standard map release right now. I'd love to have RMG integration at some point, if it doesn't create to many conflicts.
Toggle signature
Age of Wonders 3: Age of Tamriel mod project

If it helps durning your map production to reduce the amount of loading for the memory within the editor its possible to turn decorations off.

Then add them back inside the game by adding them with scripts. It may be time consuming to name every single decoration but may save some issues with editor.

I could give you a script and how to set it up if you are interested.
Toggle signature
The Wasteland Campaign - Age of Wonders III custom campaign
https://forum.paradoxplaza.com/forum/index.php?threads/wasteland-campaign-project-thread.1127076/

Oh wow, that would indeed help out tremendously, thank you!
The Editor is decently stable as far as I'm just adding/editing terrain and placing some structures.
The little decorative items I've placed so far have been noticeably hard on the editor's performance!

I haven't worked in LUA before but this seems like a good moment to get my feet wet.
Toggle signature
Age of Wonders 3: Age of Tamriel mod project

Just inactivate all decoration. Name the alias on each.

Create a timer set it to turn 1 in the scripts.

Awesome! Thank you so much! I'll try it out in the morning.
The added load of having to 'enable' a heap of decorations isn't an issue for the game?
Toggle signature
Age of Wonders 3: Age of Tamriel mod project

It works out quite well. For the wizard realm in scenario 2 of the Shadow campaign their is around 1500 scripts where 1200 is deactivated. Each turn it enable 300 different decorations to create a chaos climate effect.

I have not yet copied and paste all decorations scripts. But the map still runs well as I understand.
Toggle signature
The Wasteland Campaign - Age of Wonders III custom campaign
https://forum.paradoxplaza.com/forum/index.php?threads/wasteland-campaign-project-thread.1127076/

Haven't been able to try it out yet, sadly, since I managed to disable work in the map editor again..

Edit, In other news:
I have been able to make some big leaps in the core mechanics of the mod:
-the religion system is now pretty much in place and ready to be made use of.
-the cultures system and racial governance links are being put in place.
-these systems will interact greatly with the Cultural Preference system which has now been half-finished and implemented for testing purposes in the form of basic morale bonuses/penalties.

The human races have had most units mostly customized by now.
The Altmer units have been customized so now are using pretty moonstone and glass armors.

Daedra, and Daerdra Cults are now a thing, born out of necessity of basing the Religion system.

Alright, here's some quick shots of the Daedric units WIPs. 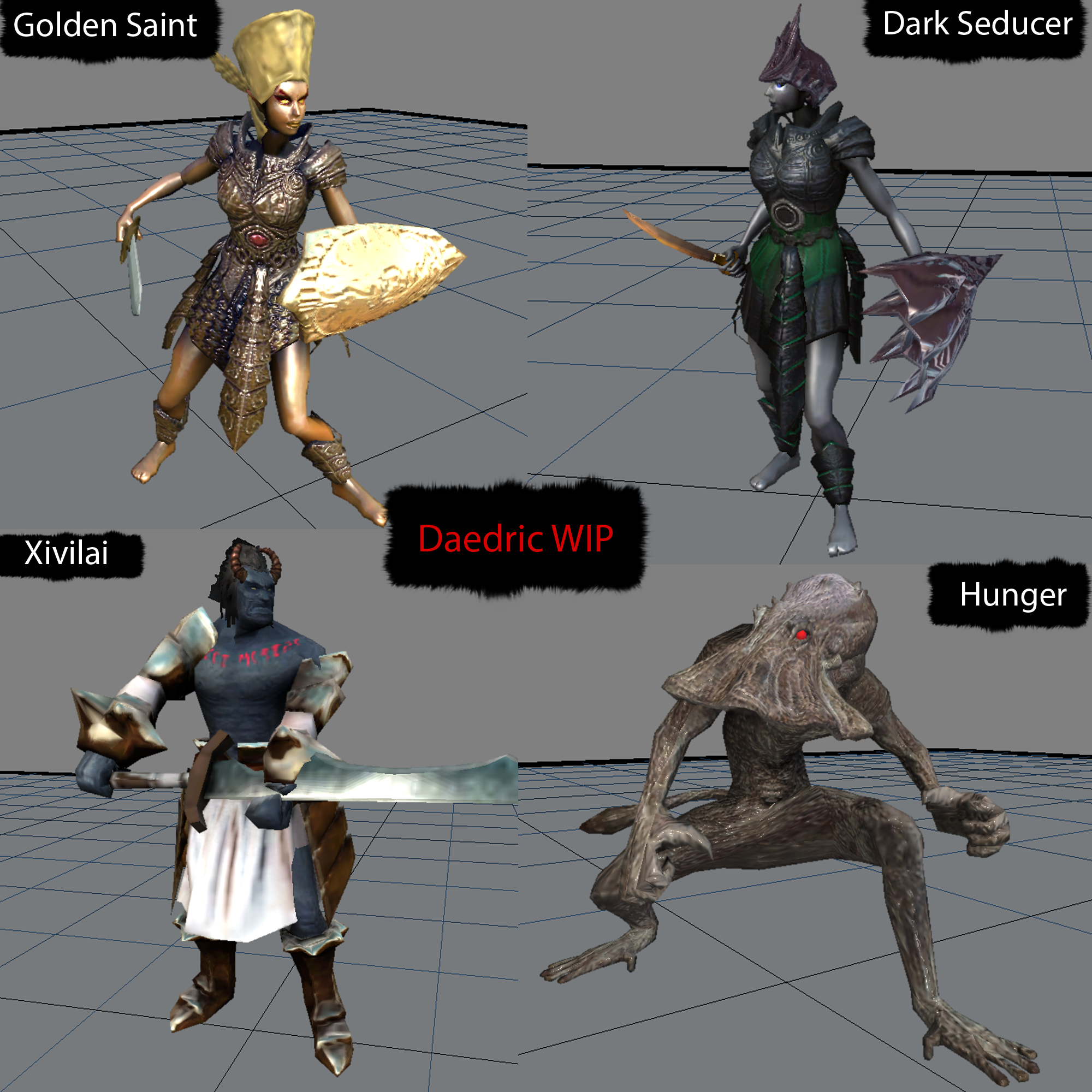 Gotten a bit worn out on the project again and am contemplating putting it out with a different, smaller scale map of one of the provinces just to get the ball rolling.
But still quite a while off from that point.

Oh, and in case anyone wants to talk lore problems of the project, I've created a separate thread on the Bethesda Elder Scrolls Lore Forums.