I apologize if this is the wrong location to post this!

Thought you all might be interested in a bit of quick art I made. This was inspired by thoughts on steel helmets in the Second American Civil War and how the sides might differentiate themselves. I concluded that the Philadelphia factory would likely begin producing one of the best helmet designs of the early 20th century (the American Model no. 5) and, being a Syndi area, this would be the CSA helmet.

Note that I created none of the flags! They seemed some of the best I came across on the web. The PMP-1 is likewise not my idea, but was lifted from Giotin's post.

Head protection typically came in two varieties - those supplied by fellow Syndicalists of France and those manufactured in Philadelphia by the Hale and Kilburn Company. The old 'doughboy' helmet was abandoned early due to its use by the Federal American forces as well as potential enemy Canada and New England. The Adrian, mostly imported from France, began the head protection of the CSA forces but was eventually surpassed by the domestically made Tricorner Helmet, as the Halte and Kilburn Helmet came to be known due to a (minimal) resembles to the tricorne helmet - mostly due to its point/peak at the front. This also gave the helmet a nominal connection to Revolutionary America, an homage from this Second American Revolution.

The Hale and Kilburn Helmet aka Tricorner helmet aka HK helmet:

The Tricorner, or HK Helmet, was among fifteen helmet prototypes developed by Bashford Dean in 1917 and 1918 in the Armor Shop at the Metropolitan Museum of Art for the US Government. The American higher ups, though not involved in the Weltkrieg (World War), observed the goings-on in Europe and the development of steel helmets there and determined that it would be reasonable for America to develop its own helmet. The helmet that would become the CSA HK or Tricorner was known first as the Model No. 5 and was considered by Dean to be the most successful in terms of its defensive qualities, functionality, wearability, and practicality for mass production. The Model No. 5 was ultimately rejected by the US army because its appearance was said to be too similar to the German helmet and not dissimilar enough from the British helmet. The US army instead went ahead with a mass order of Mark I (aka Brodie Helmet) helmets via the United Kingdom and Canada - principally under the thought that the US might at any time become involved in the Weltkrieg. It turned out to not be so and the World War ended without American involvement and with a German victory. The US army put steel helmets on the backburner and instead held onto the Brodie helmet, manufacturing American variants for their soldiers.

The Model No. 5 made its comeback with the arrival of the Second American Civil War (Second American Revolution in Syndicalist lingo). The Philadelphia factory still had several thousand specimens that had been manufactured for the US government, now sitting idly. With Philly a Syndicalist hotbed, the local militias and National Guard began equipping themselves int he Model No. 5 along with the imported Adrian's from France and, for a time, Federal Brodie helmets. It wasn't long before the Brodie was abandoned due to the confusion with their enemies and the Philly factory began producing the Model No. 5 again, becoming the ubiquitous CSA helmet. 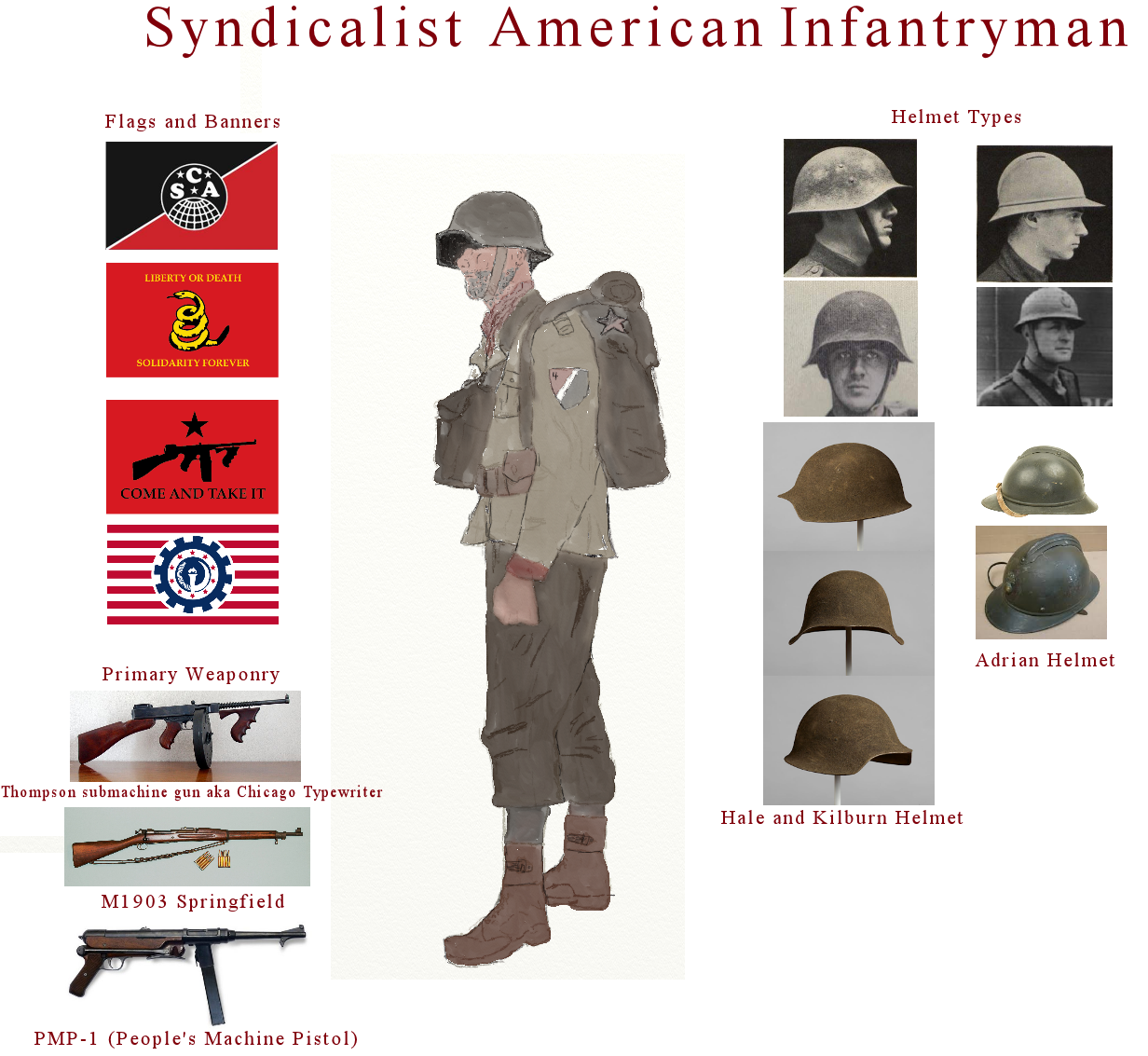