Jump to latest Follow Reply
Menu
Install the app
You are using an out of date browser. It may not display this or other websites correctly.
You should upgrade or use an alternative browser.
Surviving Mars 1537 Bug Reports 2406 Suggestions & Feedback 893 Modding & Resources 278 Console Edition 127
Show only dev responses

Sponsor Goals - Each sponsor now provides a set of five unique goals. Completing those goals awards various rewards – from Funding and Applicants to free prefabs of Domes and even free Rockets.
The five goals have varying difficulty and can push you to play in a specific direction if you want to get their reward quickly. The more difficult sponsors have tougher goals which sometimes even have a time limit.
Sponsor goals are an improvement and an overhaul of the current Mission Evaluation mechanic which is retired with the update.

Events – Events are story elements that depict different situations arising in the colony and will play out randomly as your colony grows. Sometimes there will be difficult decisions to make, and sometimes your choice of Commander Profile and Mission Sponsor will affect the decision options you have.
There are more than a hundred Event chains, each telling a different story of life on Mars, with more than 250 individual Events. Perhaps a Dust Storm caused a major malfunction in a Fusion Reactor, or a Renegade sabotaged the launch of a Rocket returning to Earth... Once in a while it’s just interesting to see how people may relax and have fun on the red planet.

Planetary Anomalies and Expeditions – Martian Anomalies are no longer found only in your sector – now you can discover them all over the planet. To analyze such a planetary anomaly, you will need to send a rocket to its coordinates on Mars. You will also need Drones, Rovers or Colonists for the expedition. Planetary Anomalies can yield research points, new Techs and Breakthroughs as well as resources and offer bigger rewards than Anomalies in the immediate vicinity of your colony.

Supply Pods - You may need an urgent delivery from Earth every now and then, and your rockets can be on the far side of Mars now. Supply Pods are one-use delivery space vehicles that can transport a limited payload from Earth. They are faster than Rockets and can land in any conditions, even during Dust Storms, but incur $100 M extra cost on launch. Also, they can be salvaged after crash-landing.

New Points of Interest in your sector – new "Research site" and "Vista" locations can be now discovered in your sector map. They boost comfort and research (respectively) in nearby buildings and domes; they are revealed when a sector is scanned; those locations are randomly placed but depend on visible terrain features

Sponsor Logos – a set of new sponsor logos, based on the national flags of the sponsors

Fix for factories to update Production per sol in real time
Fix for "Charge" hint for RC Generator (fixed both description and controller shortcut)
Fix for closed solar panels to not accumulate dust
Fix for the timer of completed challenges - in-game
Fix for RC Transport route creation when using overview map
Fixes for manual control over a Drone for cable/pipe construction, RC Transport unloading, construction site clearance
Fix for misleading text for pause/unpause
Fix for game freeze when packing numerous drones over short period of time
Fix for colonists migration and job allocation between connected domes - colonists now check if working in connected domes is forbidden when searching for a new dome
Fix for load/unload functionality of RC Transport
Fix for construction process to properly clear construction site when construction is on the edge of construction range
Fix for occasional overlap of buildings
Fix for passage placement to limit some invalid passage positions
Fix for cable placement when outside of drone hub range, which shows cable lines in unbuildable places
Fix for auto-pin option for exceptional colonists
Fixed controller button info when using rename feature
Fix for Crystals in Philosopher's stone mystery, to no longer spawn with a dome base
Fix for Waste Rock Processor model, now does not intersect with pipes
Fix for metal deposits placement to avoid inaccessible locations
Fix for rocket launch failing because of disembarking transport
Fix to keep new deposit positions fixed to map seed
Living Quarters renamed to Living Complex to reflect building sizes naming convention
Fix to remove concrete terrain once a concrete deposit has been depleted
Fix to prevent drones being assigned to destroyed commanders
Fix for drones idle movement while waiting to recharge
Fix for Research screen tooltip to update cost for repeatable techs in queue
Fix to allow sending an empty passenger rocket from Earth (also added a warning)
Added on-screen notification for destroyed buildings
Updated upgrade rollover text to show available resources
Fix for scaling of particle of anomaly scanning
Fix for construction rover to properly utilize/deal with resources on construction site
Fix for loss of control when performing quick actions in the build menu with a controller
Fix for Dome infopanel to better communicate comfort issues
Fix for follow-up camera when units disappear
Fix for setting traits in School/Sanatorium
Fix for pathfinder, reported as automated rover not responding
Removed old mission evaluation system and related notifications when loading pre-Gagarin saves
Tutorial 3: added shield against player spending all money and unable to continue a tutorial step
Various performance optimizations

Does it also fix it getting stuck when you click on the pinned icon for an orbiting rocket?

Edit: Yes it does

OMG. I'm so excited to try all the new features.
P

The events sound great, but is there a way to turn them off? The event ui on Xbox is broken and blocks progression.

This is from one of my bug reports, isn't it?
Well, the monument will remain as long as my save-file exist.
Behold!

This was mentioned briefly in diary, but not in update notes so: You now have building colour schemes (HUD buttons>command centre>building colours), some sponsors have new schemes by default. You can switch back to original colour scheme, or grab edited ones by modders (soon).
Toggle signature
Expanded Cheat Menu, Log Flush, Modding Discord, Mods: Steam, Nexus, Paradox, Github

KvaGram said:
This is from one of my bug reports, isn't it?
Well, the monument will remain as long as my save-file exist.
Behold!
Click to expand...

So that must be what happened to my passageway! This was a Black Cube mystery play through. 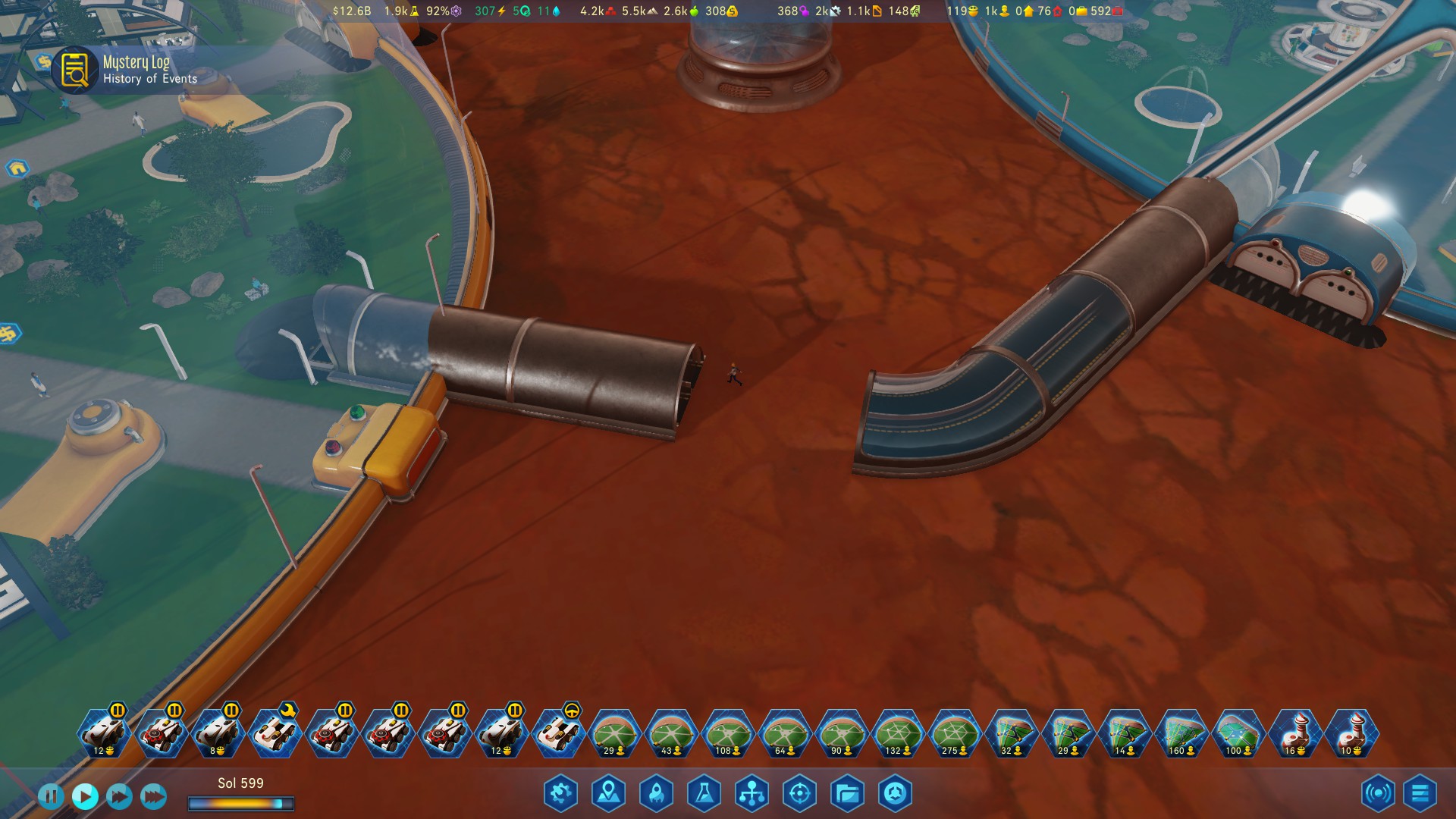